Comic Book Origins: Scarlet Witch wasn't originally part of the Avengers, but rather the X-Men in the comic books. Her first appearance was one of the first X-Men issues where the original team of X-Men were training and learning from Professor Xavier. Meanwhile, Scarlet Witch was part of another team of mutants dubbed The Brotherhood of Evil Mutants, led by Magneto. In certain storylines, Scarlet Witch and her brother Quicksilver were actually the children of Magneto, which we've seen partly in some of the recent X-Men movies, however this is not mentioned or discussed in the Marvel Cinematic Universe as Fox still controls the X-Verse films (though this will likely change as Disney is in the process of acquiring Fox). With X-Men #4 though, The Brotherhood is having dinner when another mutant makes a pass at Scarlet Witch, which she refutes. 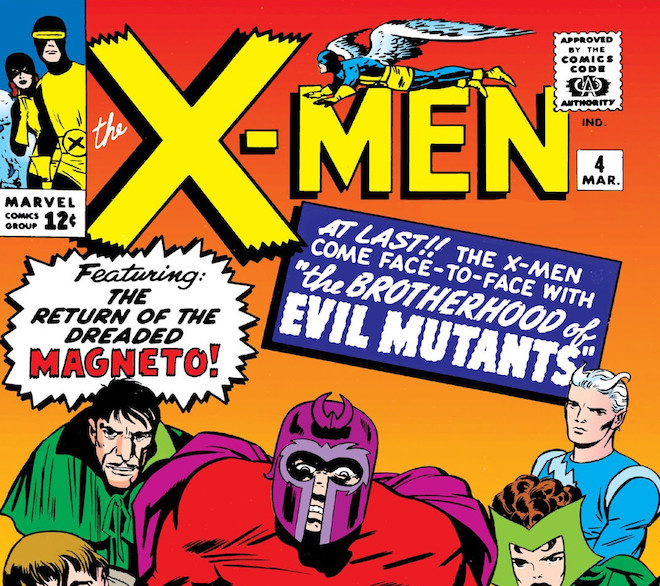 This mutant then threatens her, only to have her brother Quicksilver protect her. Later on, the twins tell Magneto they don't want to be part of his team anymore, to which he says they owe him a life debt for saving them years earlier. Magneto then heads with his Brotherhood to South America to take over a small village when the X-Men show up to stop them. Quicksilver and Scarlet Witch end up saving the town by disarming Magneto's bomb and saving Professor Xavier's life in the process. In other versions, the siblings were kidnapped and genetic experiments were performed on them, too, but that's not really the case here.

Marvel Cinematic Universe 1st Appearance: Captain America: The Winter Soldier (April 4, 2014 - Directed by Anthony and Joe Russo) - Scarlet Witch's first appearance in the Marvel Cinematic Universe was actually a post-credit sequence in The Winter Soldier, where Baron Wolfgang von Strucker has Loki's scepter at Hydra along with two young siblings that have superpowers, being super-speed and telekinesis (Scarlet Witch and Quicksilver). However, it's not until Age of Ultron, where we actually see Scarlet Witch in live-action, played perfectly by Elisabeth Olsen. At first, Scarlet and her brother are helping Ultron defeat the Avengers, but they end up joining the Avengers to defeat Ultron.

Best Scene Thus Far: Scarlet Witch hasn't had a ton of screen time compared to other Avengers, but her scenes are always excellent. I believe her best scene is in Avengers: Age of Ultron, when she realizes she can control her telekinetic powers and walks out of that war-torn building in slow motion and begins destroying all of Ultron's mechanical minions with ease. It's such a cool and satisfying scene after we've seen Scarlet have trouble controlling her powers. Not to mention her last encounter with Ultron, where she rips out his mechanical power-source/heart, is simply fantastic.

What To Expect from Infinity War: So we know that Vision and Scarlet Witch are basically dating and in the comic books, they end up married with children. That being said, and with Vision holding the Mind Stone (the one thing that Thanos wants to complete his gauntlet), Scarlet Witch might sacrifice herself in some way to save him, while using her powers to battle Thanos' army.

Also, we saw her brother Quicksilver die in Age of Ultron, however, it was discussed that there was a certain experiment that could regenerate people back to life. Since Elisabeth Olsen and Aaron Taylor Johnson signed a multi-picture deal for the MCU, I also expect Quicksilver to make a surprise appearance alongside his sister. With Scarlet's amazing telekinetic powers, she will be crucial to defeating Thanos and keeping the Mind Stone somewhat safe until all is lost.

Future MCU Appearances: So far, it's been revealed that there are no plans for a Scarlet Witch standalone film since Fox has the rights to the X-Men characters. It's all really difficult to see where everyone will end up depending on the whole Fox merger. Where Scarlet Witch is concerned, I'd like to see her still helping out in a major way in upcoming movies, but it looks like for now that after the Infinity War two-part movie is done, she might not have a big role in upcoming MCU films.

In Conclusion: Scarlet Witch is crucial to the whole Avengers family. She is the only one with telekinetic powers and could be the only person who could literally defeat Thanos. Elisabeth Olsen plays her perfectly as she has had to endure the loss of her brother Quicksilver, having no parents, struggling to control and contain her powers, as well as working with the evil Ultron at one point in time. She's had a rough life for sure, but she has overcome everything to be the superhero she is today.