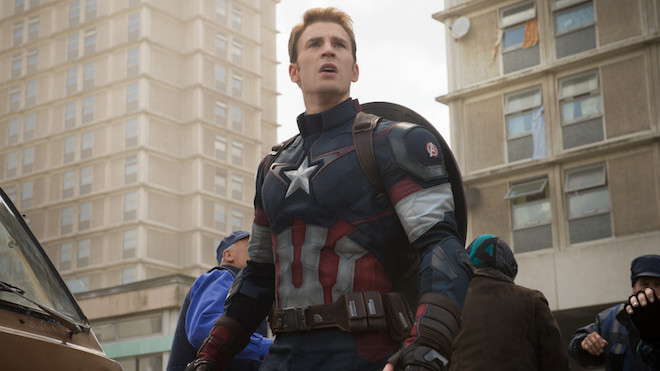 Comic Book Origins: Back in early WWII, we got to meet Steve Rogers/Captain America in his first issue, where some US government officials are meeting in a secret location that has been turned into a science lab. In this lab, a scientist says he can create an army of super soldiers with a new serum to help the US win the war. He injects the serum into a frail man, who then turns into a big musclebound super-human. 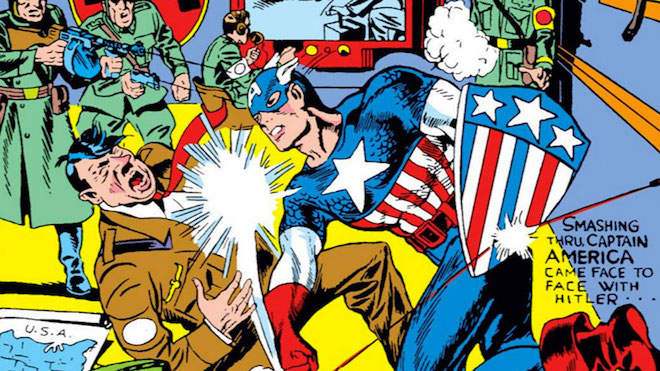 Right after this, the scientist and government officials are attacked by an undercover spy where the lab and serum are destroyed. However, Captain America makes it out alive and, while fighting the bad guys, crosses paths with a young Bucky Barnes, who witnesses Steve Rogers as Captain America, forcing Cap to take on Bucky as his partner.

Marvel Cinematic Universe 1st Appearance: Captain America: The First Avenger (July 22nd, 2011 - Directed by Joe Johnston) - Before we get into The First Avenger, I have to mention that we first hear about and see Captain America in 2008's The Incredible Hulk movie where Edward Norton played Bruce Banner/Hulk. There is talk about the super soldier serum throughout the film and it's even injected into the major foe of the movie. In an alternate opening to the movie, Hulk goes to the Arctic to kill himself and as the scene ends, you can see Captain America frozen in the ice under Banner.

Neglecting that aspect, though, the first time we see Chris Evans as Captain America is in his own film from 2011, where he is a very short and scrawny guy who, like in the movie Rudy, has a ton of heart but can't hack it physically on any level. All Rogers wants to do is join the army and fight for his country alongside his best friend, Bucky Barnes. When Rogers is permanently unable to join the army, a scientist takes notice of his bravery and heart and allows him to be part of this top secret experiment for super soldiers. This is where Rogers transforms into Captain America and fights the good fight.

Best Scene Thus Far: There are quite a few great scenes of Captain America throughout the films, but perhaps the best one takes place in Captain America: The Winter Soldier where Captain enters an elevator and has one of the best fight scenes in all of the MCU.

The scene starts off with Captain America entering a glass elevator, which is going to a high floor, when suspicious looking men enter the elevator. This happens three times as the elevator goes from just being occupied by Captain to being full of dozens of armed men. In this small space, a giant fight breaks out as Captain America uses his super abilities and even his shield in different ways to destroy everyone. It's perfectly choreographed and shot, and shows just how calm and collected Cap can be -- while being able to instantly turn it off and become a deadly weapon.

What To Expect from Infinity War: In Captain America: Civil War, we see Captain losing control of his team. It's not a good place to be when he has to face Thanos. At the end of Black Panther, too, we see Bucky Barnes in Wakanda as Shuri wakes him up. Remember that, in Civil War, Black Panther promised Cap he'd take care of Bucky and heal him, which it looks like Shuri did. In the trailer for Infinity War, we see Bucky, Captain, Hulk, Black Panther, and Black Widow leading the charge in a big battle against Thanos and his minions.

Future MCU Appearances: As of now, there are no plans for a 4th Captain America film, at least not with Chris Evans. I'm sure we will see him in some capacity in the second part to this upcoming Avengers film, but unless the planets align, I think Captain America will be taken over by Bucky Barnes at least for a while until they find a way to clone or bring back Steve Rogers.

In Conclusion: Steve Rogers/Captain America has always been the rock behind the Avengers. He's the leader and the one you can always count on. He's also been around the longest, too. I think Captain America will pay the ultimate price coming up with Avengers: Infinity War. It's going to be an emotional time for Marvel fans everywhere. Chris Evans has succeeded in playing this straight-laced father figure to the group perfectly, which I hope he gets to do so in many more future MCU films, because I'm not ready for this character to go away yet.