Momentous changes are afoot. After years (decades, honestly) of apartment living, Mrs. Z and I have finally bought a house. We closed on the purchase a couple weeks ago and will move in January. In the meantime, the place needs some work, including an electrical overhaul and, of course, the conversion of its basement rec room into a proper home theater. This is where the hard part begins.

We purchased an older home, built in 1940. The electrical system is antiquated and needs a lot of work, but the house is structurally sound and otherwise in good shape. Naturally, when searching, one of my biggest and most important criteria was that the house must have a good space for my home theater, preferably a finished basement. The one we settled on has a pretty spacious rec room in the basement. Unfortunately, the room was finished in the 1950s. Both for aesthetic and pragmatic reasons, it will need some renovation before I can use it for my needs.

It turns out that the house has some character and history behind it. The former owner (now deceased) was a friend of John Huston, director of ‘The Maltese Falcon‘, ‘The African Queen‘ and other classics. He apparently spent a bit of time drinking bourbon in the very room that will be my home theater. That’s pretty cool.

First, here’s the general layout of the space. The areas highlighted in yellow are two proposed locations for my projection screen. Each has its advantages and disadvantages. 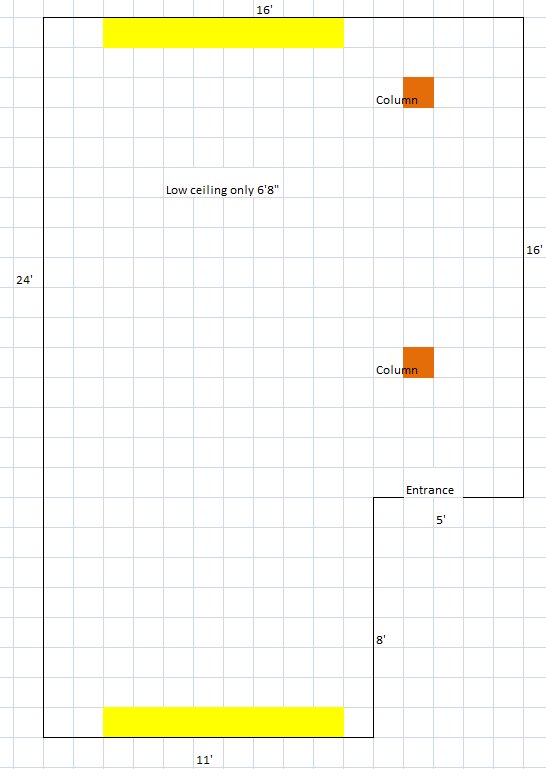 As you can see in the following photos, the room looks a little tacky right now. I don’t really care for its wood paneling or that ugly green tile floor. It’s also an acoustical nightmare, with echoes everywhere. I plan to pull down the paneling, install soundproofing insulation and cover the floor. 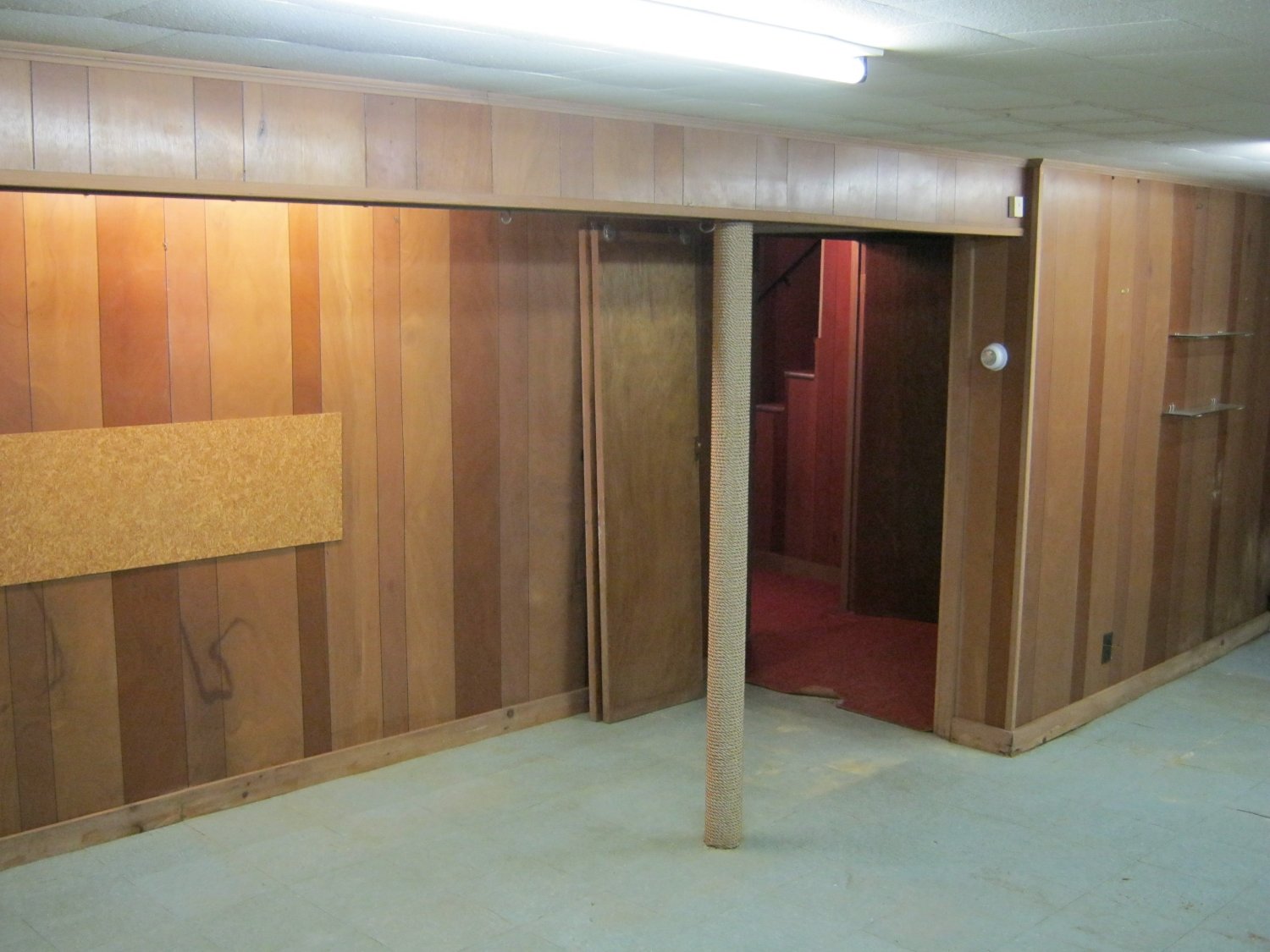 The ceiling is frustratingly low, and there doesn’t seem to be anything I can do about that. I’m going to pull down these hideous panels, but will have to replace them with something better looking at the same height. The fluorescent lights will definitely be replaced by recessed lighting. That will help a little, I suppose. Nevertheless, mounting a projector on the ceiling may be an issue. 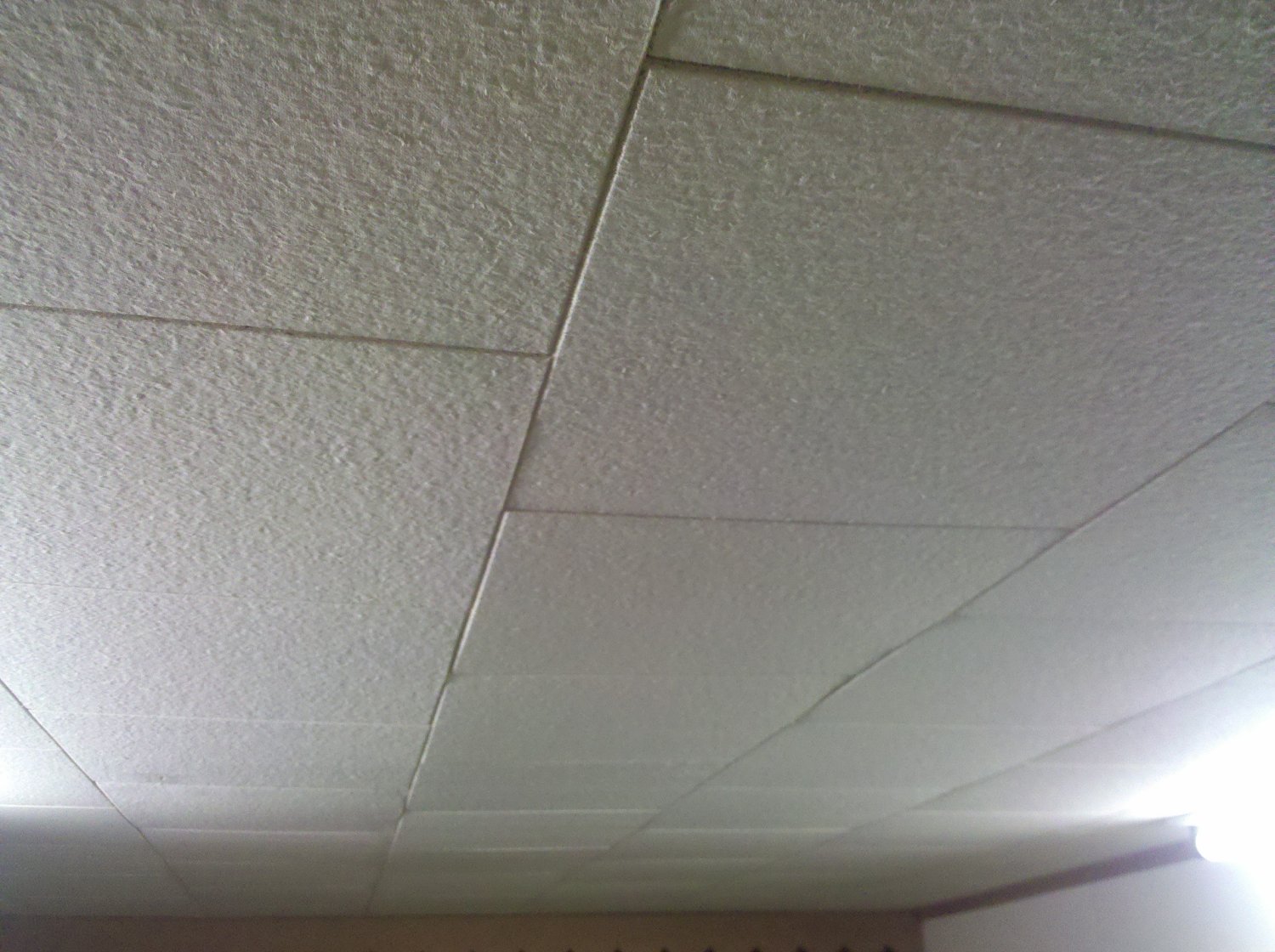 Upon entering the room, I’m immediately drawn toward the area seen at the bottom of the floor plan. This seems like it would be a natural location to put the projection screen. 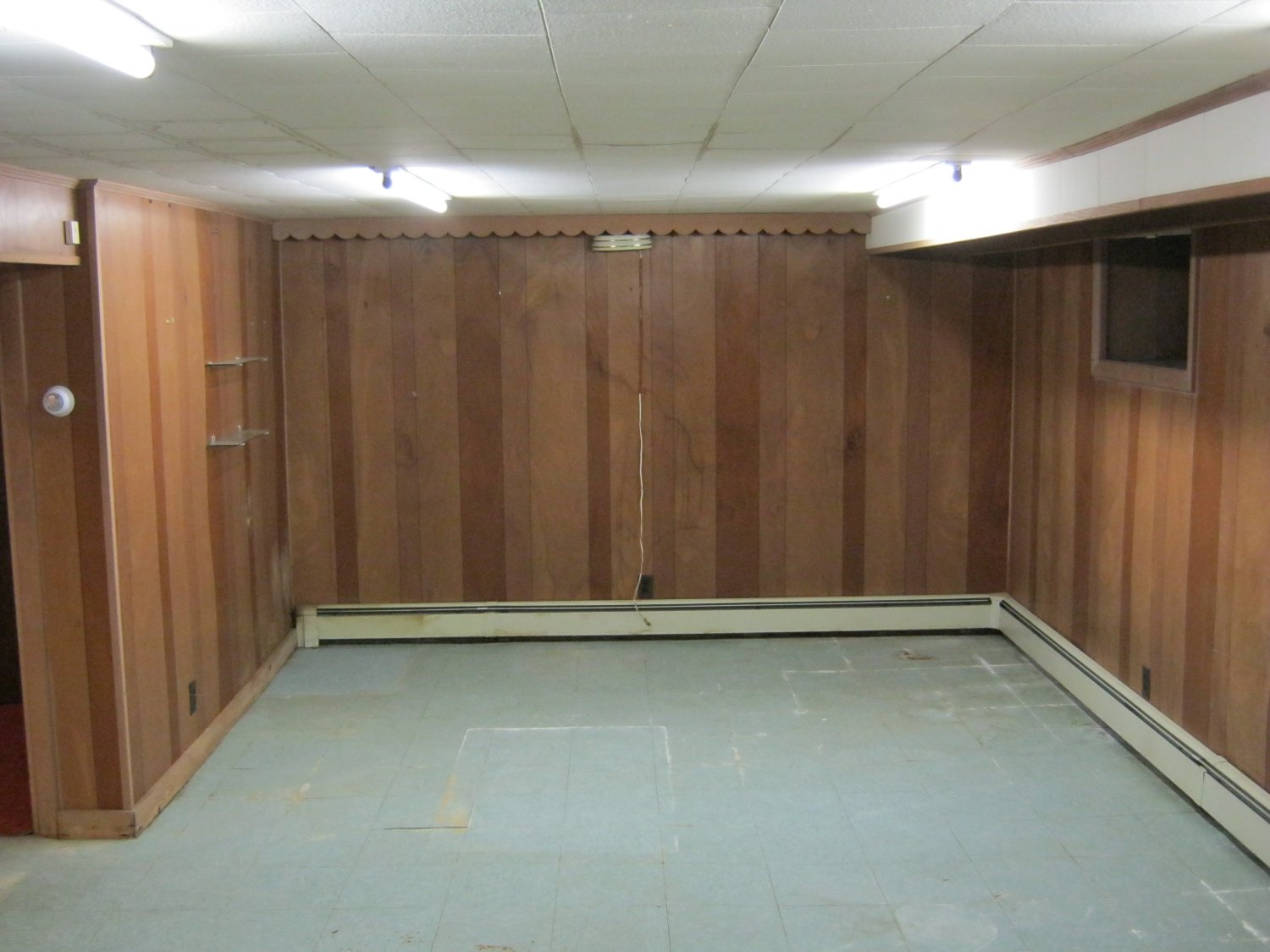 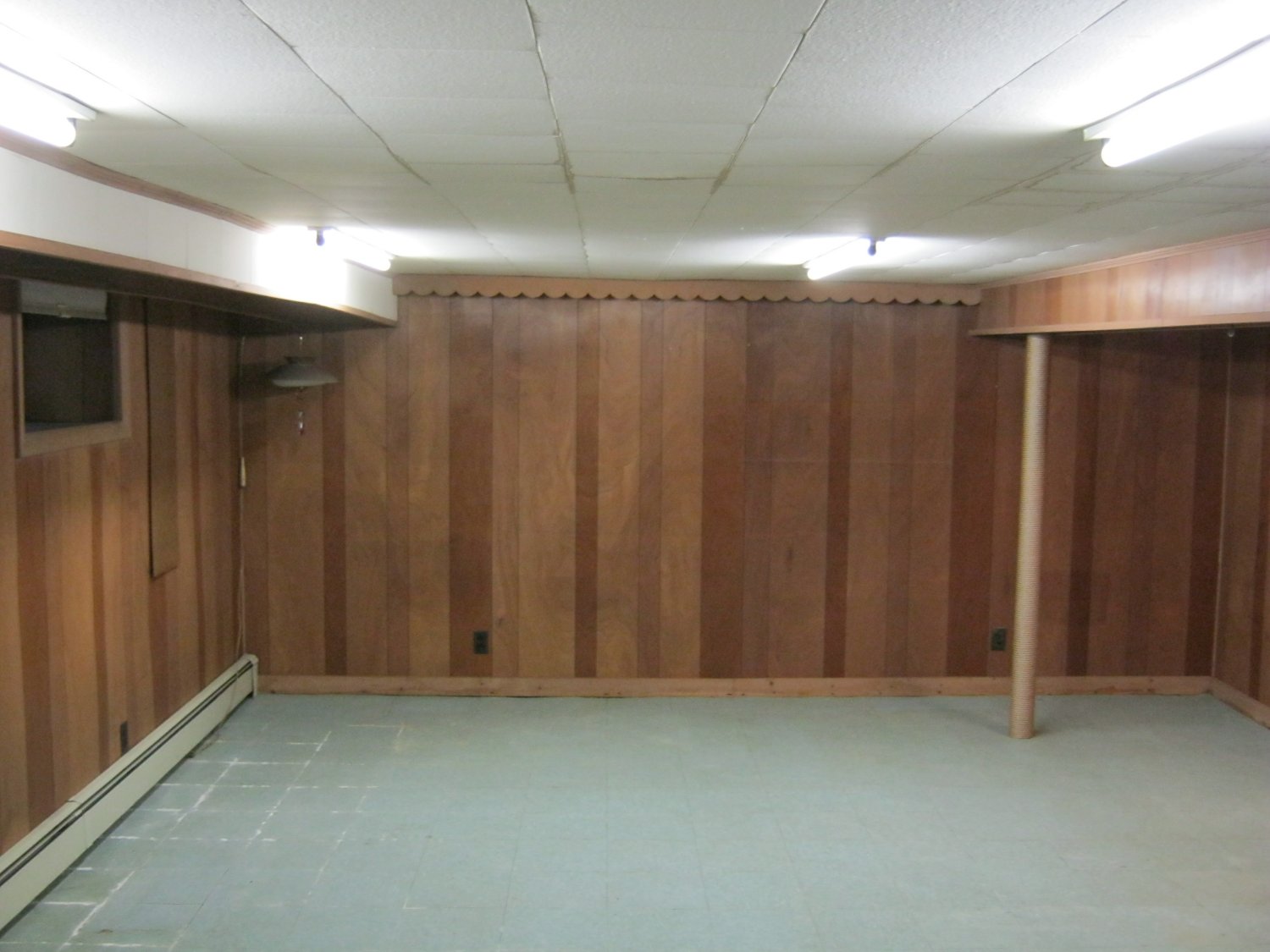 It may seem a little lop-sided right now, which might create an unbalanced soundstage, but I can envision putting my equipment rack in the alcove area to the side, and enclosing it with a sliding partition. That would give the screen better symmetry, and would be a much more convenient location to store my disc players, A/V receiver and other gear. 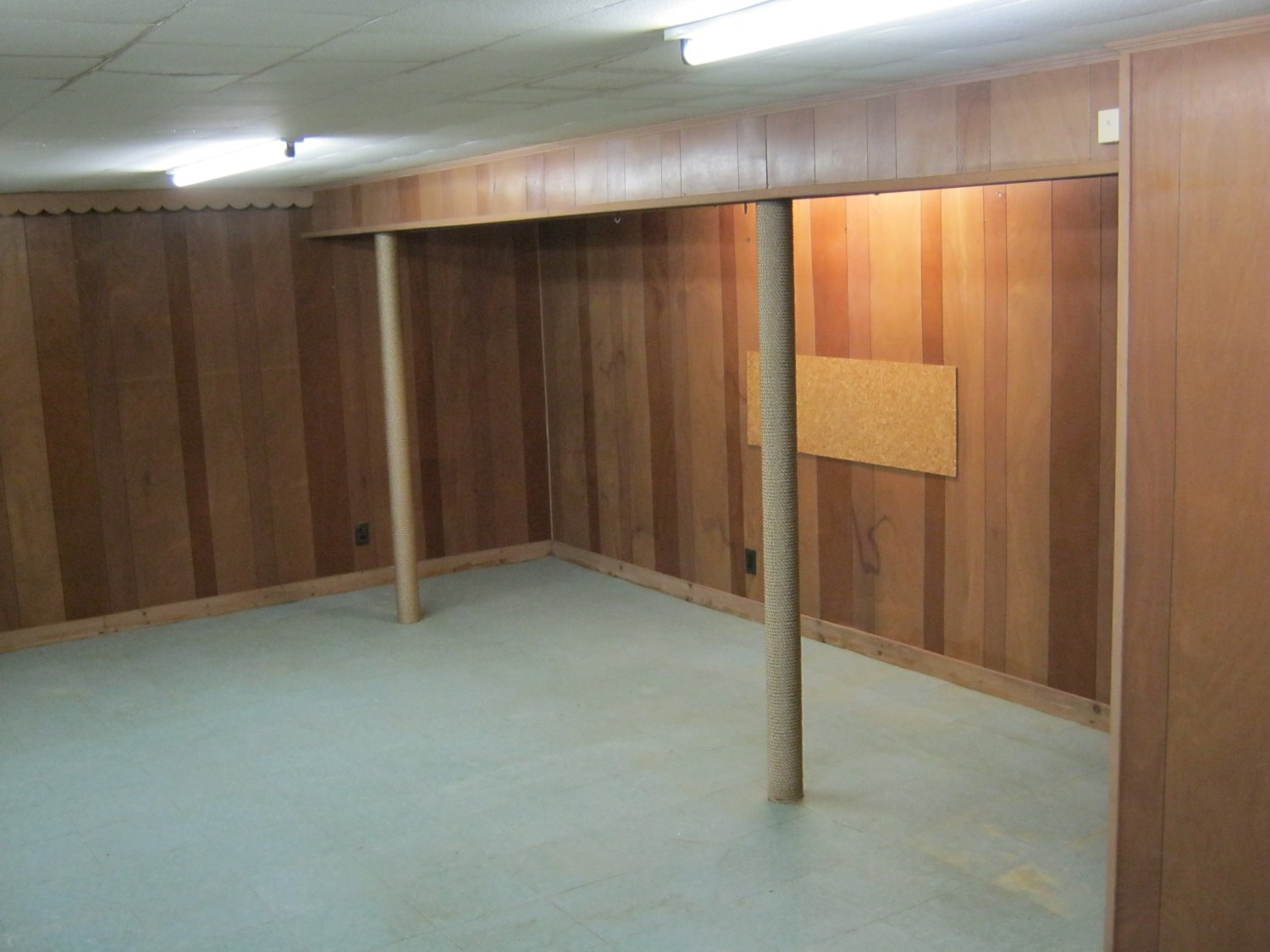 Then I could use the back end of the room for media shelving and an office space. Something like this: 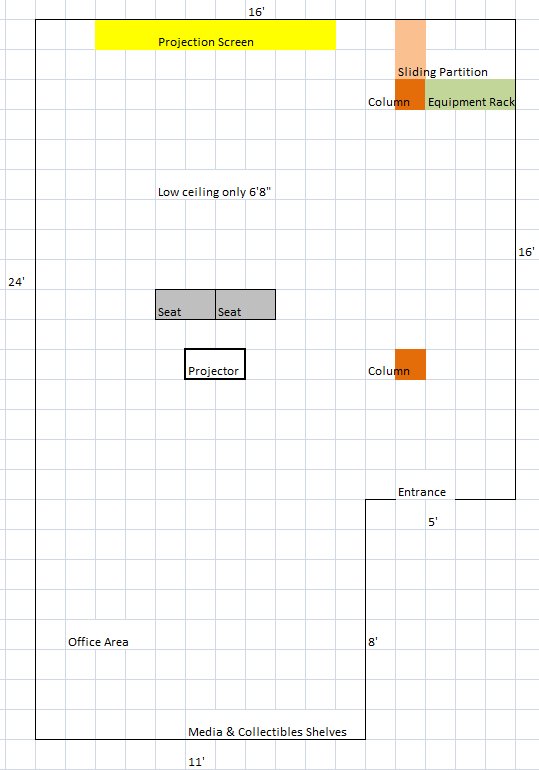 Some of this is a little difficult to visualize right now, but the plan is starting to come together in my head. Next step: Finding some good contractors. Ideas and recommendations are welcome.

I could especially use some some suggestions for media/disc shelving. If you have or have seen things that you like (either pre-made or custom), please post some links in the Comments below.

More to come as the project gets underway!