It’s been a while since I’ve provided an update on my home theater construction project. Quite a lot has happened since I last documented my progress, but I haven’t had the time to write about it. I don’t think that I’m ready to reveal the finished theater just yet, but I can show you some of the work that’s taken place in the meantime.

As those of you who’ve followed me on this journey may remember, I last left this tale in a state of disaster. The beautiful finished theater room I’d constructed in my basement had to be torn up to repair a broken pipe behind the wall, which had flooded the back of the room and destroyed the brand new carpet I just put down literally one week earlier.

Well, we (and by “we,” I mean my plumber) got the pipe out. You can see the giant crack in this photo. It’s ugly. 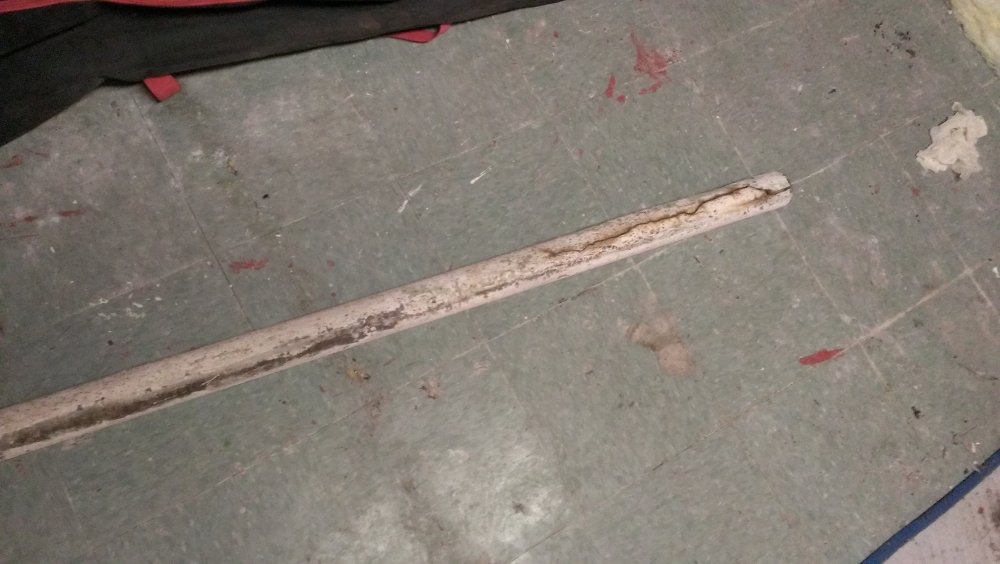 Fearing that the rest of the old plumbing in the house is probably in a similar condition, I was forced to make a difficult decision and take some drastic actions to make sure this doesn’t happen again in another part of the room.

Originally, the pipe ran down the back of the wall from the kitchen upstairs and connected to another pipe under the floor. Because I don’t trust the condition of that lower pipe, I elected to bypass and abandon it altogether. We capped it off and redirected the kitchen line to turn and run a new pipe behind the wall towards the front of the room, where it will connect to the sewer drain-out in the boiler room beyond my theater. 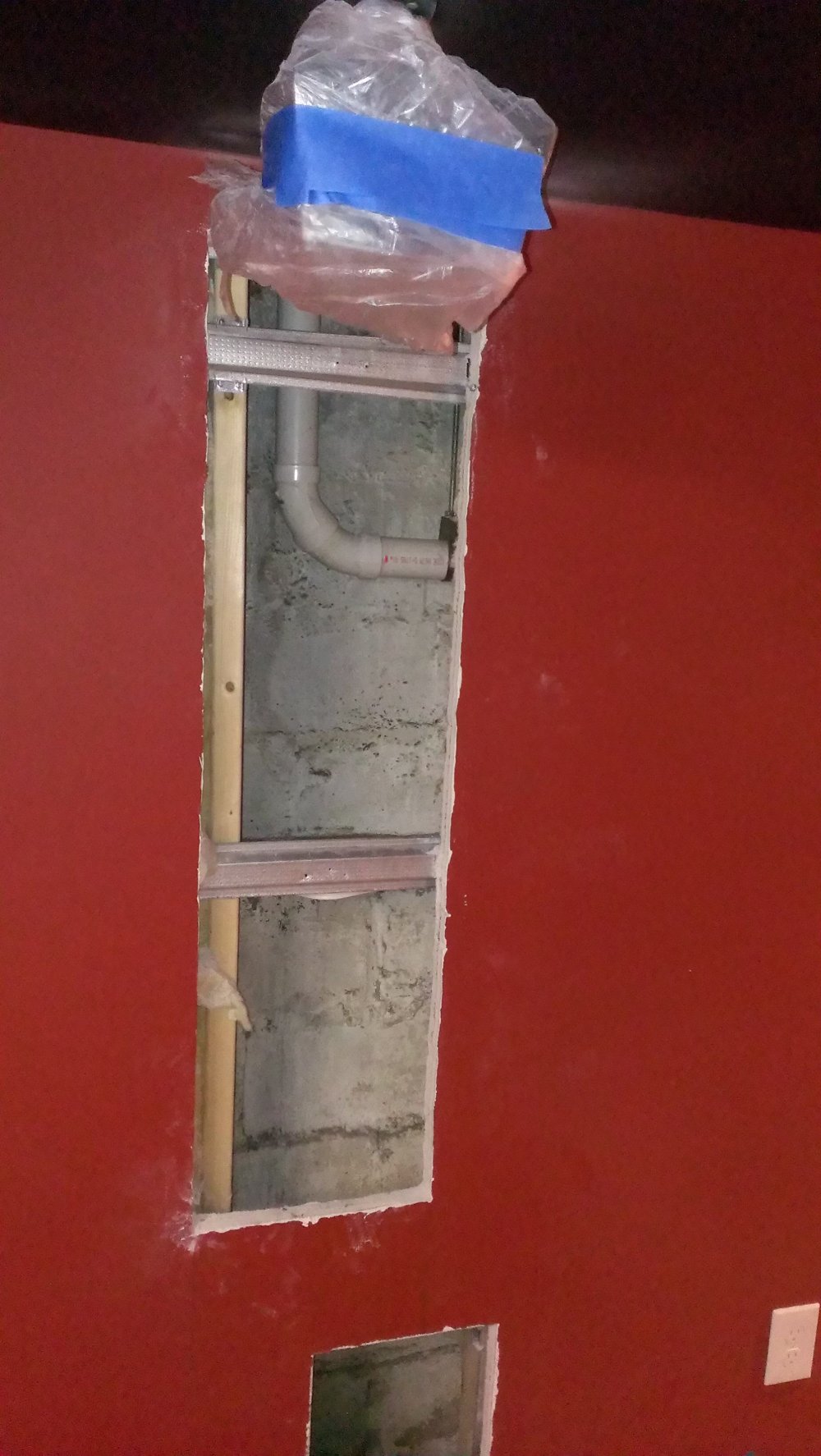 In order to run that pipe, this meant cutting two more big holes (for a total of three, plus a smaller access panel) in my lovely, freshly-painted, double-drywall soundproofed wall. I was heartbroken to have to do this. 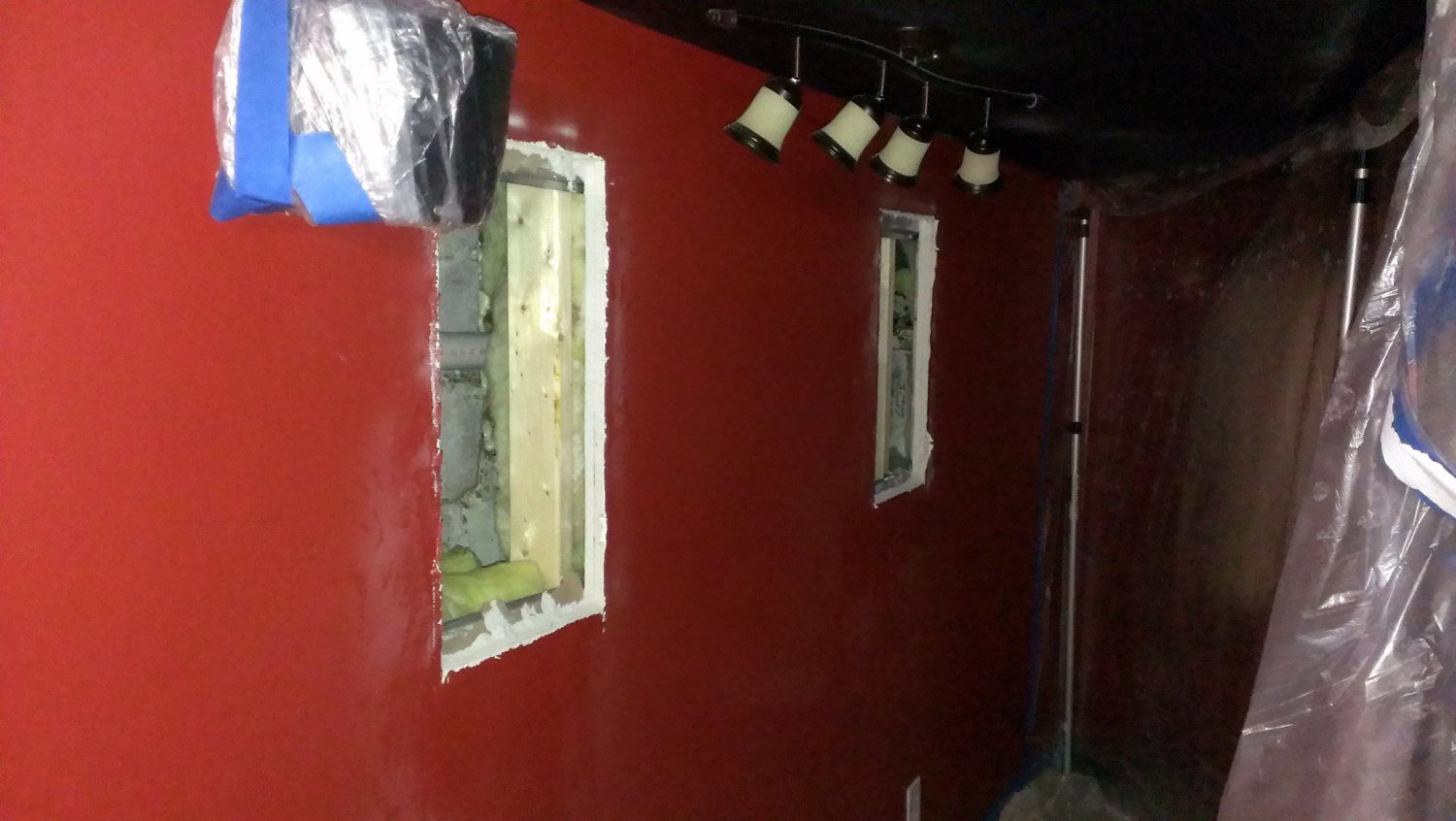 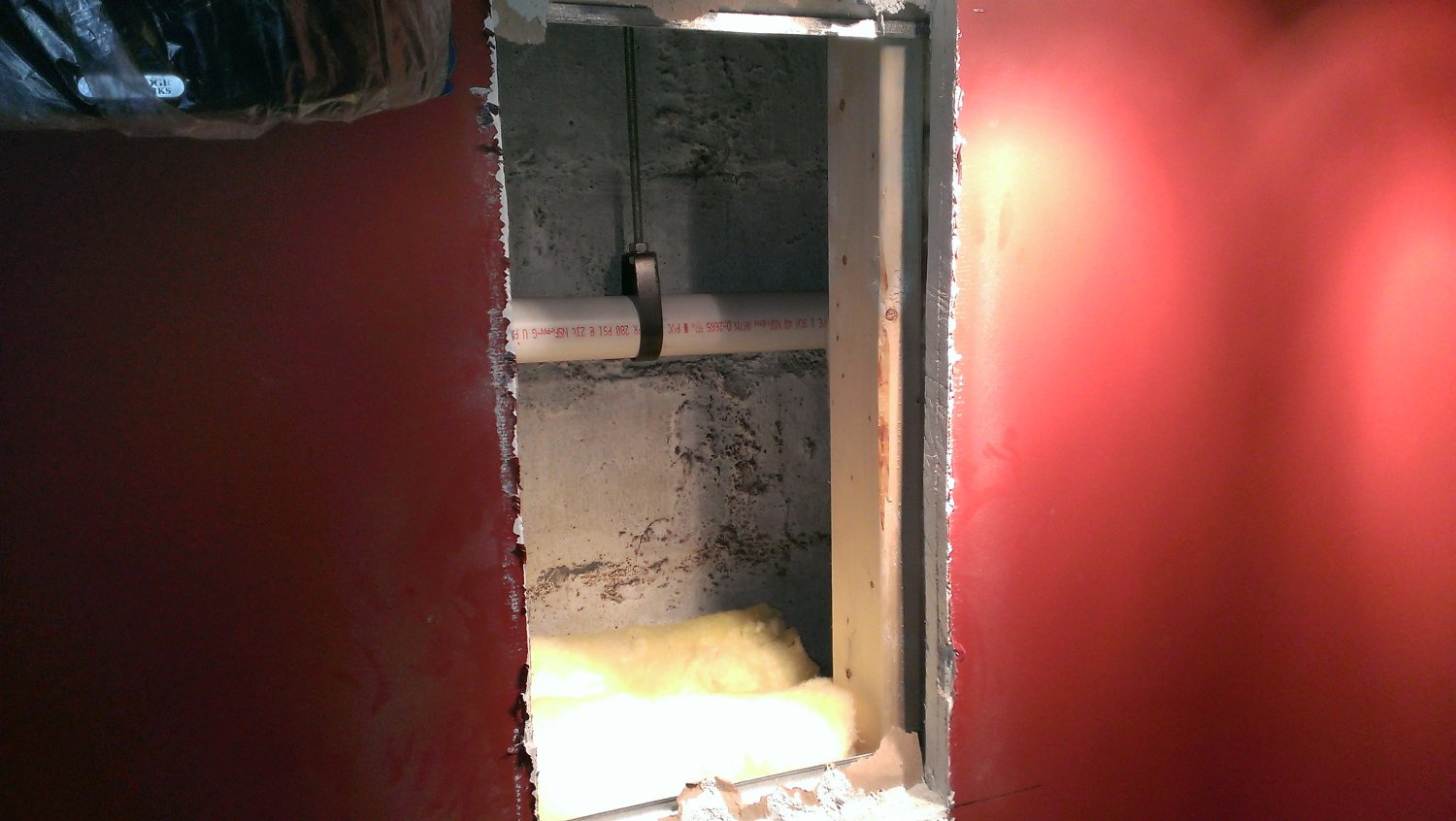 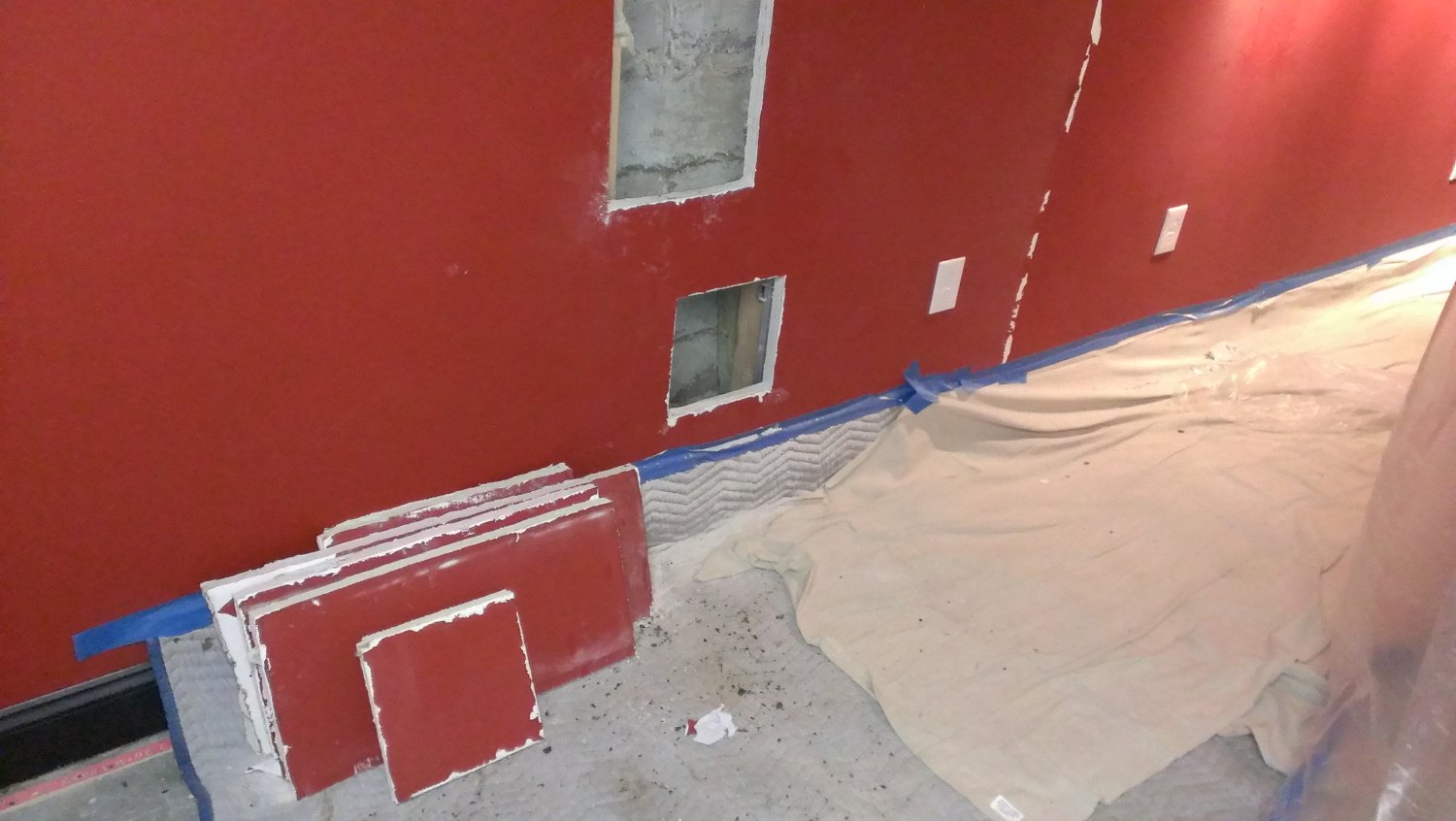 This is on top of having to trash the carpet in the entire back half of the room.

While the plumbing was being repaired, we had no water in the kitchen, and had to wash all of our dishes in the laundry room sink.

Our plumber does good work, but this was a big project and took some time. Once he was finally finished, we regained use of our kitchen again, which was a big relief. However, the theater project stalled for a time due to money (I’d long since blown my budget, and insurance only covered a portion of the expenses) and scheduling issues with my contractor. As a result, the room sat in disrepair for much longer than I wanted. To be honest, I had a hard time even going into the room. Every time I stepped in there, my heart sank and my ulcer flared up. I couldn’t even bear to look at it. I wanted nothing to do with the room while it was in this condition.

Thankfully (!), the repair work eventually resumed. First, my contractor’s plasterer patched up the holes in the wall. 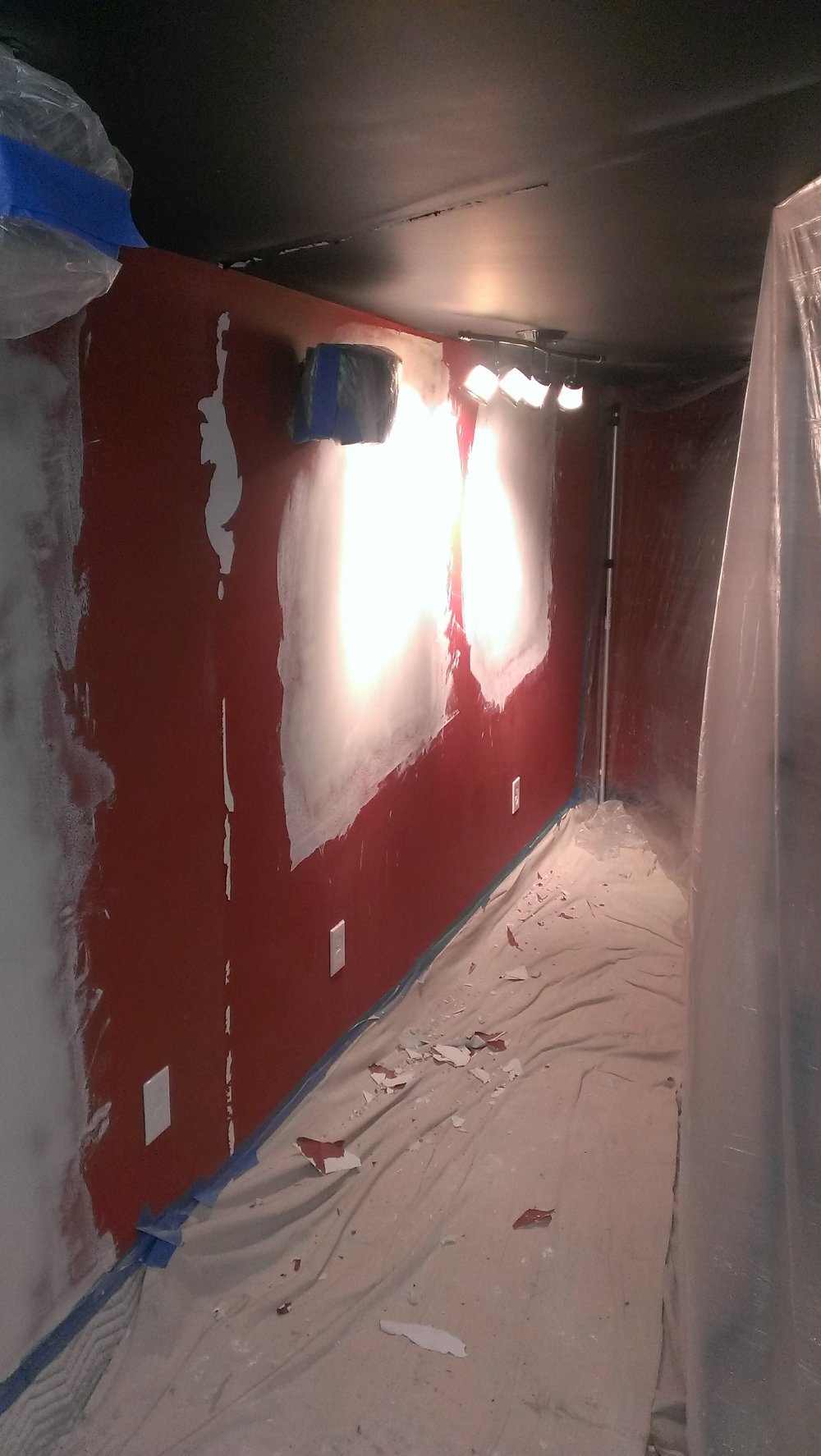 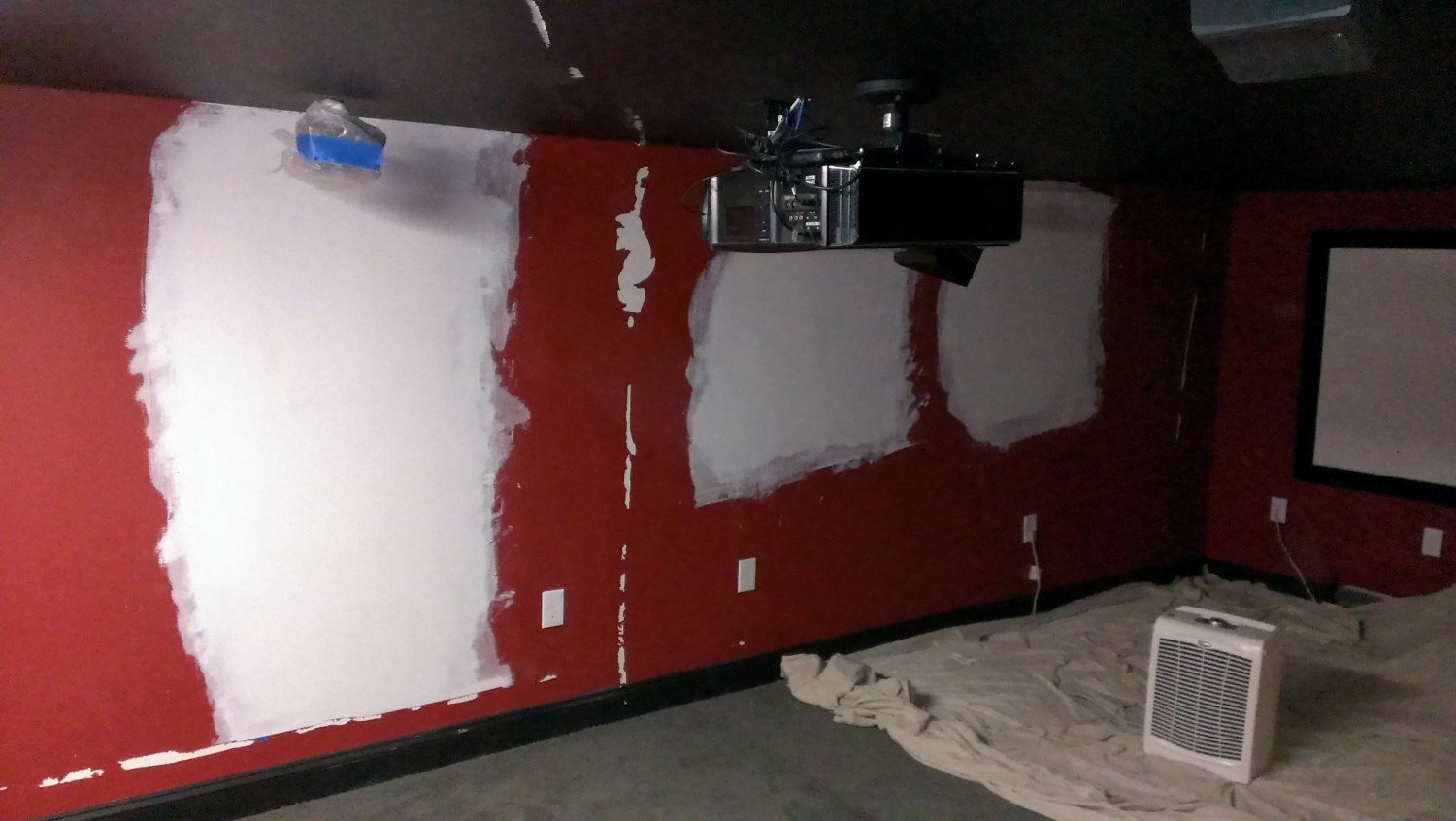 Then I had the carpet replaced. Of all things, this actually felt like the biggest hurdle to overcome. Once the carpet went back in, the room started to feel like a usable space again, not just a huge money pit under my house. I finally felt some sense of progress being accomplished. 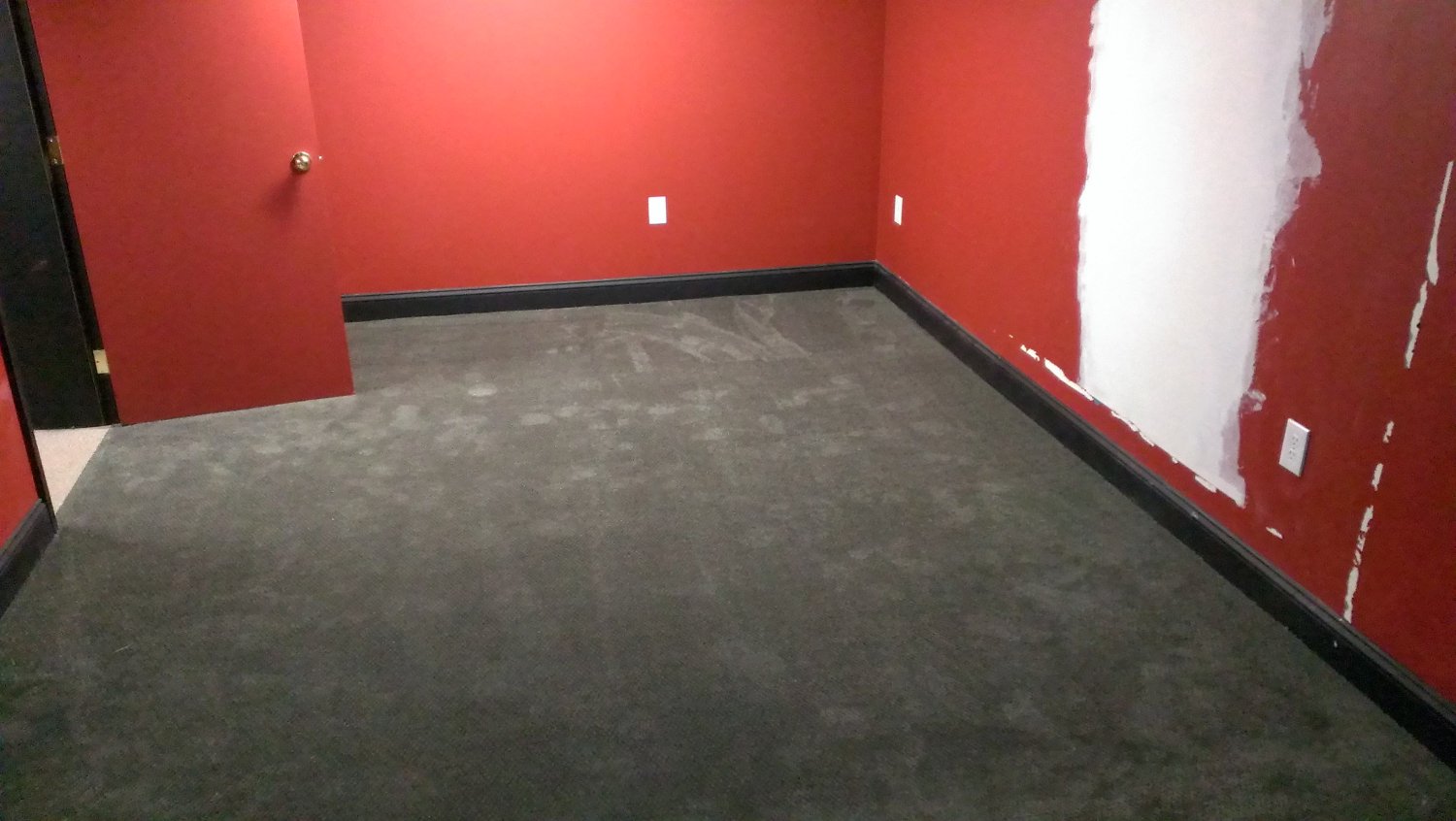 Next, I’d have to repaint. To ensure an even color, the entire wall would need to be repainted, not just the replastered parts. Further, all this repair work had caused additional paint damage on my ceiling. 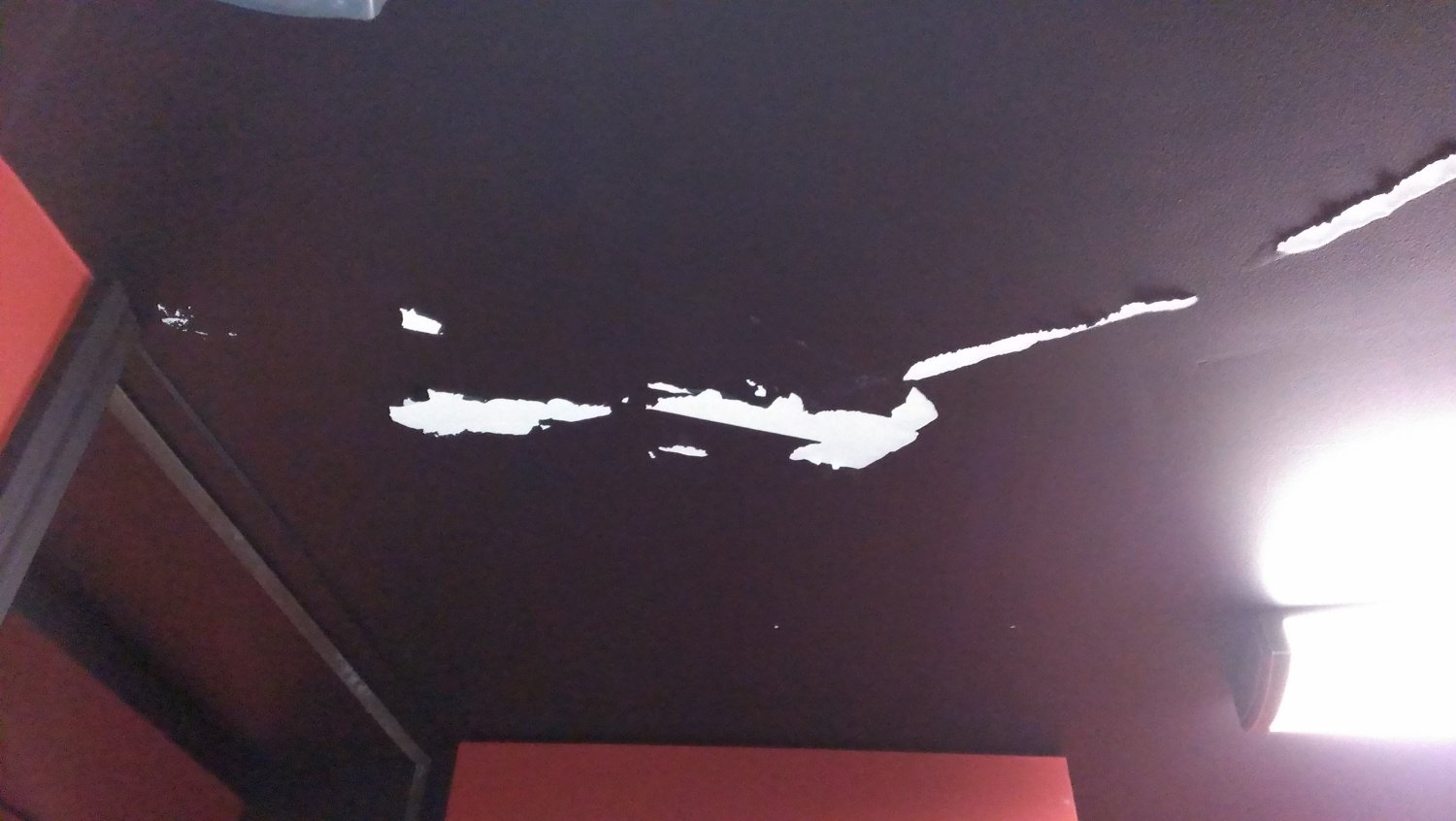 You see, the package deal I signed up for with my contractor included painting from a subcontractor. This was the only aspect of the original construction that I was dissatisfied with. Although the paint job initially looked good and I was pretty happy with the way the room turned out, I later found out (from another professional painter) that the walls and ceiling had been painted too soon after construction. They should have waited a few weeks for the plaster to fully cure.

To be fair, being ignorant of such things, I was in a rush to complete the room, and the first painter was merely meeting my timetable. However, if he had at least said something, I would have made the decision to wait and do it correctly. But he didn’t.

Why was this a problem? Because the plaster wasn’t completely dry, the paint didn’t adhere properly, and is very prone to chipping and flaking at even the slightest nick or ding against the walls or ceiling.

I’d already noticed a few small issues that I needed to touch-up myself before the plumbing catastrophe. When doing his repairs, my plumber strung a plastic tarp across the room to protect the undamaged carpet, furniture, and my home theater equipment. He attached this to the ceiling with standard painter’s tape. If the room had been painted correctly, this shouldn’t have been at all an issue. Unfortunately, because it wasn’t, the paint peeled right off in a nasty strip when we took that tarp down. 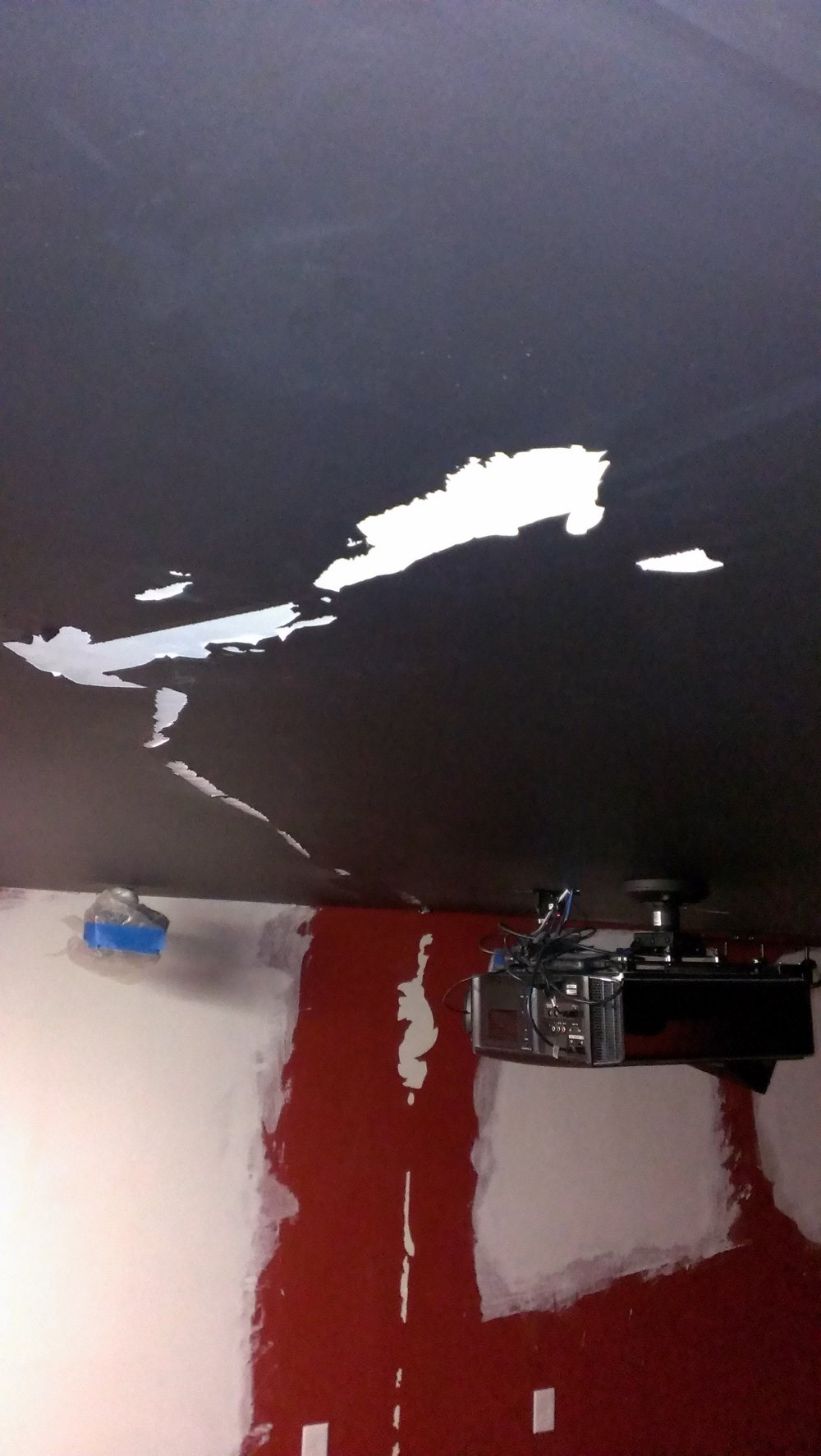 I wasn’t going to let that happen again. So I waited an appropriate amount of time after the repairs and had a second painter, one I knew and trusted, finish off the room for me.

Photos of that will have to wait for another post. More to come.