Anyone who’s ever lived through a home renovation or construction project can undoubtedly tell you that unexpected problems and cost overruns are pretty much par for the course. As a first-time homeowner trying to build a home theater in the basement, I’m learning the reality of this the hard way. The thing that’s currently sucking the dollars out of my pocket like a Hoover: plumbing.

Problems started when I noticed a small puddle of water seeping up through the basement floor. I knew immediately that this was going to be bad. The first plumber I had in more or less just brushed this off, claiming that it was probably ground water and there was nothing I could do about it. When I explained that I planned to put carpet in the room and didn’t want a soggy floor, he pretty much told me that I was s.o.l. I didn’t like this guy at all.

Also, I knew he was wrong, and that he could have figured out that this wasn’t a ground water issue if he’d bothered to look at it for five minutes. We first noticed the puddle on a dry day, and it seemed to directly correlate to running water in the house.

After we’d already torn out the walls in the room for the remodel, my father-in-law (who knows a thing or two about plumbing) identified the source of the leak as a pipe that runs from the kitchen above, down the foundation wall, and under the basement floor. When we turned on the kitchen sink, water ran out onto the floor. When we turned off the sink, the water subsided. That seems pretty conclusive to me.

So, we tore up part of the floor to find the hole. 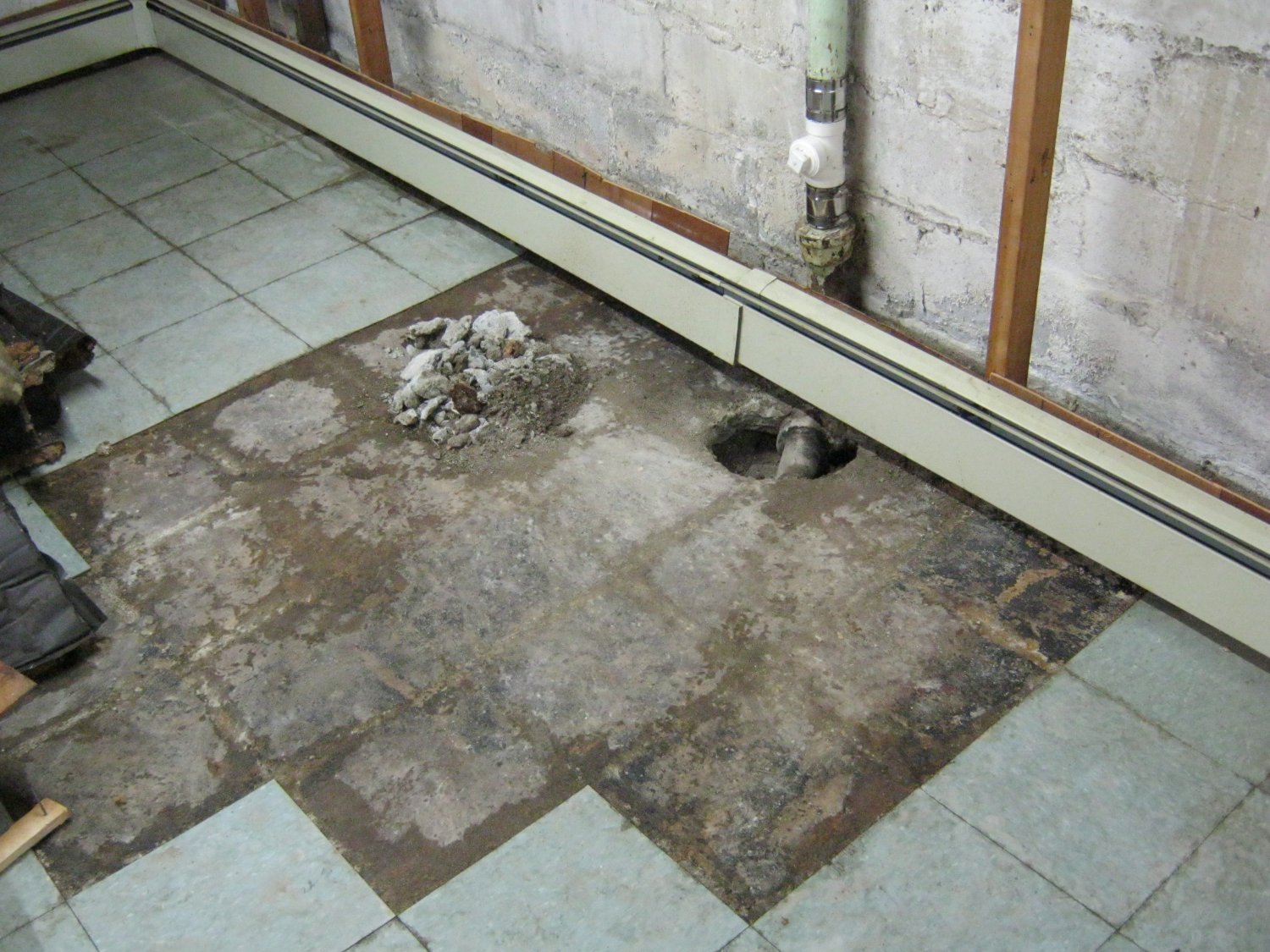 My father-in-law could get us this far, and put a temporary patch on the pipe to tide us over, but we still needed a plumber to fix the problem. Since I didn’t like the first guy, I called another. The second plumber at least recognized the problem, but his proposed solution was to tear out the entire basement floor and replace everything at what seemed to be an exorbitant cost (not to mention the cost of replacing all the floor afterwards). Given that the rest of the pipe that we can see appears to be in good shape, except for the junction where it hits the floor (which my father-in-law explains is most susceptible to rotting out), this plumber’s plan seemed excessive (and a budget-killer).

Thus, we brought in a third plumber. I like this guy better. He seems to know what he’s talking about, he’s familiar with the workings of old houses in this area, and he pointed out a few things regarding sewage and storm drain-outs that the last plumber either missed or was ignorant about. While his price for the repair is certainly not cheap, it’s within my means. I hired him, and he fixed the leak in a day. One problem down.

Sadly, that’s not the last of my plumbing issues. I also need him to remove the baseboard heating so that my contractor can build new walls, which the baseboards will be installed back onto later. That turns out not to be a very big deal. The plumber got that done the same day that he fixed the leak.

More problematic are some heating pipes that had been in a large soffit on one side of the room, and a gas pipe below the joists right in the center of the room. 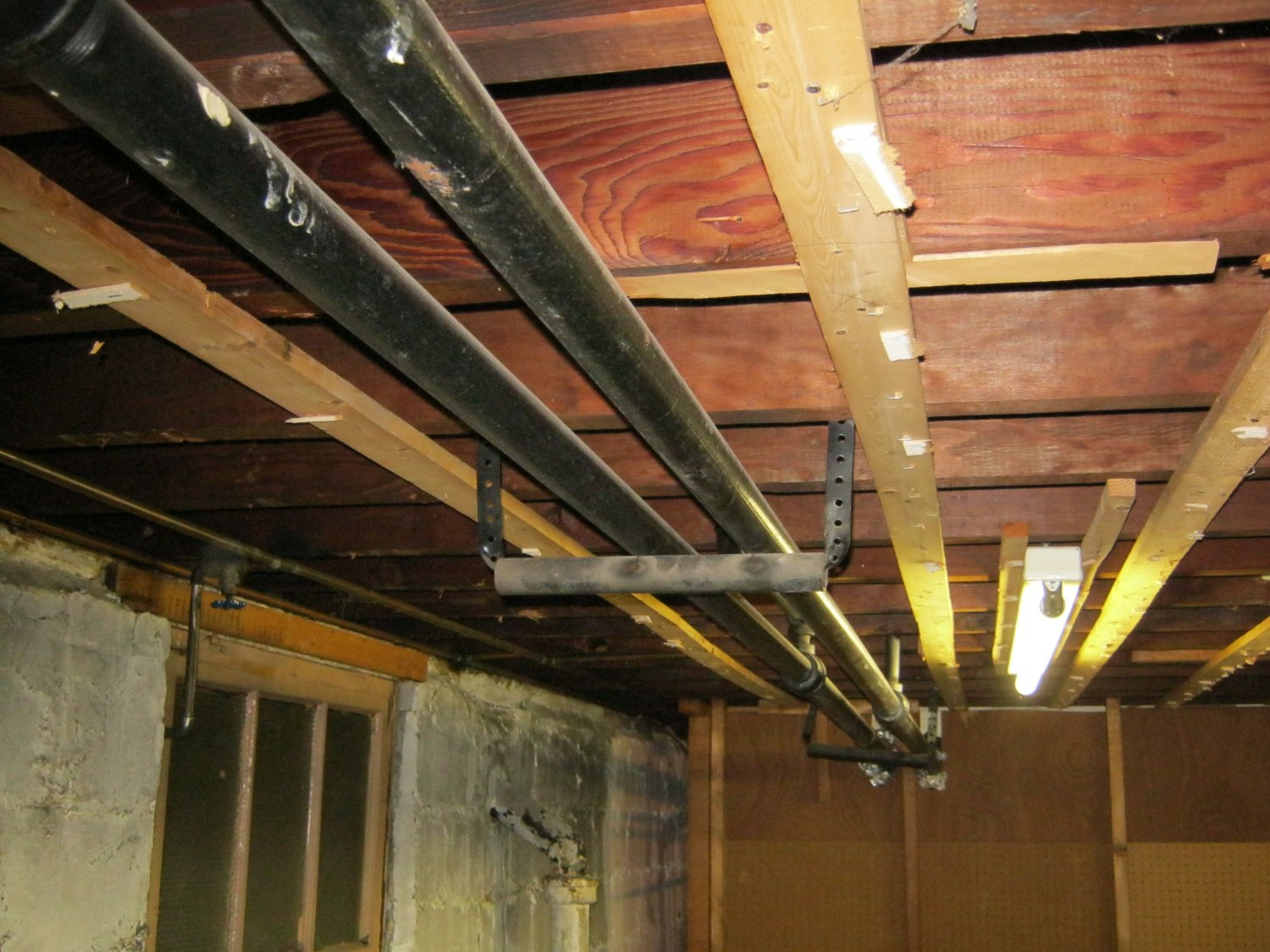 I need my electrician to move an electrical conduit near that gas pipe as well. 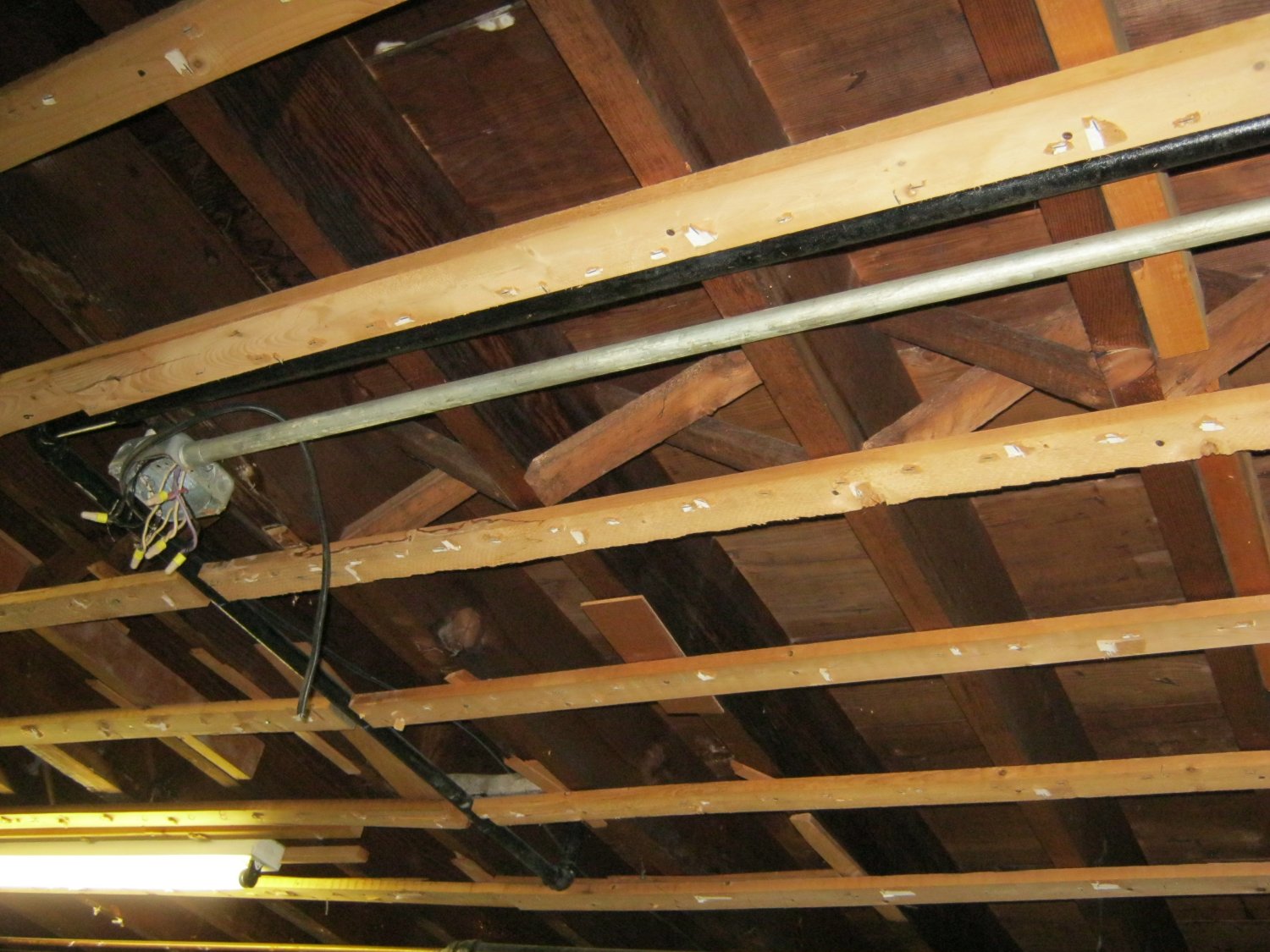 Because the basement already has low headroom, I want to preserve as much height as possible. My contractor advised that it would be best to move all of these pipes out of the way so that he could put the new ceiling as close to the joists as possible. Doing so also means that he doesn’t have to build a new soffit around those low-hanging pipes, which will be a savings on his end (not enough savings to fully counteract the cost of moving the pipes, but I’d really like the area cleared anyway).

There’s also a small section of the ceiling where a water pipe dips below the joists. It doesn’t look like much of a problem, but of course re-piping it will be an expensive hassle. 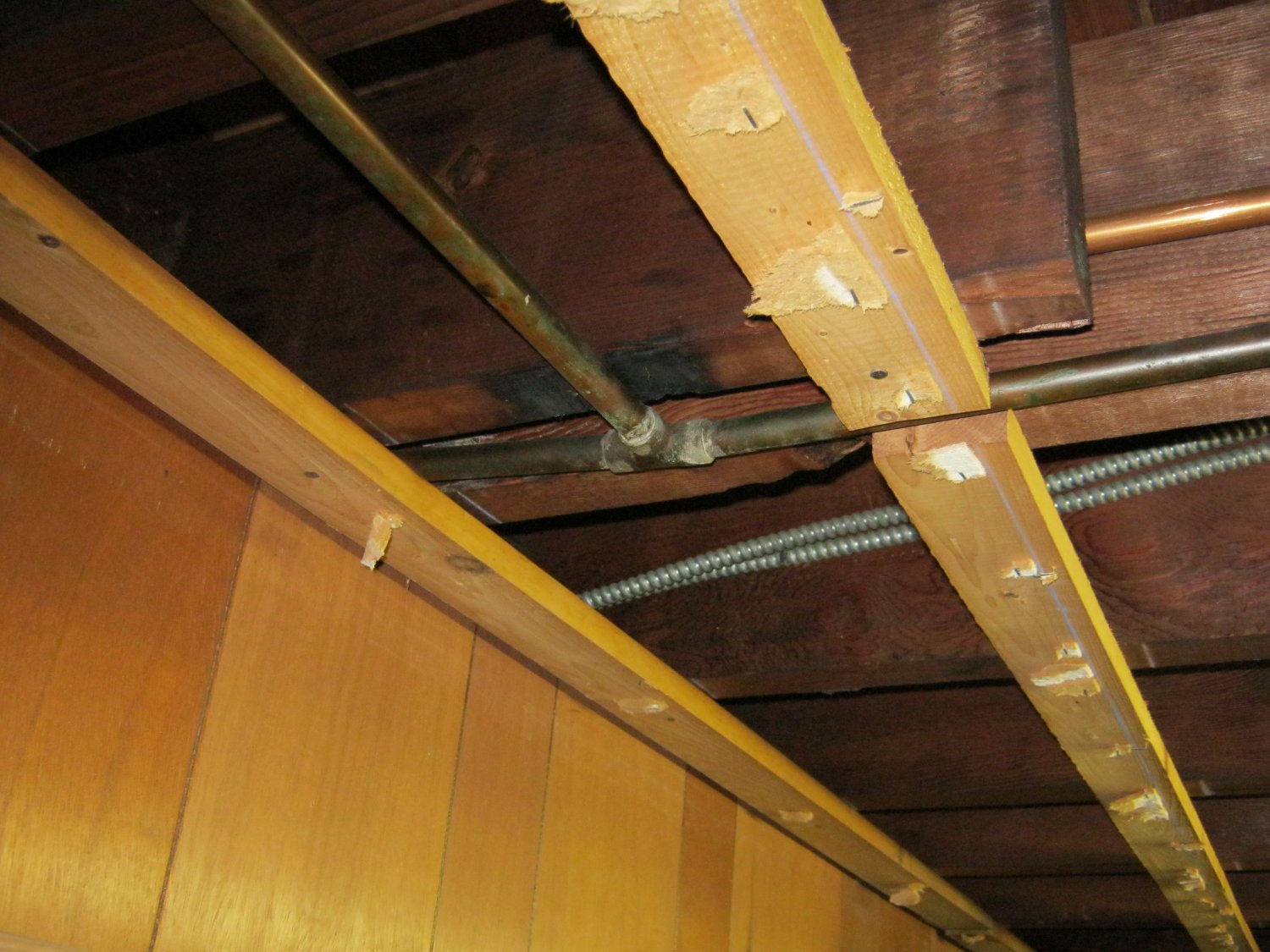 I’ve committed to moving all of those pipes. The question now is where to put them. The room has another soffit near the entry that also has some pipes in it. The most logical course of action is to move all of the other pipes into this soffit. 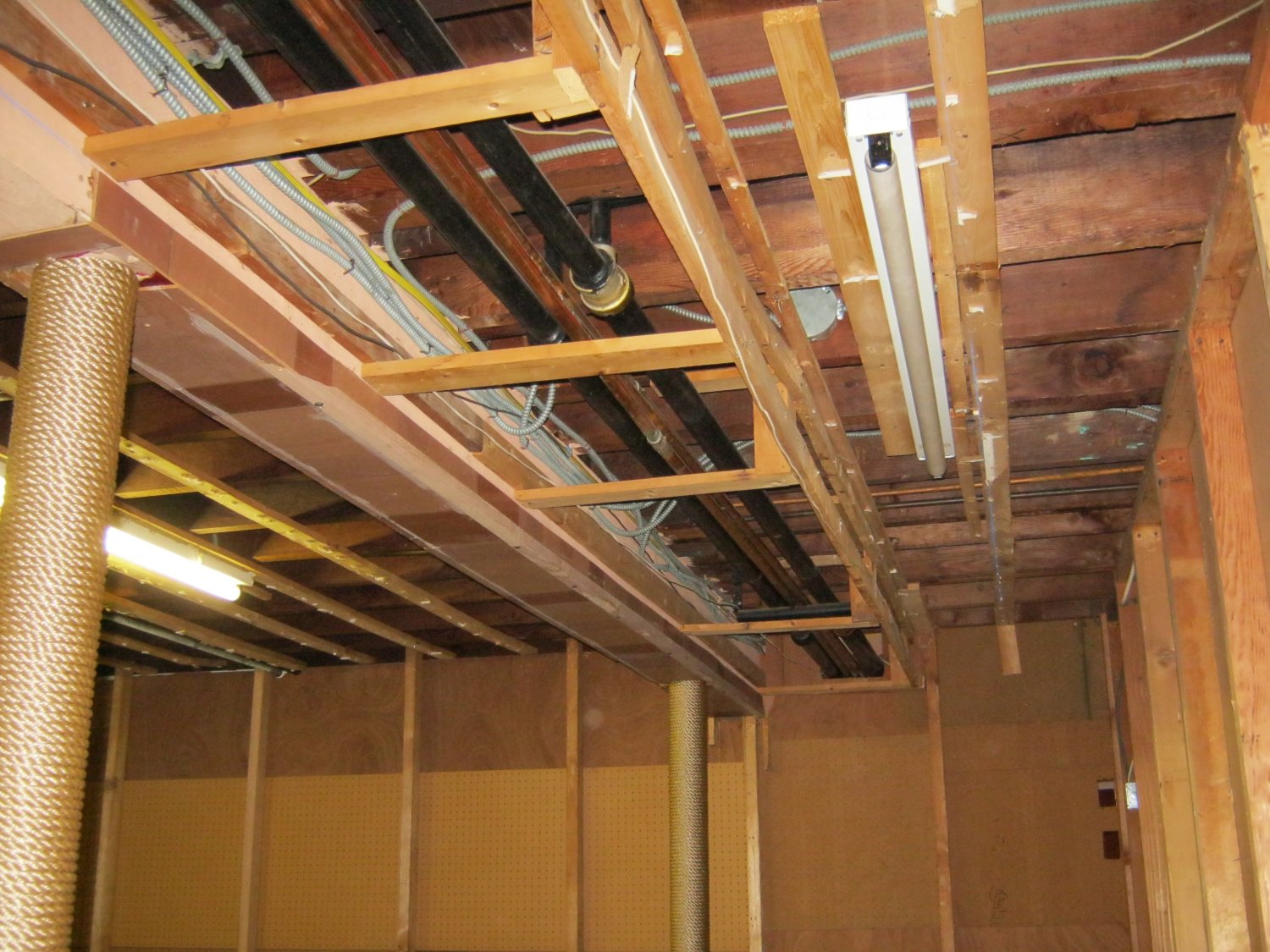 There’s just one little problem with that. The soffit is behind a major support beam. 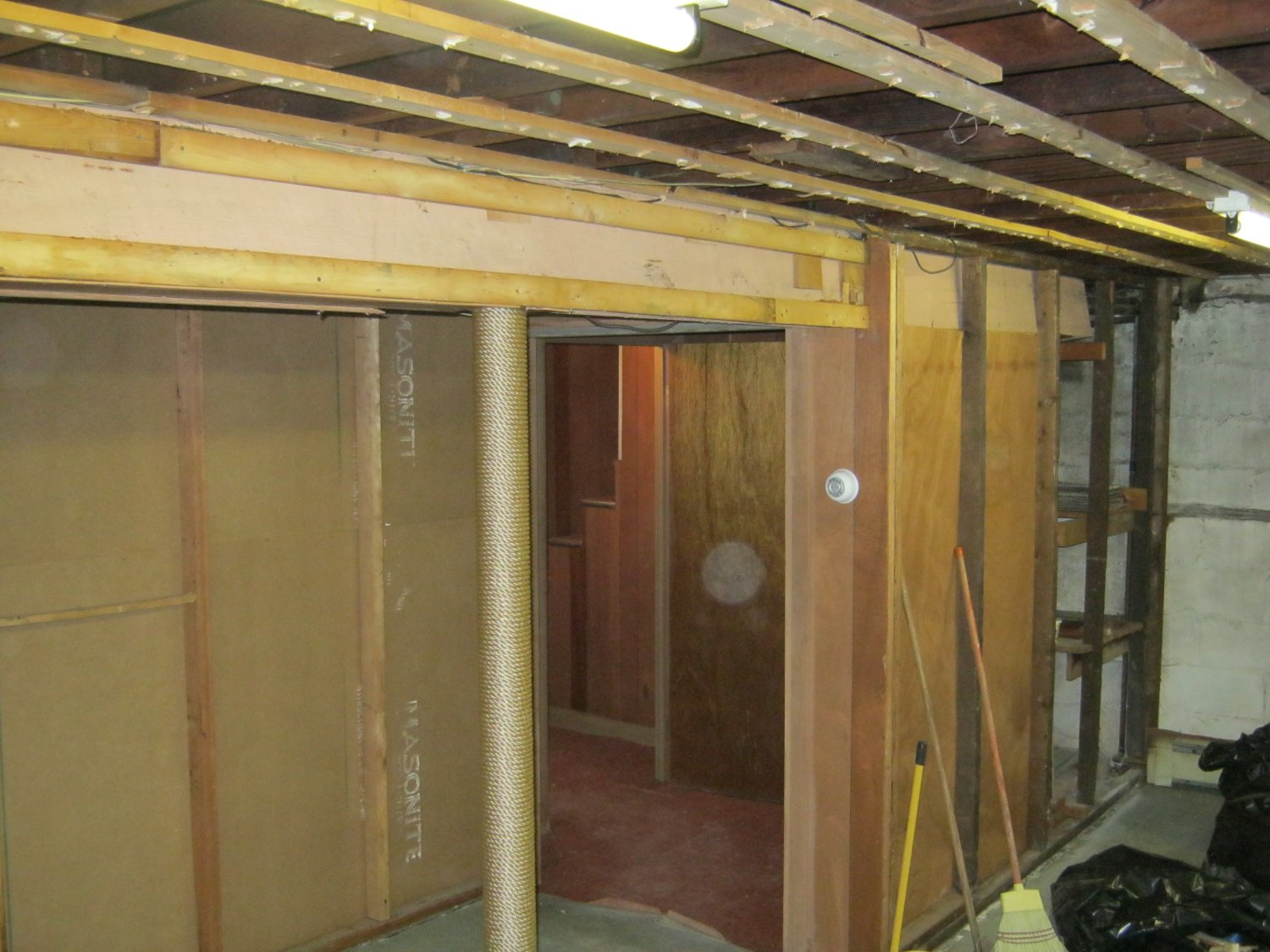 Why would that be an issue? Normally, it wouldn’t. However, like everything else in this basement, the beam was apparently installed by a short person. The bottom of the beam is 6 feet off the ground. I am 6’1″. I already have to duck to get under the beam, which is annoying. My plans for soundproofing the room would require building a larger soffit around the whole beam that would drop the overall height another couple of inches, bringing it to about the level of my nose. I would have to limbo to get into the room. This is not acceptable.

My contractor and I have been in talks about possible solutions to this problem, such as raising a portion of the beam. (He assures me that there’s a way to do this that is structurally sound.) Naturally, that’s going to be expensive in itself, but it can’t be done at all if that soffit with the pipes remains where it is. All of the pipes currently inside the home theater would have to be moved into the laundry room on the other side of the entry wall.

My plumber tells me that this can be done, but, like everything else, it’s going to be expensive. My money is all just pouring down the drain at this point. I have to keep assuring myself that, in another month’s time, this entire project will be complete and I’ll be able to enjoy my new home theater. That thought is the only thing getting me through this process.