I’ve been renovating the basement in my new house into a home theater for a couple months now, and the room has seen a remarkable transformation in that time. Even so, with as much work as I’ve put into this and as far as we’ve come, I’ve lately hit the point where it seems like the thing will never be finished.

I ended the last post in this series by saying, “It’s a huge project, but I’ve been pretty amazed at how quickly it’s moving.” Indeed, the bulk of the construction seemed to fly by in a blink. However, once that part was done, I’ve gotten mired in the complications of putting some finishing touches on and getting the room into usable shape. Perhaps my perception of how much things have slowed down is distorted by my expectations. I assumed that actually building the room (putting up walls and a ceiling, re-piping the plumbing, moving a portion of the support beam and carving a new entryway to the room) would take a long time, while slapping on a coat of paint and making it look pretty would be the easy part. As it turns out, my contractor works extremely quickly and efficiently, but now I’m tasked with making difficult decisions about the functionality of the room.

In any case, when I show you these pictures, you’ll probably have a different view of the situation than I do, since I’m stuck in the middle of it. The room is certainly starting to come together. It just isn’t there yet.

First, here’s a wide view of the front of the room. As you can see, I’ve painted and put carpeting in. I decided to go with a rich red and black theme. 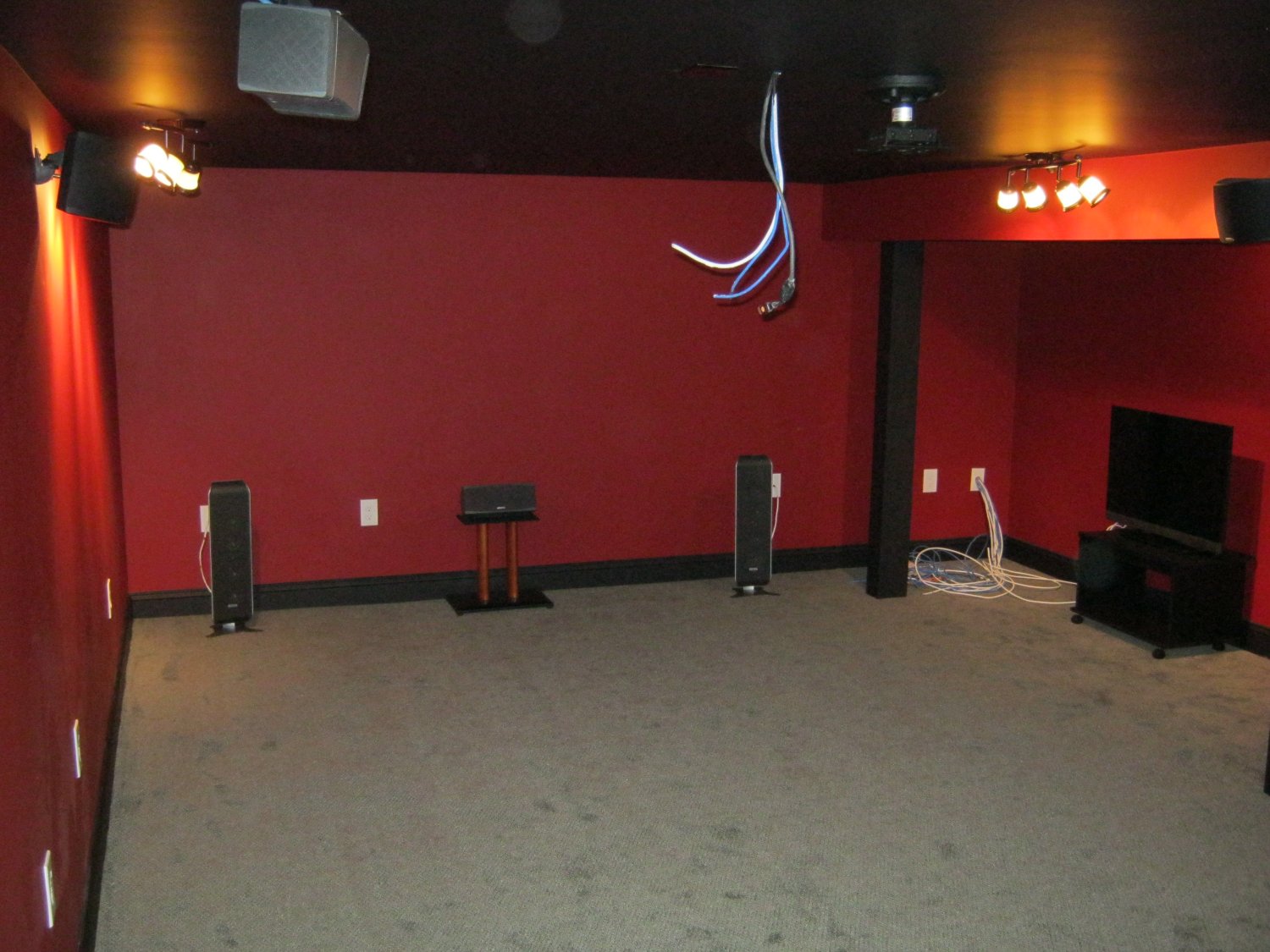 Those white electrical plates on the walls stand out a bit, don’t they? I’ve debated replacing them with black plates and outlets to go with the ceiling and trim, but I sort of like that they provide a little contrast against the other dark colors. I haven’t made up my mind yet. Mrs. Z says that I’m overthinking this and should just leave them.

The carpet didn’t photograph well in these shots. It’s actually a dark gray. I’m not much of a photographer, sadly.

The back of the room will be an office space. I found the desk rather inexpensively at The Container Store. The chair is a hand-me-down from a friend who was moving. 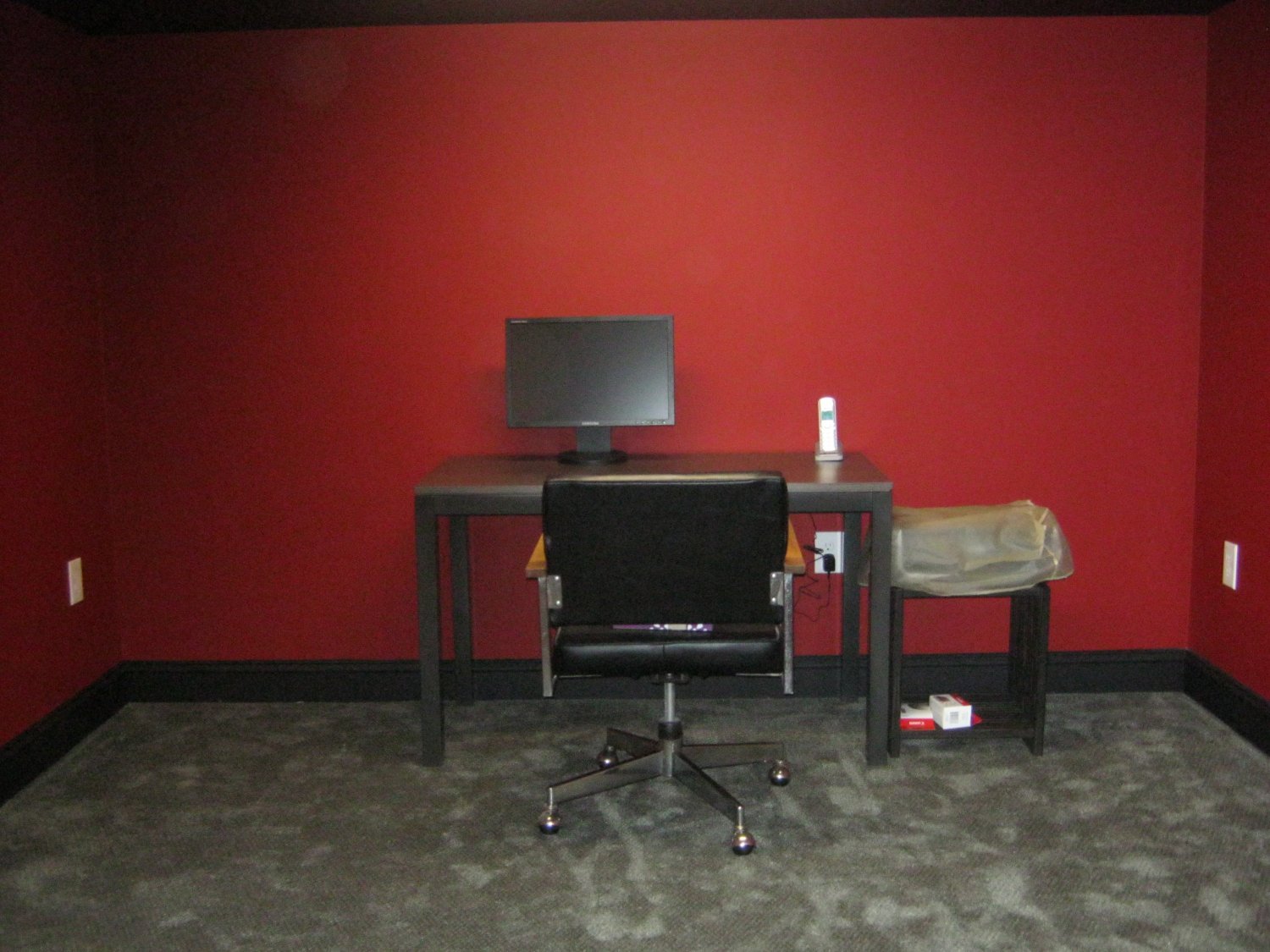 Light in the office area will come from an overhead fluorescent that can be turned off independently. In the home theater, I had my electrician install two small rows of track lights that I found at Home Depot on both sides of the room. 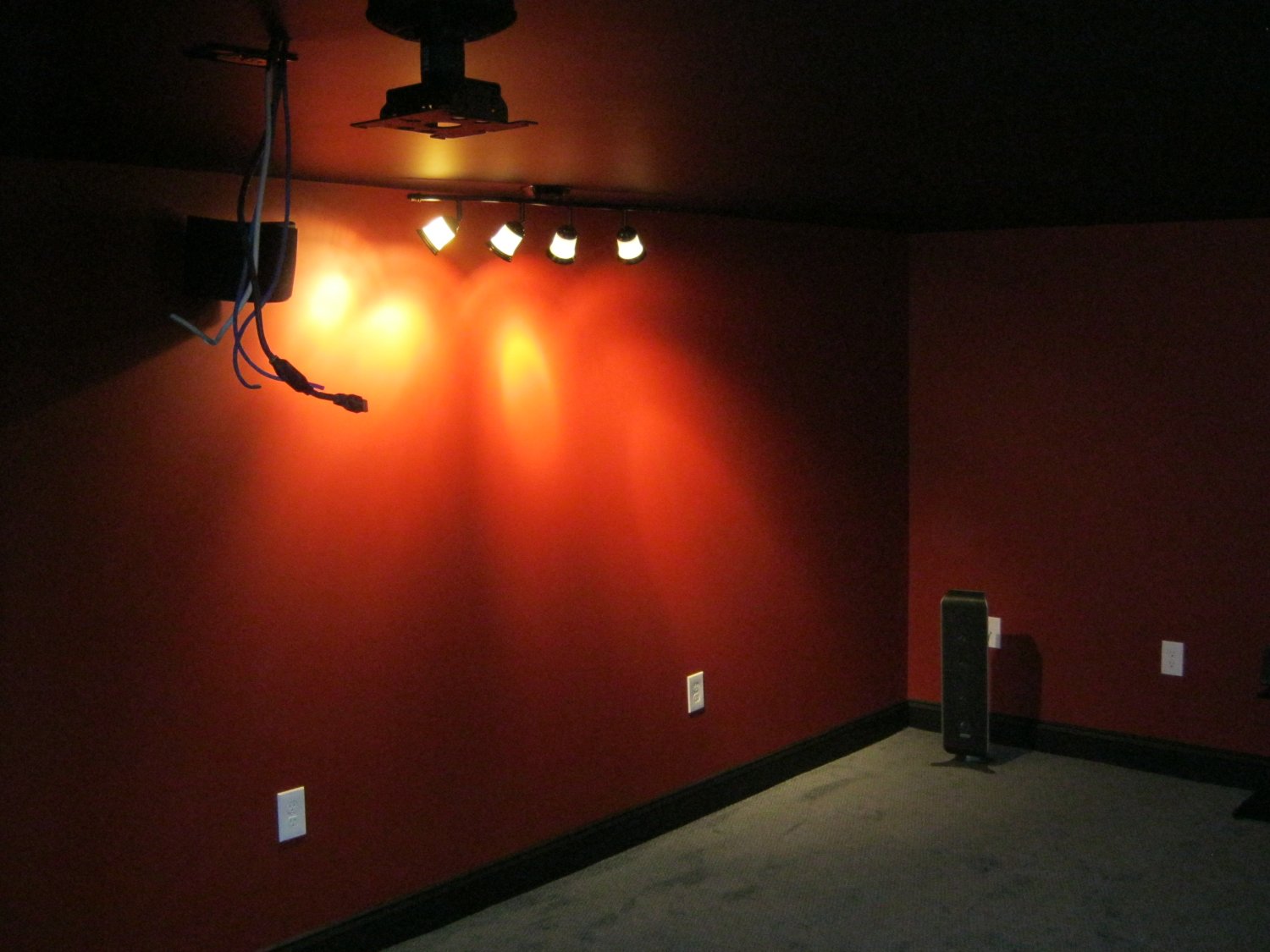 These are actually pretty bright if I turn them to face into the center of the room, but I’ve chosen to aim them against the walls instead to create a little moodiness. I don’t need the theater to be awash in light.

In the alcove on the side of the room, I have a small LED strip hidden behind the support beam soffit. I figure that I’ll either put my movie collection or some posters and artwork on that wall. 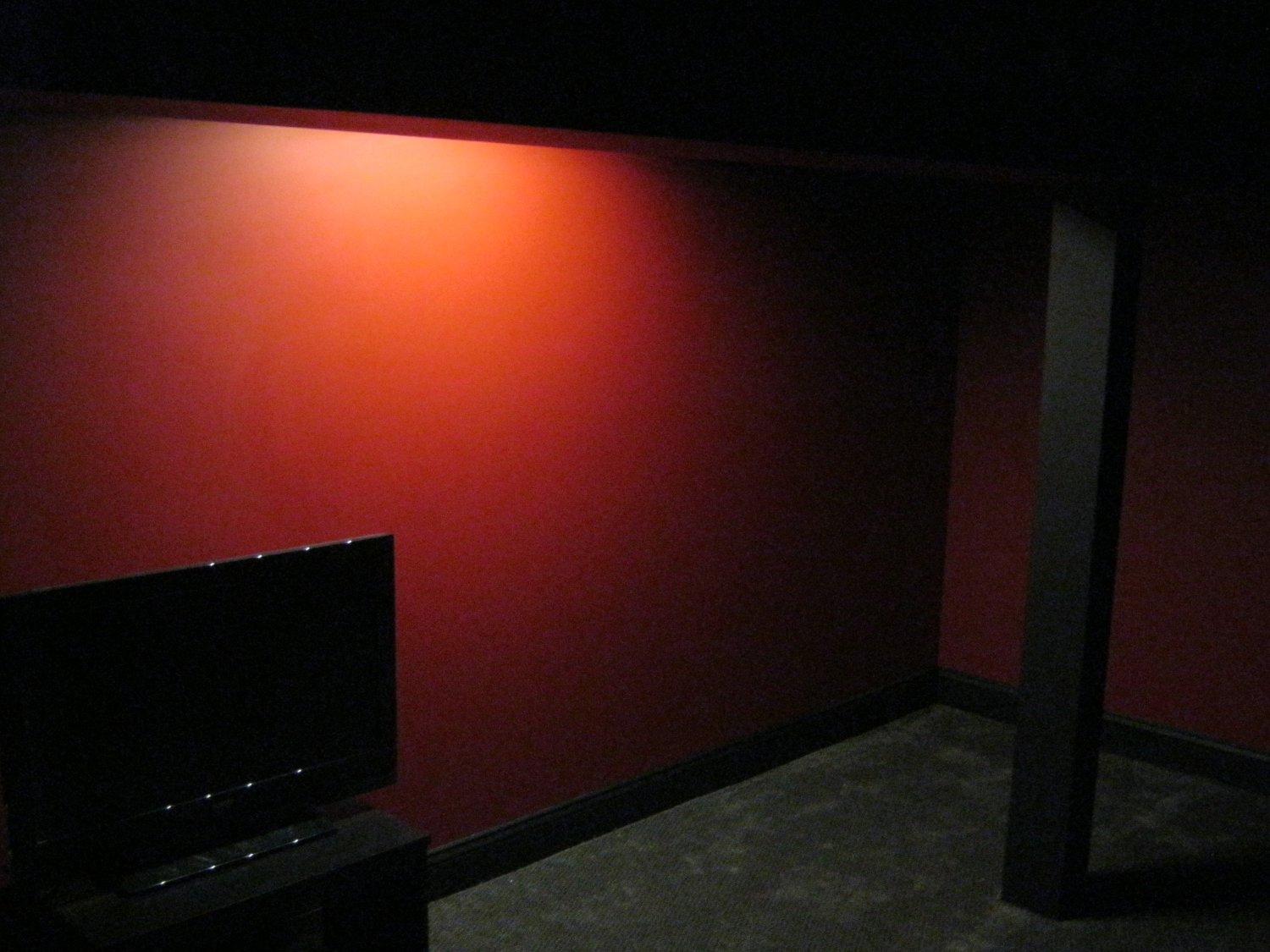 I currently have a TV sitting on a rolling cart in the alcove. 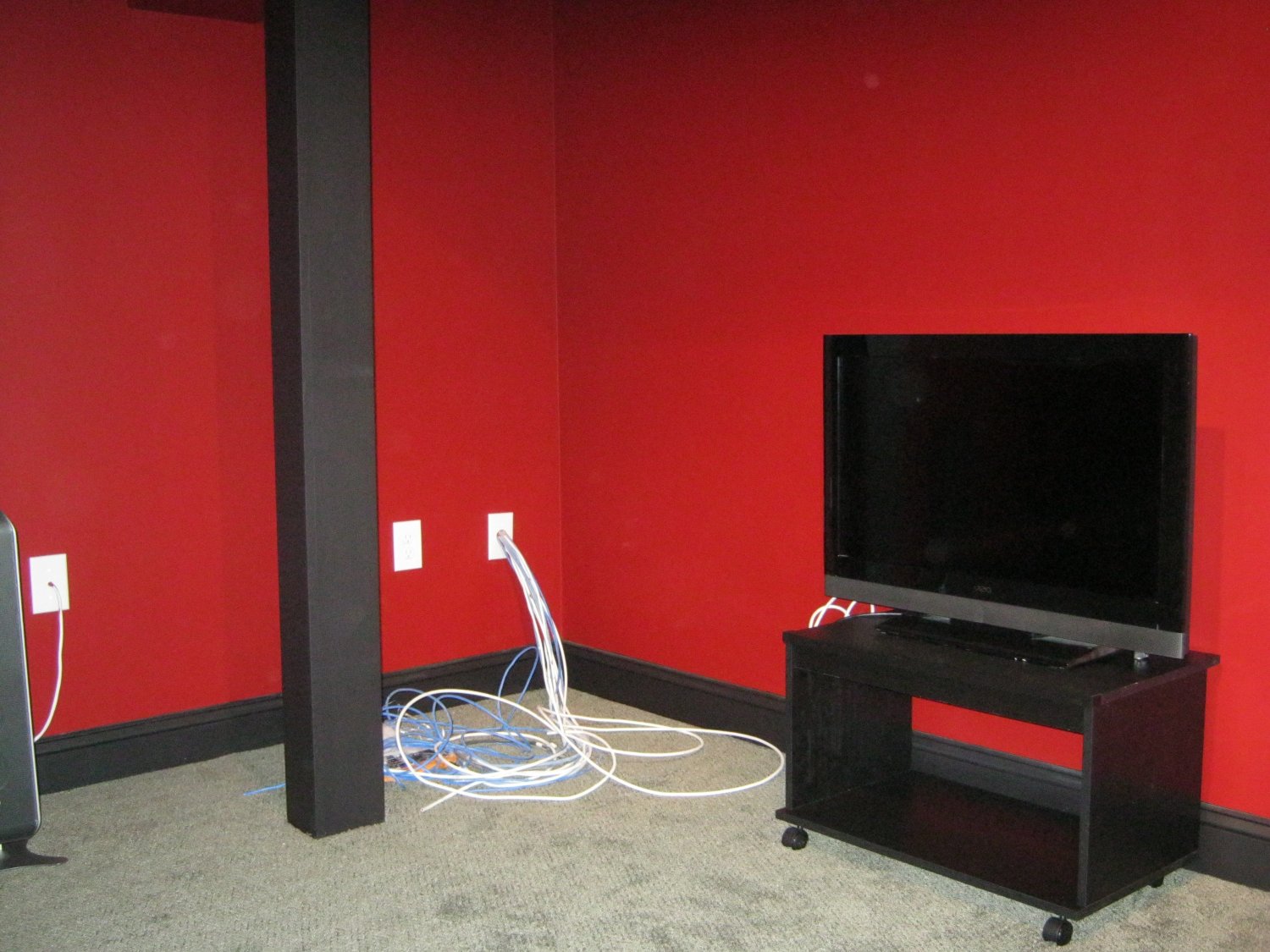 Having a secondary TV in the home theater is very important to me. I’m not always going to want to turn on my projector. I especially don’t want to waste precious lamp hours just to play a videogame or watch the bonus features on some Blu-ray. In my old apartment, I kept the TV to the side of the room, which was never ideal. It was an awkward viewing angle and all of my speakers were aiming from completely the wrong direction. Now, if I want to use that TV, I can just wheel it out to the center of the room on a long HDMI cable. This will be much more convenient. The cart cost me a whopping $18 at Target.

At the start of construction, I had my home theater installers (Sounds Good Corp. of Waltham, MA) pre-wire the walls for my speaker wire, HDMI and networking cables. After the painting was done, I had them come back out to hang my projector mount and surround speakers. 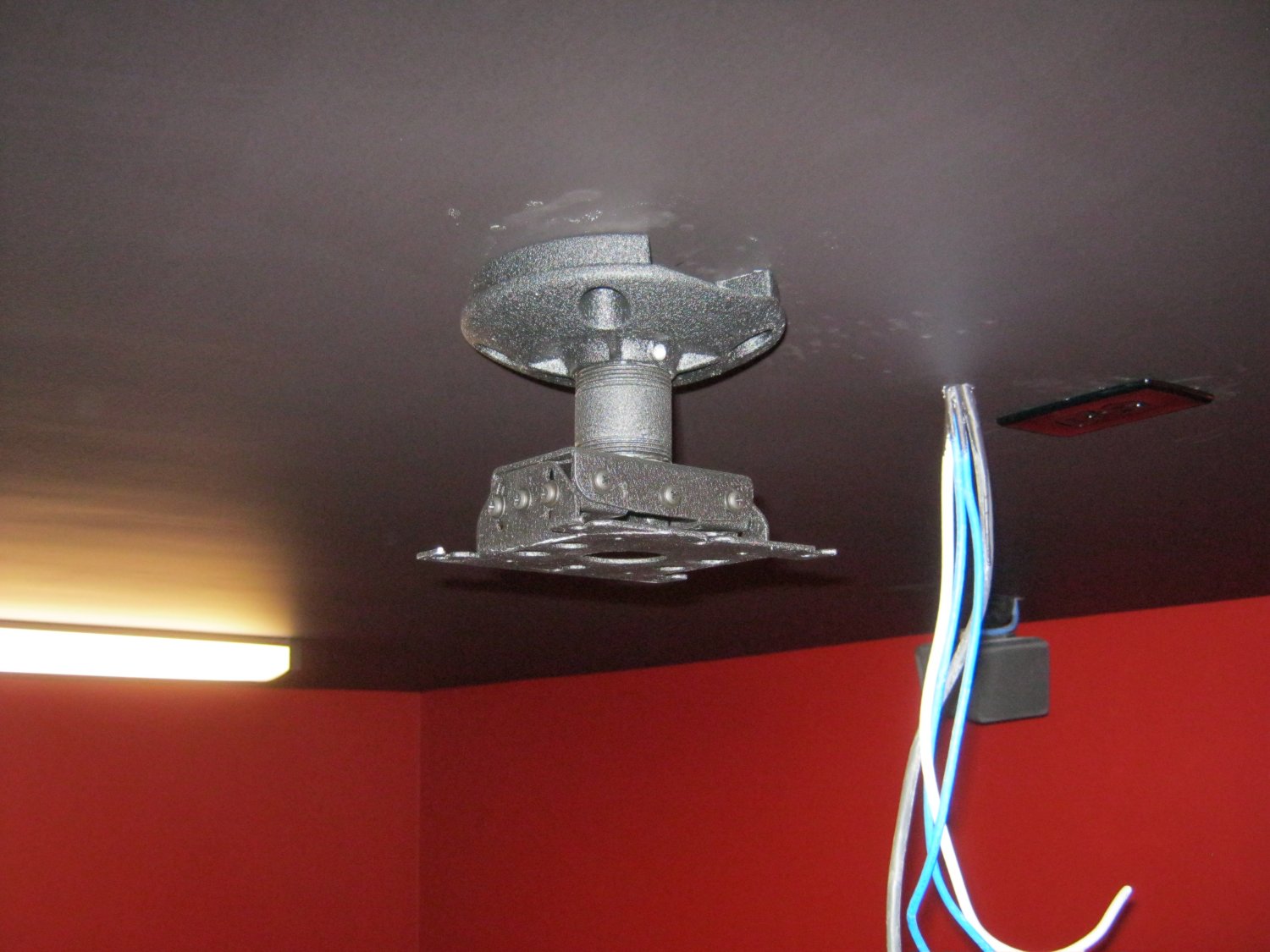 Because I’m running a 7.1 configuration, I have both regular surround speakers to the sides of the seating position and back surrounds behind. 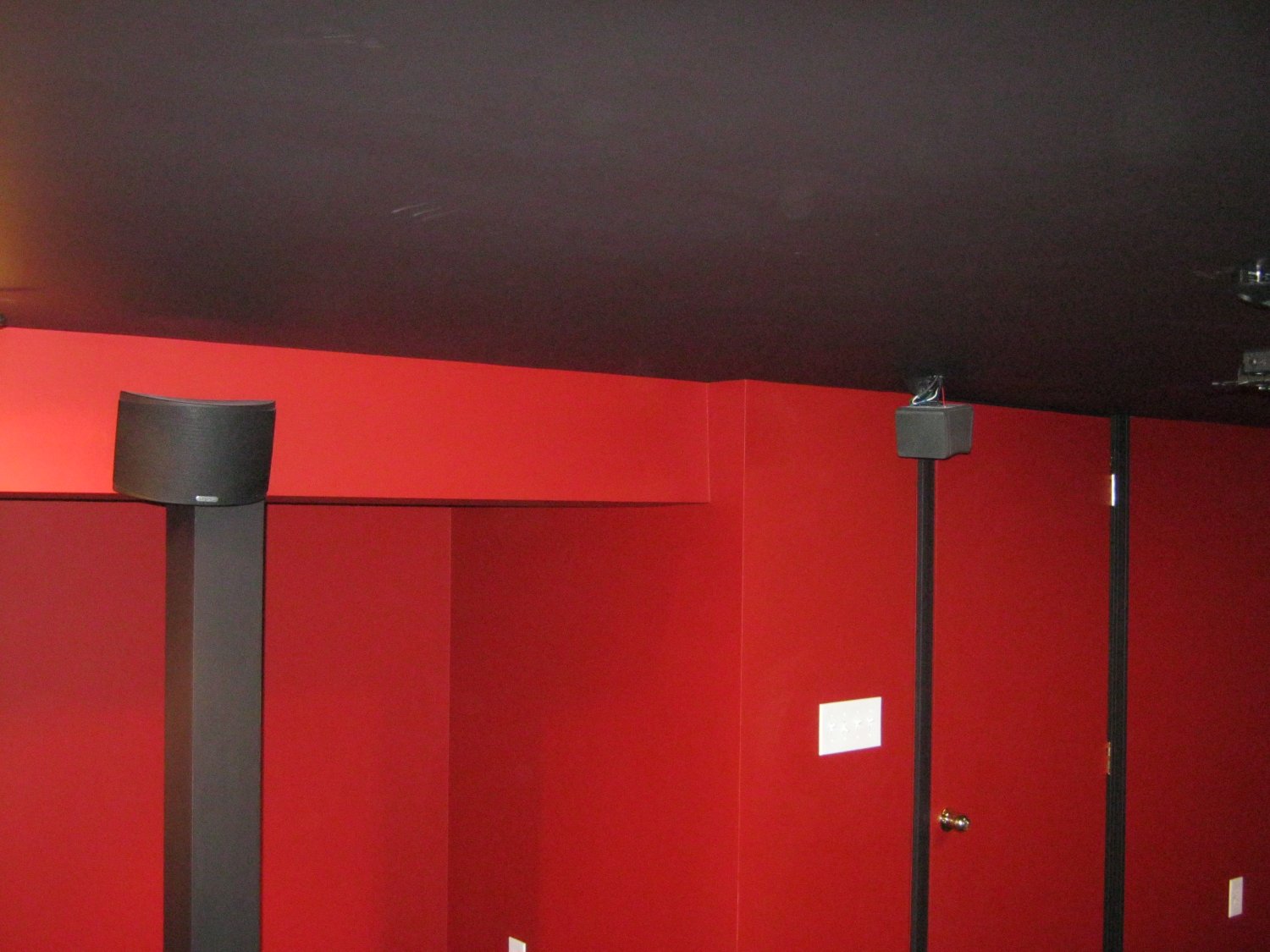 One complication I didn’t foresee was that the speakers I’d been using for the back surrounds in my old location were designed to be mounted on the walls, not the ceiling. They’re also meant to fire off to the sides for dispersion, not be aimed directly at the seat. Fortunately, they can be switched to a direct radiating mode and only fire in one direction. The installer had some reservations about jury-rigging the mount to the ceiling (he prefers something flush or recessed), but I personally don’t mind the way they look like this. 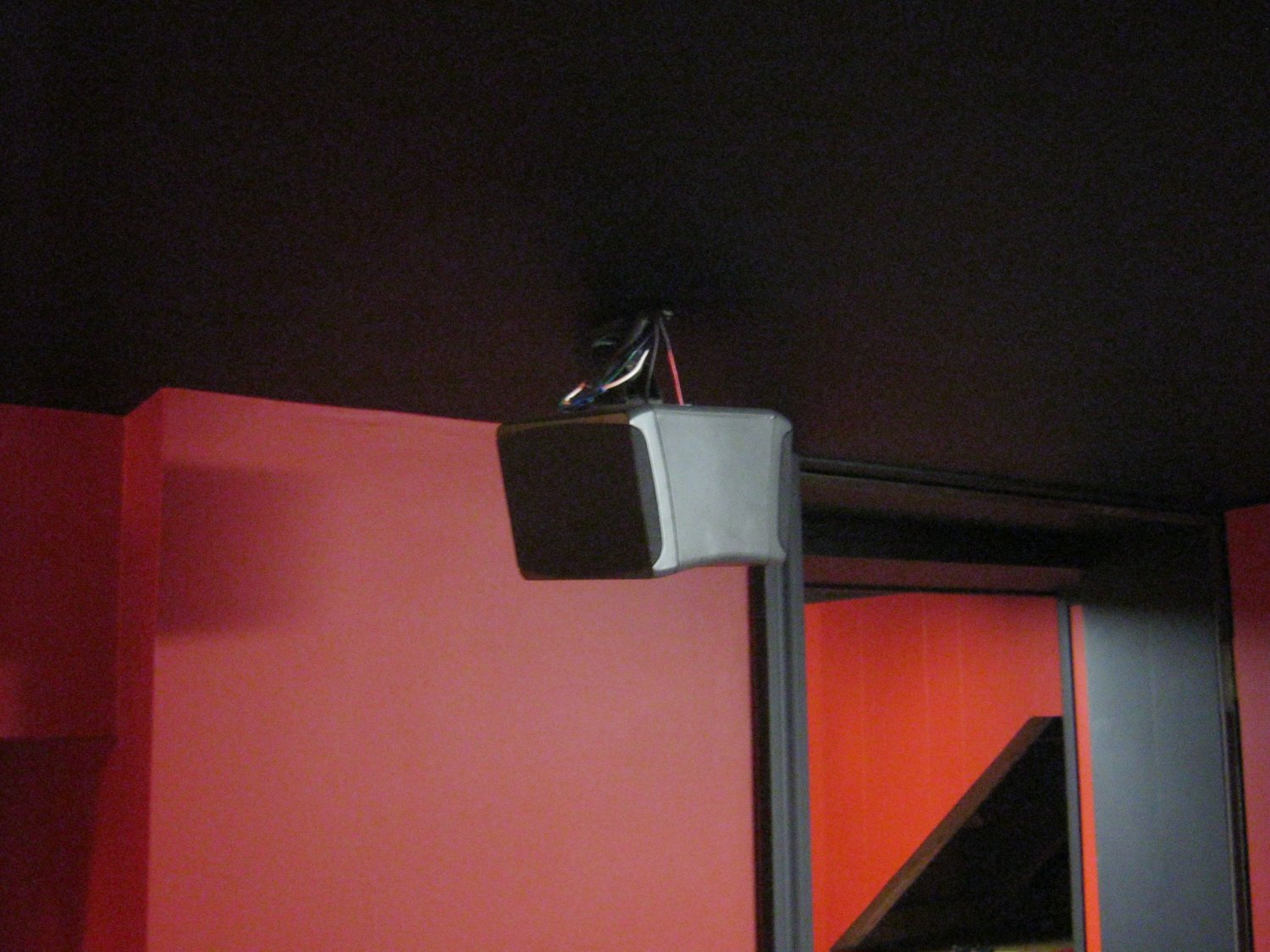 Unfortunately, due to scheduling issues, I had the installer come out before the room had been carpeted. He (rightly) advised against mounting the projection screen at that time, because he didn’t want to get it dirty or damaged on the old tile floor that had recently been the site of a lot of messy construction. We also weren’t able to put the projector on the mount, because it appeared that we were missing some important screws. (Of course, it turns out that we had them the whole time, as I discovered after he left.) So now I’m waiting for him to come back and finish the work.

As close as this home theater may look to being finished, it really isn’t. For one thing, I still need to bring all of my other electronic gear into the room. That’s complicated by the fact that I either need to paint my old equipment shelves to match the current décor or buy new ones. (I’m leaning toward the latter, but haven’t found anything I completely like in my price range.) I’m suffering from many conflicting ideas about where to put my movie collection and how to decorate the space. I haven’t settled on new seating yet, and so will have to make do with my old recliner (which doesn’t really go with the room) temporarily.

Most critically, the room sounds awful right now. Even with carpet, I have reflections and echoes all over the place. I’ve been working with a specialist to advise on acoustical treatments, but it will be a little while before I have all that worked out and installed. Then will come a breaking-in period where I have to experiment with the treatments and my speakers to find optimal placement and to calibrate.

I also expect that my old speakers (especially my old subwoofer) will be insufficient to fill the much larger space. This week, I found a great deal on a subwoofer that I’ve had my eyes on for a while, so I’ve already placed an order for that. I hope that I don’t have to replace my front mains, however, because I’m running out of money quickly.

I know that this room is going to be great when it’s done, but it feels like that day just keeps getting pushed back further and further. All I want to do is sit back and watch a movie in my new home theater. I wish I knew exactly when that will be.

In the meantime, perhaps it will help to remind myself just how far I’ve come. Here are a couple of photos of my old apartment home theater in the last stages of its dismantling: 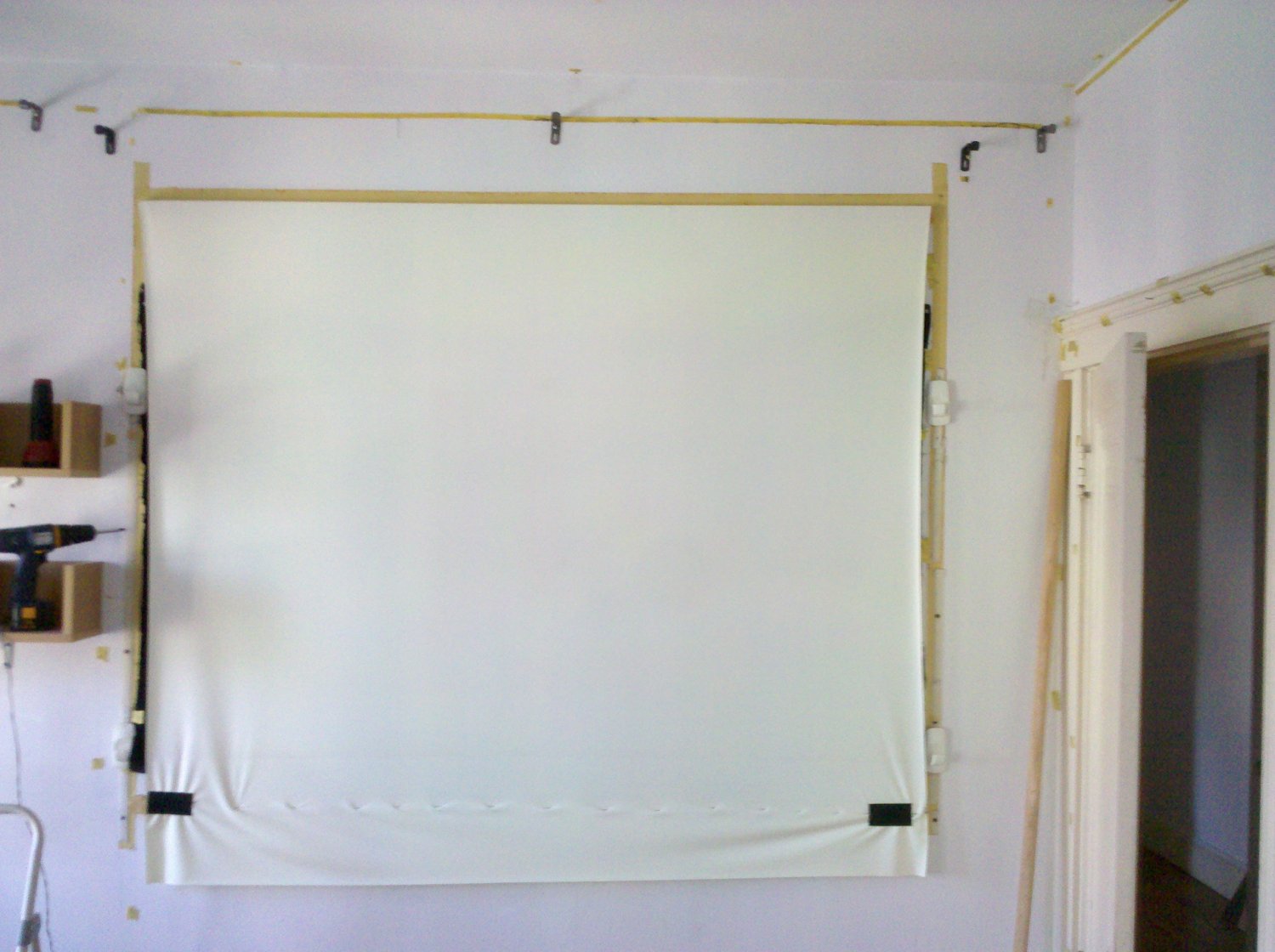 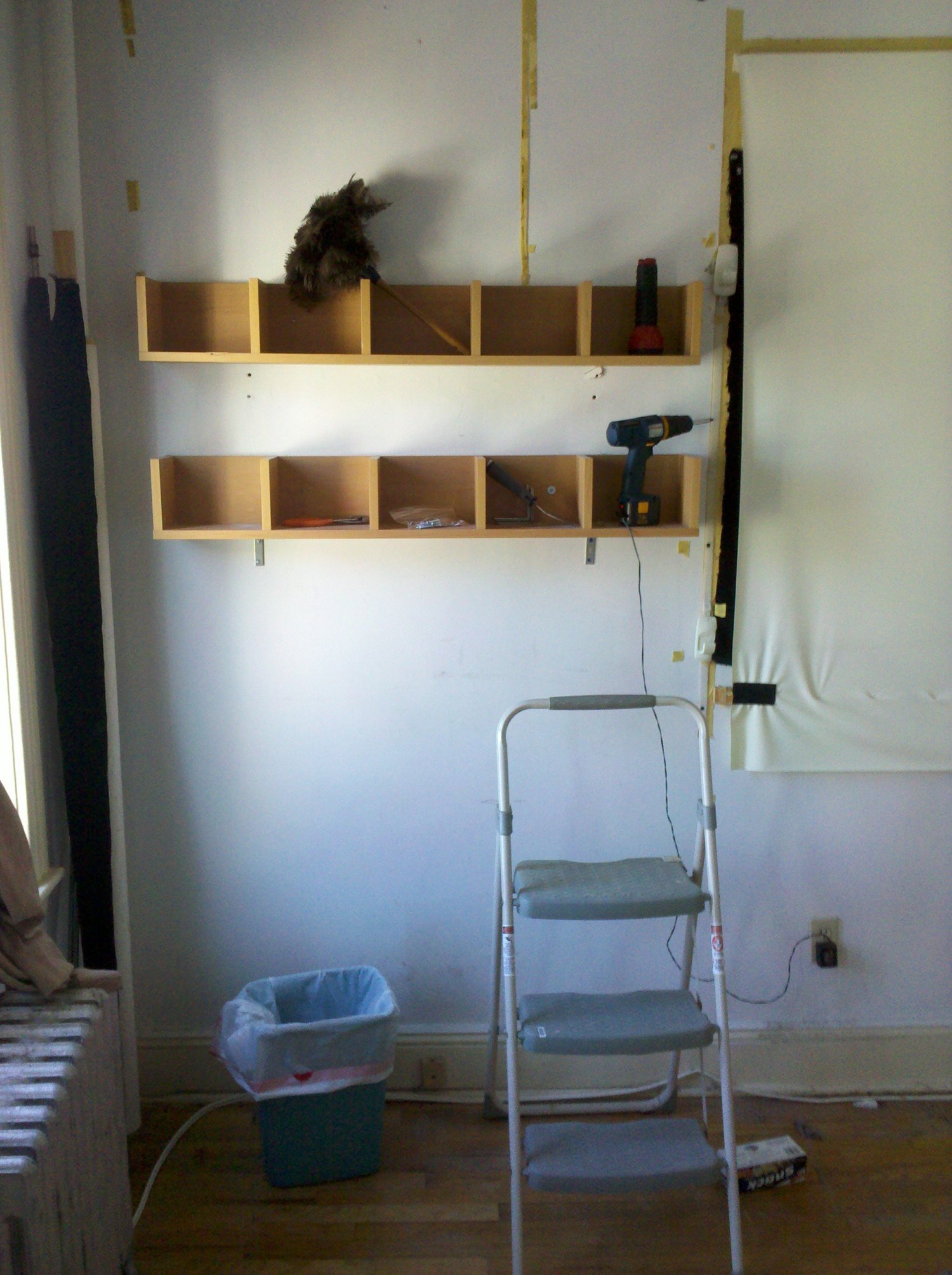 Man, that looks embarrassing, doesn’t it? I’ll be the first to admit that the apartment theater was always kind of ghetto, but I was at least able to hide most of its DIY shortcomings behind a lot of decorations and clutter. Exposed raw like this, the sight is pretty frightening.

Here’s what those shelves used to look like before I boxed all the movies up: 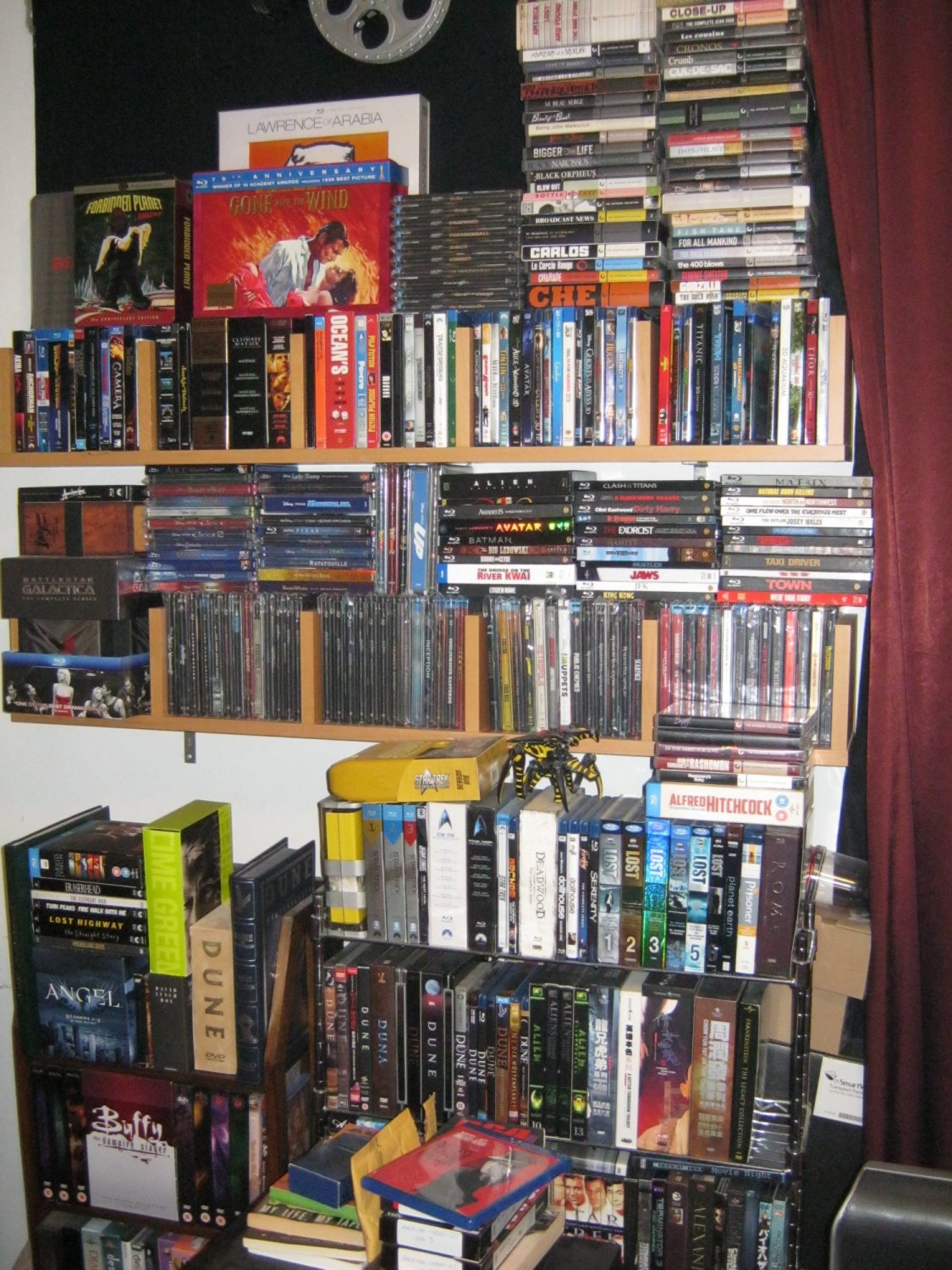 You can see why I have problems deciding where I want all those discs to go in the new space.

Before you ask, yes, there’s a reason that the screen appears to be close to 4:3 in shape. When I originally installed it back in the day, the projector I had at the time was an XGA resolution model. I intentionally put in a larger screen area than I needed, to allow for flexibility in upgrading projectors over time. I used curtains and masking material to cover up the portions of the screen fabric I didn’t need. For the last several years, it was masked off to a widescreen shape and I couldn’t see the top or bottom of the screen at all.

As frustrating as building the new home theater has been, I can console myself with the certainty that the finished room will be a thousand times better than what I had before. I just have to get there.