Lately, I feel like my home theater is moving backwards. Despite upgrading to a high-end 4k projector, I’ve also felt compelled to pull some very old equipment back into usage. First was a Laserdisc player, and now a bunch of my old video game consoles.

I’ve mentioned in this blog plenty of times before that I’m not much of a gamer. The original 8-bit Nintendo Entertainment System is still my sweet spot for video games. I have neither an Xbox One nor a PlayStation 4, and the recent announcement of a PS5 didn’t excite me enough to sign up for a waiting list. The most advanced system in my possession is a first-generation “fat” PS3, for which I own about six games, and hadn’t played any of them in years. In fact, aside from the miniature NES Classic Edition deck that I purchased on impulse last year, none of my consoles had even been hooked up to anything in quite a long time.

Firing up the Laserdisc player again got me nostalgic. My kids are just hitting the age where they’re getting curious about video games, but don’t yet have the coordination to play any difficult ones. Some of the old, simple games that have been collecting dust on my shelf seemed like they might be the boys’ speed, so I decided to make a gaming station for them. Unfortunately, my wife was adamant that she’d allow no video games in the living room, nor do we let the kids have a TV in their bedroom. That left only my den in the basement. Recognizing that I was probably opening a Pandora’s Box, I foolishly set about re-integrating the old gaming systems into my otherwise very modern home theater.

Specifically, these are the items I wanted to install:

It was very important to me that I throw this whole project together without spending much money. Fortunately, I already have several bins filled with just about any type of A/V cable I’ll ever need. However, the first major obstacle I encountered was figuring out where to put everything. My equipment shelves are already filled with all of my more important audio and video gear and have no space to squeeze in some bulky game consoles. Even if I could make room for them, the racks are way off to the side of the room, and the only of these consoles with a wireless controller is the PS3. The old corded controllers for the NES and the Xbox won’t reach my seats. That’s kind of a big problem. (Again, I didn’t want to pay for wireless controllers or adapters.)

The answer I came up with was to make a gaming cart that I could store on the other side of the room and wheel out to the front when needed. That led to the only purchase I would make for this endeavor, a rolling printer stand that reasonably matched my room décor. This has enough space on its two shelves for the Xbox, PS3, and NES Classic. I store the vintage NES and all the various controllers in the drawer underneath until needed. 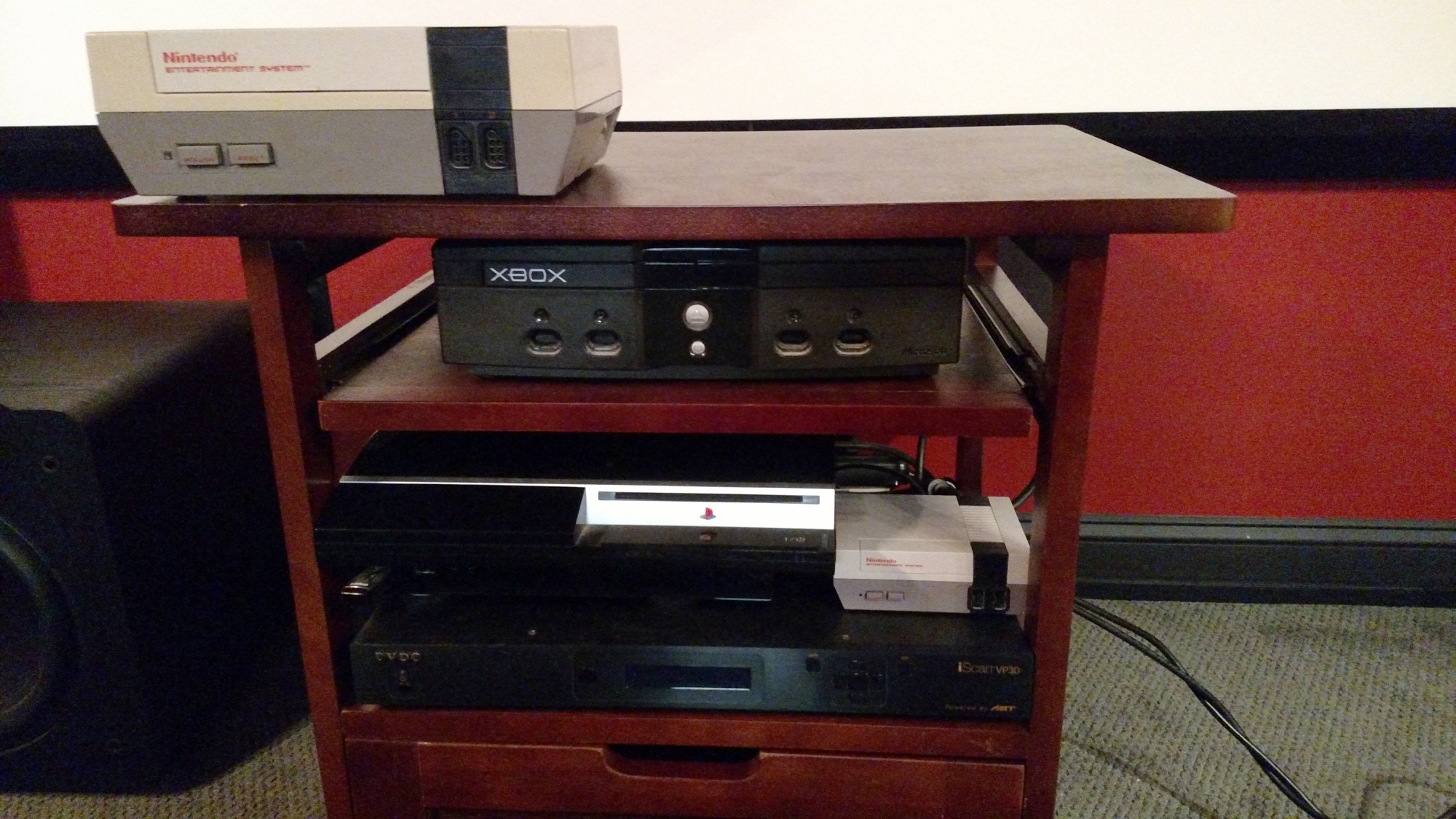 If that sounds like a simple, elegant solution, you may not have considered the myriad of cables required to connect everything. The PS3 and NES Classic at least combine their audio and video into one HDMI cable each, but the vintage NES needs separate cables for Composite video and analog audio, and the Xbox uses Component video (three cables just for that!) plus Toslink audio. Added to that, of course, are power cords for each device. That’s far too many wires to run across my room and plug in each time.

Luckily, being a packrat sometimes has its advantages. Among the old, unused gear taking up storage space in my attic was a DVDO iScan VP50 video processor from around 2006. At one time, several projectors ago, the VP50 was the central hub of my home theater system. I later upgraded to a Lumagen Radiance model (and even that was sidelined to Laserdisc duty recently), but never got around to selling the DVDO. That turned out to be just what I needed to digitize the analog sources and consolidate almost everything into a single HDMI output. I say “almost” because I have a few PS3 games that are fun to play in 3D, but the VP50 can’t process or pass 3D, so I can’t use the processor with that console.

I tried my best to neatly hide all the wires, but still wound up with a tangled mess in the back of the cart. Thankfully, that’s mostly hidden when looking at it from the front. After installing a power strip behind the hardware, I ultimately have one power cord and two HDMI cables coming out of the cart, which isn’t perfect but is much better than trying to connect each device individually. 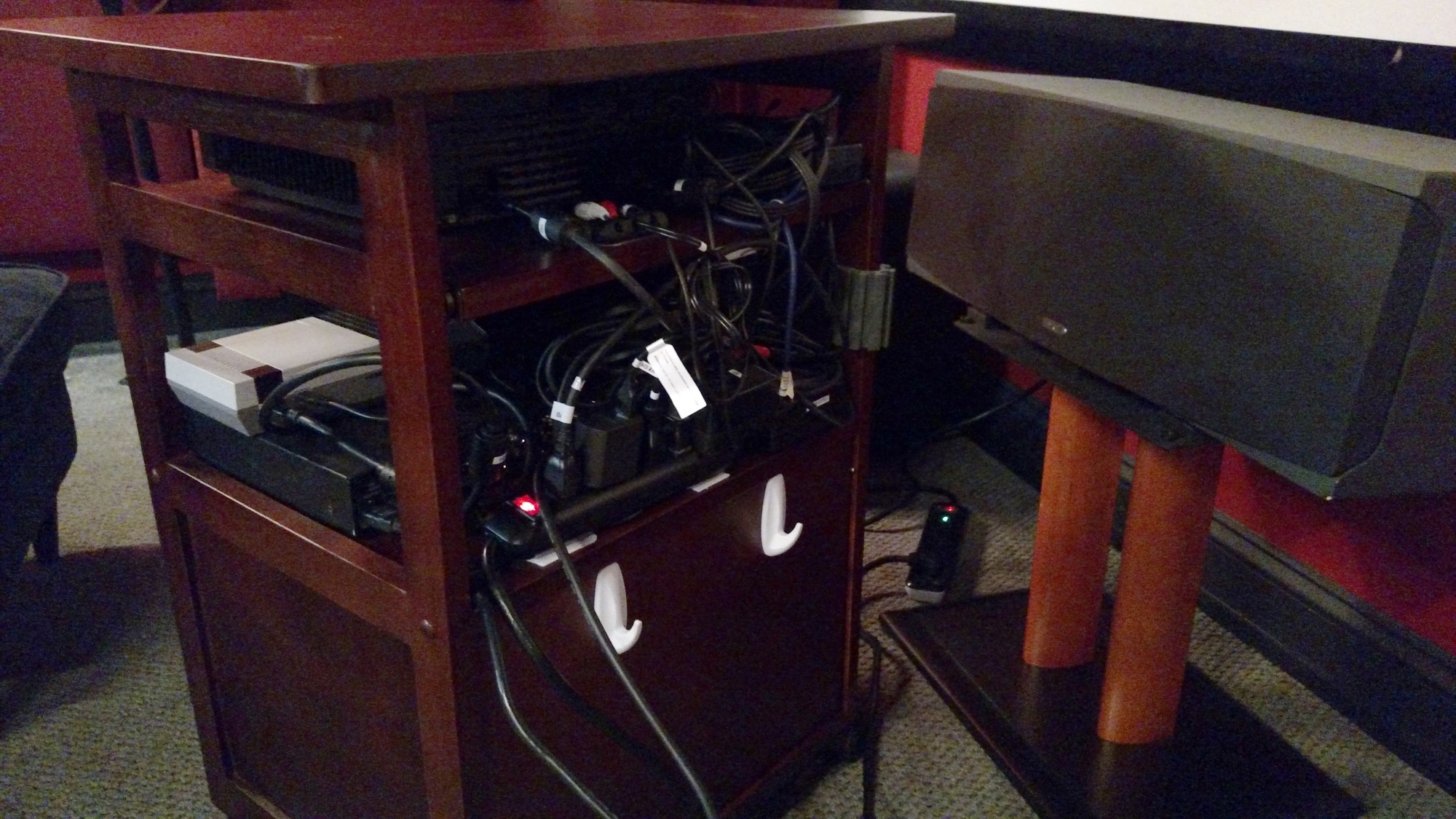 I didn’t happen to have an HDMI cable quite long enough to reach all the way from the cart to my equipment rack (and didn’t want to purchase one), but I did find an HDMI switch among my unused gear. That proved perfect for switching between the PS3 and the other consoles connected to the VP50. From the switch box, I just need to plug one HDMI cable into the Auxillary input on my primary A/V receiver. 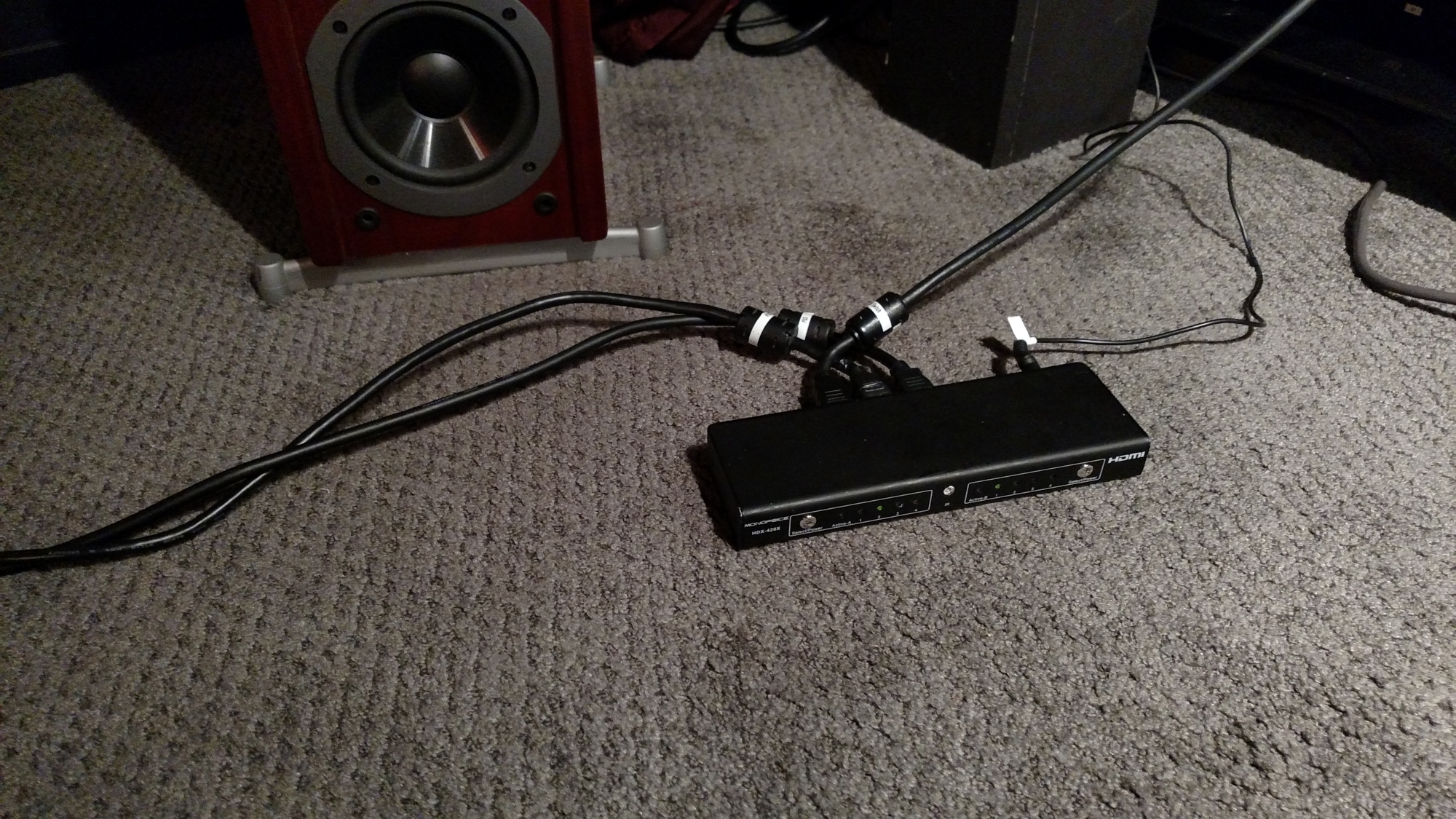 It’s not the prettiest scene in my room to have all these cables running across the floor, but it only takes a couple minutes to get the whole thing set up once I decide to use it.

With everything finally connected to my A/V receiver, I can (and have!) played games from each of these consoles on my projector. For obvious reasons, the PS3 games hold up the best when projected on a large screen. In fact, I have one title called Super Stardust 3D that has beautiful graphics and exceptional use of 3D. That’s great fun to play on the projector.

Unsurprisingly, games from the older consoles struggle when blown up to a large image size. Xbox titles look pretty fuzzy, but are at least watchable. The NES stuff, however, is best played on a much smaller screen.

To that end, I have a 32″ TV that I can fairly easily plop down on top of the gaming cart. The old games look better on that, and it spares me from wasting lamp hours on my projector. My kids also get overwhelmed by the projector screen and actually prefer games on the smaller TV anyway. The TV is a 3D model, so I can still use that feature if I want. 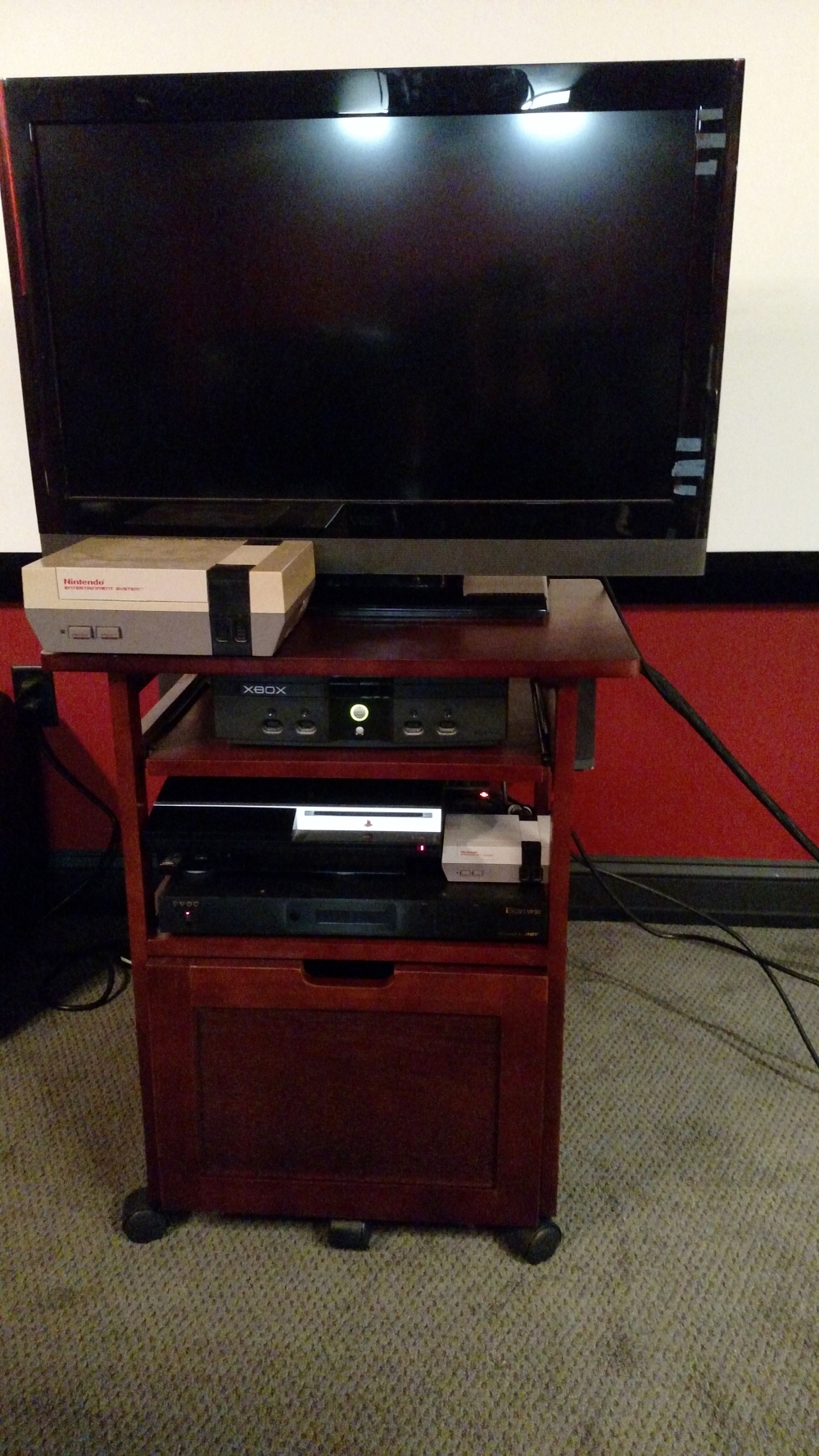 Using this necessitates running another HDMI cable back from the equipment rack over to the cart, which is a little awkward having cables going both ways, but it’s worth it to hear all the audio through my home theater speakers. The Xbox and PS3 games have very aggressive 5.1 soundtracks.

My boys aren’t particularly skilled at playing video games yet, but they like racing games. A PS3 title called MotorStorm: Apocalypse is a particular favorite of theirs. It has nice graphics and allows them to drive all manner of vehicles through the middle of earthquakes, tornadoes, and other cataclysmic disasters. One of them has almost gotten good enough that he only crashes about 150 times before getting to the end of a level, which is a big improvement over where he started. The other one has a sadistic streak and enjoys intentionally crashing so that he can watch the little digital character go flying off a motorcycle. It takes him about 20 minutes to complete a level that should be done in three.

I’m still partial to the NES games, but I’ve gotten really rusty at playing them. There was once a time when I could beat the original Mega Man without losing a life. Lately, it takes me about 30 tries to get past the Guts Man level without falling to my death. I’m determined to get better at that.

On the Xbox, I’ve enjoyed revisiting 007: Everything or Nothing. License-based video games have a problematic history and usually suck (Brian wrote a post back in 2012 that sheds some light on why that happens), but this was one of the better ones. The graphics are respectable for Xbox, the gameplay is pretty good, and the whole thing feels legitimately James Bond-y. Pierce Brosnan voices the character, and the game even has a fun opening credits sequence with a theme song by Mya.

I’ve had fun playing these old games, but I doubt they’re going to turn me into a hardcore gamer anytime soon. These are about as complicated as I feel like getting, and I have zero interest in ever playing online with other people.

Do any of our readers still play vintage video games?