The saga of the retro-style ‘Alien’ ReAction figures is long and requires much patience from fans. Nearly a year since it was first announced and opened for preorders, the Egg Chamber Action Playset has finally arrived. I debated whether to leave this sealed in the box as a collectible, but ultimately couldn’t resist and had to pop it open.

Here’s a quick summary to give you a sense of how slowly this line moves:

That brings us to now. The Egg Chamber is here in my hands. Although this is a newly-designed piece, it’s very much in keeping with the retro aesthetic of the ‘Alien’ figures. From the packaging to the cheap cardboard backdrop, this looks like a toy that could have been produced in 1979. I say that as a compliment. It blends seamlessly with the ‘Alien’ figures, and is a higher quality product than the other ReAction spin-off lines.

Props to Super7. Even the shipping box that the playset arrived in has a cool ‘Alien’ logo. I don’t want to throw this out. 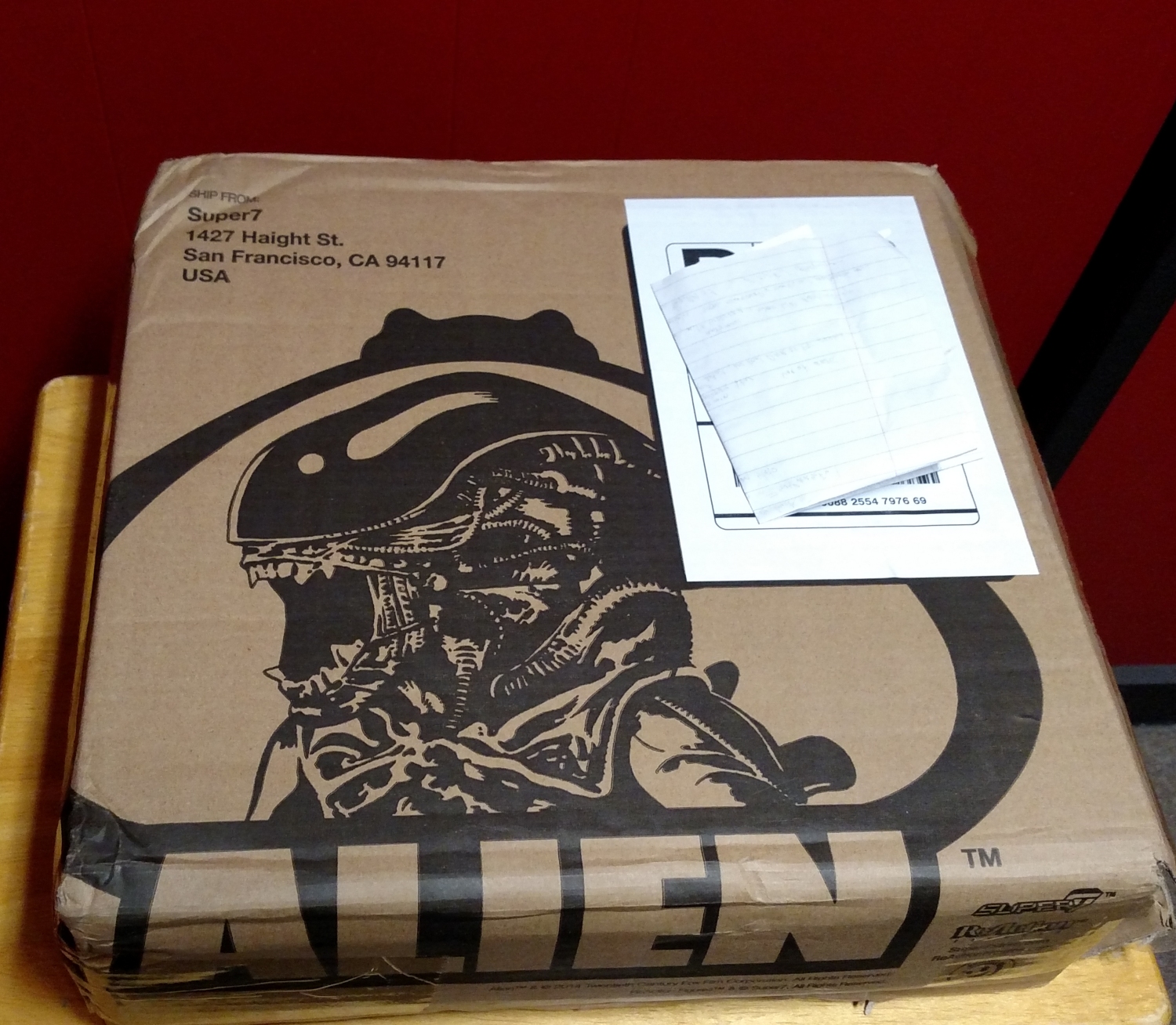 The box for the playset was covered in bubble wrap. 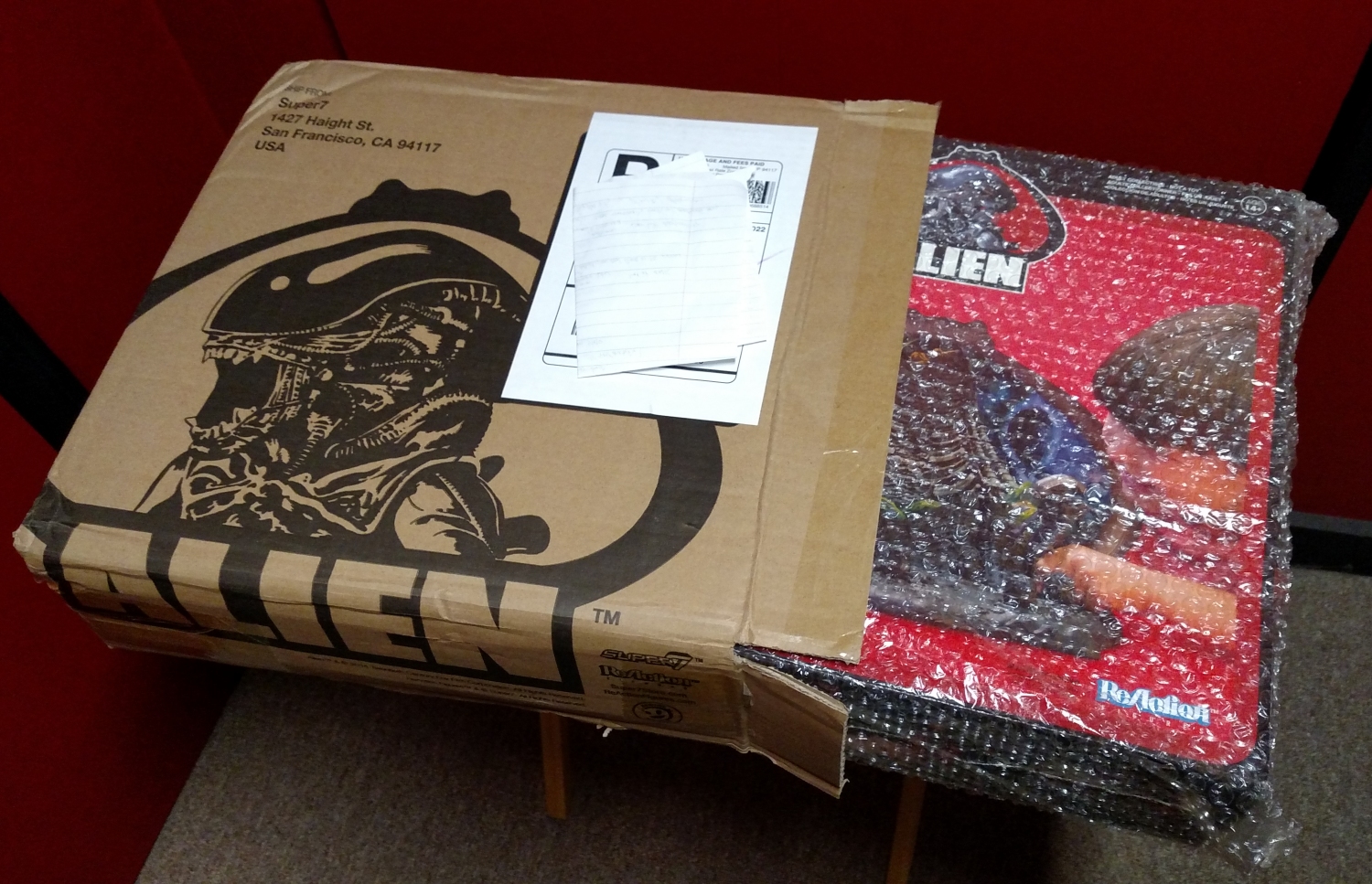 Unfortunately, that wasn’t enough to prevent the box from getting dented and dinged. 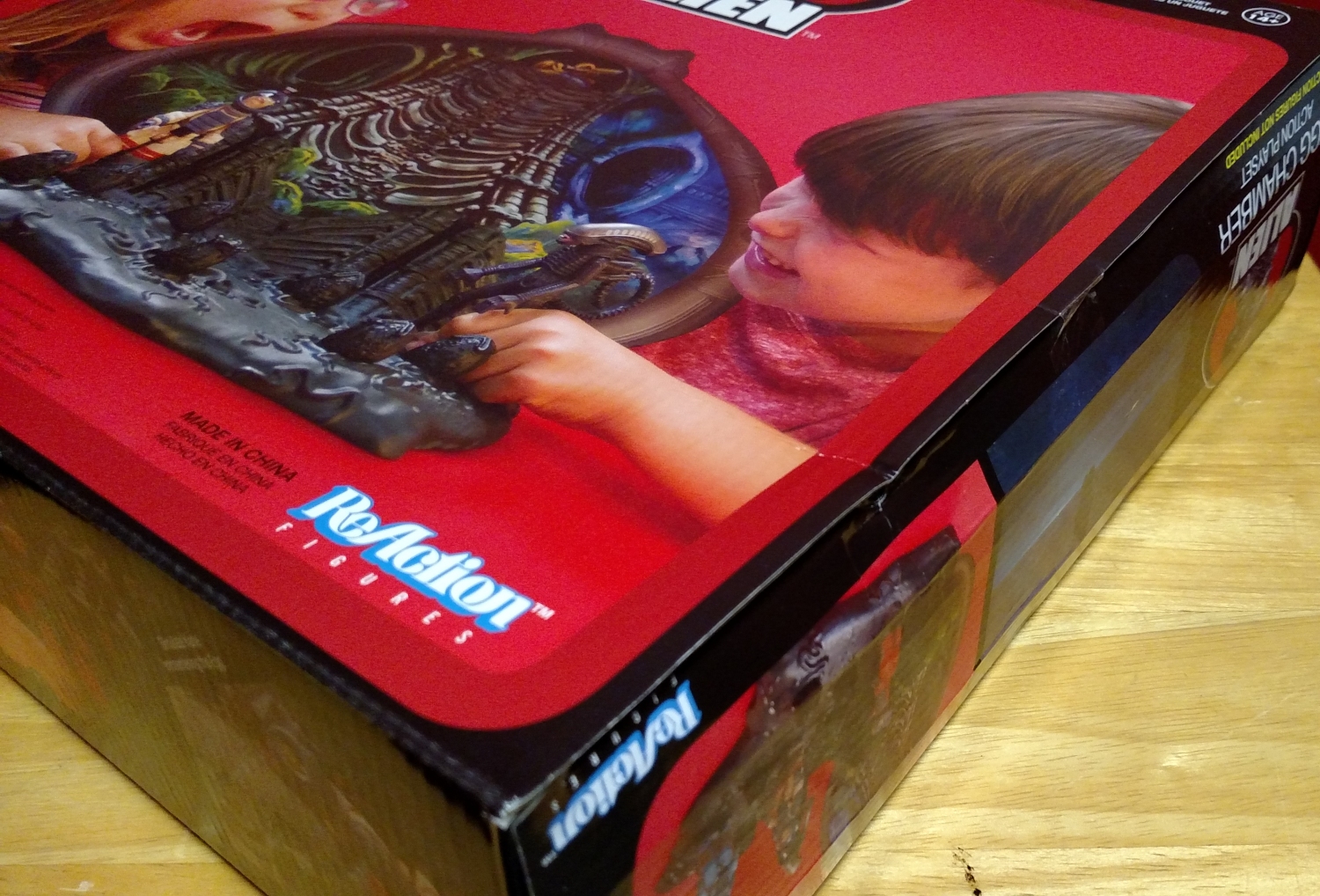 I’m very disappointed in that. On the other hand, the damage makes the box look even more like an artifact from 1979.

The front and back of the box have the same image: 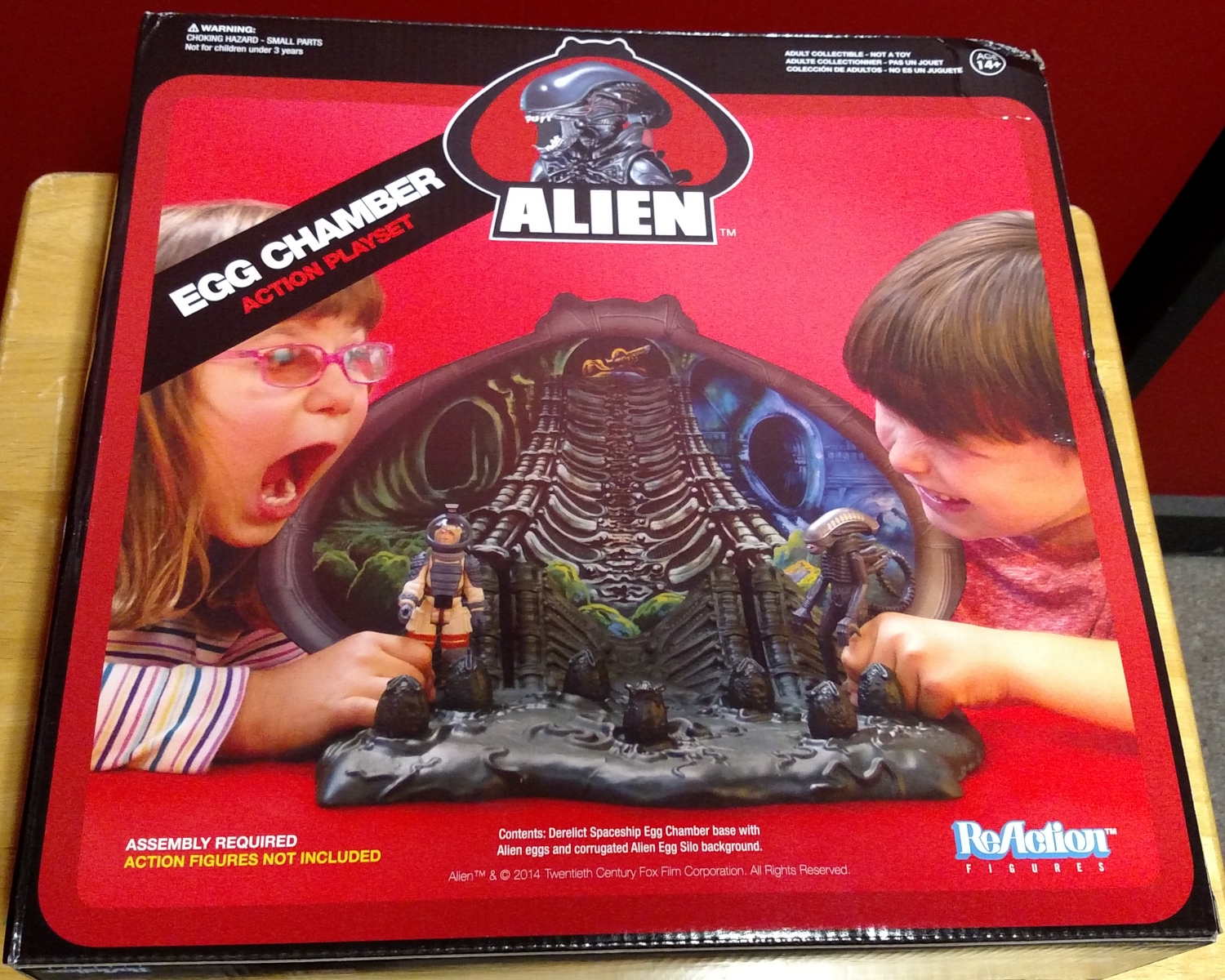 I love that the kids look like they’re straight out of the 1970s. The screaming girl is great. I also think it’s fantastic that the box shows little kids playing with this toy right beneath a disclaimer that this is an adult collectible for ages 14+. 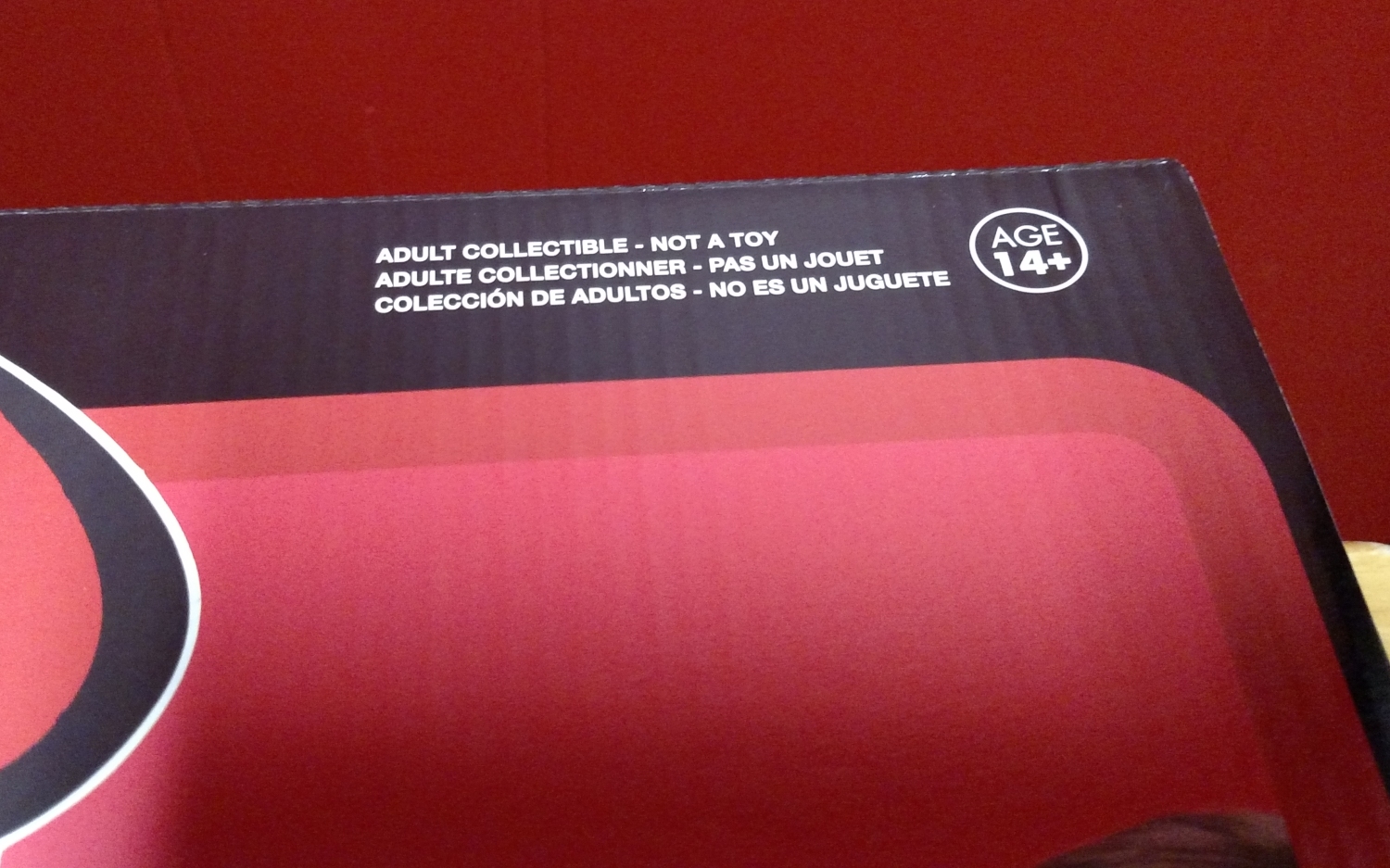 The artwork on the left and right sides (seen above) is likewise duplicated, as are the top and bottom. The photos show what looks like Dallas in an orange space suit and someone else in a blue space suit. These must be prototypes for things we’ll see in the future. 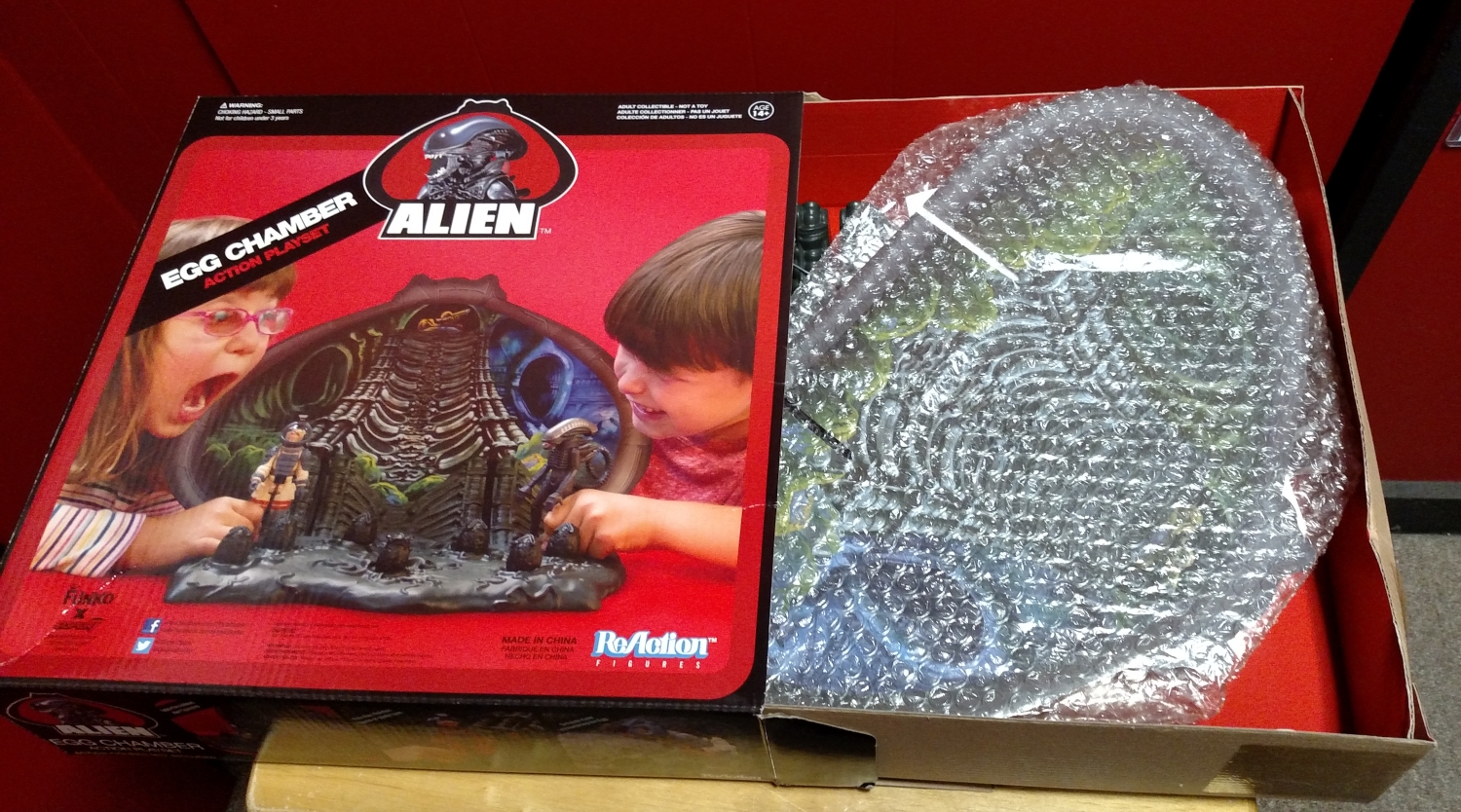 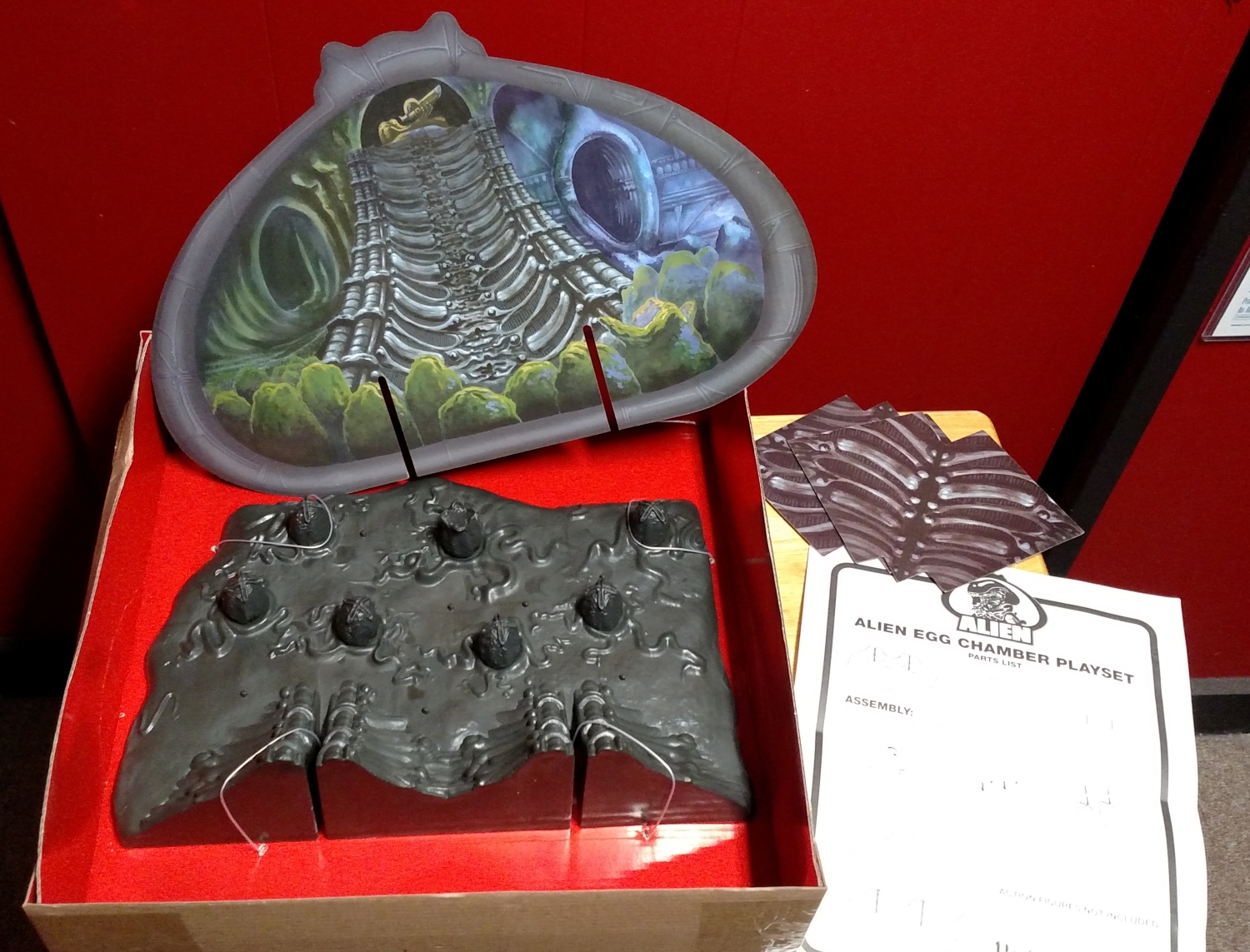 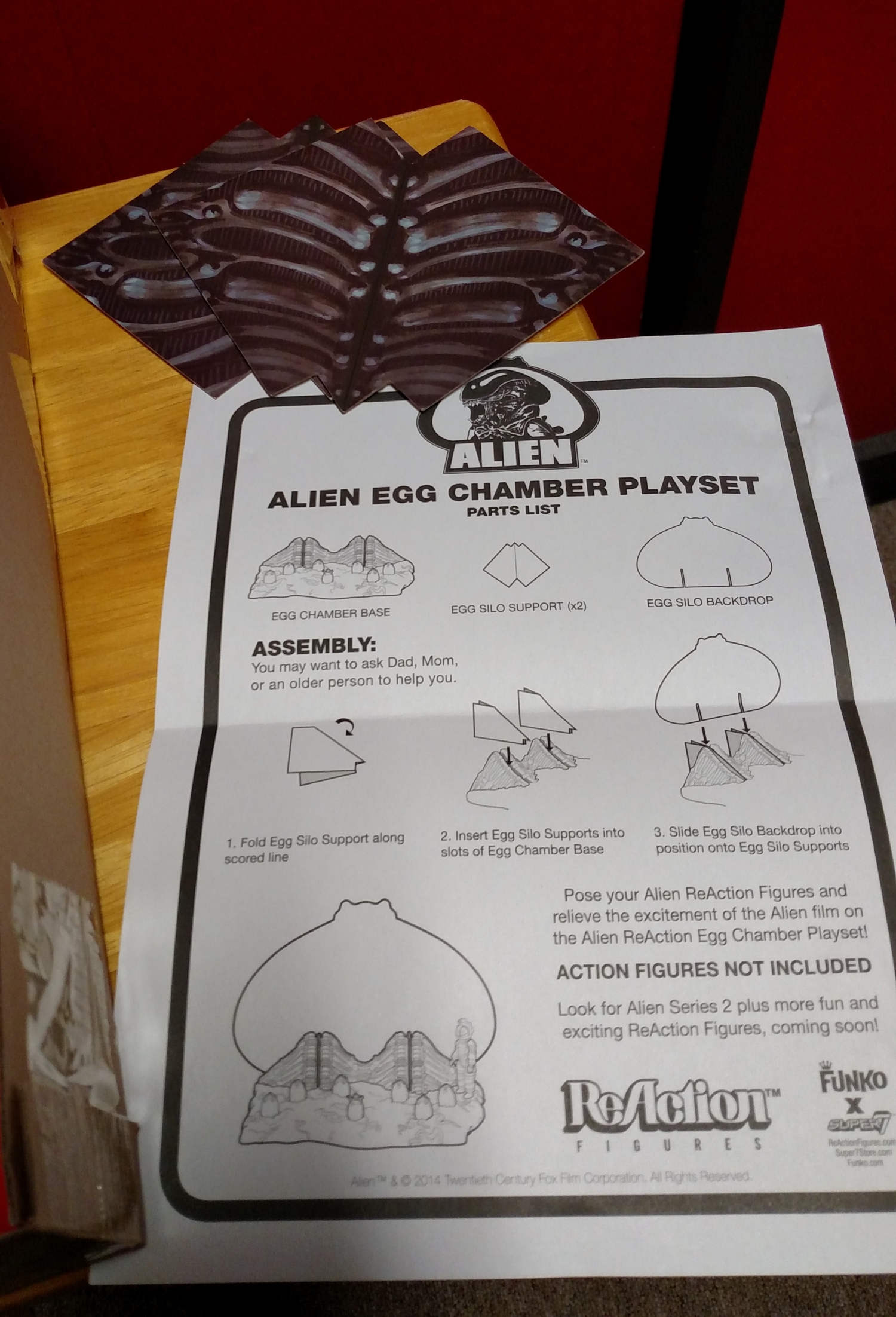 Assembly only takes a moment. 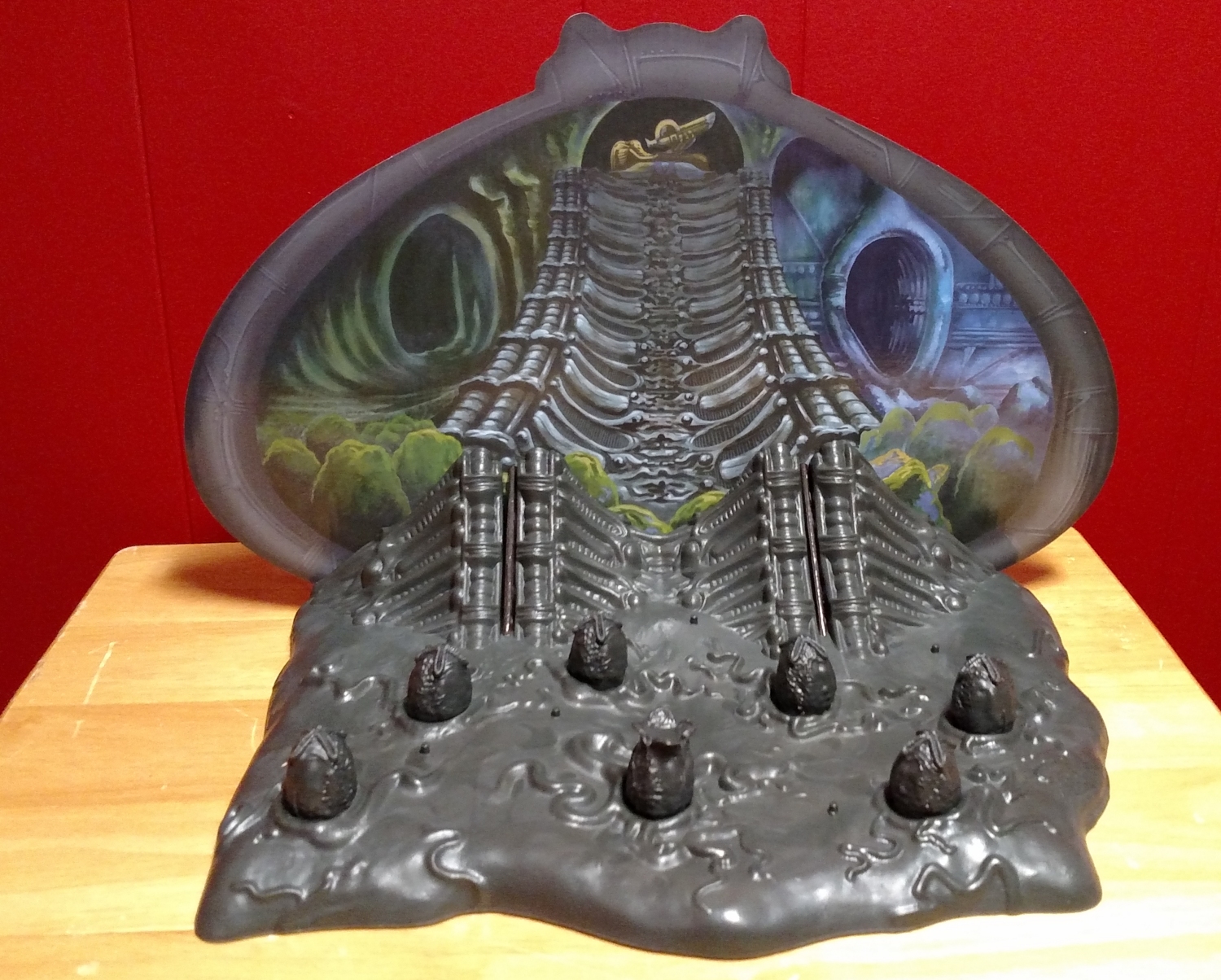 I’m not particularly a fan of the way the cardboard support legs stick out the back. This will prevent you from placing the playset flush against a wall unless you remove the supports. 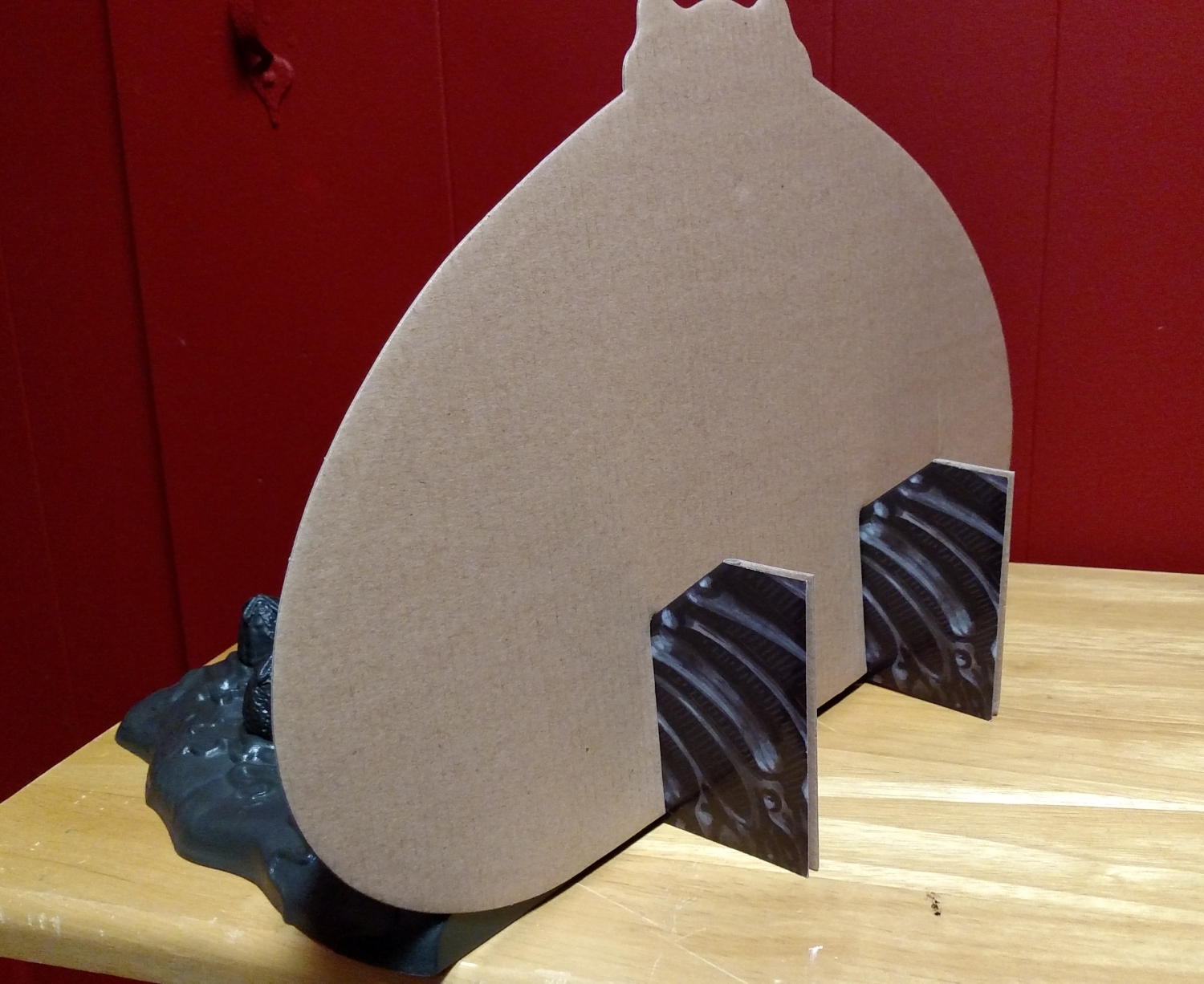 I wound up attaching a couple of small stick-on hooks to the bottom rear of the base that the cardboard backdrop can slide into. It’s good enough that the backdrop stays in place when pressed against a wall.

Oh no! Kane has entered the Egg Chamber to investigate the eggs. Be careful, Kane! 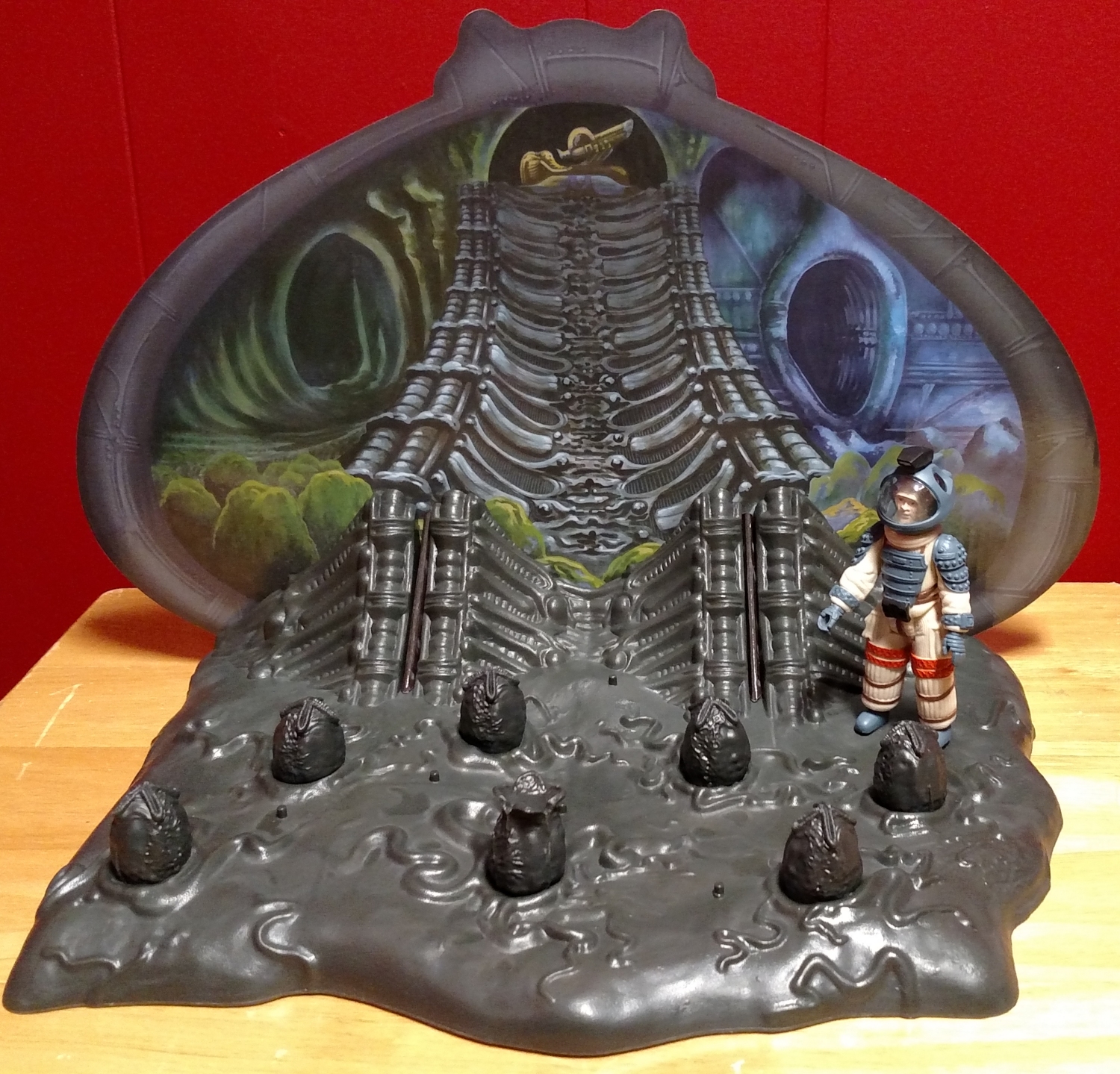 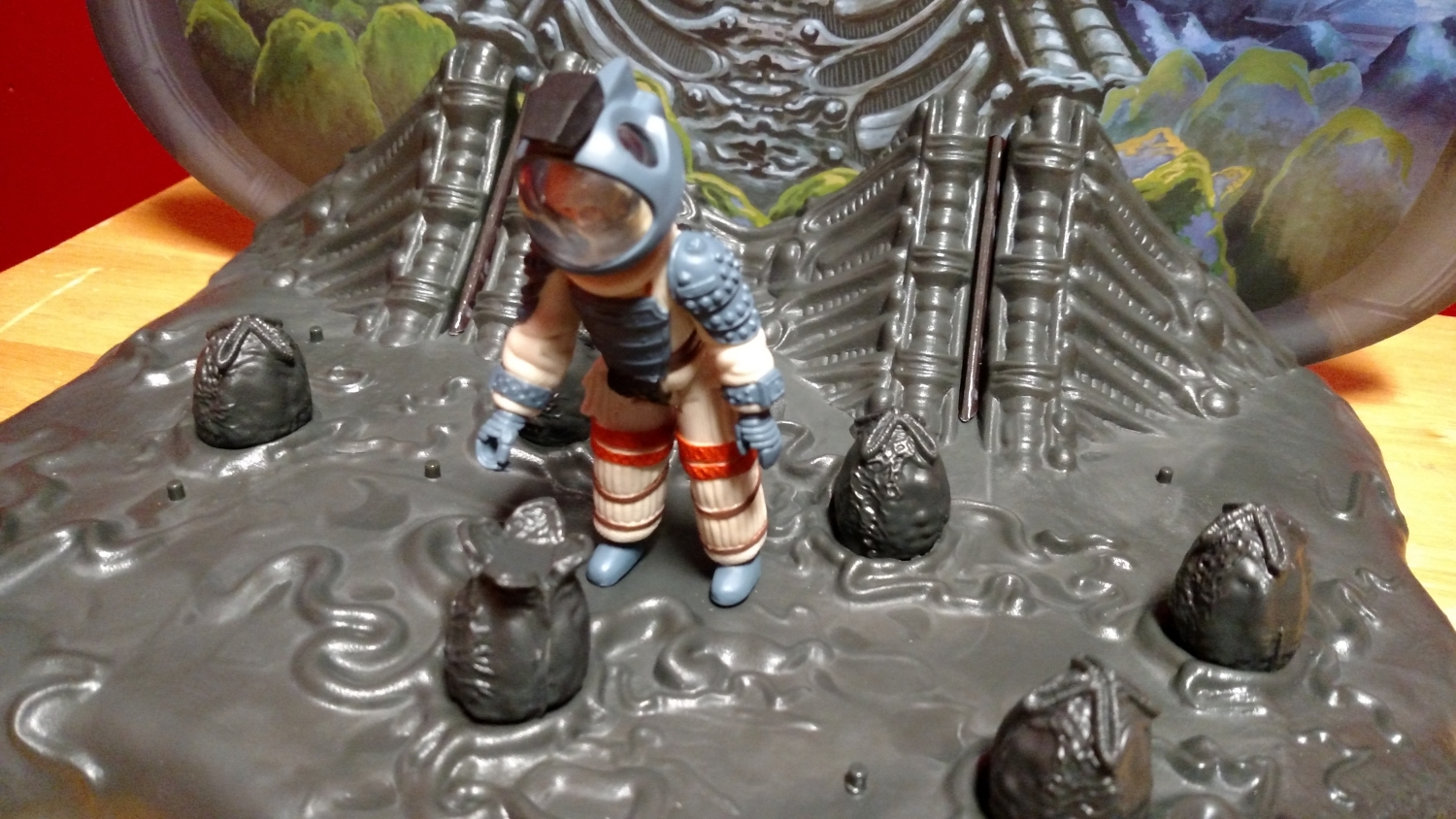 Fine, this last shot may not be movie accurate, but I needed a photo with the whole Nostromo crew in there. 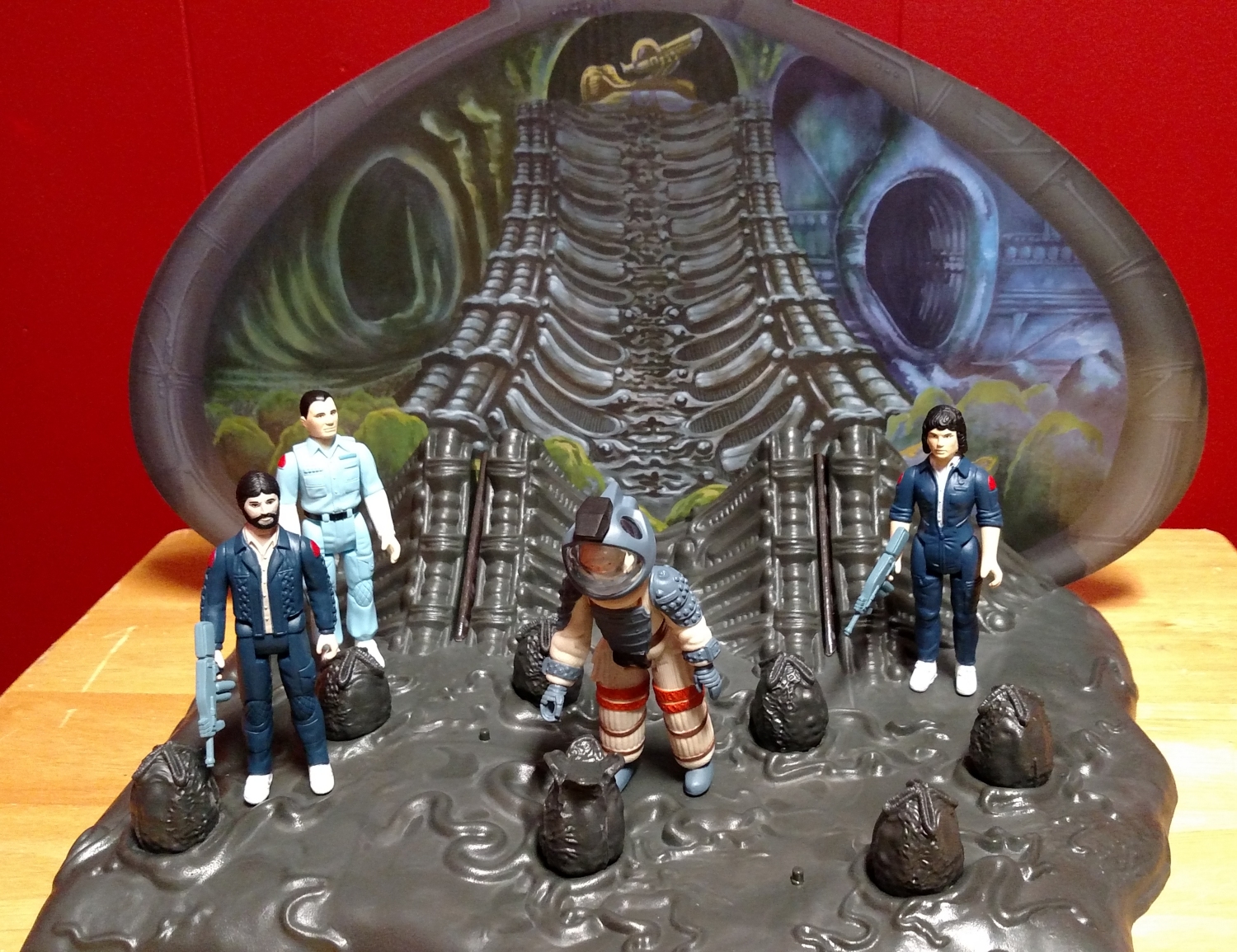 Despite being overpriced and long overdue, I think this playset is pretty awesome. I’m glad to have it. I would love for Super7 to produce a Nostromo dining hall playset next.