Once upon a time, in New York to be precise, Quentin Tarantino had a movie join the Criterion Collection… just one, though, and only on the Laserdisc format.

Tarantino’s first movie, Reservoir Dogs, made him an instant indie darling. His second, Pulp Fiction, catapulted him into the strata of A-List filmmakers. A blockbuster smash and an Oscar nominee in seven categories (of which it won for Best Original Screenplay), the movie was positively a cultural phenomenon. For years afterward, every aspiring young filmmaker wanted to be Quentin Tarantino.

As a former video store clerk and an unabashed movie nerd, Tarantino was a big fan of the Laserdisc format in its heyday. In home video terms, there was no greater honor for a director than to have a movie enshrined in the Criterion Collection with a deluxe LD box set. As such, he was thrilled to work with the company on Pulp Fiction.

The movie had already gotten a basic Laserdisc release through Miramax Home Entertainment in late 1995. The Criterion edition followed in June 1996, at a whopping list price of $124.99. Encoded in CAV format with only a half-hour of video per side, the 154-minute feature was spread to six sides across three discs. Supervised by Tarantino, the Criterion release had a THX certified video transfer (at a time when that meant something) and a Dolby Digital AC-3 5.1 soundtrack, which was still pretty new and novel. Tarantino also curated a selection of bonus features for the set, including deleted scenes, behind-the-scenes footage, and a lengthy Charlie Rose interview. However, he chose not to record an audio commentary, even though that was expected of him. (Most of this content eventually made its way to the Blu-ray from Lionsgate as well.)

In physical terms, the Criterion edition is not quite as elaborate as some of the deluxe Laserdiscs from Disney and the like. The discs are stored in a simple box with cover art chosen by Tarantino. 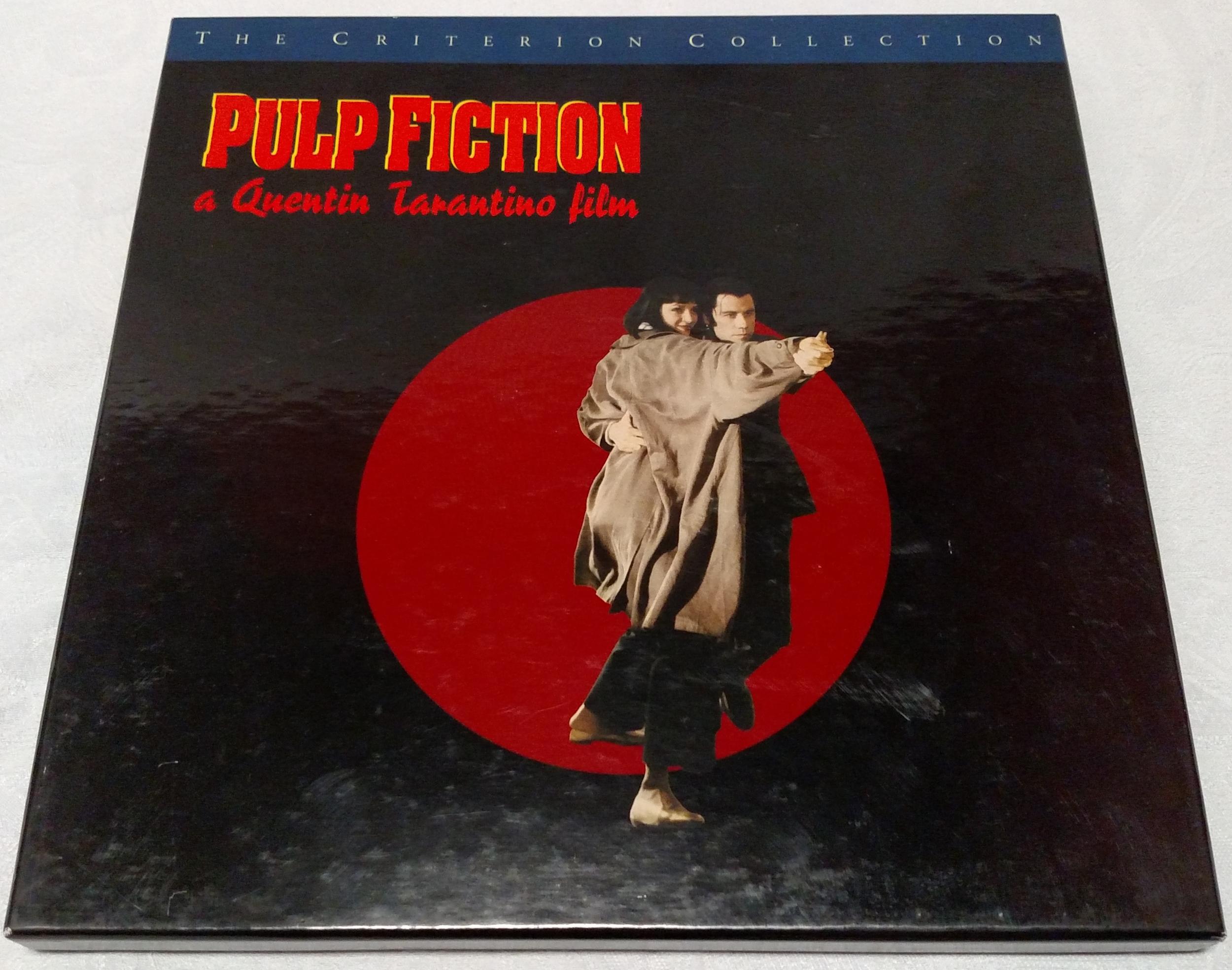 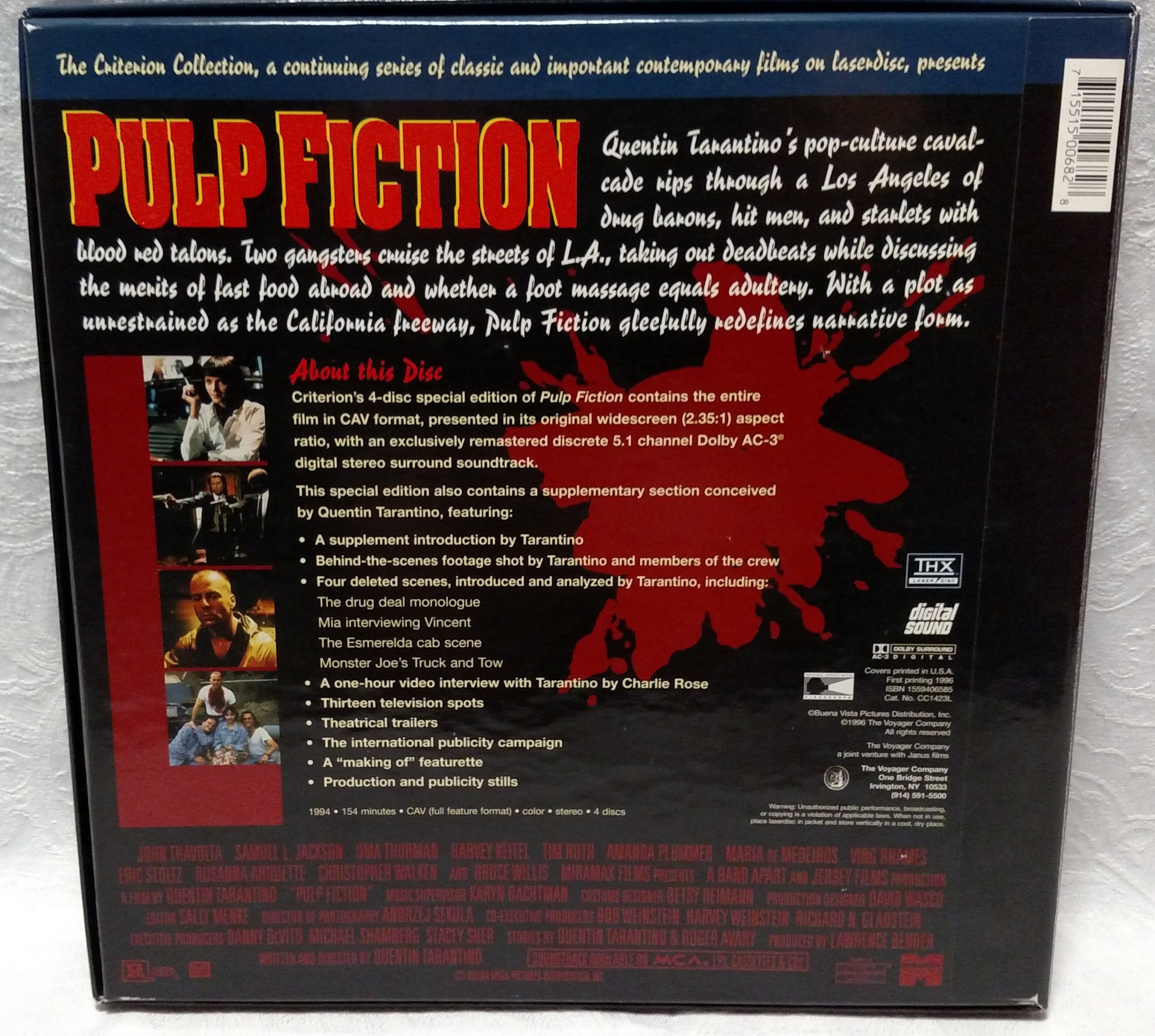 The front and back halves of the box open on a hinge. Inside are four Laserdiscs (one for supplements in CLV format) and an insert booklet containing an essay by New York Times film critic Janet Maslin. If you click on any of these photos to enlarge, you should be able to read the text. 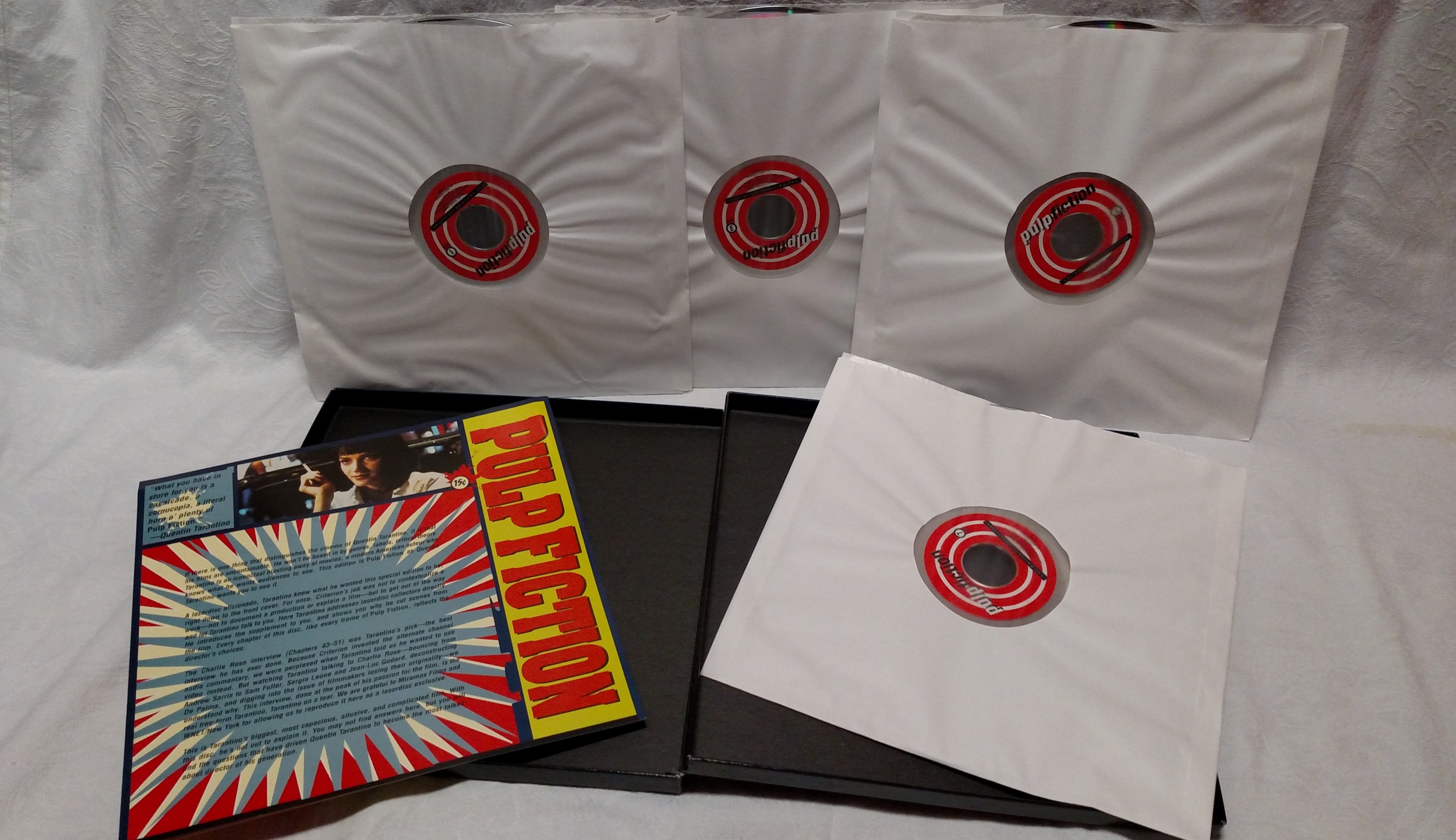 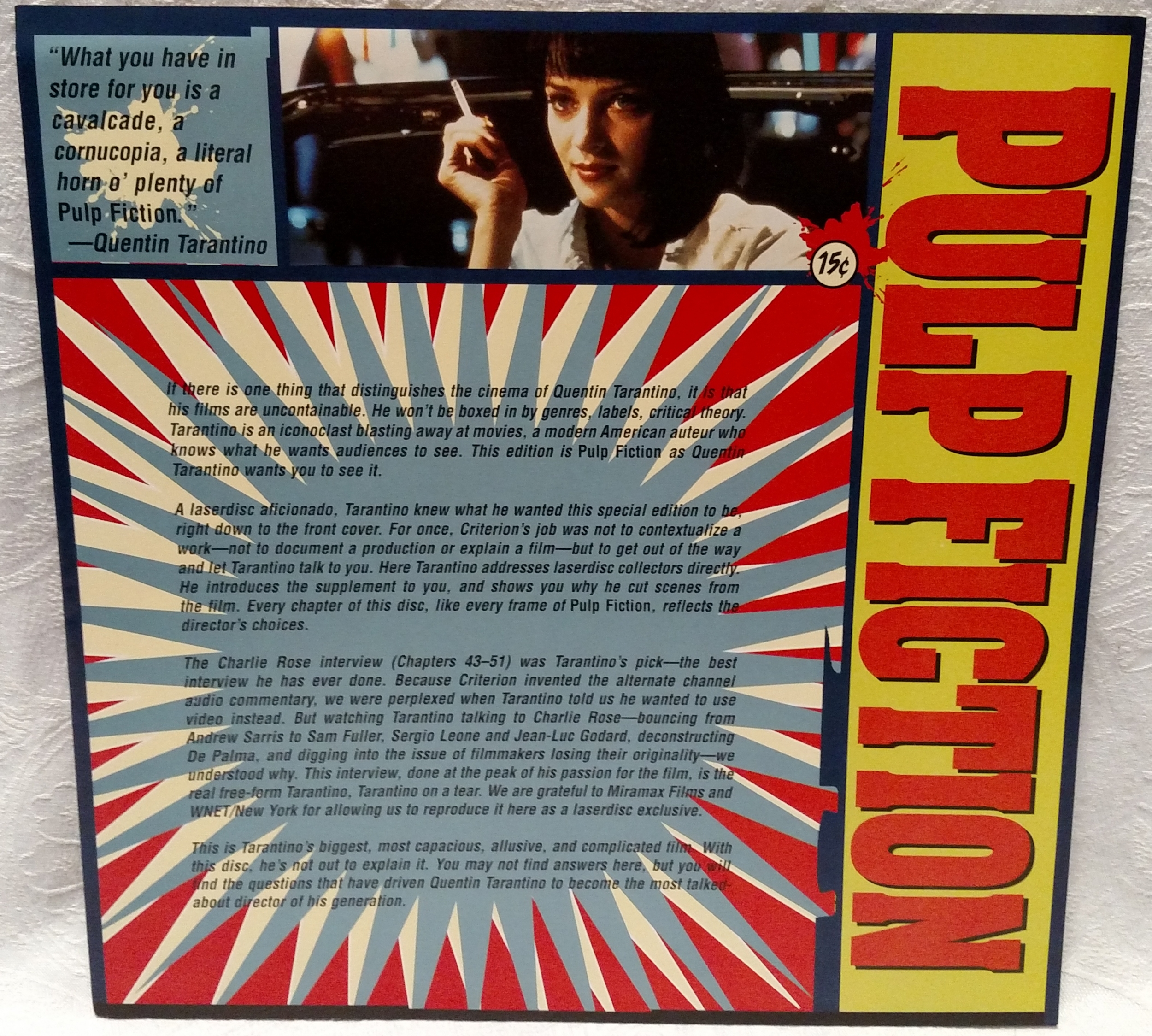 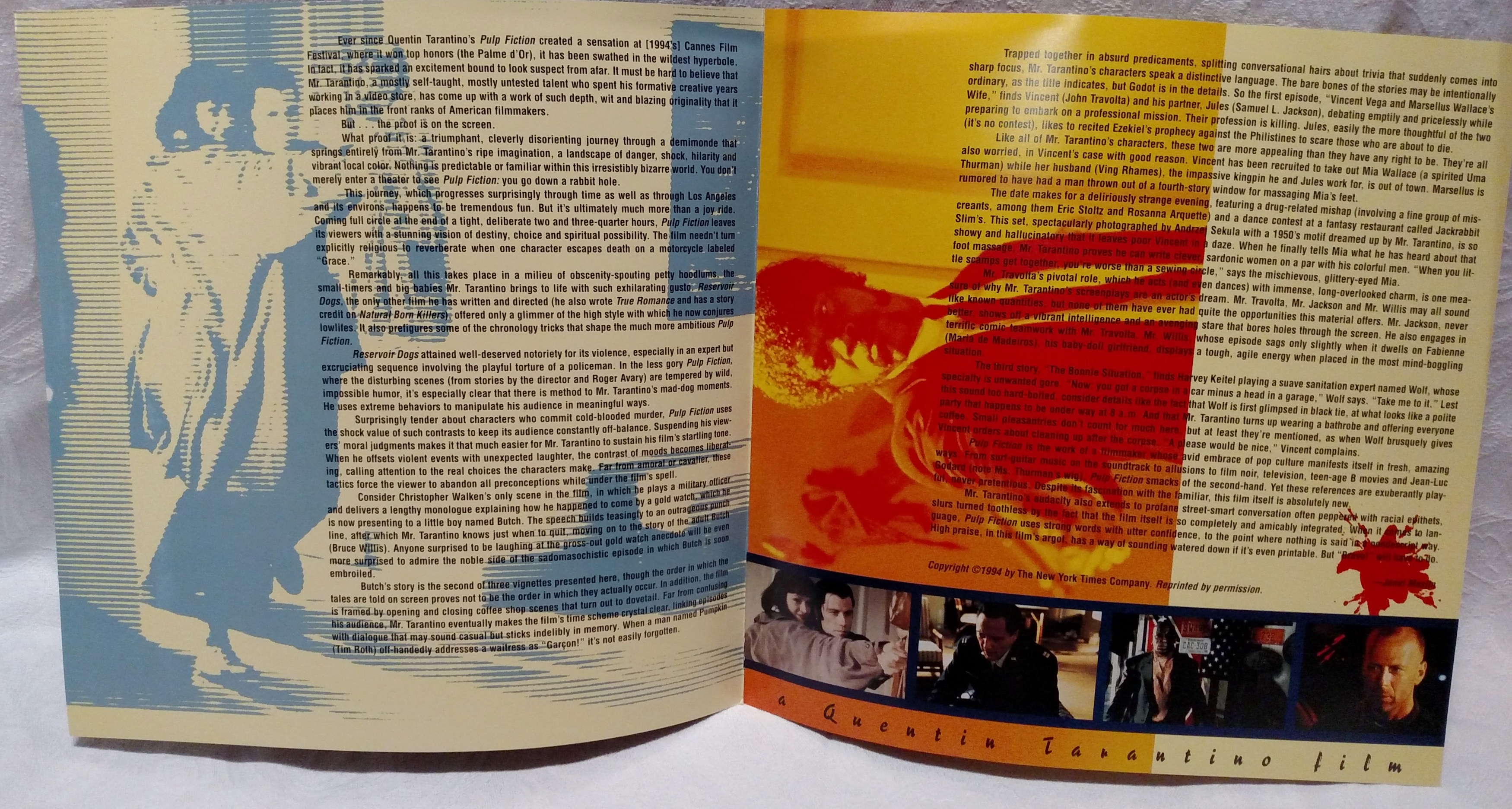 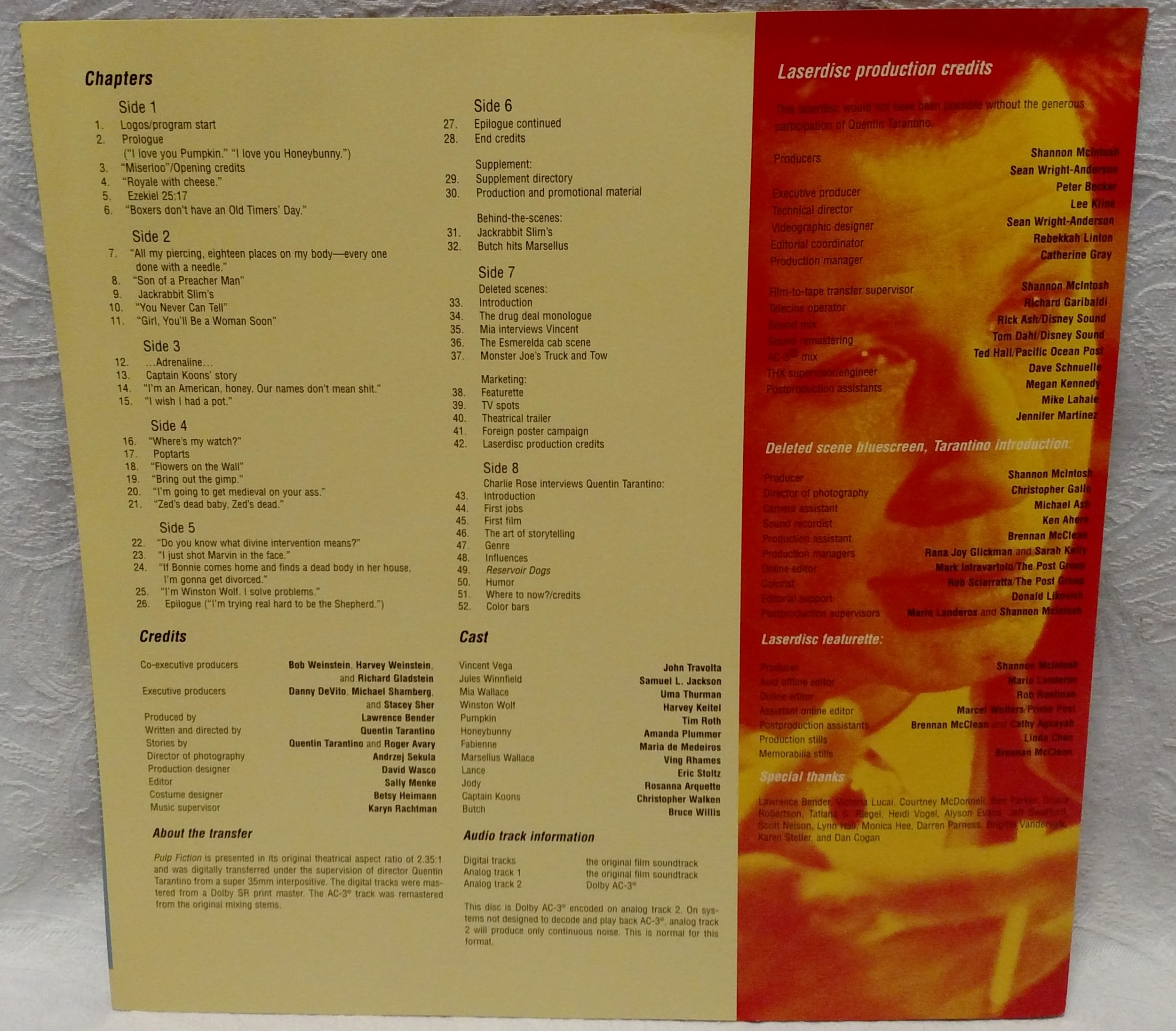 Pulp Fiction is the only Tarantino movie to date to get a Criterion release, and it only exists on LD. By the time the DVD revolution hit, the Hollywood studios became much more reluctant to license their prestige properties to Criterion, preferring to keep them all in-house.

As a special bonus, at the time I pulled the Criterion box off my shelf, I discovered that I also still owned another LD edition of Pulp Fiction that I’d forgotten about.

As you can imagine, the desire among fans and LD collectors to own a copy of a hot title like Pulp Fiction was very high. A full seven months before Miramax put out its first LD release (and over a year before Criterion), the movie appeared on the format in Japan from a label called Amuse Video. Copies were heavily imported in the United States and could be found on the shelves of most LD retailers, including Tower Records.

The Japanese release was a simple CLV edition split to three disc sides, with only a few trailers for bonus content. The video transfer had non-removable Japanese subtitles on screen, but positioned entirely in the lower letterbox bar where they were fairly easy to ignore. The soundtrack was encoded in PCM 2.0 surround. Although Criterion bettered it later, this was more than sufficient to satisfy the needs of impatient fans.

The Japanese LD remains a nice collectible for its handsome gatefold jacket. (Those creases on the front cover are part of the artwork design.) I imagine that it should be pretty appealing to vinyl music collectors as well. 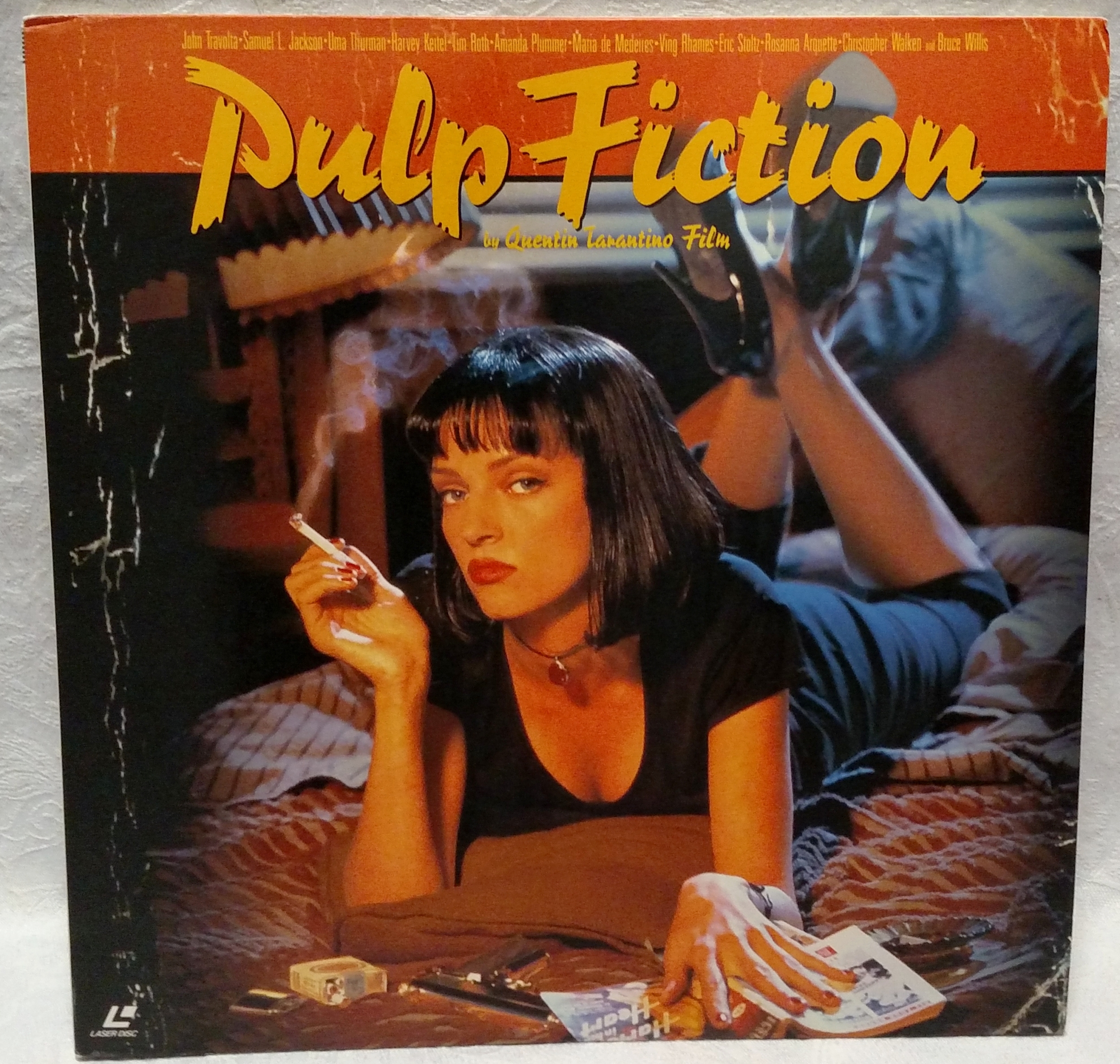 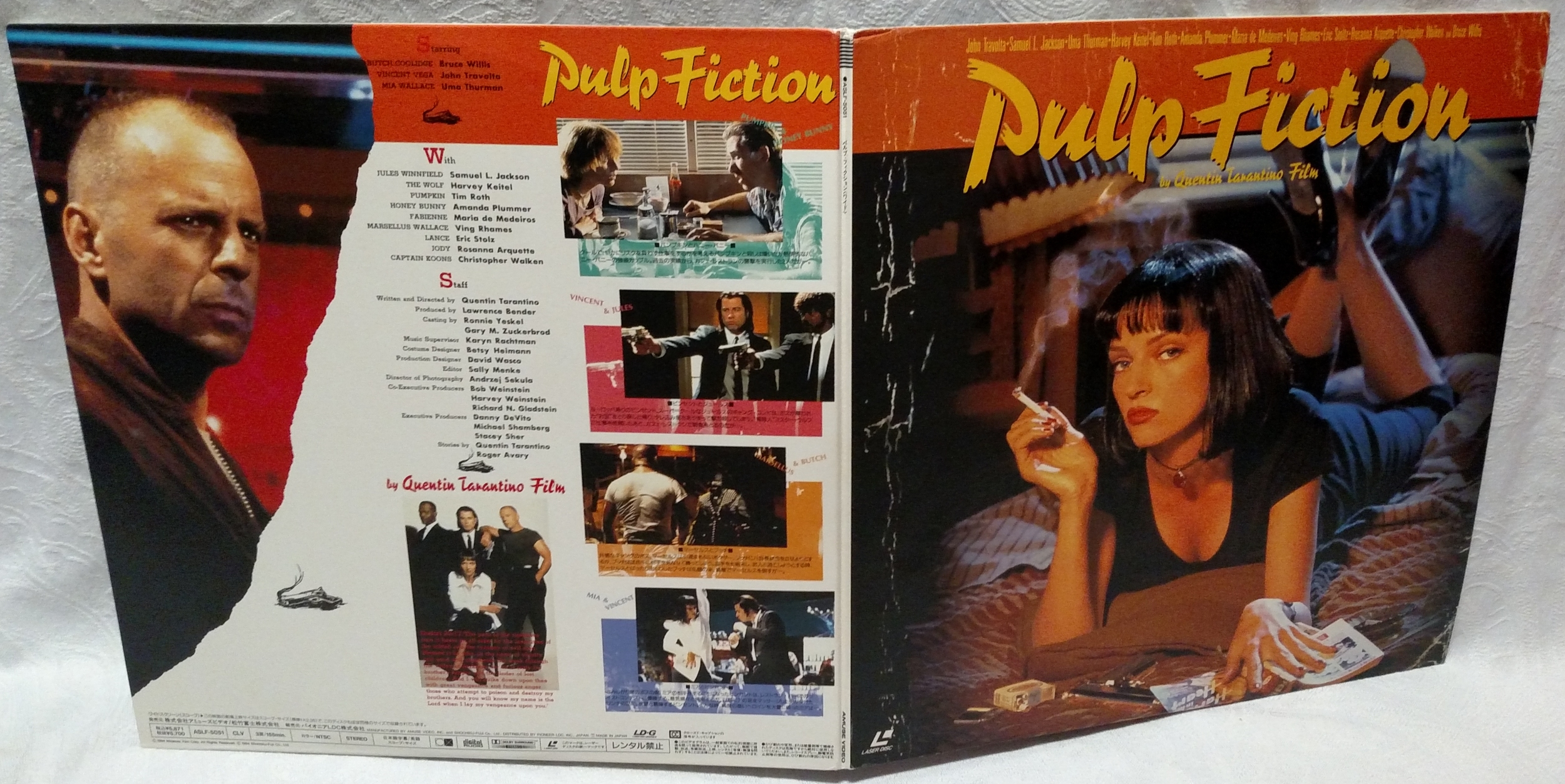