As the Terminator franchise rolls out a new movie, I’m compelled to revisit the earlier entries across the multiple home video formats I’ve collected.

I’m not going to pretend to have a comprehensive Terminator collection. I’m sure some hardcore fan out there must own every video edition known to man (as I must with certain other movies). Nevertheless, I’ve amassed a fair number of Terminator discs over the years.

James Cameron’s original 1984 The Terminator, the tiny independent feature that launched a major franchise, was released on Laserdisc multiple times, in both pan & scan and letterbox formats, starting in 1985. The copy I have is the 1995 THX remaster, which was at that time the best the movie had ever looked or sounded. (Our standards have risen considerably since then.)

The disc packaging is a standard Laserdisc jacket, but the back cover has a pretty good essay. 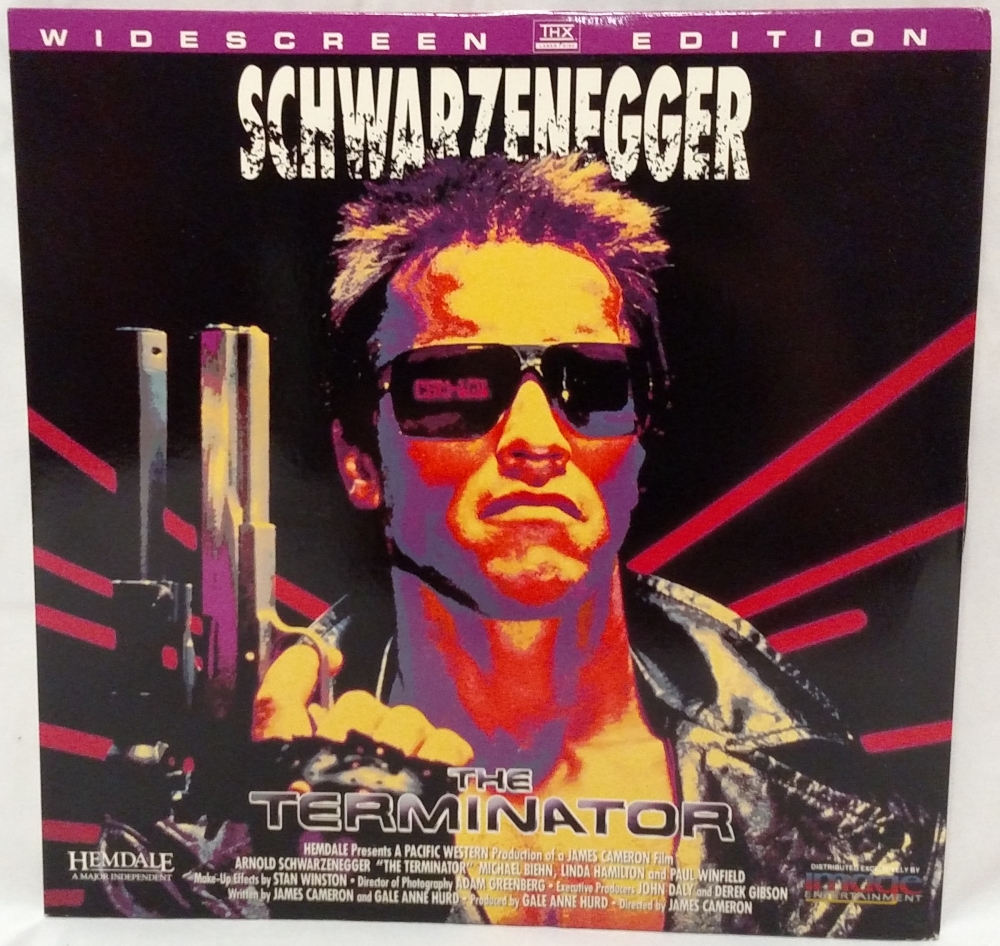 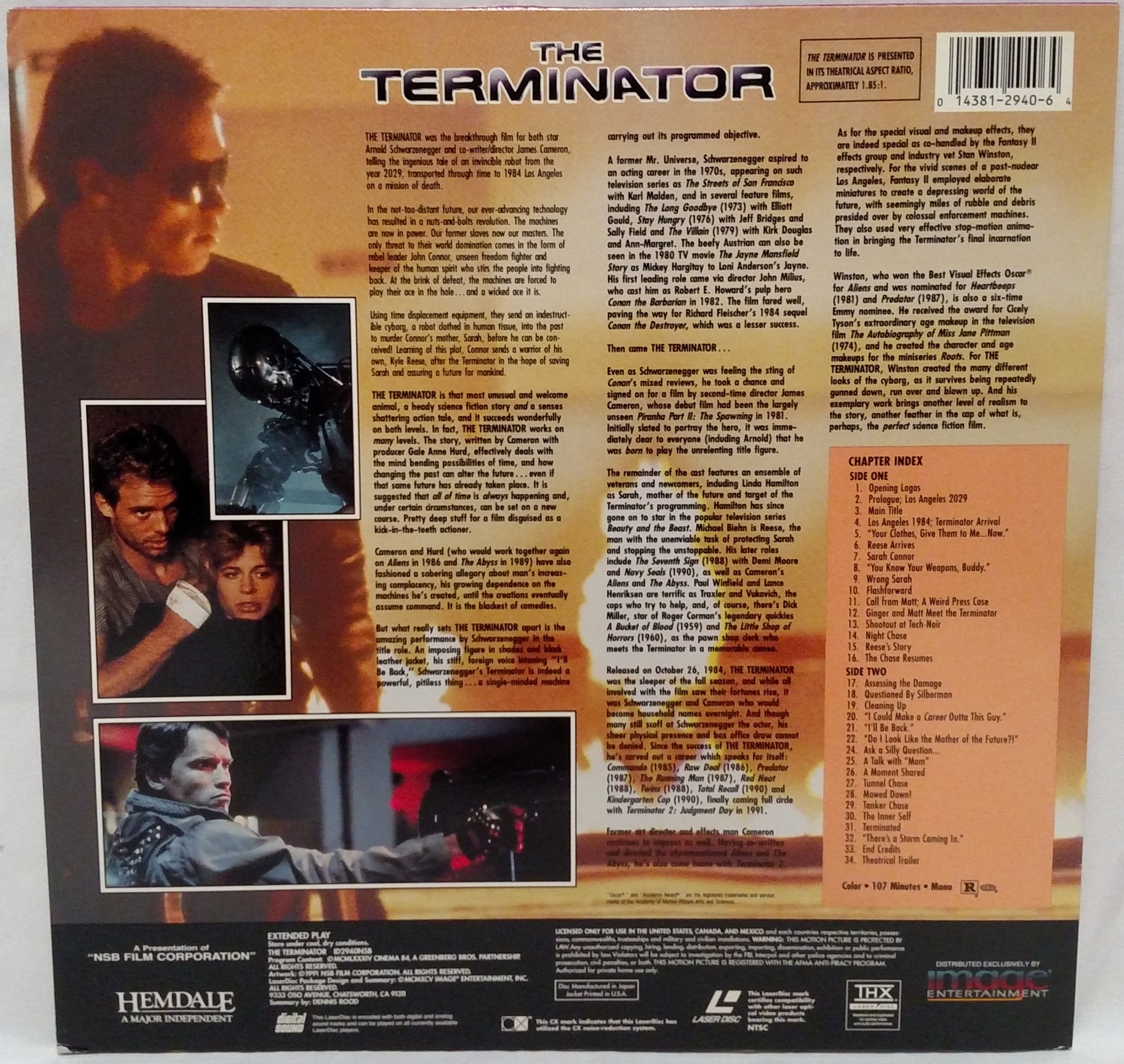 Cameron’s monster blockbuster sequel Terminator 2: Judgment Day also saw numerous releases, from pretty basic copies of the original theatrical cut to the elaborate 1993 Pioneer Special Edition box set. Often voted among the best Laserdiscs ever released, the box contained the extended Special Edition version of the movie in what was then regarded as reference quality video and audio, plus numerous hours of bonus features (one of which was the Gun N’ Roses “You Could Be Mine” music video that has never appeared on any subsequent home video release due to rights issues).

The box itself has a faux-leather shell, inside which is another slip holding three Laserdisc jackets and a booklet. 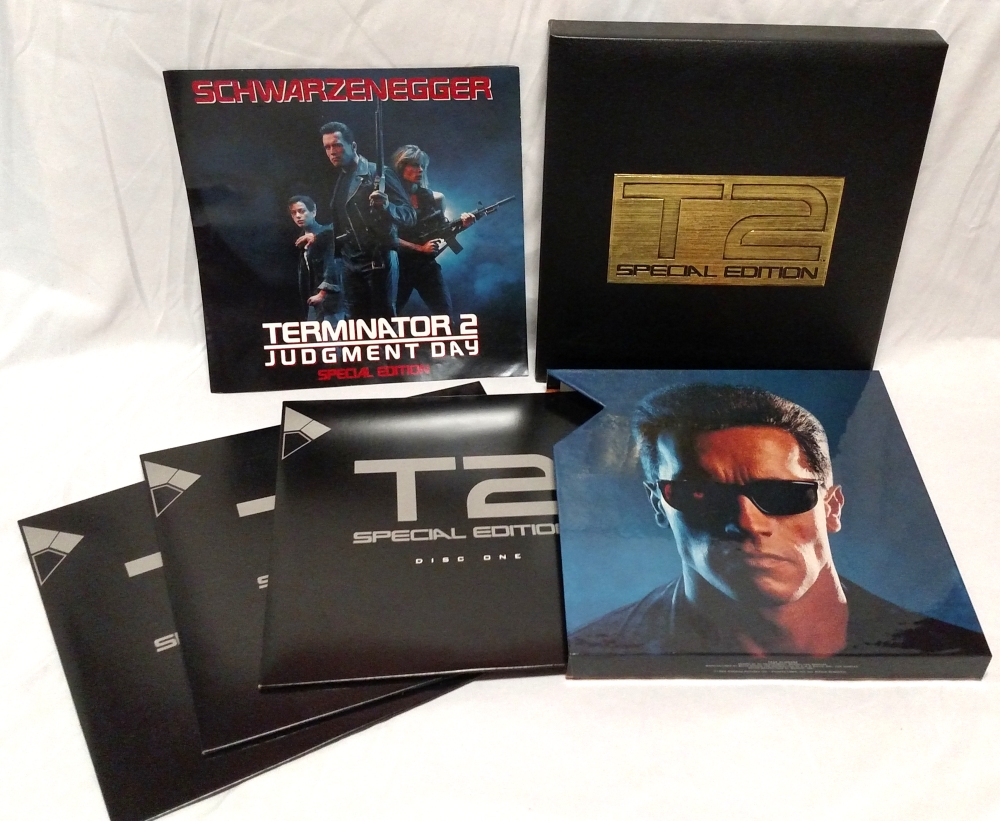 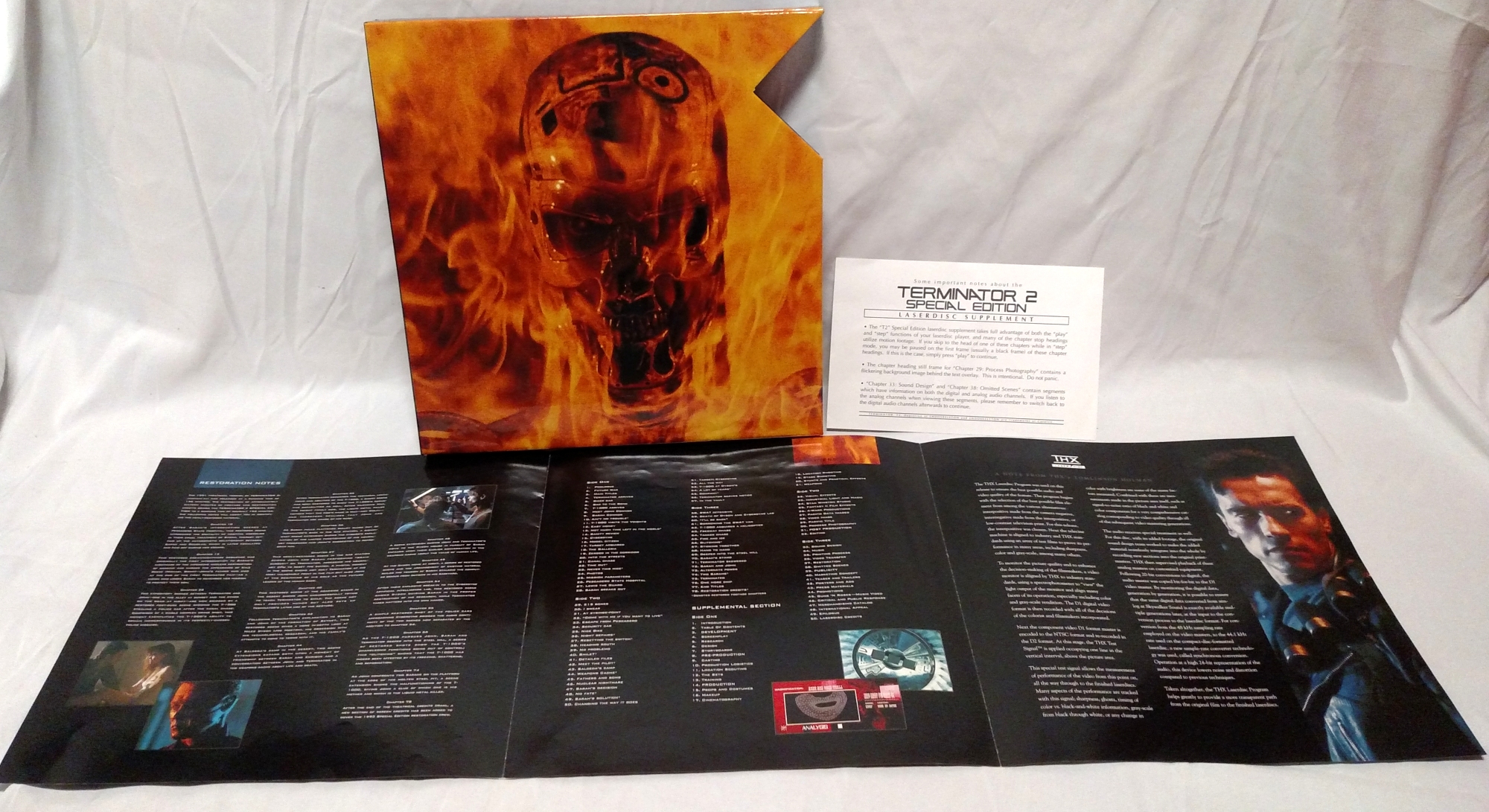 Initial copies of the box set had a silver T2 logo on the front cover. Subsequent pressings had gold, blue, or red. I believe the gold that I have is the most common.

Despite an MSRP of $119.95, the Terminator 2 box was one of the most popular Laserdiscs ever released. It was one of the cornerstone titles that seemingly every Laserdisc fan or collector owned. However, distributor Image Entertainment eventually flooded the market with so many copies that the box often lingered on store shelves and could be found at significantly reduced prices.

In the waning years of the Laserdisc format, a small handful of discs were authored with the brand new, innovative feature of anamorphic enhancement for widescreen televisions. Most of them were released in Japan, where they were known as “Squeeze LDs.” Unlike the way the feature worked on the competing DVD format, Squeeze LDs were not backwards compatible with traditional 4:3 TVs, which still overwhelmingly dominated the market at the time. Due to poor timing, the noble experiment was doomed to failure.

Terminator 2 actually had two Squeeze LD editions. Both contained only the movie’s shorter theatrical cut. The first, released in 1996, had a poor video transfer that was widely criticized. The movie was later reissued in 1998 with a THX certified remaster (the one I have) that was received much better and, for many years, was considered the standard bearer for ultimate Laserdisc picture quality. (Again, we’ve come a long way since then.) 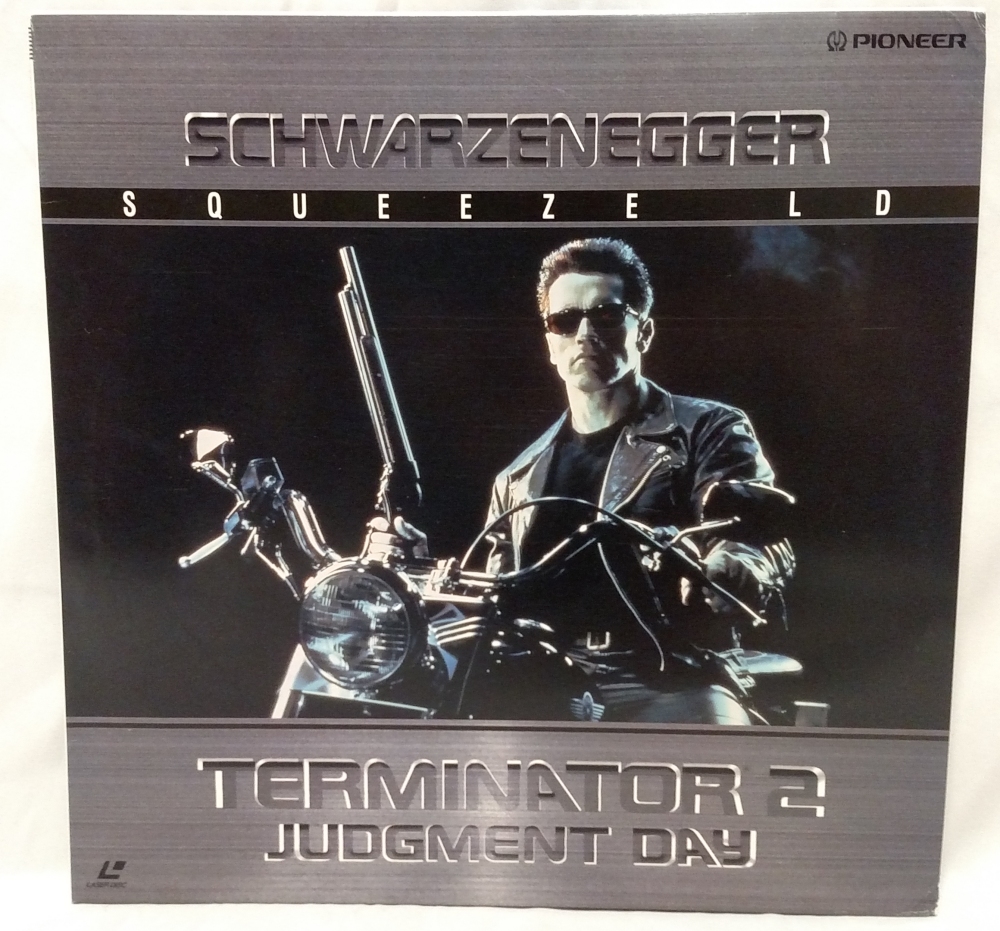 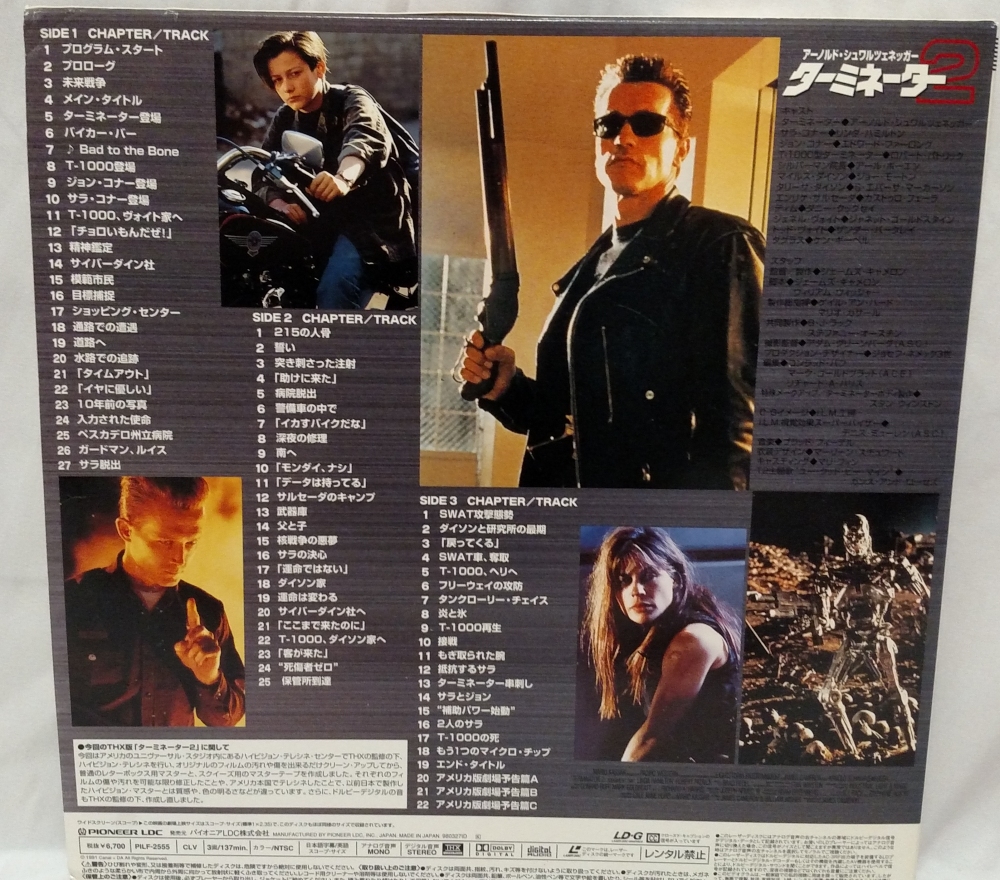 Let’s backtrack to the first movie for a moment. In 2001, MGM released a Special Edition DVD of The Terminator in the United States and some other territories that gussied up the video quality, added a bunch of new supplements, and (most controversially) remixed the soundtrack into 5.1 surround with many of the original sound effects removed and replaced with inferior substitutes. Thankfully, the original mono audio was also included, at least on the American copies.

Two years later, the film appeared in Japan as a so-called Ultimate Edition DVD that had a DTS 5.1 soundtrack. The audio was still the crummy remix with the bad sound effects (and the Japanese copy didn’t offer the original mono), but it had slightly better fidelity that some people, myself included, got duped into thinking was terribly important. Fortunately, the more elaborate packaging is nice enough that the disc is worth hanging onto as a collectible. 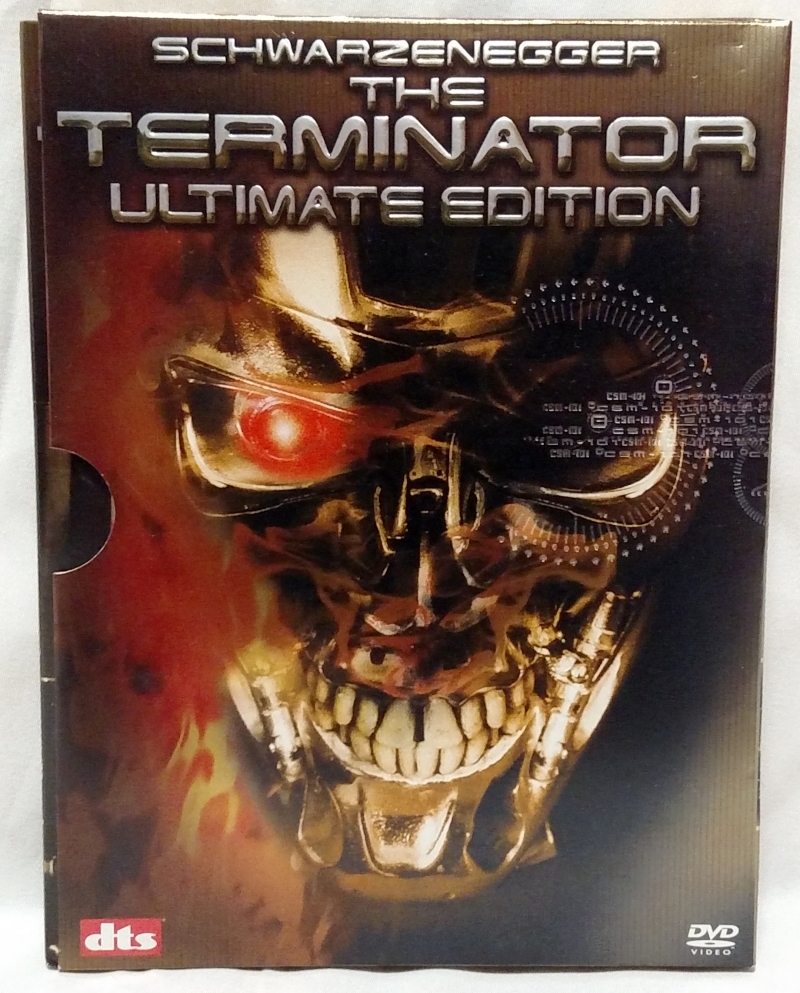 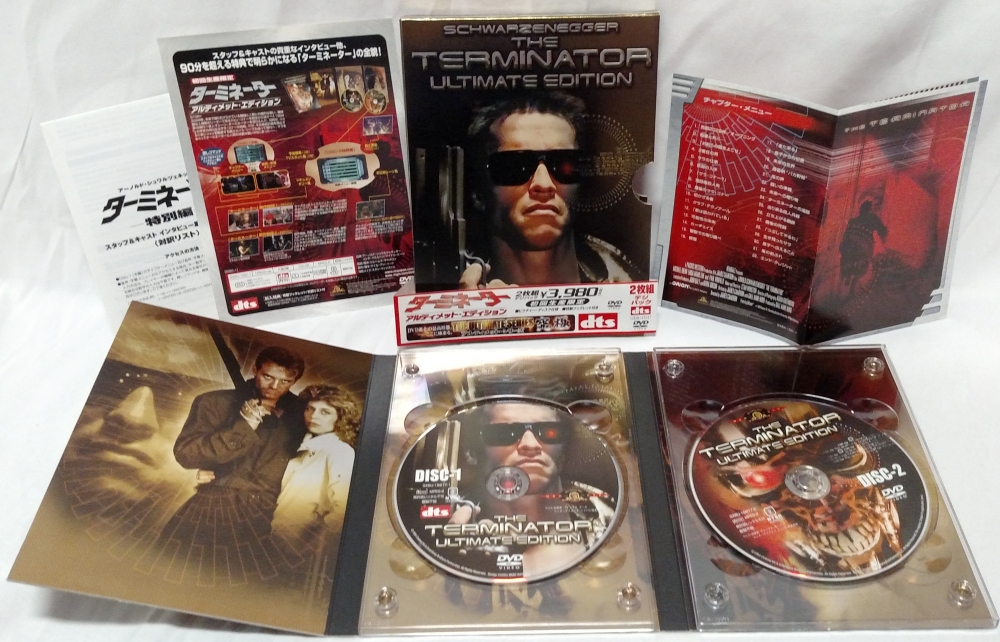 The various studios that have owned Terminator 2 have never shied from finding excuses to reissue it over and over, each time boasting some alleged improvement in quality. In 2003, the now-defunct Artisan Entertainment (later absorbed by Lionsgate) struck a new high-definition master that somehow wound up sticking around as the source for multiple DVD and Blu-ray editions to follow.

Artisan’s “Extreme DVD” contained only the Special Edition version of the movie and a handful of supplements (far less than some previous Laserdiscs and DVDs). The big selling point for the disc was the new video master, which was not only used for the downsampled DVD, but also, for the first time ever, a true high-definition copy of the movie – authored in 1080i resolution and only playable on a computer with Windows Media Player 9. Getting that version to work was a fairly big pain in the neck, and it only had slightly better picture quality than the DVD, when it wasn’t constantly freezing or stuttering.

The DVD discs are stored in a keepcase with an embossed tin slipcover that dents and scratches very easily. 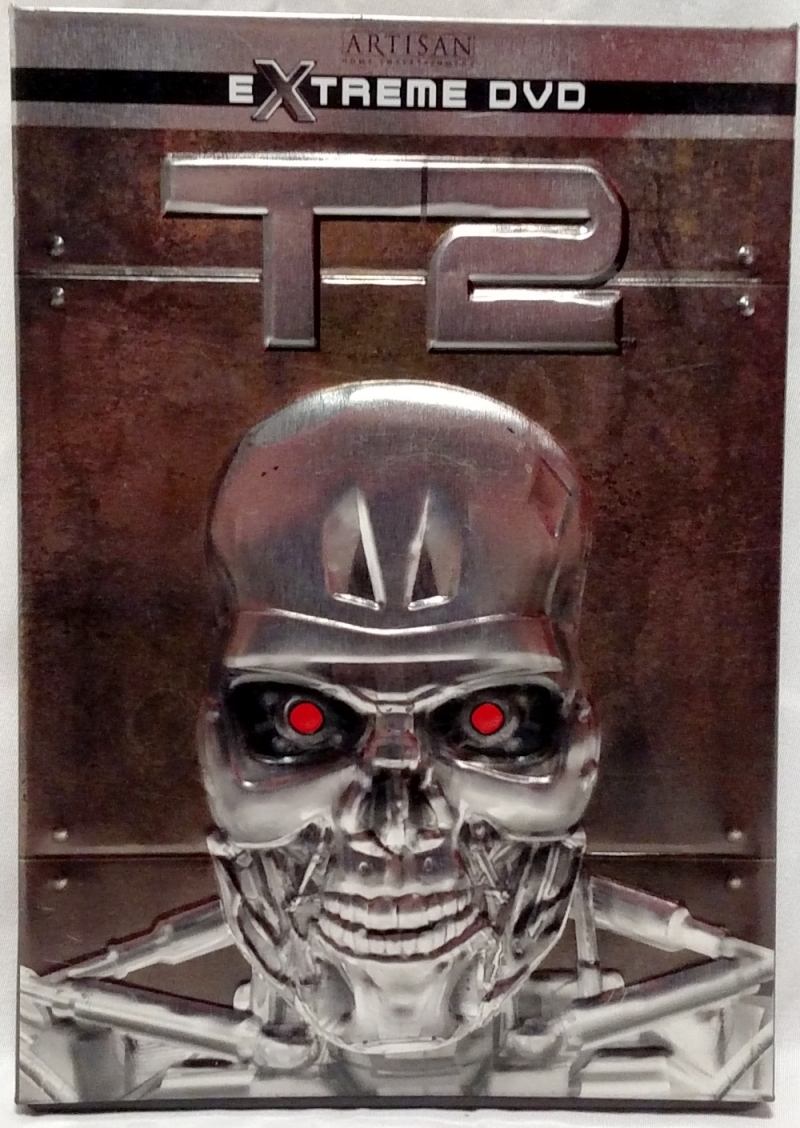 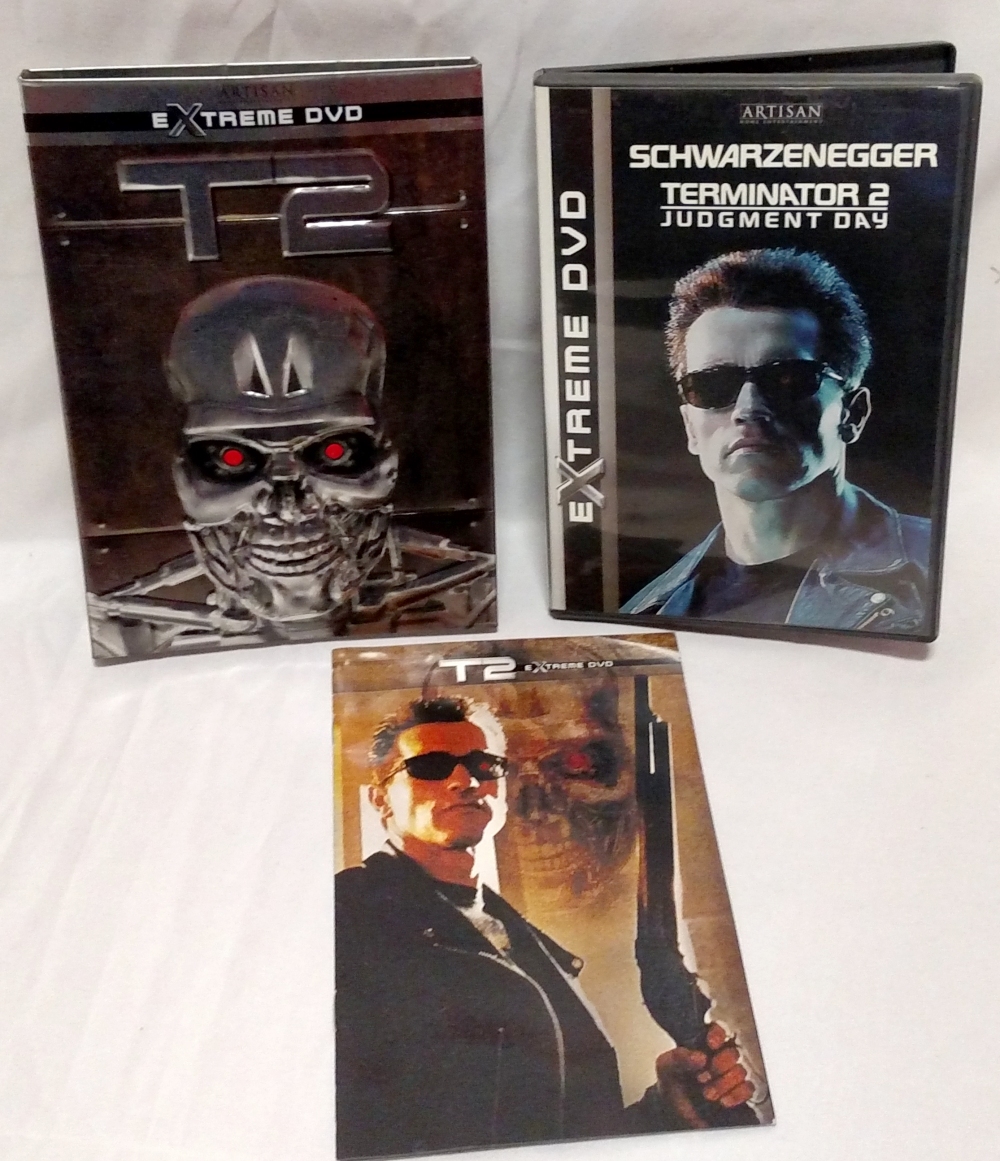 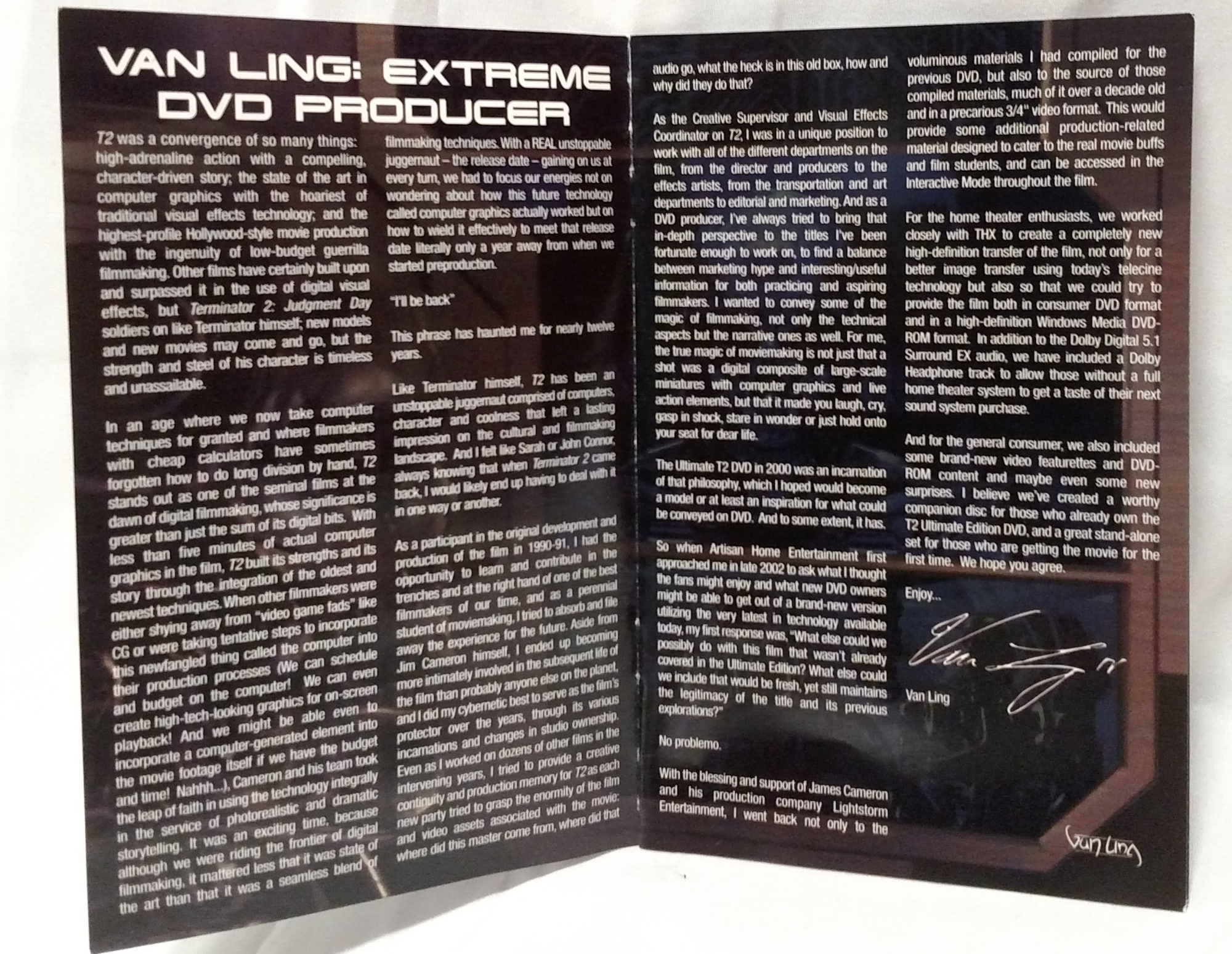 Finally, I’ll wrap this up with a quick look at the SteelBook copies I own for all the movies in the franchise. (Technically, the Salvation case is an IronPack.) The discs are: 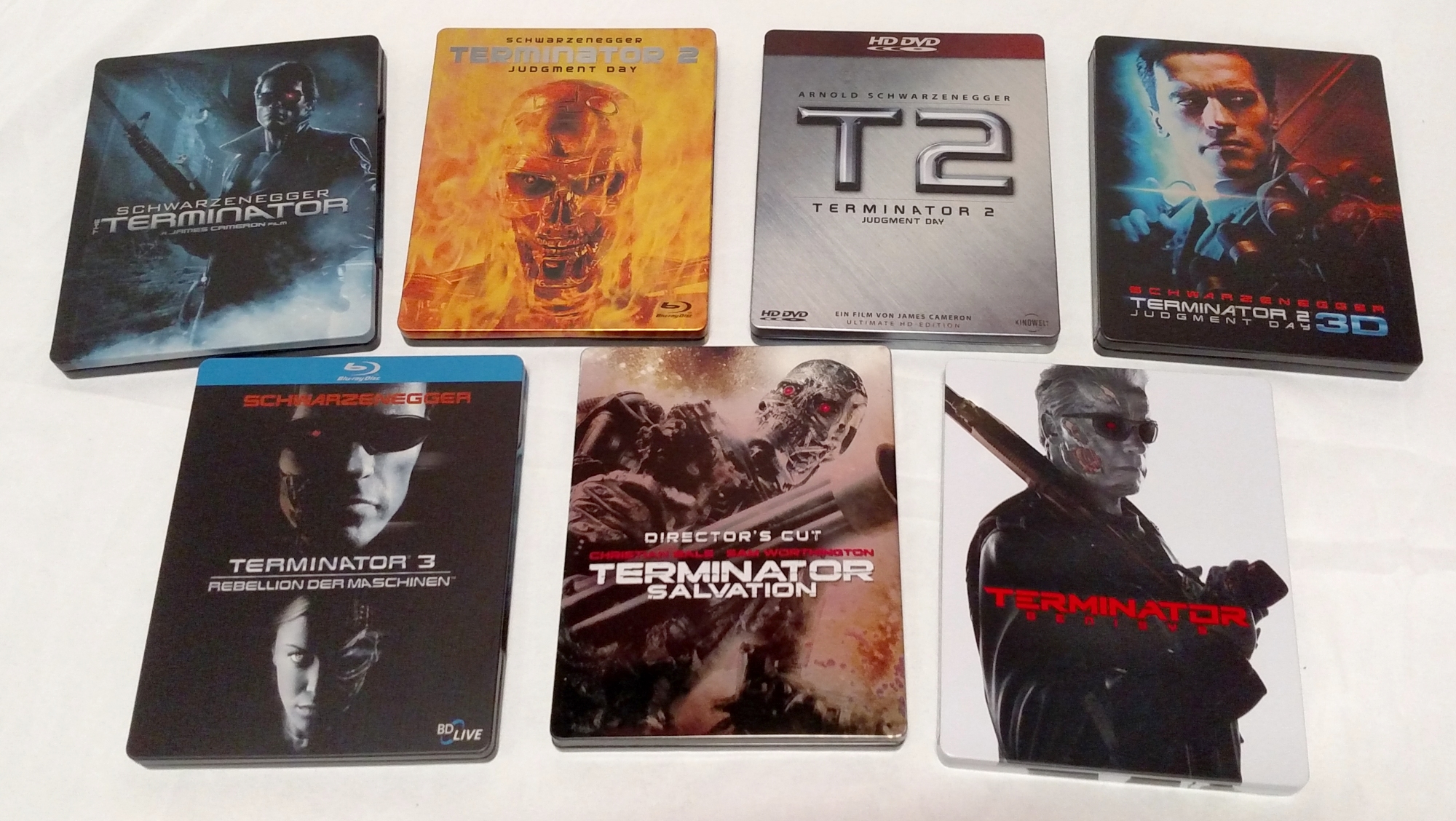 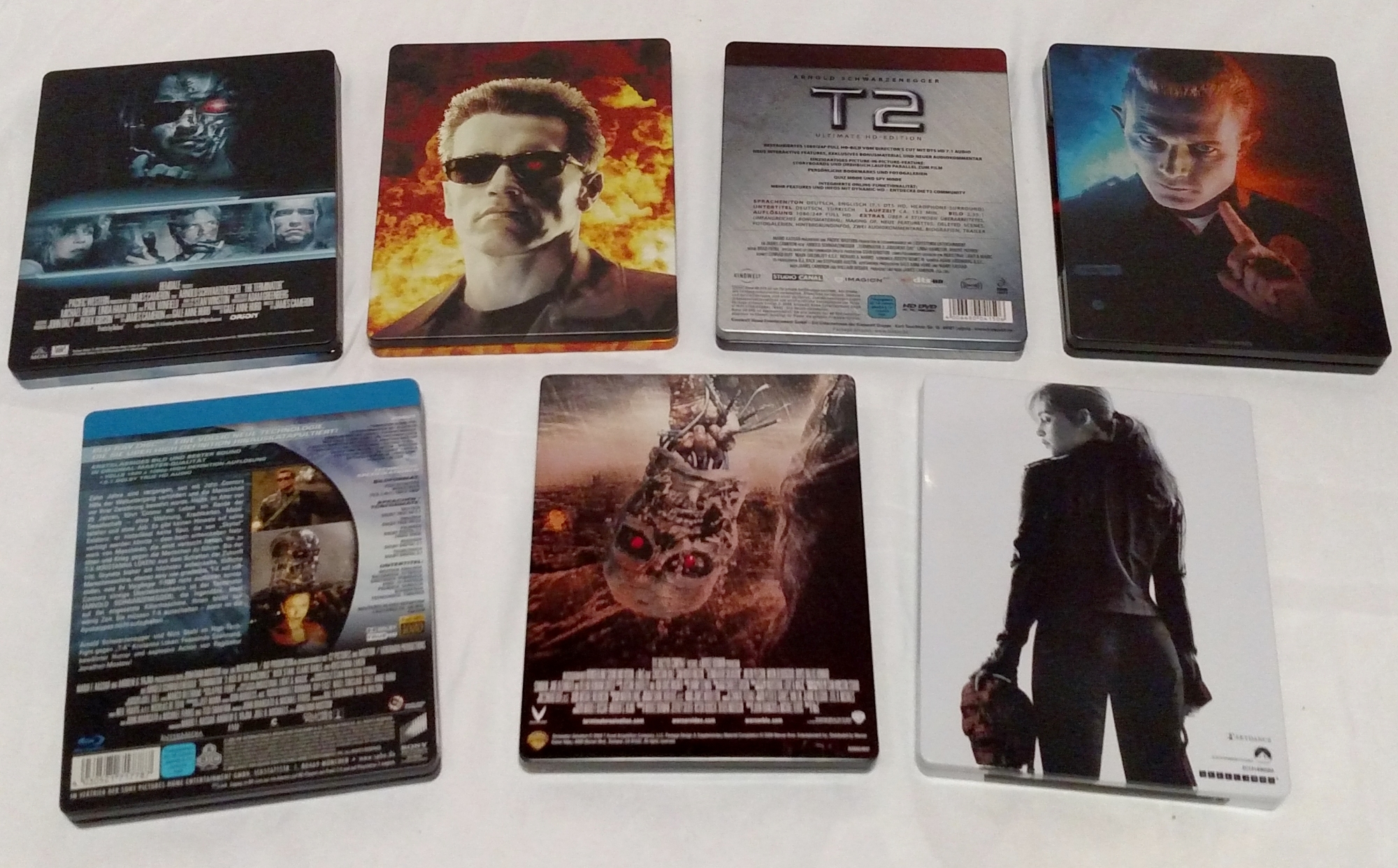