The Warner Archive released Kenneth Johnson’s legendary 1983 alien invasion TV miniseries V on Blu-ray this week. I have no doubt that disc will look much better than any previous home video copy. However, the simple Blu-ray keepcase definitely doesn’t hold a candle to the Laserdisc packages released back in the day.

In the United States, Warner Bros. didn’t release V on Laserdisc until very late in that format’s life, in June of 1999. If not the very last Laserdiscs that Warner put out, they were pretty close. At that time, both the original 1983 miniseries and its 1984 sequel V: The Final Battle received Laserdisc editions simultaneously in separate packages, priced at $49.98 and $79.98 respectively. Neither had any bonus features. As both a V fanatic and a Laserdisc collector, I eagerly purchased both.

Notably, this was the last time either program would be presented in the original 4:3 broadcast aspect ratio. Subsequent DVD editions released in the early 2000s were transferred in a modified 16:9 ratio that added a little extra picture to the sides of the image while cropping some from the top and bottom. The new Blu-ray of The Original Miniseries follows suit. Creator Kenneth Johnson claims that the first miniseries was photographed with widescreen in mind. However, Johnson had no involvement with The Final Battle and I’ve never heard anyone from that production verify their intent one way or the other.

Neither American Laserdisc had particularly fancy packaging. The two-part Original Miniseries was spread across the four sides of two discs in CLV format, all stored in a simple LD jacket that’s not even a gatefold. 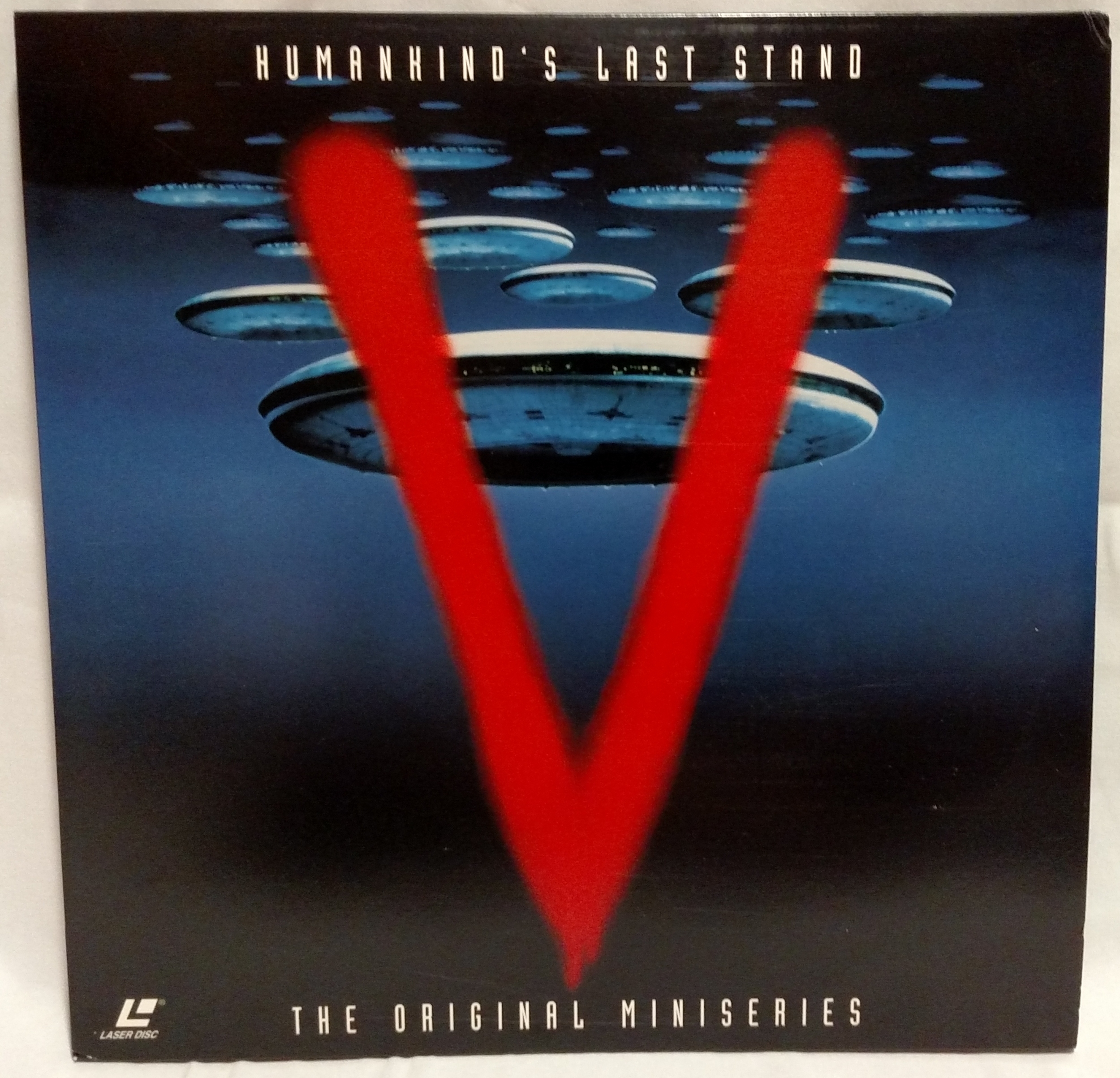 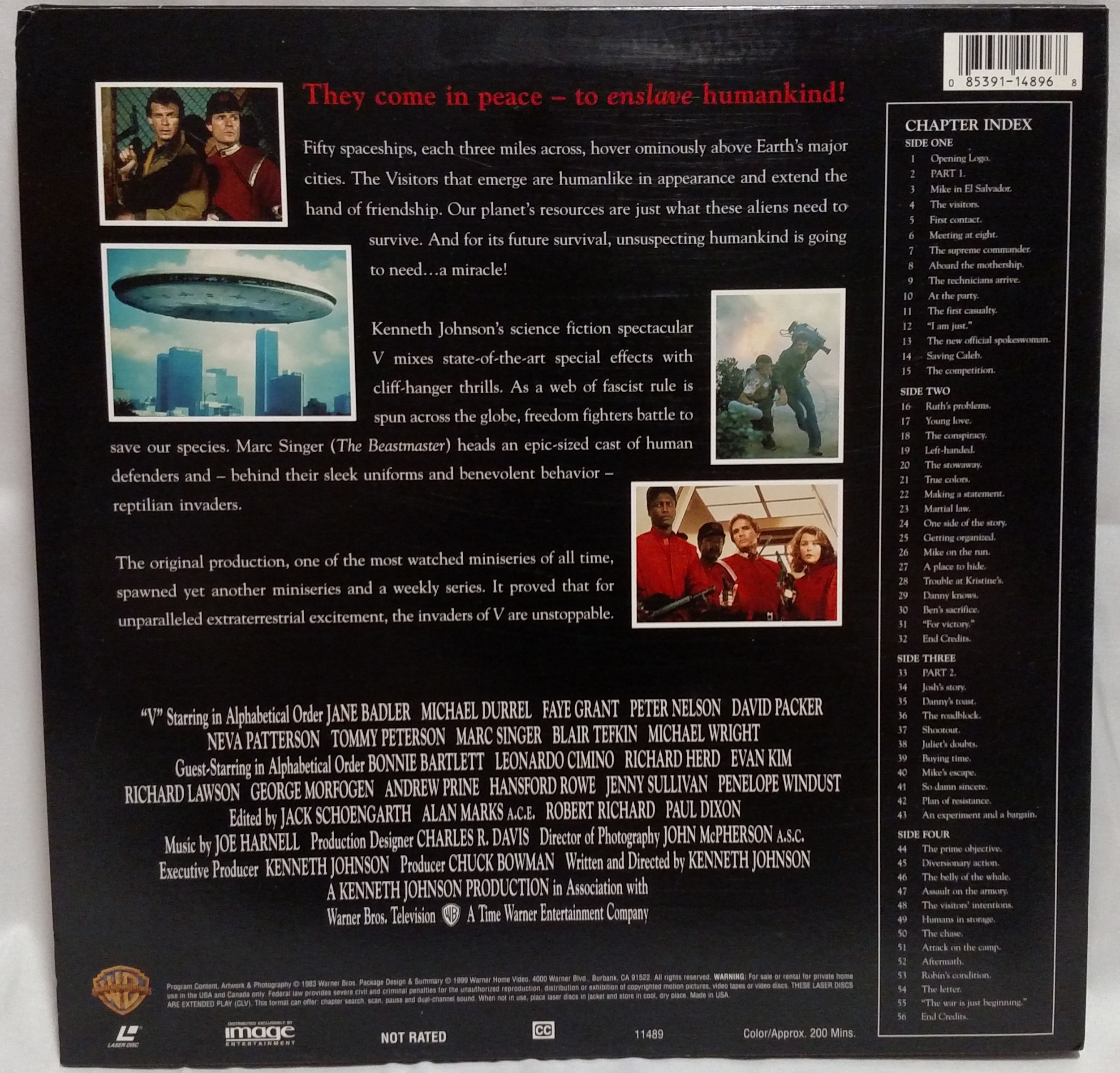 The three-part Final Battle required three discs that were stored in a simple box. The artwork on this one is very basic and there’s nothing special about the interior contents. 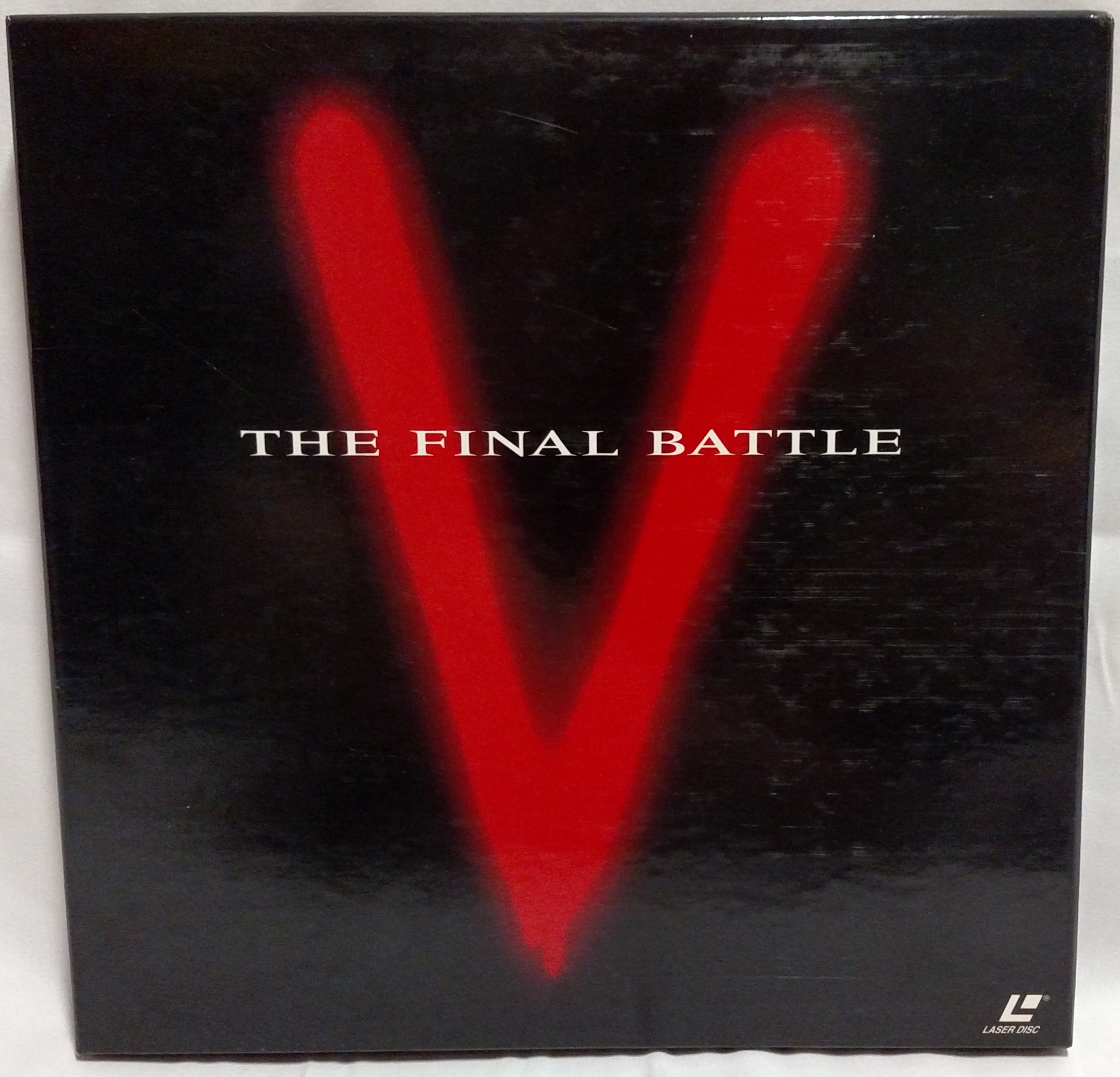 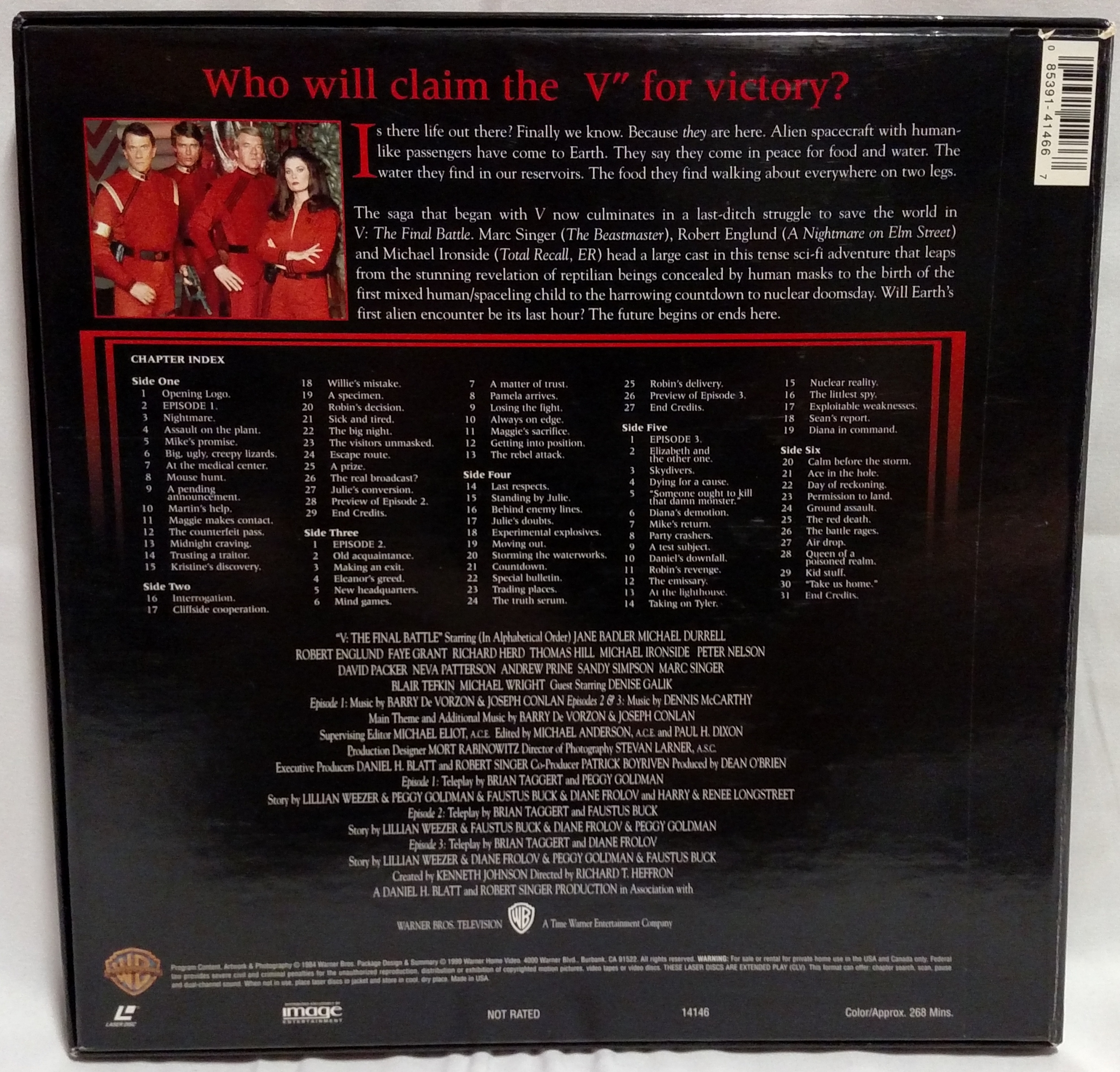 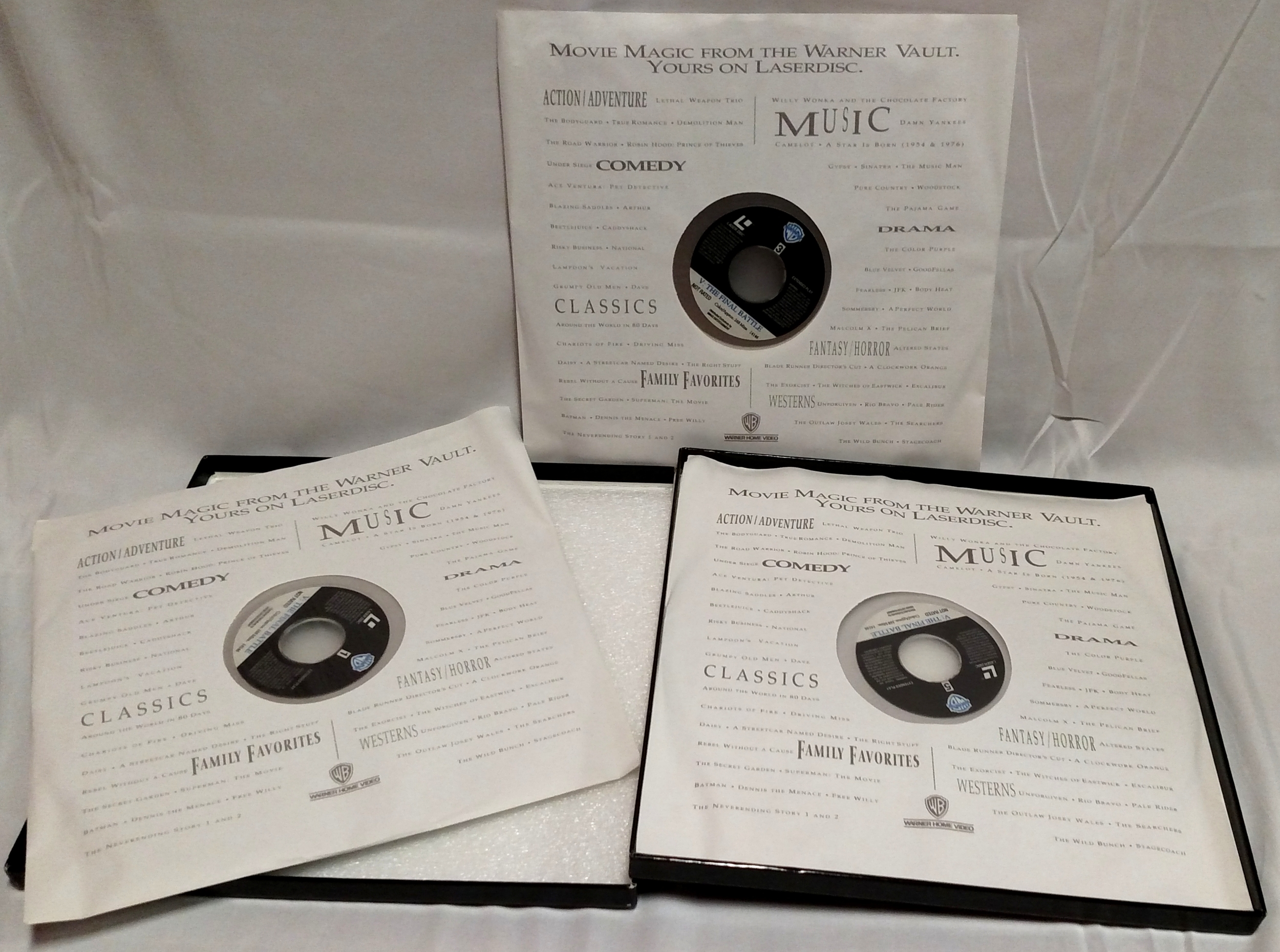 Still, the shows themselves were the important thing, and this was enough to satisfy fans like myself.

V was just as much a phenomenon in Japan as it had been in the United States. Because the Laserdisc market was stronger in that country, Warner Home Video had released a couple of elaborate V packages on LD much earlier there, in 1988 and 1989.

The first, simply called V, actually contained both the original miniseries and The Final Battle in a five-disc box. To be honest, the front cover artwork is kind of a lazy mess that just splays a handful of promotional poster designs in boxes around the central logo. 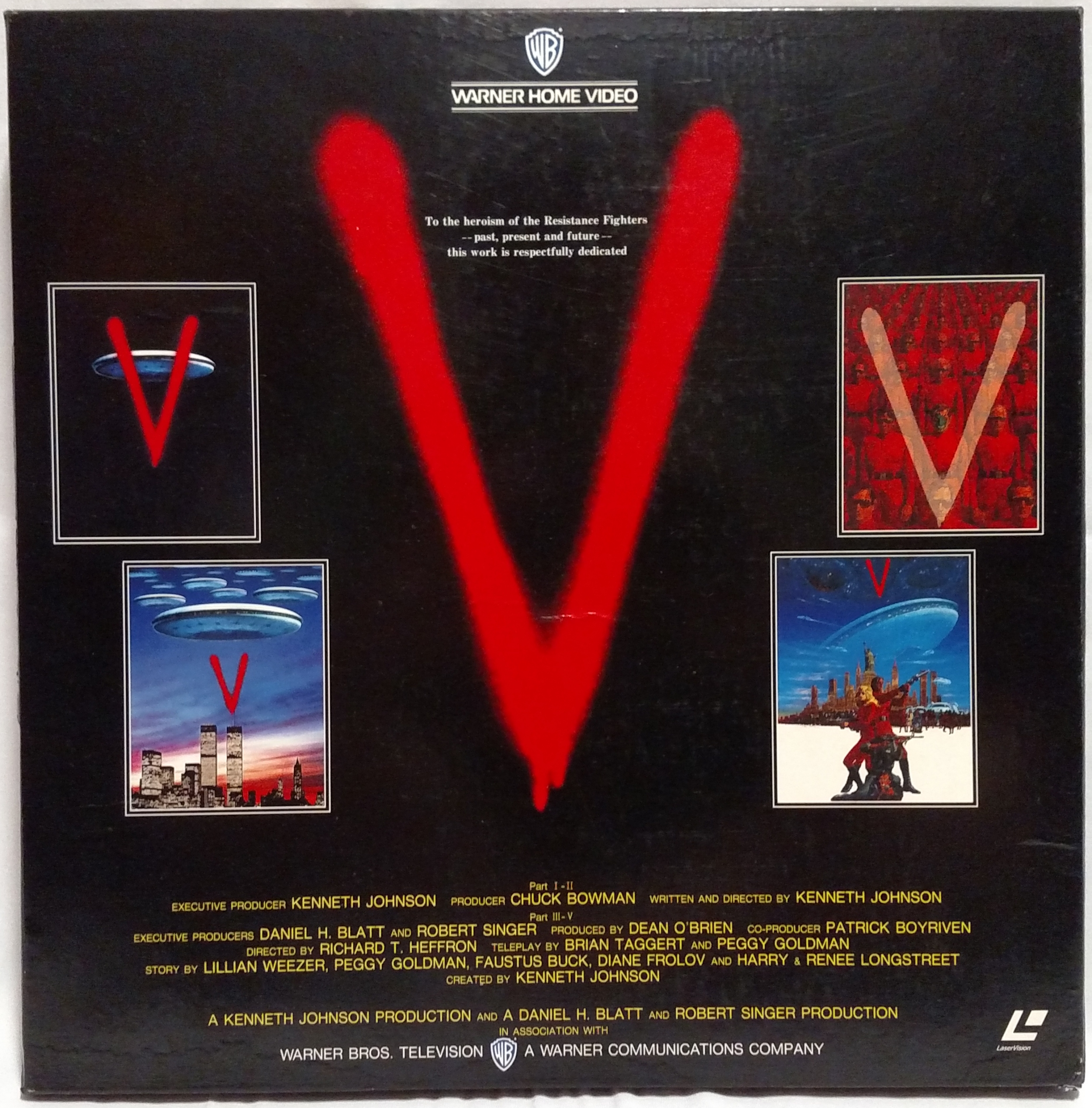 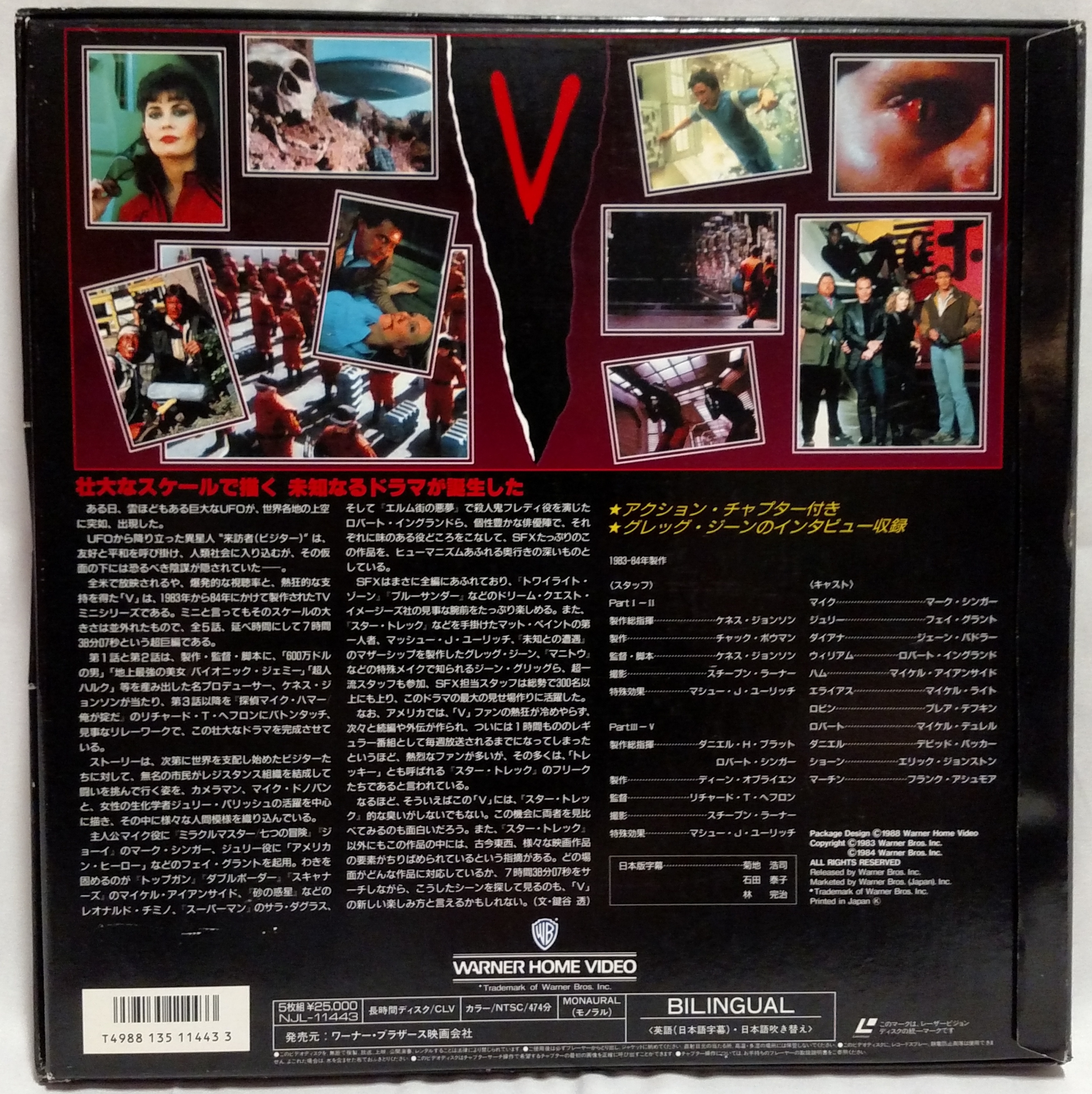 What’s more interesting is that all of the discs inside received custom paper sleeves printed with larger versions of those individual poster designs. This was very rare on Laserdisc. 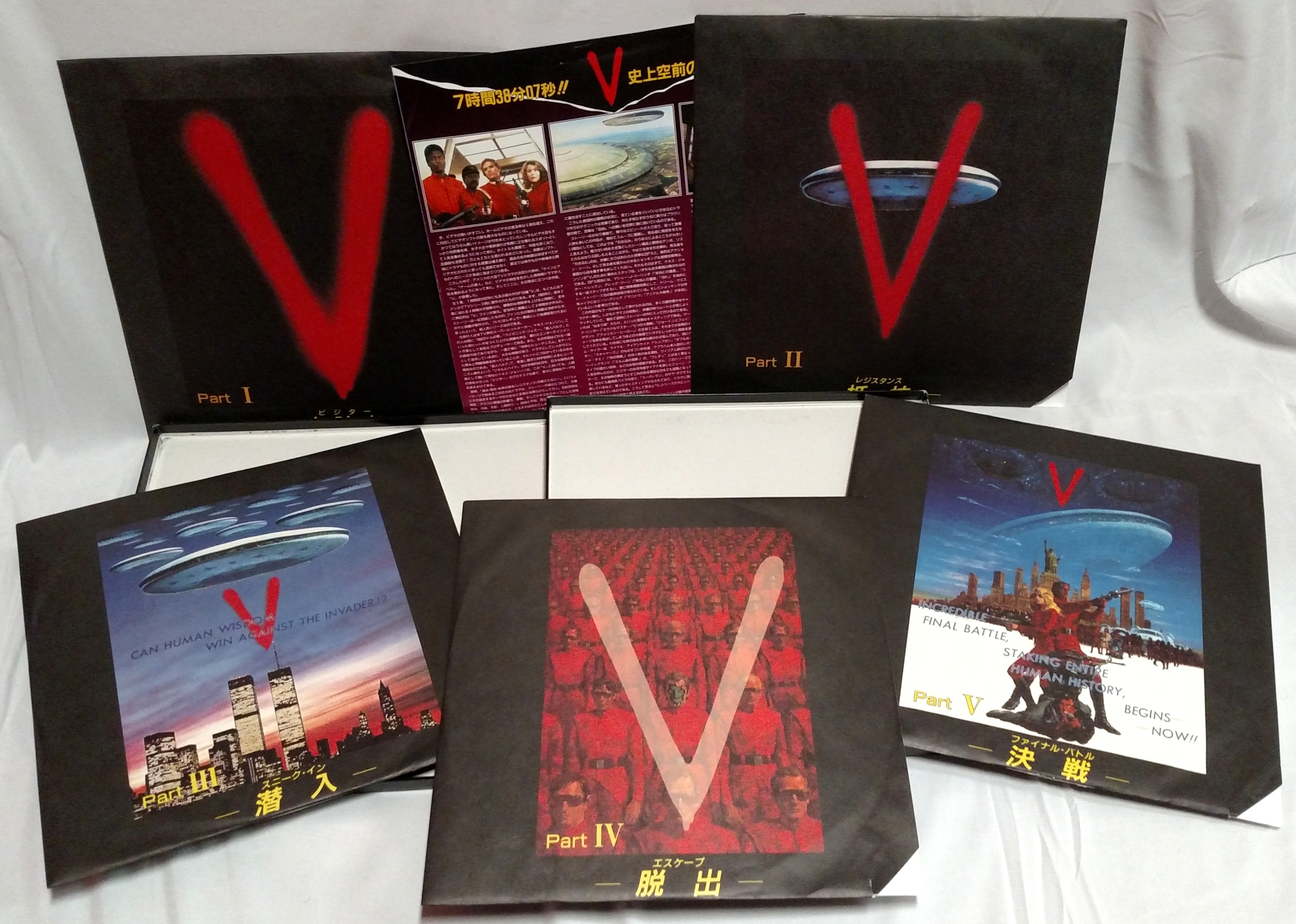 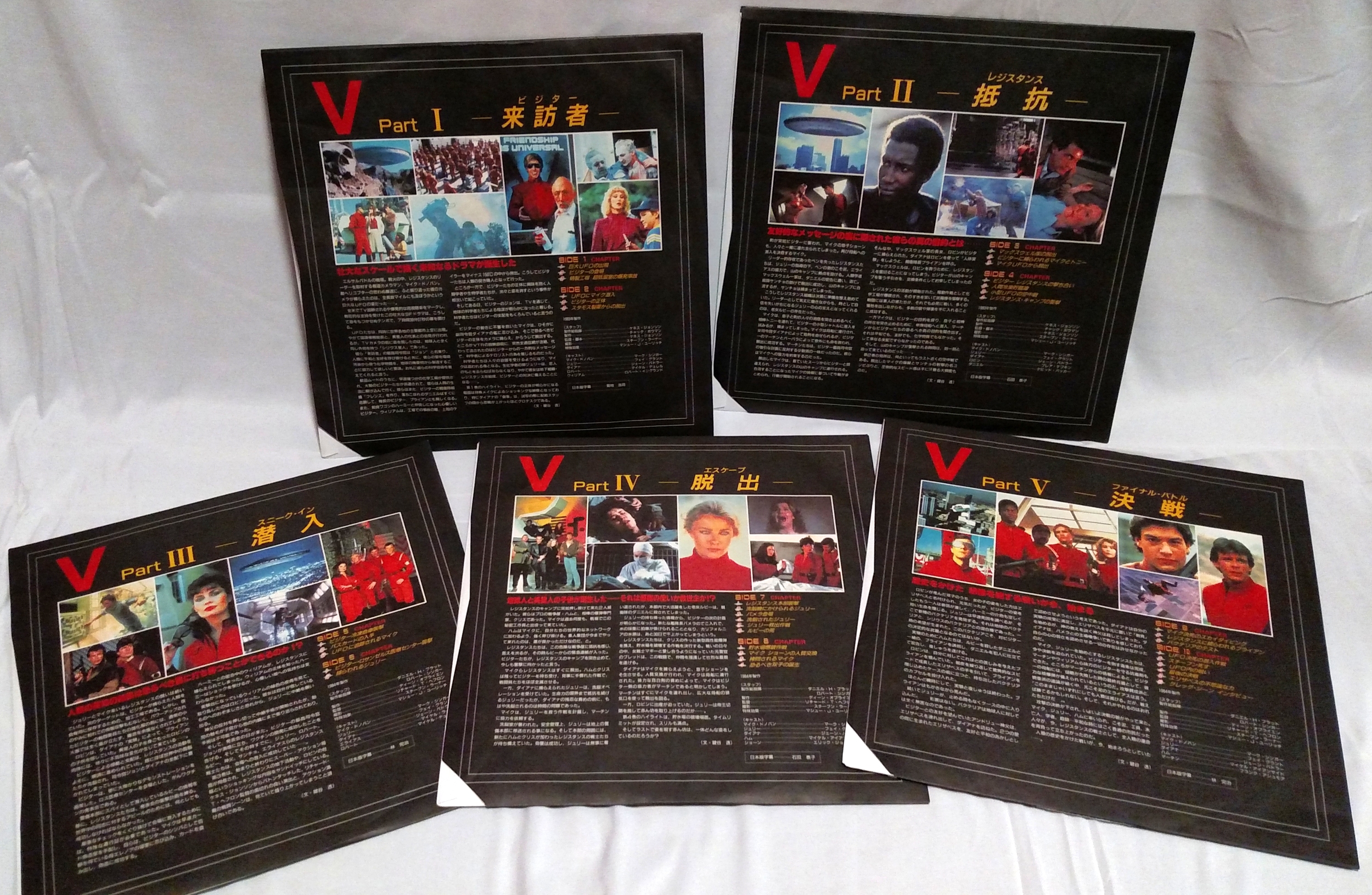 The set also had a booklet that charted out character relationships in the two miniseries.

The final disc has a 15-minute English language making-of featurette about the special effects, which may not be substantive but is a lot more than the later American LD release got.

The picture quality on these discs is not great, unfortunately. 1988 was a rather primitive time for video transfer technology. Additionally, both programs have large Japanese subtitles burned into the image, and at least the first miniseries has been cut or censored. Right off the bat, I noticed that the opening scene is missing several minutes of footage. It’s possible that this was an edited-down syndication version of the episodes rather than censorship, but it’s disappointing regardless. The set can really only be recommended for hardcore V enthusiasts.

The two miniseries were so popular that NBC rushed a spinoff series into production to air in the fall of 1984, just five months after The Final Battle. I guess that battle wasn’t so final after all. With a painfully low budget, cheesy production values, and bad writing, the weekly series was nowhere near as successful as its predecessors. It ran for only one season before being canceled without resolution for its cliffhanger ending.

V mania was still strong enough in Japan that Warner Bros. released that show onto Laserdisc as well, in an enormous box set given the odd title V2. Because the LD format was only capable of holding one hour of video per disc side, the 19 episodes were spread across ten discs. The final disc side contained a 20-minute press conference interview (in English) with star Jane Badler, who played evil lizard diva Diana.

The packaging for this set is more attractive on all fronts. Each of the discs inside comes in its own cardboard jacket. 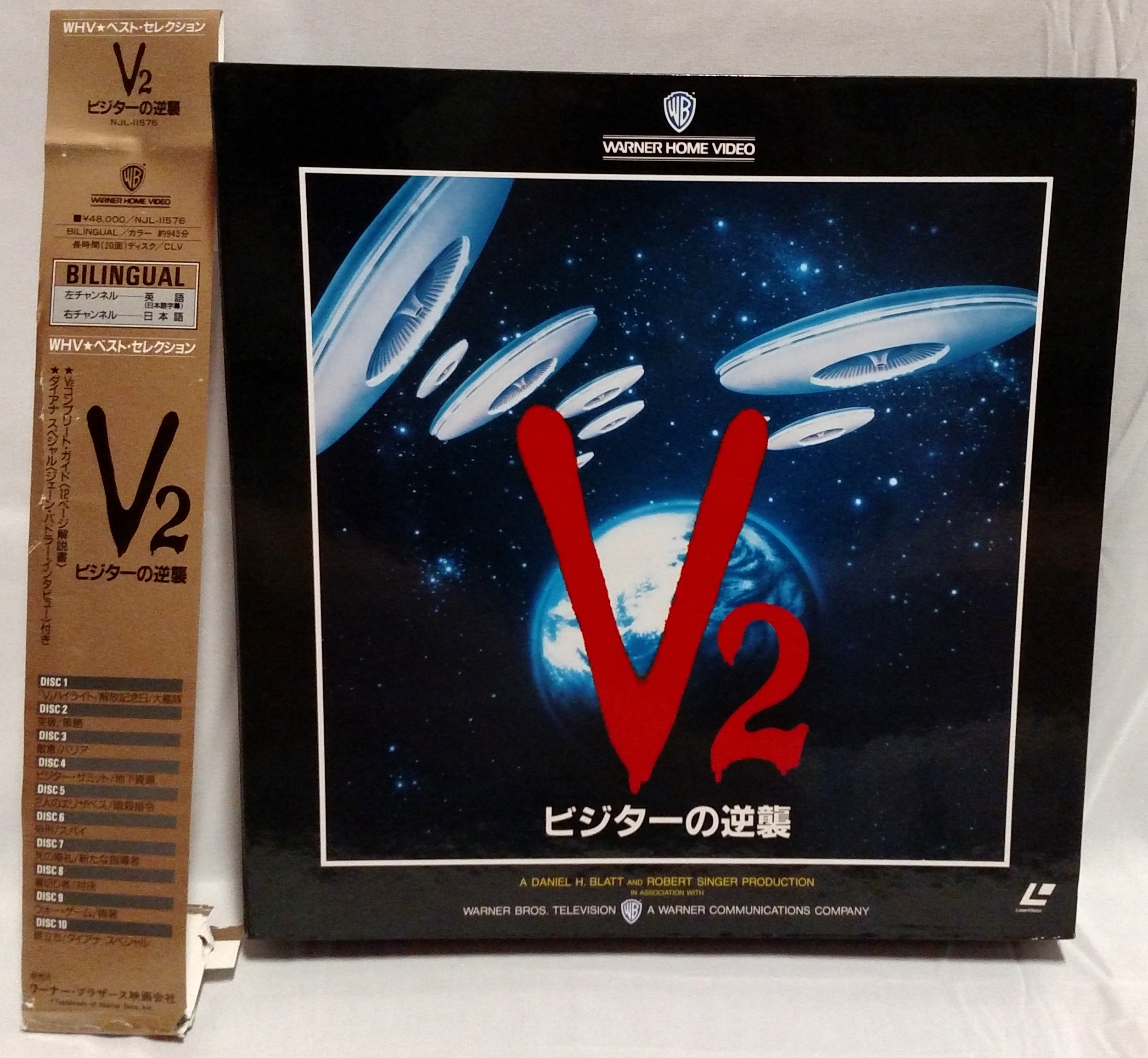 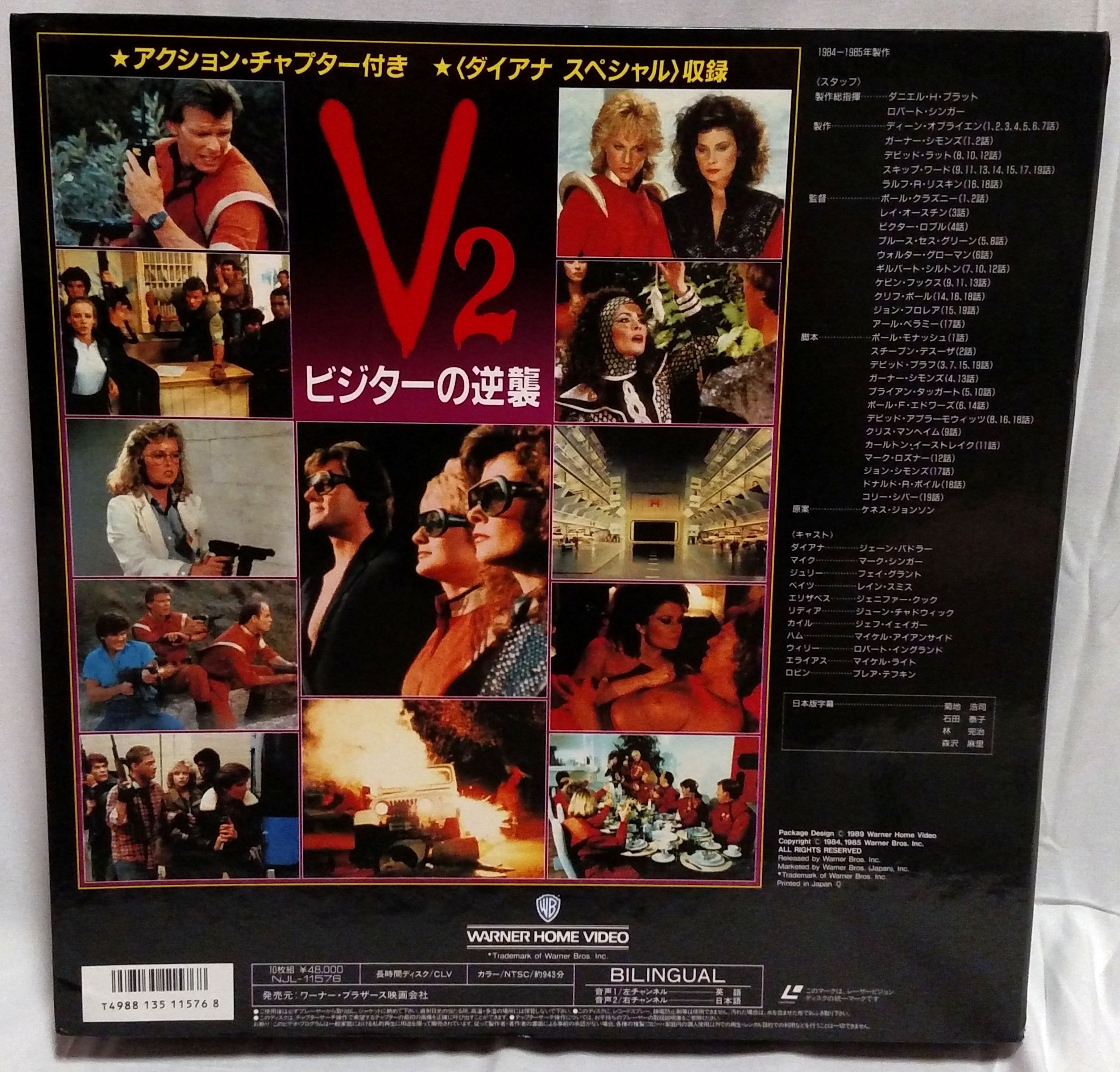 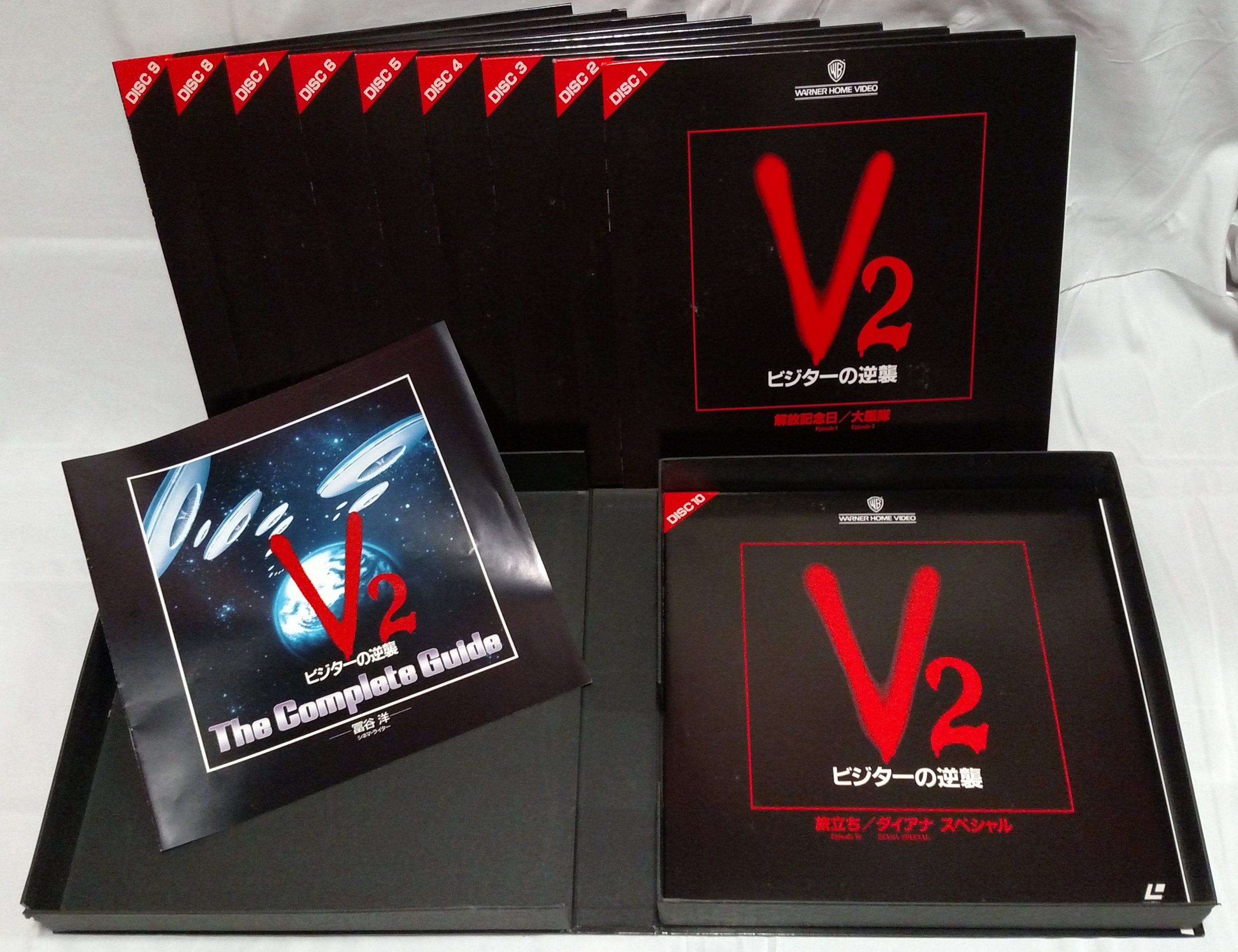 A glossy ten-page booklet includes an episode guide, cast bios, production notes, and a text interview with Jane Badler. All are in Japanese, of course.

All my caveats about picture quality on the previous Japanese release apply to this one as well. I’m not aware of any editing, but can’t say for certain whether all of the episodes are uncut.

Warner Bros. eventually released V: The Series on DVD in the United States in 2004. The smaller box for that was much more compact and efficient, but not nearly as impressive on a shelf.