As we last left our discussion about building a pair of D-I-Y 18″ subwoofers, I finished assembling most of the enclosure. All that was left was to make a few more additions to the interior of the box and prepare the cabling before finishing with the front baffle, which we want to leave for last. First, let’s discuss cables.

There are a few ways to drive the sub from an external power amp, which in my case is the Behringer EuroPower EP4000, but I’ll quickly go through a couple options and the route I finally decided on.

Looking at the back of the amp, we see a variety of options to connect from the receiver and to the individual subs. As you may already know, A/V receivers come with standard RCA inputs and outputs. However, the amp doesn’t have those. Instead, it has ¼” (6.5mm) jacks. Fortunately, there are ways around this. If you happen to have a pair of subwoofer cables available, you can purchase adapters to either fit the jack plug or preferably the XLR connectors (for which there are also some inexpensive adapters). Since I didn’t have cables ready to use, I found that my best solution was a pair of XLR male to RCA male cables from Monoprice, which I use to create a direct connection from the receiver to the amp. 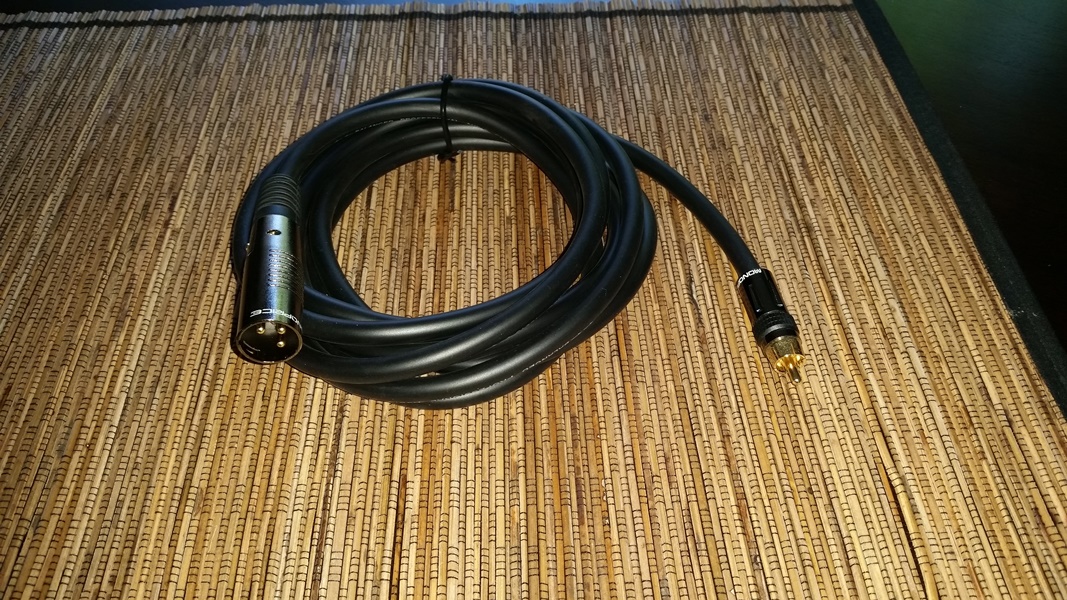 Next are the cables to the individual subs. As you can see on the back of the amp, there’s an option of using speaker wires, which isn’t necessarily a bad thing. But most builders tend to agree that a speakon connection is preferred. Some even claim that it improves the audio by eliminating interference. With that in mind, I purchased a pair of 12AWG speakon cables from Monoprice of two different lengths, because I knew that one sub will be closer to the amp than the other. The only thing left was to figure out how to connect one end of the cable to the subs. Again, we have a couple of solutions. 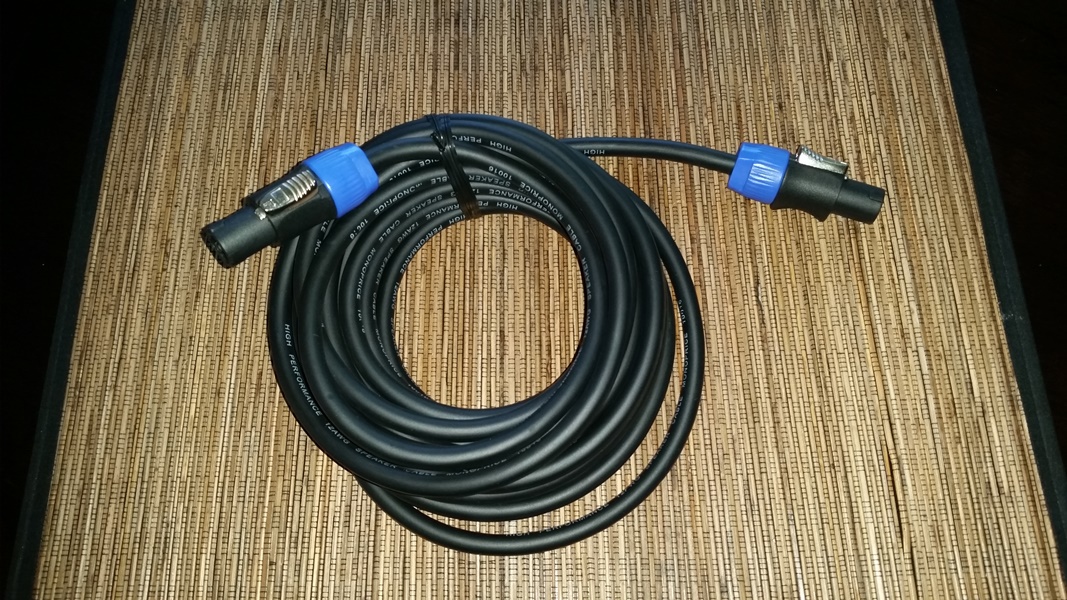 The first option – and the one also preferred by most builders – is a speakon panel mount connector. However, as one can quickly see from the picture in the link, the mount requires that the hole be an absolutely perfect fit. Sadly, my woodcutting skills are not nearly good enough to guarantee that I’ll do it correctly. On the other hand, my drilling skills are off the charts, so I decided to buy a pair of gold-plated binding posts, requiring that I drill two ¼” (6.35mm) holes in the back of each sub and lightly tap the posts – with a rubber mallet so as not to damage them – for an airtight fit. In the end, it looks something like this: 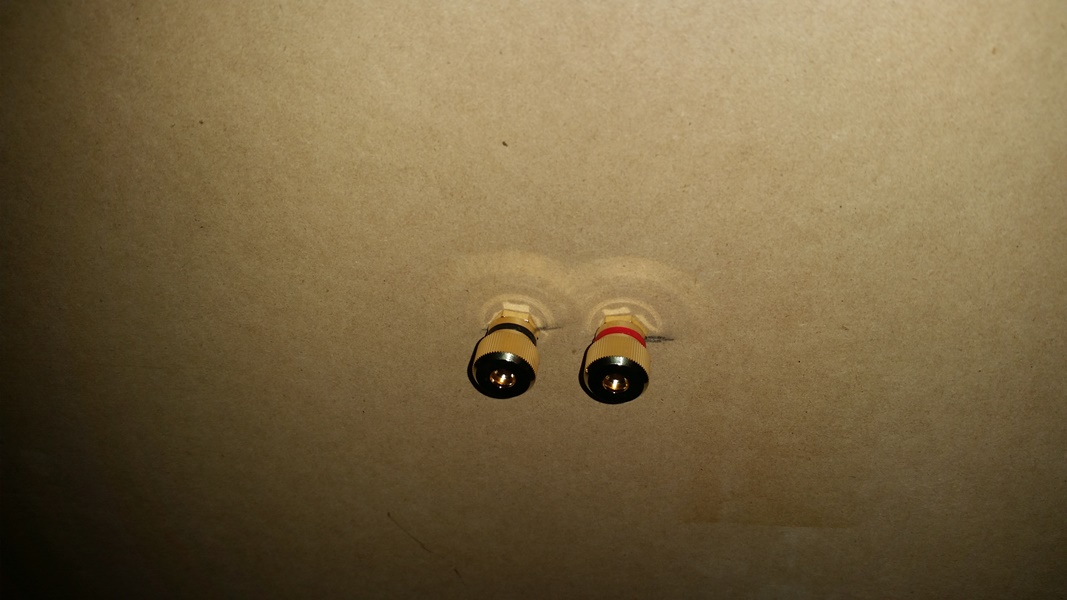 Once nice and snug in place, I connected regular speaker wire, of which I have plenty extra, to the other end of the binding posts inside the box, making sure to remember which are connected to the red and black. Going with the binding post option also allows me the opportunity to use some banana plugs that I’ve had sitting around for the last couple years unused. Like any other speaker wire, I simply attach them to one end of the speakon cables while the other end connects with the amp. Of course, there is the question of how exactly to do this. Thankfully, it’s much simpler than it looks. The black and blue connectors of the cable actually twist off, exposing a pair of smaller red and black wires attached to the line connector. If you look at the pictures below, you’ll see that the wires are held in place by a couple of screws. Simply unscrew them to release each wire, and voilà!, they’re ready for banana plugs.

With the wiring now complete, it’s time to work on the interior of the enclosure so that it doesn’t sound hollow or create a massive thump when listening to the latest action-packed blockbuster. To make our subwoofer sound its best, we must fill the box with material to give the air pumped by the driver some resistance, which makes the sub seem larger and louder than it really is. For this, we’ll need one can of spray adhesive, cheap egg-crate foam pads, large bags or boxes of Poly-fil (polyester fiber fill), and thin netting for keeping the fiber fill off the driver. I had to buy two big 3lb bags (1.4kg) of Poly-fil. All these items can be purchased in any craft/fabric store or your local Walmart.

First, you’ll need to cut the foam pads into strips that will snuggly line the inside walls of the enclosure, then spray the back of each strip with the adhesive. While that’s drying, you can work on the front baffle and prepare to attach it by drilling the necessary holes to then fasten your driver. The best way of doing this so that you know the driver will fit tightly is to use some hex-flanged threaded inserts. One small bag comes with more than plenty.

Before doing any drilling, you’ll need to mark where each hole will go by placing the driver upside down atop the baffle. Then use a 9/32″ (7mm) drill bit to make the holes so that the inserts will have a tight grip on the wood. After making each hole, use the drill again to fasten the inserts into place. Afterwards, you’ll be able to attach the driver using 10-32 Phillips flat machine screws in each insert. They don’t have to be any longer than a 1½” (38mm) length. Thus, your front baffle is now ready to attach to the rest of the enclosure and the driver. 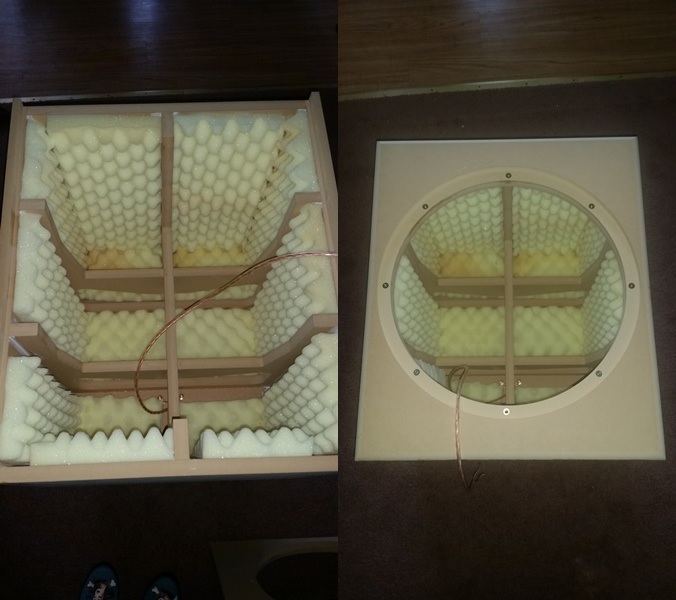 At this point, you can either secure the front baffle in place or wait until after stuffing the enclosure with Poly-fil. Either way works just fine, but it would be easier to dump the entire bag of fiber fill first while the box is on its back rather than through a hole.

After that’s done, attach the thin netting to the back of the front baffle (hence why it’s best to leave the baffle until after the stuffing) with either a staple gun or the spray adhesive. Be careful not to do this where the lips of the baffle and the enclosure meet. Now, apply a healthy amount of wood glue along where the pieces will meet. You may have to tap the sucker into place because it will be an incredibly tight space. Use a rubber mallet or a rolled-up towel and hammer for this. With the enclosure still on its back, you can finally fasten the driver into place securely with the 10-32 flat screws. Because you went that extra step to first drill the threaded inserts, the entire process is much easier than it initially seemed.

In the end, you should have something that looks like this: 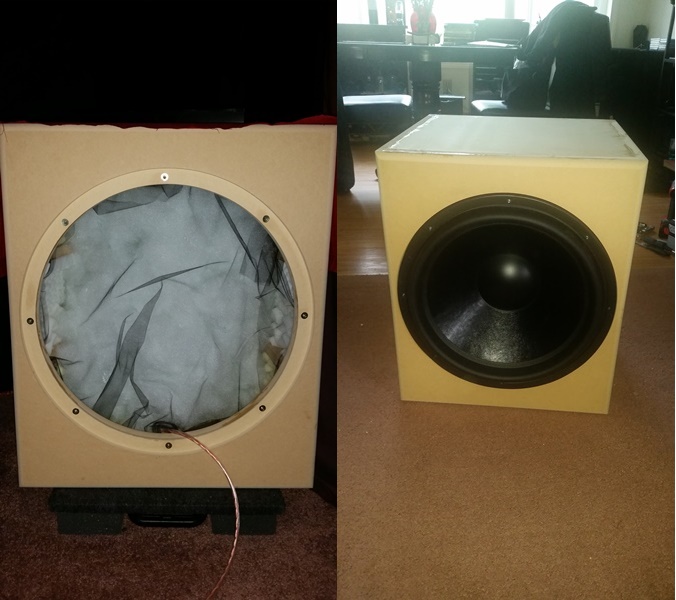 Although my project is not 100% complete, I’ve been playing and listening to the subs extensively. So far, they sound absolutely fantastic, filling the entire room with massive amounts of bass and serious oomph. (It was awesome watching ‘Mad Max: Fury Road‘ recently with a pair of 18″ subs.)

Next time, I’ll be back to talk about the process of painting the subs, as well as the fun part of calibrating the pair and taking in-room measurements. I’ll also touch on the benefits of D-I-Y over store-bought subwoofers.