Last month, I wrote about some recent additions to my home theater: a pair of D-I-Y 18″ subwoofers. The focus was mostly on the cost advantage of making these bad boys myself versus purchasing from an internet brand or from a brick-and-mortar retailer. Now let’s take a look at the build itself.

Before starting, and while waiting for the wood and subwoofers to arrive, we require certain equipment, small items that I’ll mention as I go along. This is stuff we need to have ready and available once the real fun begins.

There’s something oddly exciting about seeing a Fed Ex truck park outside one’s home, a feeling I’m sure we’re all familiar with, like seeing an ice-cream truck drive down your neighborhood and running out the door with all the pocket change you can muster. As an adult, of course, we try to show some restraint, holding back a Grinch-like smile while our hands form a tent and our fingers lightly tap against each other. As the delivery guy plopped two massive boxes on my porch, the thrill was quite apparent, I’m sure.

Anyhow, soon as he left, I dragged the incredibly heavy boxes into the house and immediately opened them like Christmas gifts. Naturally, the first thing I did was to place one of them on my table and took pictures of it with a Blu-ray case next to it, just to give an idea of the comparable size. Let us gaze upon the behemoth size of these beauties for a moment.

Well, after a day of admiring these shiny new drivers, the boxes showed at my doorstep the following morning. I immediately opened those suckers with the same level of eagerness. The pre-cut wood material arrived tightly packed in sturdy, foam-filled packages. Each piece was 3/4″ thick MDF board with a double thick front baffle and rabbet joints on the inside of the largest pieces, making their assembly nearly foolproof. After applying a healthy dose of Titebond II wood glue along the side, top and bottom of each panel, I held them together to dry overnight using eight trigger clamps, each measuring at least 36″ (91cm) since we’re working with a box that measures just under two feet (61cm).

I did the same to the front baffle, which came in two separate pieces, except I used 24″ clamps. The only trick to doing this part was making sure that the edges matched and were even while taking into consideration how it would fit and in which in direction with the rest of the box. 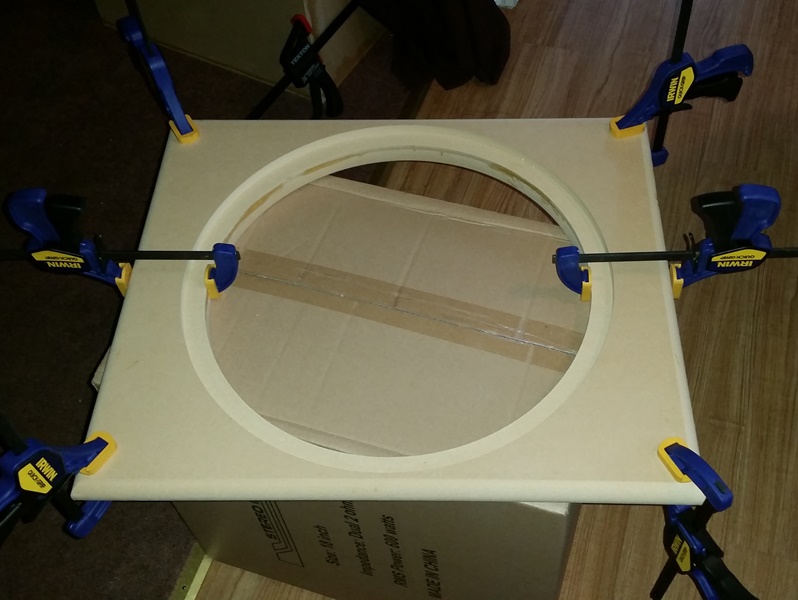 The next day, after removing the trigger clamps, I had to make sure that I had an airtight, sealed box. If everything is done correctly and the joints fit tightly, there really shouldn’t be a need to do the following step. However, doing this doesn’t hurt either for those who want to be certain you have a perfectly strong enclosure. What I’m referring to is sealing the inside of the box using acrylic water-based caulk, which would ensure that there aren’t any tiny cracks or minuscule spaces from which air can escape. The reason for wanting a sealed subwoofer as opposed to a ported one is that the bass ultimately feels tighter, more responsive and less “boomy,” which is essential when listening to music. Again, caulk is not necessary, particularly when the same wood glue can be just as effective, but it won’t do the box any harm either.

It may not look pretty, but since it’s all on the inside, what does it matter what it looks like anyway? 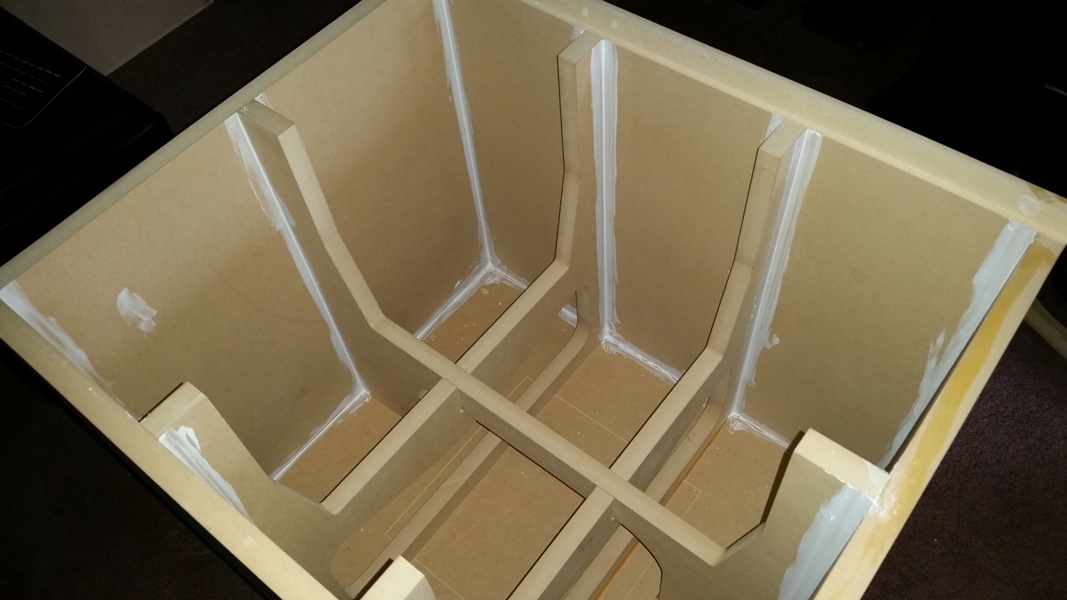 Next time, we’ll drill some holes for the driver and look at the cabling, especially at the different choices available. Then we’ll line/dampen the interior with dense, egg-crate foam, as well as stuffing it with polyfill material. That will then be followed by painting, calibration and in-room measurements.

What I haven’t talked about so far are the sound benefits – what I gain in decibels and hertz as opposed to a ready-made product, especially something store bought. I’ll leave that conversation for a future entry.