Last week I shared my first impressions of the new IMAX Enhanced audio format, available on select A/V receivers and two movie discs to date. Additional testing has answered some of the questions I had, but I’m not sure I like those answers.

Both IMAX and DTS have been stingy with details about exactly what the IMAX Enhanced codec, which is built off the DTS:X format, does or how it differs from DTS:X. After my first round of listening, it didn’t seem to do anything that DTS:X (or Dolby Atmos) doesn’t already do, beyond displaying the word “IMAX” on the receiver’s front panel. By digging around in my receiver’s menu system, I discovered an option in the Surround Parameter menu with the ability to turn the IMAX mode on or off. Turning it off will play the disc’s soundtrack as DTS:X with no IMAX indicator. 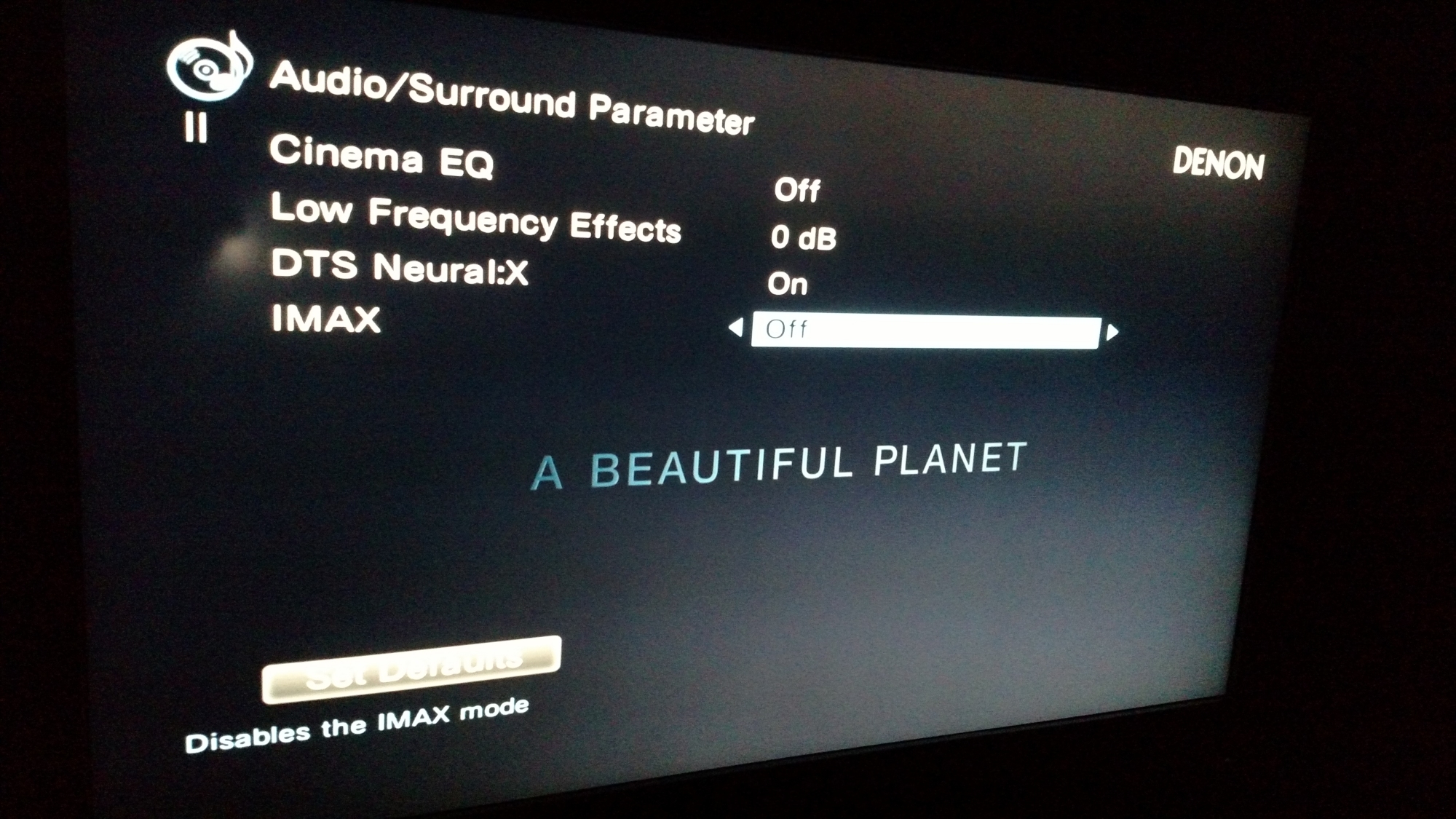 Flipping the setting back and forth allowed me to compare the same movie soundtrack (the majority of my testing was done with the A Beautiful Planet disc) played as both DTS:X or IMAX Enhanced DTS:X. Doing so revealed that, in fact, the IMAX mode does sound and measure different than the normal DTS:X mode. Is different better? That’s a harder question to answer.

All About That Bass

The first thing to understand is that IMAX treats bass differently than normal movie soundtracks. A traditional 5.1 or higher sound mix will use the .1 channel for Low Frequency Effects while retaining a healthy amount of bass in the other channels. During home theater playback, your speaker crossover settings will move some of that bass from the main channels and mix it into the .1 channel so that your subwoofer can reproduce it. An IMAX theatrical mix, on the other hand, doesn’t have an LFE channel. Depending on the theater installation, the soundtrack will either be 5.0, 6.0, or 12.0 with bass high-pass filtered to the subwoofers.

I can’t speak to what previous IMAX titles on home video have done because I’ve never studied them closely, but the first two IMAX Enhanced discs appear to have been pre-filtered up front to send the majority of bass to the .1 channel and keep it out of the other speakers.

To test this, I cued up Chapter 2 of A Beautiful Planet, which begins with a fairly decent, steady bass beat in the Paul McCartney song playing on the soundtrack. With a sound level meter on a tripod in my chair, I replayed the scene a bunch of times. Under normal circumstances, I set an 80 Hz crossover from my front tower speakers to my subwoofer. The speakers should be capable of going down to about 30 Hz on their own, but I prefer to let my subwoofer to the heavy lifting.

For this test, I went into my receiver’s menus and set Front Speakers to Large, with Subwoofer as Yes. I then unplugged the subwoofer. On a normal soundtrack, the “Large” front speakers should play back all of the bass except specific Low Frequency Effects. In this case, however, the majority of bass immediately vanished when I unplugged the subwoofer. This suggests that the soundtrack was encoded up front to remove most bass from the main channels and put it into the .1 channel instead. This happened regardless of whether I played back the track as DTS:X or IMAX Enhanced.

Normal listeners would probably never notice this, because they probably already have crossovers set in their receivers and wouldn’t have any need to unplug their subwoofers.

With the subwoofer still unplugged, I next did a bunch of tests playing the audio as DTS:X, with IMAX mode turned off. First, I set the receiver to this:

The result was much the same. No bass. It’s all going to that unplugged subwoofer. Then I changed to:

In this combination, most of the bass comes back, because the AVR redirects it from the .1 channel to the mains. This is logical. So far, so good.

The AVR does not allow an option of Front = Small, Subwoofer = No. Turning off the sub automatically changes Front to Large, which makes sense. If there’s no subwoofer, the front speakers have to do most of the bass reproduction no matter what size they are.

Where Things Get Weird

For the next round, I turned IMAX mode on and things got kind of crazy.

Same result as before. Very little bass. OK, but…

This is barely any better, only a tiny improvement in bass. I’m perplexed. All the bass should be going into my front speakers now. Where did it go?

To reassure myself that I wasn’t imagining this, I turned IMAX mode off. The bass came right back. With IMAX on, however, no bass. I’m at a loss to explain that.

All the bass came back, in force. This gave me the best results with my subwoofer unplugged, which makes zero sense. With this combination of settings, the bass should all be going to my unplugged subwoofer, not to my main speakers. What is happening here? These results defy all logic.

While I was doing these tests, I posted my results to a thread on AVSForum. At the suggestion of another poster, I checked to see whether the IMAX mode overrides the speaker crossovers I’d set in my receiver.

With the subwoofer still unplugged, I set the Front speakers for Small and changed the crossover to its maximum, 250Hz. In theory, this should eliminate almost any bass. However, when IMAX mode was on, I heard no difference at all. There was still, inexplicably, plenty of bass coming from my front speakers. The crossover didn’t seem to do anything.

Switching IMAX mode off produced more sensible results. With a 250 Hz crossover, what little bass there had been practically vanished.

The IMAX mode overrides the receiver’s bass management settings. The audio sounds the same regardless of what the crossover is set to.

What Else Does IMAX Mode Do?

I returned all my speakers to their normal settings and plugged my subwoofer back in, then performed some more back-and-forth comparisons with IMAX mode turned on vs. off.

With IMAX on, the A Beautiful Planet soundtrack is both audibly and measurably louder than with it off at standard DTS:X. Jumping forward in the movie a little, Chapter 4 opens with some Jennifer Lawrence narration, no music or loud sound effects. Her voice measured slightly louder with IMAX mode turned on, but not as much as the bassy music in Chapter 2. This leads me to conclude that IMAX mode adds a bass boost, and perhaps also a small overall volume boost.

Long story short: IMAX mode secretly overrides some of your receiver’s global settings and applies processing to manipulate the audio signal beyond what DTS:X does. Mulling this over, the conclusion I’m coming to is that the IMAX Enhanced mode in the AVR is essentially a DSP feature designed to give the sound more “oomph.” Unlike other DSPs (Church Hall, Rock Stadium, etc.), this one is only accessible specifically to DTS:X soundtracks encoded with IMAX metadata that activates it.

To IMAX or Not to IMAX?

A looming question I’m not able to answer right now is whether the extra bass and other tweaking that the IMAX mode applies were always intended to be part of the movie soundtrack, or if the feature simply cranks up the audio to be more showy?

If we believe that this feature is meant to restore IMAX soundtracks to the way they’re supposed to sound, that implies that the standard DTS:X version is hobbled in comparison. If that’s true, why? Wouldn’t it make more sense to mix the soundtrack with the extra bass and other tweaking up front so that it would sound the same on all equipment, rather than relying on downstream processing?

I just don’t see the need for a special IMAX codec and hardware when it seems like everything they’re doing could have been accomplished at the soundtrack mixing stage and played back through normal DTS:X or Atmos. Except, of course, that if that happened, IMAX wouldn’t have an excuse to license its branding to receiver manufacturers.

On the other hand, if the IMAX mode is really just a DSP that gooses a soundtrack beyond what its mixers originally designed, you’ll have to decide for yourself whether that’s desirable. If you already feel that you have your bass dialed in perfectly, you may not want a feature like this artificially cranking it up. (Personally, I did feel that the bass in these first two movies seemed kind of bloated with IMAX mode turned on.)

With just two titles available at present, it’s hard to know what the intent of all this processing really is. We may not have an answer to that until we get a broader selection of IMAX-encoded content.