Movies about hypnotism always feel a little gimmicky to me. While the manipulation of the human mind certainly can be achieved under the right circumstances and benefit troubled psychiatric patients, its use as a dramatic device often seems contrived. Whirlpool tries its best to treat hypnosis in a serious, clinical manner, but even director Otto Preminger can’t disguise the fact that it’s really nothing more than a titillating plot point that drives a tense, preposterous, but still entertaining film noir.

Back in the late 1940s, Freudian themes began creeping into Hollywood movies, as screenwriters explored the brain’s dark recesses and the disturbing impulses and syndromes that psychological imbalances could produce. Films like Spellbound, The Strange Love of Martha Ivers, and The Snake Pit incisively depict the anguish, confusion, and deep-seeded inner turmoil traumatic events often provoke. Whirlpool aspires to do the same. Kleptomania is its affliction du jour, and in the movie’s opening scene, we witness a department store detective accost Ann Sutton (Gene Tierney), the well-to-do wife of distinguished psychoanalyst Dr. William Sutton (Richard Conte), to accuse her of stealing a $300 mermaid pin.

Just by chance, David Korvo (Jose Ferrer) witnesses the scene. He recognizes Mrs. Sutton and uses his wiles to convince the store manager to dismiss the incident. A self-professed “humble astrologer whose only medical diploma is the gratitude of his patients,” Korvo is also a manipulative hypnotist who preys on wealthy women to support his lavish lifestyle. He instantly recognizes Ann’s kleptomaniac tendencies and correctly surmises that she hides them – and any other insecurities and unhappiness – from her husband so as not to destroy his perception of her as the perfect wife.

Korvo takes advantage of Ann’s frailties and exploits them to his advantage. He hypnotizes her under the guise of treating her insomnia and anxiety, but his true motive is to frame her for the murder of another socialite, Theresa Randolph (Barbara O’Neil), an ex-lover who threatens to expose Korvo’s improprieties if he doesn’t repay the money she has pilfered from her daughter’s trust fund to support him. Korvo first tries to seduce Ann to get the cash he needs from her, but when she resists his advances, he puts her in a trance and instructs her to go to Theresa’s home in a couple of days at an appointed hour. When she dutifully arrives, she discovers Theresa’s dead body, and when the police arrive moments later, they discover some incriminating evidence. Ann is arrested, but when she wakes from her hypnotic state, she can’t remember anything that transpired that evening and believes she’s going crazy. The police pigeonhole the murder as a love triangle gone bad, and even Ann’s devoted husband questions her innocence. Korvo, however, has an airtight alibi, so he can’t be the culprit. Or can he?

The plot of Whirlpool may be engrossing, but it strains credulity at almost every turn. Too many fantastical elements litter screenwriters Ben Hecht and Andrew Solt’s slick adaptation of a novel by Guy Endore. Sophisticated, lyrical dialogue a la Joseph L. Mankiewicz peppers the script and sounds especially urbane when rolling off the tongue of a classy actor like Ferrer. Appearing in only his second motion picture, the dulcet-toned Ferrer – fresh from his Broadway triumph as Cyrano de Bergerac, a role that would win him a Best Actor Oscar in the film version a year later – easily steals the movie with a mesmerizing (pardon the pun) portrayal. We learn very early on that Korvo is a devious villain, and once the cat’s out of the bag, so is Ferrer. With delicious cunning and duplicity, he slithers across the screen with the same suave, erudite demeanor as Clifton Webb’s Waldo Lydecker in Laura. Korvo, however, is infinitely more ruthless and sinister than Lydecker, and Ferrer is a far better actor than Webb. Without him, Whirlpool wouldn’t be half as much fun.

Preminger, of course, directed Laura with Tierney playing the title part in that classic film. Preminger undoubtedly designed Whirlpool to recreate the magic of Laura. He even hired David Raksin, who wrote the prior film’s haunting, iconic theme, to compose the Whirlpool score. Unfortunately, lightning didn’t strike twice. Laura is a razor sharp, dreamily romantic mystery that features a clever surprise twist, while Whirlpool quickly puts its cards on the table and reveals a rather weak hand. It has intrigue, but not much suspense. A lot of superior talent worked on Whirlpool, including acclaimed cinematographer Arthur Miller and costume designer Oleg Cassini (Tierney’s husband at the time), but its glossy look and strong performances can’t mask the movie’s myriad narrative deficiencies.

Tierney would wage a much-publicized and lengthy real-life battle with depression that forced her to take a seven-year hiatus from Hollywood in the mid-1950s, during which she endured more than two dozen grueling, debilitating electroshock treatments. Even in the late 1940s, Tierney struggled with illness. She could likely relate to her Whirlpool role, and the connection shows up on screen. The knowledge of her mental struggles lends her forthright, understated portrayal an ironic poignancy and resonance. Tierney never gets enough credit for her admirable body of work (her breathtaking beauty often overshadows it), but her underrated acting heightens many of the movies in which she appears. Whirlpool is one of them, and while she possibly never looked lovelier than she does here (several of her close-ups are stunning), Tierney, under Preminger’s tutelage, brings plenty of dimension to a reserved, tormented character who must repress her emotions to maintain her sanity.

Other good actors, like Richard Conte (later of The Godfather fame) as Ann’s sympathetic husband and Charles Bickford as a crusty police detective, are wasted in bland parts, but Barbara O’Neil, who’s best remembered as Scarlett O’Hara’s mother in Gone with the Wind, makes a notable impression as the doomed Theresa. Whirlpool also would mark the final film appearance of legendary stage actress Constance Collier, who delivers a few witty lines as a flighty, aged society spinster.

Despite almost all the right ingredients, Whirlpool doesn’t deliver as much turmoil and turbulence as its title promises. Preminger’s assured direction, high-quality production values, and the excellent performances of Tierney and especially Ferrer elevate the material and keep us engaged, but unfortunately, Whirlpool is far from hypnotic.

Twilight Time and 20th Century Fox have collaborated on a number of superior transfers over the years, but sadly, Whirlpool cannot be added to that lofty list. Very little care seems to have been lavished on the 70-year-old film, which often looks quite ragged. The source material for the 1080p/AVC MPEG-4 transfer is littered with nicks, marks, and occasional small blotches, all of which become annoying over time. Some image instability, intermittent stretches of softness, and fluctuations in grain structure also disappoint. When Whirlpool looks good, it looks very good, with strong clarity and contrast, deep black levels, stunning close-ups, and a nicely varied gray scale producing a pleasing picture, but unfortunately the transfer has no consistency.

Tierney looks especially beautiful in this film, thanks largely to Arthur Miller’s lush cinematography, but her striking presence is often dulled by the shabby print. Another irksome element of this presentation is the movie’s aspect ratio. The Twilight Time packaging lists the ratio as 1.33:1, while IMDb states that Whirlpool was shot in the standard 1.37:1 Academy ratio. The difference is minuscule, but it does lead one to question the origin of the source material. The previous DVD of Whirlpool also lists the aspect ratio as 1.33:1, so I wouldn’t be surprised if this Blu-ray release is a recycling of that master.

Two audio options are available: a DTS-HD Master Audio 2.0 mono track and a DTS-HD Master Audio 1.0 mono track. I watched the movie with the 2.0 mono, which sounds rich and full. Excellent fidelity and tonal depth enhance David Raksin’s haunting score. Sonic accents like gunfire and shattering glass are crisp and distinct, and all the dialogue is easy to comprehend. Some faint surface noise is audible during silent pauses and quiet conversations, but it never rises to a concerning level.

Disc supplements include an audio commentary with film historian Richard Schickel (imported from the previous DVD), an isolated music track, and a theatrical trailer, which can be played straight or with the isolated score. The customary Twilight Time eight-page booklet features an essay about the film by Mike Finnegan, several black-and-white scene stills, and a color reproduction of the movie’s poster art. 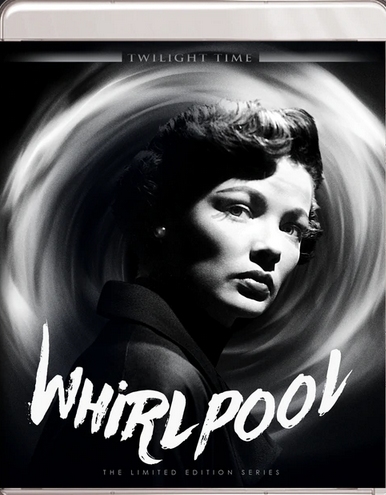