As we last left off on the HTPC discussion, I described the various parts needed to build a sturdy machine. After putting everything together, I must say that I’m very pleased with how my HTPC turned out and how beautiful it looks alongside the rest of my home theater setup. The next step is configuration and installation of the programs needed for video and audio playback, followed by the software that will customize the look of my new media center. This is arguably the best and most fun aspect of the entire process.

As I mentioned before, Assassin’s HTPC blog is an invaluable guide for this. The small price you pay for his step-by-step tutorial is practically nothing compared to the stress and headache you’ll save yourself. He provides pretty much everything you’ll need to know for making your HTPC function at its very best. From configuring BIOS and adding new hard drives, to ripping your movies and recording live TV, those not intimately familiar with computer hardware and software will be greatly indebted to Assassin’s guidance. (Because of the amount of time he clearly put into this, I won’t share any of his secrets. You’ll have to visit his blog.)

The main program used for movie and music playback is Windows Media Center (WMC), which is technically free since it already comes with Windows 7 Home Premium. This works superbly well with another open-source program called Media Browser (MB). There are others available, such as My Movies, Media Portal or MythTV. I also use XBMC on my laptop, just to give me a different window to look at from my dedicated HTPC. It looks pretty cool, but I find navigation a bit awkward, and customization is somewhat limited, which is the same issue with the other programs. I also could have kept things simple by just using WMC as my main player. For me, MB is ultimately the best choice because it’s terrifically user-friendly and allows lots of freedom to customize, which I’ll demonstrate in a bit.

Speaking of players for the PC, there are several options available, from the freebies like VLC and Media Player Classic to PowerDVD and Total Media Extreme. Except for MPC-HC, I really don’t see the need for any such programs on an HTPC – unless, of course, it’s the main Blu-ray/DVD player of the house. It’s a completely personal choice, and my HTPC is really more for storage than disc playback. Meaning, I don’t use it for review purposes. Before I go off on a tangent about a variety of choices, let’s bring back things and focus only on what I did with my machine.

With WMC configured to work with my existing equipment and MB installed, the next part is to develop the overall look of my screen. MB is surprisingly easy to use and comes with a great selection of plug-ins that provide interface themes, cover art, thumbnails and (most importantly) information about each movie and its cast. Some of them are free while others ask for a small donation. I went with a few of the freebies, along with a couple others that I found worth the asking price. For the appearance, I chose the one called “Pearl” and also downloaded an application called “Media Browser Intros,” which allows users to program what to watch, like trailers, prior to the actual movie. It’s a great little tool. 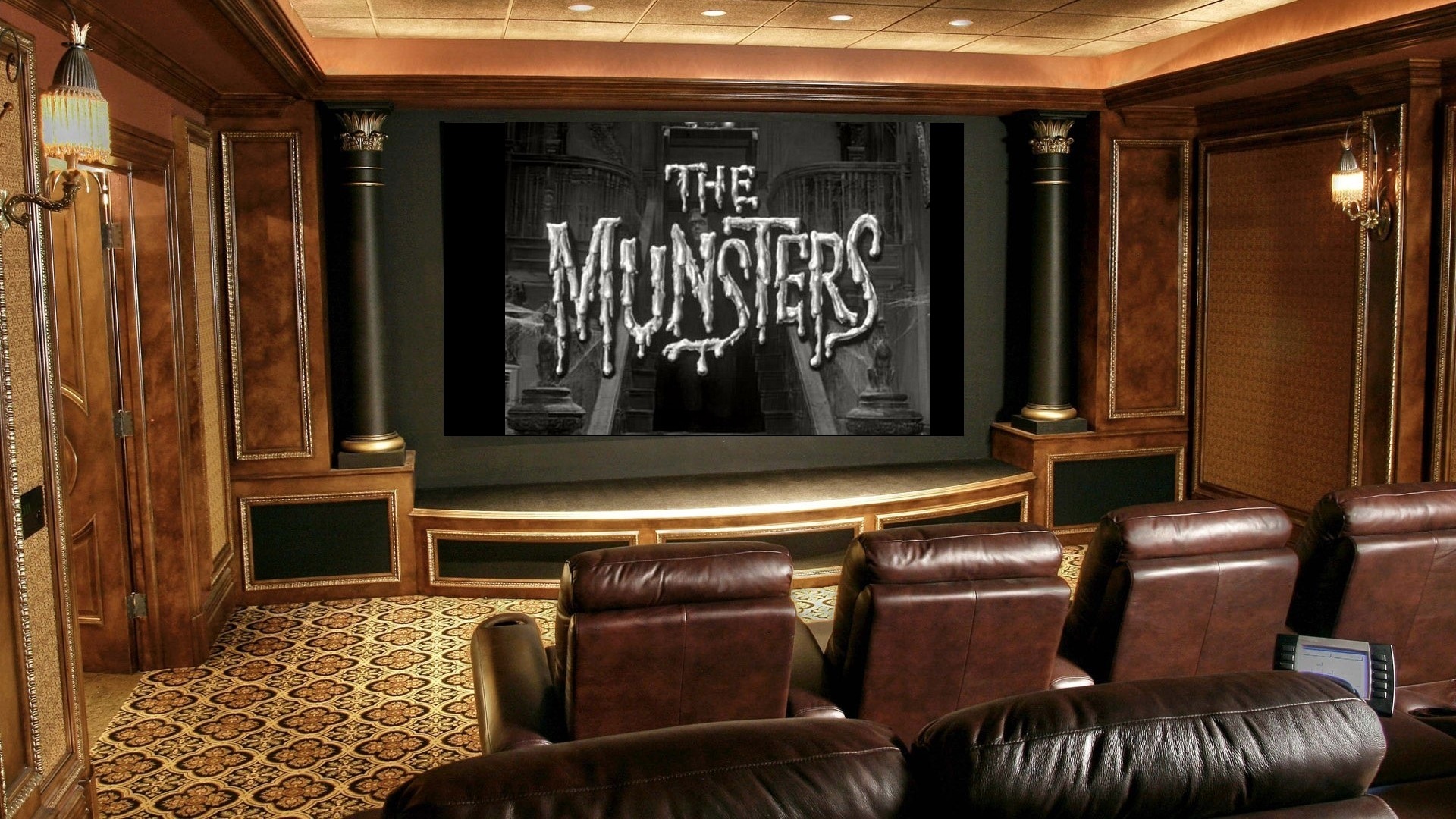 The default MB background picture is horribly boring and near-depressing. Thankfully, I can change it to literally whatever I want, which in my opinion is what makes the program one of the best — no restrictions, no fuss, no worries. Since my wife and I are huge fans of ‘The Munsters’ and ‘The Addams Family’, I decided to name our little theater “The Munster House.” So, I used a picture of a nice-looking home theater that I found on Google, pasted the TV show’s logo on the screen, and now use it as the main background when MB is turned on. (Pictured above) Things only get better once we start loading the hard drives with some content.

For ripping my Blu-rays and DVDs, I use MakeMKV, which records exact copies of the discs with lossless audio. I actually rip only the movie, audio and subtitles, and ignore everything else. After placing each movie in separate folders, I use another program that downloads the metadata and excellent high-res backgrounds, storing it all within the same folder. When I turn on MB, I see the information and artwork as I navigate the screen. This looks very cool when searching for what I feel like watching.

I also wanted to organize all my movies by genre, box sets and studio (only for Disney and Pixar). At the MB forums, I found a great community that shares custom-made backgrounds and icons for the movie folders. I went with a collection of icons from Xzener and backgrounds by me23. Furthermore, I was directed to a neat program that searches through my library of movies and organizes them all according to genre. I still had to arrange the box sets and studio folders on my own, but the program definitely helped to eliminate some tedious work. If I wanted to, I could apply the same method used for making the startup background, like so . . . 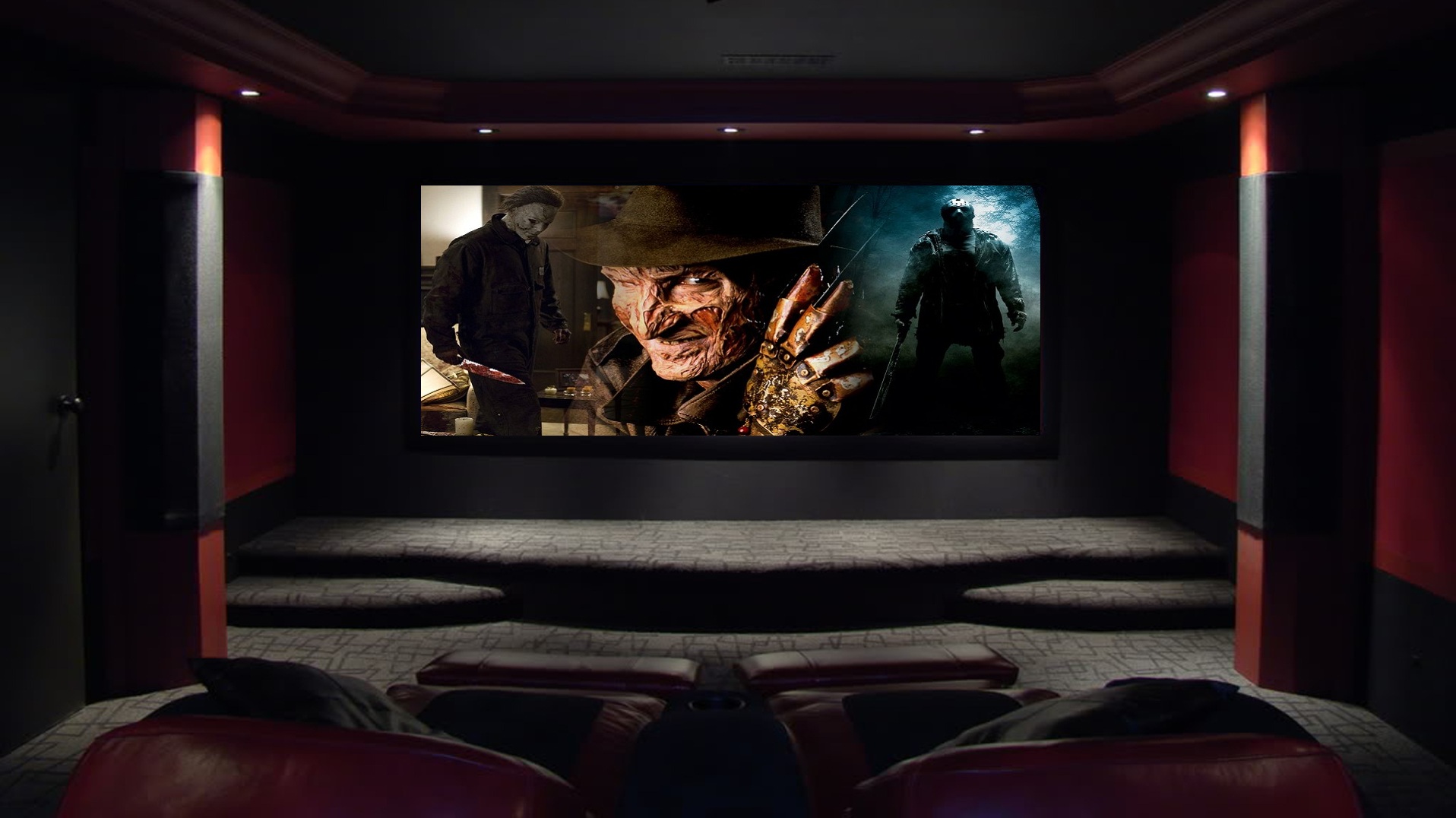 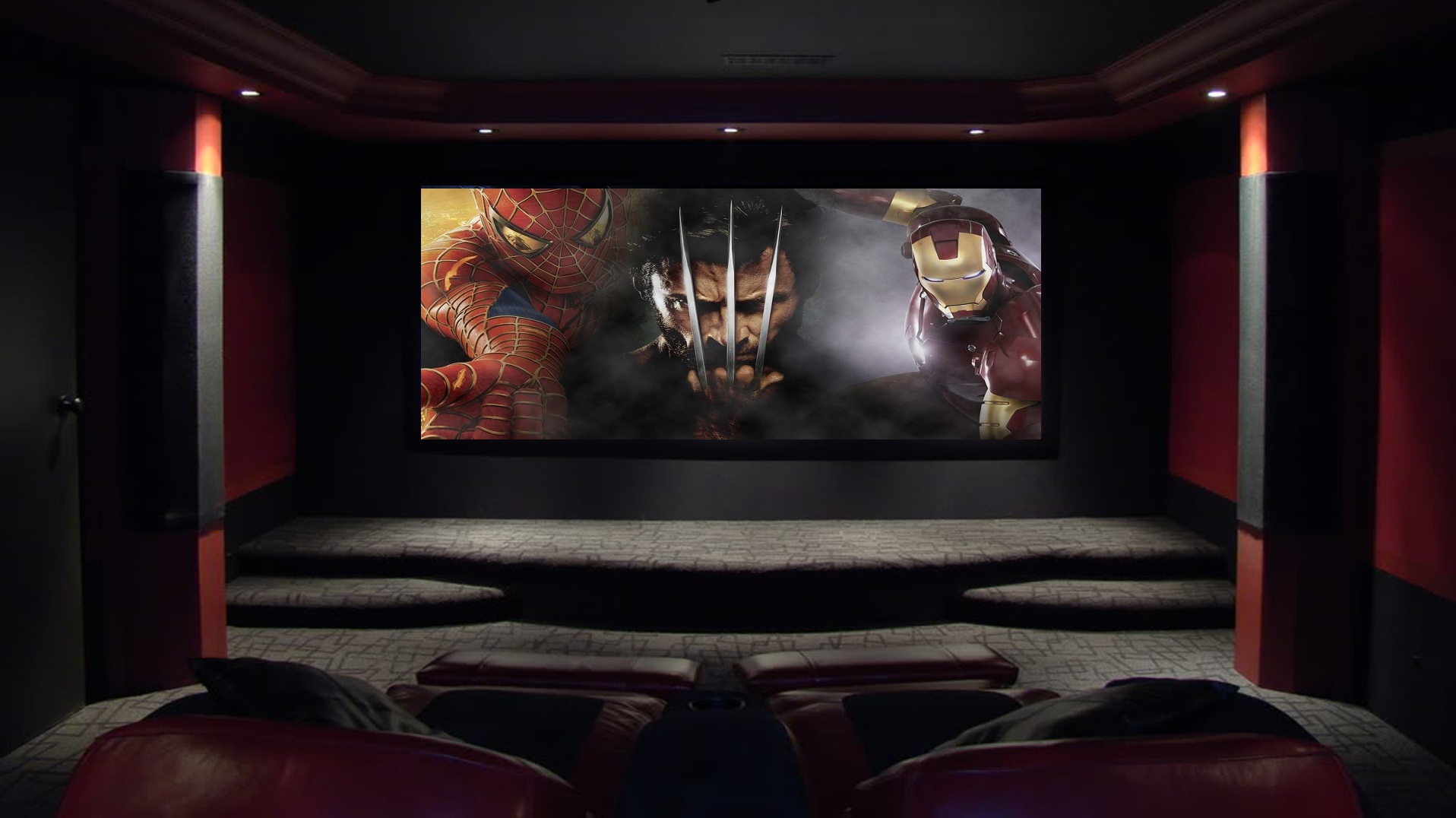 The next two screengrabs were taken while MB was on. I made them special just for Josh because I know how much he actually loves this particular theater. 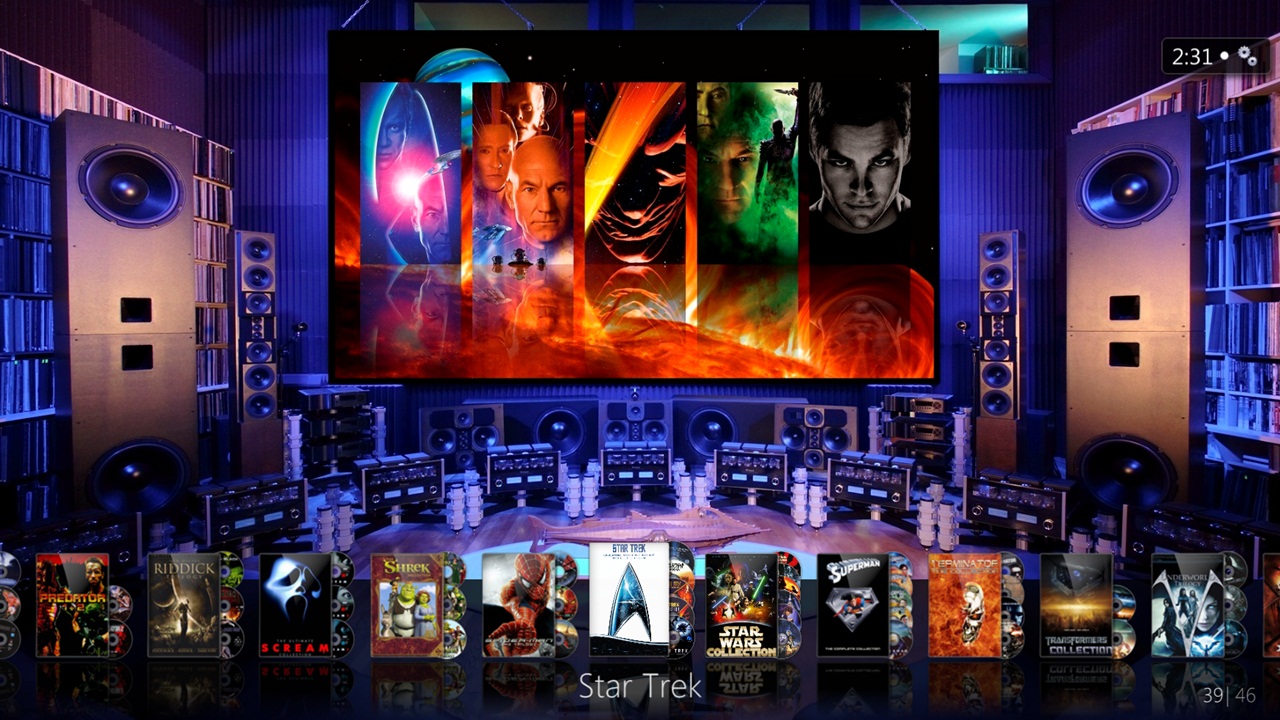 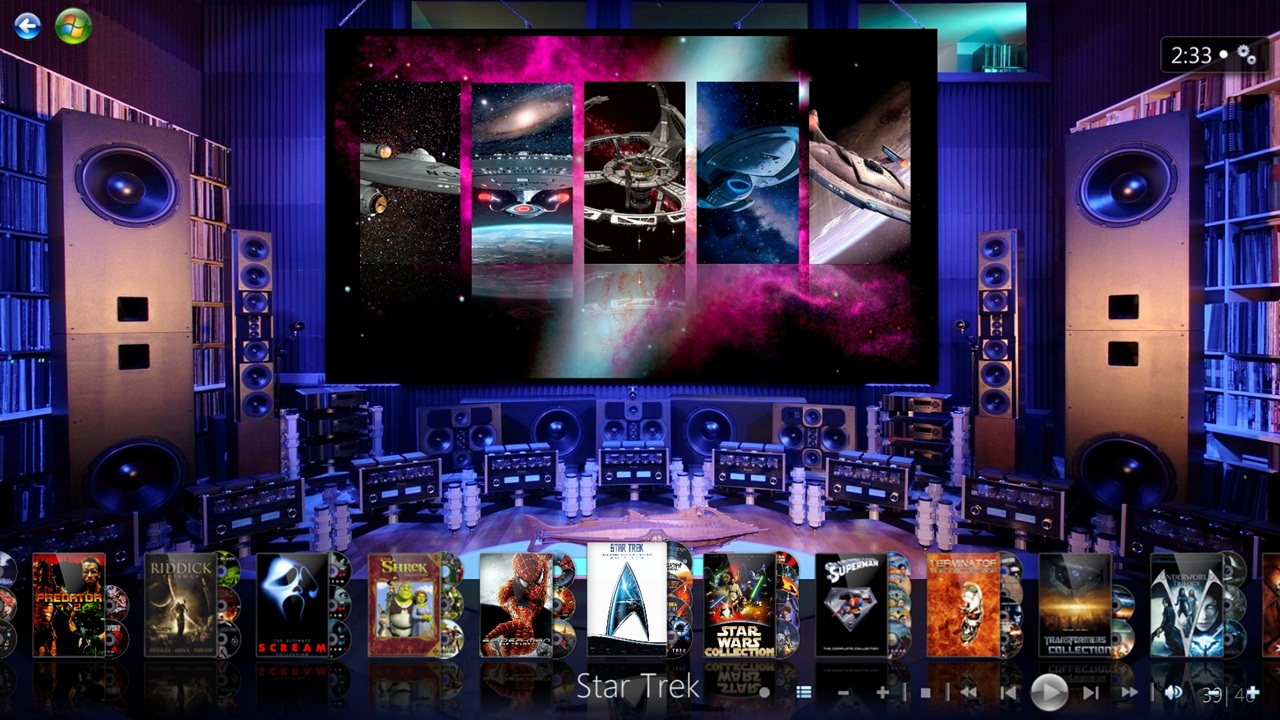 Organizing the collection and designing the look of MB turned out to be more fun than I could have expected. Being a hands-on kind of person, I absolutely loved customizing the navigation system. The overall appearance, whether I’m surfing the genres or the box sets, is something that I’m very happy with. The real clincher in my opinion is being able to use my Harmony One with the program, thanks mostly to the Windows MCE remote. Logitech already has the settings for that particular piece of equipment in its software, so all I had to do was customize the button settings to my liking.

And so, without further ado, here’s a quick video of what it all looks like when I’m watching a movie using my new, totally-awesome HTPC. It’s all being controlled via the Harmony One, and I’m using music by deadmau5 just for amusement. (The video is supposed to be in HD, but I was having issues with it, so apologies if the quality is bad or if you notice any jerkiness. It’s due to the recording, not actual playback.)