As described in Part 1 of this article, after much internal debate and heavy reading on the subject, I decided to build my own HTPC and customize it to my preferences. With the help of a very much appreciated buying guide written by Assassin HTPC Custom Entertainment, I determined the parts needed to create this new, fancy addition to my home theater setup. For anyone interested in such equipment, I highly encourage using the invaluable guide and visiting Assassin’s blog for further assistance. It’s well worth the effort when you end up with an awesome machine that stores all your media and provides quick access to your Blu-rays, music and photos.

As an added bonus, you can also use your HTPC to watch television, HULU, Netflix, VUDU or whatever else you can find over the internet. The biggest surprises to me were being able to bitstream high-resolution audio to my A/V receiver and watch 3D movies, either through a video card or thanks to the latest CPUs with excellent video graphics. Naturally, I went with a build that would allow me to take full advantage my already-existing setup, which Assassin amusingly describes as a “V8 Turbocharged sports car” in his guide. This particular build is based around the Intel i3-2100 processor in the Sandy Bridge line of microarchitectures. 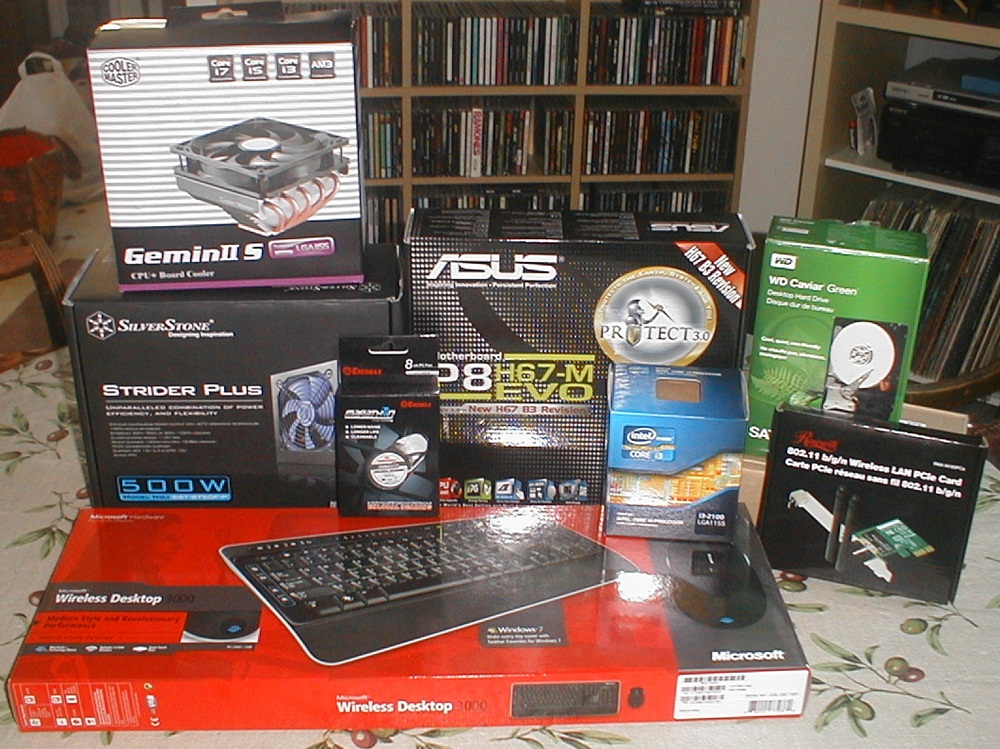 I was tempted to go with the new i7 for a while, possibly the 2600k, but after asking Assassin about the differences, he explained that unless I plan to do a lot of 3D gaming there’s really no advantage. Besides, that processor is intended more for those who do tons of transcoding — digital-to-digital conversion transfers of data taken from sources like HD cameras. Basically, unless you work in the film industry editing or doing visual effects on 4k digital intermediates, the i7 is overkill. I’d have to spend double the amount without ever actually using the chip to its full potential. In the end, the i3 is really all I need for an outstanding HTPC that doesn’t require too much power and produces even less heat. (As a side note, Intel’s latest processor, codenamed Ivy Bridge, debuts for retail purchase in April and promises better overclocking, less power consumption and true 4k video playback. But again, the benefit is really for i7 users.)

The next logical step is deciding on a good quality motherboard with an LGA1155 socket, since Sandy Bridge was my choice of processor. Assassin recommends either the H67 or Z68 chipsets, which will take advantage of the CPU’s integrated HD graphics, eliminate the need for a separate video card, and in turn keep costs down. Both chipsets are quite similar, but the Z68 is best suited for gamers due to the excellent overclocking, the SSD caching feature and the ability to add a high-performance graphics card alongside the CPU. For non-gaming home theater enthusiasts, the H67 build is perfect for a dedicated HTPC. Since I have a preference for motherboards by ASUS, I went with the P8H67-M EVO.

What sold me on this particular model was the fact that it comes fully loaded with by far the most user-friendly BIOS interface I’ve ever experienced. It has no need for any software updates. It comes ready to handle high-resolution audio in 8 separate channels via HDMI or 5.1 through the analog ports, which music audiophiles can use instead for 2-channel stereo. The model also includes an eSATA port, which will come in handy for future use. Best of all, it natively supports hard drives larger than 2.2TB without having to partition them as GPT. (The MBR partition style of other motherboards is limited to recognizing only 2TB of storage space or less.) 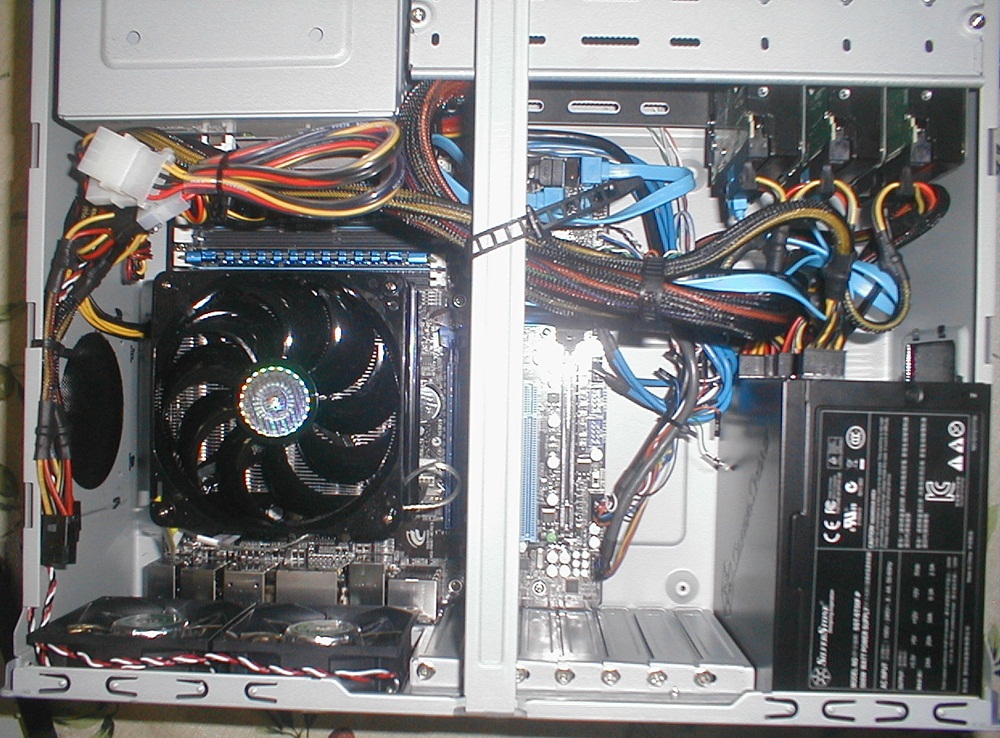 After buying a pair of G.Skill Ripjaws for 4GB of memory, I purchased another pair of 3TB hard drives from Western Digital’s Caviar Green line. I know they’re big, but believe me they’ll get filled very quickly. I’m also now a convert for SSDs (Solid State Drives), and cannot recommend them enough. The difference in boot-up is simply amazing while the rest of the system runs super smooth and fast at a whisper-quiet noise level. They’re very much worth the added price. I went with the Crucial M4 64GB, dedicated only for the operating system and minor software programs. The other two HDDs are for the storage of movies and music. Then I ordered the Strider Plus modular PSU (power supply unit) from Silverstone because it allows the removal of unused cables and less clutter.

After that, I still needed to pick out the computer case I wanted. This is definitely the most subjective part of the build process because it’s a completely aesthetic choice. Some might like a tower case that stands nicely next to a desk, or maybe a small, space-saving desktop. Others, such as HT hobbyists with OCD like myself, might prefer something that blends in with the rest of the equipment and looks just like another piece of hardware. There are many companies out there that specialize in this area, like nMediaPC, Thermaltake and Lian Li. Personally, I love the look of Silverstone products, so I purchased the LC20 model in black without the optional remote. Then I added a wireless adapter card for internet purposes, of course, and installed a Blu-ray burner from Lite-On. 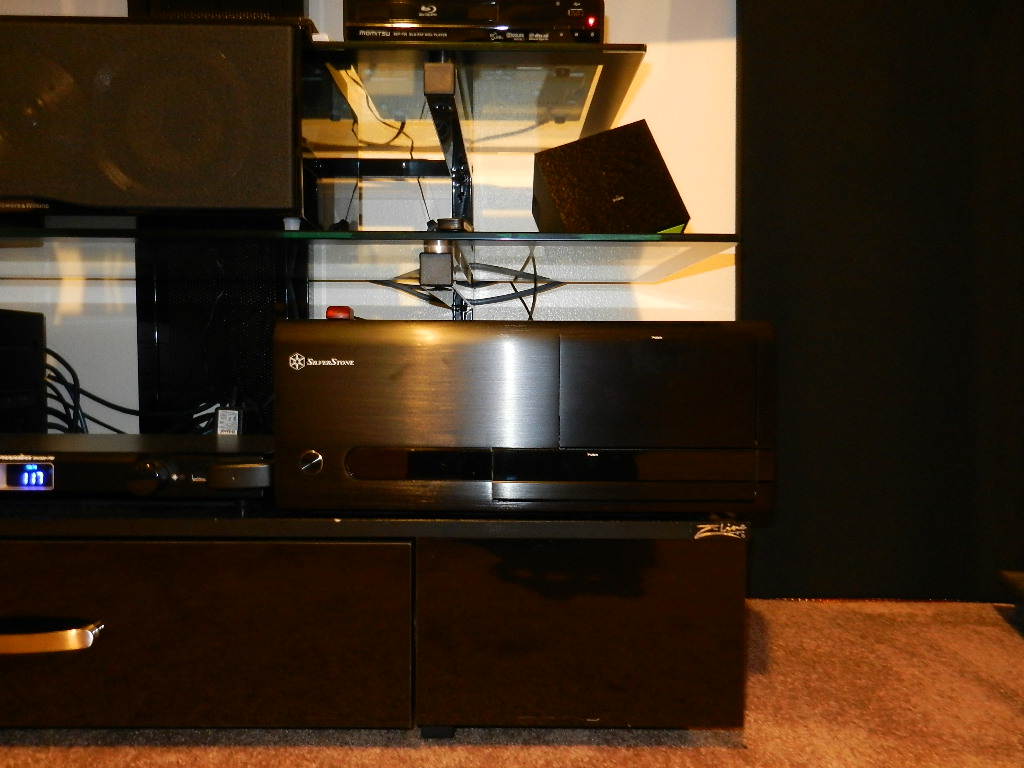 Finally, with everything put in place and built, I purchased a standard size wireless mouse and keyboard. I could’ve gone with one of those nice RF keyboards by Lenovo, but I don’t really care about something so small. Needless to say, these are necessary components for regular PC use and operations, like updates, internet, program functions and so forth.

I also wanted a separate media center remote, so I bought the affordable Windows MCE remote with an infrared receiver that plugs in via any available USB port. After customizing the power options on my new HTPC, changing power buttons to sleep and hibernate instead of shutdown, I programmed my Harmony One to communicate with the small IR dongle. (I’ll give details on this aspect in a later post.) I absolutely love this part of my new setup. I can control the computer along with everything else from a single remote. It’s awesome! Next time, I’ll explain the process for ripping my movies and the final end result with screengrabs and video.