The introduction of HDMI greatly simplified a lot of connectivity issues for home theater users. By combining the transmission of high-definition video and high-resolution audio all into just one cable per component, HDMI cuts down greatly on the cable clutter behind our equipment racks. This is a very welcome development. Unfortunately, at the same time, the technology is no longer as simple as just passing the signal from one end of the cable to the other. HDMI requires that the source and the destination “handshake” with one another before any signal can be sent. As I was reminded recently, that process doesn’t always go smoothly.

I have a lot of equipment in my home theater system, especially a lot of different source components. Just looking at those that I connect by HDMI, I have a cable DVR, a Blu-ray player, an HD DVD player and a PS3. That’s already enough to fill up all four of the HDMI inputs on my Lumagen video processor. When I wanted to add another device recently (more on that in a future post), I had to do some creative rewiring. I can route some of these through my A/V receiver first before they go to the Lumagen, but the receiver won’t pass 3D video, so that won’t work for the Blu-ray player or PS3. Although I could have made due for the time being with what I have, I felt that it would probably be worth the effort and expense to add a new HDMI switcher to my chain for further expansion in the future.

As a result, I purchased a 4×2 HDMI Matrix Switcher from Monoprice for a reasonable price. I connected the Motorola DVR, the Blu-ray player and the PS3 to it, consolidating those into one input in the Lumagen processor. This took a bit of work to rewire everything and reprogram my Harmony universal remote, but it all seemed to work… at first.

At some point, while I was watching a TV show through the DVR, I noticed that the high-def picture quality didn’t look quite as good as it used to. I checked the info screen on the video processor and discovered that it only reported receiving a 720p input signal. The station I was watching was one that broadcasts in 1080i, and I’d previously set my DVR to output 1080i, not 720p. In order to fix this, I had to shut off the cable box to bring up its setup menu, and reset the output back to 1080i. Upon doing so, my picture quality looked liked I had originally expected it to. “Huh, that’s strange,” I said.

Well, the next day, I went to watch TV again, and the Motorola DVR had reset again back to 720p. Long story short, it’s the HDMI switcher at fault. As the owner’s manual explains: “The source device will auto adjust the output audio and video signal that [are] supported by the sink devices (Output A or Output B).” In other words, every time I power up my equipment, the HDMI switcher handshakes with the source component (the DVR) and the destination component (the video processor), and forces the source to auto-adjust for a video resolution that the destination will accept. For some reason, the switcher is getting confused during this process and keeps telling the DVR that only 720p is accepted on the other end. I don’t have this problem with either the Blu-ray player or the PS3, just the DVR. It happens every single time, and there’s no way to make the components handshake correctly.

This quickly became a big nuisance, having to reset my DVR for 1080i every time I watched TV. Worse, I’m not even able to do it if the DVR is recording anything at the same time. I have to wait until all recordings finish, and just put up with the 720p resolution until that happens.

Needless to say, that wasn’t acceptable. After a few days of this, I did some more rewiring so that the DVR no longer passes through the HDMI switcher. It goes straight to the video processor again. (I also had to reprogram my Hamony remote for the new configuration.) That immediately solved the problem. The DVR and video processor handshake with each other correctly without the switcher in between, and the DVR outputs 1080i resolution like I wanted.

At the end of all this, I got everything to work, but it was a hassle to get there, and a reminder that the convenience of HDMI sometimes has its drawbacks.

Here’s a look at the current color-coded connectivity chart for my home theater gear. Click to enlarge: 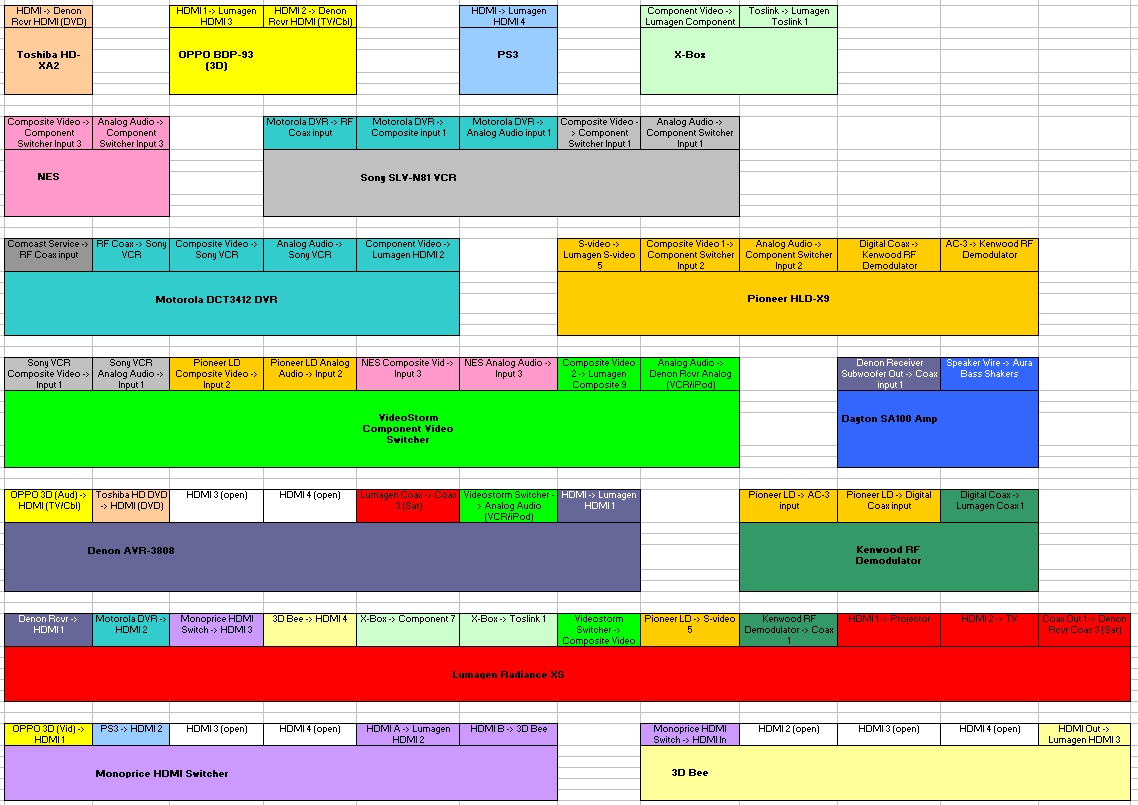