About a month ago, I detailed the trauma of what happened when my DVDO video processor – the central hub of my entire home theater system – suddenly died on me without warning. At the time, I made the decision to replace it not with the same or newer DVDO model, but rather with the comparable “Radiance” model from competitor Lumagen. For various reasons, I held off installing that until this weekend. That turned out to be a much bigger challenge than I expected, but I hope the results are ultimately worth the effort.

For many years, I was a fan of the DVDO line of video processors from Anchor Bay Technologies. I started with that company’s iScan Plus V2 “line doubler” more than a decade ago, and dutifully upgraded through the product cycles to the iScan VP50Pro processor. Unfortunately, I have not been very satisfied with the company in recent years. It discontinued all support for the VP50Pro (still allegedly its “flagship” product) almost two years ago, and has instead focused on stripped-down, lower-end products that just don’t meet my needs. Frankly, I think the company has lost its way.

Despite some ongoing glitches and annoyances, the VP50Pro continued to mostly do everything I required of it until recently. One big problem is that I’d been planning to upgrade to 3D, and the VP50Pro doesn’t support that at all. This was one of the factors that caused me to continually delay those 3D upgrade plans. However, when the VP50Pro crapped out on me out of the blue, I decided that I’d replace it with the Radiance-XS from Lumagen, which is extremely comparable in most features, plus has the ability to fully process 3D signals. Also, Lumagen has a better reputation for supporting its products when users report issues or request feature upgrades. Looking on the site’s support page, the Radiance-XS has received 26 firmware updates this year alone! Meanwhile, DVDO hasn’t updated the VP50Pro since 2009.

Nonetheless, once the Radiance-XS got here, I let it sit in the box for the better part of a month. The reason for this is that, while I was waiting for the Radiance to arrive, I was able to swap out my VP50Pro for DVDO’s previous model, the original VP50, which I happened to still have sitting in my closet. I’d never gotten around to selling the VP50 after I upgraded to the VP50Pro. That was a relatively painless stop-gap solution. Frankly, there isn’t a whole lot of difference between the VP50 and the VP50Pro anyway. I made all the same connections, and virtually the same setup programming. That was good enough to hold me over for a while.

So, why change everything this weekend? Well, I’ve finally made the plunge into 3D! My new JVC DLA-RS40 projector arrived, and I needed a fully 3D-compliant signal chain to support it. I’ll write more about my first impressions with the projector soon. In the meantime, it took a lot of work to get everything else up and running before I could even install it.

First off, I had to rewire everything. And I mean everything. The 3D signal pathways require a totally different connection layout than I’d used previously. For one thing, my A/V receiver doesn’t support 3D passthrough, and I have no intention of upgrading it just for that feature. So I have to route audio directly to my receiver and 3D video separately to my VP, rather than switch everything in the receiver as I had in the past. Due to the limited number of HDMI inputs on my equipment (and a large number of HDMI sources), accommodating the 3D Blu-ray player in this way affected how many of my other components were routed as well. It took a lot of time to map all that out. Because I’m obsessive, I keep a color-coded chart that shows how everything is hooked up to everything else. Here’s what the current version of that looks like. Click to enlarge: 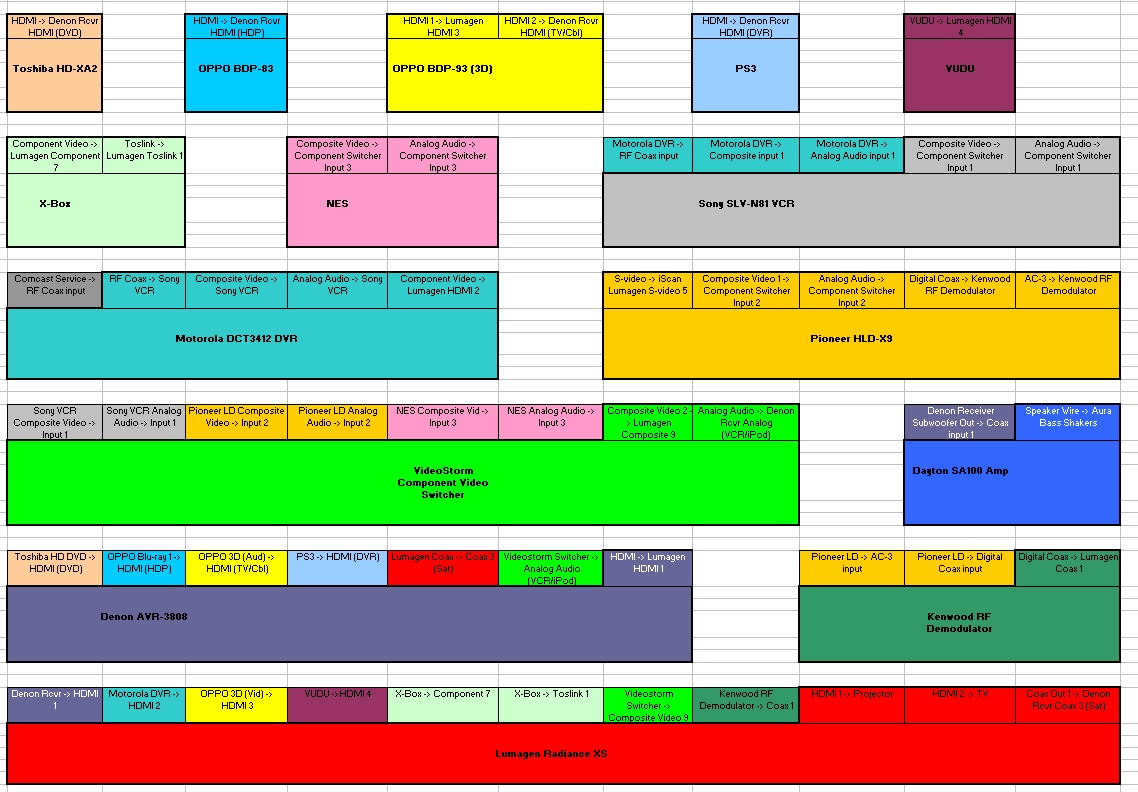 Then of course came the physical act of actually unplugging everything and making all those connections. I spent a lot of time hunched down behind my equipment rack with a flashlight. But that wasn’t even the hard part. Once everything was wired in, trying to set up the Radiance was an unexpectedly difficult ordeal – emphasis on the word “trying.”

Believe me, I have plenty of issues with DVDO these days. Yet one thing the company does really well is design its products with an intuitive and user-friendly graphic interface and setup process. As I discovered, Lumagen has a lot to learn in this respect. Quite bluntly, figuring out how to set the Radiance up was almost nightmarishly difficult. You practically need an advanced engineering degree just to turn the thing on. 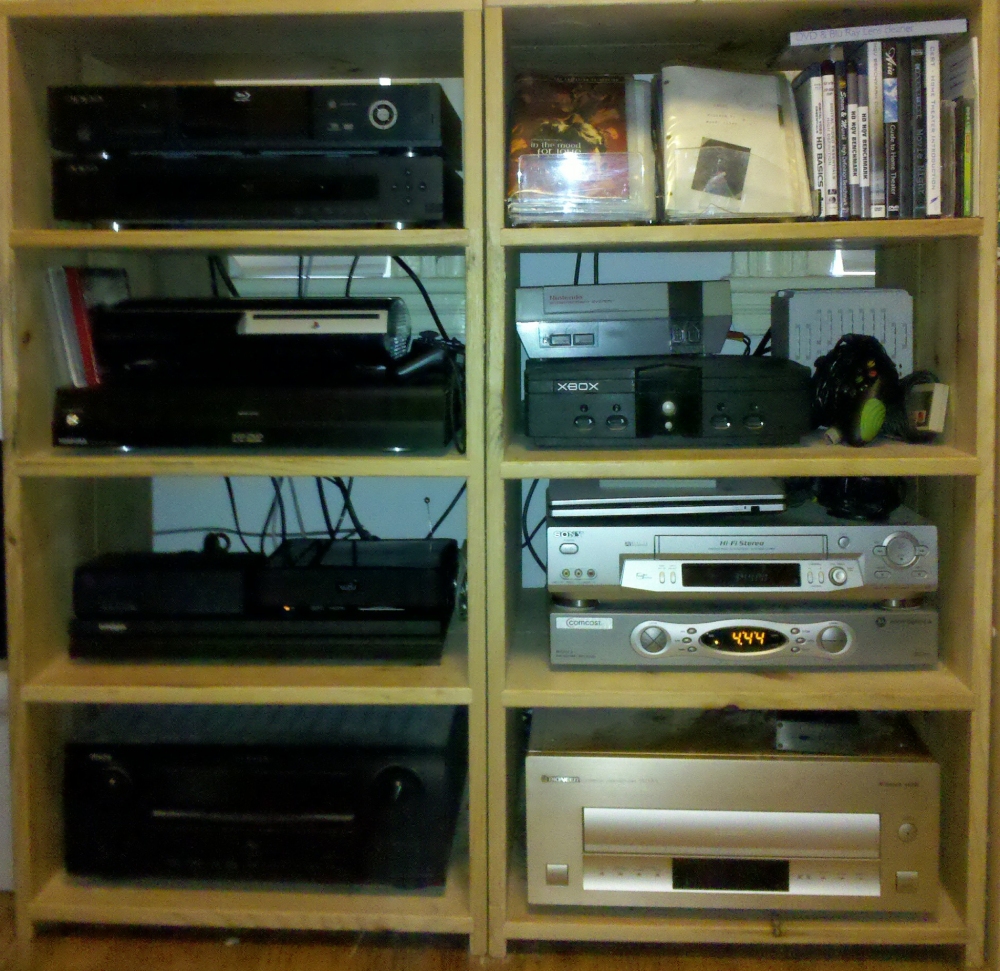 I like to consider myself a reasonably intelligent person with a great deal of home theater experience. (Hello, I am the friggin’ HD Advisor, after all!) Even so, the first time I pulled up the Radiance’s setup menus, I was utterly baffled by them. They might as well have been written in Klingon. And the user manual was little help. Because the processor’s firmware is upgraded so frequently, a lot of references in the manual to menu pathways no longer exist in the current firmware at all. I got precisely nothing accomplished the first day.

After a good sleep, I re-approached it in the morning and fortunately managed to figure out a fair number of things. I have an engineer friend who’d recently installed his own Radiance. He warned me about the setup, and provided me with a cheat sheet he’d written to get some basic functions dialed in. That was a godsend. Without that, I’d have been totally lost.

The processor’s user menus are confusingly arranged, and labeled with a lot of unclear terminology. There’s just nothing intuitive about the unit at all. One of the biggest issues that I had trouble getting used to is the way that many of the features and functions which logically should be associated with the processor’s output (for example, the signal resolution that you want to send to your display) are instead tied to the video inputs. So, if you connect to a 1080p display, you need to explicitly program every one of the Radiance’s video inputs to scale incoming signals to 1080p. There’s no universal “Everything goes to 1080p” option. (While there are some “Copy this setting” functions, it took me quite a while to figure out what I was copying and to where.) More than that, you need to independently program every single possible signal resolution that might come in on any of those inputs to scale to 1080p. If your cable DVR outputs standard-def channels at 480i and high-def channels at 1080i – separate settings. If you watch a Blu-ray and the player outputs the menu at 1080p60, the movie at 1080p24, and the SD bonus features at 480i – all separate settings. I found this kind of infuriating. This may be a case where the product has too much flexibility and control for its own good.

Another hurdle is the way that the unit is programmed with a number of shortcuts that can be accessed directly by entering secret codes into the remote. (The shortcut for switching your current video input to 1080p output is “Menu 0 2 7.”) This seems like a helpful thing, but there are some functions that can only be accessed this way, and lack normal menu navigation to find them. Frustratingly, the manual only lists a smattering of these codes. If Lumagen has a comprehensive list of them published somewhere, I haven’t stumbled on it yet.

After doing as much as I could on my own, I called up Lumagen and spent over an hour on the phone with the chief Support guy, who was enormously helpful. Credit where it’s due, everyone I’ve dealt with at Lumagen has been very knowledgeable, friendly, and willing to help. He patiently walked me through the setup and explained things that I simply never would have figured out on my own.

Admittedly, I have more complicated home theater hardware requirements than most users. I have a great deal of different video formats in my system, and all of my video is split between two displays: a 1080p projector that’s arranged in Constant Image Height format, and a small 1680×1050 LCD monitor off to the side. The latter proved to be one of my biggest obstacles. Although my previous DVDO processor was able to dial in the exact 1680×1050 resolution fairly effortlessly, doing so with the Radiance took a lot more work and required that my contact at Lumagen research the timing parameters and do some math for me. An average viewer with a single straightforward 1080p TV will probably not have issues like this. Then again, an average viewer with a single straightforward 1080p TV probably doesn’t need a product like this in the first place. 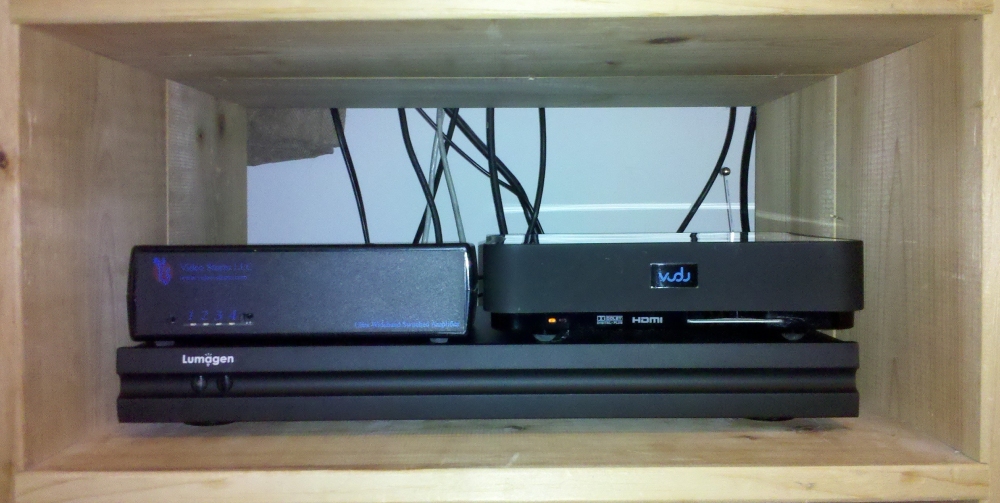 By the end of the second day, I’d finally started to get the hang of the processor. Nonetheless, I feel like most of this effort I expended was more about reprogramming myself to learn this complicated product, and less about programming the product to do what I need it to do.

With all that said, the Radiance-XS is a very powerful piece of hardware that appears to be able to do everything I could possibly want it to do, plus a lot more. It’s actually quite impressive. Once you struggle through the pain of setting it up, fortunately it seems to work pretty smoothly after that point. Many of the features fall into the “Set it and forget it” category, and don’t need to be fiddled with again after the initial programming. At least, that’s what I’m counting on. Now that the worst part is over, I anticipate this remaining an essential piece of my home theater system for a long time to come.

As if that weren’t enough, I also had to reprogram my Harmony universal remote to incorporate this new equipment. Because just about everything in my system gets routed through the video processor, this meant that all of the Harmony’s “Activities” had to be modified, which was a hassle in itself.

So yeah, I had a pretty busy weekend. What were you up to?