Barring an audio equipment upgrade that I have planned for the future, my home theater construction project was completed last year. However, I never really felt that it was finished, and small but lingering issues have continued to annoy me. I finally resolved one of those over the weekend with the long overdue installation of Belkin WeMo remote light switches.

This may seem like a minor gripe, but I’d grown increasingly irritated over the past year about having to get out of my chair and walk to the back of the room to turn the lights in my home theater on or off. I’ve wanted to remotely control my lights from my seat for a long time, but most of the home automation solutions I’ve looked at were far too complex and expensive for my needs. I don’t need my lighting put on a timer or tied to the control of anything else in my home theater. All I wanted was an inexpensive and easy to install DIY solution that would allow me to turn my lights on or off with the push of a button – preferably from my Android smartphone.

While WeMo is certainly not the only product of its kind on the market, its support for Android devices, the ability to connect multiple switches together in the same room, and its relatively affordable price (currently slightly over $40 per switch on Amazon) made it the most appealing for me.

Prior to this, I had a standard gang-plate of four switches just inside the entrance to my room. Unfortunately, as is often the case, I didn’t have the presence of mind to take any photos of this installation project until I was halfway through it, but here’s an old picture where you can see the switches in the distance: 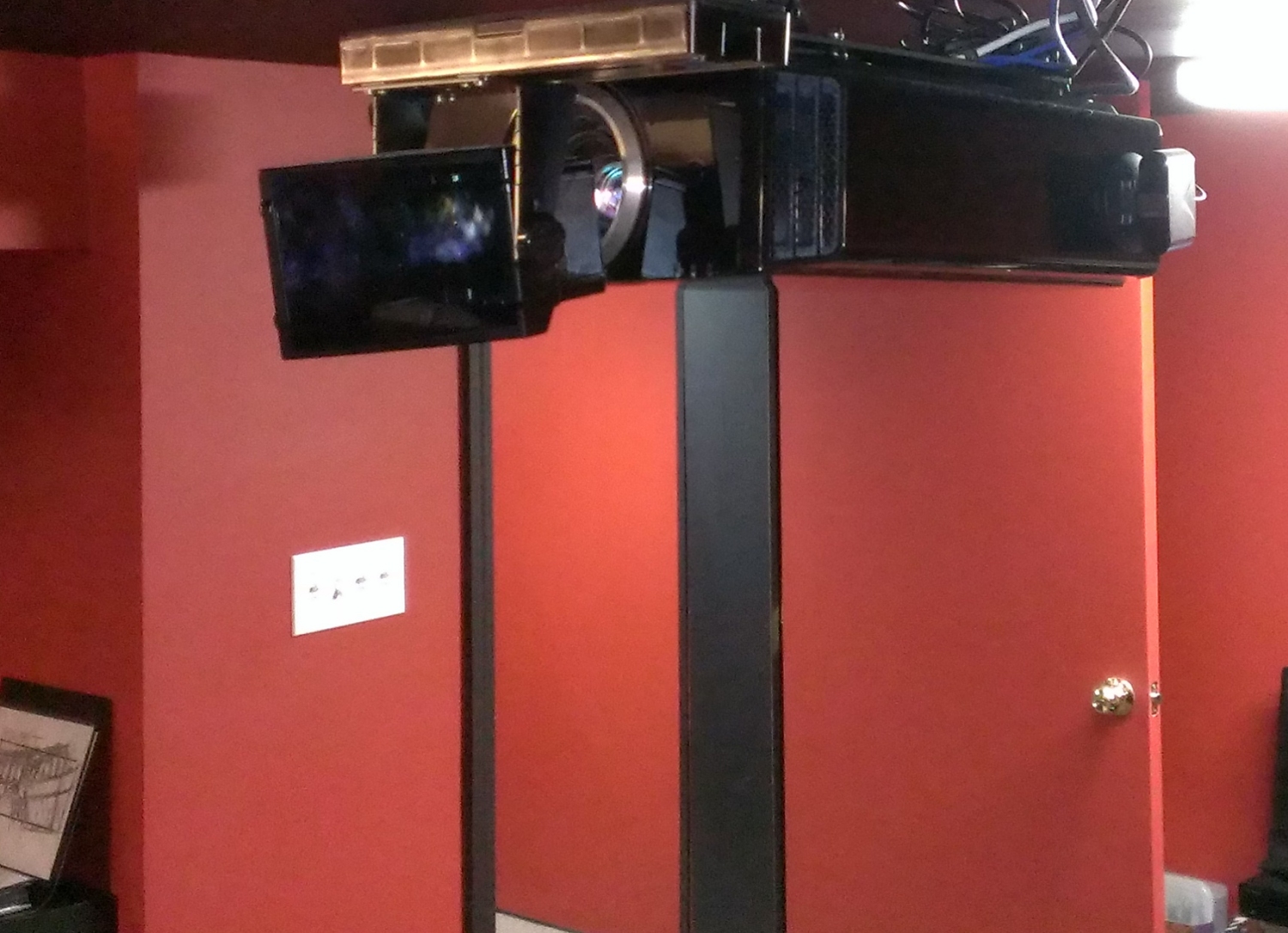 And here they are after I uninstalled all four switches and the plate. You get the idea. 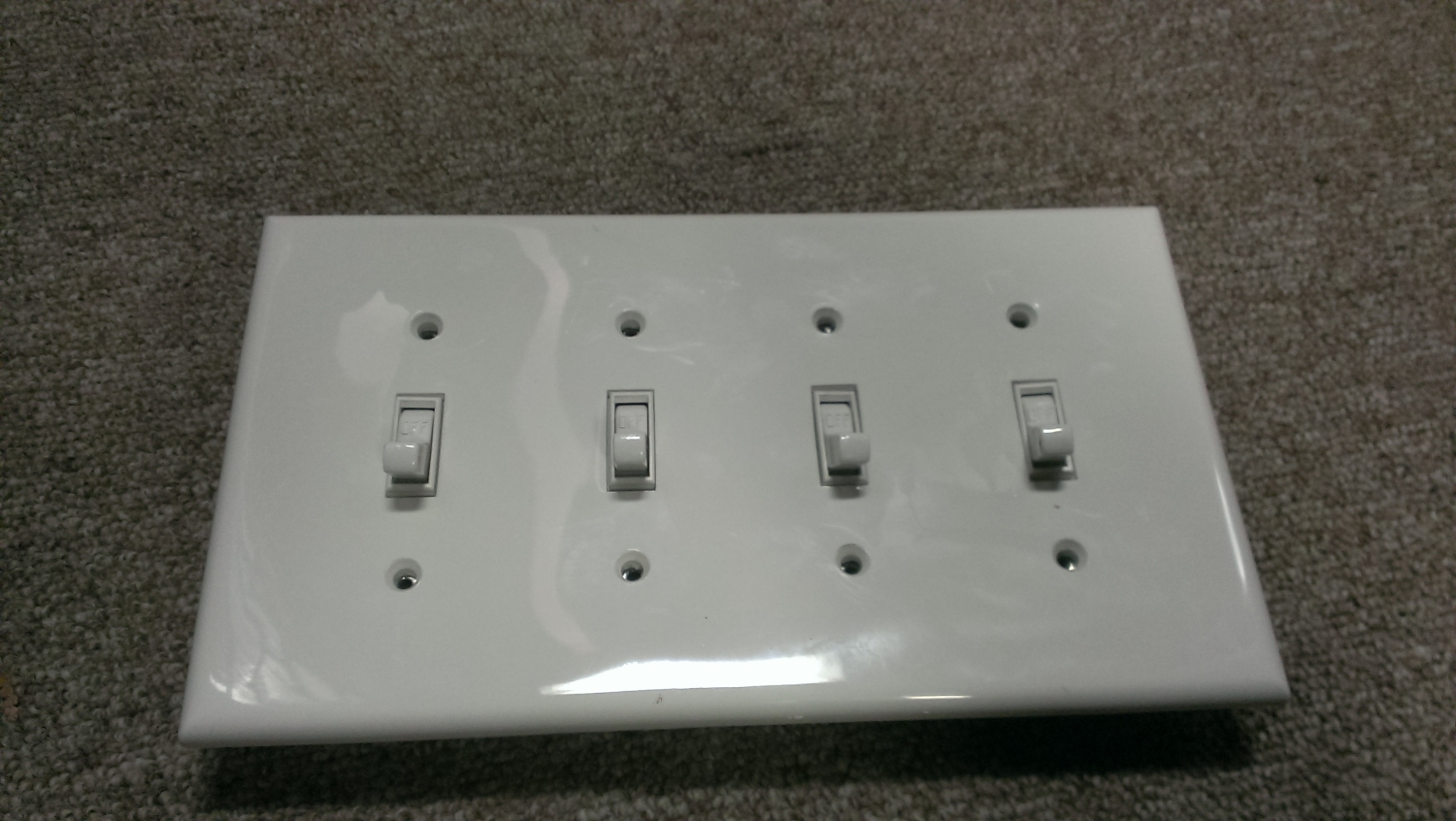 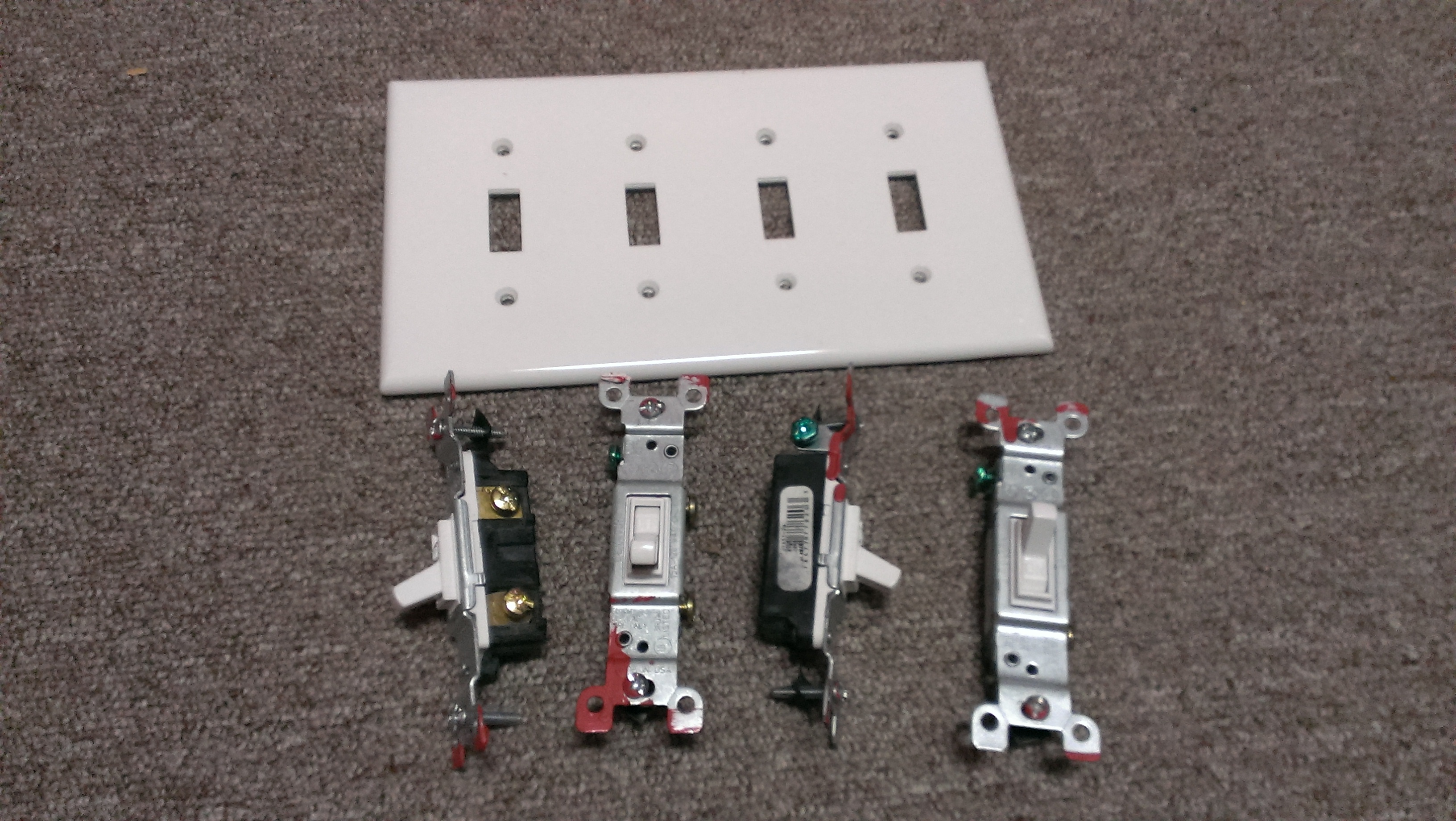 Don’t be an idiot and get yourself electrocuted. Whenever attempting any sort of electrical home improvement project, shut off the power to the affected wiring at the circuit breaker. This is not optional. 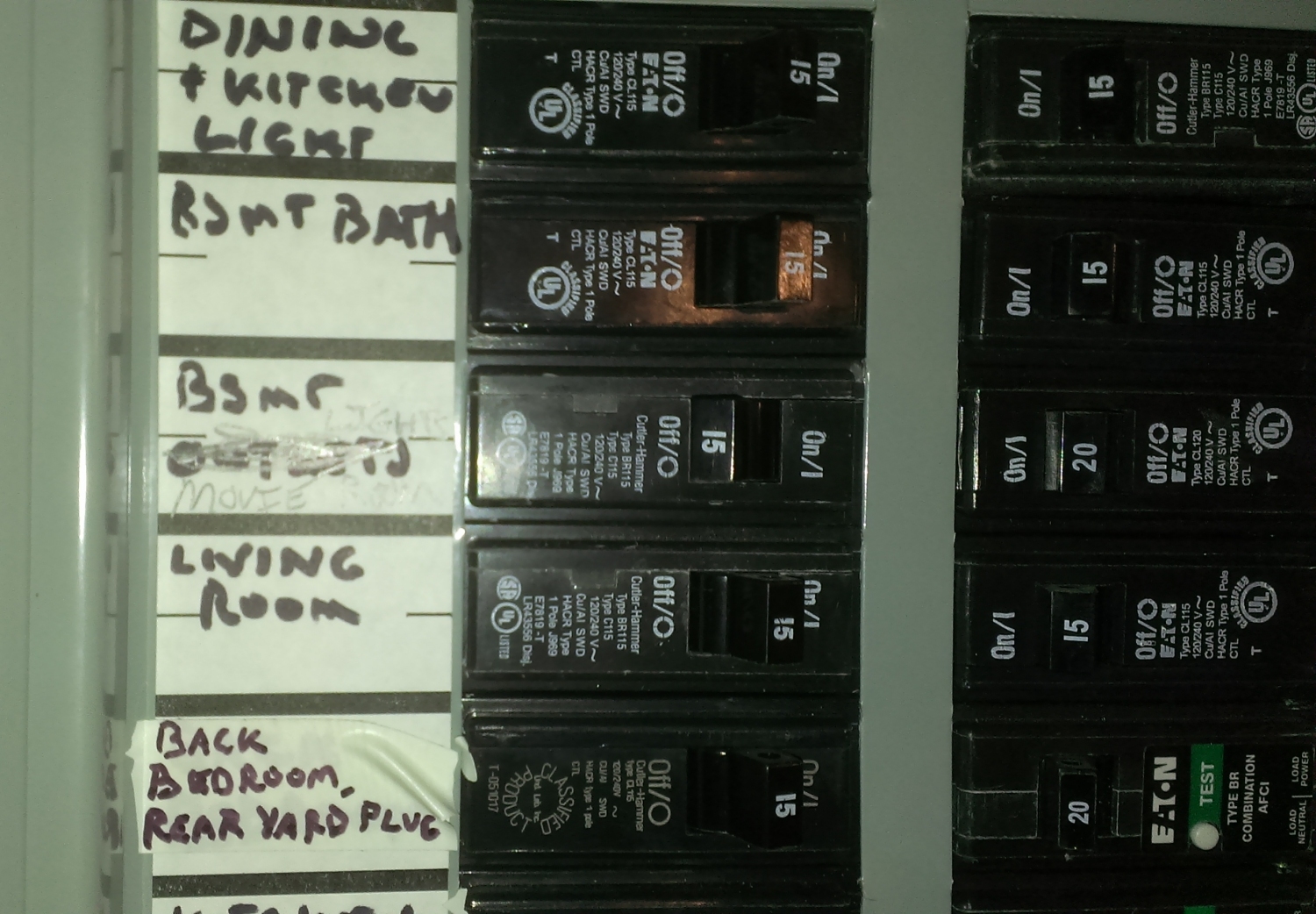 Of course, a consequence of this is that I lost all the lights in the room. Because this is a light-controlled home theater with no windows, I had to run an extension cord from another room and bring in a work lamp on a stand. Not a big deal, but a little annoying.

Getting the old light switches uninstalled is pretty straightforward, so long as you keep track of which wire goes where and don’t let them get mixed up.

The WeMo switches come with a very simplistic set of installation instructions. Basically, each switch has four wires (one ground, one neutral, and two live/load) that need to be connected to your electrical service using plastic wire nuts. The instructions cover this entirely in two illustrations. 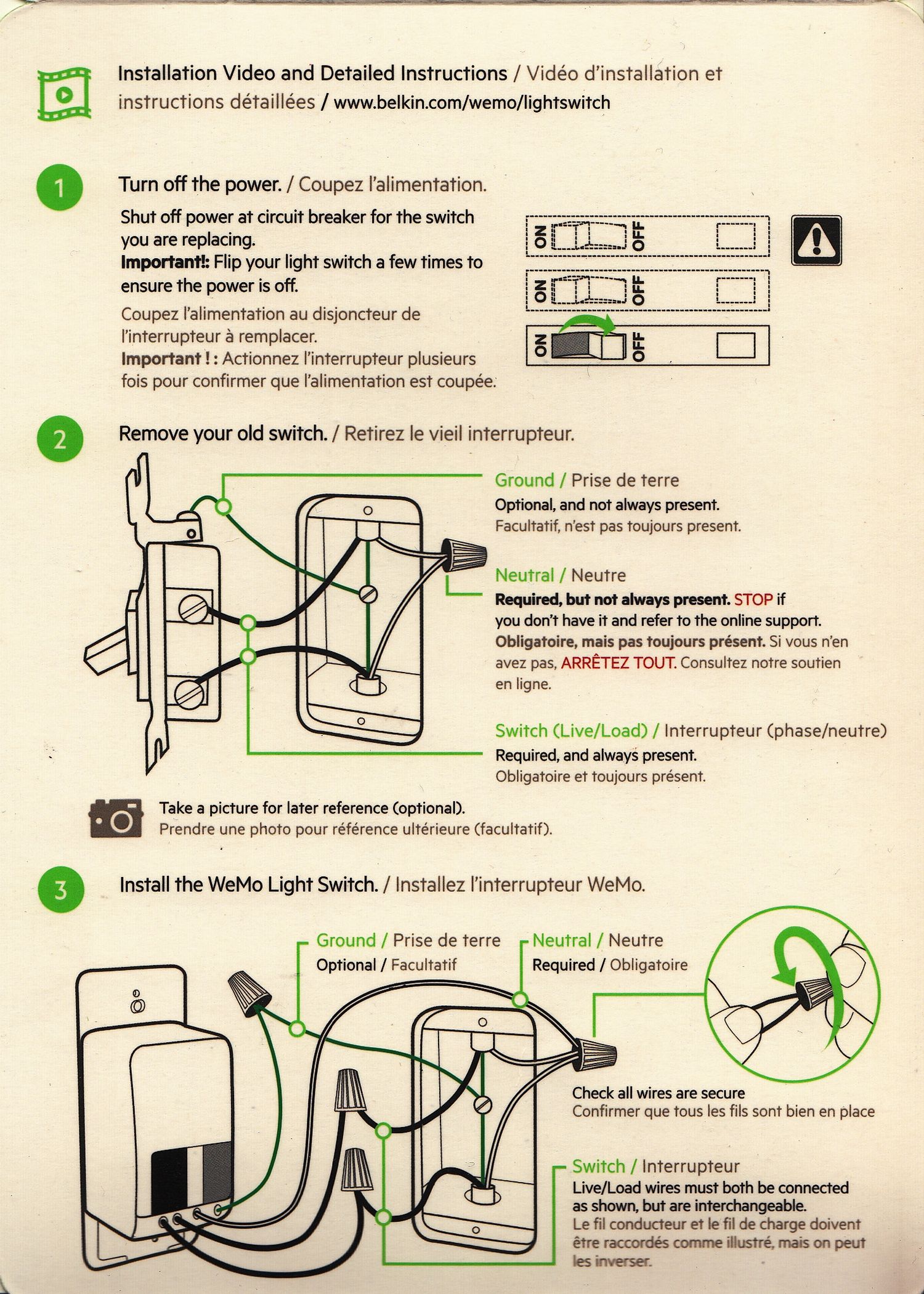 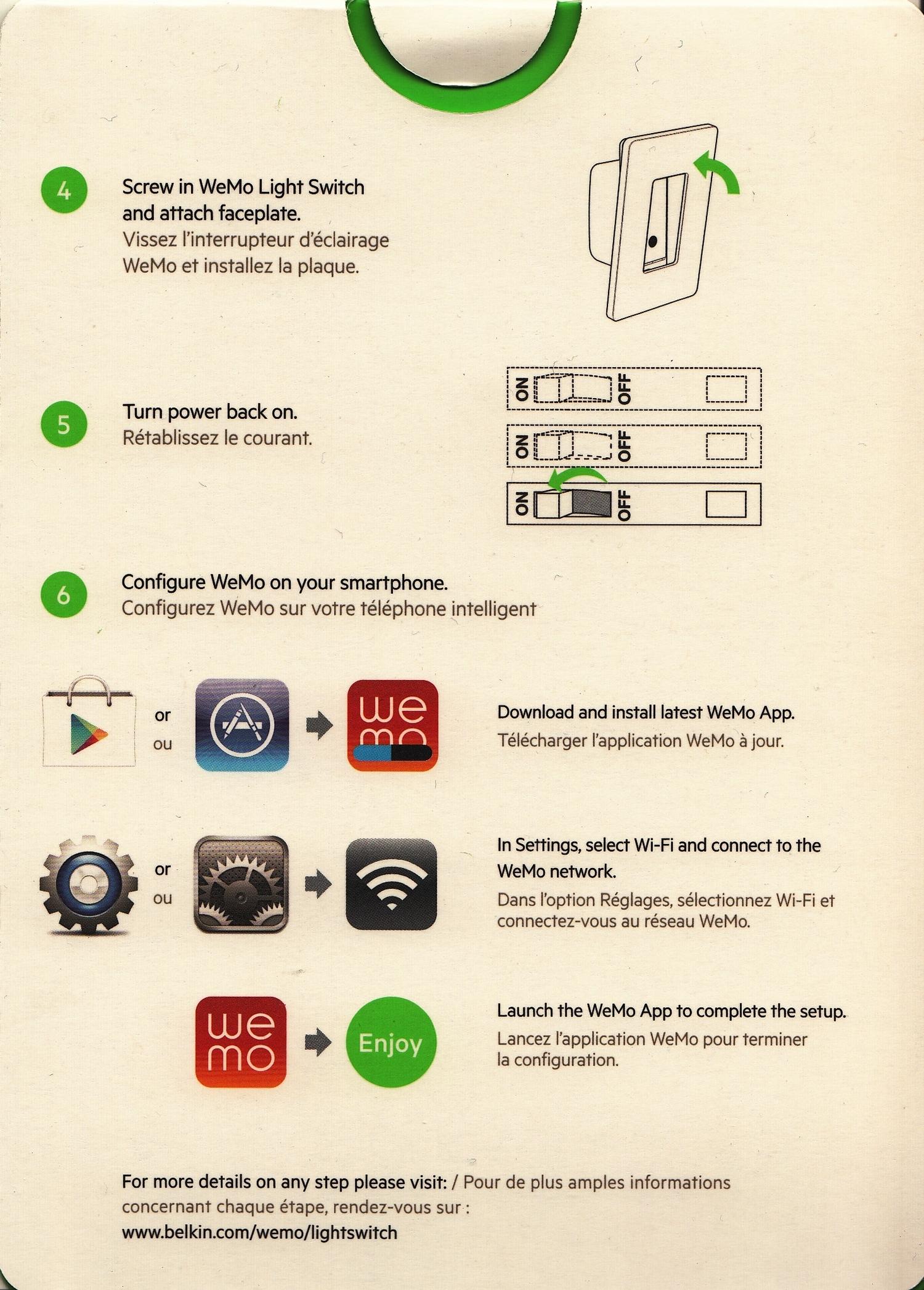 No big deal, right? Well, if I were only installing a single switch, I probably could have had this project wrapped up in ten minutes. Unfortunately, things get more complex when connecting a plate of four switches. First off is the obvious fact that you’ve now got a lot of wires to sort out. This was especially difficult when it came to the neutrals, which were previously wrapped in a bundle of five (one for each switch and one going out). I needed to add four more to that, which just plain wasn’t practical. What I had to do was create two separate bundles connected with a jumper between them. This isn’t at all covered in the instructions, but my father-in-law gave me some good advice to help me through it. 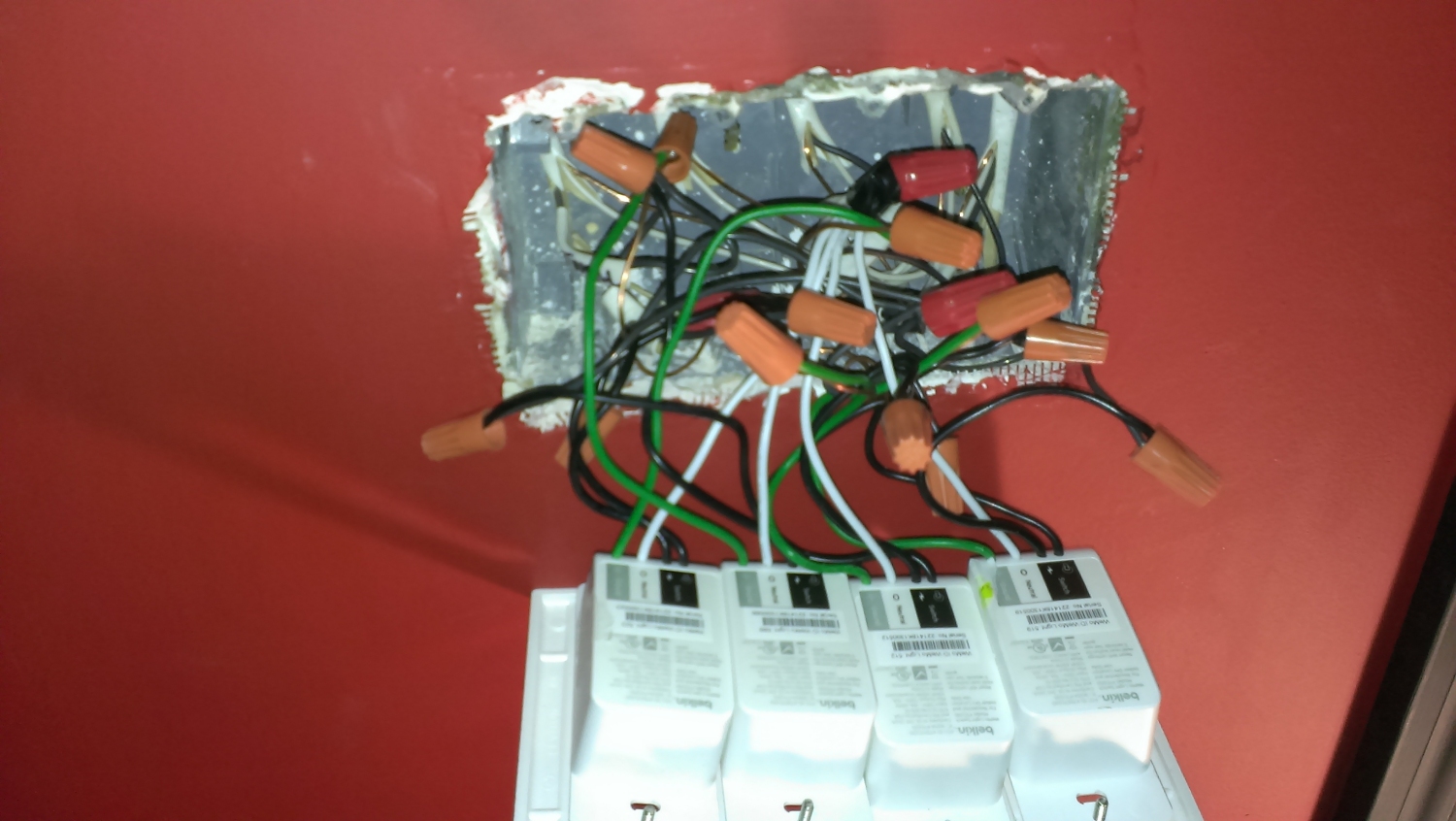 Even more problematic is that the switches themselves are much larger than the old flippy-type. Combined with all the extra wires and wire nuts, I had a very hard time cramming everything into the box. My first couple of attempts were dismal failures. I had to disconnect everything, lay out each wire, then connect and install the switches one at a time, carefully stuffing as many wires as I could behind each one. It’s a very tight fit in there, but I eventually got all the switches in. 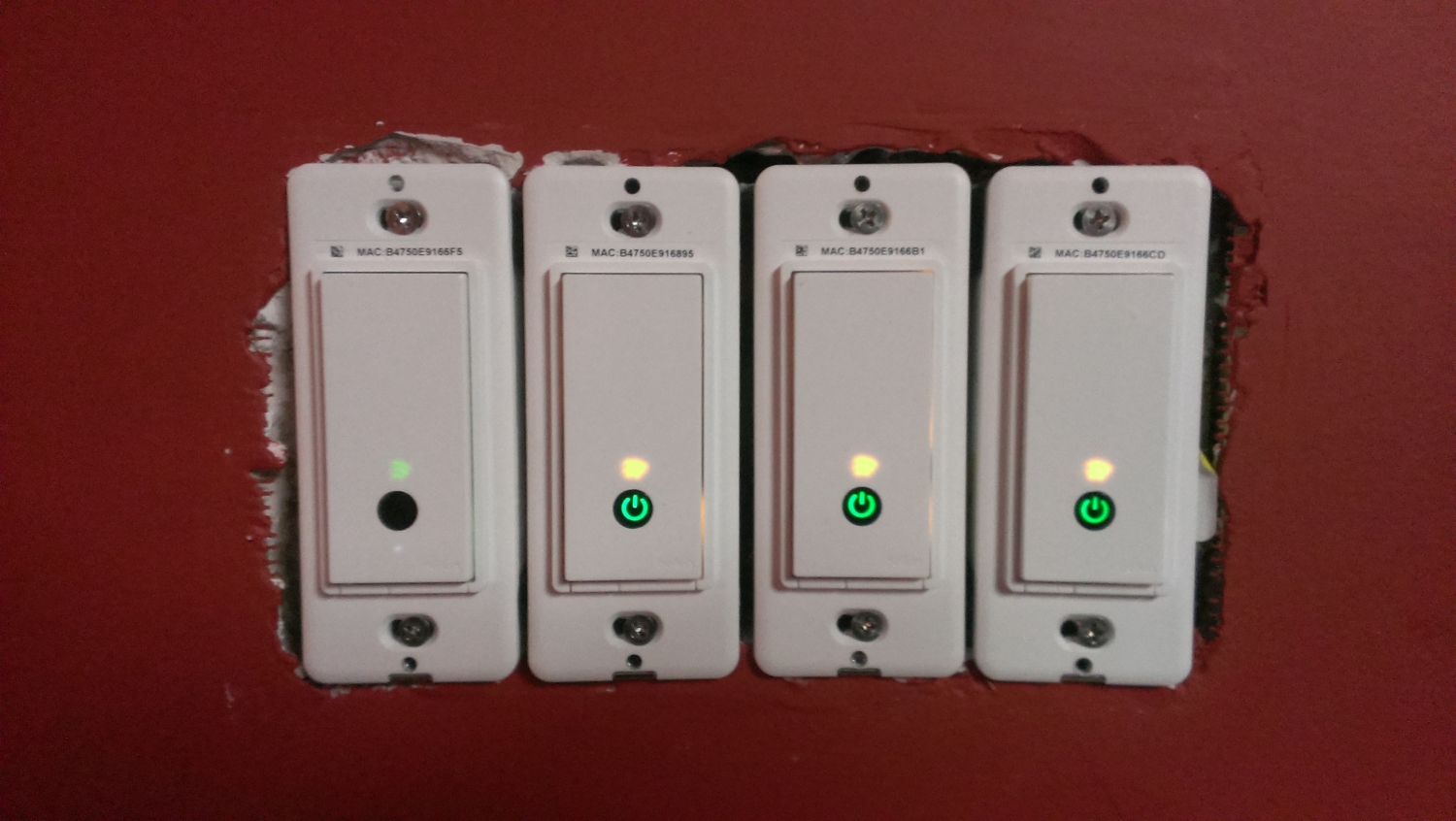 Each WeMo switch comes with a single faceplate. That didn’t work for my needs, so I had to purchase a separate four-switch gang-plate. Fortunately, the WeMo switches are a standardized size designed to fit any rocker-style plate. 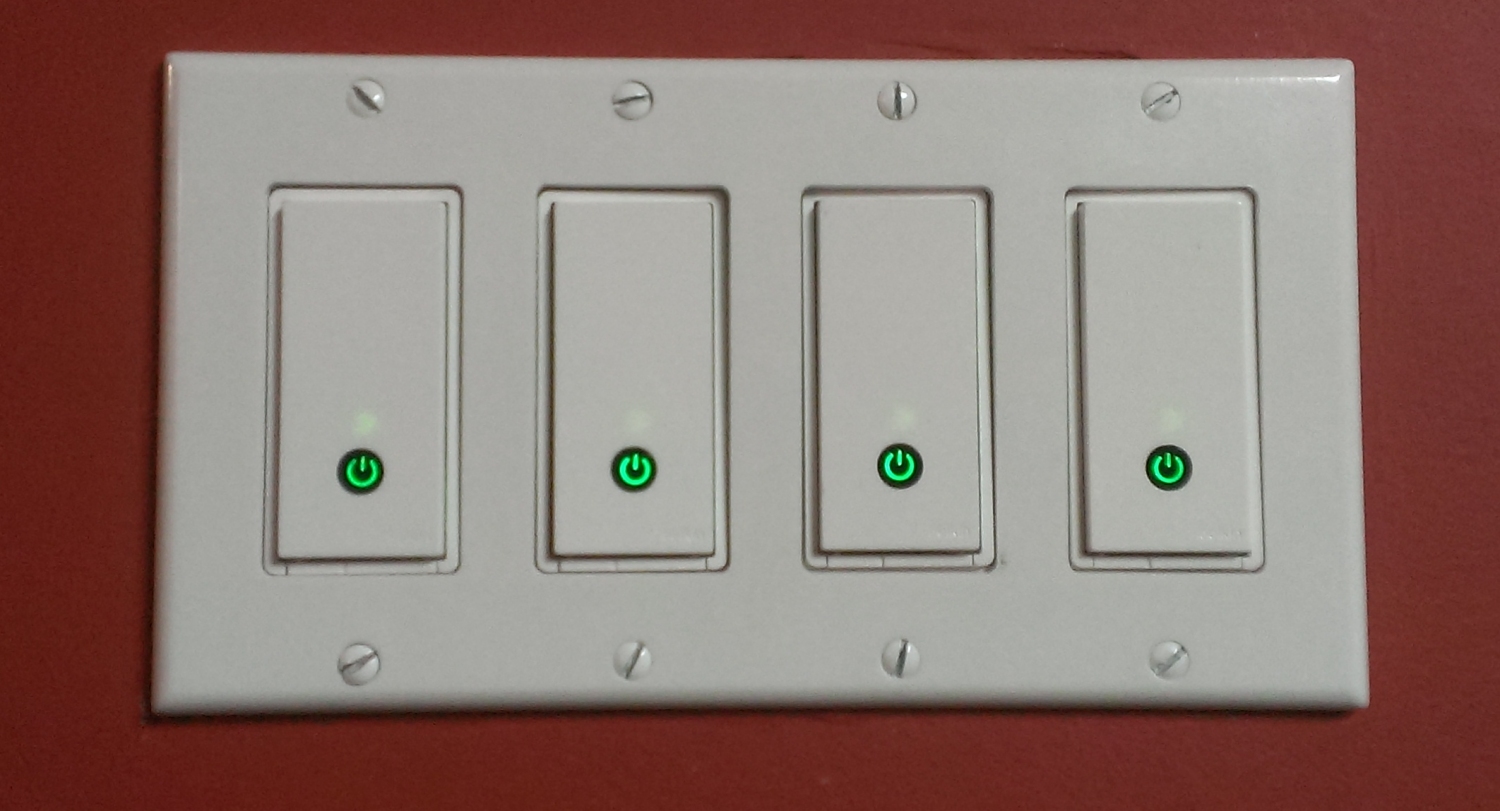 Voila! The hard part is done.

Step 3: Setting It Up

All that’s left is to turn the things on. To do that, you first must install the free WeMo app from the Apple or Google Play Stores onto your smartphone or tablet. 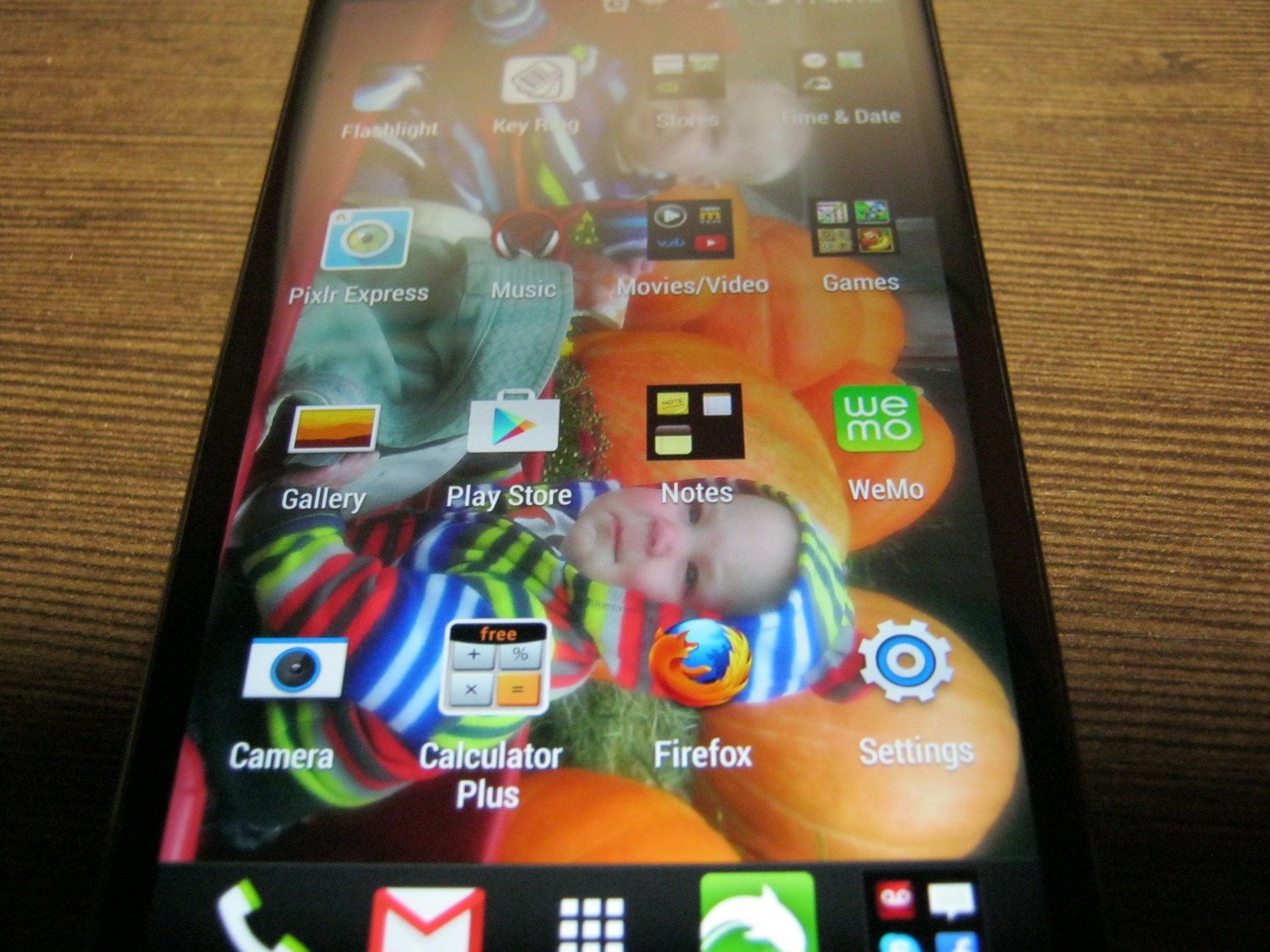 WeMo works using WiFi, so the switches need to be in range of a strong WiFi signal. Assuming you remember your network password (or have it saved somewhere), the setup process only has a few simple steps. With multiple switches, figuring out which new WiFi signal equates to which switch will involve some trial and error, but once you get it figured out, you can name each switch individually in the app. 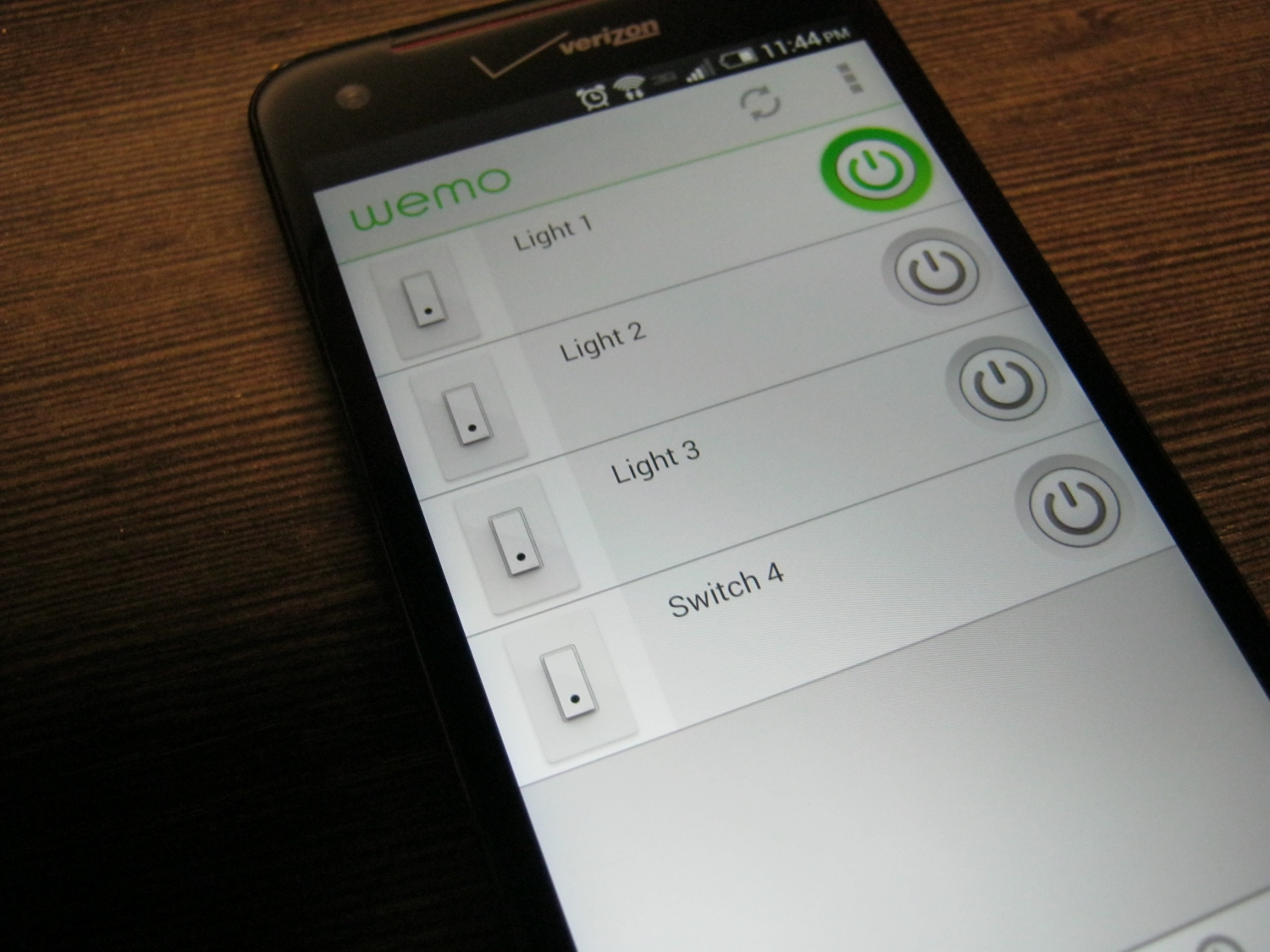 After all that effort, do the WeMo switches actually work as promised? Yes… mostly.

Honestly, my initial impression was that the WeMo app was frustratingly glitchy. I’ve had the switches installed for a couple of days now, and the app lost the WiFi signal and refused to connect to an individual switch enough times to be annoying. It would also sometimes flip a switch on its own a few seconds after I’ve taken an action (turning a light off right after I’d just turned it on, or vice versa). Typically, this can be resolved by going into the phone’s Settings menu and Force Stopping the WeMo app, then launching it again, which will re-establish the WiFi link, but that’s a real nuisance. There’s no “Off” or “Close” command for the app short of doing a Force Stop from the phone’s Settings.

Exiting to the phone menu doesn’t turn off the app; it just closes the display. I believe this was an intentional design decision to keep the WiFi connected so that the app is always aware of the on/off state of each switch. However, in practice, the constant use of WiFi will needlessly drain your battery. I’m not sure if it times out eventually, or only turns off when you leave the room beyond the WiFi range of the switches.

After first setting up the switches, the app prompted me to do firmware updates on all of them. I put this off initially, but finally agreed to it a day later. Once begun, a message came up stating that the update should take about 10 minutes, but that same message was still there saying “10 minutes” a good two hours later. Once again, a Force Stop seemed to fix the problem. I believe that the switches themselves actually got the updates, and it was only the app that was stuck. The switches work now and I haven’t been prompted to do any more firmware changes.

The jury is still out as to whether the firmware update fixed some of the WiFi glitchiness. At this particular moment as I’m writing this, everything seems to be working well. My fingers are crossed that I don’t have any more problems.

However, even if I do, these issues were relatively minor nuisances. The WeMo remote light switches serve their purpose and overall I’m very happy to be able to control my home theater lights without leaving my chair.

Update 2/27/16: See my Comments below this post regarding three of the switches inexplicably dying on me a couple months after the 1 year warranty expired. With this experience, I can no longer recommend this product.