When I added Dolby Atmos surround sound to my home theater a few months ago, I expected that to be the last major upgrade that I would tackle for a while. However, as these things usually go, making one big change inevitably prompted even more. Is it ever possible to be happy with what we have?

In my case, wiring my home theater for 7.1.4 channels of surround sound made me question the adequacy of some of my speakers – especially my center channel speaker, which is tasked with reproducing the majority of dialogue and significant portions of any movie soundtrack. I realized that this was a problem when I played a mono movie and found myself disabling that speaker in order to split the mono signal to my left and right front mains instead. If I’d had a better center channel, I shouldn’t have had to do that.

As I explained in my prior post after I made the Atmos upgrade, upgrading speakers is a little tricky for me, because all of the speakers I have are from a brand (Cambridge Soundworks) that isn’t even in the home theater market anymore. The company doesn’t make home theater speakers at all now. Fortunately, I’ve had a lot of good luck finding used Soundworks speakers for reasonable prices. The company used to have a big retail presence in my area, so its products (even high-end speakers) turn up pretty regularly on Craigslist and eBay.

Previously, I used a model MC300 speaker for my center channel, as you can see in this old photo. 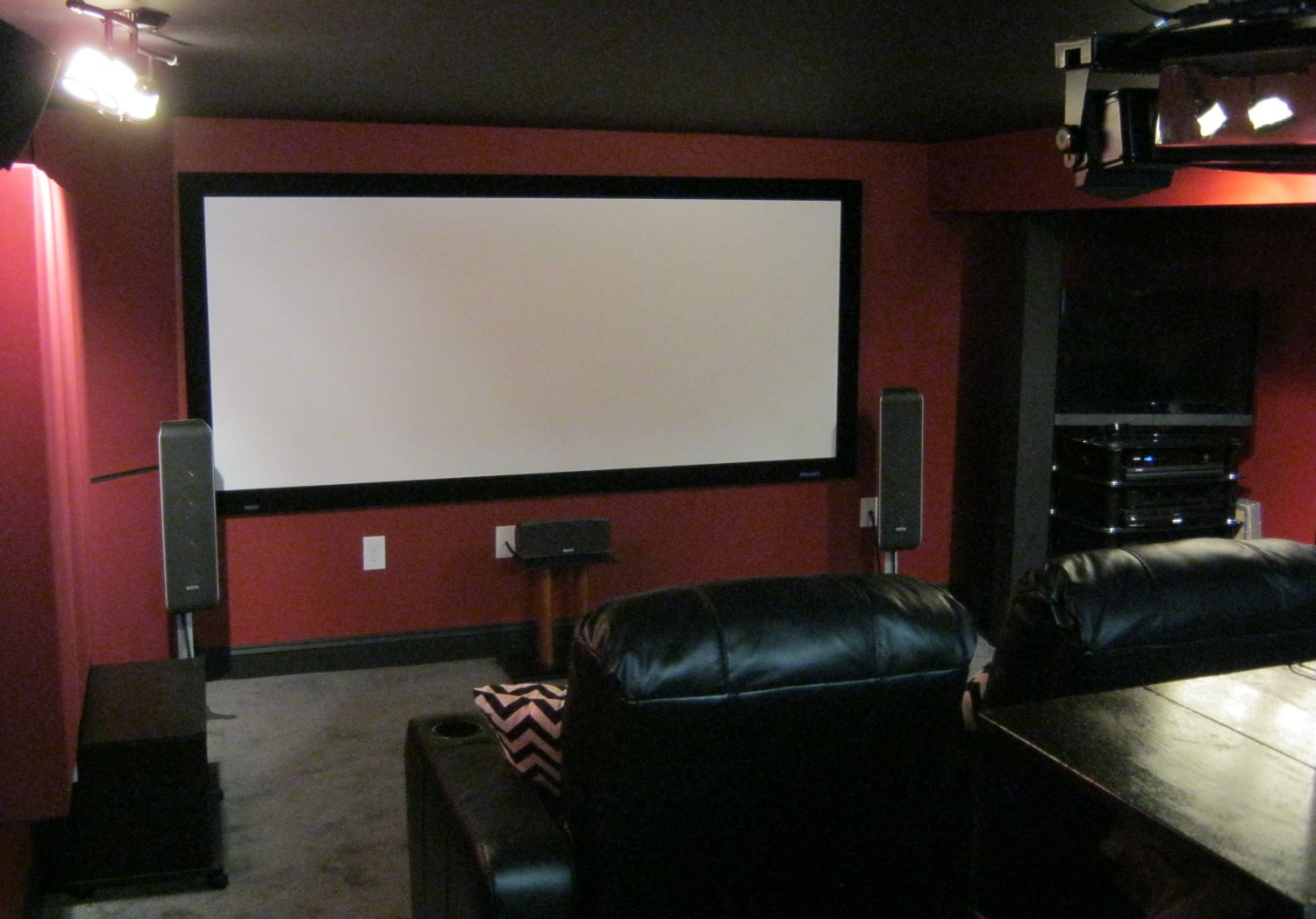 I have now moved up to the MC500, which is significantly larger and more powerful. Just look at how much more space it takes up on that stand, for starters. 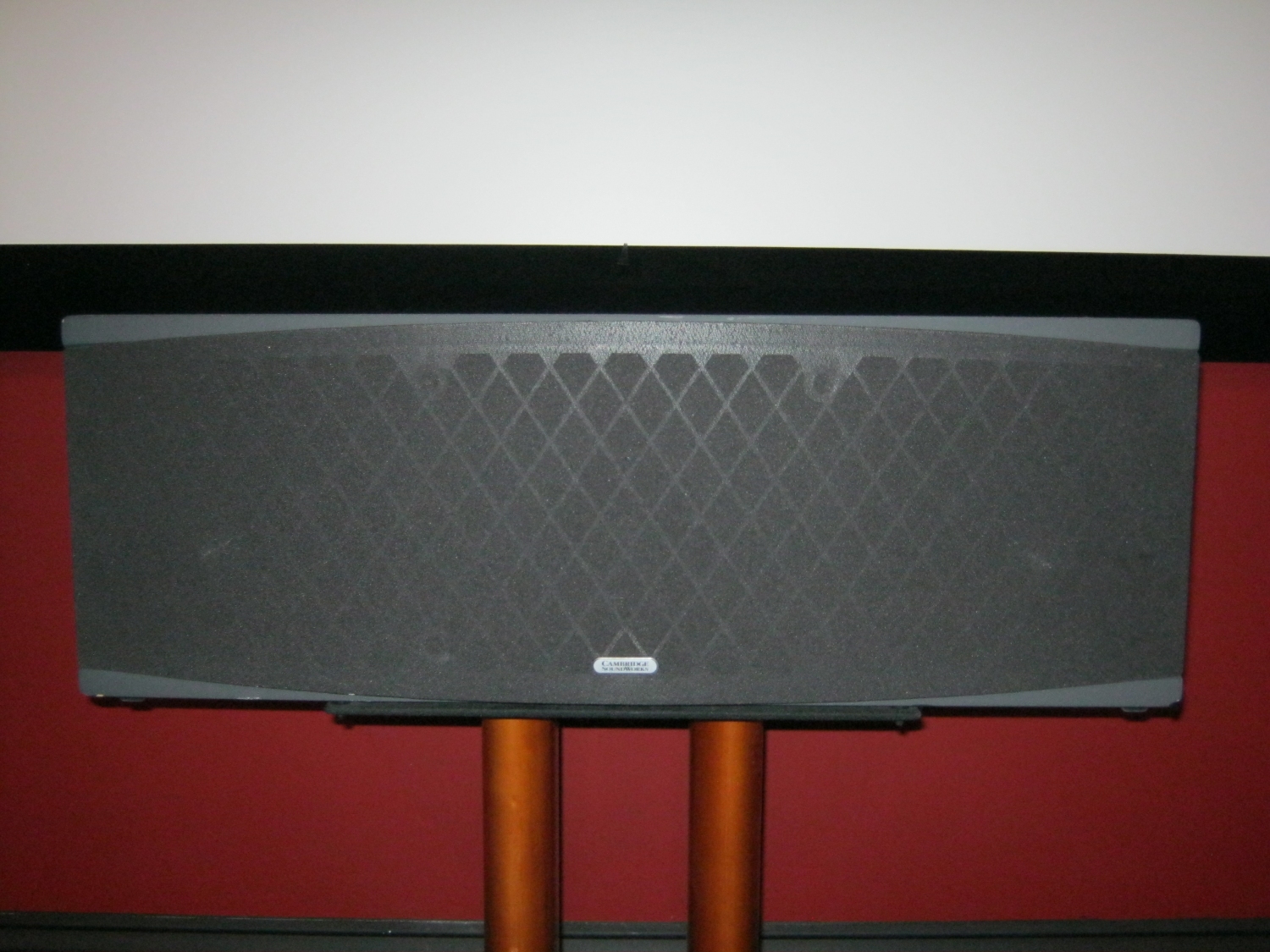 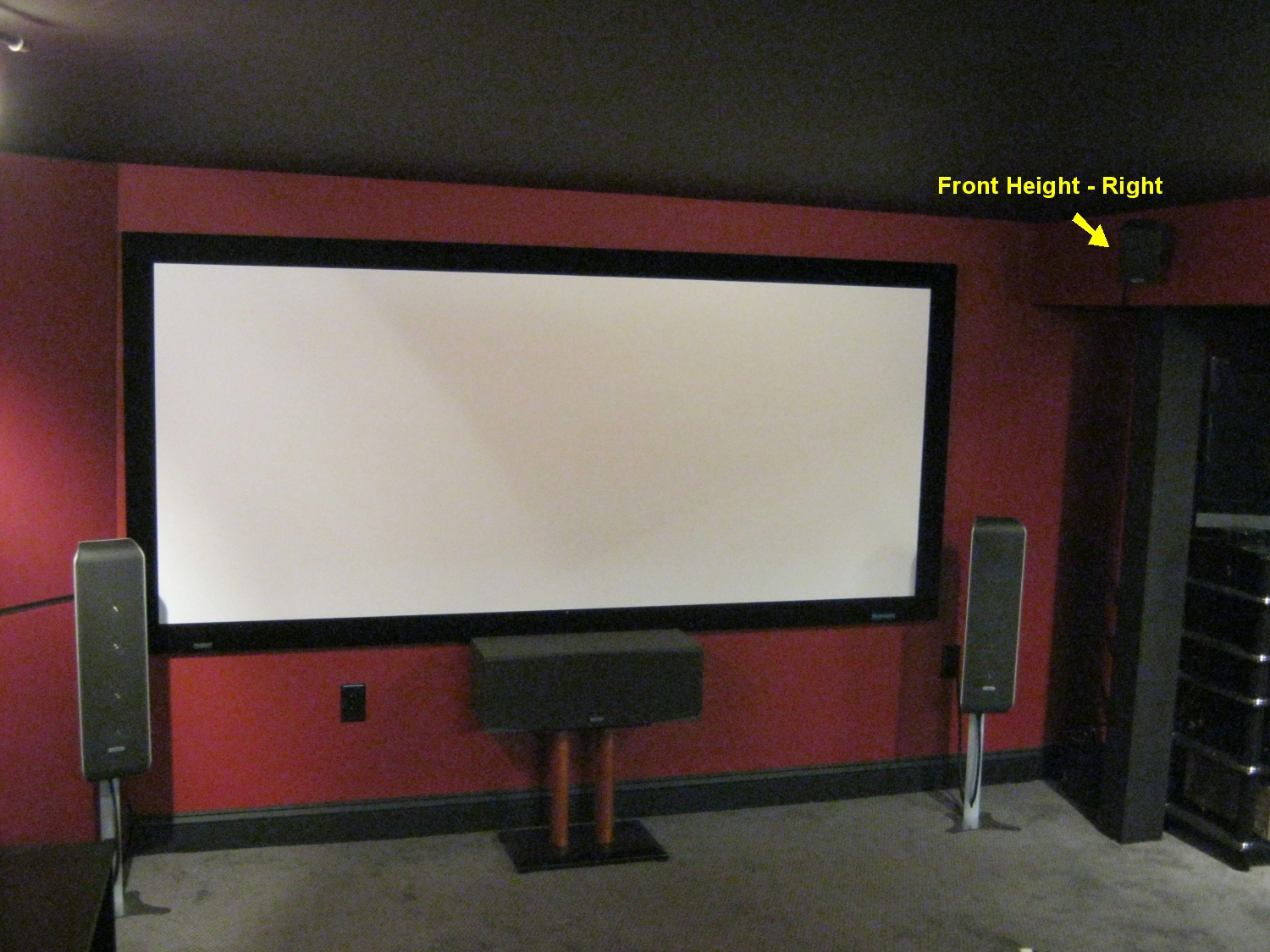 My front soundstage sounds a lot better now, not just for the rare mono movie but for everything I watch. This was a worthy upgrade.

That wasn’t the end of my changes, though. Replacing the center channel then triggered a chain reaction. Because I was left with a spare MC300 speaker that I didn’t want to put to waste, I next hunted down a second MC300 in order to replace my left and right Surround channels (formerly MC200s). I then had to decide what to do with those MC200s, and that was especially complicated.

When I initially installed Atmos, I had to make some compromises in speaker placement due to the way my former 7.1 system had been wired and installed when I built the home theater room. One thing that left me particularly unsatisfied was that my Surround Back channels were mounted to the ceiling in the back of the room. In an ideal Atmos configuration, all 7.1 of the base layer channels should be at or near ear level, whereas I had the Surround Backs on the same plane as the height channels.

Having the other 5.1 speakers at ear level but the Surround Backs up high created an imbalance in the soundstage and a lot of confusion in sound objection directionality. Say you’re watching a movie where the sound of a car zooms from the front of the room to the back. In my system at the time, the car would start at ear level in the front, move to ear level at the sides, and then suddenly shift to up high in the back. While not every movie had problems like this, it was enough of an issue that I wanted to change something.

What I decided to try was a little unconventional. First, I took those spare MC200 speakers and put them on a shelf behind my seats, just slightly above ear level but close enough to being in the same plane as the other 5.1 channels. That sounds simple and logical enough, right? Indeed, it works out much better for me. However, it also means that I had two speakers mounted to the ceiling in the back of the room that weren’t being used.

I now had six speakers mounted either on the ceiling or up high on the side walls: two in the front of the room, two in the middle, and two in the rear. 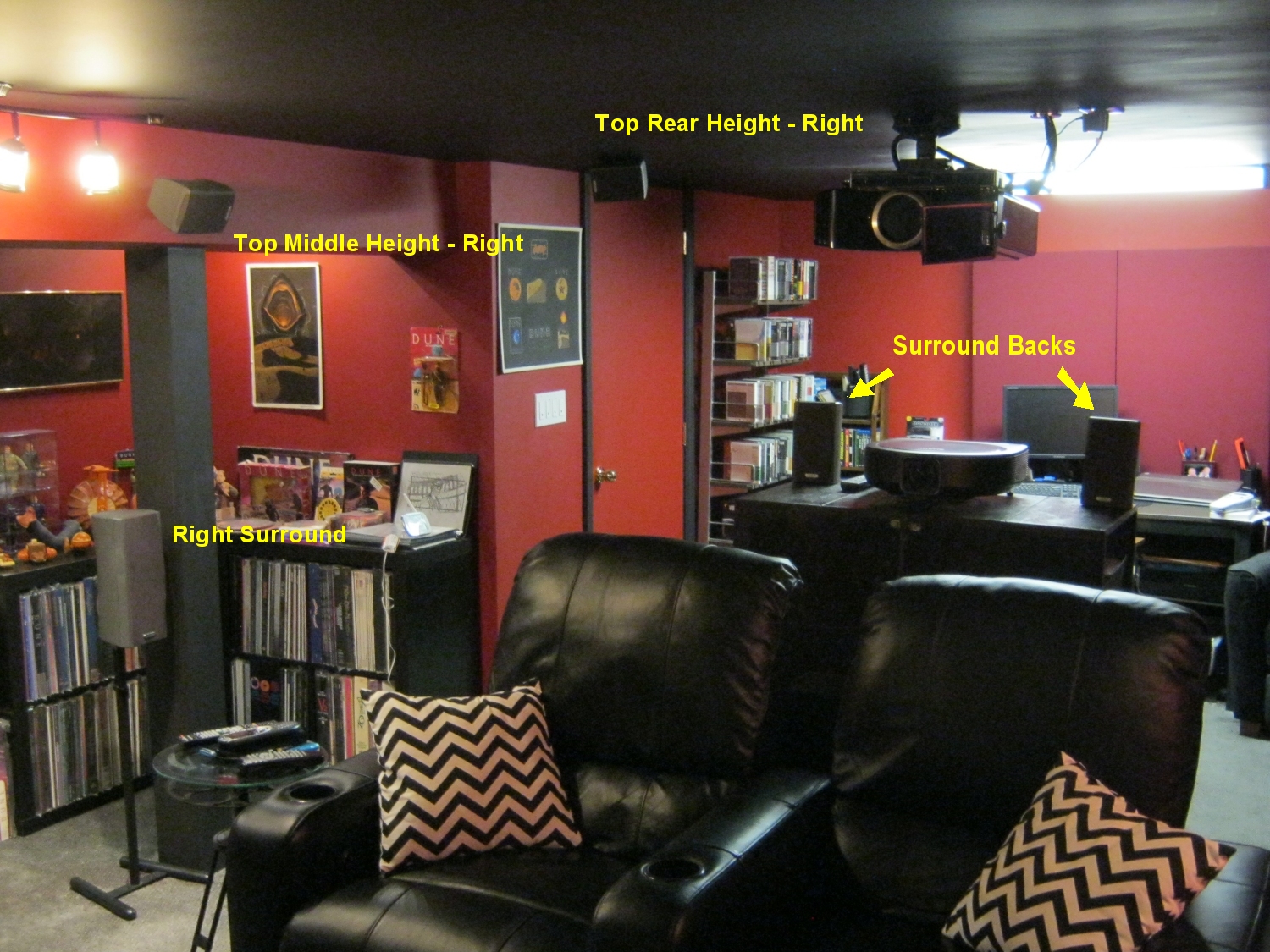 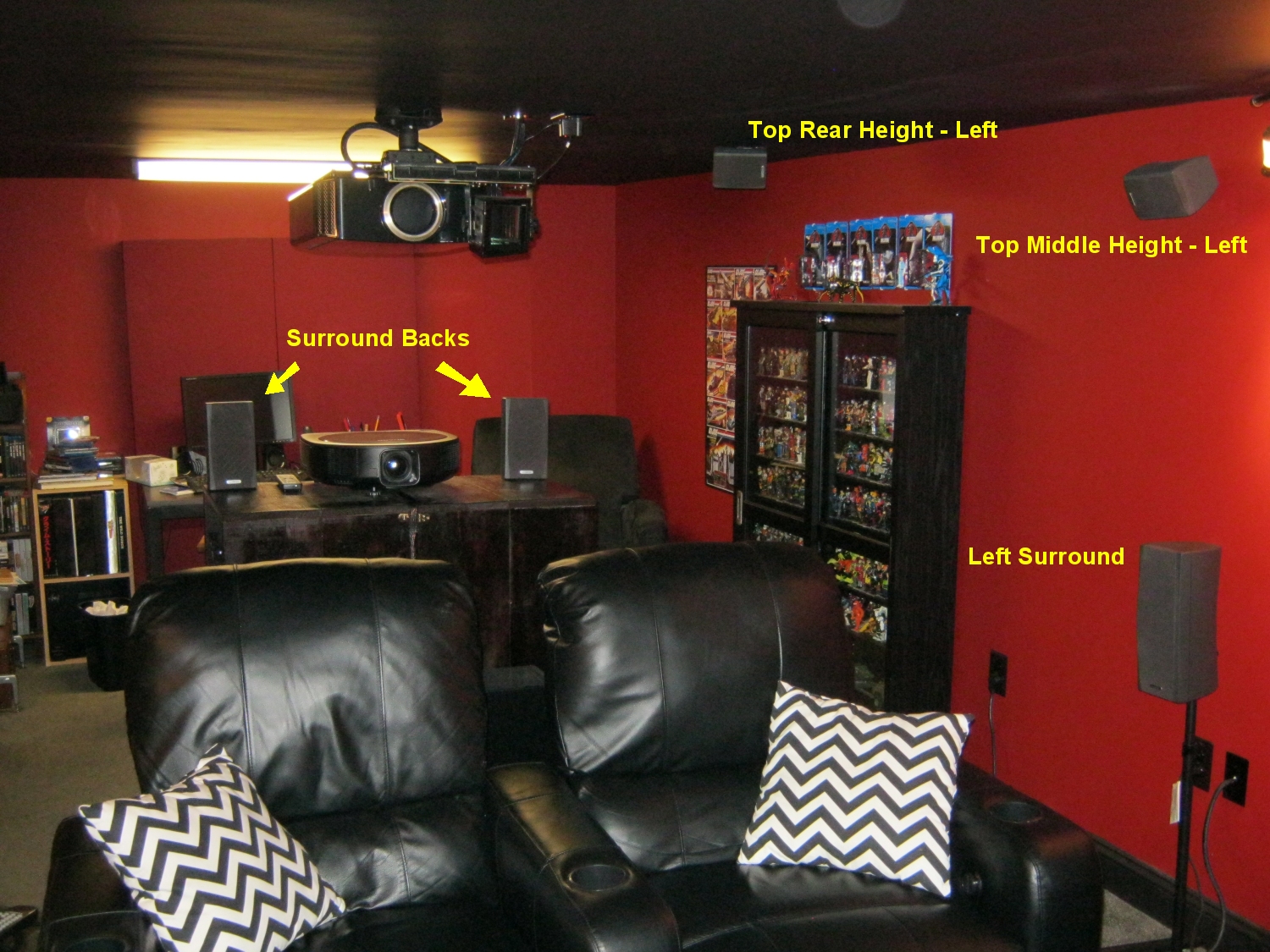 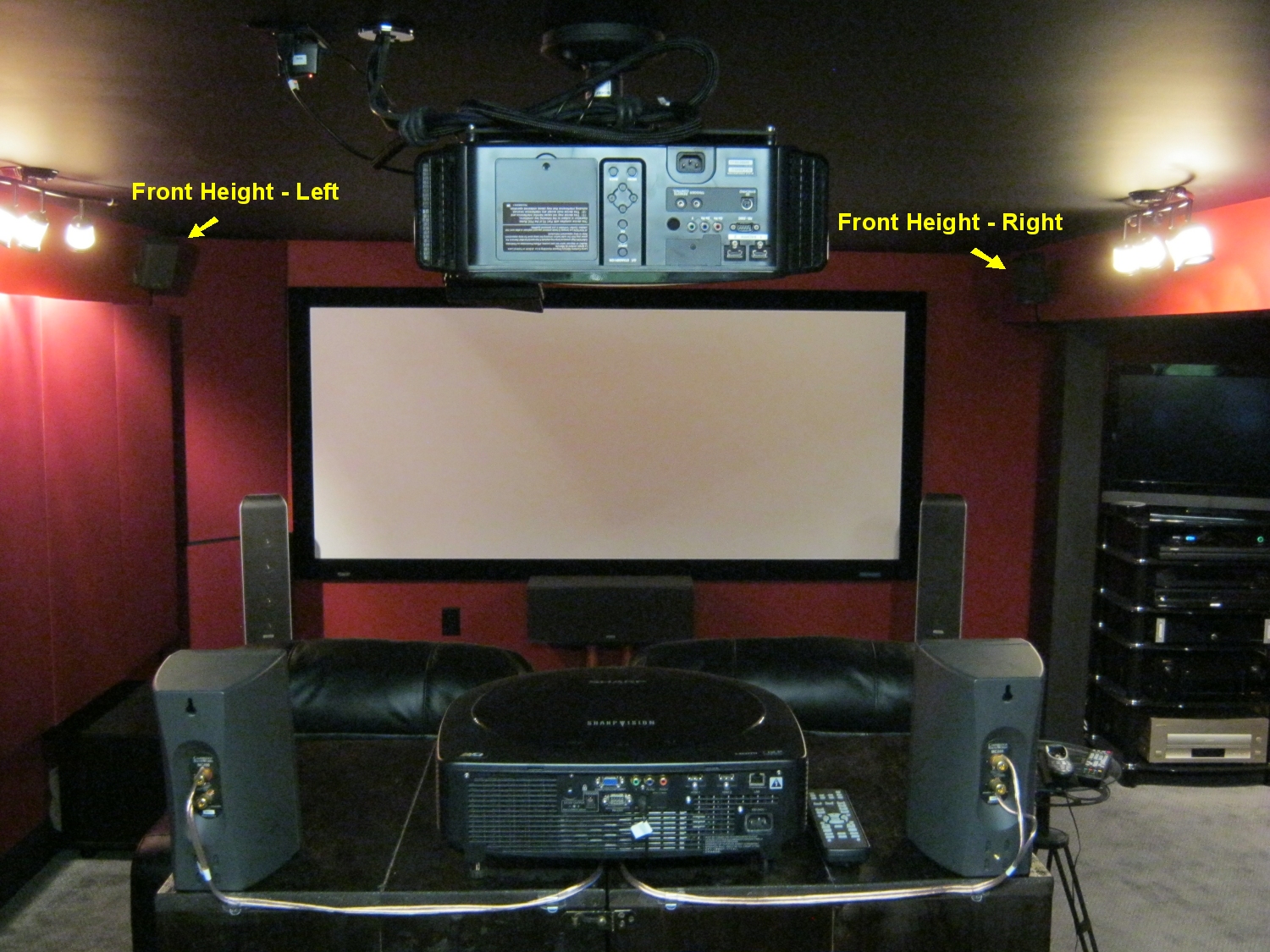 My A/V receiver, the Denon AVR-X5200W, can only decode four height channels, for a maximum system configuration of 7.1.4. Yet I had 13 speakers wired, mounted and installed – enough for 7.1.6.

Currently, only super high-end boutique hardware costing tens of thousands of dollars can decode more than four height channels in Atmos. That was simply out of the question, but I still wanted to find a way to make use of all my speakers and most effectively distribute sound through my room. Otherwise, I’d have to pull down one pair of the speakers (either Top Middle or Top Rear), or simply leave them disconnected, a purely ornamental feature in the room. Not only does that seem wasteful, but it would potentially leave a gap in the upper hemisphere of the room with no sound at all.

Ultimately, I chose to rewire both the Top Middle and Top Rear speakers and connect them in parallel to one set of posts on my amp. Essentially, this forms a small speaker array by cloning one pair of speakers and copying the sound to the other pair as well. The system still only has four discrete height channels of audio, but spread among six speakers. I suppose you might call this a 7.1.4 (2) configuration, if that weren’t such a mouthful.

Doing so left me with a concern about whether cloning one set of speakers would disrupt object directionality in the heights. Would a sound that’s only meant to come from the middle of the room sound weird if it came from both the middle and back simultaneously? I also wasn’t sure whether it would be better to program this new speaker array as Top Middle or Top Rear. Would that matter at all?

To test the new system configuration out, I found a very useful scene in the Atmos Blu-ray of the movie ‘John Wick‘. At approximately time code 1:25:10, the sound of a helicopter pans through the height channels from front left to rear left, and finally over to rear right. I disconnected all of my speakers except the height channels and listened to this scene over and over again, switching between the Top Middle and Top Rear settings in my receiver. What I determined is that there’s effectively no difference between those settings. The movement of the helicopter was identical no matter which I picked. Further, cloning the two pairs of speakers sounds great in my room and doesn’t compromise the object directionality at all that I could tell.

Satisfied with those results, I plugged the rest of my speakers back in and have been watching movies and TV that way ever since. I think they sound terrific. Moving the Surround Back speakers down to the same level as my Front Mains and other Surrounds made a pretty noticeable improvement on its own, and the heights are better distributed as well. If, at some point in the future, I ever upgrade to another A/V receiver that can decode six height channels, my speakers are in position and wired up, and can be easily connected that way.

My only disappointment is that I was forced to put the Top Middle set of speakers high on the side walls rather than on the ceiling. (Those had previously been my main Surrounds. They were already wired and mounted in place, and can’t be moved now.) I fear that I don’t have enough distance between those speakers and the new Surrounds below them, and that I’m left with a gap directly above my head. As a result, that helicopter pan seemed to bounce from one side of the room to the other, and a later rainstorm scene in the movie sounded like it was falling in a ring around me, but not on top of me.

That’s a compromise I had no choice but to make due to the circumstances of how the room had originally been built. It’s not ideal, but fortunately it’s rarely problematic in practice. I can live it it. Overall, my home theater sounds better than it ever has before. I’m very pleased with the Atmos investment and the new speaker arrangement.

Am I done yet? Probably not. I’ve lately been monitoring Craigslist for a good deal on a pair of nicer tower speakers for my front Left and Right mains, which would probably also mean swapping around some of the other speakers (my old Left/Right mains moving to the Surrounds, those Surrounds moving to Surround Back, etc.). Once this upgrade itch gets started, it takes a lot to scratch it.