Aside from some obscenely expensive high-end boutique gear, the current generation of Dolby Atmos A/V receivers (as well as the coming wave of DTS:X capable models) top out at a maximum limit of 7.1.4 channels of surround sound audio. While that should be plenty enough for the majority of home theater users, some may find a need to add even more speakers to a room. In order to do that, you need to get creative. The following is one solution I’ve implemented.

My transition to Dolby Atmos did not go as smoothly as I would have liked, through no fault of the format itself. Many of my decisions for speaker layout were dictated by mistakes I had made in the past. When I originally built my home theater room, I only wired for a 7.1 configuration. My left and right Surround channels as well as my two Surround Backs were all mounted up high on the side walls or on the ceiling, as was common practice before object-based audio was available for home use. This presented a problem, in that I had nowhere higher to go in order to add height channels for Atmos.

As a result, what I had to do was add new speakers on stands at ear level, which became my new Surrounds. I then rewired the original mounted speaker locations to become height channels. Yet my old Surround Backs were still mounted to the ceiling, far above the ear-level plane where they should have been. 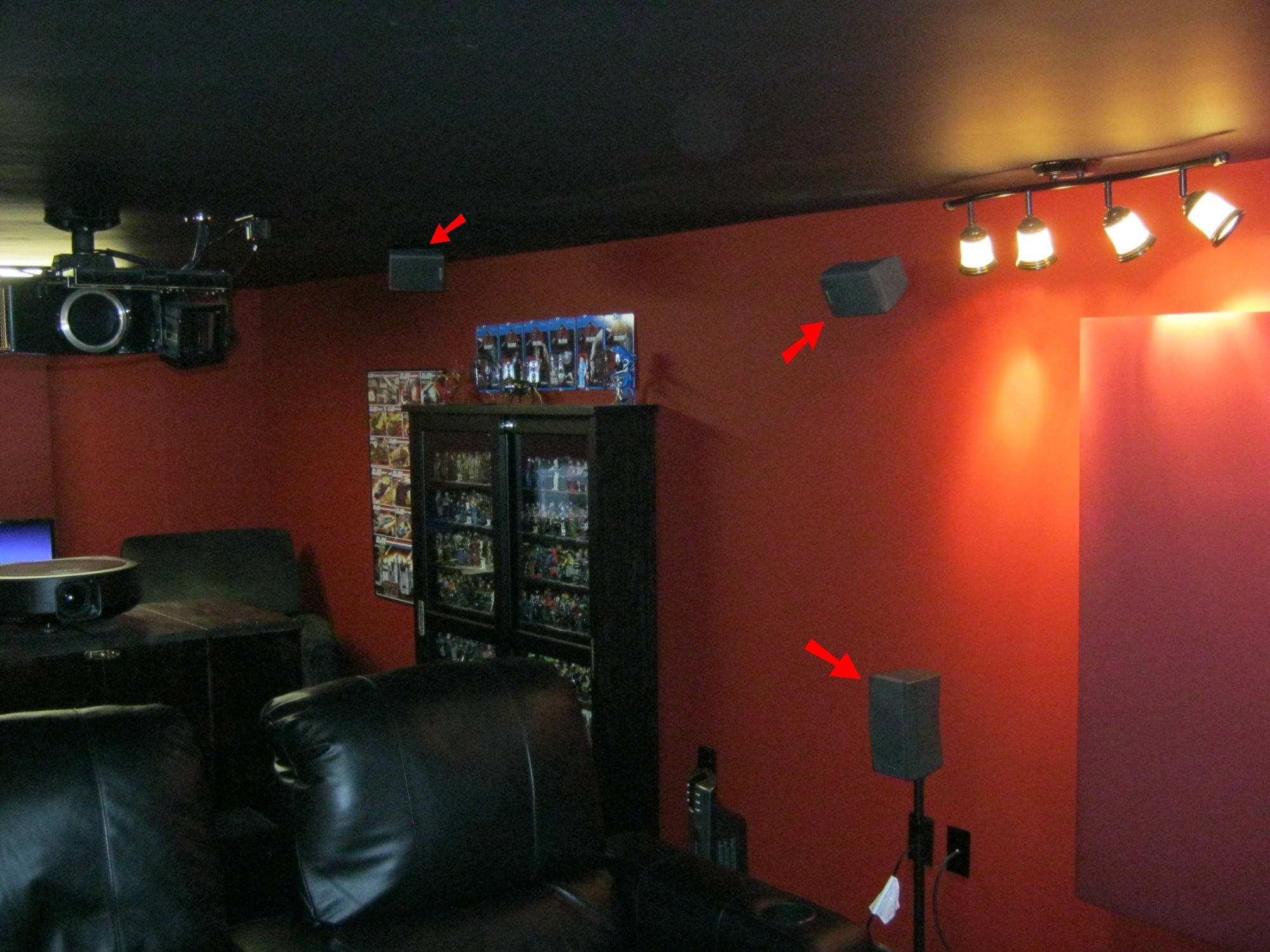 Although this was a pretty effective way of adding Atmos to the room, it wasn’t ideal. For one thing, the former Surround speaker positions (now designated as Top Middle) were spread too far to the sides of my listening seat, which left a big hole in the soundstage directly above me. One of my favorite Atmos Blu-rays (‘John Wick‘) has a scene at the climax that involves a lot of rain falling from above. In my room, it sounded like the rain was falling in a big ring around me but not actually over my head, and a helicopter that flew across the room seemed to jump from one side to the other with a gap in between. I needed a solution to plug holes in the soundstage like that.

Essentially, I have filled my room with as many speakers as I could cram into it. At present count, I’m using 15 active speakers (plus a subwoofer) in a 7.1.7 configuration. (Yes, I realize that 7 + 7 = 14. Bear with me.) I have half-jokingly decided to call this the “Zatmos” system.

This consists of 7.1 speakers on the ground, 2 Front Heights, 2 Top Middles, 2 Top Rears, and 2 speakers installed directly over my seats that are ganged together into a Voice-of-God array.

If my HTML on this page is working correctly, you should be able to roll over these photos with your mouse, or click to enlarge, to see all the speakers labeled. 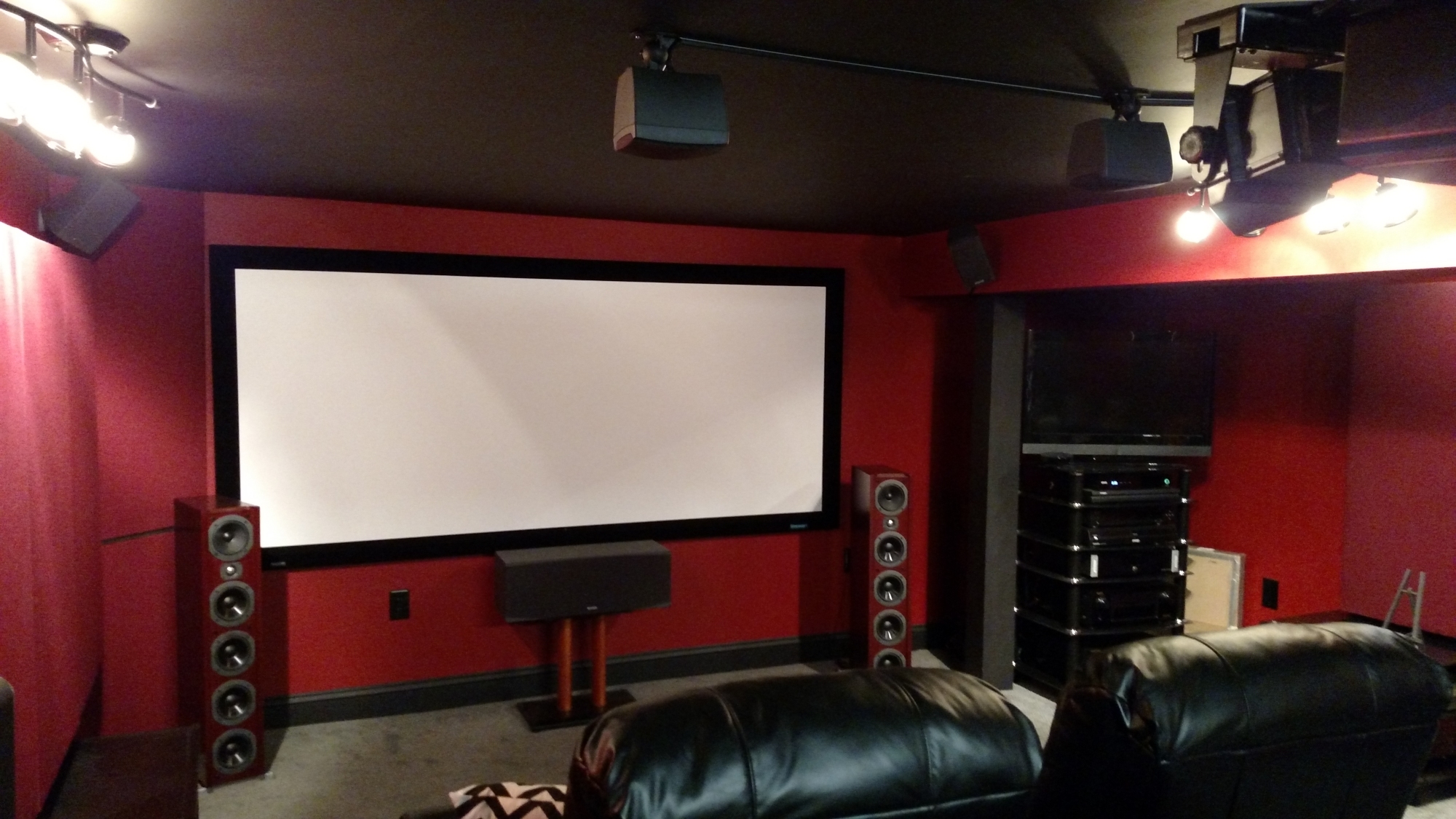 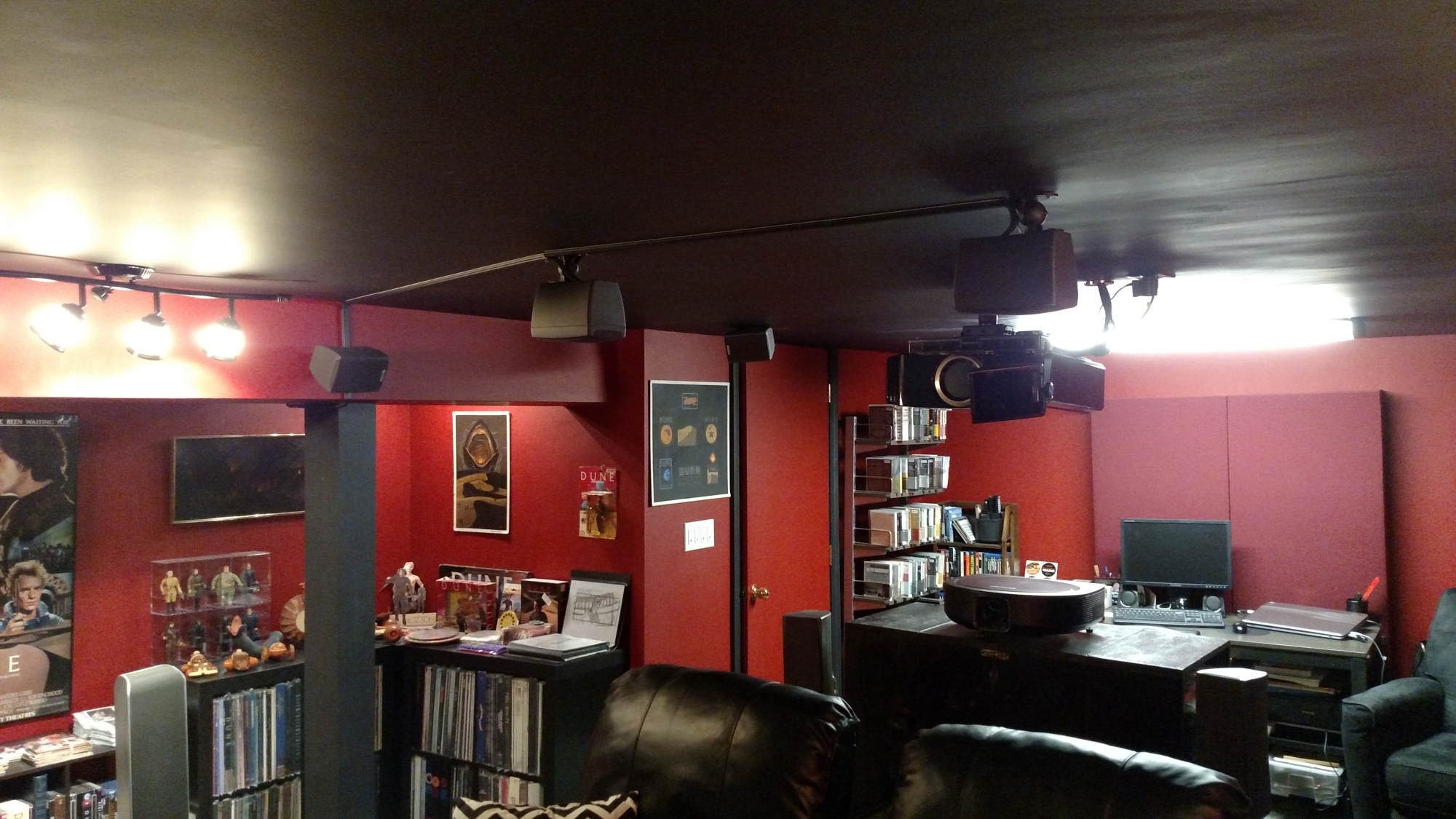 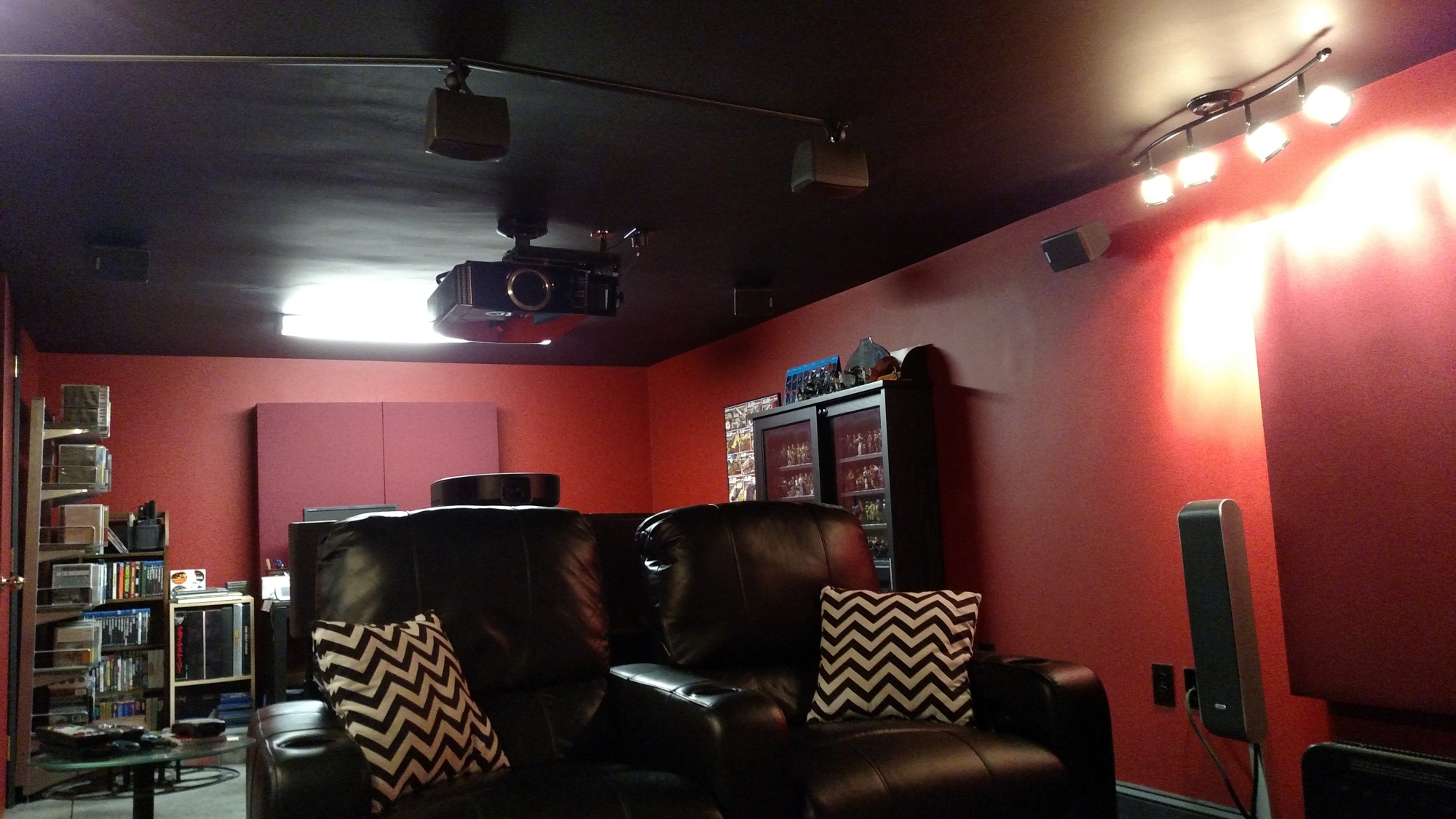 In order to drive this many channels, I need to simultaneously run two home theater A/V receivers. The primary unit is a Denon AVR-X5200W Atmos model. The second is an older Marantz receiver (SR4400) that I picked up off Craigslist for a song. 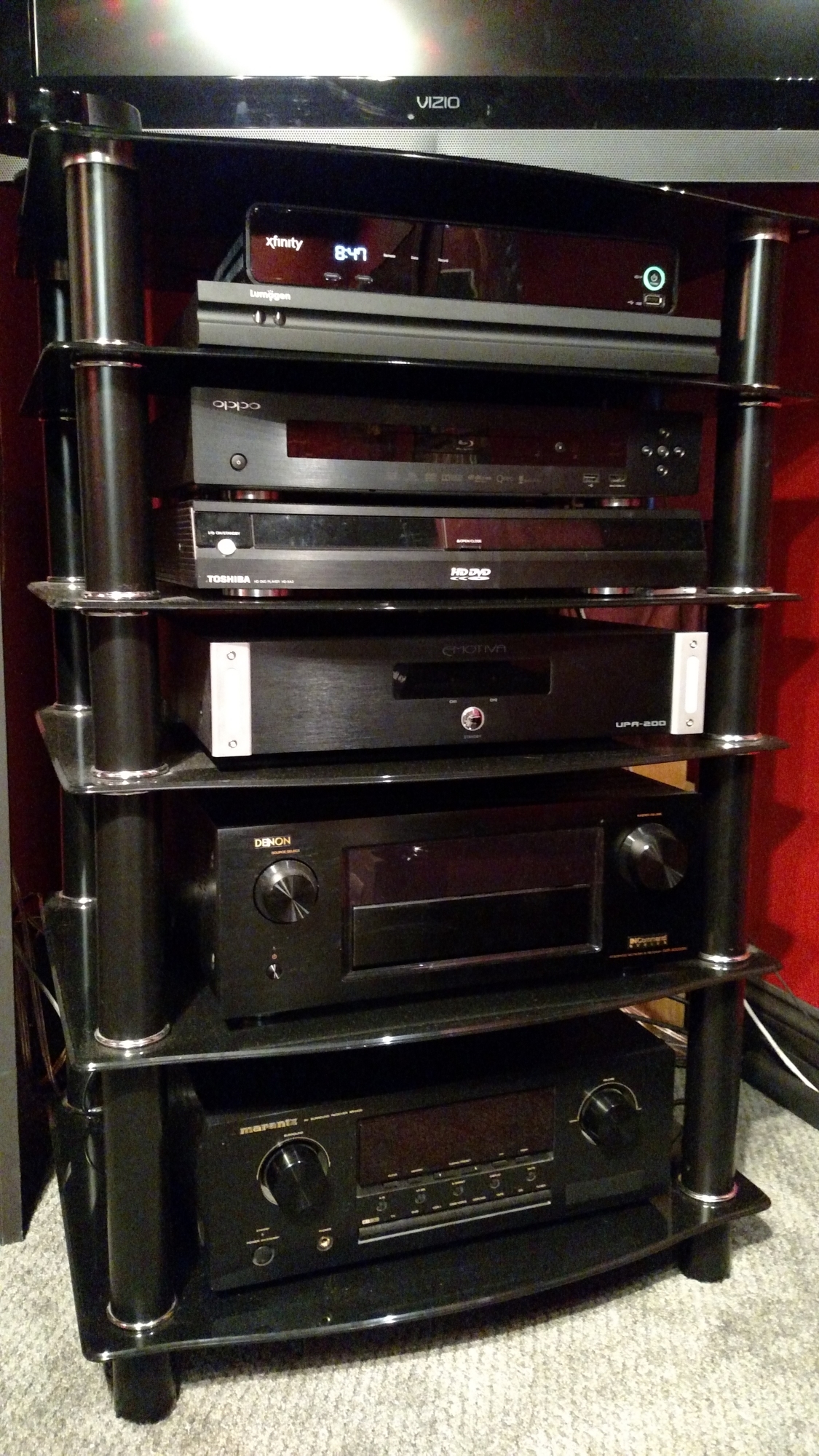 The second unit does not need to be Atmos capable. In fact, the one I bought is from 2003. It doesn’t need to be anything fancy or powerful. It doesn’t even need to have HDMI inputs. All that’s required is that the second receiver must be at least a 5.1 model and must have Dolby Pro Logic II decoding.

My primary Denon Atmos receiver can decode 7.1.4 channels of sound. This receiver will drive 9 of those channels itself: the 7.1 on the ground and the 2 Front Heights. (Technically, I have an Emotiva amp powering my main tower speakers, but that’s not relevant to this discussion.) That leaves the 2 remaining height channels, which I’ve programmed as Top Middle.

On the back panel of my Atmos receiver, I’ve connected the analog pre-outs for the second pair of height speakers to a set of stereo inputs on the second receiver.

Here’s how messy the back of my equipment rack looks with everything connected: 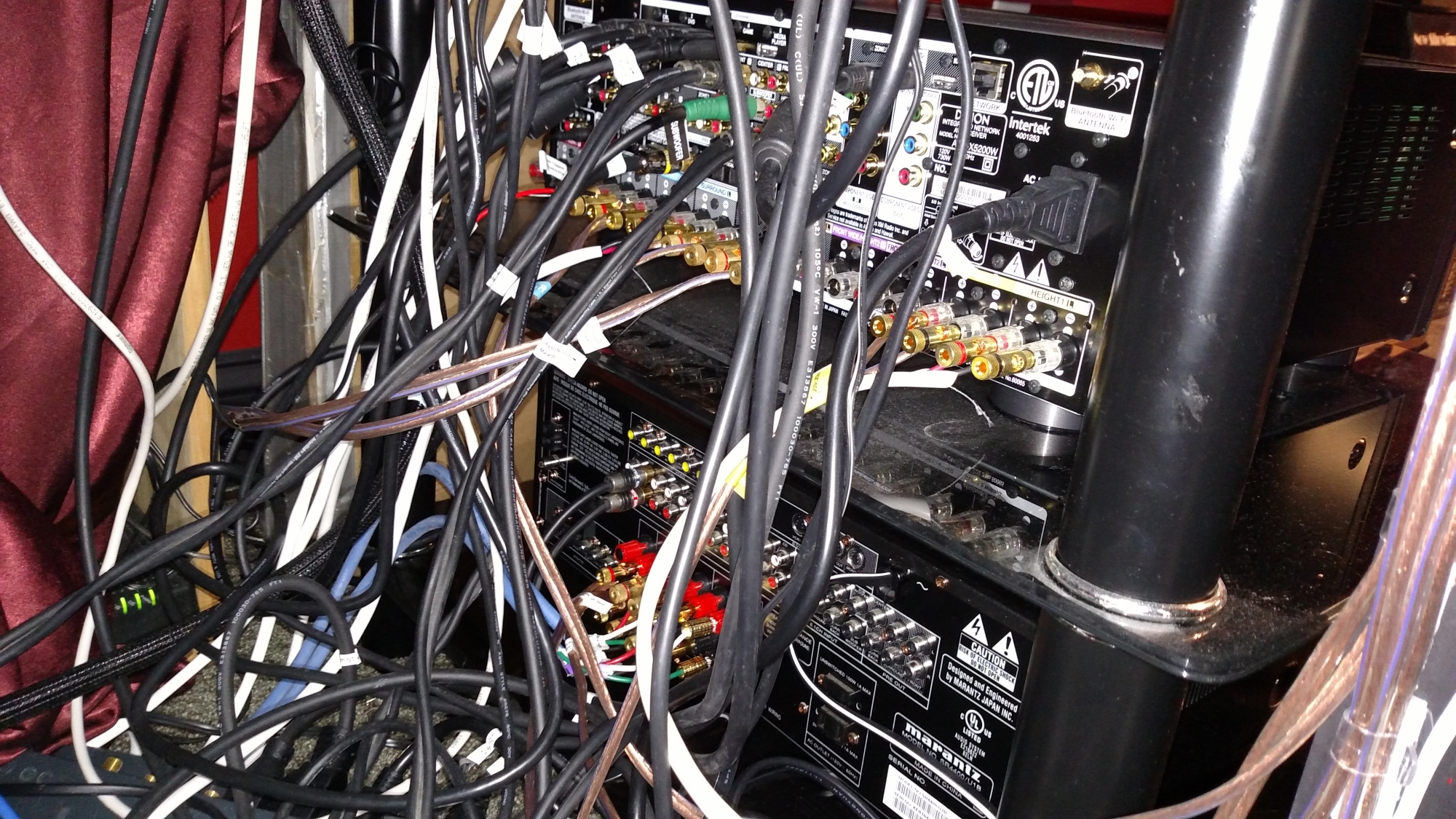 The second receiver is then configured for 5.0 channels of sound, with all speakers set to Large and no bass crossover. Any room correction or other processing should be turned off, except for channel volumes, which can be measured manually using a sound level meter.

When the second (Marantz) receiver is fed an input signal from the pre-outs on the first (Denon) receiver, it treats that as stereo left and right content that gets directed to the Top Middle speakers on the sides of my room. By turning on Dolby Pro Logic II Cinema decoding, I can then create a matrixed center channel between them (my Voice-of-God array over my seats) and two additional matrixed surround channels (my Top Rear speakers in the back of the room). 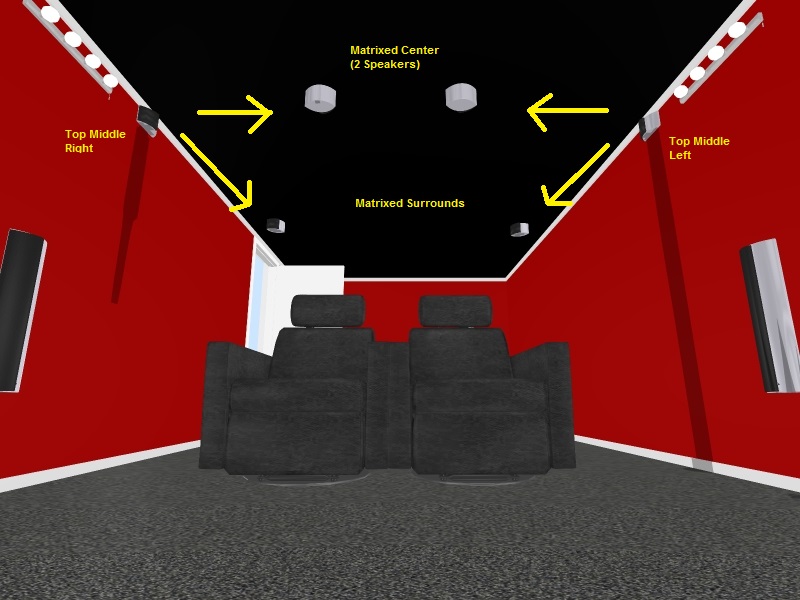 Effectively, I’ve connected two separate surround sound grids in my room: 7.1.2 for all the ear-level speakers and the Front Heights, plus an additional 5.0 system above and behind me.

As far as my reasoning went, the theory behind this seemed logical enough. However, I still worried about how movie soundtracks would actually sound in practice. Would any audio really matrix to the VOG position, or would these two new speakers I mounted be useless? Conversely, would too much audio collapse to the VOG position and leave the Top Middles empty? Would the sound objects in an Atmos soundtrack that get sent to the Top Middle channels contain enough directional cues for Pro Logic II to pull anything useful to the Top Rears?

To test some of these scenarios out, I cued up my favorite scene from ‘John Wick’, at approximately 1:25:00. I then disconnected all of my speakers except the eight heights, so that I could isolate and listen carefully to exactly what’s happening at the top of my room.

This scene in the movie is ideal for testing, because it has helicopters circling overhead as well as a lot of other directional activity that bleeds into the heights. For example, at one point a car races from room front to room back, and that sound is present in both the heights and ground level. I stood halfway between the Top Middle speakers and Top Rear speakers as I replayed the scene. What I heard was the sound of the car decidedly panning from Top Front to Top Middle to Top Rear. The Pro Logic II matrixing worked exactly as I’d hoped!

The helicopter in the scene moves across the room from front-left to middle-left to middle-right. That sound panned through the VOG speakers when PLII matrixed a center between the Top Middles: TML->VOG->TMR. Reverberations from the chopper reflected in the Top Rears as well. A few minutes later into the scene, rain starts falling. I could hear that from the Voice-of-God speakers as well as the Top Middle speakers to the sides and the Top Rears behind. Pro Logic II spread out the rain sound without noticeably harming the original Top Middle signal.

So far so good! True, discrete sound effects going to the Top Rears or Voice-of-God will probably be rare. Mostly, what will get pulled to those speakers are ambient tones and noises. Even when directional effects do go to the Top Rear speakers, it will be hard to discern that movement from my seated listening position, simply because human hearing is very poor with sounds behind us.

Nevertheless, the system works. With all 15 of the speakers in my room connected up again, Dolby Atmos creates a more enveloping bubble of sound around my listening position than ever before.

With all that said, I’m not 100% certain that this configuration will work for all content. Although I feel pretty confident that native Dolby Atmos (or, eventually, DTS:X) soundtracks will adapt well to this additional processing, I’m not as sure about 5.1 or 7.1 soundtracks that go through the Dolby Surround Upmixer in the Denon receiver. I’m wary about processing the signal twice with two different decoders, especially for any music that gets expanded upwards to the height channels. Will that sound weird? Will specific instruments or notes seem to come from odd places in the room?

I need to listen to a lot more content before I can make that determination. So far, most of the activity that DSU pulls upward to the height channels is diffuse enough that I haven’t noticed anything untoward happening. However, I will listen attentively for these issues in the future.

Fortunately, even if I decide that I hate this additional Pro Logic II processing and don’t want to use it anymore, I can turn that off and still make use of the extra speakers. I’ll simply need to rewire the back of my equipment rack to pair the speakers together into arrays on the left and right sides of the room that clone the Top Middle signals sent there without any matrix decoding. That should not be too difficult to do if I find it necessary.

My Zatmos configuration is not necessarily the only way to add more speakers to a Dolby Atmos system. In fact, some of the choices I’ve made were necessitated by my previous sub-optimal speaker positions. Someone who has installed height speakers closer to Dolby’s recommended guidelines may not have the same need for extra matrixed channels as I do, or at least not channels matrixed the same way mine are.

For example, over at AVSForum, a member has discussed his plans to utilize three A/V receivers – one Atmos model and two Pro Logic II models. The PLII units will be configured on the left and right sides of his room respectively, each connected to a discrete Top Front speaker and a discrete Top Rear speaker, from which it will matrix a Top Middle between them. Another member plans to create a matrixed center between his two Top Front speakers.

Other alternatives are also possible. Whether you consider any of them practical or necessary will of course be a matter of personal opinion, but I feel satisfied so far that the effort I’ve put in is already making a noticeable improvement in the sound quality of my home theater room.

[Update: Since writing this article, I have rewired and reworked my Atmos configuration to better results. You can learn more about that in my follow-up articles, starting at Beyond Dolby Atmos 7.1.4, Part 1.]