In my Constant Image Height Refresher article the other day, I made a brief reference to the distinction between “2.35:1” and “2.40:1,” the two aspect ratio terms commonly used to describe “scope” widescreen movies. I didn’t have the time or space there to explain the actual difference between the two, or the mathematically-illogical reason that these two numbers somehow equal the same thing. To do so, it will help to take a brief look back at the history of widescreen cinema.

In the earliest days of silent film, movies didn’t have a standardized aspect ratio, but were generally squarish in shape. A number of variances proliferated among a host of proprietary camera and projector formats. Once filmmakers started to form a genuine industry around their work, the first standardized ratio for silent movies was set at four sprocket perforations of height on a 35mm-wide strip of film. The usable image area between the perforations was 24.89mm x 18.67mm, for a ratio of 1.33:1 (also expressed as 4:3).

Upon the introduction of “talkies,” the amount of space that the photographed image took up on a film print was reduced in size to 22mm x 16mm in order to squeeze an optical soundtrack along the edge of the print. This left the picture with an aspect ratio of 1.37:1. As defined by the Academy of Motion Picture Arts and Sciences, this became known as the “Academy Ratio,” and remained the standard for motion picture photography and theatrical projection until the early 1950s.

When television came along, it mimicked the movies with a ratio of 1.33:1. Yes, technically, that was the silent film ratio, but the visible difference between 1.33:1 and 1.37:1 was so small that hardly anyone noticed, especially not after the significant amount of overscan that all consumer televisions suffered from until the recent HDTV era anyway. All things considered, Academy Ratio movies and TV screens made a good fit for one another.

Filmmakers being creative people, some experimented with different screen shapes despite the industry’s standardization. As early as 1927, Abel Gance shot portions of his epic ‘Napoleon’ with the intention of projecting three strips of 35mm film side-by-side, for a ratio of approximately 4:1.

By the 1950s, competition from television drove the film industry to move away from Academy Ratio in favor of new, wider screen sizes in order to give audiences a larger, grander experience than they could get at home. Since human peripheral vision sees more on the left and right than on the top and bottom, a wider frame allowed movies to become more immersive, especially on very large theater screens.

The widest of the new formats was CinemaScope, developed by 20th Century Fox, which worked by placing an anamorphic lens with a 2:1 horizontal squeeze in front of the camera lens. This compressed a wider image onto the same space on a film negative that a traditional Academy Ratio movie used. Naturally, if you tried to project that without correction, the picture would suffer severe geometrical distortion. To restore the proper proportions, theater projectors were equipped with anamorphic lenses that had an opposite 2:1 horizontal stretch. Thus, the movie image would have the same height as an Academy Ratio movie, but was twice as wide.

Early experiments with CinemaScope yielded a photographed ratio of 2.66:1. However, in order to add an optical soundtrack to the film prints, that ratio was reduced to 2.55:1 by the time of the format’s debut in 1953 with Fox’s release of the Biblical epic ‘The Robe‘.

CinemaScope was sensationally popular. Audiences fell in love with the bigger, wider images on theater screens. Many more movies were rushed into production using the format, and other major film studios licensed the process from Fox for their own movies.

A couple years later, CinemaScope reduced the ratio slightly to 2.35:1 in order to fit an additional audio track onto the film prints for stereophonic sound. This became the new standard for “scope” widescreen photography, and was imitated by competitor products and knock-offs such as Euroscope (used in Europe, obviously) and Toho Scope (from Japan).

Eventually, the industry settled into employing two different standards that have remained to this day, one for scope movies (the focus of this article) and another for “flat” widescreen pictures photographed with spherical lenses (no anamorphic stretch) and matted on the top and bottom to a ratio of 1.85:1. The 1980s and 1990s saw the rise of the Super 35 format, which allowed filmmakers to compose for a scope ratio using spherical lenses and matting. Modern digital photography and projection have adhered to the same aspect ratio standards as their 35mm predecessors.

Fox’s CinemaScope itself didn’t actually last very long. The format suffered an optical flaw in its lenses that caused objects close to the lens to appear stretched differently than objects further away. This artifact was known as the “mumps,” and often resulted in close-up shots that overstretched actors’ faces. Rival firm Panavision developed superior lenses that corrected this problem. As a result, CinemaScope fell into rapid decline and Panavision rose to prominence with pretty much every studio other than Fox. By the late 1960s, even Fox was forced to abandon CinemaScope. Its final productions were the James Bond spoof ‘In Like Flint‘ and the Doris Day vehicle ‘Caprice’, both in 1967. Nevertheless, the term “scope” had become so popularized that it has stuck around ever since, applied to all anamorphic, Super 35 or digital photography that employs a similar aspect ratio.

At first, Panavision’s anamorphic process adopted the same 2.35:1 standard as CinemaScope. However, in 1970, the company slightly reduced the height of the image frame in order to mask a flashing artifact that sometimes appeared at the top and bottom of theater screens during splices. This resulted in a new aspect ratio of 2.39:1. Technically, it was 2.3942:1, which was later amended further to 2.3912 (and some change). Pretty much everyone rounds both of these numbers to 2.40:1. Whether you want to call it “2.39:1” or “2.40:1,” this new ratio has been the official standard for scope photography for over four decades now. All anamorphic, Super 35 or digital scope movies made since 1970 have been composed for and projected at 2.39:1/2.40:1.

And yet, many people in the industry continue to use the term “2.35:1” out of habit to this day, even though that actual ratio hasn’t been used in decades. What you have to keep in mind is that most filmmakers are creative people, not technical people. While cinematographers and camera technicians may speak in precise, accurate numbers, many producers and directors just like the sound of “2.35,” as do film critics and layman viewers.

What We See on Home Video

Did you really think it would be that simple?

The plain fact of the matter is that, honestly, you never know what you’ll get. There is no practical standard for how scope movies are transferred to video. The precise ratio of a video transfer will depend on the calibration of the specific telecine machine used for the film scan. Sometimes you’ll get an accurate 2.40:1. Sometimes it will be set for 2.35:1. If the latter, that may mean that either picture was cropped off the sides, or that (if a Super 35 production) mattes were lifted to expose slightly more picture on the top and bottom.

Some studios, such as Sony or Warner Bros., are usually pretty good about preserving the precise 2.40:1 aspect ratio of modern movies. Others, like Fox, may be hit-or-miss from title to title, even on recently produced films.

The only thing that’s certain is that you should never rely on the disc packaging to provide accurate aspect ratio information if this distinction is important to you. The technical specs printed on DVD and Blu-ray case art are written by the studio’s marketing department based on boilerplate templates, not by technicians who have actually measured the active pixel count or screen area. Further, unfortunately, you probably shouldn’t trust most published DVD or Blu-ray reviews, unless the reviewer is known to be a Constant Image Height viewer. The difference between 2.35:1 and 2.40:1 is so small that it’s not very noticeable on a standard 16:9 HDTV or projection screen with letterbox bars, and most reviewers will just copy the aspect ratio specs from the packaging (which, as I said, are rarely accurate) unless they have a reason to go out of their way and measure.

What This Means for Constant Image Height Projection

For most viewers, this difference between “2.35:1” and “2.40:1” is largely a matter of semantics. Both ratios will look nearly indistinguishable on the majority of home theater screens. Honestly, do you see much difference between the following two images? The top is from ‘Licence to Kill‘, transferred to Blu-ray at 2.35:1, and the bottom is ‘Skyfall‘ at 2.40:1. (Click either to enlarge.) 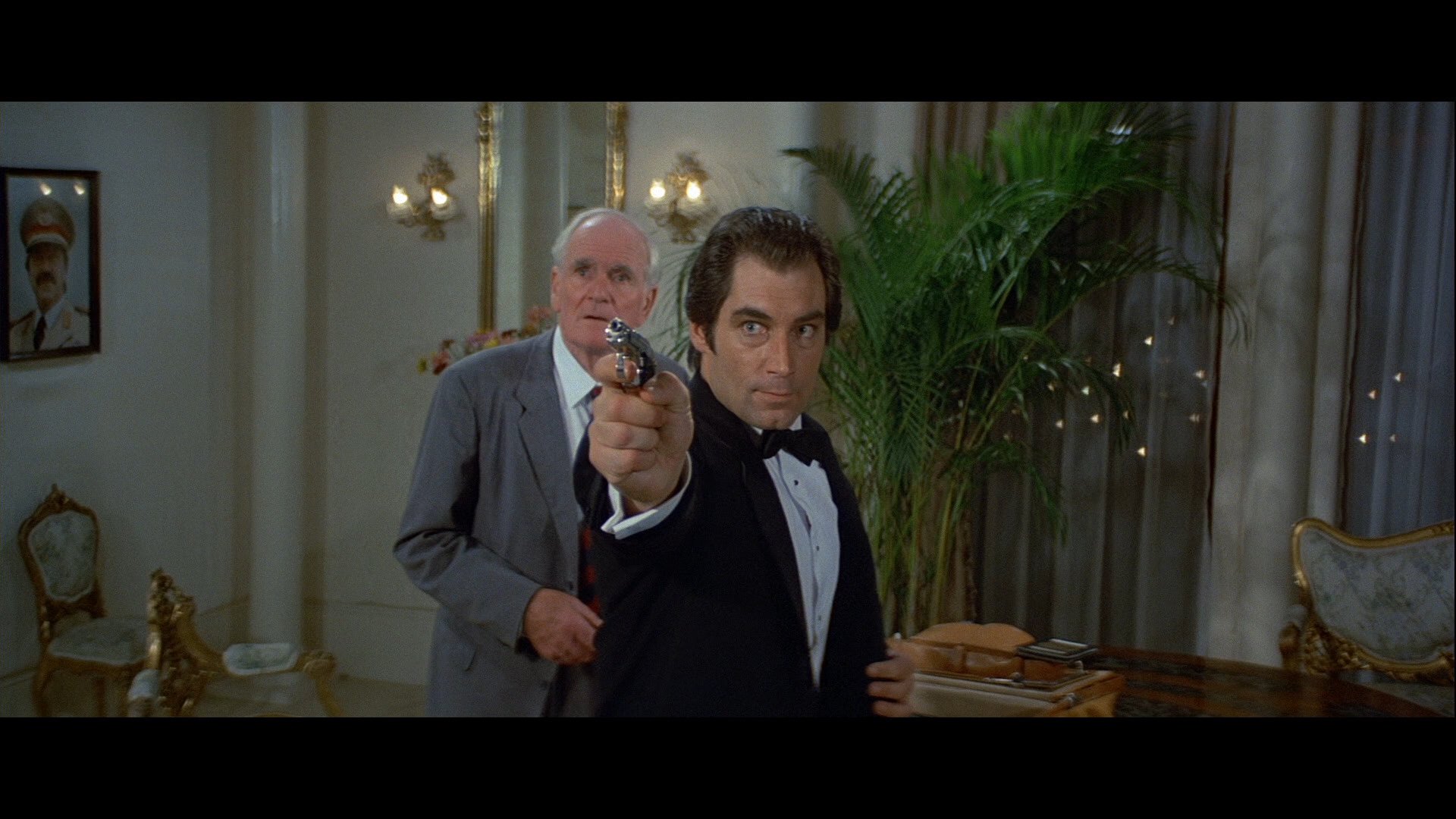 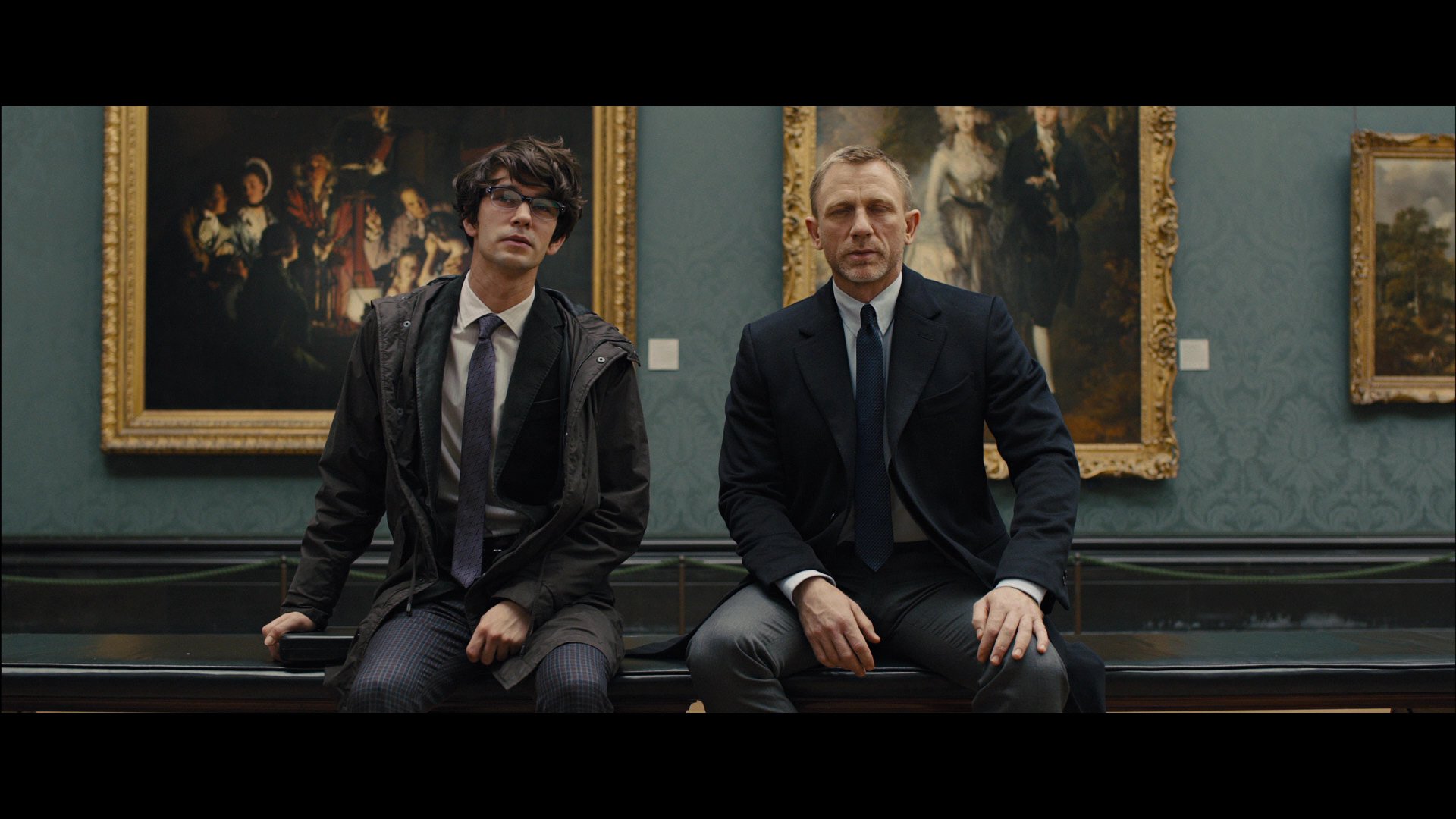 When I point out to you that the aspect ratios are different, you may be able to see it by looking closely. However, if you weren’t told in advance, it probably wouldn’t cross your mind.

This issue is really only a concern to the niche of viewers interested in Constant Image Height projection, for whom even small letterbox bars will be visible around the edges of their projection screens. To that end, a common question among new CIH users is whether they should install 2.35:1 or 2.40:1 screens in their home theaters. All I can advise on that front is that it will come down to personal preference.

No matter which screen ratio you chose, not all scope movies will fit it perfectly. A 2.40:1 movie on a 2.35:1 screen will have tiny letterbox bars about 8 pixels high on the top and bottom.

Yeah, that’s it. Really. Do those stand out to you?

In either case, you can compensate for this by adjusting the projector’s zoom lens to let tiny slivers of picture fall off the edges of the screen onto the masking material around the border, so that you’ll never see the black bars. While you’ll also lose a smidge of picture on either the sides or the top and bottom, the amount of picture information we’re talking about here is minuscule and will not affect the compositional intent of the photography. In fact, it’s well within the expected tolerances for variances in theatrical projection.

My personal feeling is that the difference between 2.35:1 and 2.40:1 is practically negligible. Because the electronic vertical stretch features built into in projectors and video processors to accommodate CIH viewers are programmed based on an expected target ratio of 2.35:1, not 2.40:1, installing a 2.35:1 screen and using the 2.35:1 presets is the path of least resistance, requiring much less complicated customization for what will ultimately not be noticeable to the eye in any case.

I chose to install a 2.35:1 screen in my home theater and have been very happy with it. Your mileage, as they say, may vary.

More on This Topic