In my Constant Image Height Refresher article a few weeks ago, I explained the two different ways of projecting a 2.35:1 movie picture onto a 2.35:1 screen in your home theater, either by the “Zoom Method” or by using an anamorphic lens attachment. Each process has its pros and cons. Zooming is easier and cheaper, while an anamorphic lens will give you a brighter picture that uses the projector’s entire pixel panel with no light spill off the screen. Unfortunately, anamorphic lenses are expensive – really expensive, enough so to scare off most interested buyers. Hoping to eliminate that barrier, anamorphic lens manufacturer Panamorph recently released a new low-cost lens called the CineVista that may be a breakthrough home theater product. Reps at the company were kind enough to let me test drive one to compare it against the more expensive model that I’ve used to date.

Why are anamorphic lenses so expensive? A good lens requires quality optics so as not to compromise other aspects of your picture. A low quality lens that leaves you with a blurry, poorly focused picture would pretty much defeat the point of adding the lens in the first place. Those quality optics don’t come cheaply.

The lens I have permanently installed in my home theater is a Panamorph UH480, which has an MSRP of $4,150 for a basic kit with a Chief projector mount and an attachment plate that remains fixed in place at all times. If you need a transport sled that allows you to slide the lens in and out of position (the ideal scenario), that price goes up to $5,150 for a manual version or $7,250 for an automated model. (I have the manual sled.) These prices may leave many home theater fans with sticker shock. You can get a pretty decent home theater projector for less than the price of this lens add-on. 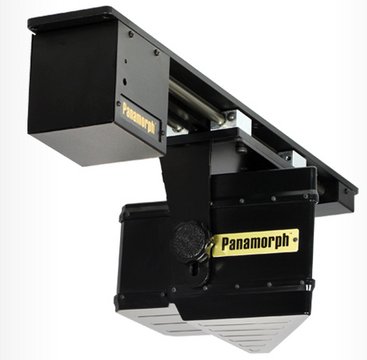 Believe it or not, Panamorph lenses are actually some of the most affordable on the market. Competitor products such as ISCO can be significantly more expensive. As a result, most projector owners who are interested in Constant Image Height opt for the simpler Zoom Method, at least at first.

With the goal of appealing to a market segment that might have previously dismissed the purchase of an expensive anamorphic lens out of hand, Panamorph set about designing a streamlined, entry-level product that would retail for a much more reachable price point. The new CineVista lens sells for $1,795 for just the lens and a simple bracket (no projector mount), or $2,495 for a package that includes the lens, bracket and an attachment plate that sandwiches between the projector and a ceiling mount. (The attachment plate affixes the lens to the ceiling mount, which you’ll have to obtain separately. It’s designed to work with the two most popular manufacturers, Chief Manufacturing and OmniMount.) As I’ll explain in a little more detail shortly, the CineVista is intended to remain fixed in place in front of the projector at all times.

Between these is a third package with a custom bracket designed specifically for Sony, Epson and JVC projectors. I’m told that these brackets will be easy to install and will look like part of the projector itself. That package (lens, attachment plate and custom bracket) won’t be available until late September, but will sell for a slightly reduced $1,995. (The custom bracket will only work with these projector brands, whereas the more expensive bracket is a universal design.)

True, this isn’t peanuts. The lens is still pretty expensive, but for the product category that it’s competing in, the CineVista is very reasonably priced. A home theater fan serious about Constant Image Height projection could feasibly afford one, or at least save up for one without too much difficulty.

Also keep in mind that the attachment plate is only needed if your projector is mounted to the ceiling. If your projector sits on a shelf or table, you should be able to simply place the lens by itself in front of the projector – though to get the right height, you may need to set it on top of something, like a book, or affix the bracket to the shelf. (As I discovered the hard way, the bracket that my review sample came with is not appropriate to use as a freestanding base. It’s too narrow, which caused the lens to tip over. It’s meant to be permanently screwed in.)

What’s Different About the CineVista?

In addition to not coming with a projector mount, the CineVista lens is much smaller and lighter than the UH480. I could comfortably cup it in the palm of my hand. 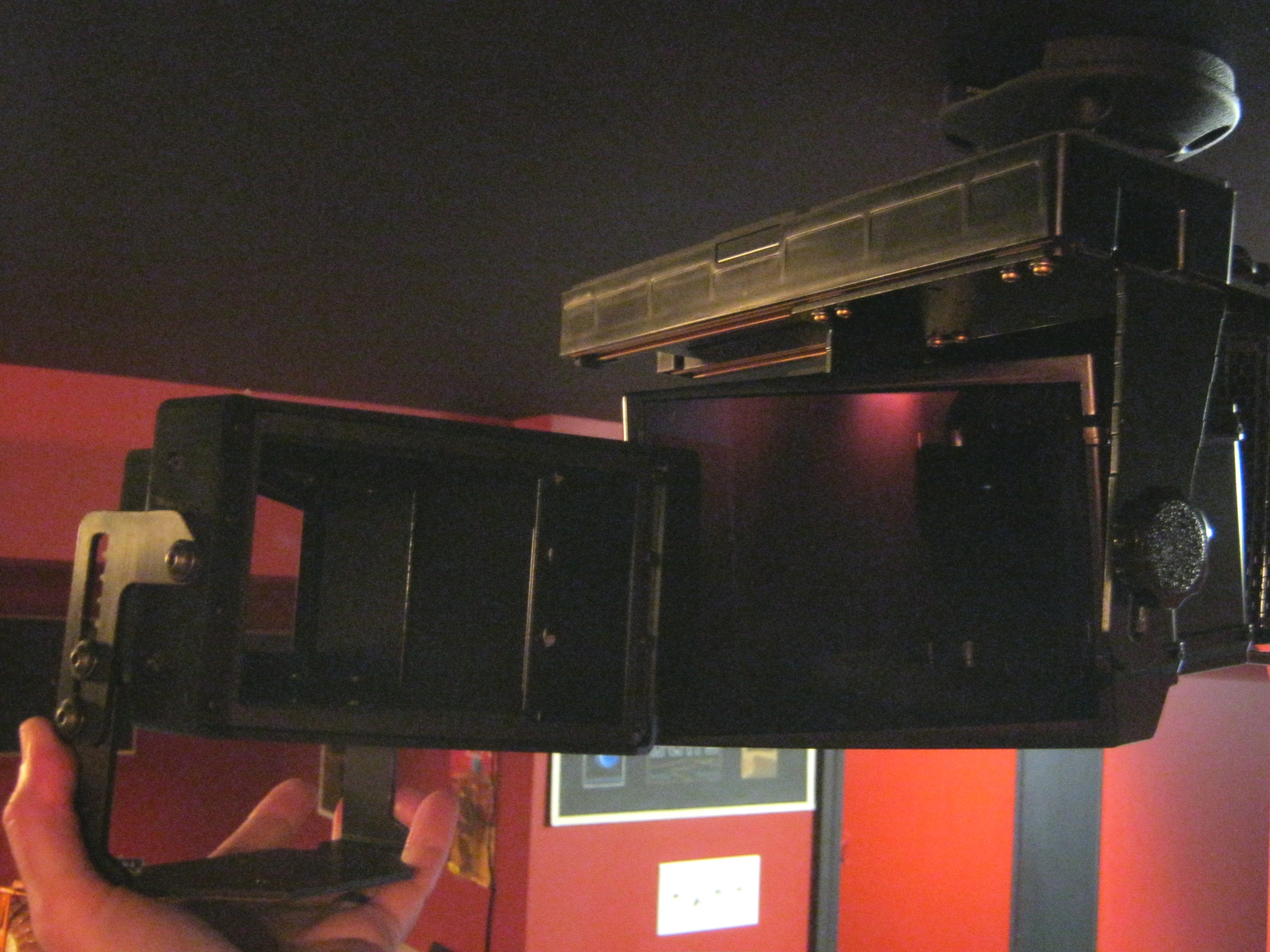 The smaller size means less glass and material, which is one reason for the lower price point. However, I tested it with two projectors, and it was still plenty large enough to pass the entire light beam without issue.

Perhaps more significantly, unlike higher-end lenses, the CineVista does not feature optical correction for chromatic aberration. This means that, as light passes through the lens, colors may separate and fail to focus together on the same point. That can lead to color fringing artifacts, as you can see on the following test patterns.

[Note: These images were provided by Panamorph. I tried to take photographs off my own screen, but I’m such a poor photographer that they didn’t turn out very clear. Nevertheless, what you see here is representative of the artifacts I also saw on my screen.] 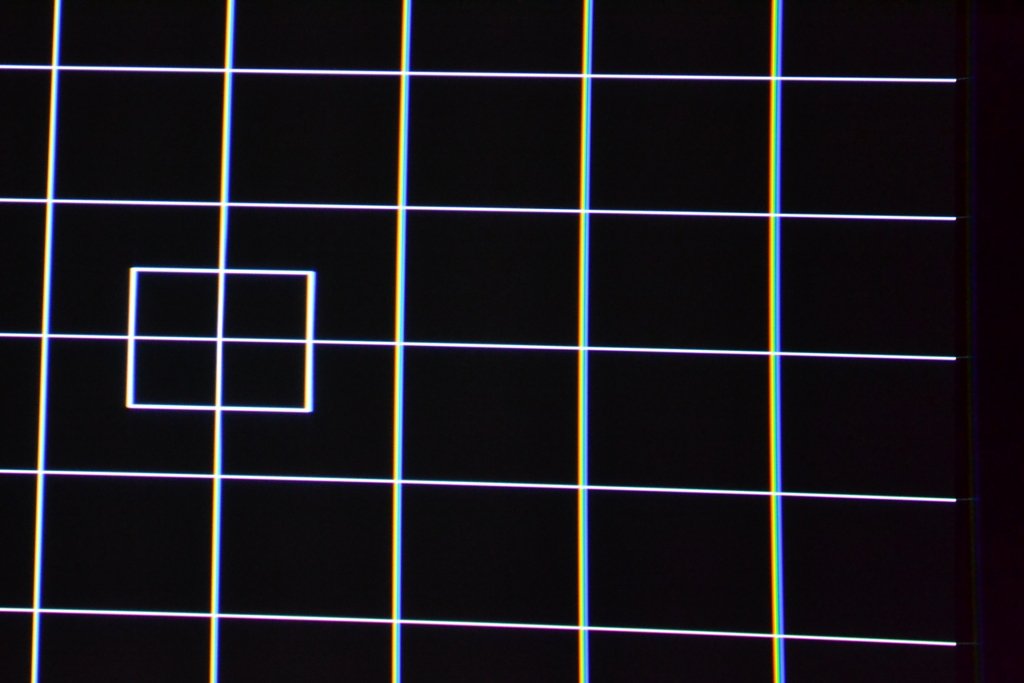 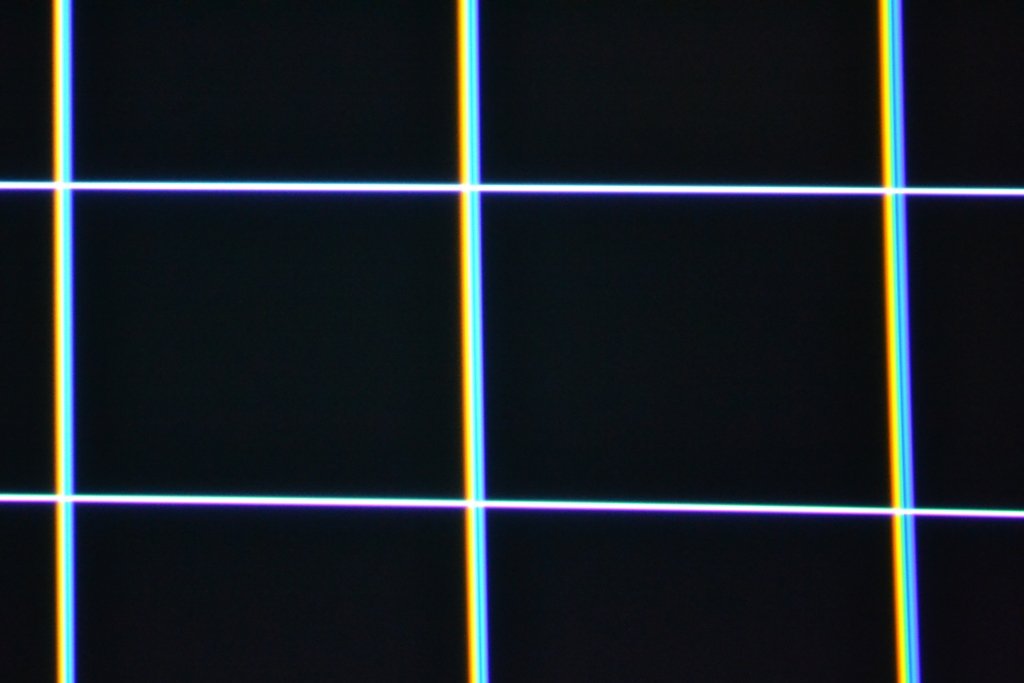 The color separation gets worse the further out from the center of the lens, which is why the fringing is more visible on the sides.

If this sounds like a deal-breaker, all is not necessarily lost. Many modern three-chip projectors (mainly LCD or LCoS, plus some high-end three-chip DLP models) offer electronic color correction that will allow you to adjust and converge the colors properly during calibration. Older models typically required that the entire panel for one color (red, green or blue) be shifted uniformly all at once, which isn’t much help if you see different amounts of fringing in different parts of the screen. Newer projectors can independently adjust different zones across the screen.

During my testing, I used an Epson Powerlite 6020UB LCD projector, which allowed me to precisely dial in the position of colors all across the screen. This effectively negated the optical flaw in the lens. Whether achieved through optics or through electronic correction, the end result is the same: perfectly converged colors with no fringing. Because of the need for electronic correction to the image, the CineVista is intended to remain fixed in place in front of the projector at all times. If you remove it, your electronic calibration values will cause color misalignment that isn’t there with the lens in place.

Alternately, if your projector will allow you to store separate color correction calibration settings, you could program one preset for use with the lens in place and another for use without the lens. This would probably be the preferred scenario.

Should you choose to leave the lens in place at all times, you’ll need to electronically scale content narrower than 2.35:1 to appear properly pillarboxed in the center of the image. (You can read more about that in this article.) Doing so will reduce the active resolution of 16:9 material to 1440×1080 pixels. Whether you find this to be an acceptable trade-off will be a matter of personal opinion. In general, human vision is more attuned to vertical resolution than horizontal resolution, and many viewers may not find this objectionable.

All of this is a moot point if you have a single-chip DLP projector, which won’t be able to apply the electronic color convergence. The combination of a CineVista on a single-chip DLP will mean that the chromatic aberration is uncorrectable.

With that said, I tested the CineVista with a Sharp XV-Z30000 DLP projector (single-chip) quite extensively. While the color fringing was definitely visible on test patterns, it was very rarely noticeable on normal viewing content. Most people would probably never see it if they didn’t know in advance to look for it.

As an introductory anamorphic lens for Constant Image Height viewers who can’t afford a higher-end model, the Panamorph CineVista lens is a pretty impressive product. Although it has some design compromises to hit the lower price point, I expect that most interested projector owners will be able to live with them. In other respects, the lens provides the same benefits of higher light concentration and pixel count as its more expensive brethren, for a much lower cost.

Ultimately, however, the CineVista does have some shortcomings that a potential owner will need to weigh against his or her own needs. Among Panamorph products, the UH480 and DC1 models remain superior lenses, and are recommended if you can afford the investment.

For more information about the CineVista and other anamorphic lenses, see the Panamorph web site.