For a longtime self-professed videophile, you’d think I would have upgraded my home theater to 4k quite a while ago. I hesitated for a few reasons, chief among them that I was waiting for the right home theater projector that met all my needs and requirements. With the arrival of a new JVC DLA-NX7, I’ve finally jumped into the HDR waters.

“It’s about time!” some of our readers will surely be saying. I get it, but I simply wasn’t going to make a major investment like this until I was reasonably confident that I’d be happy with it for more than just a couple of years. On top of that, quite honestly, I still feel that 1080p is the sweet spot that satisfies the majority of movie-watching needs. Most of my movie collection is comprised of 1080p Blu-ray discs, and up to now I’d still gotten very pleasing results with my 1080p projector, which some of our readers may remember is more than a decade old at this point. When my venerable JVC DLA-RS40 died on me last year, I had to pull an even older DLA-RS2 out of storage. That’s what I’ve been using for the past ten months, a projector of 2007 vintage, and I’ll be damned if it didn’t still put out an extremely nice picture that shames many modern LCD and DLP models (yes, even some that are “4k”).

After that incident, I thought long and hard about my next upgrade. I considered buying a cheap-ish Epson LCD projector as a stopgap, but I knew that I wouldn’t be happy with that decision. As a loyal JVC fan, I could have gotten a DLA-RS540, a highly regarded pixel-shifting (so-called “Faux K”) model from 2017. However, at the time my RS40 died, the 2018 lineup of JVC projectors, featuring the brand’s first models with native 4k panels, was supposedly right around the corner. I decided that the RS2 could hold me over for a couple months.

Unfortunately, a manufacturing defect caught at the last minute caused the entire JVC line that was originally scheduled to hit retail in November 2018 to be pushed back until early 2019. For the NX7 that I was waiting for, early 2019 turned into mid 2019. Even as the first units hit American shores, they were backordered and only trickled out slowly.

On top of all this, once they started coming out, early reports claimed that a non-trivial number of these projectors were arriving either D.O.A. or with significant image defects that made them unusable. The most plausible theory speculates that these models are particularly susceptible to damage while being jostled during shipping. The act of delivery drivers throwing them around caused panels to become misaligned or dislodged, requiring replacement of the entire projector. A friend of mine had to send back a defective RS1000 (a.k.a. NX5).

To JVC’s credit, the company has been very responsive to these issues, acting quickly to get replacements to those who need them. The downside of that, of course, is that it extended the backorder for others such as myself. Fortunately, response from owners with working units (which, to be fair, are the majority) has been glowing regarding the projectors’ picture quality.

Once I felt ready to buy, I placed an order with Value Electronics, home of the annual HDTV Shootout and the store that hosted the JVC and Panasonic demo a few months ago. In the hope of minimizing the chances of getting a damaged unit, I even arranged to drive to the store in Scarsdale, NY and pick it up in person. The fact that I live three-and-a-half hours away in Boston should tell you how anxious I was about everything to do with this projector. One of my sons made the trip with me, and we stopped at Legoland in Yonkers on the way. He was a very good traveling companion on a very long day.

[I’d also like to express thanks here to Robert from AudioVisions, who was very accommodating in offering good deals on several potential projectors. Ultimately, however, the opportunity to avoid letting a UPS or Fed Ex driver toss my projector around on the back of a truck was very compelling to me.]

After all that preamble, let’s get to the unboxing photos.

Every unboxing must start with a box. This is a big one. I needed help getting it down the stairs to my basement because I tried very hard not to tip it over sideways. 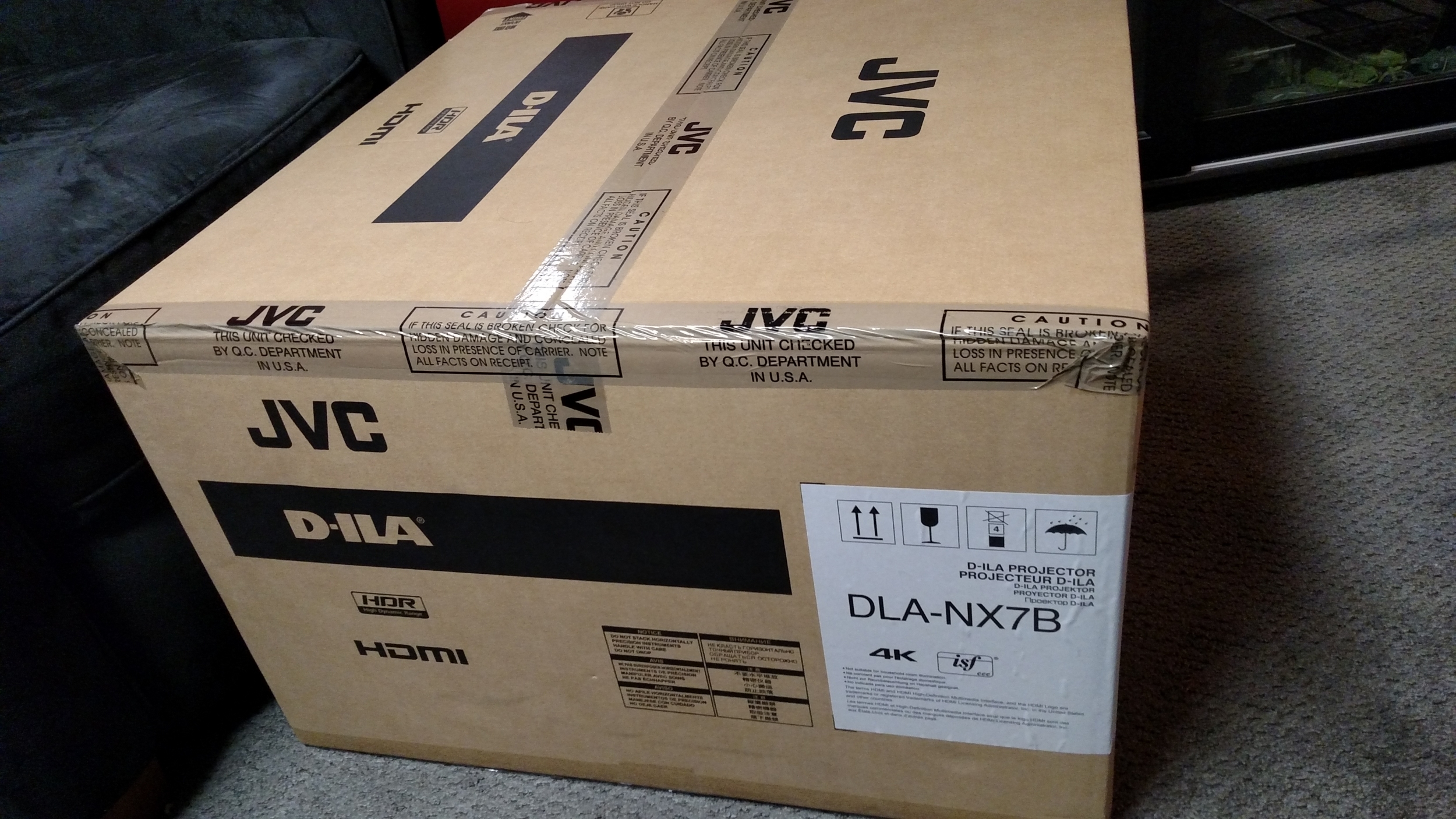 Opening it up, the only things inside are the projector, a power cord, the remote with batteries, and the Quick User Guide, plus warranty paperwork, etc. The full owner’s manual is only available online. 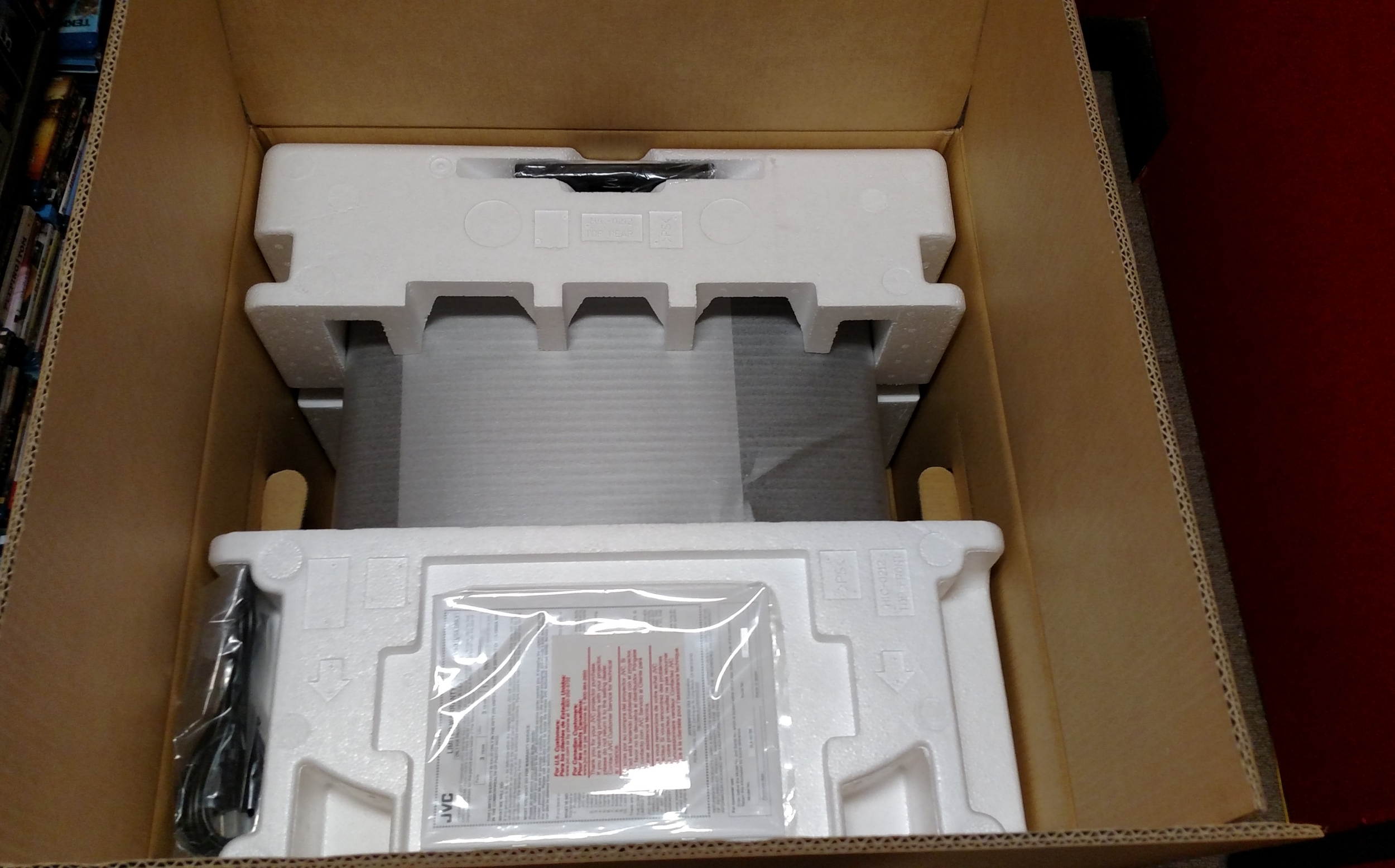 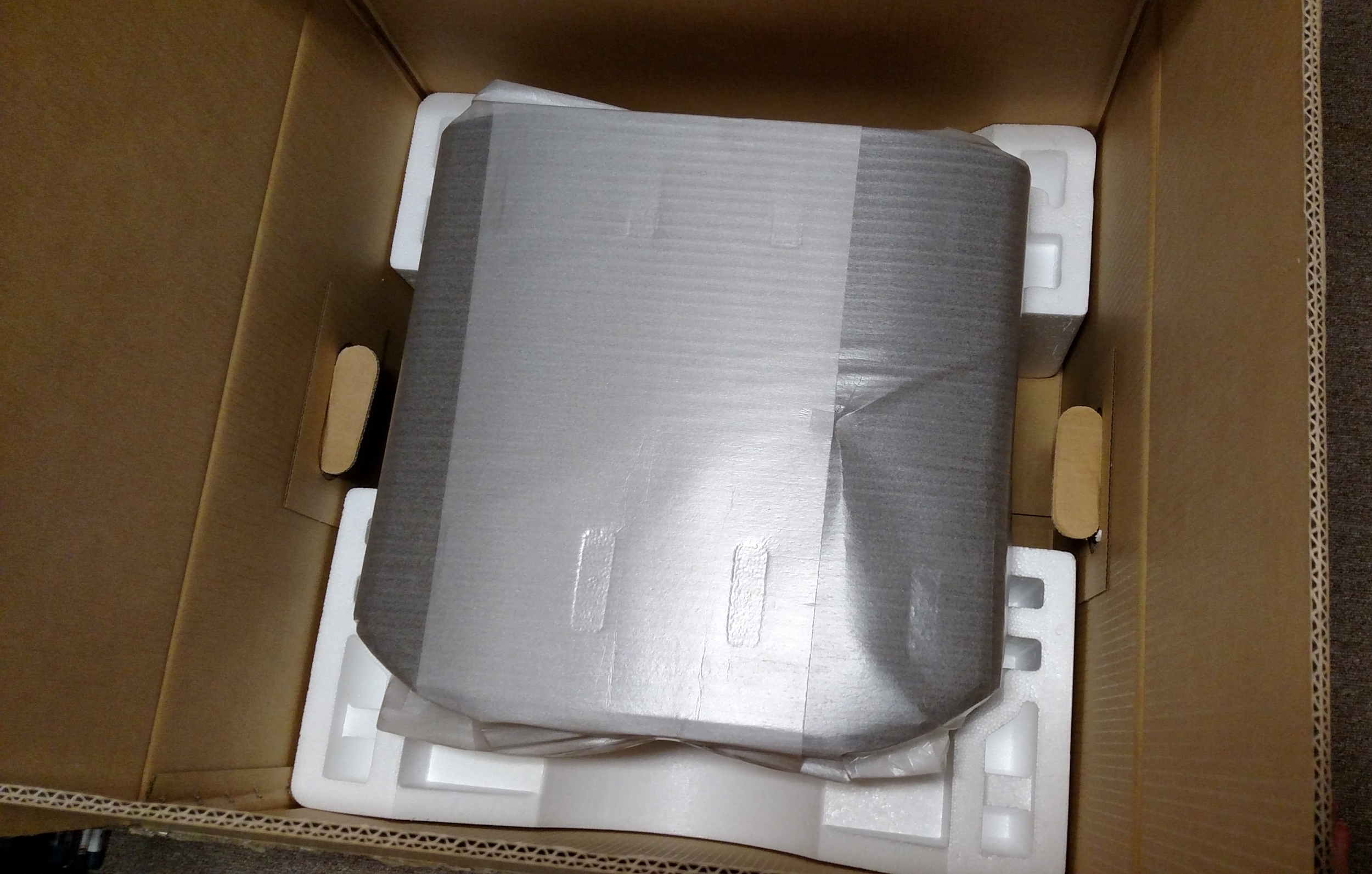 There she is. She’s lovely and – with dimensions of 19.625″ x 9.25″ x 19.5″ and a weight of almost 44 pounds – she’s huge! This is definitely the largest and heaviest home theater projector I’ve owned by some margin. The larger size is reflective of the larger imaging panel inside, larger lens in front, and I assume the need for additional cooling and ventilation. 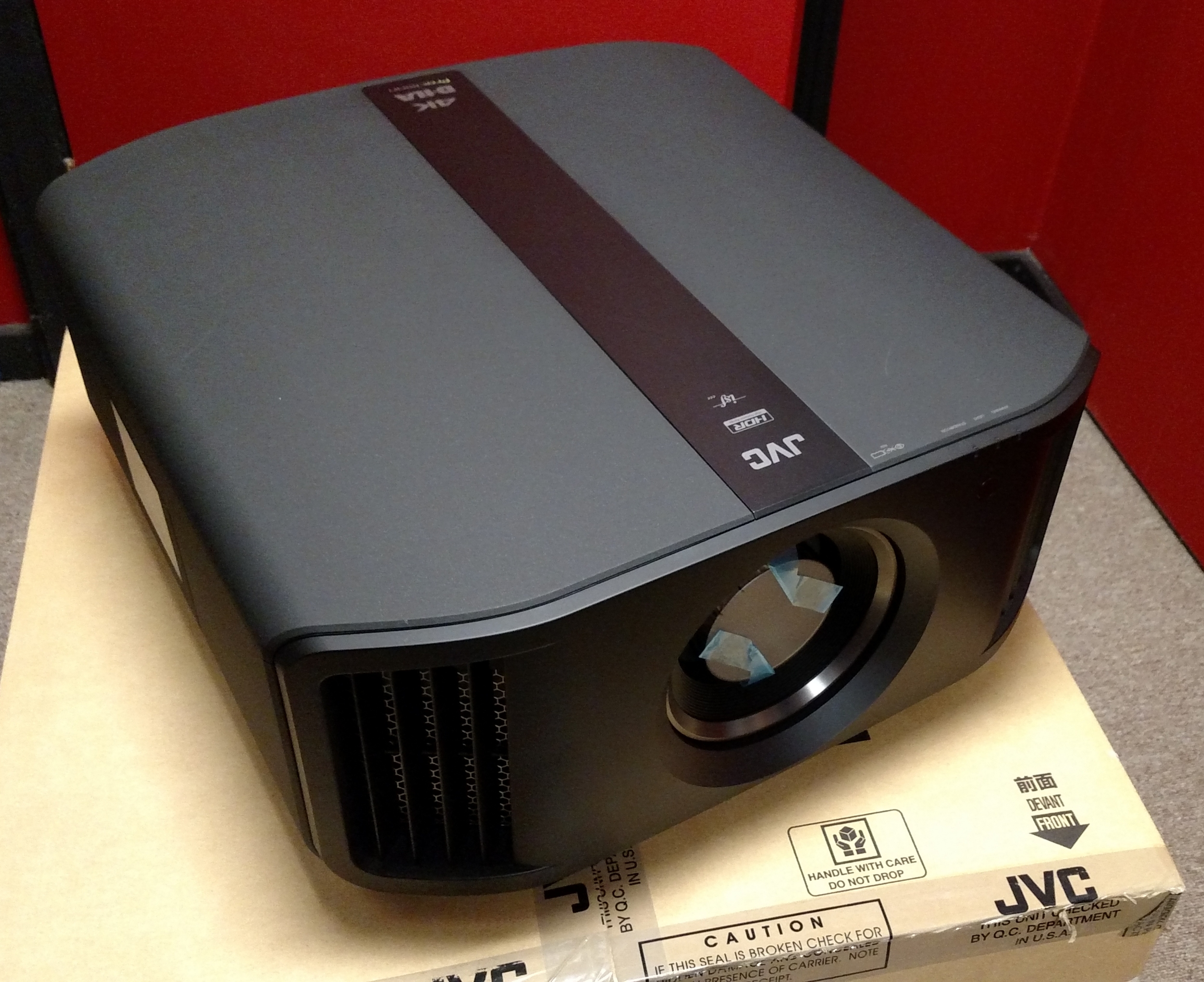 The DLA-NX7 is the same projector as the “Pro” model DLA-RS2000. The only difference between them is that the Pro line has a gold ring around the lens rather than silver. JVC continues to maintain separate consumer and professional lines for different retail channels even though the actual product is the same in all ways except a small cosmetic difference. 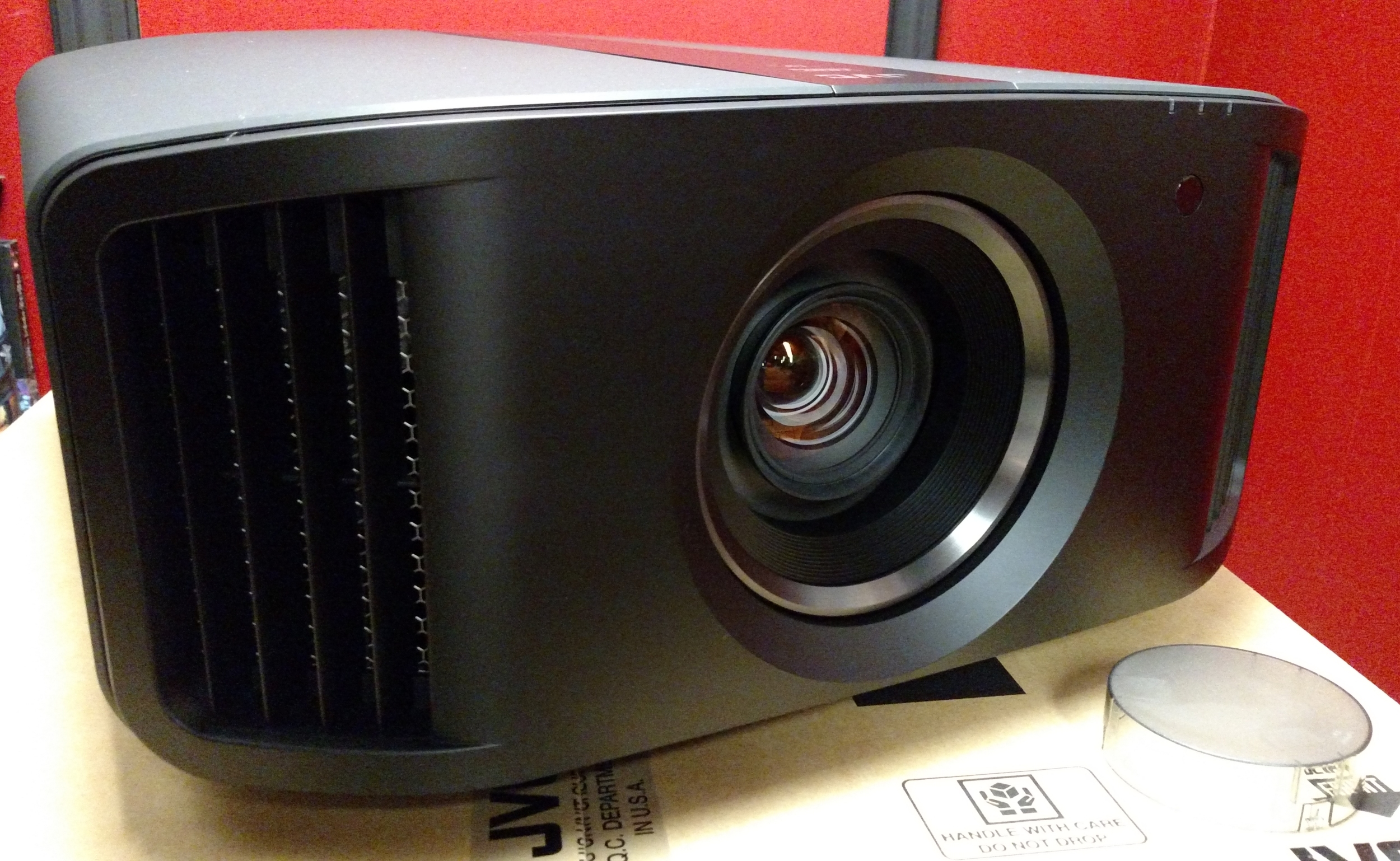 The back panel has two HDMI inputs. 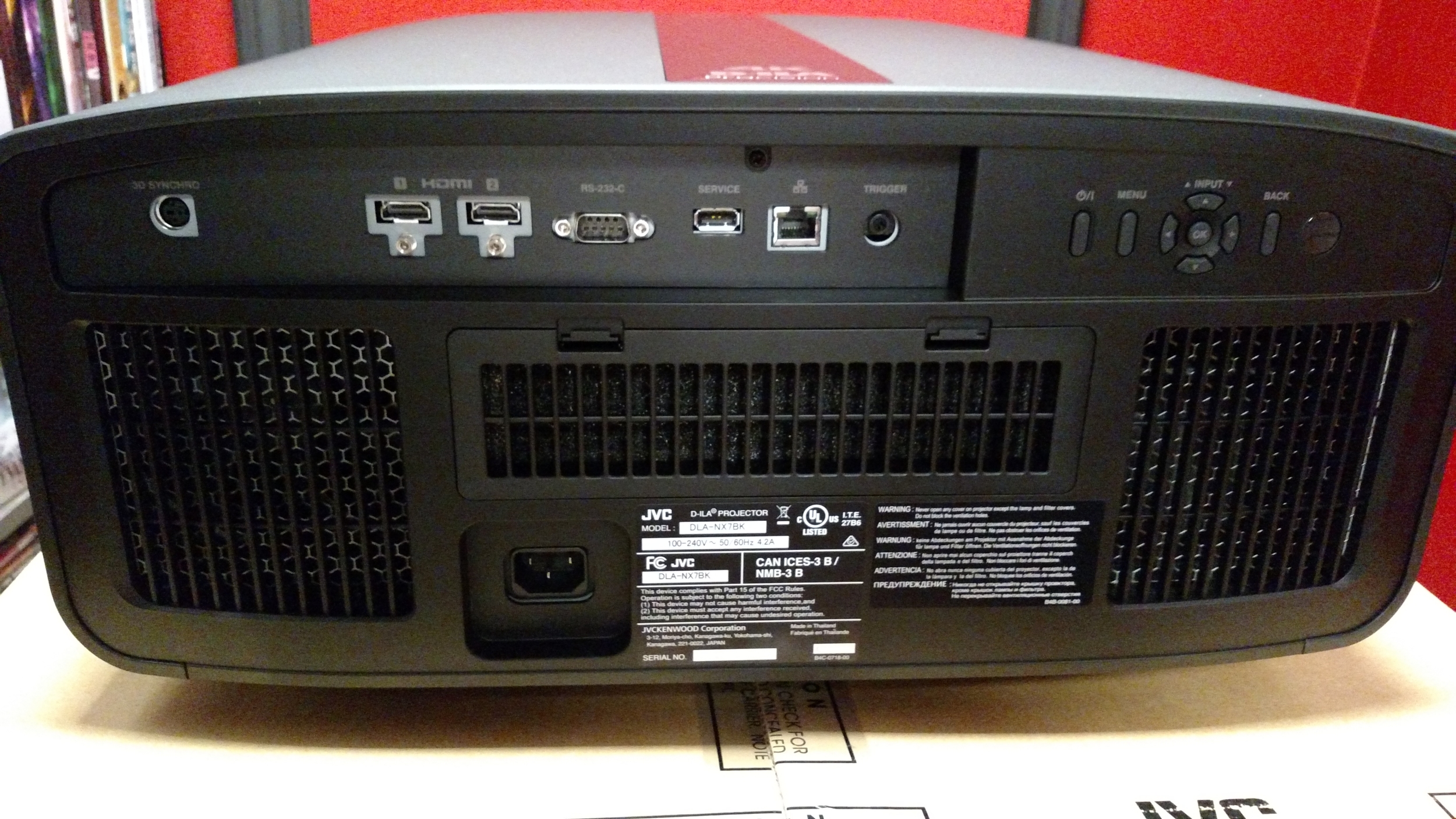 The lamp compartment is on the right side of the projector, if oriented right side up for shelf mounting. 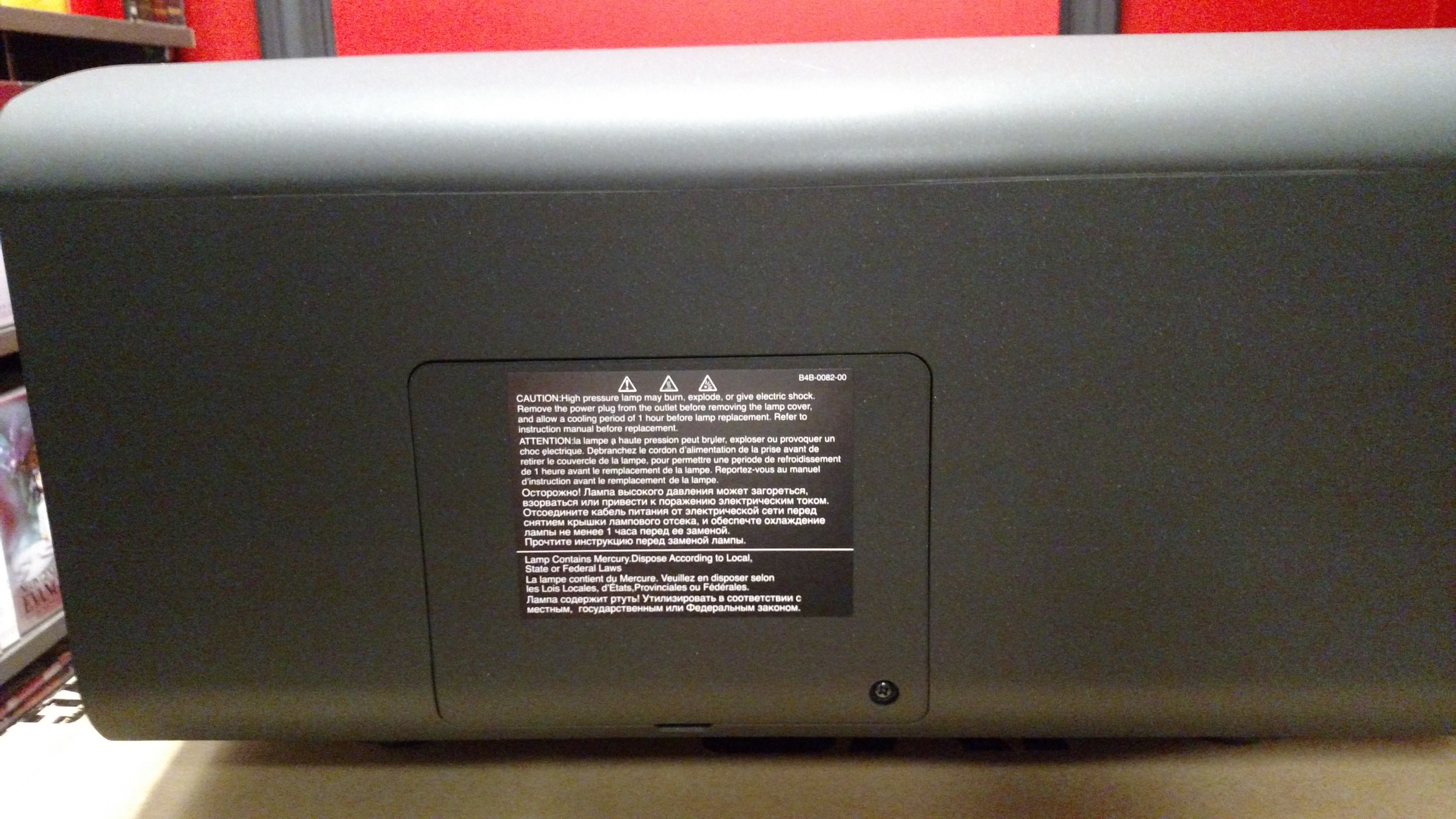 Here’s a comparison with the projector this one is replacing. This monster dwarfs the DLA-RS2!

I’m shelf-mounting the projector for the initial installation until I’m comfortable that it’s bug-free. Later, I’ll move it to my ceiling mount. 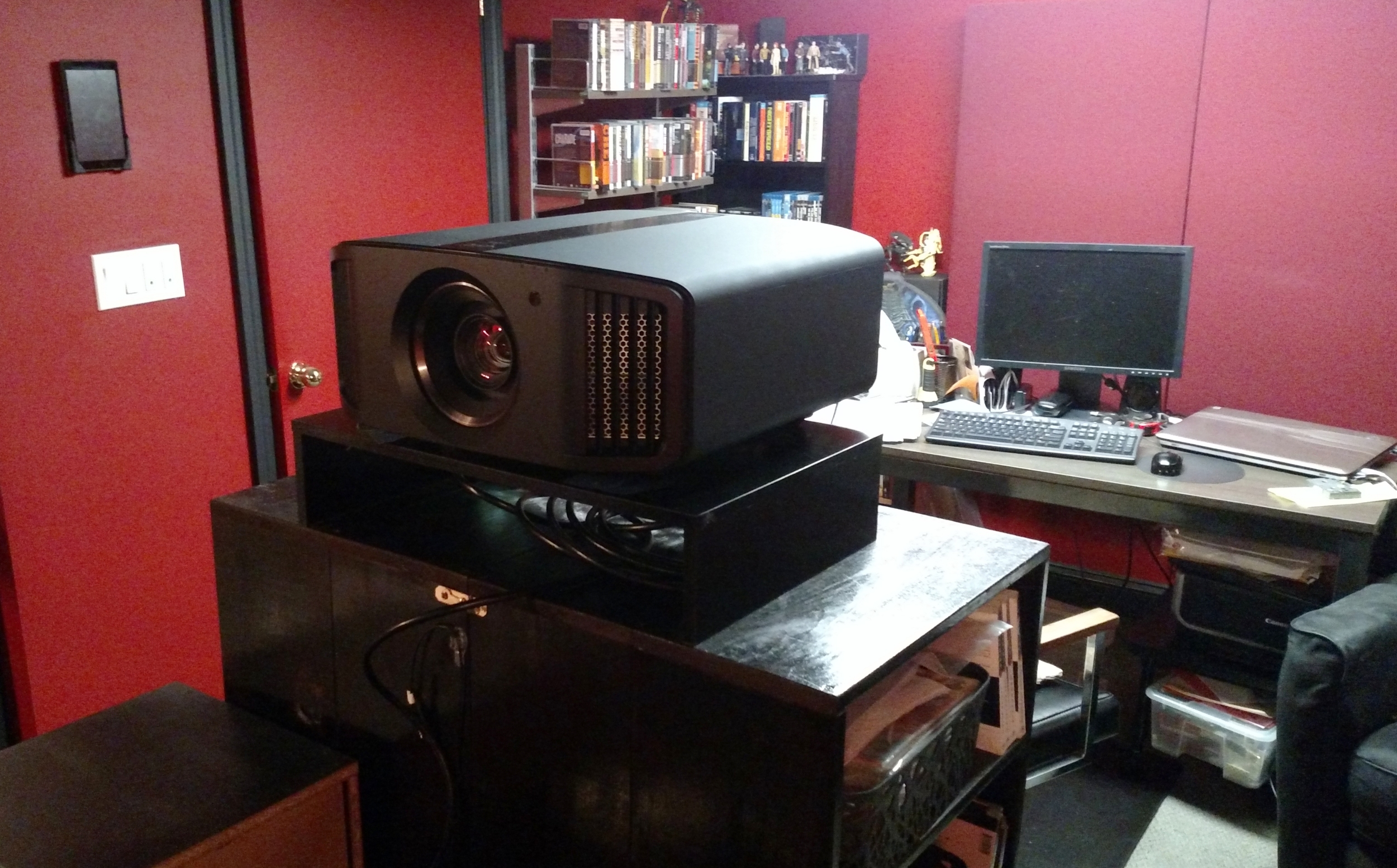 Witness the evolution of JVC projector remotes, from the RS2 (left) to RS40 (center) to NX7 (right). 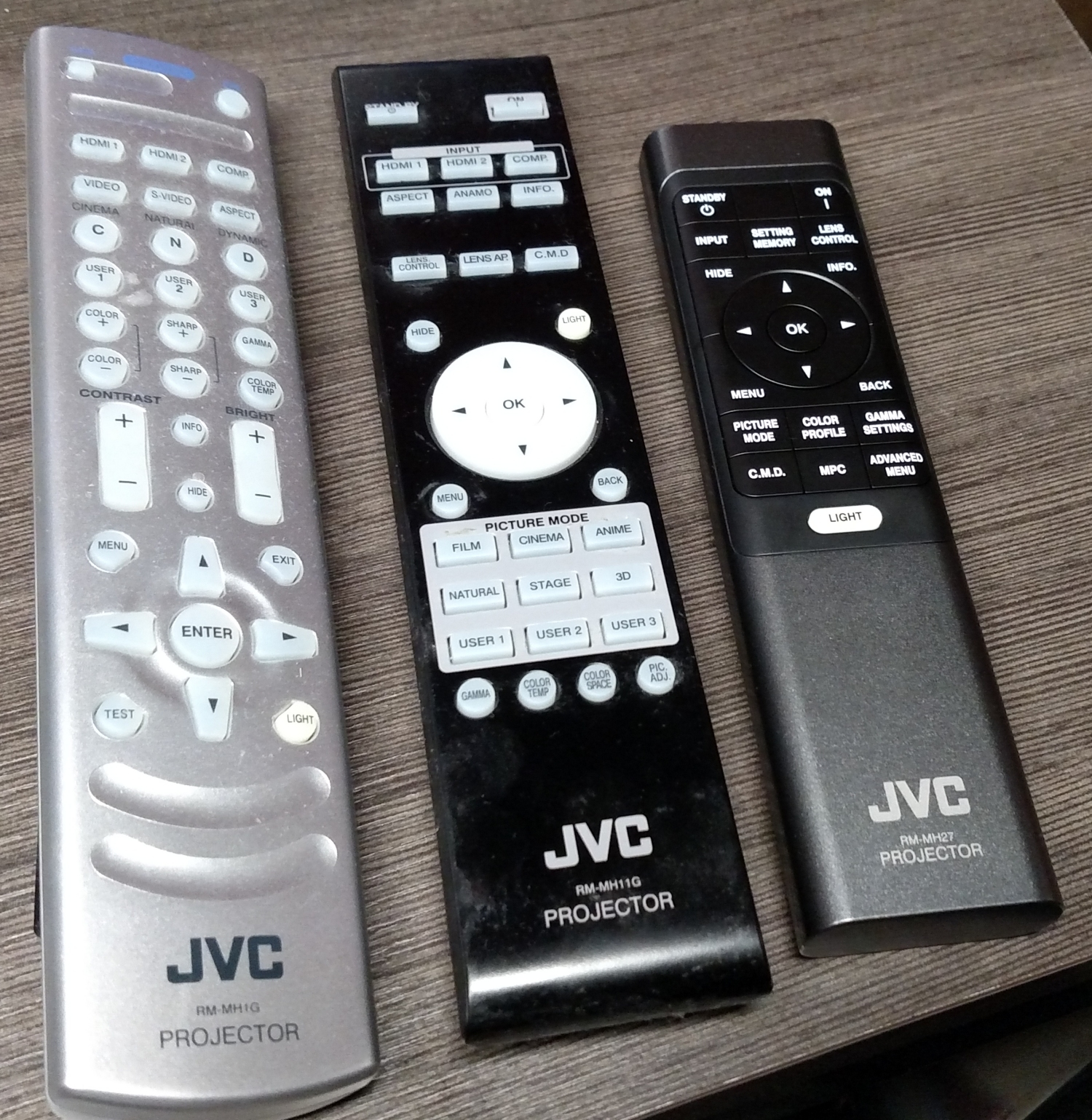 I’ve only got about five hours on the lamp so far as I write this, but (knock on wood) I’ve had no operational issues. Everything seems to be in good working order. Although my first impressions are definitely positive, some of the projector’s setup menus are needlessly confusing and the automated lens memory settings are a little frustrating. I also find HDR (in a general sense, not necessarily specific to this projector) to be a tremendous pain in the ass to set up and calibrate. I’ll write some more about all that in a future article.

Overall, I’m excited for the move to 4k. Perhaps this upgrade will shut up some of the whiners on another Blu-ray forum I won’t name here, who insist that I think 4k is the devil’s work. (Realistically, nah, it probably won’t.)