Technically, this doesn’t have anything to do with movies or home theater… yet. But it’s pretty cool, and today is a slow news day after a holiday, so I feel like sharing it. In these days when print publishing is facing enormous threat of obsolescence from the likes of e-readers, iPads and so forth, some authors still have a strong attachment to the traditional medium of books on paper. In his previous novels, Jonathan Safran Foer has often played with fonts and page layouts to interact with the ways a reader follows his storytelling. In his new book, he takes these ideas about twenty steps further. Seriously, this thing is crazy!

The book is called ‘Tree of Codes’, and every single word of it is hidden within someone else’s novel – specifically, within a book called ‘The Street of Crocodiles’ by Polish author Bruno Schulz. Notice the way that every letter of “tree of codes” is found within “street of crocodiles,” and in the correct order. Now try to fathom a whole book written in this fashion. Foer has used a die cutting process to remove words and letters from Schulz’s text, leaving only those he wants you to read, in the order he wants you to read them, to create an entirely new narrative. The pages are arranged in a complex series of overlapping layers. 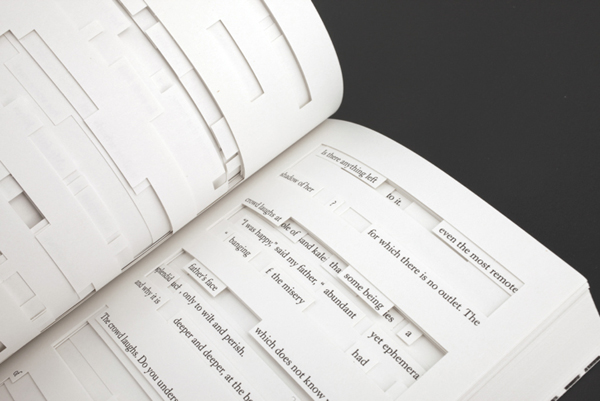 Foer explains what he’s doing in this video:

Of course, this begs the question of whether there’s actually a worthwhile story buried somewhere in there, or if this is just a gimmick. I’ll be honest, I found a lot of Foer’s first novel, ‘Everything Is Illuminated’, to be kind of pretentious and gimmicky. However, his second book, ‘Extremely Loud and Incredibly Close’, is devastatingly powerful. I suppose this could go either way.

On its face, you’d think that something like this would make a book unadaptable to film, but I wouldn’t put it past someone in Hollywood to try. ‘Everything Is Illuminated’ was made into a movie starring Elijah Wood. Literally half the book had to be thrown out, but a movie got pulled out of it somehow. The film rights to ‘Extremely Loud’ were bought up by Warner Bros. and Paramount. Stephen Daldry (‘The Reader‘) is currently attached to direct. If someone wants to make a movie out of this one, I suggest they might need to construct a story entirely out of clips from other movies.

[via Door Sixteen. Thanks to Mrs. Z for the tip.]