The Prize didn’t win any prizes from the Academy, but this slick mix of suspense, glamor, wit, and intrigue just might be more entertaining than this weekend’s Oscar telecast. Who knew winning a Nobel Prize could be so dangerous?

Take the Grand Hotel blueprint, spice it up with plenty of Hitchcockian wit and tension, and sprinkle in some Cold War intrigue, and you’ve got The Prize, a sleek, glossy adaptation of Irving Wallace’s bestselling novel. Though director Mark Robson (Peyton Place, Valley of the Dolls, Earthquake) may lack the finesse and artistry of the Master of Suspense, he nevertheless constructs a beguiling bit of popcorn entertainment peppered with a few bona fide thrills. Esteemed screenwriter Ernest Lehman borrows a bit too heavily from other sources – most notably, his own script for North by Northwest – but in a surprising and refreshing twist, such familiarity doesn’t breed contempt. The Prize may not be memorable, but it’s a lot of fun while it lasts.

Just like Grand Hotel introduces us to an array of guests staying at a posh European hotel and cleverly intertwines their disparate lives, so too does The Prize, yet the characters’ reputations are far loftier. The cream-of-the-crop lodgers in Lehman’s screenplay have just arrived in Stockholm to receive the highest of all honors, the famed Nobel Prize, and guess what? They’re all checking into the Swedish capital’s luxurious Grand Hotel. Chief among the honorees is Andrew Craig (Paul Newman), a jaded, alcoholic novelist in the F. Scott Fitzgerald mold who can’t fathom why he’s been awarded the literature prize and cares precious little about it. He’s far more interested in the $50,000 check he’ll receive and the cool blonde attaché (Elke Sommer) who’s been assigned by the Nobel Committee to babysit him during the festivities. At the pre-ceremony press conference, Andrew reveals that he also writes pulpy mystery yarns under a pseudonym – much to the horror of those in attendance – but little does he know his talent for unraveling criminal webs will come in quite handy when the atmosphere swirling about the Nobel winners becomes increasingly dangerous.

The treachery begins when gregarious, warm-hearted Nobel physicist Dr. Max Stratman (Edward G. Robinson), a German expatriate and ardent supporter of American ideals, is pressured to renounce his award, defect to East Germany, and ply his trade behind the Iron Curtain. When he refuses, he’s abducted by a gang of thugs. The next day, Stratman shows up at the Nobel press conference none the worse for wear, but with a significantly altered demeanor. He’s sour and reserved, impatient and uncomfortable, and – most tellingly – doesn’t remember meeting and arranging a lunch date with Andrew Craig the night before. Could he be an imposter? Andrew smells a rat, but his reputation as a womanizing drunkard leads many to think he’s delusional. Undaunted, he follows his hunches, which quickly vault him into an abyss of Cold War skullduggery. Before anyone can say “Nikita Khrushchev,” Andrew becomes a target of Communist agents who seek to silence him before he can expose their nefarious scheme.

Subplots involving the other Nobel laureates at first seem superfluous, but they all conveniently interconnect as the story hurtles toward its climax. Though Lehman adapted The Prize four years after writing North by Northwest, the classic Hitchcock thriller still must have been swimming around in his brain, because his script eerily recycles many of that film’s most identifiable elements. Instead of a crop-dusting plane pursuing Cary Grant across a cornfield, a speeding car repeatedly tries to run Newman off a bridge. Just like Grant romantically tangling with aloof blonde Eva Marie Saint, Newman defrosts the icy Sommer in a couple steamy trysts. Of course, nothing could top the climactic chase across the faces of Mount Rushmore, so Lehman devises a cliffhanging finale in which Newman slugs it out with a slithery assassin who bears a striking resemblance to creepy North by Northwest baddie Martin Landau on the ornate and perilous Academy rooftop instead.

All that, and plenty of droll repartee, too. Lehman laces his screenplay with several laugh-out-loud one-liners and clever retorts that nicely temper the action scenes and lighten the film’s tone. Humor and whimsy play an even bigger role in The Prize than they do in North by Northwest, perhaps because the plot is slightly more far-fetched and requires more tongue-in-cheek quips to make it palatable. Stock footage of Stockholm supplies a slight European flavor, but The Prize was completely – and obviously – studio shot, and that palpable air of artifice heightens the film’s fanciful feel.

Newman brings plenty of macho movie-star glamour to his cardboard role, yet often acts like he’s auditioning to play a Hitchcock hero. His tactic must have worked, because just a couple of years later the Master of Suspense would cast him as an American physicist who defects to East Germany (wait a second, that sounds a lot like this movie!) as part of a covert intelligence operation in Torn Curtain. Newman looks to be having a ton more fun here, however, and his scenes with the alluring Sommer (in her first Hollywood film) crackle with sexual tension.

Robinson is quite good in a dual role, as is the underrated Diane Baker as Stratman’s suspicious and conflicted niece. Kevin McCarthy (best known as the star of the original Invasion of the Body Snatchers) is wasted in a throwaway part, but North by Northwest alum Leo G. Carroll makes an indelible impression in a role that’s very similar to one played by Lewis Stone in Grand Hotel. Unfortunately, The Prize doesn’t boast the same type of high-wattage all-star cast that distinguished Grand Hotel, probably due to budgetary constraints. Maybe if it did, it might be more renowned and better remembered today.

If the Oscars bore you, why not watch the presentation of Nobel Prizes instead? The Prize may be just as vacuous as the Oscar telecast, but it’s way shorter and surely more thrilling, romantic, and comedic. It’s also a much better partner for your popcorn and – best of all – it has no dull acceptance speeches.

Once again, Warner Archive does a superior job with a classic movie transfer, making a 55-year-old movie look almost brand new. Presented in its original aspect ratio of 2.35:1, the 1080p/AVC MPEG-4 transfer of The Prize exhibits excellent contrast and clarity. Grain levels fluctuate somewhat, but remain well resolved overall, and though a few scenes err on the soft side, they don’t disrupt the film’s flow. Colors, especially reds and greens, are lush and vibrant. Black and white levels are nicely balanced, too, and the print is free of any age-related marks or scratches. Unfortunately, the enhanced clarity calls undue attention to the movie’s rampant use of rear projection shots (make no mistake, The Prize was not shot on location in Stockholm), but that’s a small price to pay for such a great-looking picture.

The DTS-HD Master Audio 2.0 mono track sounds surprisingly full-bodied and expansive. The crisp accents of the percussion-laden musical score by Jerry Goldsmith are especially well rendered, and a wide dynamic range showcases all of its highs and lows without a hint of distortion. All the dialogue is easy to understand, and any residual hiss, pops, or crackle have been erased. The only disc supplement is the movie’s original theatrical trailer. 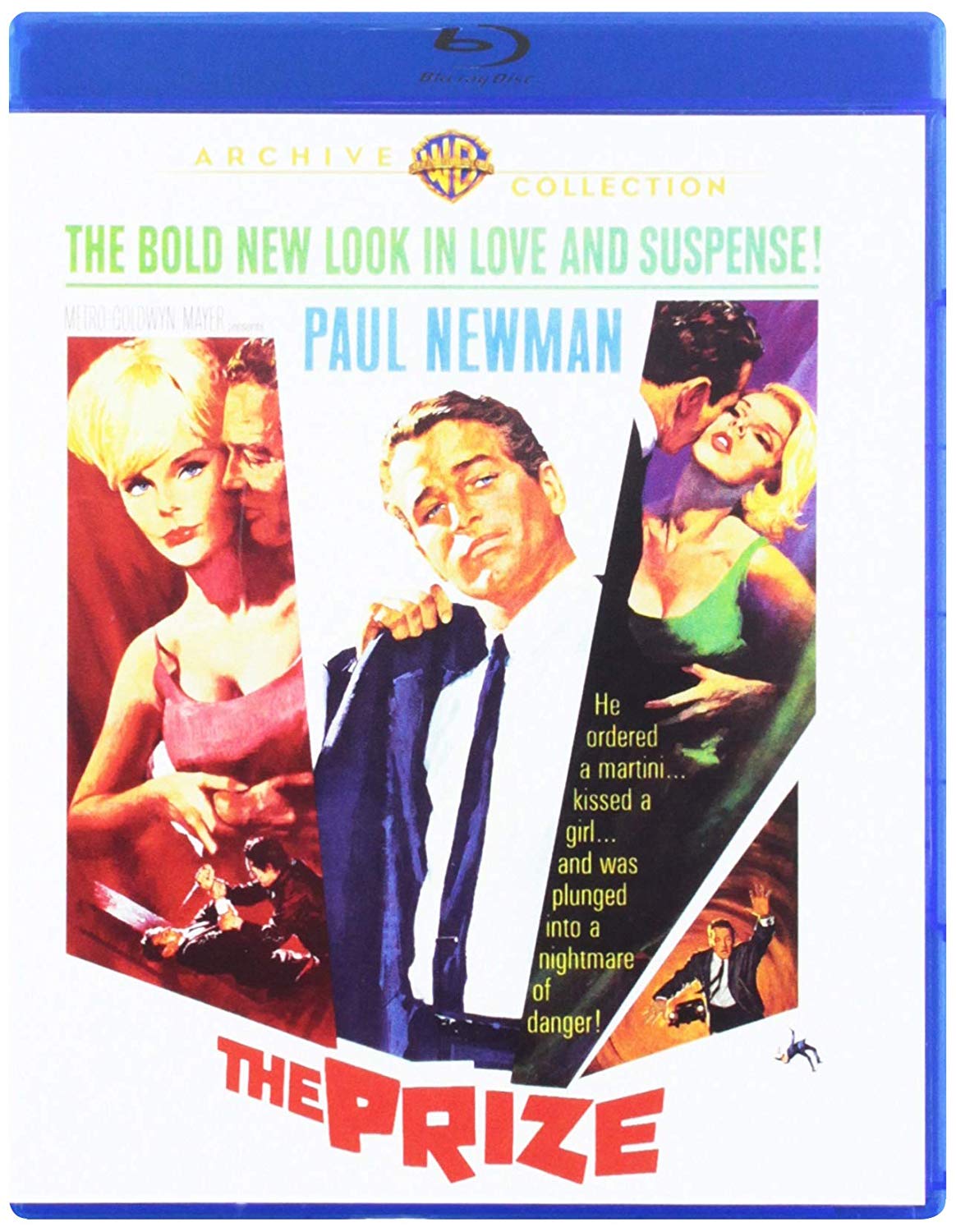 The Prize Blu-ray – Buy at Amazon

TagsBlu-ray Edward G. Robinson Elke Sommer From Silents to the Seventies Off the Shelf Paul Newman The Prize