Ruth Roman is perhaps best known for playing Farley Granger’s love interest in the Alfred Hitchcock classic Strangers on a Train, but her elegant, raven-haired presence, throaty voice, and tough yet tender persona graced dozens of films and TV shows over the course of five decades. Roman’s most prolific period was the 1950s, during which she headlined a number of B movies, including the Cold War thriller 5 Steps to Danger, a snappy little mystery that’s been pleasantly revived by the fledgling ClassicFlix Blu-ray label. Though I can’t imagine many people pining for a high-def release of writer-director Henry S. Kesler’s tale of political intrigue, murder, psychosis and romance, the film’s arrival on the home video scene is nevertheless welcome news. I wouldn’t exactly call 5 Steps to Danger a lost gem, but it’s a fun (re)discovery for classic movie buffs.

Based on a serial that appeared in the old-time magazine The Saturday Evening Post, the film flaunts all the hallmarks of a story that’s been dragged out and embellished to a fare-thee-well by its author just to string captive readers along. Tangents, changes in tone, and an episodic construction help the movie wander all over the map, much like its free-roaming characters who hit the road on a mission to save the world.

When aimless drifter John Emmett (Hayden) encounters agitated widow Ann Nicholson (Roman) at a dumpy gas station in the California desert, she instantly propositions him… but her offer has nothing to do with sex. Ann is headed to Santa Fe, New Mexico, and she’s hoping the stranded John might be willing to share the driving with her so she can get there as quickly as possible. Since he’s bound for Texas, he agrees, but before they get too far down the pike, John learns some disturbing details about his traveling partner. A “chance” encounter with a registered nurse (Jeanne Cooper) who’s on Ann’s tail yields info about her fragile mental state, while a subsequent run-in with police reveals that Ann could be mixed up in a murder in L.A.

Hungry for answers, a bewildered, angry John confronts Ann, who recounts how her German heritage and ties to her homeland have led her to become the guardian of a precious compact mirror that’s encoded with detailed plans for the construction of nuclear ICBMs (intercontinental ballistic missiles). Ann must deliver the mirror to a CIA scientist in Santa Fe before it’s intercepted by Communist agents, one of whom – unbeknownst to Ann – just might be her trusted psychiatrist (Werner Klemperer).

What initially looks like a generic femme fatale-driven film noir quickly morphs first into a road picture, then into an espionage thriller with gaslight overtones. The script adds some requisite romance to the mix (John and Ann conveniently get handcuffed together, which of course always leads to love!), as well as a couple of clever plot twists. The result is a frenetic yet meandering, often preposterous 80-minute film that still manages to be quite entertaining in a check-your-brain-at-the-door kind of way. (The scattered, slapdash nature of 5 Steps to Danger also seems to have infected its publicity team, which inexplicably spelled out the word “Five” in all of the movie’s promotional materials, despite the fact that the numeral “5” appears on the screen title card. The mystery of why that happened remains unsolved.)

Roman is a good actress, and it’s a shame she never achieved the level of stardom she deserved. She attacks her colorful role with vigor and matches up well with Hayden, whose square-jawed stoicism and lack of pretension nicely complement her vulnerability. A man’s man who specialized in portraying strong, silent heroes with a fierce independent streak and low bullshit threshold, Hayden was one of the few actors of his day who could stand up to the likes of such formidable divas as Bette Davis, Joan Crawford, and Barbara Stanwyck, and he handles Roman with the same firmness. His performance anchors the film and his sober presence helps temper some of the plot’s more outrageous developments.

Klemperer, who we’ll always remember as the ever-exasperated Colonel Klink in the TV comedy Hogan’s Heroes, plays another slithery villain here. Cooper, who became one of the doyennes of daytime TV thanks to her 40-year stint on the CBS soap The Young and the Restless, asserts herself well as the cool blonde nurse who seems more suspicious than she is. Cooper was quite a beauty, as well as a magnetic performer, and it’s a treat to see her early work.

What are the five (or 5) steps to danger? Who knows? The title seems to have no relation to the plot, but then again, the plot has no relation to reality, so maybe it’s fitting. Bottom line: If you like fast-paced thrillers with a topical angle and you like the two stars, you’ll get a kick out of this 1950s curio. Maybe after watching 5 Steps to Danger, you can play Six Degrees of Separation and call it a night.

ClassicFlix offers up another stellar transfer of a little-known independent film. Presented in its original widescreen aspect ratio of 1.85:1 and restored from the original camera negative, the 1080p/AVC MPEG-4 rendering looks crisp and vibrant, and the surprisingly clean source material makes viewing a pleasure. A healthy grain structure maintains the movie’s film-like feel and supplies necessary texture, while a nicely varied gray scale heightens detail levels and enhances depth. Blacks are rich, Roman’s white dress is well defined, and shadow delineation is quite good. Background elements are easy to discern and sharp close-ups highlight Roman’s glamor and Hayden’s ruggedness. Though one scene exhibits a fair amount of print damage and some stray nicks and marks dot others, the overall presentation exceeds expectations.

The DTS-HD Master Audio mono track sounds a little muffled at times, but fidelity and dynamic range are generally good. The musical score fills the room with ease. Effects like gunfire and fisticuffs are distinct, and all the dialogue is well prioritized and easy to understand. No distortion is present and any age-related hiss, pops, and crackle have been erased. Sadly, the disc contains no supplements, not even a trailer. 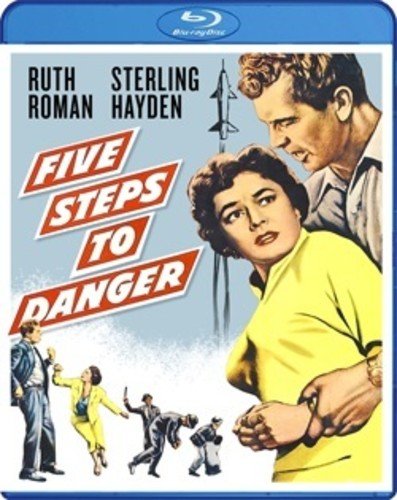