‘3D Dot Game Heroes’ is an incredibly fun game. There’s no getting around that; it’s just plain fun. And of course it is – it’s a ‘Zelda’ clone, and ‘Zelda’ clones are fun. I’m pretty sure it’s one of the fundamental truths of the universe that top-down action games in the style of ‘Link to the Past’ will always be enjoyable.

The game’s got roots in the old school, that much is obvious from the onset. Yet for every wonderful homage and every clever bit of dialog, there’s also something absolutely maddening.

Don’t get me wrong, ‘3D Dot Game Heroes’ is fantastic. It’s a breath of fresh air in an industry so obsessed with being taken seriously that game makers seem to forget 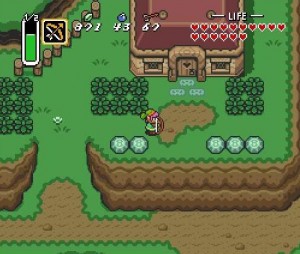 we’re supposed to enjoy the experience of playing their games. But it really seems to drop the ball in moving the genre forward.

There are some wonderful touches, like being given the option of saying no to a king who’s asking you to save the world, only to be looped back through the conversation until you finally say yes. Then there’s the awful stuff, like the pinging sound when you get down to low health. If that was annoying back in 1992, it’s even worse now.

You can save the game, which should really go without saying these days. But there’s no auto-save. You’d think the game would save itself when you stay at an inn and reset your spawn point, but you’d be wrong. You’ve got to go into the main menu and save. Imagine my surprise when I realized that one for the first time. Sure, not every game has an auto-save feature, but most do.

It’s also got that classic lack of direction that made NES games so frustrating and strategy guides so necessary. I know there are people that clamor for the punishment of figuring everything out on their own. I’m just not one of them. If I, an avid game player all my life (except for that year or two when my mental faculties hadn’t yet developed) have to spend a half hour wandering around, hoping to stumble upon the next village because the only direction I’ve got is “Go west,” that’s a problem.

It’s like the developers decided that they didn’t just want to bring back the good parts of classic games, but the bad ones as well.