Some message films lose their sting as the years pass, but A Patch of Blue isn’t one of them. This touching, beautifully mounted movie still has something very powerful to say about racial tolerance and human understanding. It’s just a shame we haven’t yet learned its lessons.

A Patch of Blue

No matter how much progress we make, racial tensions never seem to go away, and these days, increasingly intolerant government policies and one man’s itchy Twitter fingers seem to fan the flames of bigotry and prejudice on an almost daily basis. As a result, A Patch of Blue, which should remind us how bad things were and how far we’ve come since the turbulent racial unrest of the 1960s, remains disturbingly and depressingly relevant in our current day and age. Thankfully, director Guy Green’s alternately agonizing and uplifting 1965 adaptation of Elizabeth Kata’s novel gives us hope that harmony is possible, even if it has to happen one person at a time. All we have to do is close our eyes.

Color blindness is a term that’s often bandied about when we talk about race. It’s a tired cliché, but A Patch of Blue may well have helped coin the phrase. Nevertheless, the film puts a clever twist on the idea in its effort to hammer home the trite but always powerful point that we’re all the same on the inside and it’s our souls, not the irrelevant shades of our respective skins, that determine who we are as human beings. Such a preachy message could be off-putting, even repellant, in the wrong hands, but Green tells his tale with such tenderness and truth, his movie makes an indelible impression.

Selina D’Arcey (Elizabeth Hartman) is a sensitive, sheltered, insecure young blind woman who’s kept like a prisoner and treated like a slave. Her monstrous mother, Rose-Ann (Shelley Winters), is a resentful, selfish harridan who watches Selina like a hawk and browbeats her with alarming regularity. Rose-Ann is also an occasional prostitute, and during a scuffle with one of her tricks years ago, an accident ensued that left the five-year-old Selina blind. Selina’s bedraggled, alcoholic grandfather, Ole Pa (Wallace Ford), lives with her and Rose-Ann in a cramped tenement apartment, where Selina cooks and cleans like Cinderella. Though Ole Pa expresses a modicum of sympathy for his granddaughter’s plight and occasionally tries to stand up to Rose-Ann, liquor remains his top priority.

Selina’s personal refuge is the local park, a place where she can enjoy fresh air and spend hours stringing beaded necklaces that Rose-Ann sells for extra income. Though she enjoys the peace and solitude, Selina is unable to handle any events beyond her very limited control. One day, she meets Gordon Raife (Sidney Poitier), a passerby who tenderly interacts with her. Gordon is drawn to Selina, and for the first time in her life someone takes a genuine, unselfish interest in her. Gordon becomes Selina’s first and only friend, and as they spend more time together, she becomes deeply attached to him.

Of course, Selina’s blindness prevents her from seeing what many in the mid-1960s might perceive as Gordon’s distinguishing feature: He’s a black man. Gordon withholds that vital piece of information, too… but is it really vital? Gordon thinks so, and so does his brother Mark (Ivan Dixon), because they know how society would look upon a racially mixed relationship, especially if it blossoms into love. Gordon also believes that Selina, who is woefully uneducated and painfully naïve, would not be able to handle such a difficult and delicate issue. Worse are Rose-Ann’s bigotry and jealousy, as well as her plan to move into a new apartment, where she’s determined to introduce Selina to her tawdry trade.

Selina is blissfully unaware of these potential problems. She can’t see Gordon’s face, but she can see the qualities that radiate beneath his skin – kindness, empathy, strength, commitment, and courage. He’s her knight in shining armor, her champion, and like a valiant prince in a fairy tale, he’s determined to free her from her evil mother’s clutches and make sure she gets the education and training she deserves. Gordon’s goal is to help Selina become a self-sufficient woman capable of living on her own and making her own choices… and that includes choosing who to love.

The film’s simple yet profound human message surely wielded plenty of impact back in 1965, a watershed year in the Civil Rights movement that saw the assassination of Malcolm X, the historic Selma marches, and the violent Watts riots in Los Angeles. The sad thing is I’m sure it resonates almost as strongly today. As inflammatory rhetoric pervades our society and terms like white supremacy and racial discrimination continue to rear their ugly heads, a sweet, forthright film like A Patch of Blue can help heal the divide by emphasizing our inherent, unmistakable similarities instead of spotlighting our differences. Green seems to sense this, and wisely foregoes preachy speeches in favor of understated actions that convey the story’s potent themes and visceral emotions with subtle grace.

Though the love between Selina and Gordon is more spiritual than physical, which probably made it more palatable to audiences of the period (except in the South, where the kisses between the two were deleted from the release prints), it’s no less powerful. Two years later, Guess Who’s Coming to Dinner? would provoke far more controversy, because it took interracial love to a higher plane by raising the prospect of marriage. A Patch of Blue is more delicate and, yes, tame in its presentation, but though it speaks softly, it carries – to quote Teddy Roosevelt – a big stick.

Green beautifully, and frighteningly, immerses us in Selina’s world, depicting the fear, disorientation, insecurity, and helplessness that constantly plague her. He also starkly shows how she’s a victim of prejudice too, both in her own family and among the general populace, which so often looks past disabled people, ignores their needs, and makes them feel invisible and inferior. Unlike others, Gordon is drawn to Selina and treats her like anyone else, which is exactly the way she treats him. She can’t see what others see when she looks at him, and he refuses to see what others see when he looks at her. If only all relationships could be so pure.

Playing a blind person believably is never easy, but Hartman embodies her character and files a revelatory performance in her film debut. Fragile yet resilient, meek yet bold, Hartman conveys all of Selina’s complexities in a natural, unassuming manner, and her luminous, often heartbreaking portrayal earned her a Golden Globe Award and Best Actress Oscar nomination. Sadly, despite some other fine work, her career never really took off, and in 1987 at the age of 43, a despondent Hartman committed suicide by jumping out of her fifth story apartment window in Pittsburgh.

Poitier, as always, shines, but he’s particularly affable and unaffected here. His part isn’t showy, but he’s still a formidable presence, projecting quiet strength and limitless compassion. His easygoing air masks the staunch convictions that drive him to help Selina take control of her life and realize her potential, despite the risks and potential backlash. Winters won her second Best Supporting Actress Oscar for a role she reportedly disliked intensely, and who can blame her? The blowsy, nasty, vindictive shrew she portrays doesn’t possess a single redeeming quality, yet Winters doesn’t shrink from embracing all of her horrific faults. We may hate Rose-Ann, but it’s impossible not to love Winters’ excellent work.

A Patch of Blue is no longer groundbreaking, thank goodness, but the fact that it still hits home more than 50 years after its initial release is a shame. We should have come farther faster, and we shouldn’t be where we are now. Social change takes time – often too much time – but hopefully revisiting this classic film will help remind us that’s it’s not what we look like, but who we are inside that matters. That may sound like a platitude, but it’s one worth repeating. Maybe we should all walk a mile in Selina’s shoes and see where they take us.

Warner Archive once again provides a stellar transfer of a classic film. The 1080p/AVC MPEG-4 rendering, presented in the film’s original aspect ratio of 2.35:1, honors Robert Burks’ Oscar-nominated cinematography as it sports excellent clarity, contrast, and gray scale. Evident but well-integrated grain lends the image a distinct film-like feeling, and no nicks, marks, or scratches mar the pristine source material. Deep black levels, bright whites, detailed close-ups, and fine shadow delineation all combine to produce a pleasing picture that allows our attention to remain where it belongs – on the characters and story.

The DTS-HD 2.0 mono soundtrack supplies clear, well-modulated sound. Jerry Goldsmith’s syncopated score is especially crisp and full-bodied, and all the dialogue is easy to comprehend. Best of all, no hiss, pops, or crackle intrude. The only extras are an audio commentary by director Guy Green, a vintage featurette that heralds the arrival of Elizabeth Hartman on the Hollywood scene, and the film’s original theatrical trailer. 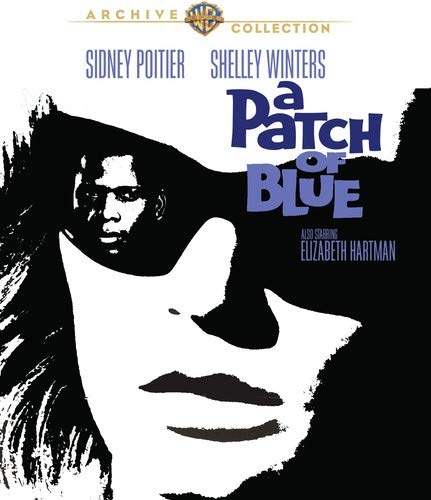 A Patch of Blue – Buy the Blu-ray at Amazon