Amnesia films have been around for as long as I can remember. (OK, I couldn’t resist making that bad pun, but it really is the truth.) From Hollywood’s Golden Age to the CGI world of today, memory loss movies have captivated audiences, no matter how far-fetched and ludicrous their plots may seem. They also span many genres, from film noir (Memento) and high-tech action (the Bourne movies) to comedy (While You Were Sleeping, Overboard), tear-jerking romance (Random Harvest), and gothic horror (Angel Heart, Shutter Island). Strangely enough, discussions of Hollywood’s great amnesia films rarely include Mirage, director Edward Dmytryk’s stylish, clever, and involving tale of one man’s struggle to piece together his fractured existence. With a stellar cast headlined by Gregory Peck and an intricate story peppered with Cold War intrigue, Mirage grabs us from its opening frames and doesn’t relinquish its grip until the final fadeout.

As the film opens, a blackout shrouds a high-rise New York City office building in darkness. David Stillwell (Peck), a mild-mannered accountant, tries to navigate the pitch-black stairwells and escape to the lobby below, but he’s accosted by Shela (Diane Baker), a mysterious woman who seems to know him. He doesn’t recognize her, and when they reach the street level she disappears. Moments before, Charles Calvin (Walter Abel), a bigwig executive, tumbles out of one of the building’s upper story windows. The police label his death a suicide, but the reason behind his rash act remains unclear. As private detective Ted Caselle (Walter Matthau) tells David later in the film, “Your nightmare began at almost the exact moment his ended.”

David soon begins to believe pieces of his life are missing. His neighborhood bartender looks at him as if he’s a stranger. His doorman says he hasn’t seen him for a long while, and yet David doesn’t remember being away. When he phones a business associate, David dials a number that hasn’t been in service for quite some time. Things really get weird when a strange man (Jack Weston) threatens to kill him if he doesn’t immediately board a plane to Barbados with his briefcase in tow. Baffled by the outrageous demand, David refuses. He then attacks his assailant, knocks him out cold, and embarks on a frantic quest to fill in the cavernous blanks of his existence. Along the way he evades an army of assassins and, against his better judgment, finds himself falling for the irresistible Shela, who keeps popping up unexpectedly and is either his guardian angel or a deadly femme fatale.

Based on a novel by the prolific Howard Fast (written under a pseudonym), Mirage is tightly constructed, slickly shot (much of the movie was filmed on location in New York City), and moves at a brisk clip. One of its best assets is the clever, tongue-in-cheek script written by Peter Stone, who penned the screenplay for the equally elegant and much more renowned Charade two years earlier. (A few years later, he would also write the original book for the Broadway musical 1776 and subsequently adapt it for the screen.) The same combination of espionage, thrills, romance, and deliciously witty repartee that define Charade distinguish Mirage, which also brims with Hitchcockian overtones and never takes itself too seriously… until it has to. Having watched Mirage twice in succession for this review, I actually think its script is better than the Charade screenplay. All its splintered puzzle pieces snugly interlock and Stone supplies several inspired dialogue exchanges that simultaneously advance the plot, define characters, provoke laughter, and earn the admiration of wordsmiths like me. Great scripts are all too rare, and I’m surprised this one didn’t nab Stone an Oscar nod.

The perfectly cast Peck did the memory loss thing twenty years before to great effect in Alfred Hitchcock’s Spellbound alongside Ingrid Bergman, but his rumpled, middle-aged demeanor here lends his portrayal a heightened sense of urgency and bewilderment. In Spellbound, Peck was anguished; in Mirage, he’s angry, and that simmering ire mixed with his trademark stoicism fuels a finely etched, earnest, and affecting performance. Peck is in almost every shot of the movie, and his strong presence keeps us transfixed.

Rumor has it that Dmytryk wanted Tippi Hedren to portray Shela, but she was under personal contract to Hitchcock, who refused to release her. Leslie Caron also claims that she was offered the role, but her boyfriend at the time, Warren Beatty, convinced her to turn it down. While both actresses certainly would have done the part justice, I can’t imagine either of them eclipsing Baker, who brings panache, grace, sincerity, and most importantly intelligence to the movie’s most cryptic character. Baker recalls Eva Marie Saint in North by Northwest with her cool yet passionate portrayal, and she creates excellent chemistry with the standoffish Peck, who’s not always an easy actor to connect with. The best performers aren’t always the flashiest, and though Baker often flies under the radar in her films and allows herself to be overshadowed by bolder personalities, her potent talent is difficult to ignore. Mirage offers one of her finest roles, and she makes the most of the opportunity.

The supporting cast is top-notch, too. Matthau is pitch-perfect as the affable yet green private eye who finds more trouble than he bargains for, while Kevin McCarthy of Invasion of the Body Snatchers shines as a sycophantic, teflon corporate yes-man. As the bloodthirsty hitmen who won’t leave Peck alone, Weston and George Kennedy craft compelling characterizations, and Leif Erickson and Walter Abel make potent impressions in pivotal parts despite brief screen time.

Dmytryk was a fine director in his day, even if he’s never mentioned in the same breath with the giants of his field. As one of the notorious Hollywood Ten (a group of film industry professionals who refused to cooperate with the House UnAmerican Activities Committee during the Red Scare of the late 1940s and early 1950s), he served several months in prison before agreeing to testify and name names in the hope of exposing the insidious nature of the Communist Party. The controversial act resuscitated Dmytryk’s career (sadly at the expense of others) and he went on to direct a number of big-budget films, including The Caine Mutiny, Raintree County, and The Young Lions. Perhaps his political experiences help infuse Mirage with its palpable sense of desperation, paranoia, and confusion as it chronicles a character who has lost control of his life and is being played like a pawn in a chess game. Though Dmytryk is no Hitchcock, he creates and sustains tension with aplomb (the harrowing climax just might have influenced The Deer Hunter) and tells a complex tale with authority, confidence, and an understated artistry that often doesn’t get the credit it deserves.

Mirage doesn’t get enough credit either. This masterful mishmash of suspense, intrigue, comedy, and romance also has a dash of substance. During its final minutes, the film not-so-subtly indicts big corporations and the greedy, power-hungry people who pursue progress and their own personal interest at the expense of humanity. While the plot point surrounding that cautionary Cold War message may be a tad fantastical, the ideas ring true and most definitely hold up today – just one more reason why Mirage stands as one of the best and most underrated thrillers of the 1960s. A garden-variety amnesia movie it is not. On the contrary, it’s a very memorable motion picture. Though its title denotes seeing something that doesn’t exist, Mirage actually delivers much more than meets the eye.

Kino provides a vibrant, often striking 1080p/AVC MPEG-4 transfer for Mirage that’s distinguished by excellent clarity, contrast, and grayscale. Although the opening blackout sequence and all the flashbacks that recall those scenes appear quite rough and grainy (undoubtedly a symptom of low-light shooting at that time), the rest of the film, which is presented in its original aspect ratio of 1.85:1, looks quite good. Close-ups, especially those of a sweat-drenched Peck at the climax, are crisp and detailed, while Baker is often lovingly photographed by cinematographer Joseph MacDonald. Lush black levels and bright whites nicely balance the image, and the extensive New York City location scenes seamlessly blend with soundstage interiors to produce a fluid, involving visual experience. A bit of artificial sharpening may have been applied here and there, and a few errant specks dot the source material, but overall, Mirage is a winner on Blu-ray.

The best disc extra is a substantive, 14-minute interview with actress Diane Baker, who still looks quite beautiful at age 81. Among other things, she discusses how she was cast, explains her philosophy of acting, and shares her impressions of Peck, Matthau, and McCarthy. She also compares and contrasts the directing styles of Dmytryk and Hitchcock, with whom she worked the previous year on Marnie. There’s also an audio commentary with film historians Howard S. Berger, Steve Mitchell, and Nathaniel Thompson; an eight-minute animated image gallery that contains dozens of black-and-white and color publicity portraits, scene stills, and reproductions of promotional materials; a theatrical trailer; and previews for other Kino releases featuring Peck, Matthau, and others. 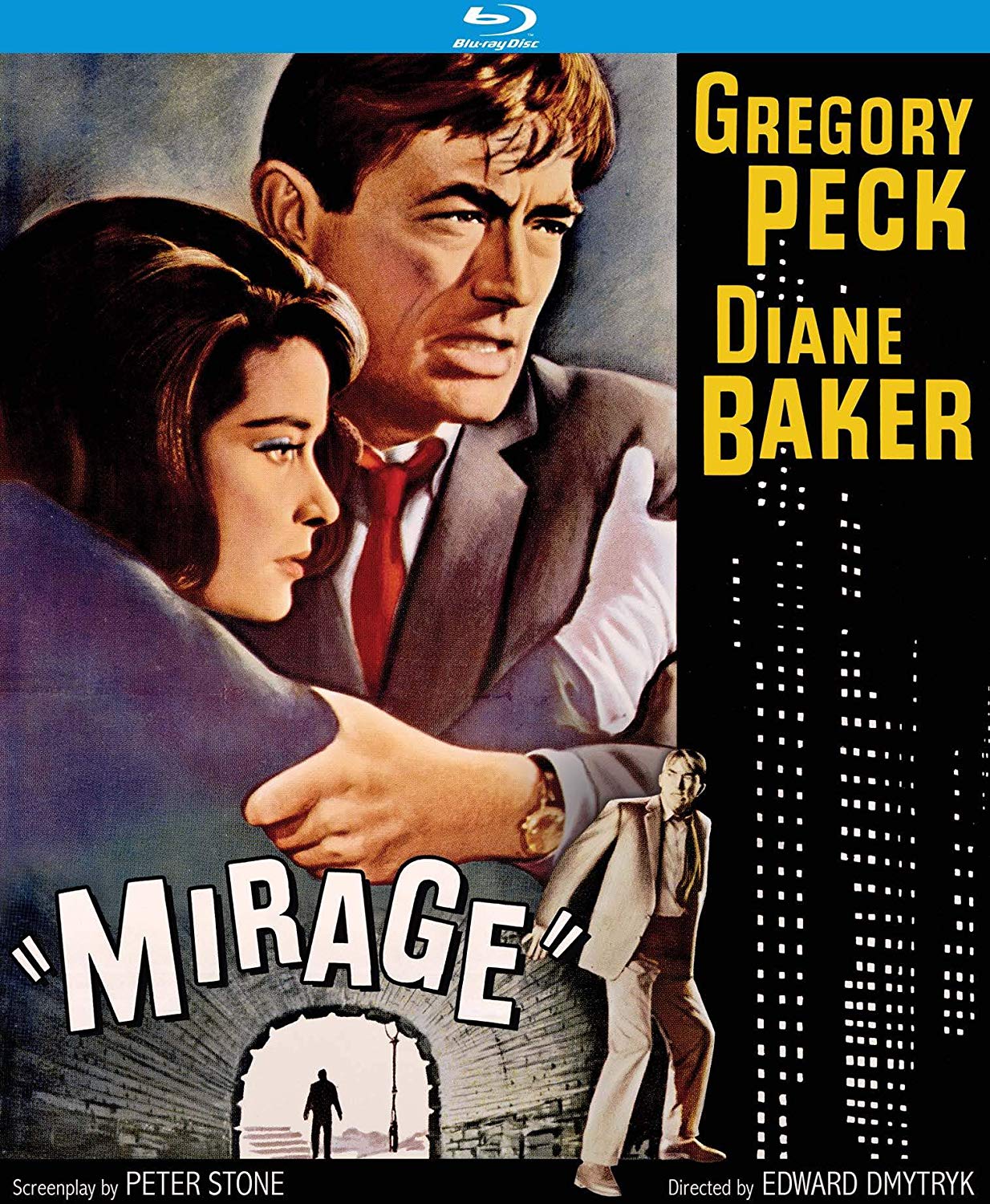