If you’re a fan of Raging Bull and Rocky, you’ve got to check out The Set-Up. This exciting yet poetic boxing yarn from director Robert Wise packs a powerful punch and remains a giant of the genre.

Boxing movies are a dime a dozen, but their universal and durable appeal over several decades stems not just from the thrilling, action-packed entertainment they so often provide. The best prizefight films are metaphors for life’s hard knocks, with the trials inside the ring reflecting the challenges we all face in our daily lives. Who can’t relate to the gallery of beaten down cinematic characters who struggle to get up off the mat and battle back after life deals them a series of devastating blows? Just like you and me, these flawed, bruised, but ever optimistic losers long to prove themselves and grab one shining moment of glory, even if it means getting repeatedly pummeled during the pursuit. Those who revile violence still can be drawn to this gritty milieu, because we know what it’s like to take on the system, stand up for our principles, and compete for one of life’s brass rings. The fights we fight may not be winnable, but they’re unavoidable, and after we survive one punishing round, we go out for another and another, always hoping to land that elusive knockout blow.

Few boxing films convey this metaphor or depict the sport’s grimy underbelly with more raw, soulful beauty than The Set-Up, director Robert Wise’s brief yet blistering tale of a fixed prizefight gone bad. Clocking in at just 72 minutes, this rough yet deeply emotional picture adopts a poetic tone, which isn’t surprising because the movie is based on an actual poem by Joseph Moncure March. With its fatalistic themes, nocturnal cityscape, and criminal overtones, it’s easy to classify The Set-Up as a film noir, but if you’re expecting snappy dialogue, a twisty plot, a femme fatale, flurries of gunfire, and a hefty body count, you’ll be disappointed. This is measured, methodical, intimate moviemaking at its very best. On its surface, The Set-Up exudes bravado, but a heartbreaking softer side simmers underneath, as Wise provides a window into the souls of even peripheral characters, a choice that lends this lean, mean movie a lasting resonance.

Dialogue is sparse. I’m not sure The Set-Up even needs any talk. Wise is such a fine storyteller, he could have made it as a silent movie, so expressive are his actors and so evocative are the myriad reaction shots sprinkled throughout. Without words, we know what the characters are thinking and feeling at almost every moment. On the rare occasions when ambiguity creeps in, Wise lets us make up our own minds about motivations and actions. The story may be simple, but that doesn’t diminish its impact. On the contrary, the minimal plot allows Wise to amplify small moments. Like the best fighters, the narrative doesn’t come out swinging; it percolates slowly, quietly building in intensity, then unloading with a burst of fury.

Stoker Thompson (Robert Ryan) is an over-the-hill, small-time fighter who foolishly clings to his youthful dreams. At 35, he’s an old man by boxing standards, but the fire still burns within him. He truly believes he’s just “one punch away” from breaking into the big time, but his fed-up wife, Julie (Audrey Totter), only wants peace. “Maybe you can go on taking the beatings,” she tells him. “I can’t.” Concerned for his health and safety and tired of bouncing from two-bit town to two-bit town, Julie pleads with Stoker to give up fighting, but the allure of the ring and the one-in-a-million promise it holds for a better life keep drawing him back.

This particular night, Stoker is scheduled to fight 23-year-old Tiger Nelson (Hal Baylor), a brash up-and-comer managed by Little Boy (Alan Baxter), a ruthless racketeer who has big plans for his baby-faced protégé. Considering Stoker’s dismal recent record and advanced age, everyone thinks Tiger will have his way with him, including Stoker’s sleazy, money-grubbing manager, Tiny (George Tobias). Just to make sure, Little Boy plans a set-up. Tiger and Stoker will spar for two rounds, then Tiger gets the green light to take Stoker down. Tiny seals the deal and accepts the $50 payoff, but doesn’t tell Stoker about the set-up because he’s so sure he’ll lose anyway and he doesn’t want to share the dough. Stoker, however, has something to prove – to himself, to his wife, and to the world – and on this fateful night he feels good about his chances for victory. As he enters the ring, he’s focused and ready, but little does he know that winning this small-time bout might have far bigger and more devastating consequences than losing.

The Set-Up is possibly the first film to use the real-time format to tell its story. Much like High Noon a few years later and the popular TV series 24, the movie transpires minute for minute in our midst. The style adds an edgy unpredictability to this no-frills, tightly plotted tale, and lends the film a more immediate, realistic feel, especially during the fight between Stoker and Tiger. Each round seems interminable by movie standards because we’re seeing every second of it. Wise doesn’t coddle us with quick edits or indulge limited attention spans with a highlight reel. He lets us see and experience it all, as if we’re sitting with the other spectators in the arena. There are cutaways to show crowd reactions and some brief dramatic interplays, but we watch the fight unfold as it happens. Because we’ve become so attached to Stoker, the stakes seem higher and we hang on every punch.

Wise also constructs a dingy, seedy, dead-end cityscape that traps the characters and flies in the face of such optimistic signs heralding the Paradise City arena and Dreamland dance hall. Such establishments promise hope, fantasy, and escape, but there’s no exit from the despair of the unforgiving street. The cramped dressing room where the boxers gather to gird their loins for their upcoming battles and share some awkward camaraderie provides an up-close-and-personal look at the fear, dread, false hopes, starry-eyed dreams, and arrogant swaggers that a variety of fighters who span different races, ethnic backgrounds, and ages all project. One by one, they leave the convivial room and, like lambs to the slaughter, take their turn in the ring. When they return, they’re either euphorically triumphant or beaten to a pulp. The gruff yet caring Gus (the always marvelous Wallace Ford) tends to them as best he can, but it’s a difficult and thankless job. Many of these colorful characters only have a moment or two of screen time, but they all make indelible impressions.

So, too, do a smattering of spectators, some of whom don’t have a single line. We see the fight through their eyes, and their reactions reflect a disturbing sadistic fervor that’s reminiscent of bloodthirsty Romans watching lions maul the Christians in the Colosseum. Whether obnoxious, disgusted, wild-eyed, or blasé, they all crave action, violence, and thrills as they watch two grown men try to tear each other to pieces. “Kill him!” is the cathartic cry from a mild-mannered matron who at last allows her pent-up aggressions to burst free. The others may not express themselves so vehemently, but they harbor similar feelings. They paid for their tickets with hard-earned cash, and they want their money’s worth.

Much like Brando, Clift, and Dean, Ryan is a soulful performer who speaks softly and acts with his whole body. He also boxed during college (winning four collegiate titles), which lends his understated, deeply affecting portrayal essential authenticity. Reportedly, Stoker was Ryan’s all-time favorite role and he inhabits it completely. His priceless close-ups and reaction shots convey a multitude of emotions and provide vital character shadings. Totter also excels in a difficult part. It’s tough to play a supportive yet restless wife, especially when you’re usually cast as a conniving femme fatale, but Totter rises to the challenge, especially when she aimlessly wanders the city streets in a vain attempt to come to terms with her crumbling life. She barely utters a word, but her subtle, often luminous facial expressions speak volumes. Both Ryan and Totter are exceptional actors, and though both are highly regarded, during their lifetime they never really got the acclaim they so richly deserved.

The same can be said of The Set-Up. Who knows if we’d ever have Raging Bull or Rocky without it. Wise’s dark, bruising, but ultimately hopeful movie influenced Scorsese’s style and Stallone’s narrative. While those iconic motion pictures may now overshadow The Set-Up, they will never eclipse it. With grace, artistry, and most importantly truth, this memorable slice-of-life portrait exposes boxing corruption as it searingly depicts the physical and emotional toll the sport exacts on the noble warriors who risk life and limb for very little reward. The Set-Up is not just a great boxing film; it’s a great film, period.

Presented in its original aspect ratio of 1:37.1, The Set-Up arrives on Blu-ray sporting a marvelously detailed, organic 1080p/AVC MPEG-4 transfer that thrusts us into the movie’s gritty atmosphere. Grain is evident, but it layers the image with essential texture and lends this digital rendering a wonderful film-like appearance. Rich blacks enhance the impact of Milton Krasner’s nocturnal photography, while the harsh glare of artificial light nicely highlights the seedy locales and stark, unforgiving boxing ring. Shadow delineation is excellent and all the pensive close-ups are sharp. A few scenes err slightly on the soft side, but the source material is clean and free of any intrusive nicks, dirt, or scratches. The Set-Up is another in a string of superior film noir transfers from Warner Archive that honor and preserve this captivating, timeless genre.

The DTS-HD Master Audio 2.0 mono track supplies clear, well-modulated sound. The film contains no musical score, only incidental music, so the sounds of the city and boxing arena really spring to the forefront. Whether it’s the rowdy cheering and booing of the spectators, the din of an arcade or diner, the rumble of a trolley car, the sizzle of a hamburger on the grill, a squeaky door, or the faint ticking of a clock, all the ambient effects are distinct yet balanced. Dialogue is easy to comprehend (but there isn’t a whole lot of it), distortion is absent, and any age-related hiss, pops, or crackle have been erased.

The only supplement is a 2004 audio commentary featuring director Robert Wise and one of the film’s most ardent champions, Martin Scorsese. Sadly, their remarks were recorded separately (how wonderful it would have been to hear these two discuss the movie together in the same studio!), but that doesn’t diminish the track’s quality. Wise provides nuts-and-bolts information about the film’s production and talks about his creative intent, while Scorsese puts the movie in a larger context, discussing its style, influence, and his personal connection to it. Hearing these two legends analyze this top-notch motion picture is a real treat and well worth 72 minutes of your time. 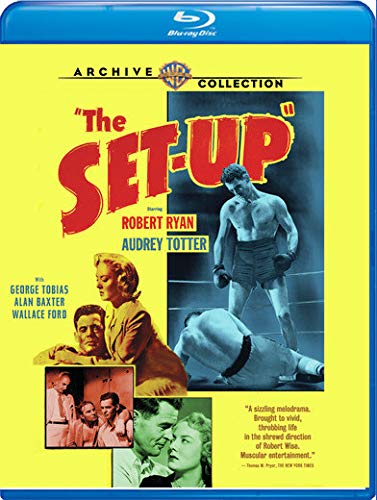 The Set-Up Blu-ray – Buy at Amazon