Alfred Hitchcock’s third sound film lacks the ingenuity of his first (Blackmail), but Murder!, despite its unnecessary exclamation point, features a slam-bang finish that pumps up the appeal of this static, talky mystery.

Imagine this… What if the lone holdout juror played by Henry Fonda in 12 Angry Men caved under the relentless pressure of his rush-to-judgment colleagues and voted guilty on the first ballot, then regretted his hasty decision after the defendant was convicted and sentenced to death? In a nutshell, that’s the premise of Murder!, an early Alfred Hitchcock whodunit that clearly puts the talk in talkie. This verbose adaptation of a play by Clemence Dane and Helen Simpson flirts with provocative themes, but possesses little of the flair we expect from the Master of Suspense. Often static and sluggish, the meandering mystery doesn’t pick up steam until the last couple of reels, and even one of Hitchcock’s breathtaking climaxes can’t quite salvage it.

The instantly identifiable and highly dramatic first notes of Beethoven’s Fifth Symphony (“da-da-da-DUM”) play over the movie’s credits and promise far more tension and horror than the plot ultimately delivers. Hitchcock, however, fires a potent opening salvo. He begins Murder! with a startling, piercing scream that’s followed by the discovery of Edna Druce’s dead body lying on the floor of her modest flat with a bloodied fireplace poker by her side. Inches away sits Diana (Norah Baring) in a catatonic stupor. We soon learn that Diana and Edna performed in the same rural theater troupe and intensely disliked each other. Mutual jealousy and distrust poisoned their relationship, and Diana’s hot temper made her prone to angry outbursts.

With no evidence pointing to anyone else, the police charge Diana with the crime, and her inability to remember anything that happened that evening leads her to believe she may in fact be guilty. Sir John Menier (Herbert Marshall), an esteemed London actor, sits on the jury at her trial and has an inkling that she might be falsely accused, but his rabid fellow jurors strike down his theories and pressure him to vote for conviction. After Diana is found guilty and sent to the gallows, Sir John rues his decision and wishes that he’d fought more vigorously for acquittal. He vows to investigate the case himself before Diana is put to death, and enlists the assistance of two members of her theatrical company to help him. The resourceful amateur sleuths uncover some notable clues, then use their thespian talents to trap the prime suspect, who harbors a dark secret that just might have spurred him to commit murder.

Whodunits were never Hitchcock’s bag. He made a couple of them during his long career, but they always dissatisfied him. Hitchcock always believed more suspense resulted from identifying a story’s villain early on, and it’s hard to disagree with him. As evidenced here, detective work is a bit of a drag. It’s not particularly cinematic and requires lots of information to be conveyed through dialogue, which isn’t Hitchcock’s strong suit either. As a result, visual artistry comes at a premium in Murder!. A few creative camera angles and set-ups remind us that we’re watching a Hitchcock film, but most of this ho-hum mystery is shot in a straightforward, unimaginative manner. It’s not until the flashy circus climax, replete with bejeweled elephants, a transvestite trapeze artist, and a sea of enraptured spectators who morph into a frantic mob, that Hitchcock puts his personal stamp on the material. Dizzying camera sweeps, superimposed images, and ever-increasing tension culminating in a horrifying act distinguish the hypnotic sequence and almost make slogging through the dull narrative that precedes it worthwhile.

It would be easy to blame the script for the picture’s ennui, but in this instance that’s also Hitchcock’s domain. He co-adapted the play, and his wife, Alma Reville, is credited with the “scenario.” While Hitchcock does his best to open Murder! up for the screen, his options are fairly limited. A few taboo themes – latent homosexuality, cross-dressing, and racial impurity – spice up the narrative, but aren’t explored fully enough to make a big impact or alleviate the film’s maddening inertia.

Like Hitchcock’s first talkie (Blackmail), Murder! is noteworthy from an audio standpoint in that it’s the first film to let viewers hear a character’s private thoughts. When Sir John is shaving in his bathroom the morning after the verdict, he listens to a radio report about the trial, then to the beginning of a symphonic concert. All the while, he stares in the mirror and ruminates in his head about his decision to vote guilty, Diana’s innocence, and his burning desire to find the real killer. Today, such a scene would be a cinch to engineer, but in the early days of motion picture sound, it posed immense challenges. Overdubbing had not yet been invented, so to achieve the desired effect, Hitchcock had Marshall record his speech in advance, then engaged a 30-piece orchestra to come to the set and perform the music selection live off-camera, so that it would seem as if it was emanating from the radio. As Marshall shaved and the orchestra performed, Hitchcock then played back Marshall’s recording so the on-set microphone could pick up his thoughts along with the music and any incidental bathroom sounds. It’s hard to believe something we now take for granted was once such a big deal and an innovative technological feat.

Murder! was only Marshall’s third movie (his extensive stage experience made him a prime candidate for talking pictures), but the 40-year-old actor never seems ill at ease. His understated style, debonair demeanor, and mellifluous voice suit the medium, and he files a sincere, believable portrayal. Hitchcock would use the actor again a decade later as the villain in Foreign Correspondent, and almost two decades after that Marshall would appear in two episodes of the Alfred Hitchcock Presents TV series.

Though not one of Hitchcock’s best efforts, Murder! remains an interesting early sound curio. The Master of Suspense may only provide fleeting glimpses of his future genius, but it’s fascinating to watch his talent evolve and develop. A more involving and suspenseful story would have given Hitchcock more to work with, but some provocative issues and a dazzling climax spice up this mystery just enough to make it worth a look.

Some people expect perfect transfers of every film, no matter how old they may be. I’m not one of those people. I’m just happy an 89-year-old movie like Murder! still exists at all, although I of course I want the best possible picture. Kino does a fine job with its 1080p/AVC MPEG-4 rendering considering the elements it had to work with. Does Murder! deserve a complete restoration? Certainly. Is this it? No. The video transfer has some wear and tear, faint scratches, nicks and marks, a few blacked-out and damaged frames, and several rough transitions. Believe it or not, though, the movie is still quite watchable and much of it looks surprisingly spry considering its advanced age. Clarity, contrast, and grayscale are quite good, black levels are deep, whites are bright and stable, and close-ups exhibit plenty of fine detail. Softness comes and goes and some occasional image instability occurs, but that’s to be expected.

The one major discrepancy concerns the film’s aspect ratio. IMDb lists the original aspect ratio as 1.20:1, yet Kino presents Murder! in the standard Academy Ratio of 1.37:1. The image does not appear distorted, although in one shot we can see one of Hitchcock’s legs in the lower left corner of the screen, as the director sits – presumably out of camera range – and watches the scene transpire. I wonder if that faux pas would be visible in the original, narrower aspect ratio.

The audio is a bit problematic, too. It’s no secret that early recording equipment produced harsh, shrill tones and amplified imperfections. Throw British accents into the mix and you really muddy the sonic waters. Unfortunately, aside from a couple moments of dropout, understanding the dialogue in Murder! is the biggest issue afflicting Kino’s DTS-HD Master Audio mono track. Conversations in a quiet room are easy to comprehend, but if there’s ever another element competing with the dialogue, it’s almost impossible to decipher what anyone is saying. Beloved character actress Una O’Connor appears in only one scene, but she’s holding an incessantly crying baby and speaking in a thick Cockney accent. I couldn’t understand a single word she said. Sadly, such instances happen consistently throughout the film. Some scenes are just a cacophony of noise, but again, that’s more a symptom of the primitive recording equipment than an inferior audio transfer. To avoid a frustrating viewing experience, I suggest watching the film with the English subtitles enabled.

A fulsome set of supplements enhance this release. Topping the list is the 1931 German version of Murder!, which Hitchcock also directed. It’s called Mary and it runs about 20 minutes shorter than its British counterpart. The cast, save for two actors, is completely different, but much of the story, style, and shot compositions are the same. The sole narrative difference concerns the murderer’s dark secret, and it’s a mystery why that vital piece of information – which is much more shocking in the British version – was changed. The good news is that the English subtitles alleviate any issues with understanding the dialogue due to the constraints of early sound recording.

A ten-minute alternate ending adds a few brief scenes that supply a bit more exposition, but aren’t essential. More interesting is a 14-minute excerpt from the famous series of interviews French filmmaker François Truffaut conducted with Hitchcock in the early 1960s. The two discuss both the English and German versions of the film. Hitchcock addresses the challenges of directing a movie in another language and the cultural differences that hamper both the process and the final product. He also admits that he doesn’t much like whodunits because they lack emotion. He recalls flirting with and then abandoning improvisation during shooting, and how he was the first director to overdub an actor’s voice to allow the audience to hear a character’s subconscious thoughts. Other extras include a laudatory, subtitled five-minute introduction to Murder! by French film critic Noël Simsolo, an audio commentary by film critic Nick Pinkerton, a contemporary trailer for Murder! and previews for four other Hitchcock Blu-ray releases from Kino. 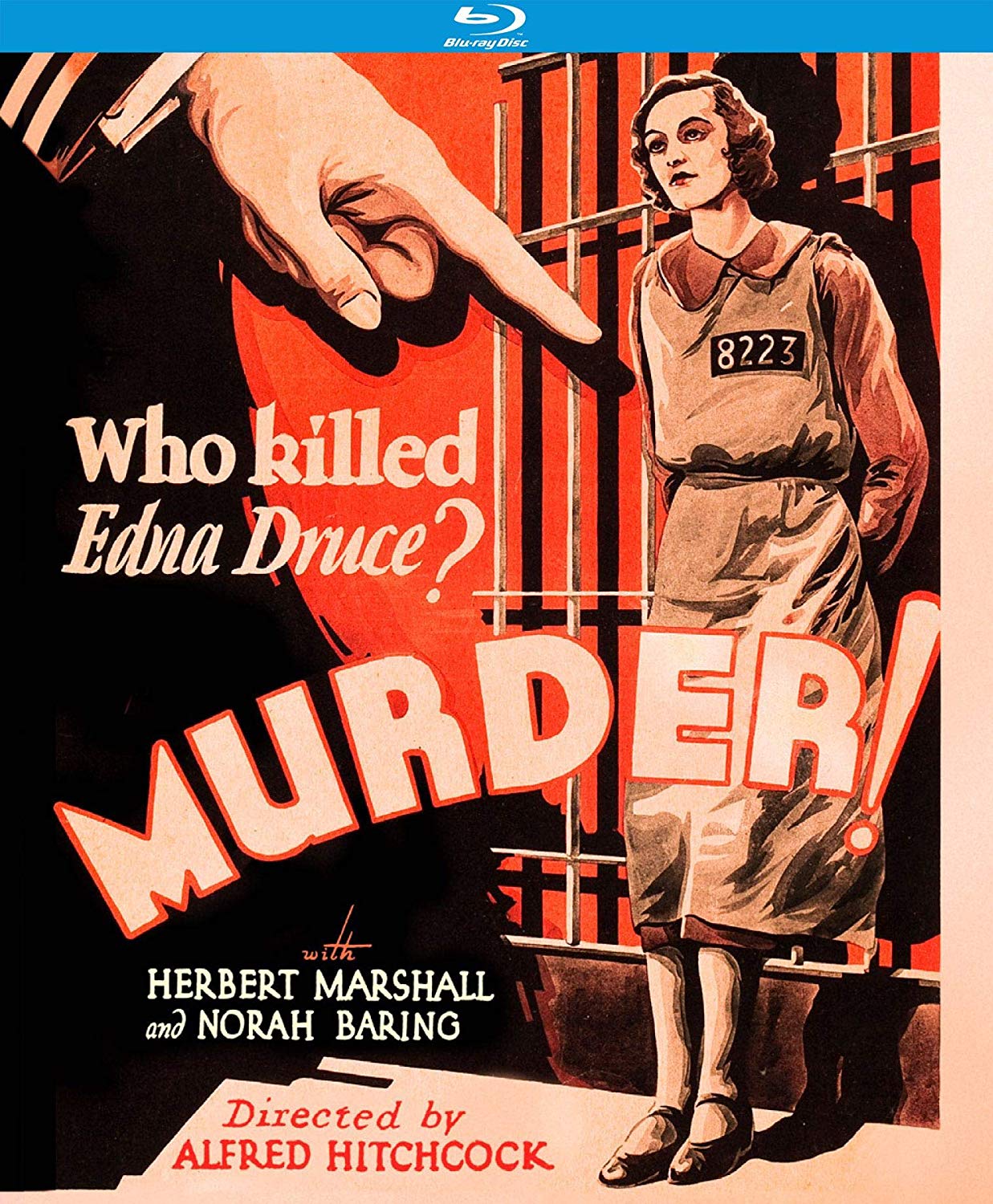 TagsAlfred Hitchcock Blu-ray From Silents to the Seventies Murder! Off the Shelf