For obvious reasons, my home theater has primarily focused on Blu-ray and Ultra HD content, plus cable TV and streaming at a minimum of high definition quality. Even so, I still like to keep older formats around. Recently, I dusted off my old Laserdisc player and hooked it up again.

Laserdisc was the format that first got me into home theater. When I went to college back in the 1990s, VHS was still the standard for watching movies at home. I encountered my first LD player at my work-study job and never looked back. The picture quality on a Laserdisc was significantly better than VHS, and most movies were letterboxed to their original theatrical aspect ratios. Even better, many discs offered cool features like audio commentaries and behind-the-scenes documentaries that were incredibly fascinating and novel innovations a film student like me ate up and couldn’t get enough of.

After college, the purchase of my own first LD player naturally resulted in a need for better equipment to watch the discs on. I bought a bigger TV and my first surround sound system, and my interest in the home theater hobby escalated rapidly.

I was deeply devoted to Laserdisc and resisted the transition to DVD at first. (To be fair, early DVD releases were pretty crappy.) Eventually, of course, the world moved on and so did I. Studios stopped releasing movies on LD and manufacturers stopped making the players. Fortunately, the quality of the DVD format got a lot better too. My first professional writing gig was for the now-defunct DVDFile web site, and by the time I started there, Laserdisc was already well in the rearview mirror. Nevertheless, I kept my player around and continued to collect discs I found interesting. In fact, to ensure that I got the most out of the format, I invested in one of the best Laserdisc players ever made, the Pioneer HLD-X9, a 38-pound beast I imported from Japan for a pretty penny.

The size of the thing and its shiny gold finish made for a very impressive piece of hardware on an equipment rack, and still do. 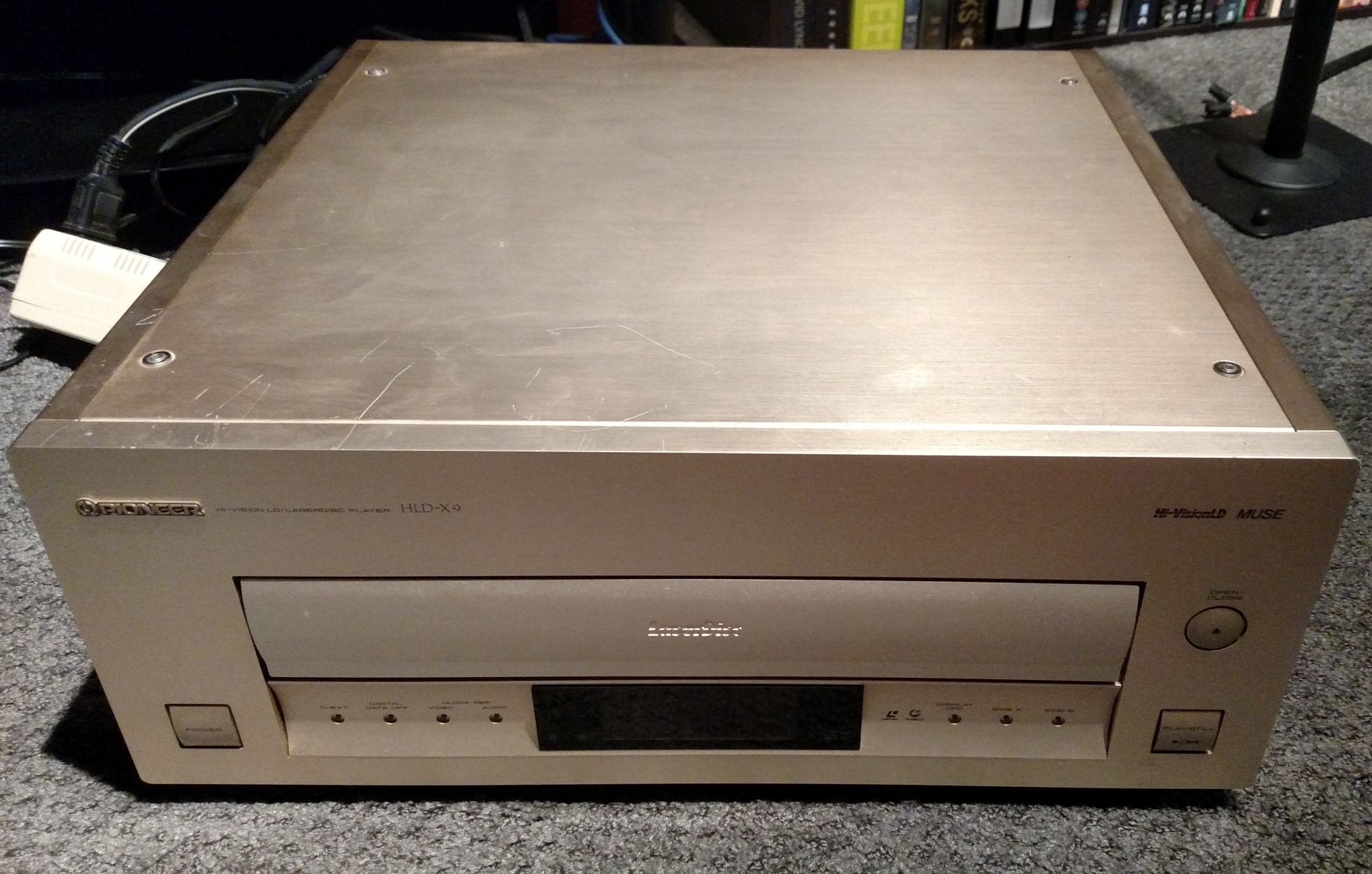 As an analog video format, Laserdisc picture quality could vary wildly with the player used. Entry-level models tended to deliver very soft, noisy images. The more money you spent on a player, the better results you could get. The X9 was notably superior to any LD player released in the United States, and I’ve cherished owning it ever since I bought it.

Sadly, over time, my interest in watching Laserdiscs declined. Once we moved to Blu-ray – much less 4k Ultra HD! – the thought of watching analog standard definition again seemed almost unbearable. Added to that, most of the content I ever owned on LD eventually made its way to digital formats. Even once-exclusive rarities I paid a lot of money to buy on Laserdisc can now easily be found in higher quality on smaller discs or streaming. My beloved HLD-X9 sat unused for a number of years. Although I kept it sitting in my equipment rack, mostly for its impressive visual presentation, the player wasn’t even connected to anything for a very long time.

Getting It Running Again

I’d entertained the thought of connecting the player again from time to time, but it always seemed like such a big project. Laserdisc is simply not a convenient format in any respect, and that includes setting it up. Once I finally made the decision to do it, I had to set aside a good chunk of time.

The biggest issue is the morass of cabling requirements. Nowadays, you can quickly plug in a Blu-ray or UHD player with a power cable and one HDMI cable and be all set to go. Not so with Laserdisc. To take advantage of the format to its fullest, you need:

That AC-3 output has to be plugged into a separate RF demodulator device to extract the Dolby Digital and convert it to a standard form an A/V receiver can decode. The Kenwood demodulator I have makes things marginally more convenient by allowing me to plug both the AC-3 and standard digital outputs into it, where it will auto-switch between them and only take up one input on the receiver.

Further, because the player I have is a Japanese model designed for 100 V electricity (as opposed to 120 V in the U.S.A.), the power cable needs to go into a voltage converter. 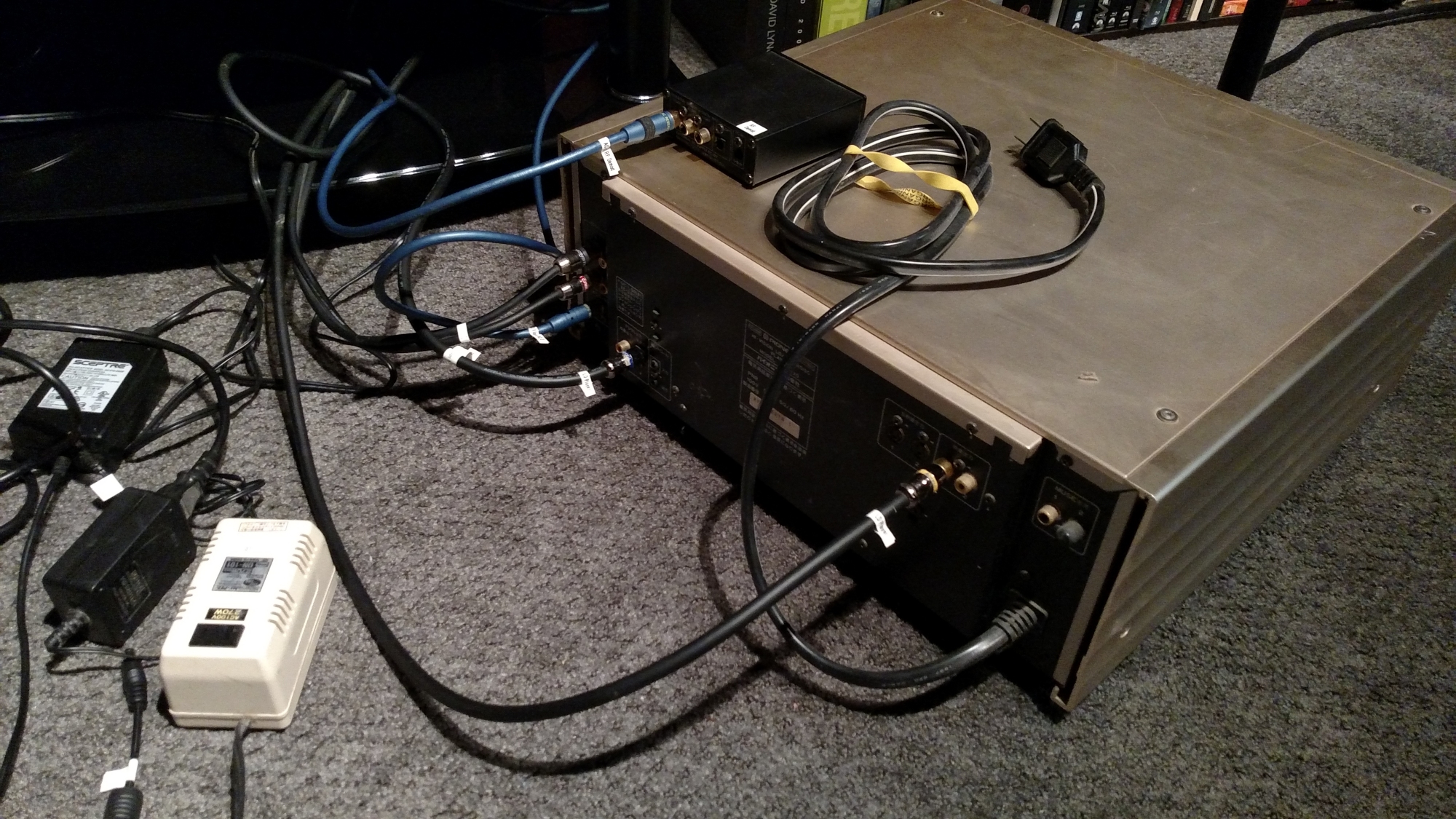 For all of the glitchiness and problems that it may suffer, HDMI has greatly simplified home theater in many respects.

It may seem counter-intuitive to use a Composite Video cable when the HLD-X9 also has an S-Video output. Wasn’t S-Video supposed to be the superior connection method? Not exactly. Laserdisc video is actually encoded on disc in Composite format. When using the player’s S-Video output, you rely on the comb filter inside the player to separate the color from the black & white parts of the signal. Unfortunately, even though the X9 had one of the best comb filters available in the mid-1990s, it does not play well with modern digital displays. The S-Video output results in serious “checkerboard” artifacts where areas of solid color will pixelate into large squares during motion. It’s virtually unwatchable now, especially when viewed on a projector. Meanwhile, the Composite Video output is unaffected by this.

The question is moot given that virtually no home theater equipment offers S-Video inputs anymore anyway!

From the player, all those cables have to go somewhere. I’m certainly not going to run a long Composite cable all the way to my projector (which doesn’t even have any analog inputs). The most logical move is to send everything to an A/V receiver, but even that’s not particularly convenient for me. I have so much home theater gear that it fills two equipment racks, and running four cables from the LD player and RF demodulator on one rack to the receiver on the other is a big mess. 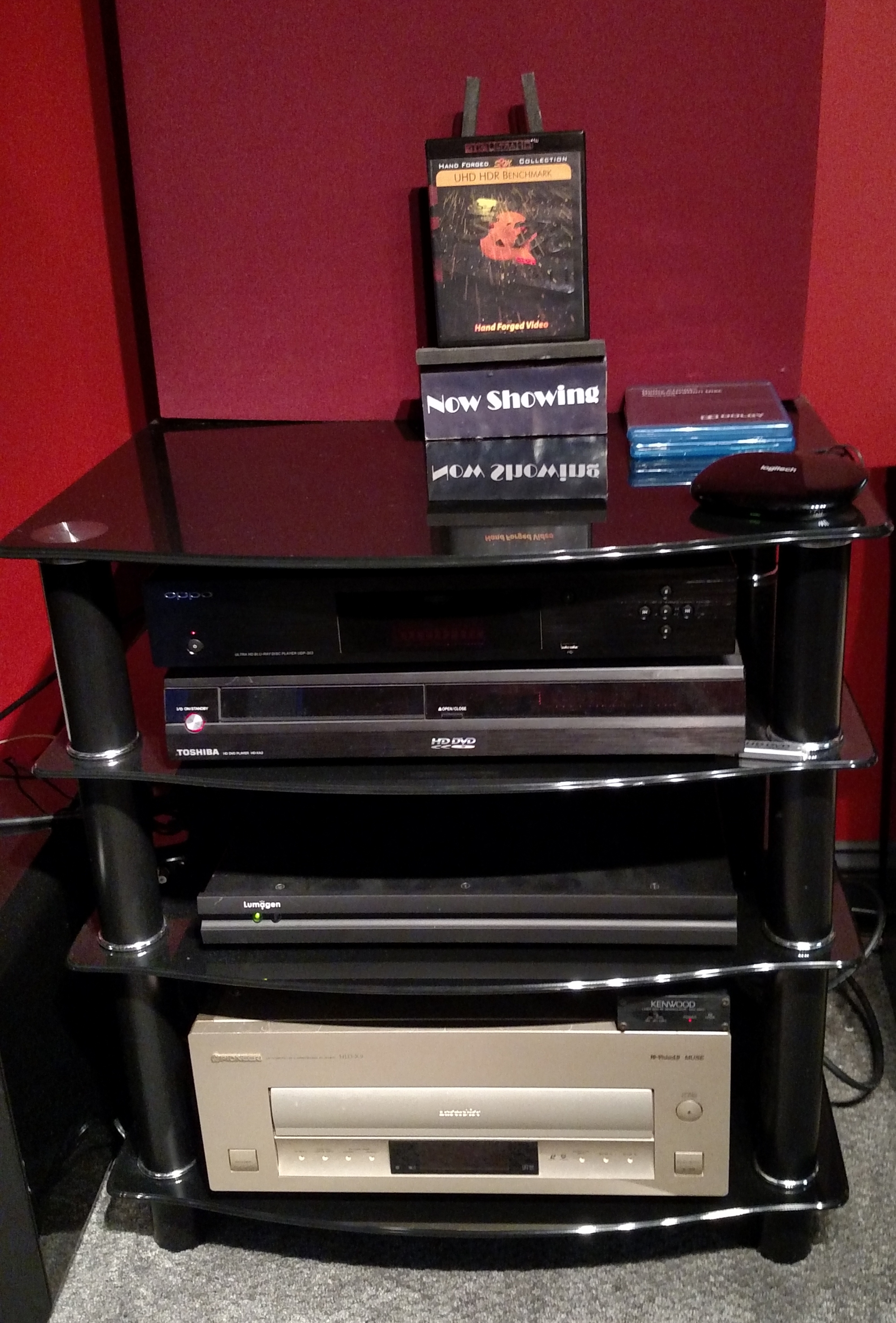 Until recently, a Lumagen Radiance XS video processor had been the central hub for my home theater through which all of my various video sources were routed, scaled, and switched. Unfortunately, the XS model cannot do 4k. I had to bypass it and pull it out of my system when I upgraded my projector a few months ago. Thankfully, Laserdisc actually gives me a use for it again. I’ve moved that processor over to the same rack as the LD player and connected all of the X9’s various cables to it. The Radiance will digitize and consolidate the video and audio into a single HDMI output that’s much easier to run over to the receiver. It also does a pretty good job of scaling the standard-def video to 1080p, which allows the projector a slightly easier task of only needing to upconvert from there to 4k.

With all that accomplished, I put in my first Laserdisc (Dune, naturally) to test the player and my heart sank. The machine simply ejected the disc without playing. I tried a few times to the same result.

I switched to GoldenEye (another CLV format disc) and tried again. Although that one loaded, playback was extremely glitchy. The video froze repeatedly while audio continued playing. The player wasn’t responsive to any commands from the remote (and yes, I did put in fresh batteries). Only the front panel buttons did anything.

I was all set to shoot off an email to a friend of mine who works on LD players to see if it was worth trying to repair. Fortunately, I took a breath and tried one more disc. Toy Story (CAV format) played fine with no problems at all. I popped in another CAV disc (Dick Tracy) and that worked as well.

Thinking that perhaps the player would now only read CAV discs, I tried another in CLV format just to be sure. When Tomorrow Never Dies worked without issue, I went back to GoldenEye and it starting playing properly this time. I even got Dune to play.

My theory at the moment is that the player just needed time to warm up after such a long stretch of disuse. That’s what I’m telling myself, anyway. It has continued to be a little finicky with further attempts. Even though Dick Tracy worked on one day, it took me six tries to get it to load when I tested the same movie again a few days later. It did finally start playing, fortunately.

The next issue I encountered is that any content I play with a 4:3 aspect ratio displays static and other crap from the Vertical Blanking Interval at the top of the screen. Back in the day, stuff like this would be hidden by the screen overscan inherent to any CRT tube television, but it’s all fully visible on a screen with zero overscan. 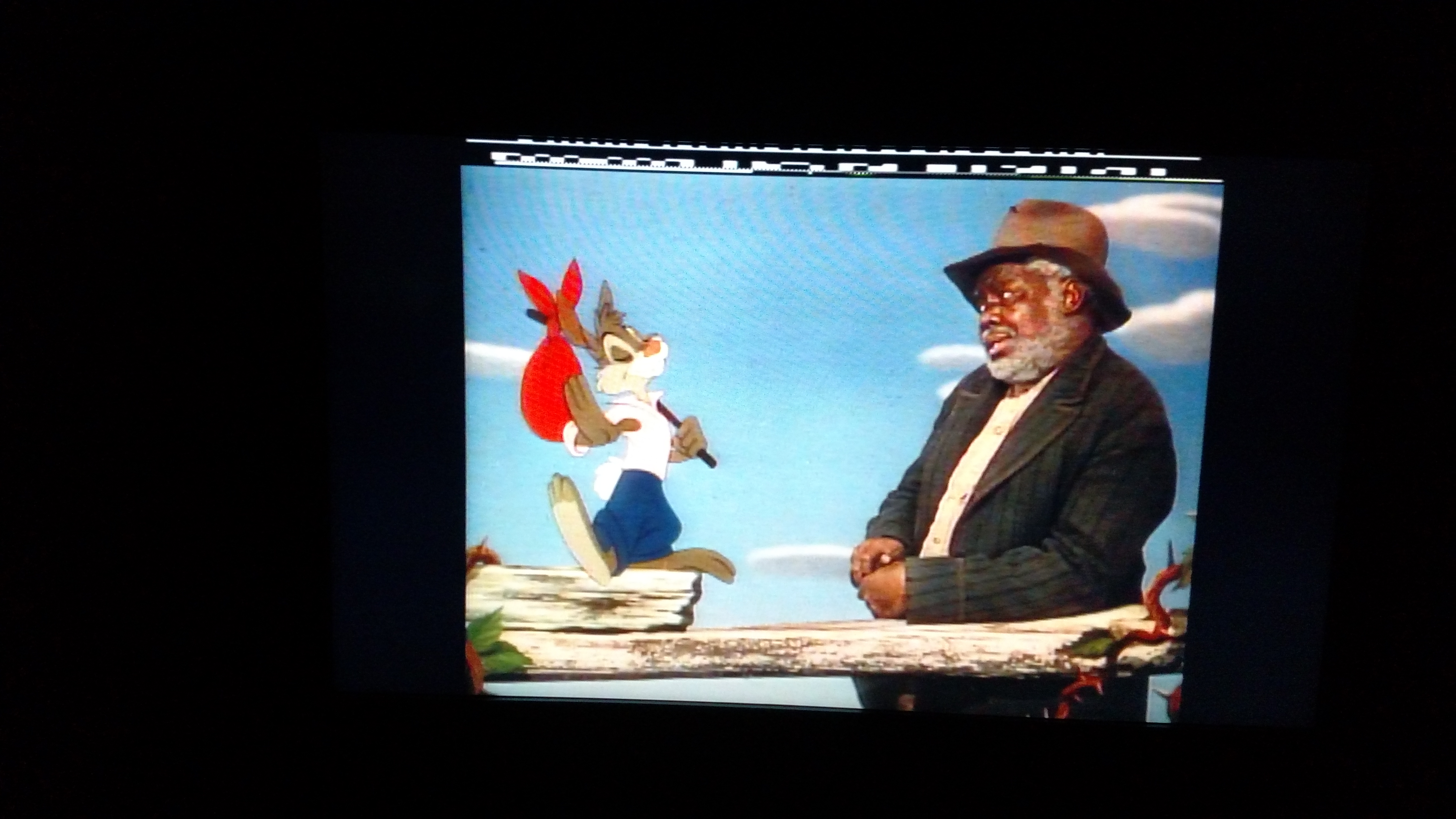 Luckily, the Radiance saved the day here as well. That processor has video controls that allow me to zoom in a step and slide the image up enough to eliminate the garbage without losing real picture content. For those who don’t happen to have such an esoteric piece of equipment, many HDTVs have an “overscan” setting that will zoom the picture up a little when you run into problems like this. You’ll probably lose a little image from the bottom of the screen, but it’s better than seeing all this unwanted junk you were never meant to see. Any widescreen movie that’s letterboxed on disc is meant to be zoomed up anyway, which will take care of the issue on its own.

Is It Worth It?

If all of that seems like a lot of work to play some 20+ year-old Laserdiscs, I wish I could state with some enthusiasm that the effort was rewarded. I have to be honest, however, that even with one of the best Laserdisc players ever made, the LD picture is very soft and flat and noisy, with dull and muddy colors. I don’t think any of that’s a player issue. We’ve just come a long way since Laserdisc. Once you’ve started getting used to 4k HDR, analog standard definition is kind of an eyesore. I might be able to tweak and better calibrate the picture by playing with the settings in my video processor, which will probably help a little, but I will need to temper my expectations for what might be possible there.

I still have a very strong sentimental attachment to my Laserdisc collection, and for that reason I’m very glad that I got the LD player working again. I even still have a small amount of content on LD that never made the transition to digital media. It’s nice to have access to that again. Realistically, though, the primary value of this experiment was pure nostalgia. As much as it saddens me, I can’t honestly say there’s much practical use for good ol’ LD anymore.