If anyone invented the blockbuster, it was Cecil B. DeMille. He was the James Cameron, Roland Emmerich, and Irwin Allen of his day, producing massive spectacles that filled the eye, dazzled the senses, and attracted audiences in droves. What P.T. Barnum was to the circus, DeMille was to Hollywood. He may not have been the greatest showman, but he was certainly the most flamboyant and bombastic. Adjectives like “big,” “bigger,” and “biggest” stoked his creativity and defined his films, and he spared no expense in his dogged pursuit of grandiose entertainment.

Period films were DeMille’s specialty. Whether they took place in the Biblical era (Samson and Delilah), Ancient Rome (The Sign of the Cross and Cleopatra), the Middle Ages (The Crusades), Colonial America (Unconquered), or the Old West (The Plainsman and Union Pacific), DeMille pictures were packed to the gills with elephantine sets, historical costumes, casts of thousands, pomp and pageantry, large-scale action sequences, and plenty of eye-popping special effects. Reap the Wild Wind can’t compete with The Ten Commandments in those categories, but this rough-and-tumble sea epic was nevertheless a huge box office success and stands as a prime example of DeMille’s go-big-or-go-home cinematic style.

It’s 1840, and Loxi Claiborne (Paulette Goddard), a beautiful, headstrong spitfire, runs her family’s ship salvaging business in Key West, Florida. The company’s mission is to rush to and ransack freshly wrecked vessels before they sink, then sell all the precious cargo their team of scavengers can scrounge. It’s a rough, dangerous, albeit lucrative business, and the competition is fierce. Ruthless rival King Cutler (Raymond Massey) wants to monopolize the salvage market, and his brazen tactics lead Loxi to believe he’s sabotaging the most valuable ships to achieve his goal. After one such suspicious wreck, Loxi and her crew lose the cargo, but rescue the ship’s injured captain, Jack Stuart (John Wayne).

Loxi nurses Captain Jack back to health and a romance develops, but on a trip to Charleston with her cousin Drusilla (Susan Hayward), the vixenish Loxi shamelessly flirts with Steve Tolliver (Ray Milland), the right-hand man of the crusty president of Jack’s shipping company, in the hope of securing Jack a new commission. The upstanding, somewhat foppish Steve falls under Loxi’s seductive spell and accompanies her back to Key West to combat Cutler’s corruption. Meanwhile, Drusilla’s liaison with Cutler’s brother Dan (Robert Preston) further complicates the scenario. Cutler retaliates, of course, and as conflict, angst, intrigue, and betrayals pile up, plenty of drama and violence ensue. None of that, however, can compete with Jack and Steve’s climactic underwater showdown with a giant squid(!) that just might devour them both.

Like most DeMille movies, Reap the Wild Wind has everything and tries to please everyone. The film is impossible to pigeonhole because it dabbles in almost every imaginable genre. With its 1800s setting, spectacular storm and shipwreck sequences, kraken-like sea monster, bruising brawls, and colorful Cap’n Jack, it’s a definite forerunner to – and possible inspiration for – the Pirates of the Caribbean films. Reap the Wild Wind is also a period romance, courtroom drama, quasi-Shakespearean tragedy, underworld crime yarn, and is populated by a cast of characters who appear to have been cloned from Gone with the Wind.

First and foremost, the fickle, gutsy, manipulative, and alluring Loxi is an obvious ripoff of Scarlett O’Hara (though Loxi is far more shallow and infinitely less interesting). Ironically, Paulette Goddard tested for Scarlett a few years earlier, so we get a taste here of how she might have played that plum part. (Spoiler alert: producer David O. Selznick made the right choice by casting Vivien Leigh.) The young Hayward was also a Scarlett contender (who in Hollywood wasn’t?), but her mild-mannered Drusilla is more reminiscent of Melanie Wilkes. The always spirited and delightful Louise Beavers is given the thankless task of trying to make Hattie McDaniel’s Mammy character her own, while famed gossip columnist Hedda Hopper – in her final role playing someone other than herself – as Loxi and Drusilla’s Aunt Henrietta can’t help but evoke Laura Hope Crews’ flighty Aunt Pittypat, especially when Loxi’s scandalous antics cause her to faint.

The sprawling narrative and cardboard characters lend Reap the Wild Wind a generic, shallow feel, but it’s still rip-roaring popcorn entertainment. The pace rarely drags, the striking, Oscar-nominated Technicolor cinematography lights up the screen, the star-studded cast performs with vim and vigor, and then there’s that giant orange squid! Though it might provoke titters today, the slimy, multi-tentacled amphibian helped the film win an Academy Award for Best Special Effects. Made of sponge rubber and mechanically operated by a 24-button keyboard, the 45-foot sea monster terrorizes Wayne and Milland as they swim amid schools of colorful tropical fish and the floating debris of a submerged ship in an enormous tank that reportedly was filled with 800,000 gallons of Pacific Ocean water. The ambitious scene was shot at Santa Monica’s Pan Pacific Marine Museum and distinguished by state-of-the-art underwater photography. The sequence may be cheesy, but it’s something to see.

So is Reap the Wild Wind. Despite its faults, the film delivers the goods and reminds us just what a cinematic impresario Cecil B. DeMille once was.

Presented in its original 1.37:1 aspect ratio, Reap the Wild Wind looks mighty fine on Blu-ray. Excellent clarity and contrast distinguish the 1080p/AVC MPEG-4 transfer, which beautifully showcases the movie’s Oscar-nominated Technicolor photography. Hues are bold and vibrant, but still maintain a natural appearance. Primaries especially pop, but delicate pastels nicely complement them. Light grain supplies essential texture, and though some errant blotches, nicks, and dirt occasionally dot the print, the source material is largely free of damage. Black levels are dense, flesh tones appear natural, and the close-ups of Goddard and Hayward are gorgeous. I haven’t seen any previous home video incarnations of Reap the Wild Wind, but it’s hard to imagine the movie looking much better than it does here.

The DTS-HD Master Audio 2.0 mono track is fairly robust for a film of this vintage. In fact, at times, it can be a little too robust. During the first shipwreck scene, the howling wind, rough surf, and omnipresent spray tend to drown out the shouted dialogue. Thankfully, once that sequence concludes, the track settles down and produces clear, balanced sound. Sonic accents like the screechy outbursts of a pet monkey and the hull of a ship slicing across a reef are crisp and distinct. Victor Young’s musical score fills the room with ease and no age-related hiss, pops, or crackle intrude.

The only disc extras are a re-release theatrical trailer and an animated image gallery that runs a whopping 16 minutes and features a slew of rare production and scene stills, reproductions of promotional materials, and publicity portraits. 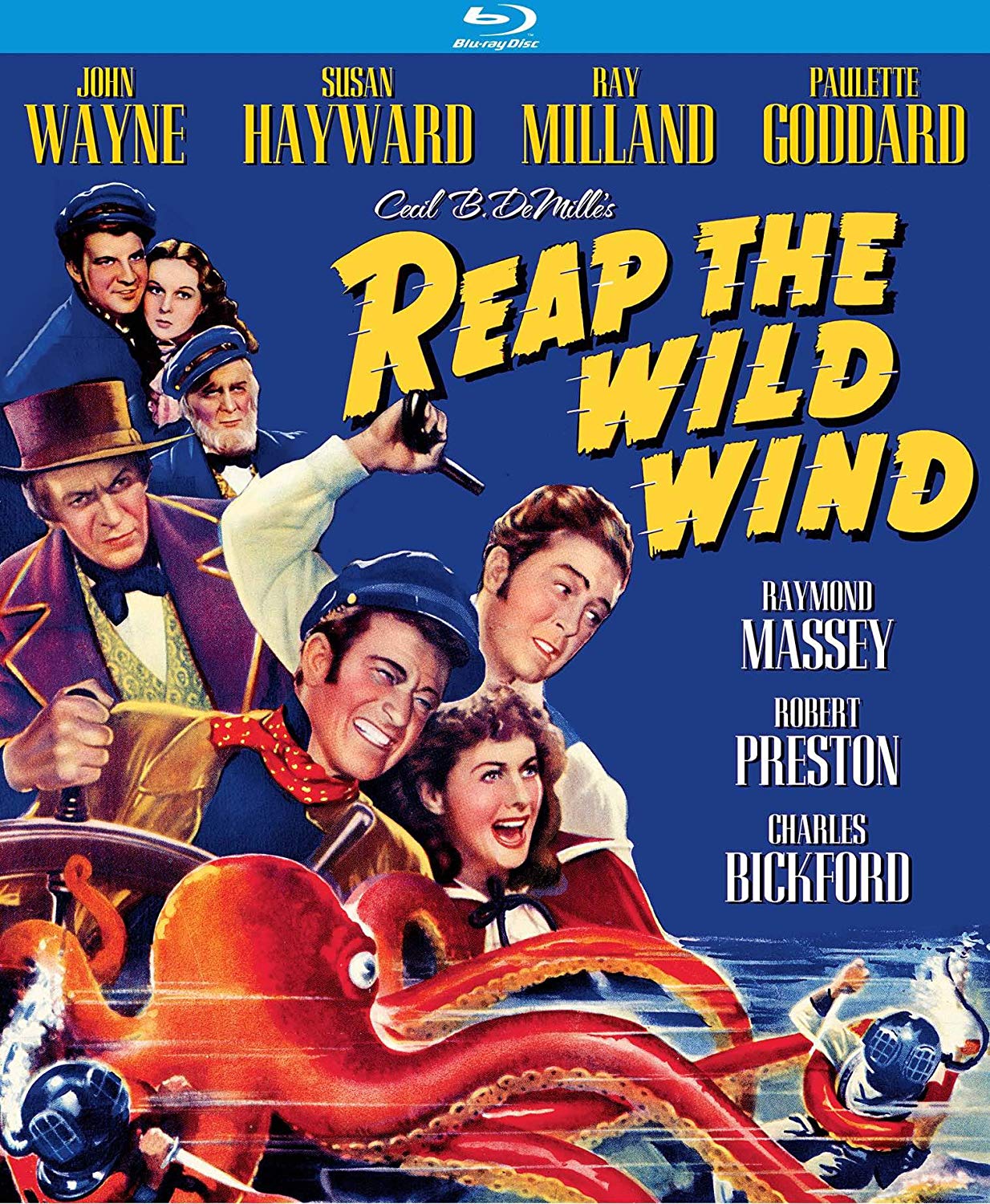