As I mentioned in a post earlier this week, my home theater got a major overhaul this past weekend. I installed both a new video processor and (perhaps more importantly) a whole new projector: the JVC DLA-RS40. Ironically, the latter turned out to be much easier to install than the former. With both of these now in place, I’ve finally joined the 3D revolution. Keeping in mind that I still have very few hours on the projector at the time of this writing, here are some initial impressions.

I’m coming to the RS40 from JVC’s older DLA-HD100 (equivalent to the RS2), which is a late 2007 / early 2008 model – in other words, three years old. I’ve been very happy with that unit’s 2D performance. In my experience, no other projection method can match the picture quality of JVC’s D-ILA line, mainly due to its exceptional native contrast. Displays that attempt to fool the eye with dynamic or adaptive contrast features just don’t look nearly as good. Prior the HD100, I used to be a die-hard DLP advocate, but I really couldn’t go back after switching to D-ILA. So, when it came time to upgrade to 3D, what I essentially wanted was a projector more-or-less the same as my old one with 3D added. And that’s just what the RS40 looked like. In fact, based on the company’s advertised specs, the three product generations since my model should have seen a pretty sizable improvement in contrast over what I was already happy with.

Early user reports had me a little concerned. It appears that JVC didn’t merely add 3D to the prior year’s model. The company made a significant overhaul to the design. Some early adopters complained of serious convergence problems with the red, green and blue color panels, while others said that everything was fine in that respect. Some people insisted that the lamp was very dim out of the box, others that it starts bright and then dramatically loses intensity after some hours of usage, and (again) still others that there’s no problem with brightness at all. A friend of mine installed an RS40 a couple months ago and has been pretty pleased with the one he received. So, even with all this conflicting information, I decided that the time was right for an upgrade. I placed an order about a month ago and had been waiting for new stock to come in. (The unit has been in very short supply since release earlier this year.)

As far as the first problem goes, I appear to have received a good unit. Panel convergence is spot-on. Test patterns show no color fringing on any part of the screen. That’s pretty impressive for any three-panel projection design. Most have at least some moderate degree of tolerance that’s considered acceptable. Mine looks perfect so far. This may be a luck-of-the-draw situation, and I got lucky. 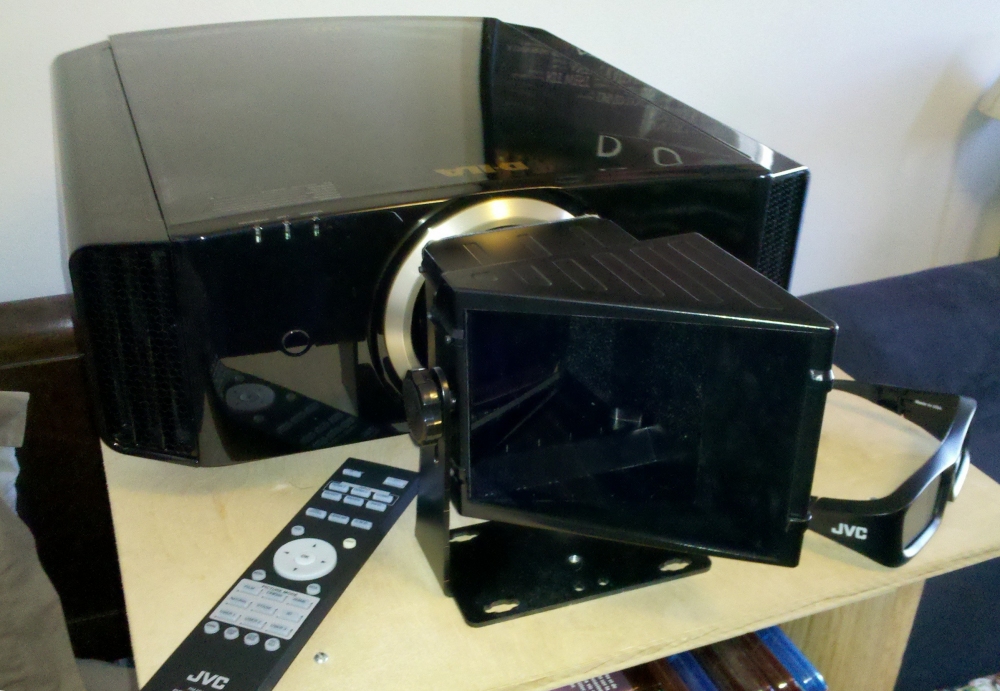 I don’t think I have enough time on the projector to make definitive statements on the brightness issue. Out of the box and still with little usage, the projector is very bright on my screen, even in low lamp mode (my default). It’s decidedly brighter than my HD100, which just had a fresh lamp installed not too long ago. But I need to give it at least a couple hundred hours of use to see if the lamp drops as dramatically as some people claim. Also keep in mind that, at six-feet wide, my screen is on the small side for front projection. Some projector owners try to push an image almost twice that size, for which maintaining decent brightness is a much bigger challenge. Personally, since I’m in a small room and prefer a brighter, punchier picture, this size works better for me.

Several reviews I’ve read, as well as my own friend’s report, have said that the RS40’s provided presets can achieve surprisingly accurate color and grayscale results without the need for extensive calibration. (A full calibration could improve the picture further, but it’s quite close out of the box.) I don’t have a colorimeter here, and it’s too soon to bring in a professional calibrator, but at least to my eye the “User 1” mode, “6500k” color temperature, “Normal” gamma, and “Enhanced” black level provide an excellent picture right away with just some basic Brightness, Contrast, and Color adjustment from a simple calibration disc.

Not that the HD100 was loud or anything, but the RS40 is truly whisper quite in low lamp mode. I keep my projector on a shelf near my head, and I can barely hear it at all. Again, even though I was already plenty happy with picture contrast on the HD100, the RS40 is a definite improvement there as well. The black floor is darker, whites are whiter (perhaps owing to the high brightness at low lamp hours), and shadow detail in the range in between is better delineated.

So, I’m pretty pleased with those initial findings for standard 2D content, which of course will remain 99% of my viewing for the foreseeable future. The projector is exactly what I wanted it to be – pretty much the same as my old model with some noticeable and worthwhile improvements.

Of course, it has 3D too. I haven’t had too much time to experiment with that yet, so I’ll have to get to my first impressions in that regard in a later post.

[Update: The 3D impressions are here.]