I don’t know how your week went, but last week was not a very good time for me. My home theater had a meltdown, and for a few days I was convinced that my projector had died on me. Of course, this all had to happen right as my DVR hit 96% of its storage capacity and I’ve got a bunch of Blu-rays to review. There’s never a good time for an expensive piece of electronics to fail on you, but this was especially problematic for me.

Here’s what happened: Over the last couple of weeks, I’d had intermittent problems where my JVC D-ILA projector wouldn’t start on the first attempt. I’d try to turn it on, but only get a brief whirling noise from the front of the machine. Neither the fan nor the lamp would engage. The projector would automatically attempt this three times before giving up, at which point an orange “WARNING” light would turn on and the “LAMP” light would start to blink. According to the owner’s manual, this means that there’s a problem with the lamp, which probably needs to be replaced.

Projector lamps are fairly easy to remove and replace. However, I was skeptical that this was really the problem. At around 1,300 hours of usage, my lamp was still well below its rated 2,000-hour life expectancy. While it’s true that many lamps fail early, this one didn’t just die outright, as I would have expected. Several times when this happened, I would unplug the projector for a few minutes, then try again and find that the projector would suddenly start working normally. Because the lamp eventually struck and didn’t seem to have any dimness or flickering issues, and because that whirling noise distinctly emanated from the front of the unit (whereas the lamp is in the back), I suspected that something else was going on inside the projector. Nonetheless, at this point, the problem was still merely an annoyance. So long as the projector started up eventually, I wasn’t too concerned.

That is, not until last Tuesday, when the projector refused to start at all. I tried numerous times over the course of several hours, and got nothing. When it still refused to work the next morning, I knew that I was in a bad spot.

I emailed JVC technical support, who replied very promptly. They (naturally) suggested installing a new lamp. That’s easily said, but the problem is that the official JVC replacement lamp for my projector is priced at $399. That’s a lot of money. I’d be willing to spend it so long as I could be reasonably assured that the lamp was really the source of the problem. I didn’t want to spend that kind of cash only to find that there was still something else wrong. And as I mentioned, I had my doubts that the lamp was really at fault here.

After I described my symptoms, the JVC people agreed that there might be something else going on with the unit. They instructed me to clean out the air vents, in case the cooling fan was blocked by dirt. Indeed, when I pulled out my projector, I found a lot of dust underneath it. However, neither the vents nor the filter in the machine looked all that dirty. I cleaned them, but sadly that didn’t help. I also followed a recommendation to remove and re-seat my existing lamp, to see if it had merely lost its contact with the projector. That didn’t work either.

JVC next advised that I should ship the projector to them for servicing. This was problematic for me for a few reasons. First, I’m outside my warranty period, and there’s no telling how much a repair would cost. Secondly, packaging and shipping a large and fragile item like this is a significant hassle (especially since I no longer have the original box). Perhaps most troubling of all for me is the fact that I’ve had bad experiences in the past with manufacturer repair centers. I’d sent a previous projector of mine (not a JVC) to an authorized repair center, only to get it back without the problem being fixed. I spent a lot of money shipping it back, only for the same thing to happen again. Admittedly, I haven’t dealt with JVC’s repair center, but nonetheless I’d prefer to exhaust every other possibility before going that route.

Where did that leave me? I could order a replacement lamp and hope for the best… or buy a whole new projector. Honestly, I considered the latter. I’ve been planning to upgrade to 3D anyway. Perhaps this was just the kick in the pants I needed. I called up my home theater dealer to ask about the model I’ve had my eye on, one of JVC’s new 3D projectors. (I’ve been very happy with my current unit’s 2D performance. What I’m looking for is basically the same thing, just with 3D added.) Unfortunately, the model I want is backordered until at least April. 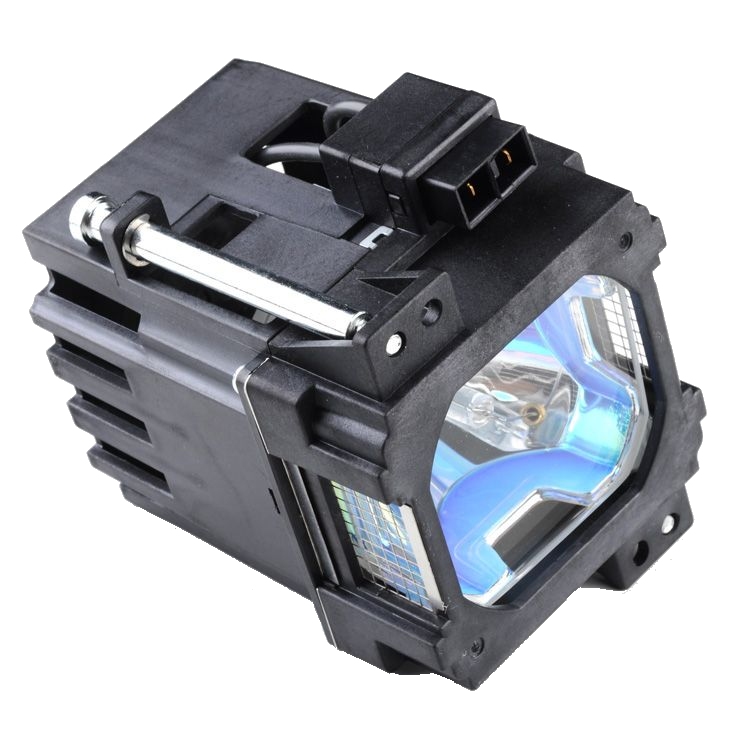 So… this seemed like time to try a new lamp after all. Still, $400 felt like a lot to risk for something that I was dubious about. As an alternative, I discovered that I could spend considerably less for an unofficial “compatible” lamp from a generic brand. I found that Amazon fulfills orders for a lamp from a brand called Electrified, which is priced at just under $150. JVC of course recommends against using generic brand lamps, and I’ve read some horror stories about such things having poor reliability. On the plus side, Electrified offers a 120-day warranty. Even if the lamp didn’t work, this seemed like a much more acceptable risk than the $400 official lamp. The fact that I only had to spend $3.99 for overnight shipping with my Amazon Prime membership just sweetened the deal.

Cutting to the chase here, the replacement lamp arrived on Friday. I installed it that night, and the projector fired right up. It was the lamp at fault all along. Whew!

Now that it appears that there isn’t anything else seriously wrong with my projector, this leaves me with a new (much less severe) dilemma. Do I stick with the Electrified lamp and hope that this generic brand product doesn’t crap out on me in a couple weeks? Do I spend the $400 to order an official JVC replacement lamp, and keep the Electrified model as an emergency backup (like the donut tire in a car)? Or do I finally order that new 3D projector I’ve been coveting and hope that the Electrified lamp will hold out until that comes into stock? This is a decision that I’m still mulling over.