One of the more obvious downsides to the current generation of 3D home theater is an artifact known as crosstalk (or “ghosting”), in which picture information meant for one eye intrudes into the other eye’s view. This results in a ghostly double-image around objects in the frame. It can be incredibly distracting when it happens. After a recent bout of terrible crosstalk on a couple of Blu-ray 3D discs, I thought that I might have figured out a potential way to reduce or eliminate the artifact. Alas, I found no easy cure for this 3D malady.

The exact causes of 3D crosstalk are widely and inconclusively speculated. Some displays seem to be more prone than others. Reportedly, DLP TVs and projectors are virtually immune to the problem, while LCD screens typically have it worst. My JVC D-ILA projector supposedly falls somewhere in the middle. Yet the content being watched also seems to play a part. Some movies or videogames exhibit stronger crosstalk artifacts than others, and often on a wide variety of displays. I don’t know of anyone who’s played the PS3 game ‘Killzone 3’ in 3D without complaining about serious ghosting problems during the cut-scenes. So, is it the content at fault or the display?

Recently, I came across the worst case of crosstalk yet while watching the Blu-ray 3D editions of ‘Monsters vs. Aliens‘ and ‘How to Train Your Dragon‘ on my projector. Yet the Blu-ray 3D edition of ‘Cloudy with a Chance of Meatballs‘ (another CG animated movie with a similar visual style) is nowhere near as bad on the same screen. Other than the difference in production studio (‘Cloudy’ is a Sony title, while the others belong to DreamWorks), there doesn’t appear to be anything inherent to the look of one film (stronger contrasts, more saturated colors, whatever) that might exacerbate the problem over the other. Perhaps this has something to do with one studio authoring the discs with more of a parallax offset between the right and left eye images than another studio? That sounds plausible, right? 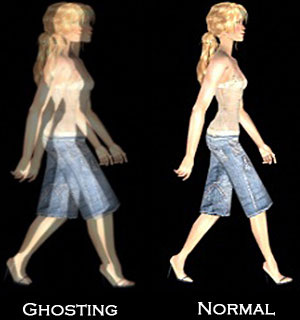 At the same time, some viewers have watched the ‘Monsters’ and ‘Dragon’ discs without noticing much crosstalk. In fact, I cued up some of the worst scenes and played them on my Vizio passive 3D TV, and the ghosting artifacts (if not quite gone) were greatly lessened. This would seem to point back to the display being at fault, not the discs.

In either case, what can be done about this? I thought that I had come up with a possible solution. Emphasis on thought.

It seemed to me that crosstalk must be the result of improper convergence of the left and right eye views. If the parallax offset between the two is too wide (or too narrow), the 3D glasses won’t sync to the image properly and direct the correct image to the correct eye. So, what I wanted to do was adjust the parallax by either converging the two views closer together or wider apart.

Some 3D TVs offer a “depth” or “strength” adjustment setting that will manipulate the parallax offset between the left and right eyes. Unfortunately, neither my 3D projector nor 3D TV has this feature. Nor does my OPPO BDP-93 Blu-ray player. However, Panasonic Blu-ray players (such as the model that E. wrote about a couple months ago) do have such a feature. Panasonic calls this the “3D Effect Controller.” When I reached out to some contacts at Panasonic for an explanation of exactly what this setting does, I received the following response:

3D Effect Controller allows you to moderate the leaping effects of 3D content. It adjusts the depth of objects by independently equalizing the left and right view of the picture. 3D effect controller also lets you shift the picture back and forth. Overall, this feature helps those who are uncomfortable or not used to viewing content in 3D.

While this feature wasn’t designed with my particular need in mind, the part about “independently equalizing the left and right view of the picture” pretty much sounded like what I wanted. If I could use this to tweak the parallax of a Blu-ray 3D image, I hoped that I would converge the eye views better and eradicate those pesky ghosting artifacts. And since the Panasonic DMP-BDT110 can be purchased for just over $100, this didn’t seem like too big of a risk if it didn’t work.

Well, I bought the machine and played around with it quite a bit. My results were unfortunately very mixed. On the worst crosstalk scenes of ‘Monsters vs. Aliens’ (and there are many), I could converge the parallax to eliminate ghosting on foreground objects but not background, or vice versa. There was no sweet spot setting that converged all depth planes. As shots changed or characters moved forwards or backwards in the frame, a ghost-free image would turn into a ghost-filled image. The default setting seems to be to prioritize convergence of the foreground, which is least distracting, but also basically the same as the results from my OPPO player.

While I was at it, I also tried out the Panasonic’s 2D-to-3D conversion feature on some standard Blu-ray discs, and found it to be pretty useless. All it did on either of my screens was make the whole flat 2D picture look like it was inset a few inches behind the frame of the screen. It didn’t create any depth mapping or pop-out within the image other than that.

The experiment a failure, I wound up returning the Panasonic player. I’m still searching for that magic cure that will solve my 3D crosstalk problems. Or, failing that, a concrete explanation of what really causes them would be nice.