So, of course, the biggest release this week is the mega-budgeted superhero sequel ‘Iron Man 2.’ But there are a couple of lower profile movies coming out this weekend too. No, seriously.

So, yes, ‘Iron Man 2‘ is opening. You can feel free to read my epic review on this very blog! Long story short: it’s got tons of action, tons of character and, despite a few slow spots, is a genuinely entertaining and fun diversion. We’ll see how it holds up on multiple viewings, but for this weekend it’ll be a hell of a ride. Also, as if you needed another reason to see it, you’ll be treated to the teaser trailer for J.J. Abrams’ forthcoming super secret project, ‘Super 8.’ I got a chance to see the trailer yesterday morning and it was super impressive: moody, evocative, and cool-as-shit. He’s going for a kind of Amblin Entertainment, “Spielberg in his creative heyday” style. (Mr. Spielberg even agreed to produce the thing). And boy, he nails it. Let’s just say that there’s a very ‘Close Encounters of the Third Kind‘ vibe going on.

But there are a couple of biggish releases also being snuck into theaters in the shadow of the giant gold-and-red man.

‘Babies,’ which I haven’t seen and honestly have no intention of seeing, is opening WIDE this weekend. Yeah, that’s kind of baffling. It basically follows four babies in four different parts of the world, without narration, as they grow up and do cute stuff. The trailer promises some hilarious goat/baby interaction. Maybe that’ll be enough to get people into the theater. But I doubt it. 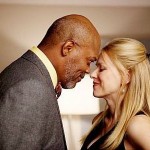 Opening in limited release, with a wider release later this month, is the quietly affecting ‘Mother and Child.’ Director Rodrigo Garcia weaves together the stories of three women – Annette Bening, Naomi Watts, and Kerry Washington – who are each dealing with motherhood and adoption. The movie occasionally veers dangerously close to melodrama, but the gracefulness of the performances (particularly Bening) and the richness of the cast (every supporting role is filled by an A+ actor, among them Cherry Jones, David Morse, and Elizabeth Pena) keeps that from ever really being an issue. Also, there’s Samuel L Jackson in his second movie this weekend. Only this time he doesn’t scream and isn’t wearing a black leather duster and an eye patch. Actually, it’s probably his best performance since ‘Black Snake Moan.’ Saying any more about the plot of ‘Mother and Child’ would be a disservice to the film, because the way that the three stories interplay and collide is one of the chief joys. It’s the perfect Mother’s Day movie, for sure. Just be warned: there will be tears (from you and mom).

Next weekend, the summer movie-palooza continues with Russell Crowe inhabiting the tights of ‘Robin Hood‘ for the umpteenth time. Do we really need another ‘Robin Hood’? Probably not. But that has never stopped Hollywood from recycling the same old stories.