‘Iron Man,’ released two years ago, wasn’t exactly the most nuanced superhero outing. It had a mechanical “origins” plot and muddy politics. (Billionaire industrialist Tony Stark wants his tech taken off the market to stop it from being used to kill people. But then he just appropriates the same tech and… kills people, right.) In the lackluster climax, our titular hero fought a slightly different version of himself, which eerily echoed the climax of that same summer’s ‘The Incredible Hulk’. It wasn’t the tightest or most efficient comic book caper. What it did have was a stellar cast, with Robert Downey Jr. admirably taking the mantle of Iron Man (and Tony Stark) with much wise-ass brio. The supporting cast, including Gwyneth Paltrow, Terrence Howard and future Oscar-winner Jeff Bridges, held their own against millions of dollars of computer generated effects. But the biggest asset to the first ‘Iron Man’ was its attitude. Years before ‘Kick-Ass,’ ‘Iron Man’ was the first superhero with the “screw you” swagger. So, does the attitude remain in ‘Iron Man 2’? Or does it get washed out by even more computer generated wizardry? Read on to find out!

Yes, by and large, ‘Iron Man 2’ does retain that reckless, rock ‘n roll vibe from the first film. My biggest fear going into the movie was that Robert Downey Jr.’s oversized persona as Tony Stark would get drowned out by all the mayhem that surrounds him, leaving him a somewhat dull and lifeless character. (This happened to Johnny Depp’s Captain Jack Sparrow as the ‘Pirates of the Caribbean’ films wore on.) Well, those fears should be put aside. As clangorous and outrageous as ‘Iron Man 2’ eventually becomes, it’s Downey Jr.’s Stark, ever the scheming, smart-ass whiz kid, that remains the film’s most special special effect.

The movie starts about six seconds into the last film, with Tony Stark announcing to the world that he is, indeed, Iron Man. Except now we’re watching this from a cramped apartment in Russia. This is where Ivan Vanko (played with all sorts of growling menace by Mickey Rourke), son of a disgraced Soviet scientist, sets about getting his revenge on the mighty Tony Stark. Ivan’s father helped Tony’s dad with the original Arc reactor, the thing that fuels Tony’s suit. So he’s got the goods. From snowy Russia we snap to clear-skied Queens, where Tony is introducing the Stark Expo, a massive, Worlds Fair-type technological exhibition in Flushing. It’s here that we’re introduced to Tony’s father, via footage produced for the 1974 Stark Expo. Howard Stark, played by John Slattery from ‘Mad Men,’ stands in front of a large scale mock up of a futuristic city, in a scene that directly mirrors a presentation Walt Disney did for his Experimental Prototype Community of Tomorrow (the basis for the later theme park we all know as EPCOT – there’s even a “Carousel of Progress”-type song that plays over the closing credits). While Howard Stark speaks from beyond the grave, Tony tests his blood, as he is slowly being poisoned to death by the arc reactor in his chest.

These early scenes are electric and bristle with possibility, even more so in the following sequence, which has Tony appearing before a senatorial committee (headed by Gary Shandling). The government wants control of the Iron Man suit. Tony doesn’t budge. He says that he and the suit are one. It’s kind of powerful, actually. The committee wonders what will happen if some dictator, terrorist cell or malevolent foreign power gets hold of the suit. Tony replies by showing footage of various attempts at Iron Man technology failing. It’s in this scene that a much harder, more satirical edge to ‘Iron Man 2’ is revealed. One that’s never fully explored, but still, it was nice to see these flashes of its ‘Robocop’-like edge. It’s in this hearing that we get to meet our other Big Bad – Justin Hammer (Sam Rockwell, electric as always), a rival arms manufacturer who wants to beat out Tony for the lucrative government contract. (This is really as close as we get to motivation. Dude’s kind of a cipher. Still, it doesn’t take a lot of imagination to blur “corporate lust” with “out-and-out villainy.”)

The ninety minutes that follow these exploratory (and expository) scenes are chock full of absolute madness. Between the two villains, two heroes (Tony’s BFF Rhodey, this time played by Don Cheadle, dons an older Iron Man suit to become War Machine), some duplicitous S.H.I.E.L.D. agents (Scarlett Johansson steals every scene she’s in as Black Widow) and major daddy issues, the thing feels a bit overstuffed. But it never loses that somewhat shaggy, “guys sitting around and talking” feeling from the first movie. For all the expense and headache, director Jon Favreau maintains his cool and composure (even upping his small on-screen role from the first film). He makes choreographing a multi-million dollar summer spectacle seem like a breezy afternoon with the boys.

It’s in this interplay, between the improvisational, people-talking-over-one-another stuff that Favreau honed so well early on in his career with movies like ‘Swingers’ and ‘Made,’ and the large scale, highly detailed action set pieces (which have become more elaborate but no less engaging this time around), that makes ‘Iron Man 2’ such an interesting piece of summer blockbuster fluff. If John Cassavetes made a ‘Superman’ movie, it’d probably look something like this. Except, you know, without all the wounding psychological/emotional exchanges.

Does ‘Iron Man 2’ work entirely? Well, no. Sometimes things get a little too hectic for its own good. The crisscrossing sub-plots and motivations sometimes step over one another and get all tangled up. The flow of the movie occasionally suffers and sags. In the second half, in particular, Rourke seems to be more or less pushed to the side, in favor of some bravado Sam Rockwell stuff, which is all well and good if Rourke wasn’t such a commanding weirdo. With a mouth full of gold teeth and more tattoos than Viggo had in ‘Eastern Promises,’ he’s every bit as mechanical as Iron Man, but more single minded. Unlike Tony Stark, who is gunning for world peace, all Ivan wants is blood. 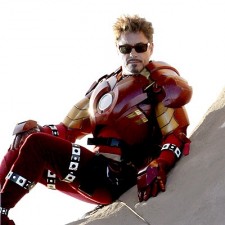 There’s also some interesting subtext that’s not fully explored, particularly about Tony and the relationship with his father, Howard. There’s a sweetness to this movie, predicated on both Tony’s heartbreak at not being close to his father and the discovery that dear old dad really did love him. And what’s more, pops had a similar view of a utopian society. To paraphrase pop singer Jamie Lidell, It’s a little bit of feel good, and it goes a long way. But not enough to make Tony a sap or take away the movie’s snappy rhythm.

Overall, ‘Iron Man 2’ is an incredible amount of fun, pure and simple. It’s also a great example that your movie doesn’t have to be in 3-D to be an out-of-control thrill ride. Sometimes a movie is so good it doesn’t need that extra dimension.