If Spider-Man’s nemesis Venom can score his own movie (despite his only prior screen appearance being in the reviled Spider-Man 3), it seems like the doors are wide open for all manner of other superhero spinoffs. Who will be the next supporting character or villain from a superhero franchise to get his or her own solo film?

I think it’s high time Marvel and Disney finally make a proper Howard the Duck movie. Granted, you can make a case that the 1986 George Lucas-produced cult favorite proves that audiences wouldn’t care for a feature-length film about a duck from another planet trapped on Earth. But that’s only because moviegoers have yet to see the wise-cracking, irascible character in his full fourth-wall-breaking, meta form, where his adventures are essentially social satires littered with cultural allusions and existential questions. Two Deadpool movies have shown that people are willing to pay for a lovable, foul-mouthed doofus, and Guardians of the Galaxy teased fans with a cameo that was hilariously accurate to the comics. To make things easier, filmmakers can make him part of the Spider-Man universe, and for shits-and-giggles, have Howard confront the likes of humanoid swamp creature Man-Thing and the bloodsucking vampire cow Bessie the Hellcow, who can then join the crew of Deadpool 3! That would be awesome!

I’m currently suffering from a bit of superhero fatigue, and after watching the Aquaman trailer three times yesterday (unwillingly), I’m starting to realize that there is really only one superhero franchise I look forward to this year: Glass. As an unrepentant superfan of Unbreakable and a casual supporter of Split, I want to see this universe expanded and more spinoffs from Shyamalan’s reality-adjacent world. Maybe the psychologist in Split can read minds? Who wouldn’t want to see Betty Buckley star in her own superhero movie? That, I want to see.

I’ll be laughed at by many of you (others will just think I’m trying to be funny), but I’d really like to see Marvel do an Aunt May movie.

Just think about it, a romantic comedy with Tony Stark as May’s love interest as well as a surrogate father to young Peter Parker. We got a taste of this in both Captain America: Civil War and Spider-man: Homecoming. I’d love to see a whole movie based on it, particularly since Marisa Tomei and Robert Downey, Jr. have great chemistry together.

Come on, Kevin Feige. Make Aunt May: The Movie a reality.

The first comics I ever obsessively collected were Batman and the Outsiders and its follow-ups. I was a devoted reader of many series prior to that, but these were the first where I was determined to hunt down every last issue, spin-off, and guest appearance.

I was old enough to know that the various Outsiders books could be ridiculous. I wasn’t old enough to appreciate just how wholly and completely ridiculous they truly were. There’s a cyborg petroleum tycoon with a thick Texan drawl by the name of the Duke of Oil. This was a series in which a Hitler clone chokes on his dinner, is poignantly (?) saved by his Jewish maid, and resumes eating without missing a beat. True to his nom de bad-guy, Ghetto-Blaster unleashes devastating sonic waves to level Suicide Slums.

If I had to choose just one of the series’ many memorable characters to land his or her own cinematic spin-off, though, it’d have to be Looker: 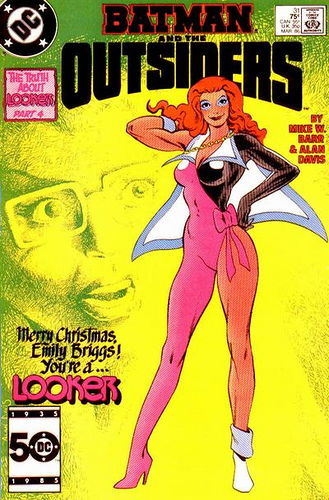 As Halley’s Comet soared by, plain-jane bank teller Emily Briggs was transformed into the statuesque bombshell we call Looker! Similar to one of Marvel’s famous redheads, Looker is both telekinetic and telepathic. Beyond just communicating purely with the power of her mind, she can mentally control others, induce hallucinations, or generally do whatever else a particular story demanded. And there’s so much drama built in! The once mousy, demure Emily is now graced with a supermodel physique, giving her a confidence she’d never had before. She in nearly every way is no longer the woman her husband Gregg married. How will the two of them cope as a couple? Oh, and she became a vampire in the ’90s, because of course she did. More than anything, I just want to see that glorious one-legged unitard find its way onto the big screen.

You might assume I’m being sarcastic, but think about it! Fox keeps threatening to give Gambit a movie, and if a guy rocking pink armor, a trench coat, exploding playing cards, a bo staff, a Cajun yat, and such inexorably ’90s head gear can get his own spin-off, anyone can.

Isn’t it time Catwoman got a proper do-over? I saw that Halle Berry atrocity in the theater for free and still felt like I’d been ripped off, but the character has plenty of potential. No, I wouldn’t want it to be the Anne Hathaway version. Cast someone new and on-the-rise, let a woman direct, and it could really turn out to be something worth watching.

Also, for the hell of it, let’s give Pepper Potts her own movie just to piss off the Gwyneth Paltrow detractors.

Whether serious or sarcastic, pitch us your ideas for the next big superhero spinoff.