This weekend’s big new movies – Disney’s ‘The Sorcerer’s Apprentice‘ and Warner Bros’ ‘Inception‘ – are big, hulking, hugely budgeted behemoths. And both are pretty diverting pop entertainments. (One’s better than the other. Read my reviews to find out which one!) But that doesn’t mean that if you’re in the mood for something smaller that you can’t get it. There are a couple of tiny movies that are just as deserving of your attention and well-earned movie buying dollars. Read on to find out more!

Two movies, both in limited release, demand your attention just as much as their big budget cousins. The first is Nicolas Winding Refn’s ‘Valhalla Rising.’ This film, which made the festival circuit last year (including a prominent place at Toronto) is a Viking movie the likes of which you’ve never seen. Director Refn, who helmed last year’s brilliant and underwatched ‘Bronson‘ (if you want to see Tom Hardy kick serious ass, pre-‘Inception,’ go here), said that he wanted to make a sci-fi movie without all the trappings of a sci-fi movie… So he made it about Vikings. The plot is straightforward enough, if at times a little elusive. It follows One-Eye (Mads Mikkelsen from ‘Casino Royale‘), a slave and ultimate bad-ass, who gets picked up by a bunch of Christian Vikings. Together, with a small child that One-Eye has befriended, they head out on an adventure. One of the big twists of the movie is where they end up, but I’m not going to spoil that for you. Let’s just say that the movie has shades of a horror film. If you’ve ever wondered what it would be like if Terence Malick made some crazy Viking movie, then this would be it. A lot of the story hinges on One-Eye, a silent performance that Mikkelsen pretty much brings everything to. The other thing the movie relies on is its excess of style. Things look beautiful, if grim. Refn breaks up the action with “chapter breaks” with headings like “Silent Warrior” and “The Holy Land.” Some critics found the movie to be utterly pretentious; not me. I loved every second of it. In fact, it’s one of my favorite movies of the year so far, an utterly original, one-of-a-kind experience that will stay with you long after you leave the theater.

I believe that the movie will be available On Demand. This is the first title in IFC’s new Midnight Movie imprint, and it deserves the label. I loved, loved, loved this movie. 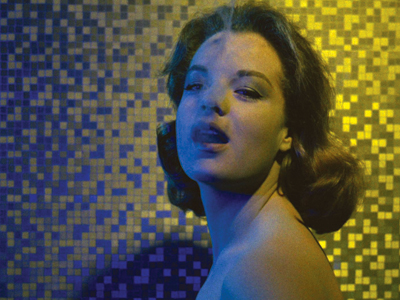 Another film that I loved, and one that is playing at the IFC Film Center in New York City, is ‘Henri-Georges Clouzot’s Inferno.’ Few things titillate the film obsessive’s mind like a lost masterpiece, and this documentary lovingly details a movie that very well could have been one. Clouzot, director of genre classics like ‘Wages of Fear‘ and ‘La Corbeau,’ spent years and countless gobs of American-financed money on ‘Inferno.’ His small goal: to visually capture the power of obsession, jealousy and paranoid. No small feat. He attempted to do this through crazy film coloring techniques and other things that more or less boggle the mind. This documentary, by Serge Rumberg and Ruxandra Medrea, uncannily uses 15 hours of footage and whittles it down to a 90 minute movie. It includes footage that Clouzot actually shot for ‘Inferno,’ as well as interviews with those involved. In some segments that you’d think would be terrible but really aren’t, actors read dialogue from the script while standing in a blank stage. The result is that you get a rough approximation not only of what the director was going through making the movie, but what the movie would have ended up being. By the end, you’re pretty well convinced that this would have been a movie that, at the very least, changed the way world cinema worked, but was left unfinished as of 1964. The documentary is a fascinating “What If…” and a compelling narrative in its own right. The film really would have been an amazing approximation of what jealousy feels like. The release of this documentary is incredibly limited, so get there by any means necessary!

And that’s really it for movies this week. Lots of good stuff for the adventurous filmgoers, both in the multiplexes and the art houses.

I’ll be interesting to see what kind of money ‘Inception’ pulls down this weekend. The studio predicts somewhere in the $40-50 million range, but I’m thinking it might be higher. I think that strong word of mouth will really carry this one. If people can get themselves into the theater and sit for a movie that they know very little about, then they’ll have a great time and tell all their friends. It’s just that “getting them into the theater” part that might be tricky.

‘Sorcerer’s Apprentice,’ which opened on Wednesday, seems to be a huge bomb for Disney and Bruckheimer. We’ll see just how huge a bomb come Sunday.