When I went to a press screening of the latest Jerry Bruckheimer/Walt Disney Pictures visual effects extravaganza ‘The Sorcerer’s Apprentice,’ I sat a few seats down from someone who introduced himself as having worked on the locations for the movie. He said that he spent eight months on the production, which shot all around New York City. “Maybe ten,” he later admitted. This seemed to me like an unbelievable amount of time to spend on a movie, even a big Hollywood movie. I was flabbergasted that the production could have been that extensive. But then, after watching the film, I realized that its location work is one of its biggest assets. The movie seems like a throwback in this age of blue screens and Canada-subbing-for-NYC. ‘The Sorcerer’s Apprentice’ isn’t exactly magical, but the location stuff goes a long way to endear it. Way to go, location guy!

So, it should be asked: Is ‘The Sorcerer’s Apprentice’ awful? The answer, resoundingly, is no. In fact, the movie – which is based on that bit in ‘Fantasia’ when Mickey uses magic and then has to clean up after an unruly mop – is actually a fair amount of fun. It stars Nicolas Cage as Balthazar, one of three apprentices to Merlin (James A Stephens). He’s betrayed by Horvath (Alfred Molina), who kills Merlin. It’s Merlin’s dying wish that Balthazar track down an apprentice worthy of Merlin and his second-in-commands. This sends Balthazar on a trip across the ages. Eventually, he runs into the prepubescent version of our protagonist and – A ha! – the sorcerer has found his apprentice! In modern day New York City no less! But due to some crazy magical mix-up that is far too tedious to repeat here, Balthazar has to wait another ten years to actually train our hero, Dave (Jay Baruchel). Of course, Horvath has also escaped and wants to bring Arthurian heavy Morgana (Alice Krige) back to life for nefarious, world-ending purposes. 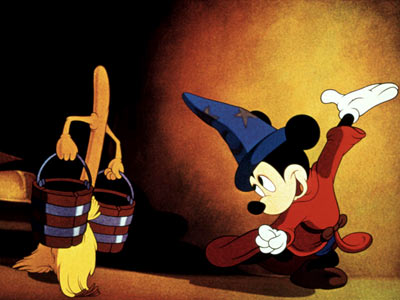 If the plot sounds a little convoluted and silly, that’s because it is. Much of the movie boils down to montage-y training sequences between Balthazar and Dave, lovey-dovey interludes between Dave and his love interest (the certifiably foxy Teresa Palmer), and the fun bad guy stuff that Hovarth is up to. Horvath also has an assistant – a flashy, Criss Angel-type magician played by the wonderful Toby Kebbell. The movie’s narrative is deceptively simple and yet needlessly convoluted. It’s full of magical items, “mirror worlds,” and other mumbo jumbo. You can also tell that much of the plot was re-composed long after the movie finished filming, since so much vital information is imparted off screen or via terrible last-minute dubbing. The film is quite clearly a hodgepodge of ‘Ghostbusters,’ ‘Men in Black,’ and the ‘Harry Potter‘ films, but never quite achieves the ‘Harry Potter’ levels of awe-inspiring wonder. Instead, ‘Sorcerer’s Apprentice’ merely coasts on the performances of its leads, the great location work, and the occasionally rich and tactile visual effects, such as an eagle of the Chrysler Building taking flight or a Wall Street bull statue charging at our heroes.

However, it should be said that this movie is a fair enough way to waste an hour and a half, especially if it’s hot outside. Director Jon Turtletaub, here redefining the term “workmanlike,” never lets things drag, except during the more openly sentimental sequences. He also knows exactly how to frame an idea or sequence so that it pops with as much “Awe, shucks” excitement as is humanly possible. Compared to ‘Prince of Persia,’ this summer’s other Walt Disney/Jerry Bruckheimer joint, this is like ‘Citizen Kane.’ And then there’s that location work: outstanding, varied, totally real. ‘The Sorcerer’s Apprentice’ shoots the shit out of New York City and has some really wonderful texture. It’s just that the movie, no matter how handsomely filmed or now nifty the visual effects are, never transcends its inherent, mid-range junkiness. It’s a far better family film than, say, ‘Despicable Me’ or ‘The Last Airbender,’ but there’s very little in the way of genuine human emotion or identifiable situations. It’s like a magic trick: openly flashy, yet lacking in much-needed substance. Abracadabra!