For those who want to experience ‘Inception’ spoiler-free, you’re probably best advised to move on now. I’m going to try and tread lightly in my review, but I can’t promise that I’ll be completely pure. So come back after you’ve seen the movie. The review will still be here. I hope. You never know with those intrepid dream warriors. Click on!

Christopher Nolan’s breathtaking ‘Inception’ takes place in a world where private agents can slip into your dream and extract precious information. It’s a trippy conceit for sure, but one that writer-director Nolan makes absolutely real. At the beginning of the film, we see our two main characters – Cobb the extractor (Leonardo DiCaprio), and Arthur the point man (Joseph Gordon-Levitt) – as they attempt to scam a Japanese tycoon named Saito (Ken Wanatabe). Things go wrong. (Things I won’t be detailing here.) Once they’re out of the dream, they’re chased by various thugs, including Saito, who offers them an opportunity for redemption: the risky and potentially dangerous job of planting an idea in someone’s head. It’s called inception. And it’s very hard to do. 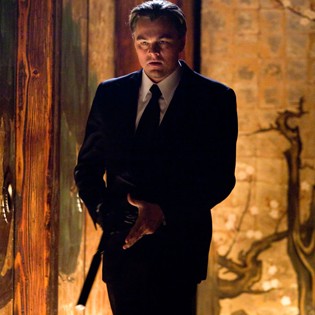 Saito is holding something very precious over Cobb’s head, so the film evolves into a “one last job” type “guys on a mission” heist movie, and sticks fairly close to genre conventions. I think this is actually a good thing, because the genre connection tethers the audience to the material. No matter how far-out things get in the dreams (and dreams-within-dreams), the audience can at least hang its hat on the ‘Ocean’s Eleven‘-y aspects of the movie’s plot. And that’s fine by me. Anyway, Saito instructs Cobb and Aruthur to assemble their team. Eames (Tom Hardy, irresistible) is the forger, a man that can impersonate people in the dream world. Ariadne (Ellen Page) is the architect, who designs the “levels” of the dream worlds. Yusuf (Dileep Rao) is the chemist, who concocts potions to keep the mark – the young heir to an energy company, Robert Fischer Jr. (Cillian Murphy) – deeply asleep. Saito also tags along in the dream world, this time as a tourist.

Once the actual mission begins, which takes up about the last 45 minutes of the movie, your jaw will be on the floor. The staggering complexity of the thing, which involves dreams-within-dreams-within-dreams, is just mind-blowing. Nolan constructs each dreamscape to be as identifiable and realistic as possible, and to have an unflappable internal logic. (Just because you don’t “get it” doesn’t mean it’s not there.) Those that claim that the movie is too “somber” or that there aren’t any laughs certainly weren’t in the packed critics-and-VIPs screening I attended. (Kathryn Bigelow was in attendance.) Every hiccup in our dream thieves’ plan got a gasp, every funny moment got a roar of laughter, and every appearance of Marion Cotillard – as a femme fatale who haunts the dream world – got an uneasy shifting in the seats.

Christopher Nolan has made bigger and bigger movies while remaining concerned with only a handful of thematic ideas: the price of guilt, say, or the power of magic. What’s so amazing is that the scale of the movies, while ever growing, never loses sight of these core ideas. It’s rare enough for a big budget spectacle to have a brain at all, but to have one that is so focused on these concepts… well, that alone is enough to blow your mind. The other chief complaint about the movie seems to be its perceived “chilliness,” which certainly wasn’t helped by early Kubrick comparisons. This I also have trouble swallowing. There are two emotional through-lines in the story, one involving Cobb and the other involving Fischer. Neither of these I’m entirely comfortable discussing, but both really do have an emotional punch. Even in the extended climax of the movie, with action delivered over several separate realities, you are clearly rooted and invested in what’s going on. It’s not going to make you bawl, but it will get you involved for sure.

The cast is great, too. I’d say that Joseph Gordon-Levitt and particularly Tom Hardy (who gets the biggest dialogue-driven laugh) are the standouts, but everyone does a really great job. Even Ellen Page, who hasn’t been given the best material post-‘Juno‘ (save for the wonderful and wholly overlooked ‘Whip It‘) and who is here saddled with the wide-eyed Luke Skywalker/Neo role of the audience surrogate, is really excellent. She’s cute and smart and the last person you want to see corrupted by the morally ambiguous nature of the mind crimes these guys pull all the time.

The spectacular nature of the dream sequences, and conversely their subtlety, is what makes the movie so rewarding on a visual level. For much of the film, I just sat and watched with a stupid grin on my face, because everything was just so cool. I guarantee that you’ve never seen a movie quite like this. (Or heard one like it either, with Hans Zimmer’s thunderous electronics-and-orchestra stuff.) Just to see a movie that isn’t based on a video game, or segment of ‘Fantasia,’ or breakfast cereal mascot is something of a relief. But to see a work as profoundly brilliant, challenging and unique as ‘Inception,’ well, that’s a dream come true.