Next week sees the release of ‘Warhammer 40,000: Space Marine’. In my book, this videogame has been flying very low and has only occasionally peaked its head up and onto my radar. Last week, THQ (‘Saints Row’, ‘Homefront’, ’50 Cent: Blood on the Sand’) released a PS3 and Xbox demo for the retail game that reviewers went nuts for. I had a slightly different take.

First, a little background that I gleaned from the ‘Space Marine’ Wikipedia page. It would seem that ‘Space Marine’ started as a tabletop game (not unlike ‘BattleTech’ or other miniatures-based games). The first of these, ‘Warhammer 40,000: Rogue Trader’, came out in 1987. The ‘Warhammer 40,000’ world has also been in and out of computer/videogames starting with ‘Space Hulk’ for MS-DOS and Amiga in 1993. There have been PS2, PSP, Nintendo DS, and a couple of PC/Microsoft games as well. As far as I can tell, ‘Warhammer 40,000: Space Marine’ will be the first version available on Xbox. 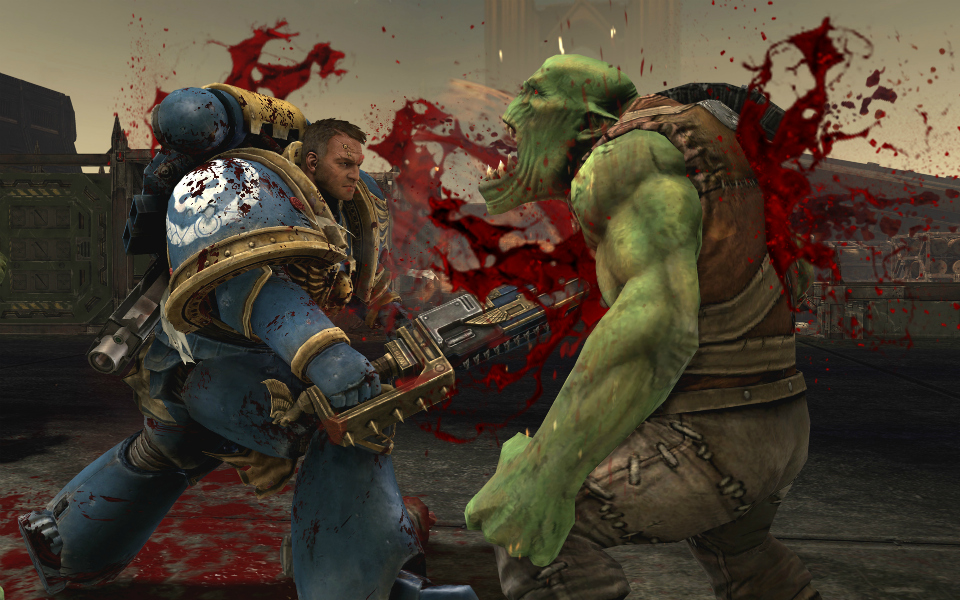 Now, if you have been even remotely aware of this upcoming game, you will have inevitably heard the comparisons to ‘Gears of War’. With very similar oversized, armored soldiers in a third person shooter environment, it simply cries out as being a copycat. I’m here to tell you that it’s not a copy. Instead, it’s a very close facsimile with a bit of other popular games mixed in.

I’m finding it hard to believe that other reviewers were impressed by this single-player demo. I found it rather tame and monotonous. Its only “innovation” is that it’s a hybrid of two better games. Yes, it is painfully a lesser version of ‘Gears of War’. However, the developers decided to throw in a big chunk of the hack-and-slash melee mechanics from ‘God of War’. Far too often, I found myself in the middle of a zillion fairly weak baddies, and all I had to do was swing around my power baton chainsaw stick (or whatever it was that I started off with). Before too long, I was stomping merrily along to my next objective. Speaking of stomping, there are finishing moves. Yup, you can punt a baddie’s head or curb stomp your latest fallen, all in a “I’ve sooooo seen this before” fashion.

So, is it grisly? Indisputably. It has lots of blood and gore. How are the graphics? Not bad, pretty fluid. I didn’t notice anything out of the ordinary that might take away from an otherwise likable view of this world. Are there lots of guns? Not quite sure. The demo didn’t have many to pick up along the way. Lots of ammo lying around, but only a few different guns. All the controls felt familiar, which I like. Everyone knows that A (Xbox)/X (PS3) is “Jump,” but the character’s reaction to these controls felt a little clunky. The rolling leap that substituted for “Jump” was also a bit wonky.

Even the plot line of the demo is very similar to just about every other TPS/FPS game. Ok, you’ve blasted through the first wave of orcs. Now it’s time to find the experimental device that’s just lying around through probably another wave of orcs, until you will probably meet a really big orc in order to collect said experimental device. Rinse and repeat.

Is there anything I haven’t seen before in this game? Well, if you pre-order, you will get the Golden Relic Chainsword, which I can’t recall ever seeing in another game. Unless you count the chainsaw on the end of the standard issue Lancer Assault Rifle from ‘Gears of War’. Yeah, there isn’t really anything that you haven’t seen before. However, if you like ‘Gears of War’ and/or ‘God of War’, it’s conceivable that you might enjoy the demo of this one. I would strongly suggest giving it a try before you buy.