A recent poll we ran a couple weeks ago about discs in collectible packaging got me to thinking about the many elaborate DVD, Blu-ray and even Laserdisc box sets that I’ve bought over the years (imported from other countries in many cases) that are currently collecting dust in my home theater room. I figure that this would be a good opportunity to pull some of them off the shelf and take another look inside. For our first post in the “Unboxed” series, let’s open up the ‘Kill Bill’ DVD box sets from Japan.

Quentin Tarantino’s ‘Kill Bill’ movies are distributed in Japan by Universal. (Buena Vista has the North American rights.) The Japanese ‘Kill Bill, Vol. 1’ DVD contains the international cut of the film with the full-color, slightly more violent “House of Blue Leaves” fight scene. The ‘Vol. 2’ DVD has also been bizarrely extended for a few extra seconds of pointless establishing shots during one scene. Universal released both movies in standard DVD keepcases, or in these fancy box sets. 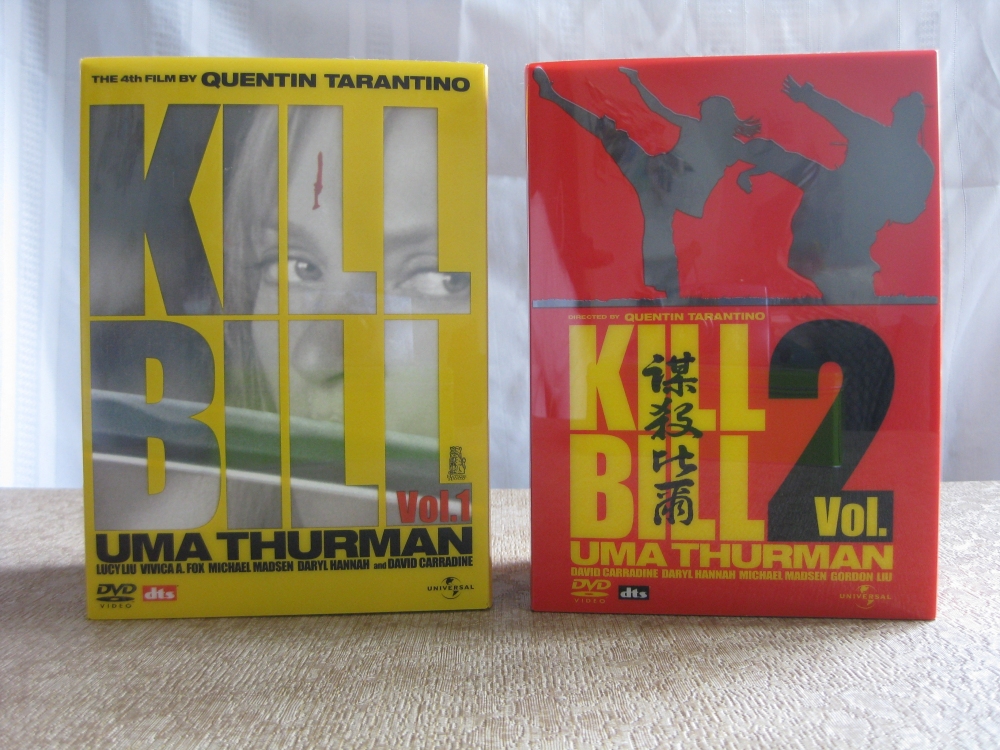 Here’s a look at the ‘Vol. 1’ box set with the original obi strip attached. The obi is a strip of paper with product details that wraps around the item being sold. Many buyers throw these away, but some collectors consider them important to save. Sadly, I wound up tearing the ‘Vol. 2’ obi when I tried to put it back on the box. 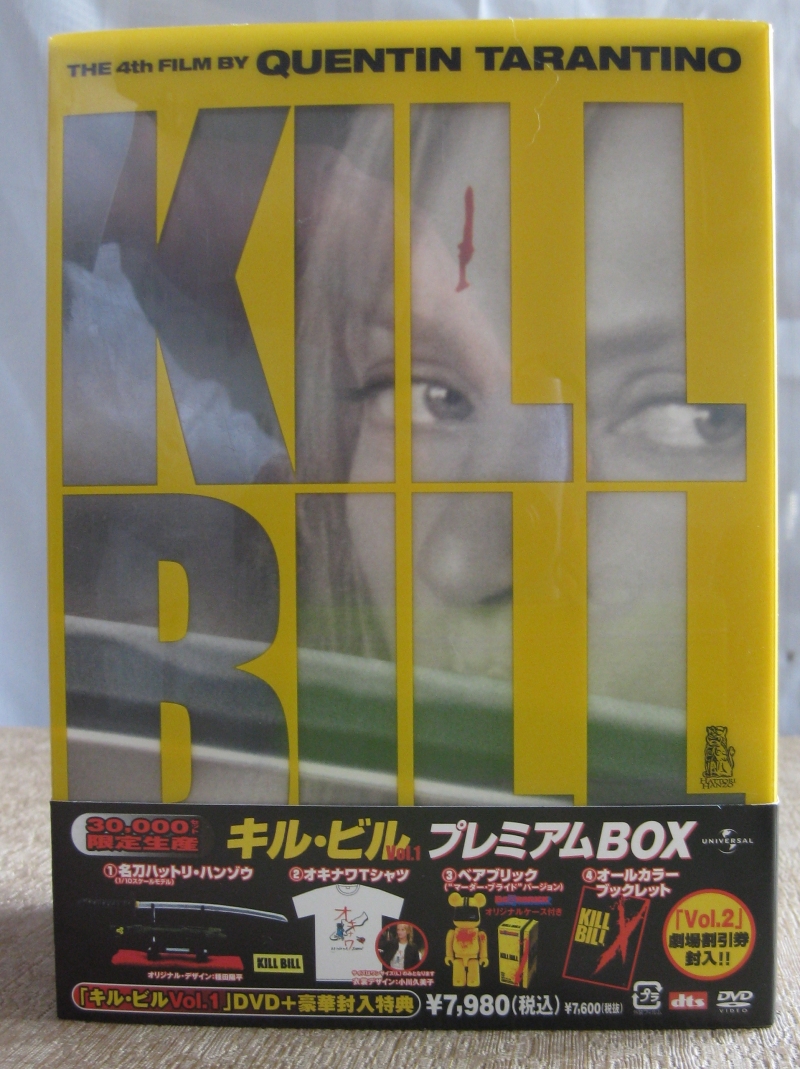 Here’s a shot of the box set artwork when you remove the plastic slipcovers: 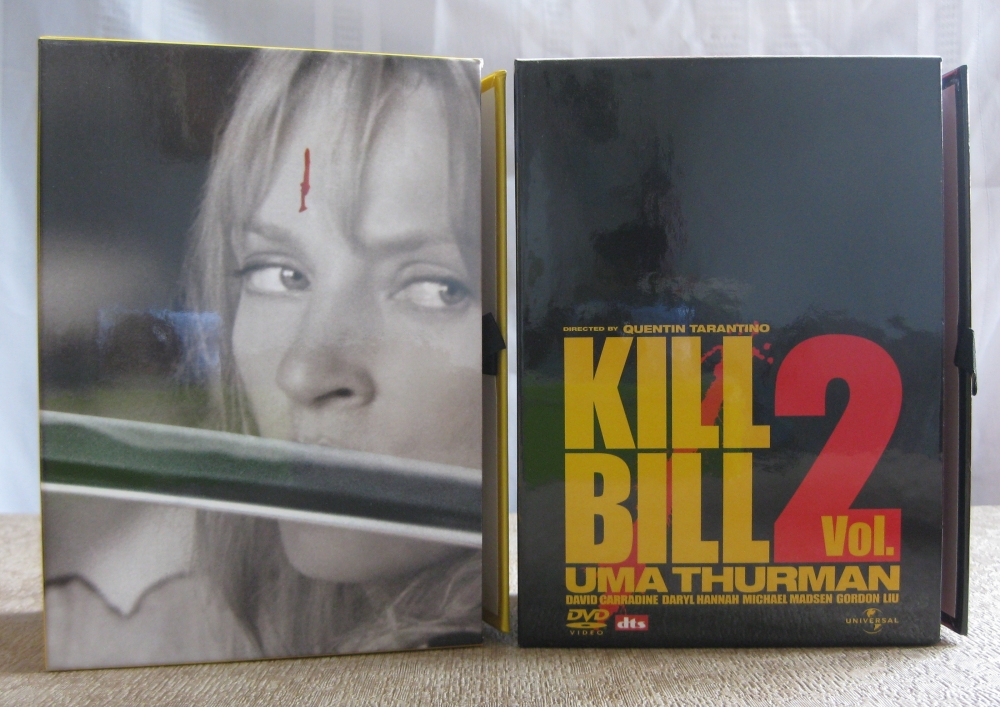 The ‘Vol. 1’ box set has a neat feature on the back. When you pull up the slipcover, it appears to unsheathe the sword beneath from its scabbard. 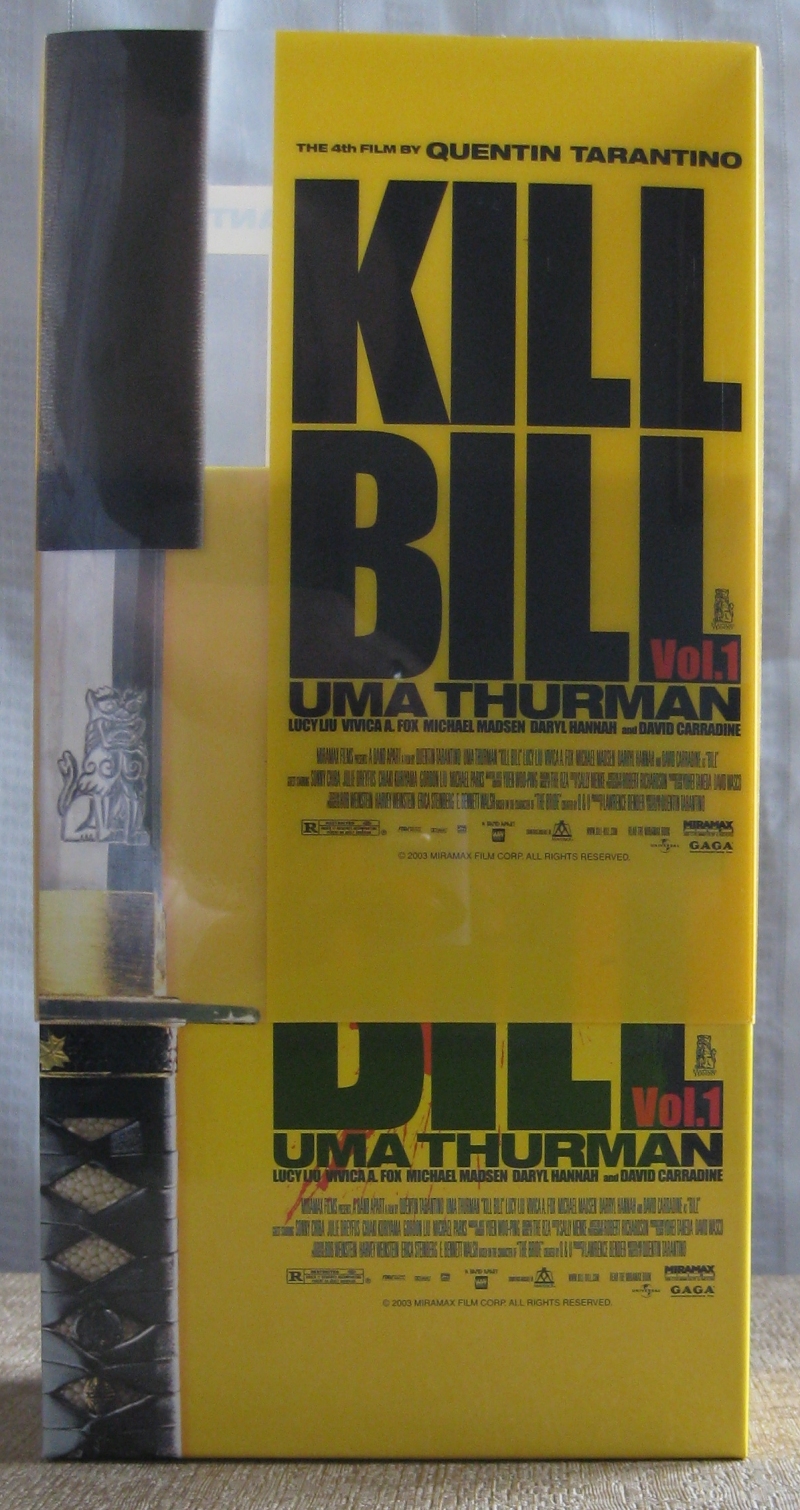 Here are the DVD and some of the contents from the ‘Vol. 1’ box: 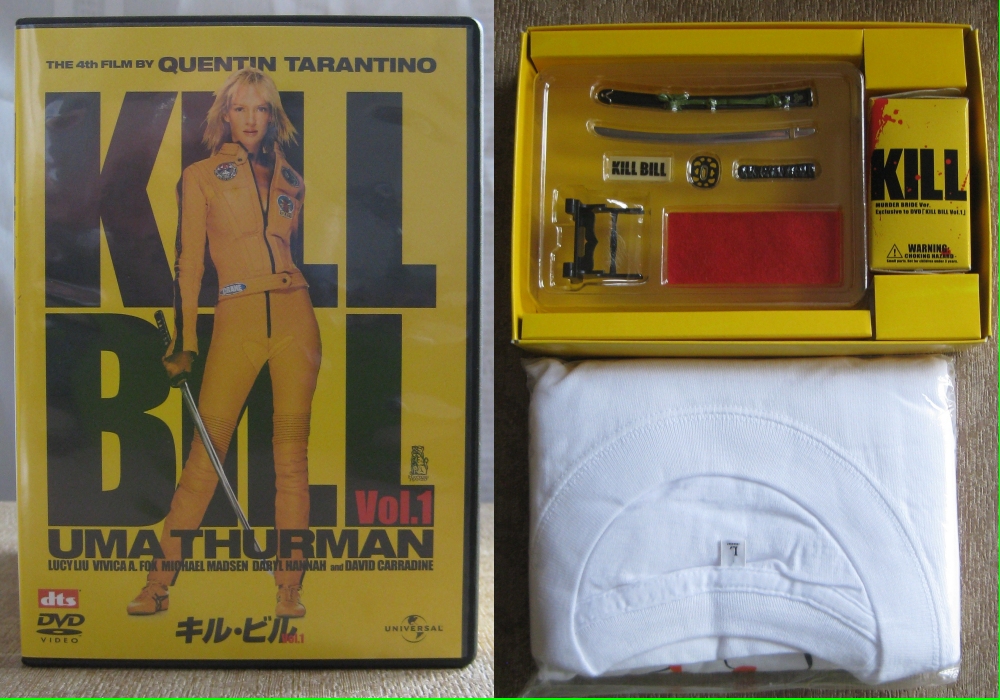 Vol. 1 comes with a Bearbrick figure (called the “Murder Bride,” recommended for ages 14 and up!) and a miniature sword playset. Unfortunately, the bear can’t hold the sword.

The T-shirt in the box set is based on one that The Bride wears briefly in ‘Vol. 1’. It’s a Japanese size Large, which probably equates to about an American Medium. 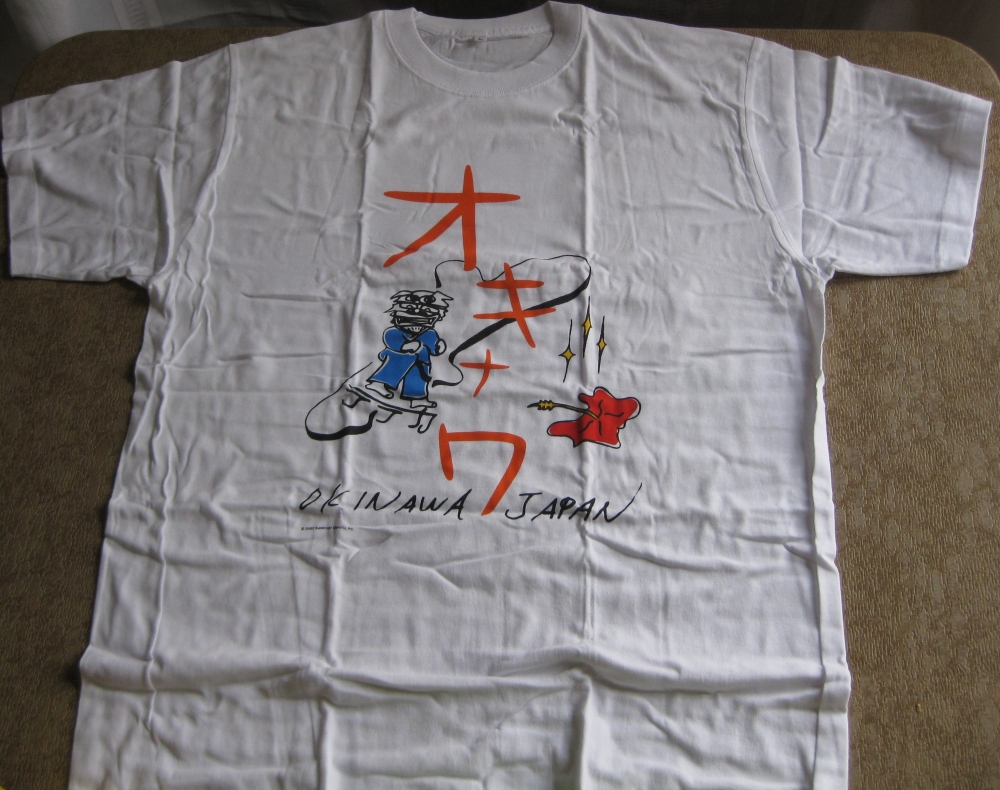 Here are some of the contents of the ‘Vol. 2’ box: 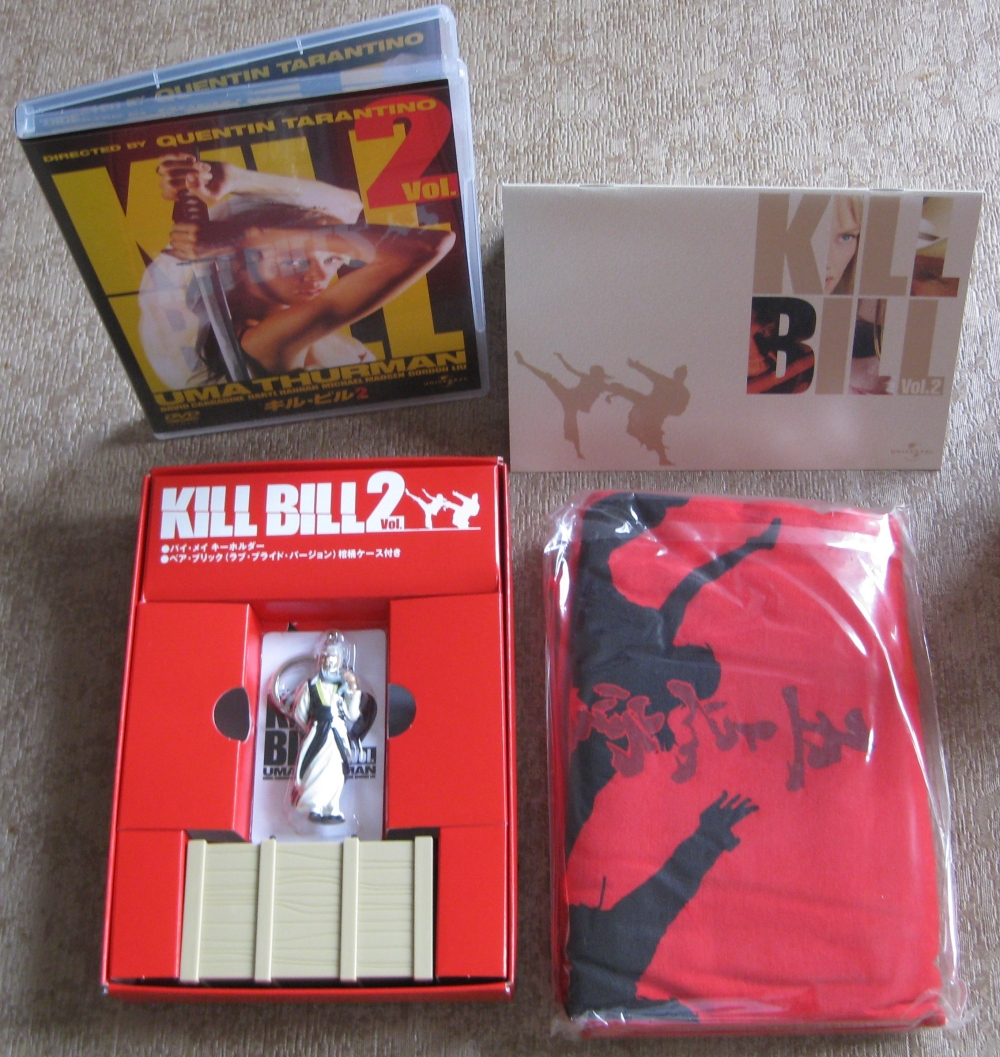 ‘Vol. 2’ comes with a different Bearbrick, a coffin to bury it alive in, and a Pai Mei keychain. 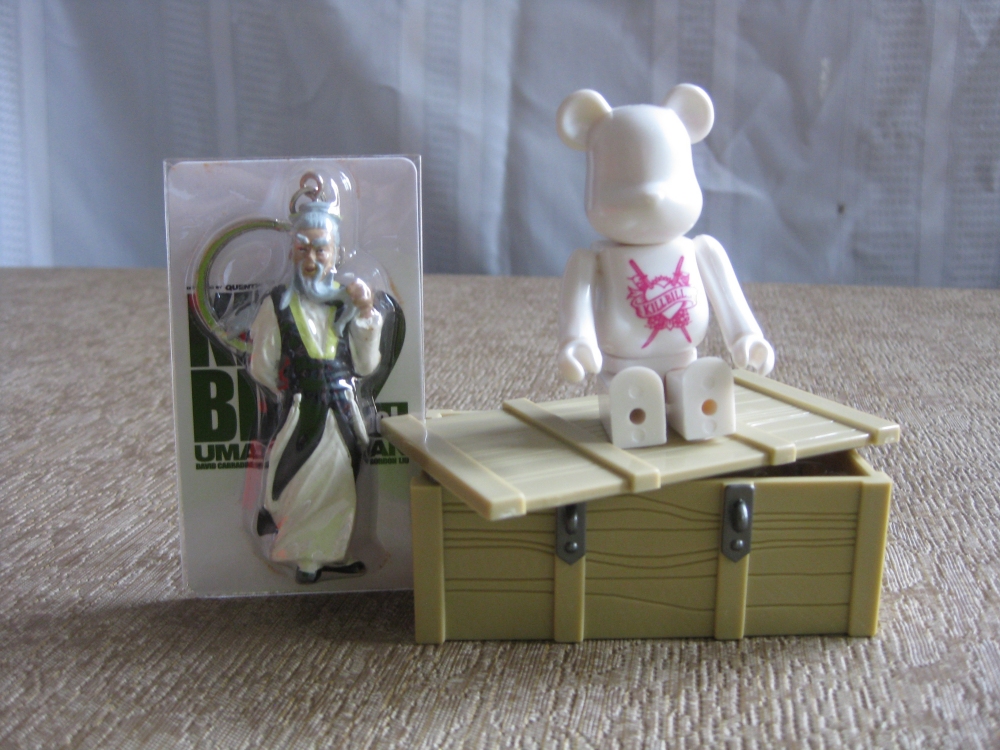 It also has a selection of character bio cards. 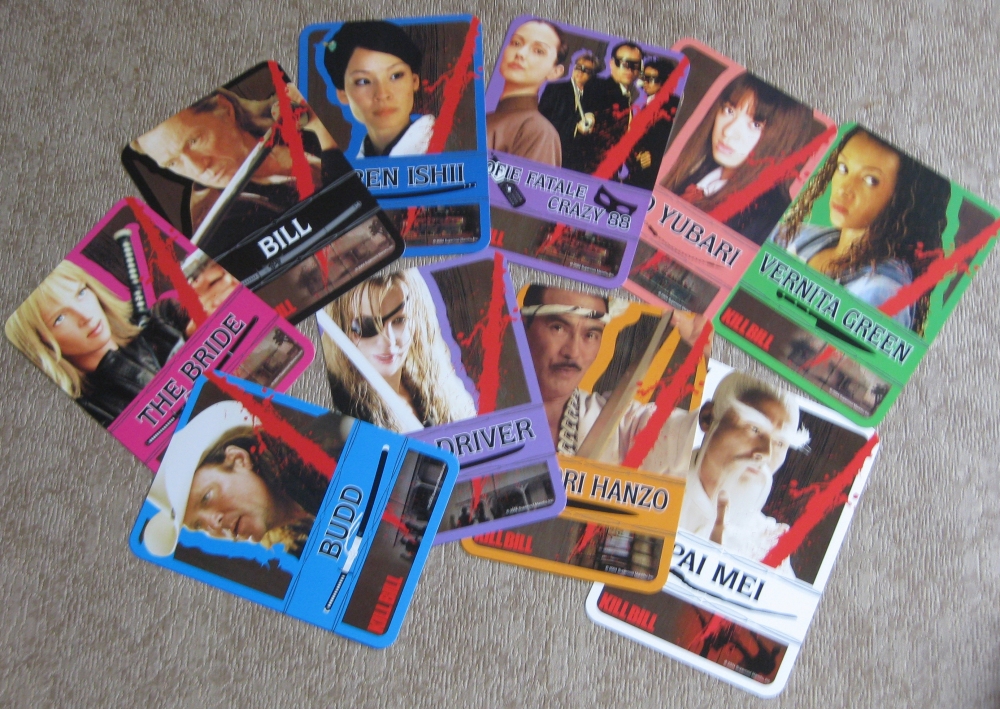 The ‘Vol. 2’ T-shirt is a Japanese Medium, which is more like an American Small. 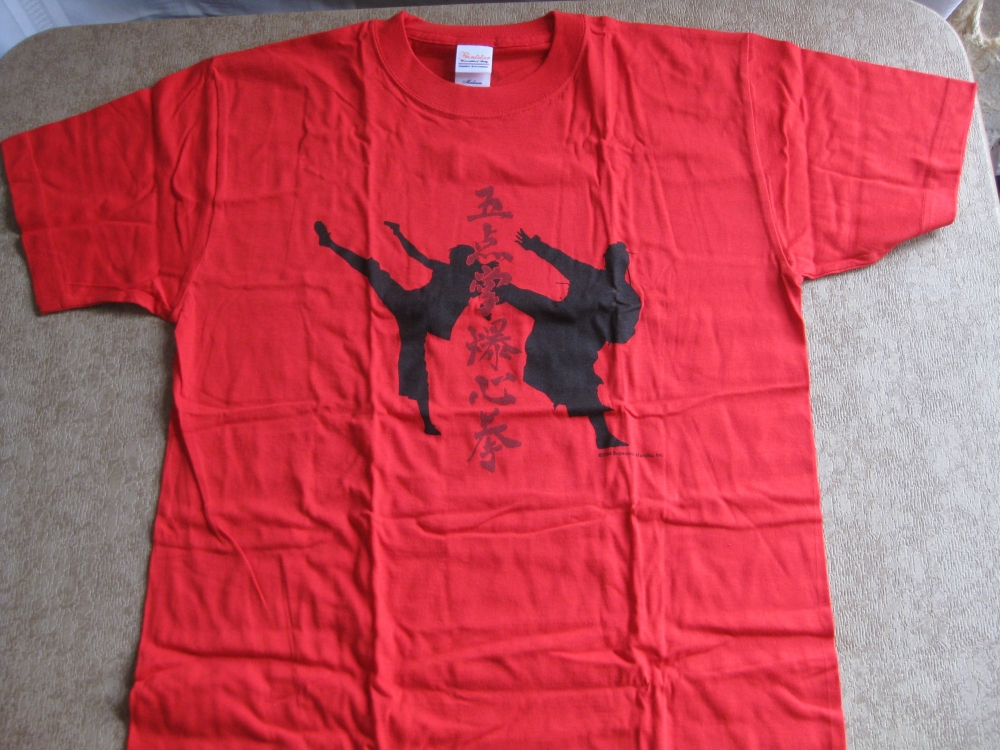 I don’t honestly remember whether this goofy DVD “Rider Suit” jacket came with the Japanese box set or if I obtained it separately. I believe it was a retailer exclusive, but I could be misremembering that. It will squeeze into the ‘Vol. 1’ box set, in any case. 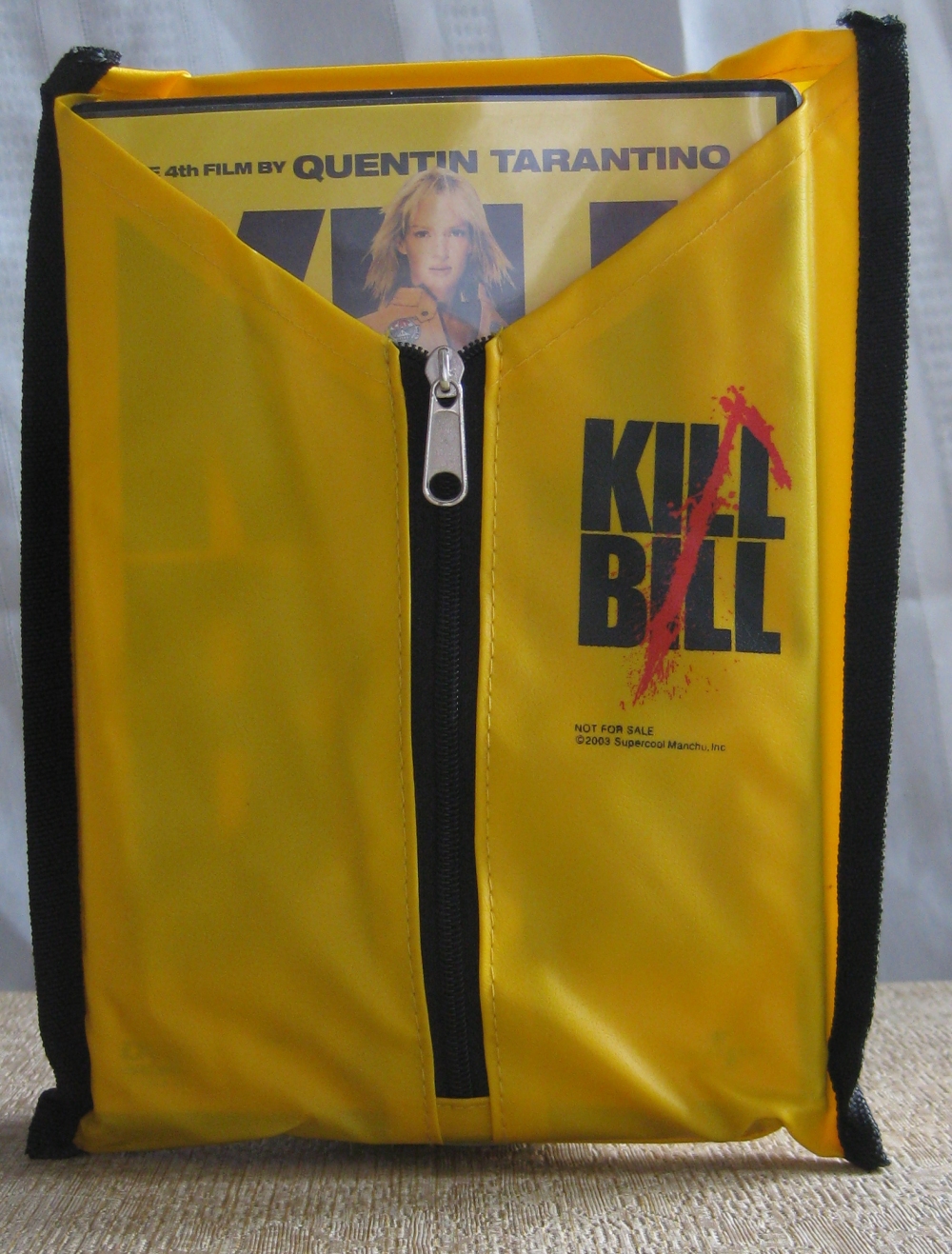 I’m glad that I took the time to do this. I haven’t looked inside these box sets in ages. I hope you enjoyed it too.