As much as I may appreciate a good box set, even I have to admit that home video studios sometimes go too far in the attempt to turn a movie release into a valued collectible. Take, for example, the case of this ‘Infernal Affairs Trilogy’ box set from Hong Kong, which may be one of the most needlessly overpackaged collections of DVDs ever released. That didn’t stop me from buying it, of course.

Most American viewers will know ‘Infernal Affairs’ as the Hong Kong suspense drama that Martin Scorsese later remade as ‘The Departed‘. Setting aside the arguments that fans of each version continue to wage, ‘Infernal Affairs’ is a tightly-written, tautly-directed thriller with fantastic attention to the psychological depth and personal relationships of its characters. As one of the most popular Asian films of 2002, it was quickly followed by two back-to-back sequels. Rather, it was followed by one prequel and one in-between-quel. While neither of the follow-ups is quite as good as the first movie, together they assemble a truly epic and ambitious crime drama rich with themes of honor, loyalty, morality and family. The ‘Infernal Affairs Trilogy’ is the Chinese equivalent of the ‘Godfather’ saga.

All three films were initially released as separate 2-disc DVD editions. Later, Media Asia compiled the whole trilogy for this Limited Edition 8-disc box set. Each movie gets its own disc plus one individual disc of bonus features dedicated to that entry. The final two discs in the set contain a consolidated 5-hour miniseries re-edit of the trilogy, in which all of the scenes have been re-arranged into chronological order (much as had been done for some TV airings of the ‘Godfather’ films). That miniseries version was exclusive to this box set for a time, but I believe that it eventually got released separately.

As I mentioned, the packaging is a bit excessive. We start with the fact that the whole thing comes in a big cardboard box. At a first glance, the box merely appears to be a flat gray in color, with some artwork that looks like bullet holes. (Click on any of the following photos to enlarge.) 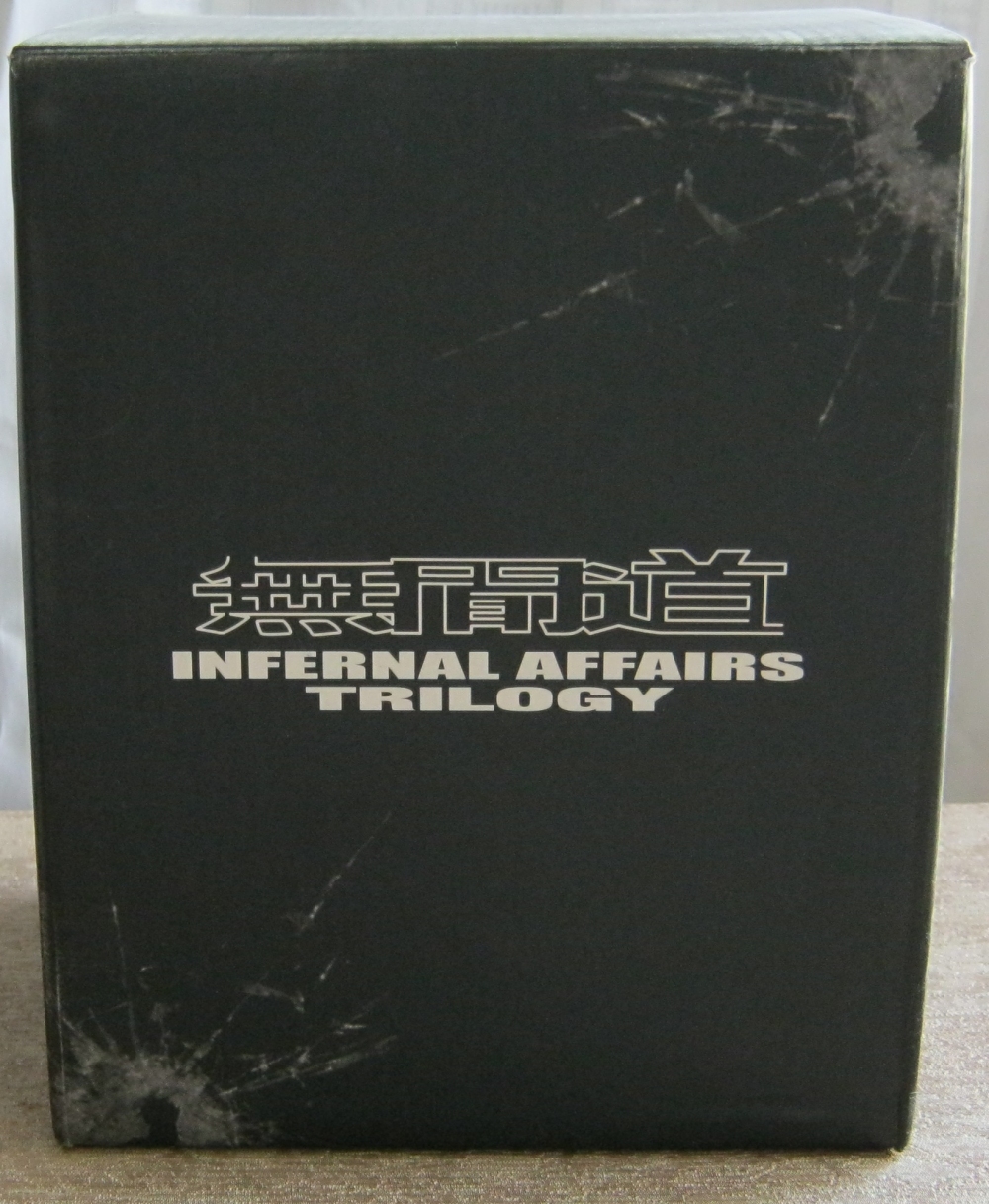 If you look at the box closely and in the right light, you can see that it also has faint images of the characters printed on the sides. They come out very clearly in the following two photos, but if you looked at this in the wrong light, you might not see them at all. It’s actually a clever design. 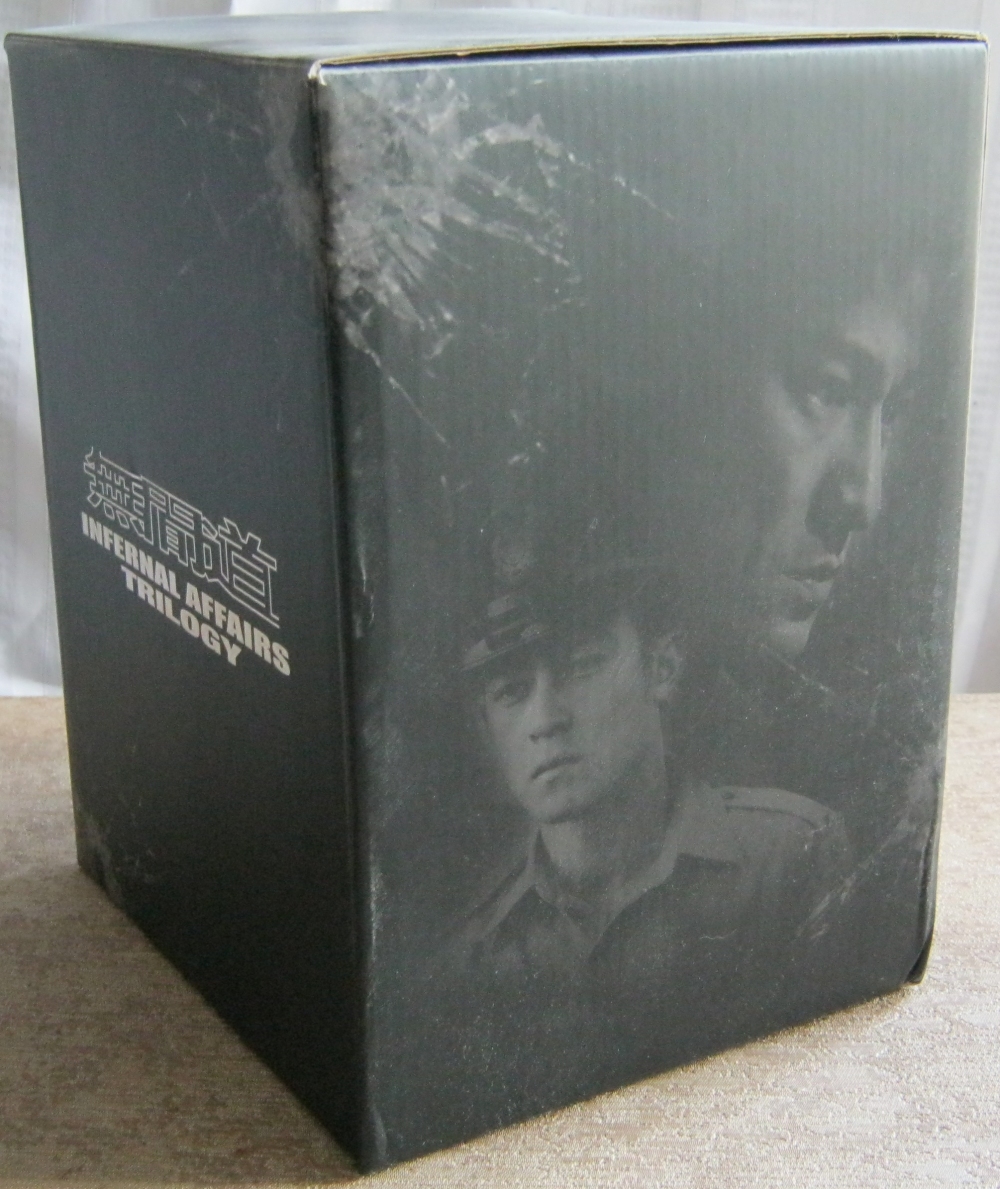 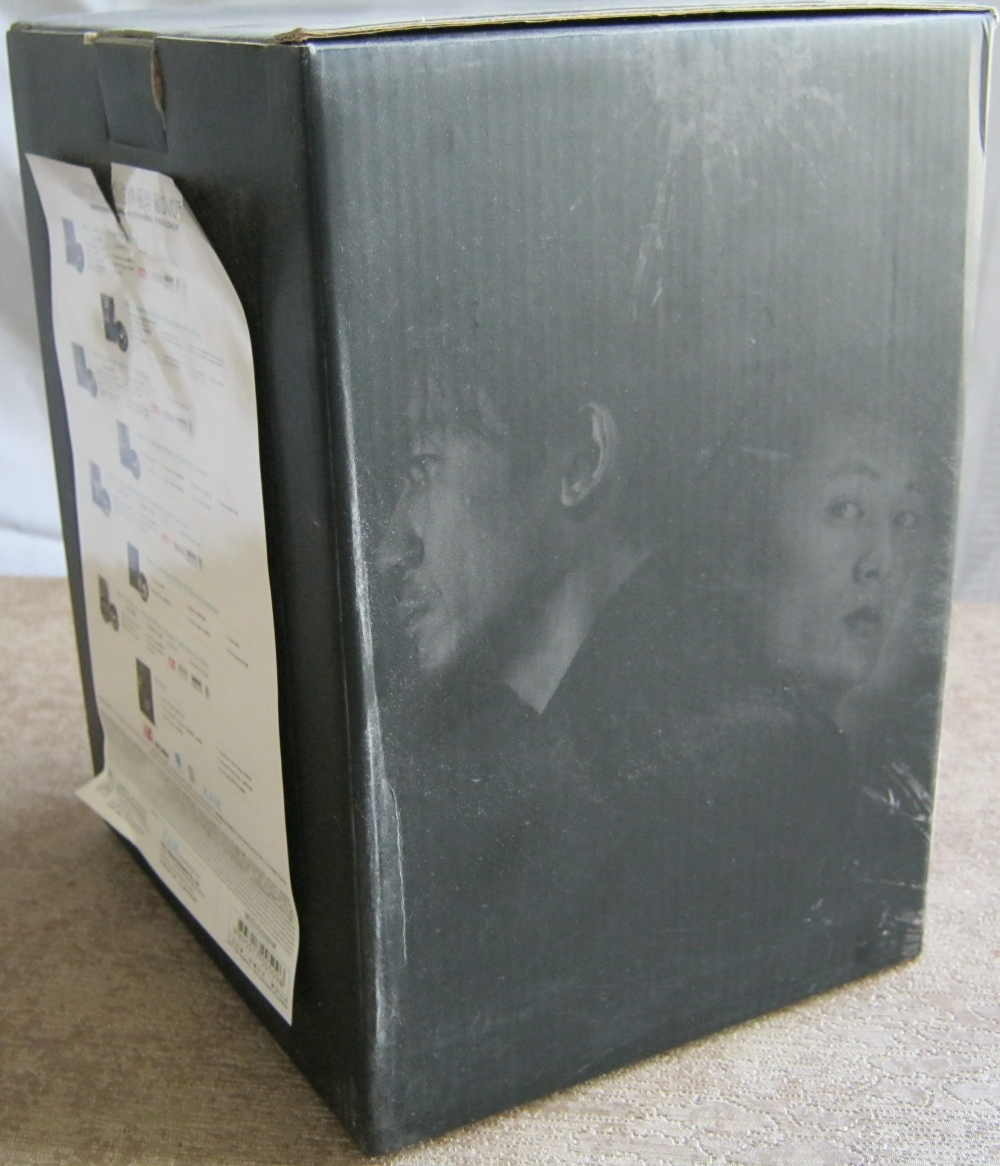 I kind of get the feeling that the box itself was meant to be discarded, but that seems crazy to me. Inside it (cocooned in black bubble wrap) is another box, this one made of shiny hard plastic. I’m pretty sure that this is the one you’re supposed to put on display. I have nicknamed this “The Monolith.” 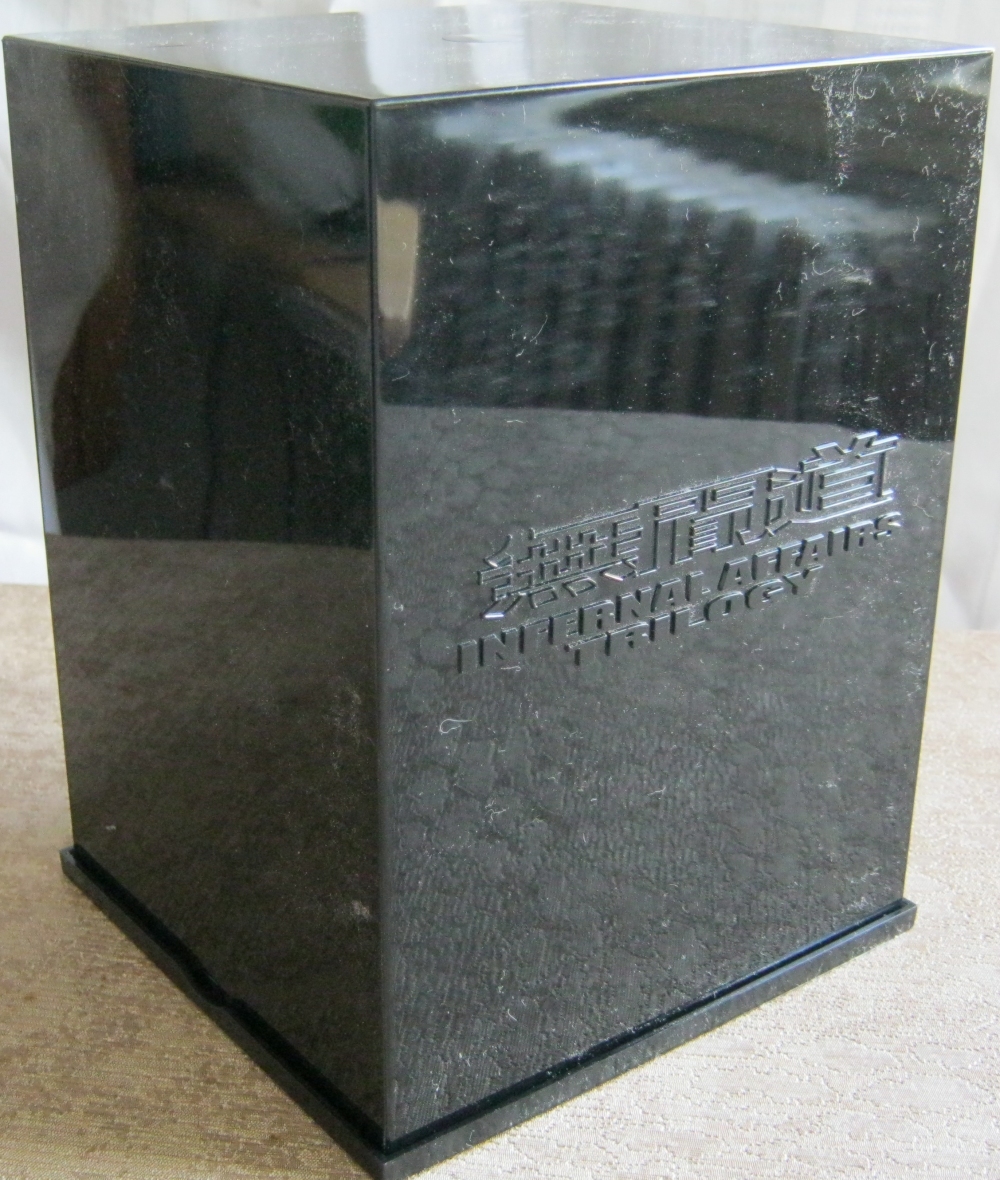 As you can see in the photo, the outer shell is a terrible dust magnet. I actually attempted to clean it prior to taking this picture, but this is still what I got.

Once you lift the outer shell, inside is what I refer to as “The Shrine,” which holds seven DVD cases and a photo album. The first six cases hold one disc apiece and the last has both parts of the miniseries. This is a foolish waste of space. The packaging would be a whole lot more space-efficient if it had simply used four dual-disc DVD cases. I fail to see the need for each supplement disc to get its own case. 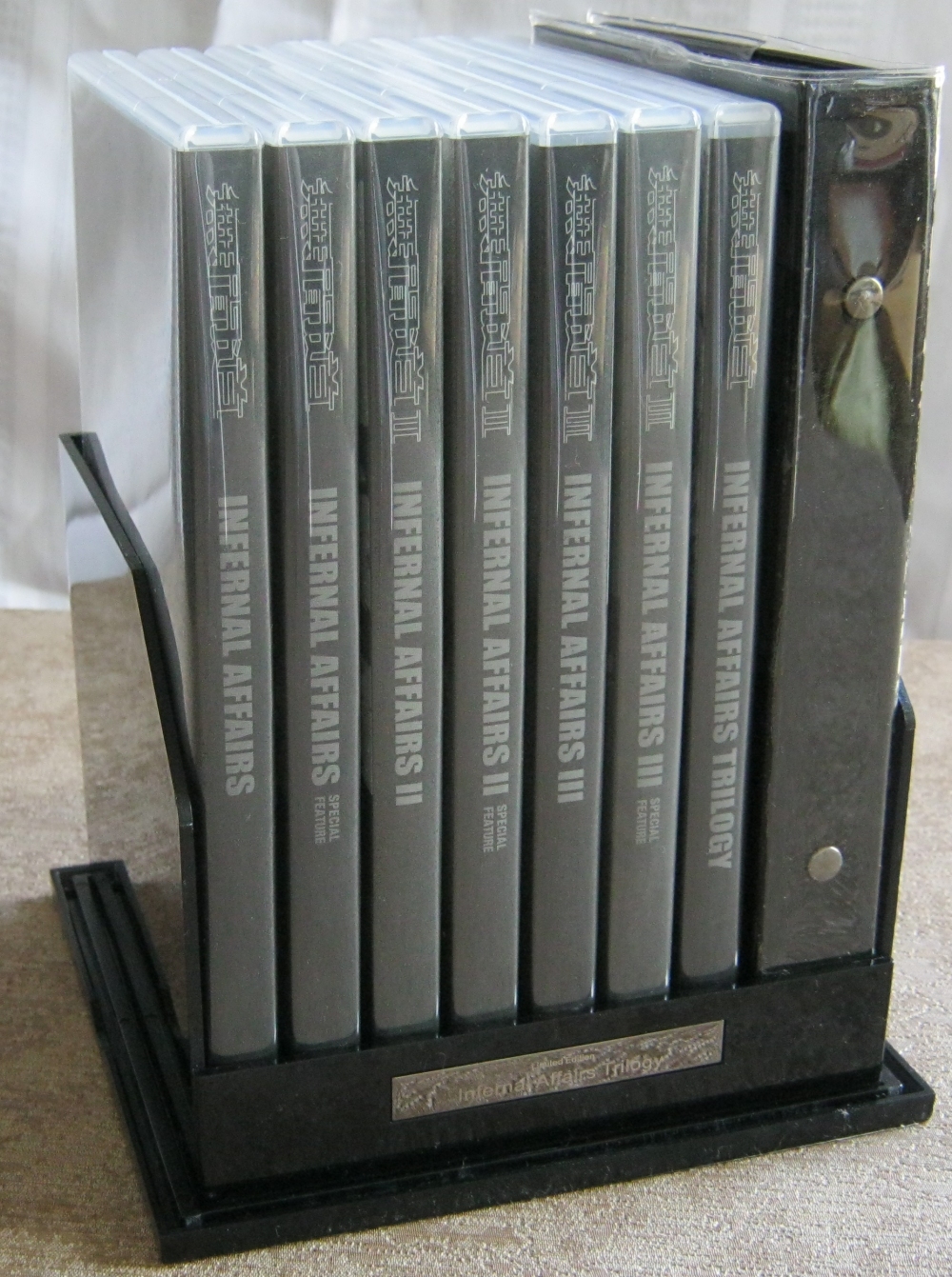 The cover of the photo album is very reflective and hard to photograph. 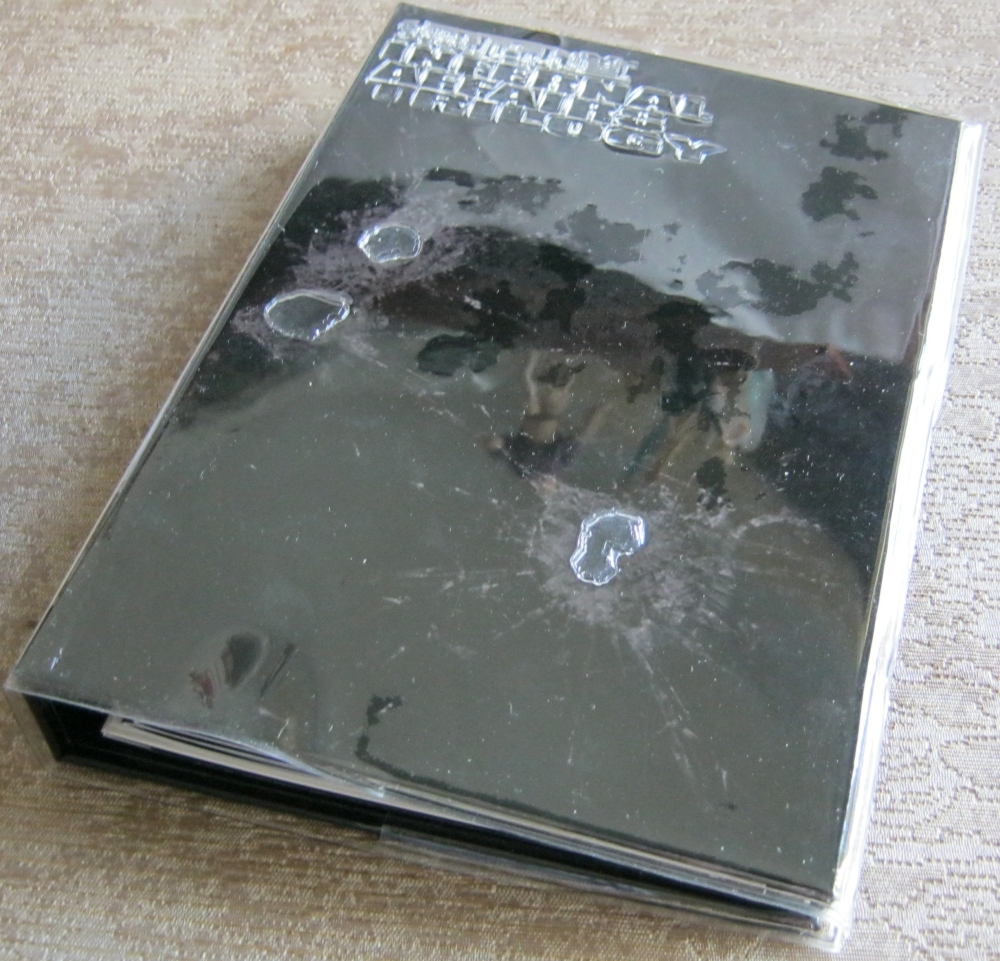 Here are some sample pages of the interior contents: 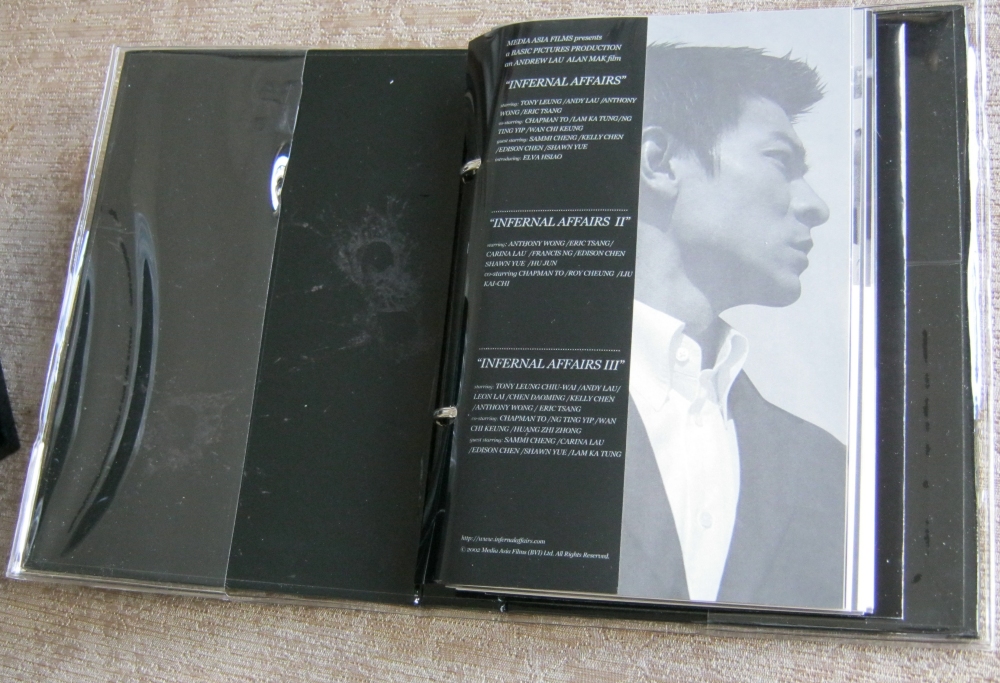 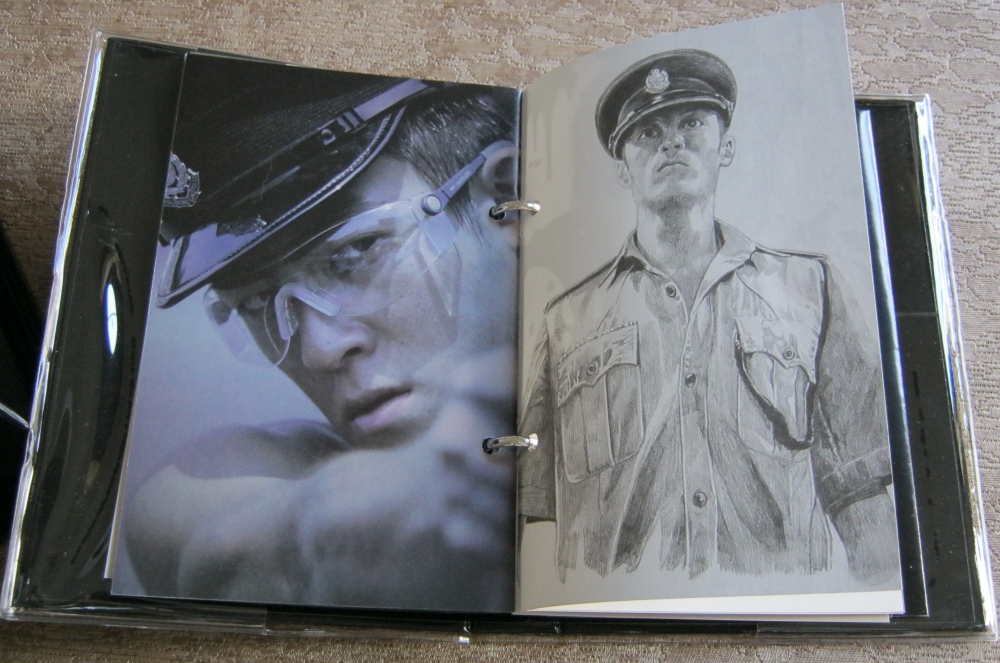 The seven DVD cases all have character photos on both the front and back: 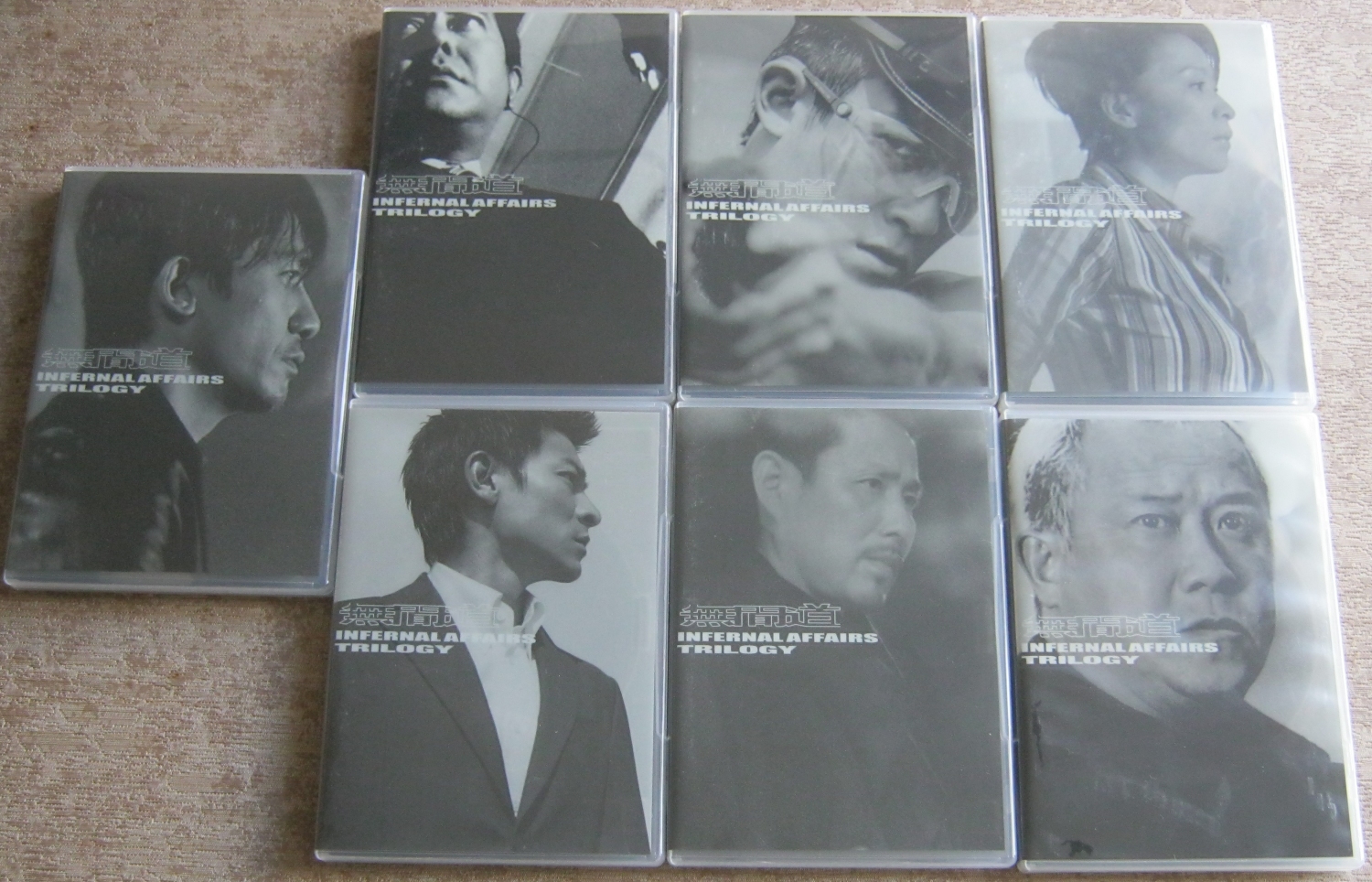 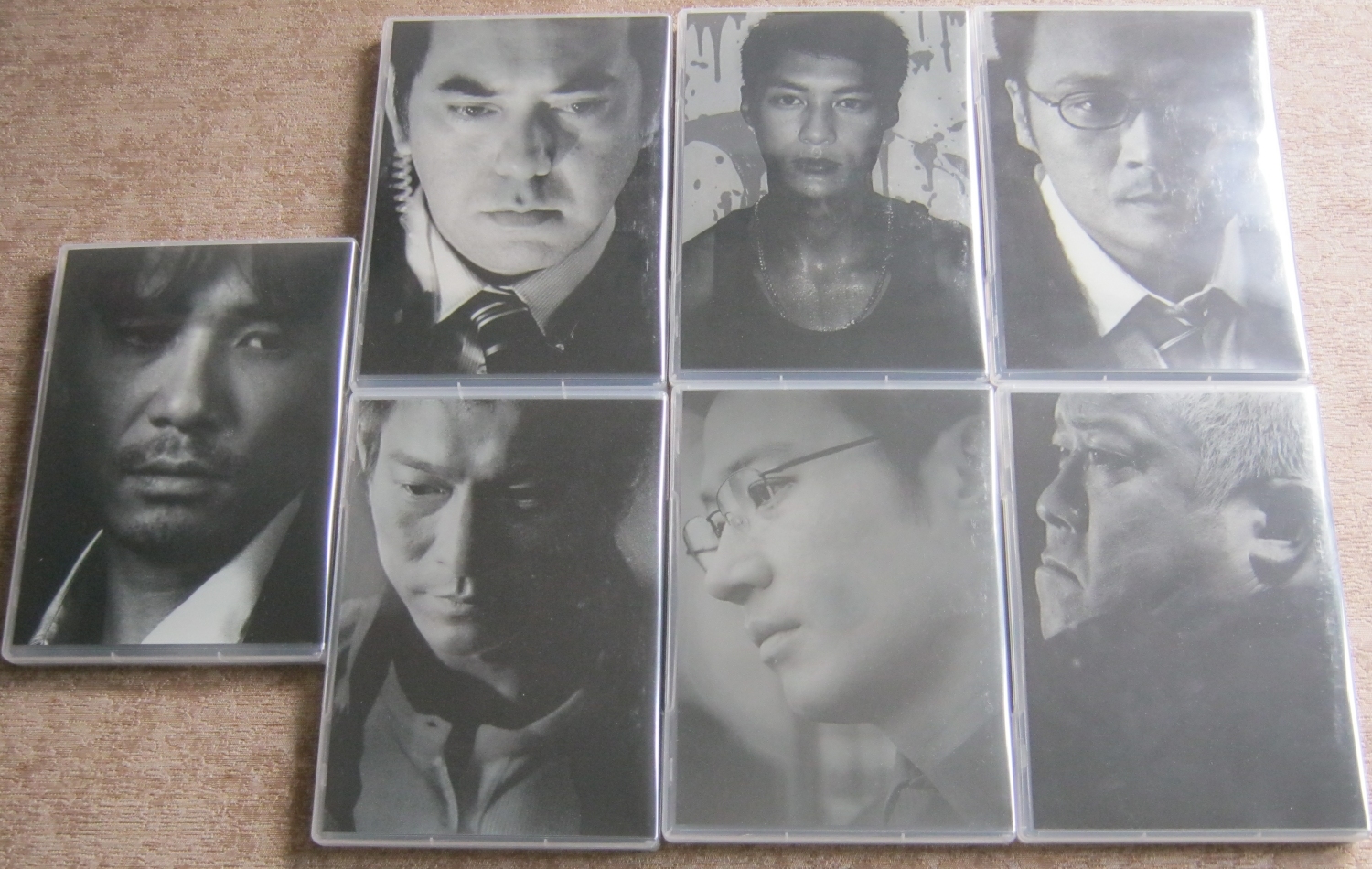 Finally, here’s a look a the artwork printed onto the discs themselves: 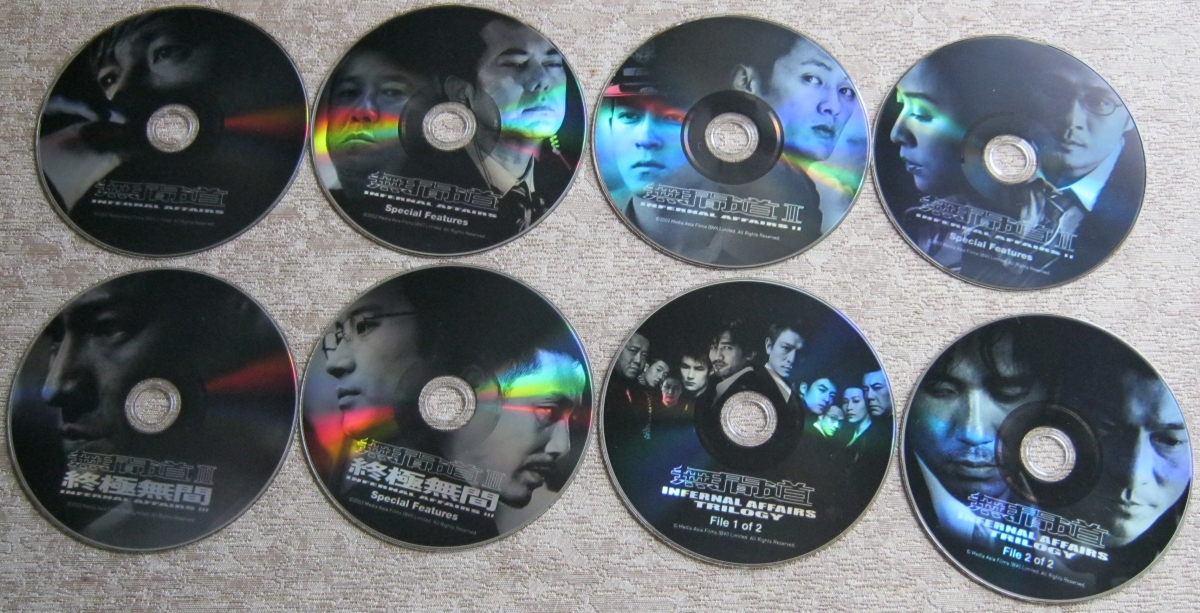 For a full breakdown of the disc contents, you can see the review I wrote when I worked for DVDTalk.

The ‘Infernal Affairs’ films were so popular that they received a number of different DVD releases over the years, both as individual editions for each movie and box set compilations. To my knowledge, this was the most elaborate.

The first film was released on Blu-ray by Lionsgate here in the United States, but neither of the sequels has been so far. For the complete trilogy, seek out the Hong Box Blu-ray box set. It may not have the fancy packaging of this DVD box and may not include the miniseries edit, but it’s currently the best way to get all three movies in high definition.