In this new installment from the “Unboxed” series, I’ll pull another of my import DVD box sets off the shelf to take a look at the contents. After all, what’s the point of having these things if I don’t at least look at them every once in a while? Today’s subject is the six-disc ‘Grindhouse’ DVD box set from Japan.

When Quentin Tarantino and Robert Rodriguez teamed up for 2007’s theatrical release of ‘Grindhouse’, their intent was to create an homage to the trashy exploitation flicks that were commonly paired up in double features during the 1970s. Their movie was constructed of two separate 90-minute features run back-to-back with a smattering of fake movie trailers in between. Unfortunately, teenage moviegoing audiences didn’t get the joke, and the film was a box office flop. Mistakenly placing the blame on the double-feature format, producers Bob and Harvey Weinstein split the two halves apart and released each to home video separately, with some additional scenes and extensions to pad their running times a bit. For about three years, this was the only way that American audiences could see the individual parts, ‘Planet Terror‘ and ‘Death Proof‘, on DVD or Blu-ray.

During this time, the only official home video release of the film’s original three-hour theatrical cut was this elaborate six-disc DVD box set released in Japan. The package includes the theatrical cut of ‘Grindhouse’, as well as the extended cuts of ‘Planet Terror’ and ‘Death Proof’, each on its own DVD. The remaining three discs are devoted to the bonus features for each. All of the discs in the set are locked to Region 2 and have Japanese-language menus. However, as you’ll see, the packaging is very English friendly.

Eventually, Vivendi Entertainment released the theatrical cut of ‘Grindhouse‘ on Blu-ray in North America as well. That disc came packaged in a slipcover sleeve that clearly mimics the design of the Japanese box. Yet the Japanese set is significantly more elaborate overall. Click on any of the below photos to enlarge.

This is the DVD slipcover with the inner digipak poking out. The wear and tear on the artwork is a fully intentional part of the design. 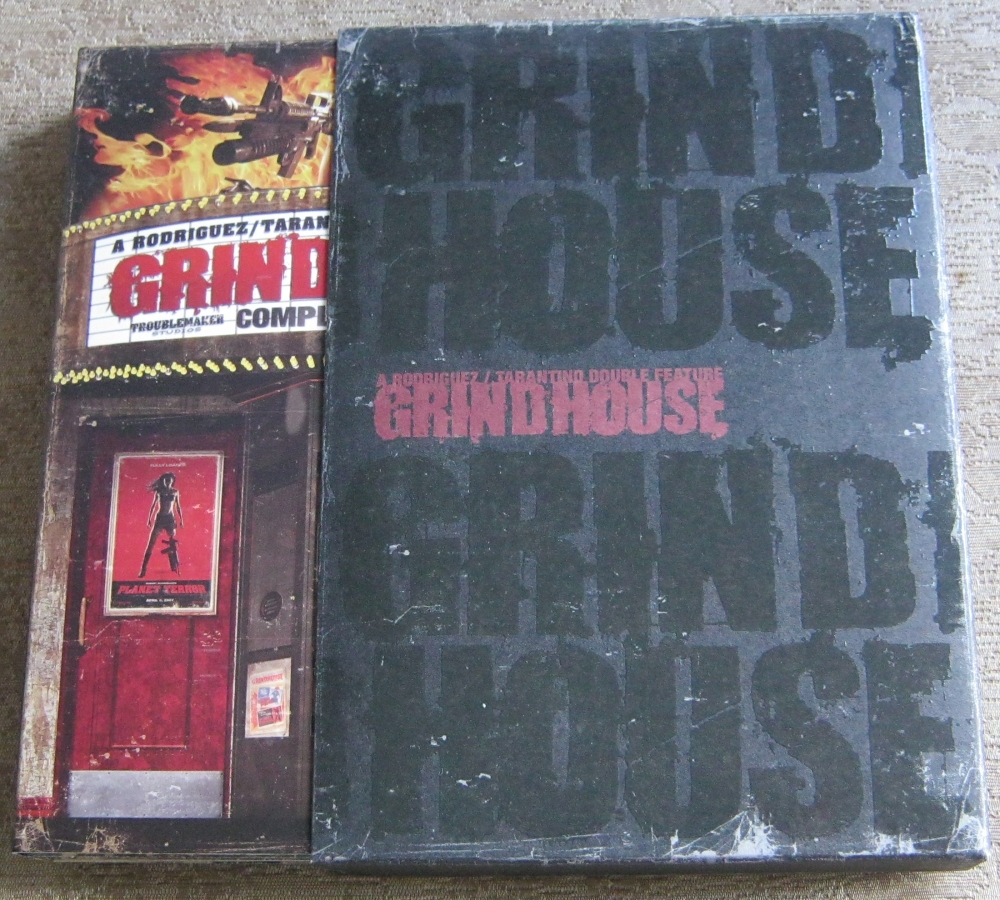 Here’s the front of the digipak, which is cleverly designed to look like a movie theater marquee. If you look closely, you’ll see a tiny poster for ‘Machete’ in the lower middle. ‘Machete’ started as just a fake trailer that played at the beginning of ‘Grindhouse’, but was later expanded into its own separate feature film. 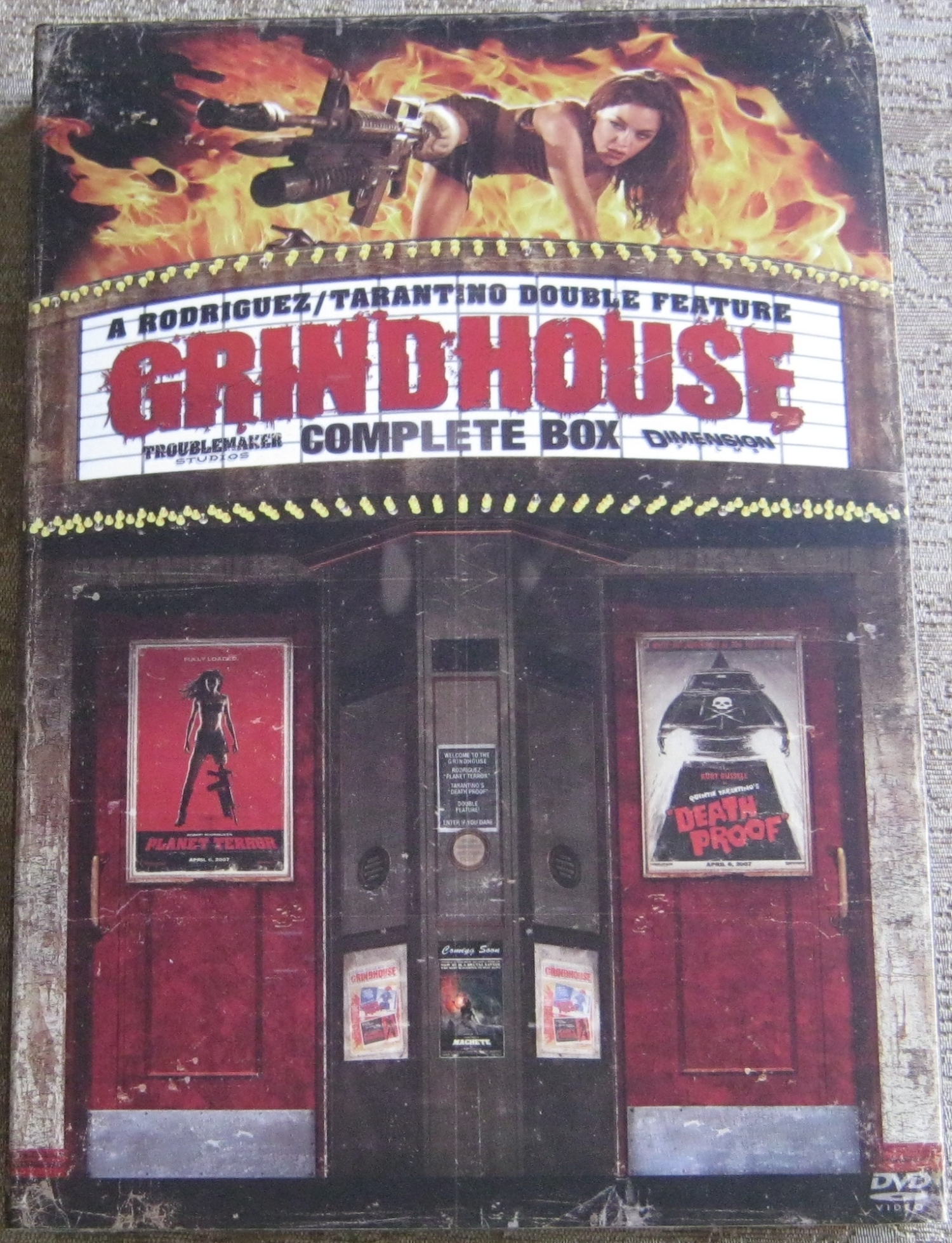 Flip over the digipak, and you’ll see this artwork on the back: 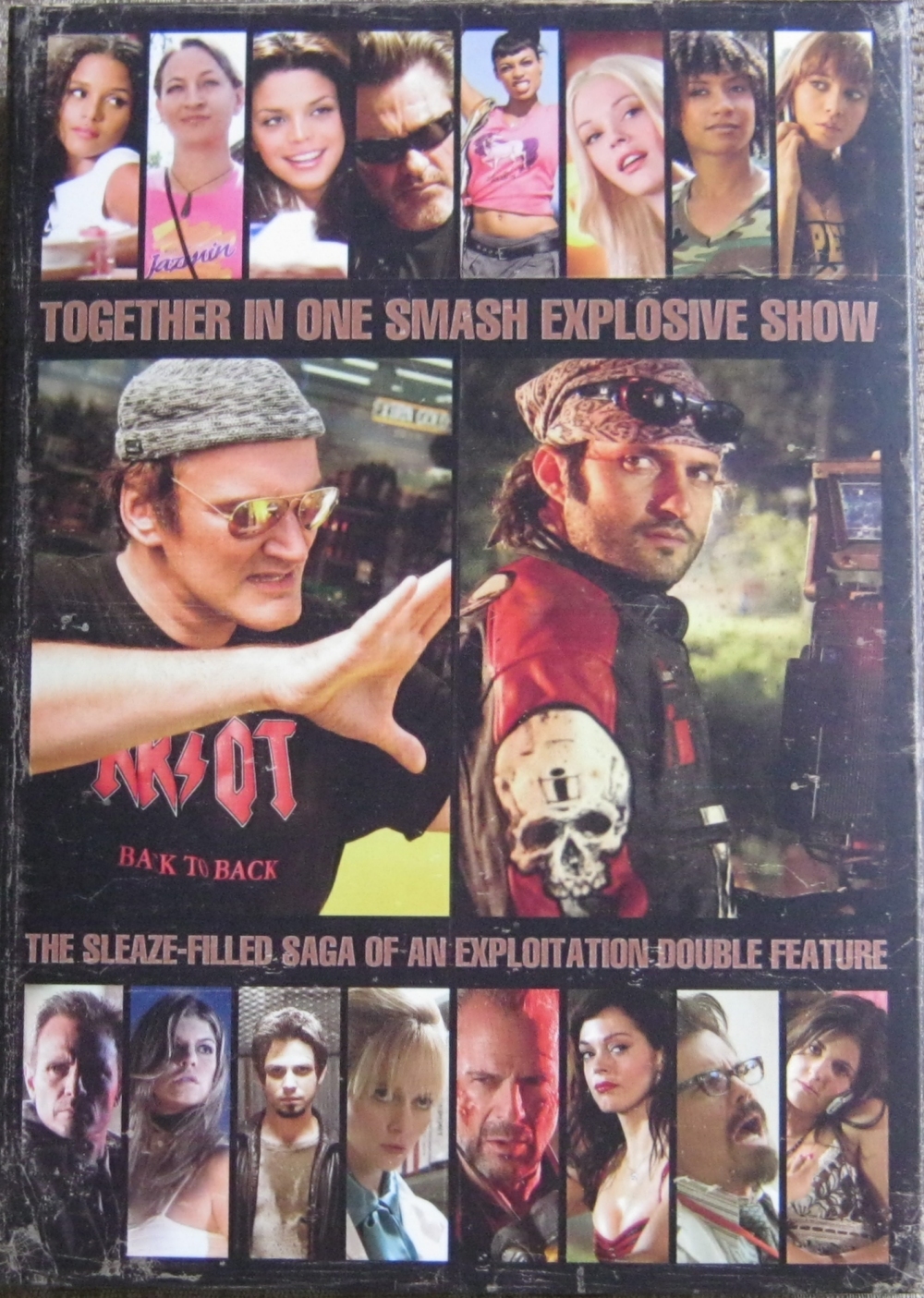 This is the spec sheet and obi strip that wrap around the exterior of the box. The box looks better without this attached, so I just leave it folded up inside. 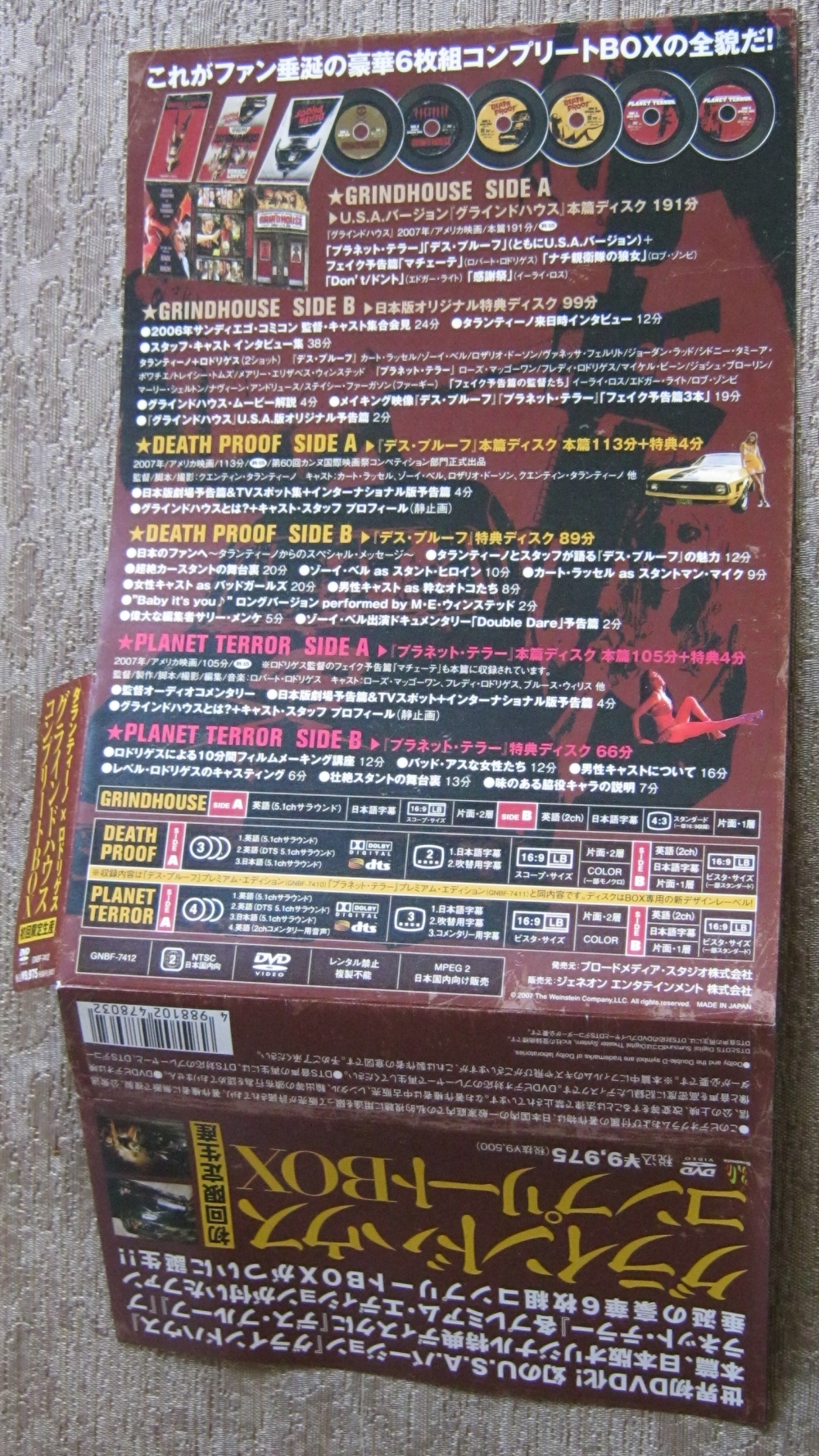 The digipak has three panels that fold out like so: 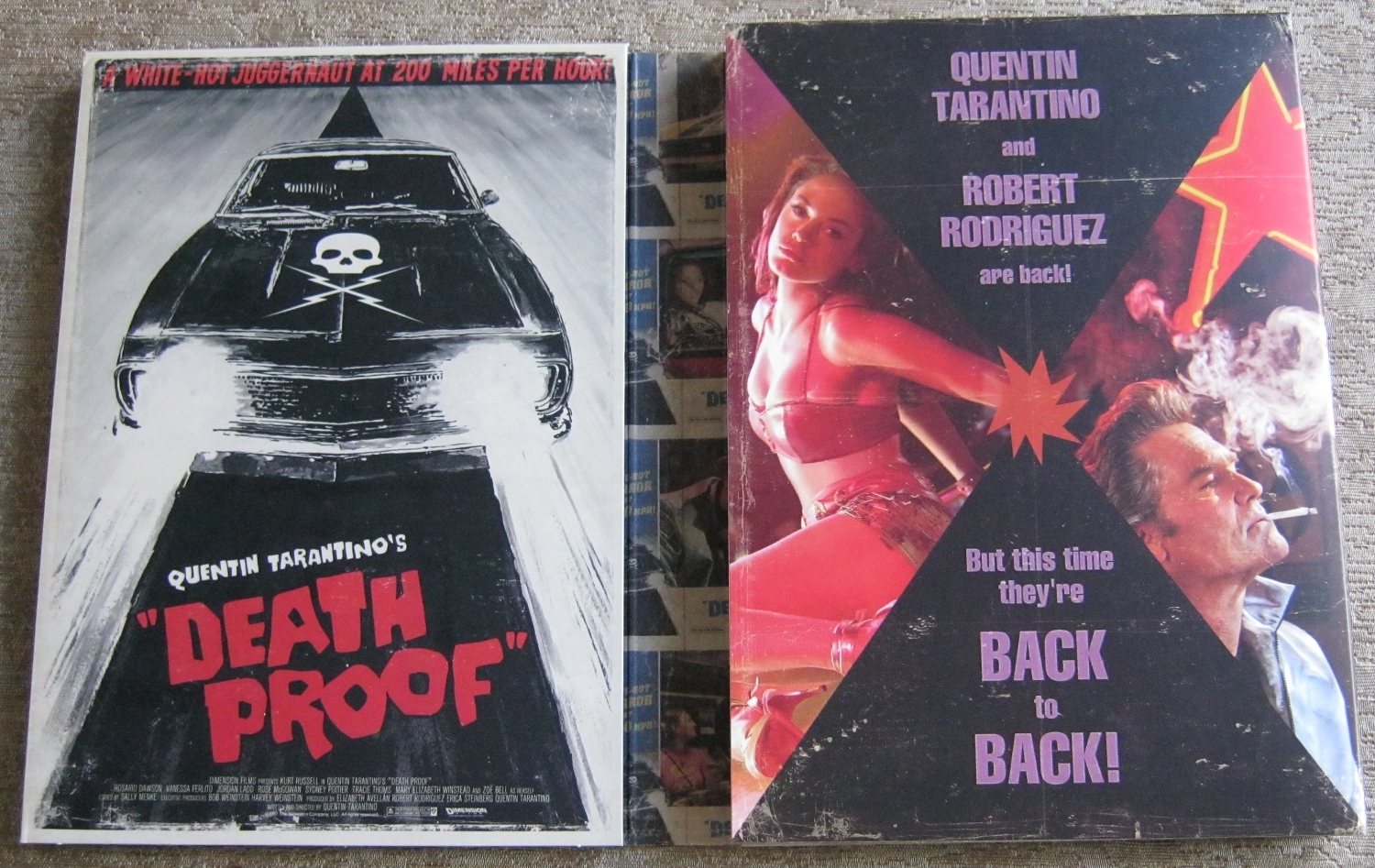 Finally, once you unfold the digipak all the way out, you’ll find the six discs designed to look like LP records, mounted on a wallpaper background with numerous exploitation-themed posters for the movie. I think that this looks pretty awesome. 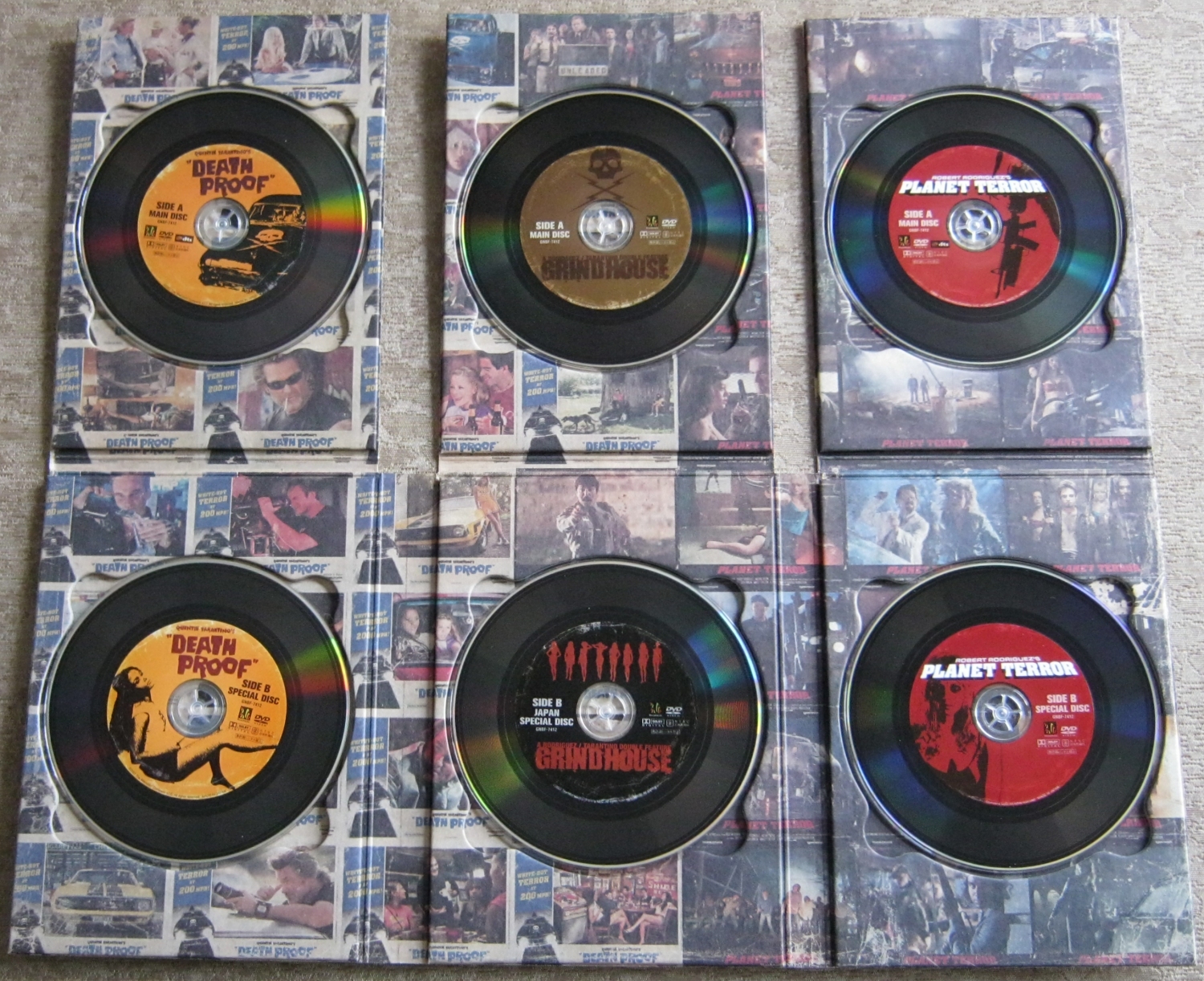 Most of the bonus features from this box set can also be found on the American Blu-ray releases of ‘Grindhouse’, ‘Planet Terror’ or ‘Death Proof’, aside from a few exclusive Japanese interviews with the cast and crew, which aren’t too exciting.

Given that all of the important content is now available on Blu-ray, I’d obviously prefer to watch it that way. However, the Japanese DVD set is still a very nice collectible.