My recent home theater cleaning spree put me in the mood to pull another one of my old movie box sets off the shelf, dust it off, and remind myself why I bought it in the first place. For this new installment in the “Unboxed” series, let’s take a look at the ‘Amélie’ DVD box set from Canada.

It’s a common occurrence that movies released in Canada (especially movies that originate from France) sometimes have different distributors between the English-speaking and French-speaking territories of the country. Often, the Québécois French-specific edition may be released earlier, but will typically lack any English audio, subtitles or packaging. This is done as part of a contractual agreement with the competing distributor, in order to discourage cross-importation of their products.

When Jean-Pierre Jeunet’s wonderful romantic drama ‘Amélie’ was released on video back in 2002, the English-friendly release in Canada was handled by Alliance, whose DVD was a direct port of the Miramax edition from the United States. Meanwhile, TVA Films released this elaborate and quite lovely box set in Quebec. Click on any of the below photos to enlarge. 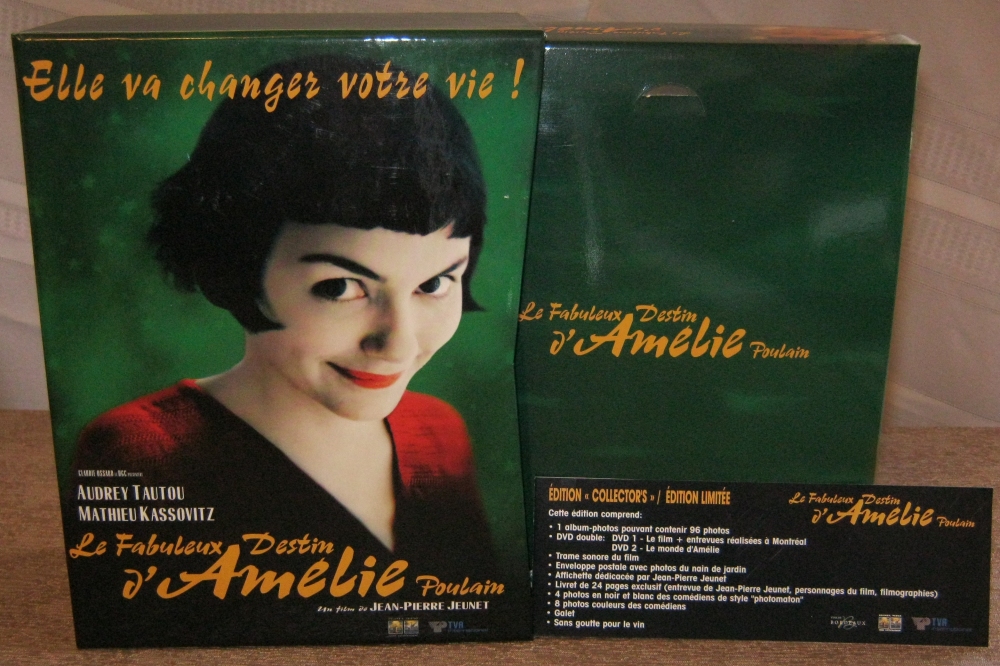 From the thick outer shell, you can slide out an empty photo scrapbook (the Amélie character in the film is obsessed with photos and scrapbooks) and a smaller box made of thinner cardboard material.

Here’s the artwork on the spines of the outer and inner boxes: 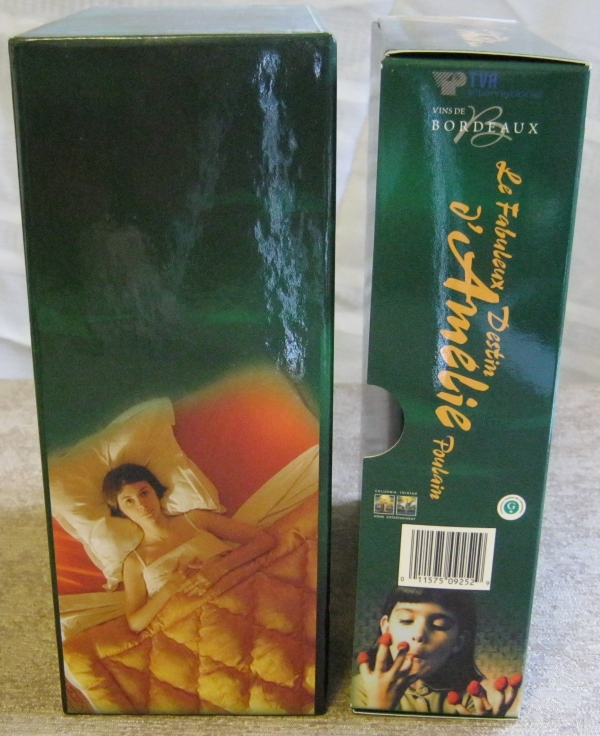 Here’s a better look at the scrapbook: 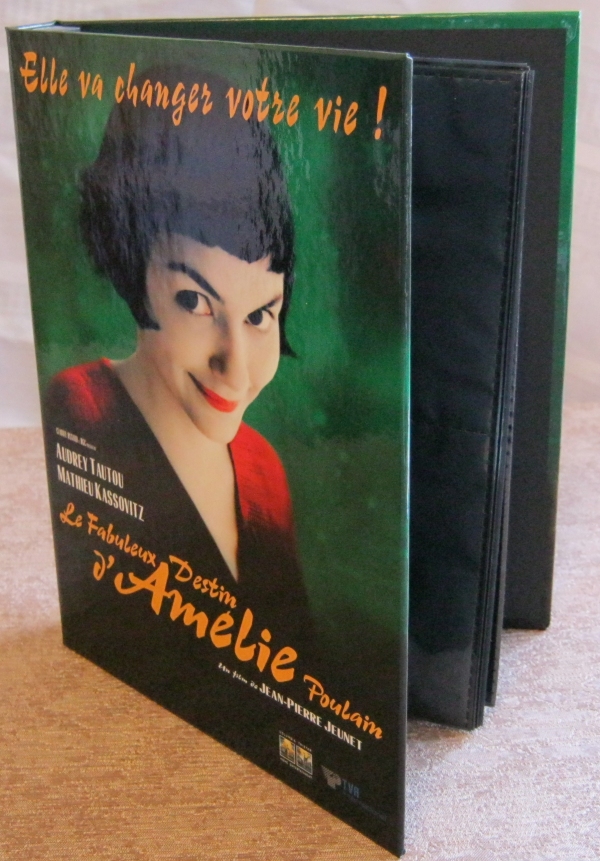 Among the contents of the inner box are a booklet, an art card autographed by Jeunet (it looks like a mechanical reproduction, sadly), a soundtrack CD, an accordion strip of postcards with movie stills on them, and reproductions of the photo-booth pictures seen in the movie. 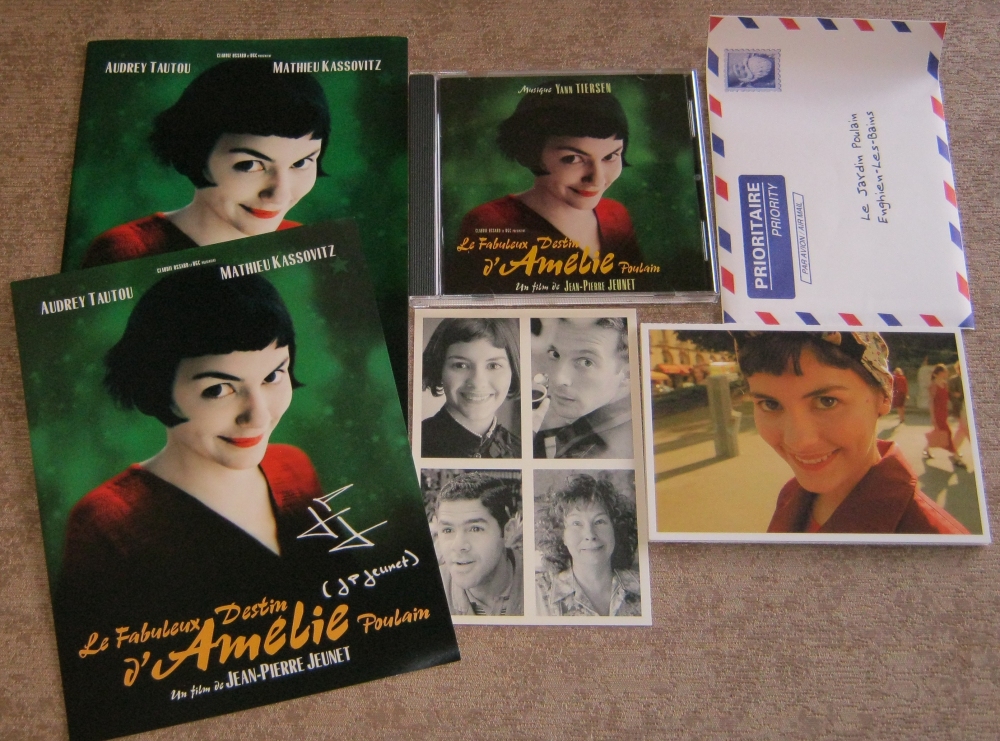 If you recall, the film has a storyline about a stolen garden gnome that gets photographed in many countries around the world. Reproductions of those Polaroid photos are also included in the box. 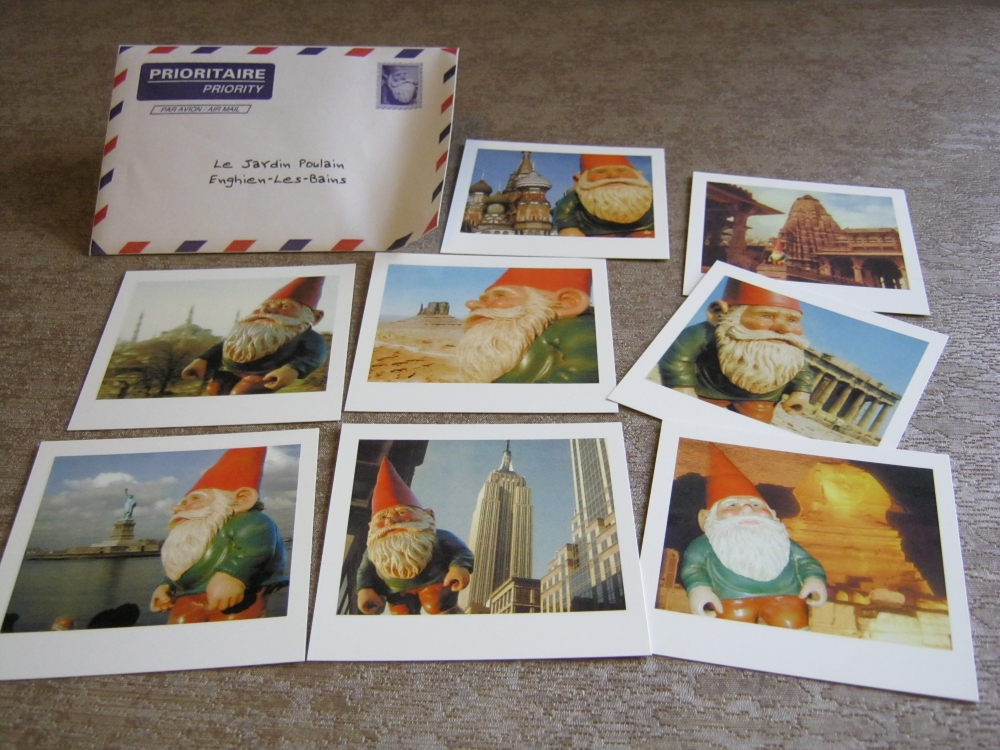 This is the interior of the booklet: 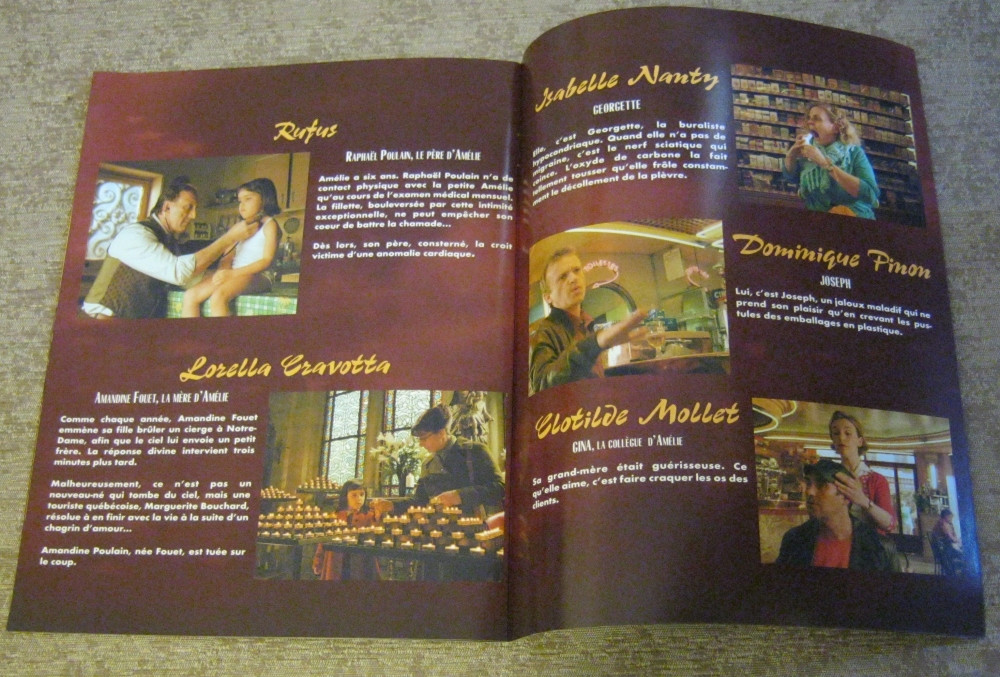 Here are the postcards: 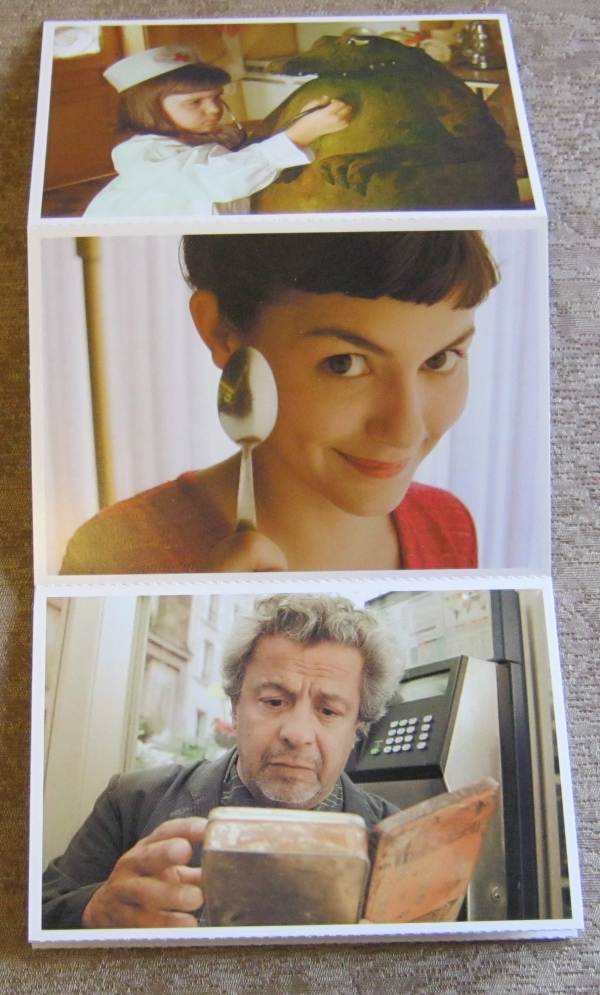 The 2-disc DVD set is stored in a fold-out digipak within a slipcover sleeve. While the interior artwork is quite nice, I’m afraid that the digipak cardboard is very flimsy, and the discs are held by clunky rubber hubs. 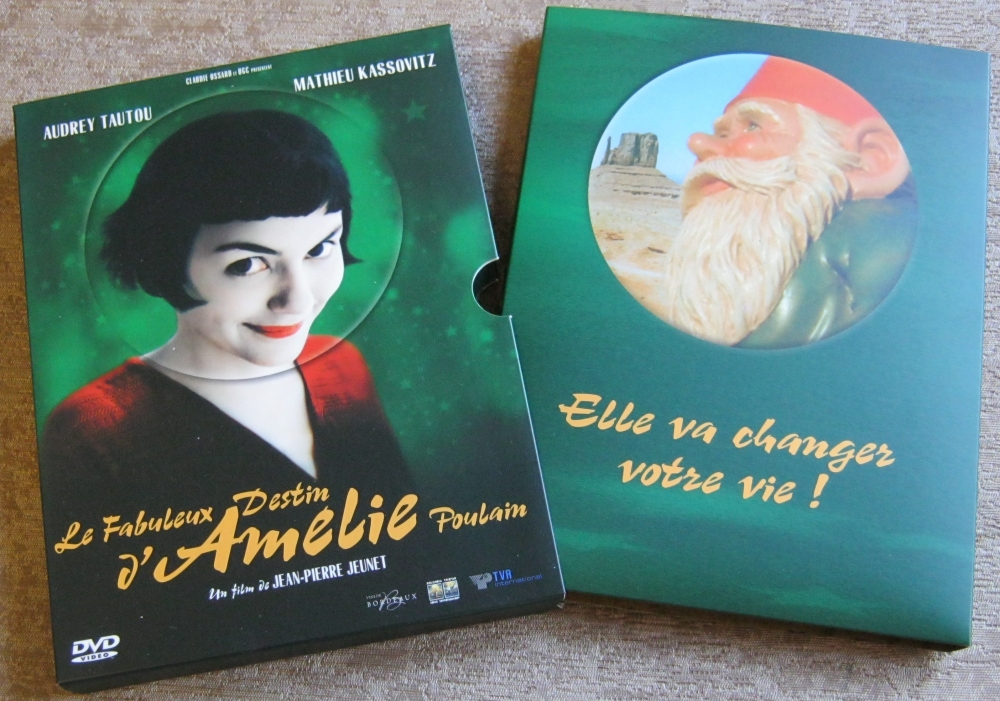 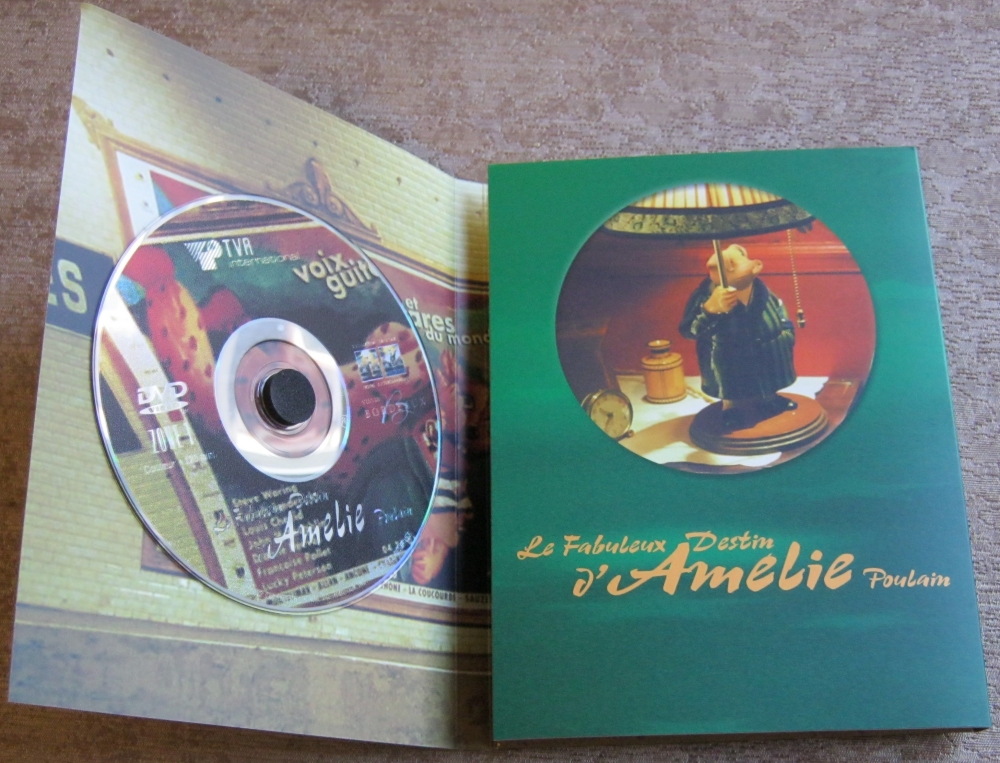 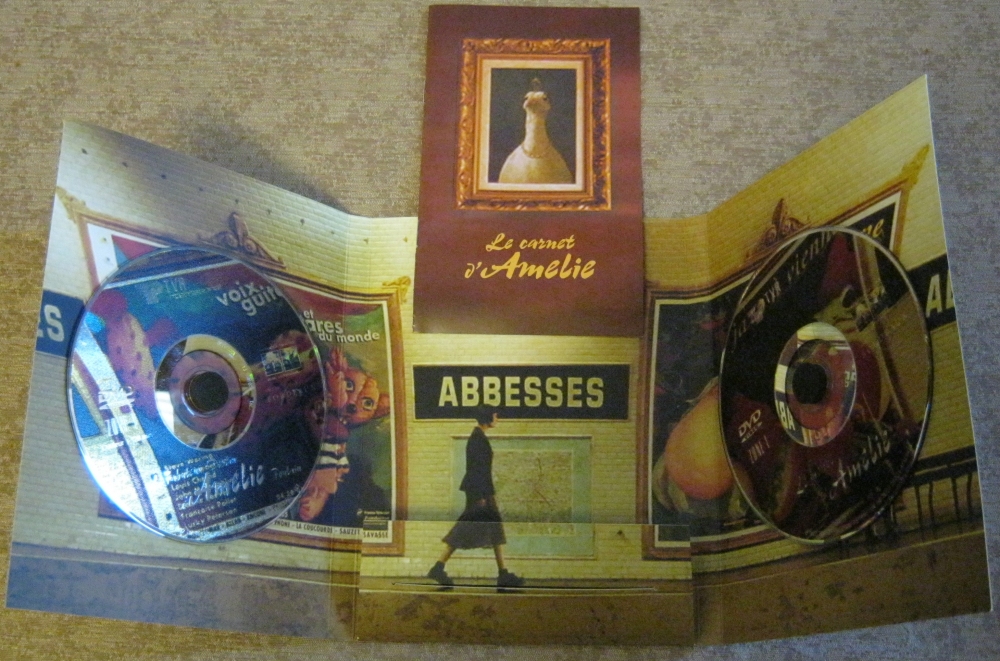 Finally, in a fanciful touch, the box also includes a skipping stone, much like Amélie plays with in the movie. 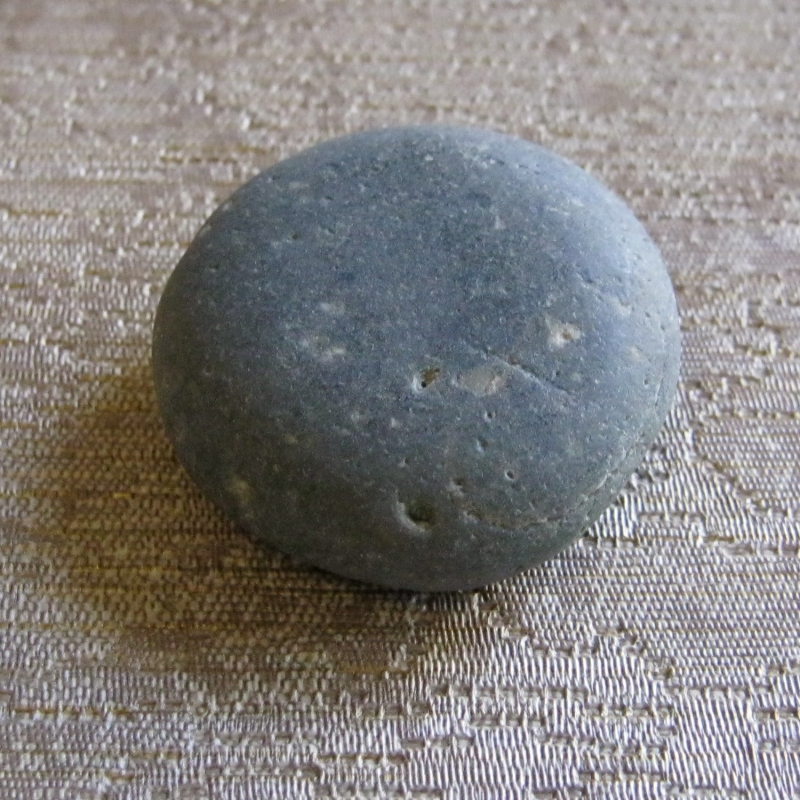 As mentioned earlier, the DVDs have no English audio or subtitles. I bought this box set strictly for the packaging, and had to supplement it with the American DVD (and later Blu-ray) in order to watch the movie.

Aside from that, my only other disappointment with the box set is that the main image of Amélie’s face is repeated so many times among the contents. Some more diversity in the artwork might have been appreciated.