Did director Fritz Lang invent film noir? The Woman in the Window is pretty strong evidence to support that argument. Though Kino’s Blu-ray doesn’t give this stylish, engrossing thriller the restoration it deserves, this tantalizing, textbook noir is just too good to miss.

The Woman in the Window

There’s been a lot of debate about when film noir was born. Some say the first noir was John Huston’s The Maltese Falcon in 1941, while others cite 1942’s Casablanca as the genre’s official debut. Both of those classics are worthy contenders, but I believe the true dawn of noir came a couple of years later, in 1944, when a quartet of iconic movies defined the form and launched one of Hollywood’s most popular and riveting genres. Those four films were Billy Wilder’s Double Indemnity, Otto Preminger’s Laura, Edward Dmytryk’s Murder, My Sweet, and The Woman in the Window, directed by the man who would soon become the genre’s poster boy, Fritz Lang.

If you look at Lang’s impressive body of work, noir elements pervade almost all of it. Yet his distinctive style, influenced heavily by German Expressionism, really came to fruition with The Woman in the Window, which packages all the noir components that distinguished many of his previous films (Metropolis, M, Fury, You Only Live Once, Man Hunt) and presents them in a cohesive, hypnotic manner. Fear, paranoia, isolation, corruption, fatalism, a seductive woman, shadowy photography, inventive imagery… All the hallmarks of noir are here, and they’re all masterfully integrated and executed. If ever there was a film noir blueprint, this is it.

Like Laura, a portrait of a beautiful, mysterious woman is the catalyst for this descent into darkness, but here, the man who falls for the femme fatale isn’t a strapping, handsome, hard-boiled police detective. On the contrary, The Woman in the Window features one of the most unlikely heroes in noir history. Richard Wanley (the last name says it all) is a mild-mannered, urbane, somewhat homely, middle-aged psychology professor who, just as Tom Ewell would do 11 years later in The Seven Year Itch, puts his wife and children on a train for their summer holiday at New York’s Grand Central Station. And just like Ewell, Richard (played to perfection by Edward G. Robinson) soon gets involved with his fantasy girl… but she’s a far more lethal cocktail than Marilyn Monroe.

After complaining to his men’s club cronies about the “solidity” and “stodginess” that creep into life after age 40, Richard becomes transfixed by the portrait of a breathtaking woman in a gallery window. Moments later, the ravishing woman who posed for the painting (Joan Bennett) appears before him. They strike up a conversation and go out for a drink. When he takes her home, she invites him in. He hesitates at first, then throws caution to the wind (big mistake!). As they innocently chat over a nightcap, the woman’s jealous lover, a burly older man, suddenly breaks into the apartment and attacks Richard. After a desperate struggle, Richard grabs a pair of scissors and kills the man in self-defense.

The logical next step would be to notify the authorities, but this is film noir, so the characters don’t act rationally. Fearful the police won’t believe the truth, Richard devises a plan to dispose of the body, and believes his tenuous connection to the woman and her lover won’t be discovered. Of course, nothing goes as planned (nothing ever does in film noir), and Richard soon finds himself trapped in his own deceitful and ever-tightening web.

What The Woman in the Window does especially well is foster a sense of foreboding and doom as it methodically depicts how one wrong move, one careless decision can forever change your life and even seal your fate. A few steps out of his comfort zone leads Richard down a path of destruction and despair and turns a law-abiding, upstanding citizen into a desperate fugitive willing to go to extreme lengths to save his skin. Richard could be any one of us, and that everyman quality makes his predicament so unsettling.

Robinson manifests all the conflicting emotions in a natural, understated fashion, while Bennett, with her black hair, dulcet tones, and sexy demeanor, makes a terrific noir heroine. Together they create an unusual and surprising chemistry that was so potent Lang would rekindle it the following year, casting Robinson and Bennett in what would become another classic noir, Scarlet Street. Dan Duryea, who excels here as an oily, cocky blackmailer, would appear in that film, too.

The only problem with The Woman in the Window is its ending. Like several pictures of the period, the conclusion was changed due to censorship issues. Though many at the time regarded the revised denouement as clever, it feels like a cheat today. It’s tough not to draw parallels to The Wizard of Oz and a very famous shower scene on the primetime TV soap Dallas, but the ending does effectively release tension while lending the film a whimsical finish and giving Robinson’s character an appropriate coda.

The abrupt shift in tone and mood is a bit jarring, but when you think about it, what is film noir really but an elegantly crafted, often Freudian nightmare? In supremely fine fashion, The Woman in the Window – one of the genre’s quintessential specimens – hammers that vital point home.

The packaging proclaims this Blu-ray edition of The Woman in the Window has been “newly mastered in HD,” but while the clarity and contrast of the 1080p/AVC MPEG-4 transfer is quite good, plenty of imperfections plague the print, which is in dire need of restoration. Like many independent productions of the period, The Woman in the Window hasn’t been particularly well cared for over the years, so we’re lucky it looks as good it does. Still, a jarring splice, intermittent image instability, both black and white vertical streaks, and the usual age-related marks and scratches often disrupt the film’s tense mood and distract us from Lang’s artistry. Grain is evident but nicely resolved, so the picture maintains its film-like feel, blacks are appropriately rich (though a few scenes appear a bit washed-out), details are well defined, and grays are varied enough to provide necessary texture. The close-ups of Bennett are wonderfully glamorous, but the tight shots of the far less attractive Robinson err on the fuzzy side. (Whether that was an intentional choice by Lang to soften the actor’s appearance remains a mystery, but it makes sense.) When it looks good, this transfer looks very good indeed – vibrant, silky, and seductive – but the source material is just problematic enough to make the overall presentation disappointing.

The DTS-HD Master Audio mono track is free of hiss, pops, and crackle, and the full-bodied sound enhances the film’s atmosphere. Subtleties like rain and footsteps come through cleanly, a wide dynamic scale serves Arthur Lange’s Oscar-nominated music score well, and the literate dialogue of Nunnally Johnson’s script is always clear and comprehensible.

Supplements are slim. An audio commentary by film historian Imogen Sara Smith, the film’s original trailer, and previews for a handful of other Kino Lorber Studio Classics releases are the only extras. 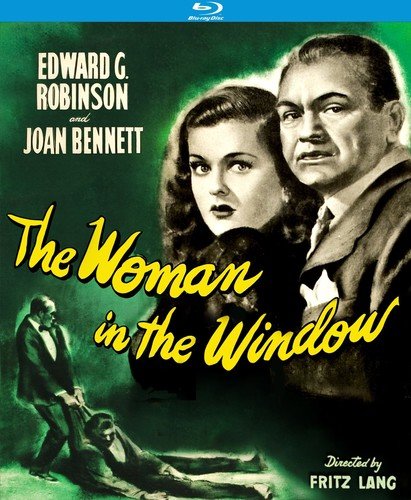